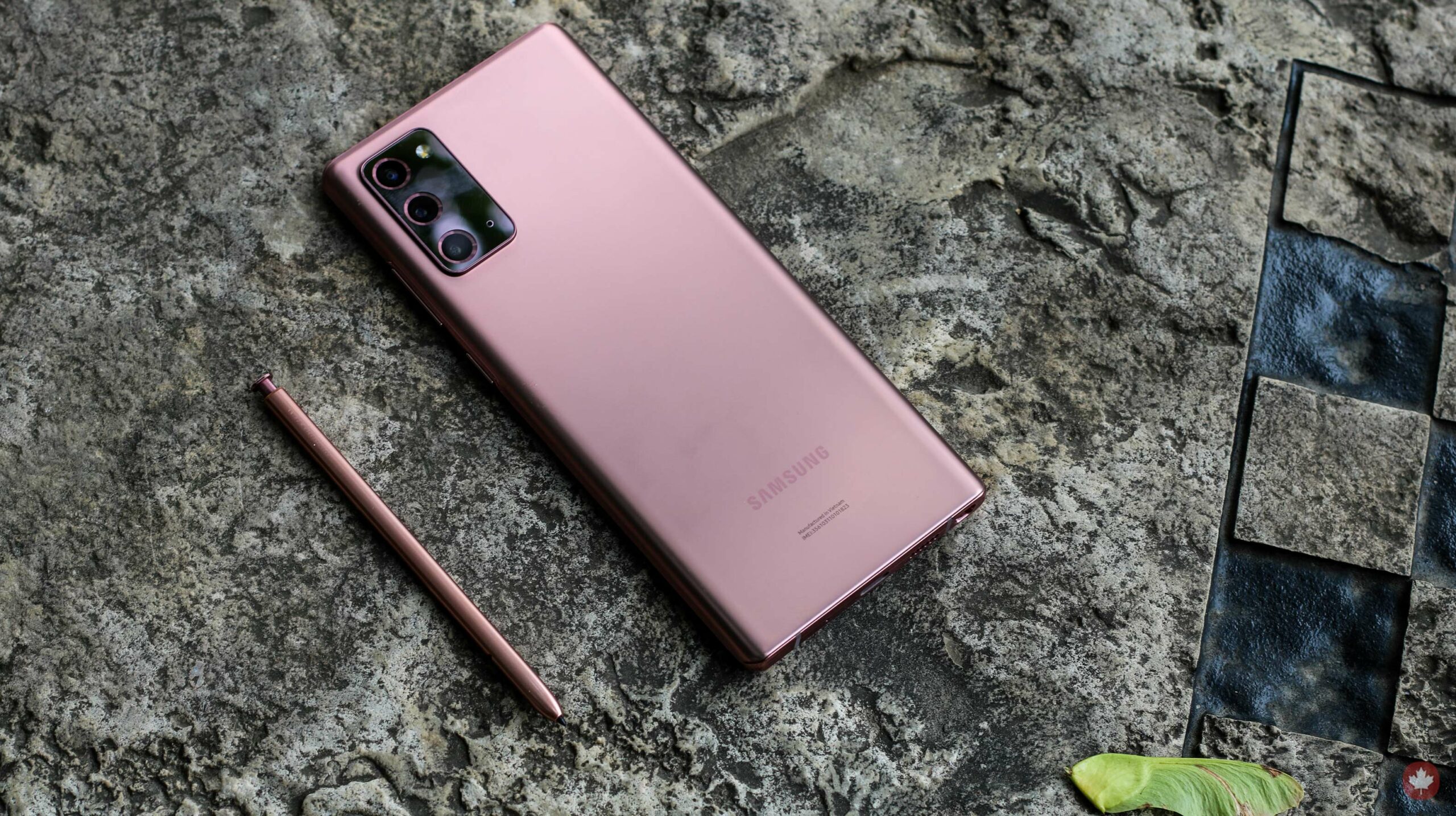 The Note series is in an awkward position given Samsung’s S-series handsets are now so large and also still offer top-of-the-line specifications. However, the Note series comes with the S Pen stylus that many — not including myself — really value.

Rumours suggest that next year Samsung might launch an S21 smartphone with an S Pen, which means the Note 20 and 20 Ultra could be the last Note series smartphone ever — and this is a good thing as far as I’m concerned.

While the Note 20 Ultra is a great smartphone, the device is expensive, especially when compared to last year’s Note 10+. On the other hand, the cheaper Note 20 is a nearly complete downgrade when compared to the Ultra.

Samsung’s Galaxy Note 20 is cheaper than the Note 20 Ultra, and sports a price tag of $1,399 CAD outright if you purchase the device directly from Samsung. This pricing is especially strange when you consider that you can currently buy the much-better Galaxy S20+ — which I gave a 9/10 back in February — for $1,329. It might seem like you’re paying more for the S Pen when actually, you’re shelling out the additional cash for the arguably unnecessary Snapdragon 865+ processor.

With all of this in mind, Samsung’s Galaxy Note 20 is receiving a lot of deserved criticism, but the average consumer probably won’t find it’s that bad of a smartphone. That said, there are several better flagship handsets options currently on the market. 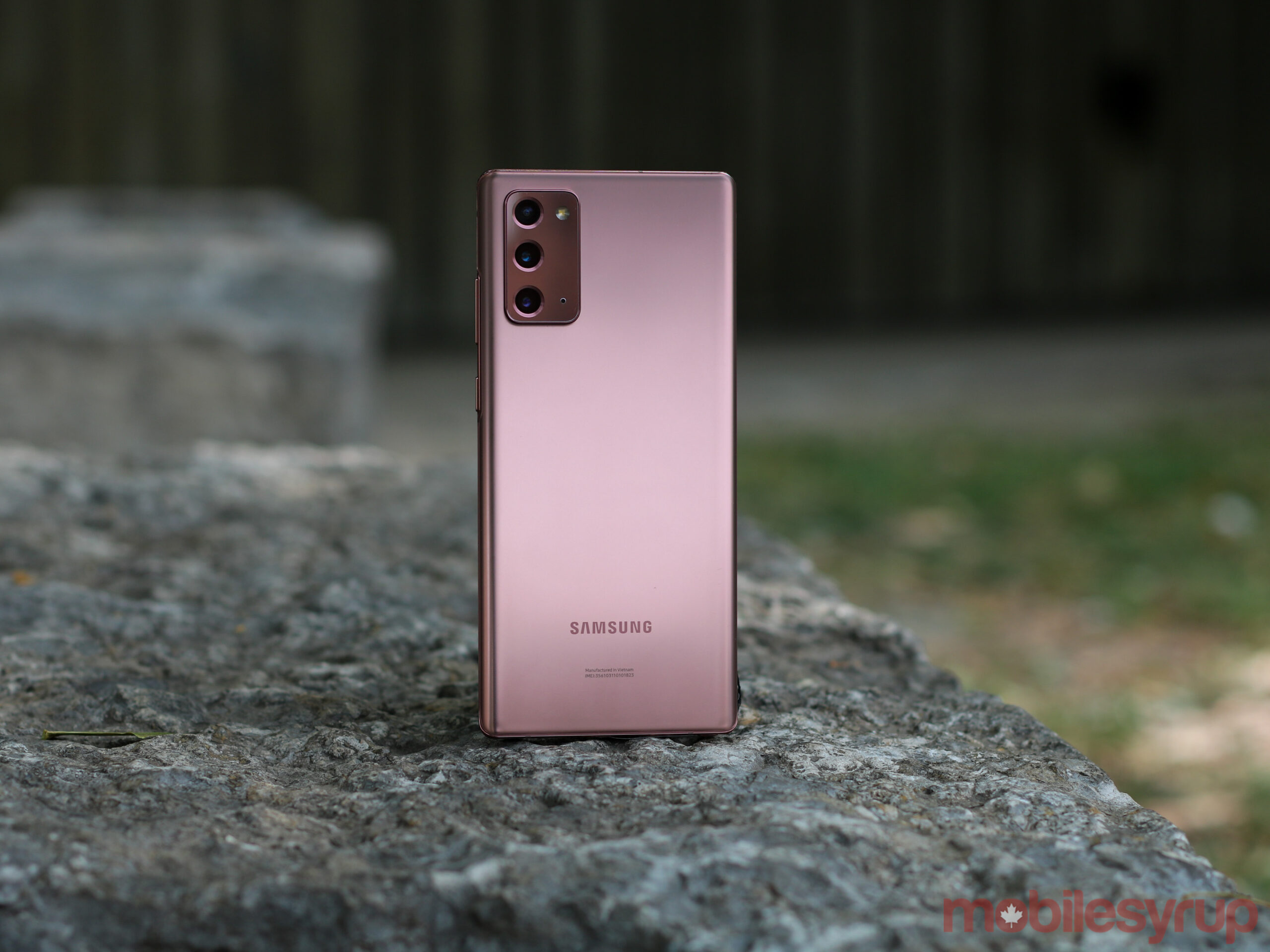 The Galaxy Note 20’s front looks modern and elegant. The smartphone features a rectangular, symmetrical design that includes Samsung’s ‘Infinity-O’ display, which is fancy branding for a screen with a hole-punch cutout. The cutout is a bit bigger than what is featured in the Note 20 Ultra, but it doesn’t feel too big.

On the bottom of the device, there’s a speaker, a USB-C port and an S Pen located on the left side. There’s also the volume rocker and the power button on the right side of the smartphone. When you flip the phone to the rear, there’s a large camera module that’s slightly smaller than the Note 20 Ultra’s and similar in size to the S20+’s. I’m using the ‘Mystic Bronze’ Note 20, and what I like is that Samsung matched the camera bump’s colour to the rest of the phone, which helps improve its look when compared to the S20 Series rear array.

Overall, if you’re just looking at the Note 20, the device appears solid, but touching the handset is an entirely different story. 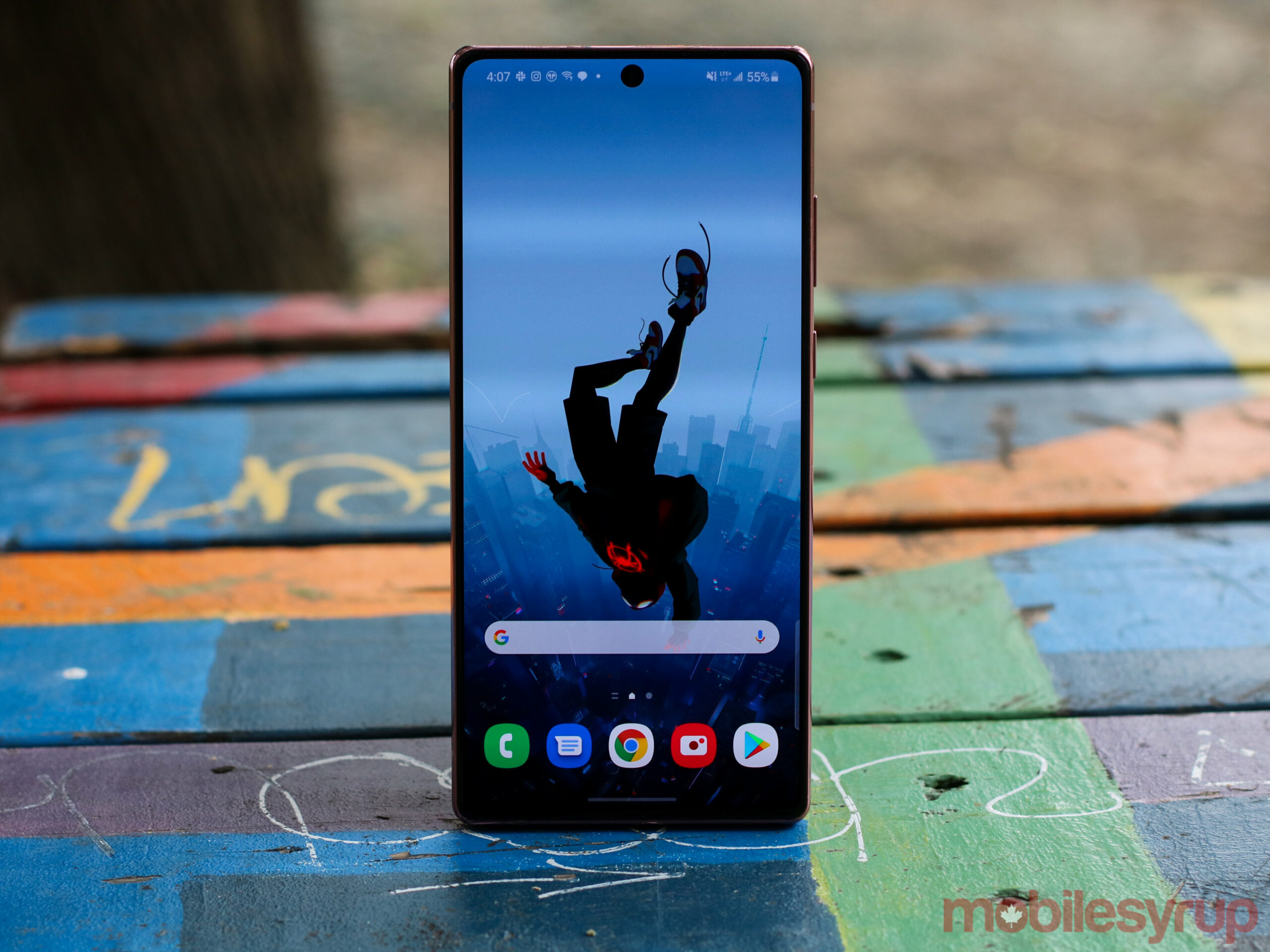 The rear of the Note 20 is made of a cheap-feeling plastic material that is strange to see in a 2020 smartphone. At first, the back reminded me of the Pixel 4 series, but on closer inspection, the Pixel 4’s matte plastic-like glass material feels a lot more premium. Samsung likely did this to keep the smartphone’s cost down. However, for $1,400 CAD, the handset needs to not only appear premium but also feel like it’s worthy of that expensive price tag. To be fair, this isn’t an issue everyone will notice.

On the plus side, this plastic material doesn’t attract fingerprints, and I find that I only managed to get smudges on the back if I recently applied lotion to my hands. Overall, the decision to feature a less high-end feeling back on the Note 20 is a misstep on Samsung’s part. 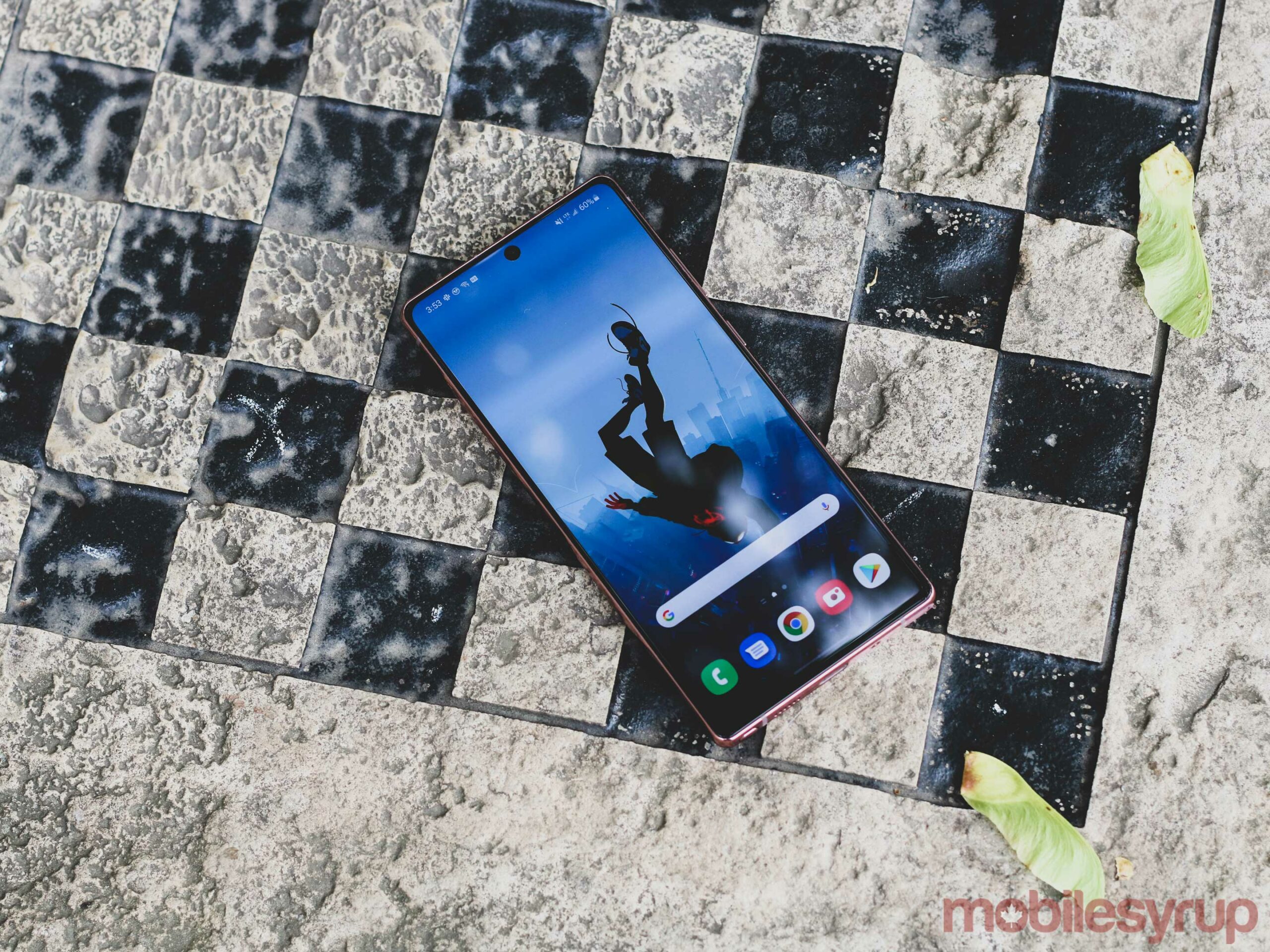 Beyond the design, the first thing a lot of people notice about a smartphone is its display. The Note 20’s screen isn’t bad, and to my eye, there’s nothing significantly wrong with it. Viewing content always looks good, games like Limbo are still dark and dreary, and overall, the screen offers a solid viewing experience — but this is only if you don’t know what you’re missing out on.

The S20 series and Note 20 Ultra both feature displays better than the Note 20’s screen.

To start, Samsung’s Galaxy Note 20 offers a 1080 x 2400 pixel resolution, which is inferior to the 3200 x 1400 resolution available on each of Samsung’s S20 series smartphones. It’s also not as good as what’s the Note 20 Ultra offers, either. This may not be noticeable at first, but when you hold the two devices side-by-side, you’ll really see the difference.

Another miss on Samsung’s part is that the handset only features a 60Hz refresh rate. Smartphones like Google’s Pixel 4 series, the OnePlus 8 series, Asus’ ROG Phone 3 and 2, Asus’ ZenFone 7, Samsung’s Galaxy S20 series, Samsung’s Note 20 Ultra and more, all sport a refresh rate of at least 90Hz. I expected Samsung to also bring a higher refresh rate display to the Note 20, especially considering many of the above phones cost just as much and, in some cases, less than this smartphone. 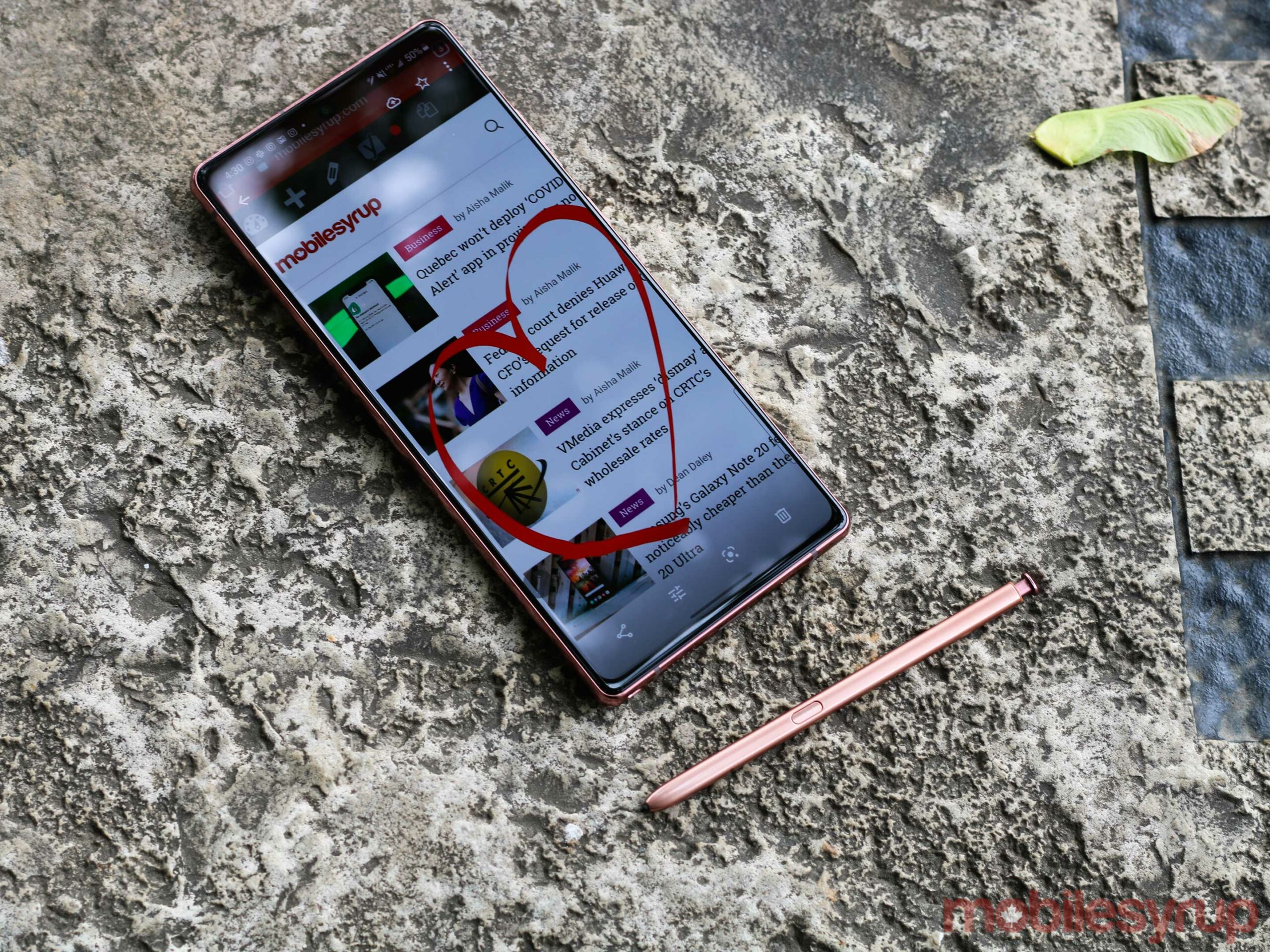 The S Pen is the Samsung Galaxy Note series’ trademark stylus. While this is my first experience with the S Pen, I’ve used a smartphone that features a stylus before. Back in 2018, I went hands-on with the LG Q Stylo+. In comparison, the Note 20’s S Pen feels a lot better, but given the Q Stylo is a much cheaper mid-range smartphone, that isn’t an impressive feat.

Is the Snapdragon 865+ really worth it? 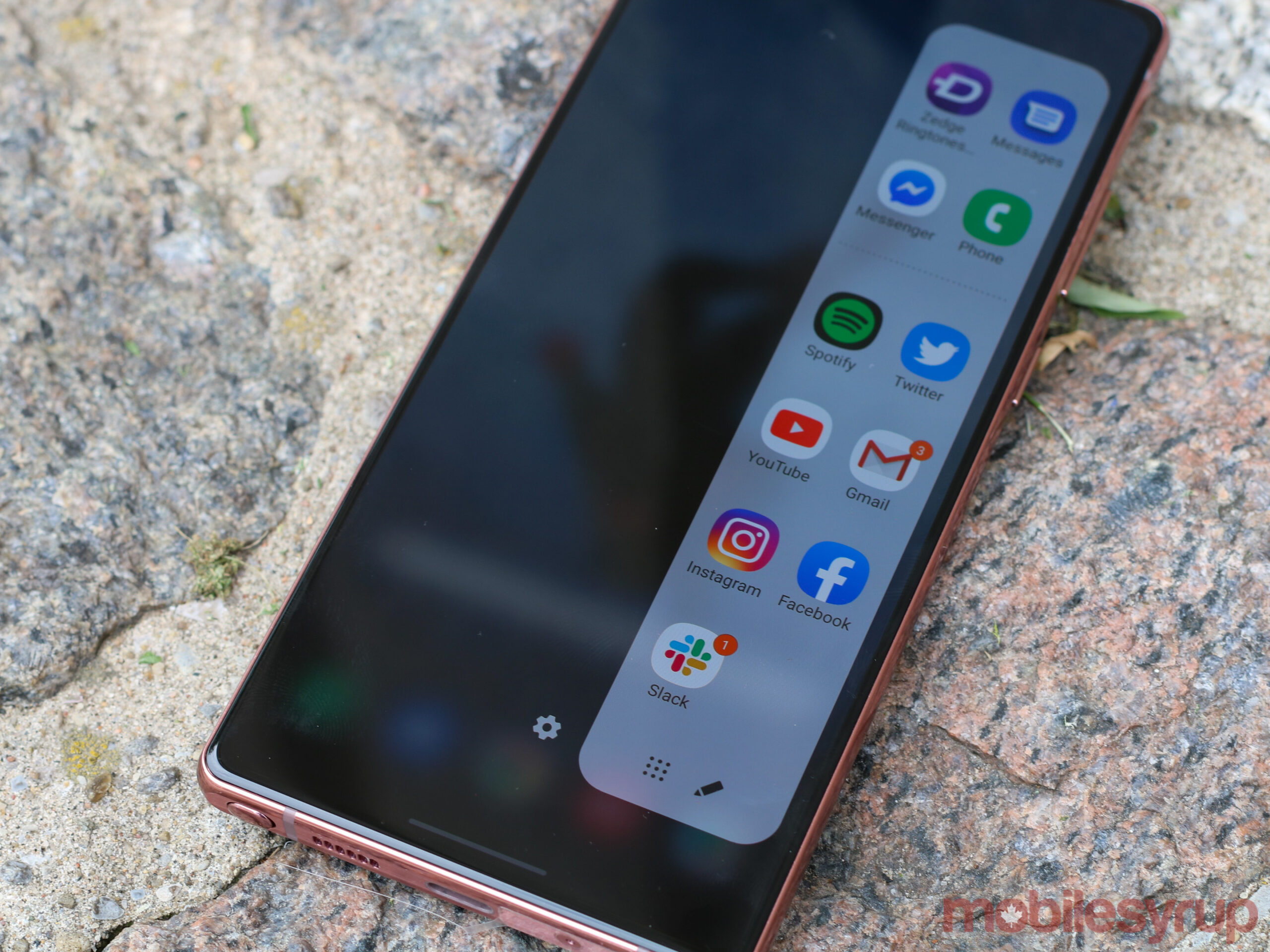 Speaking of battery, the Note 20 sports a 4,300mAh cell that, for the most part, can get through a day easily. On days where I go to the gym and watch Crave and Netflix while running, or have to Hotspot because my home internet is down, I still find that the Note 20 can last until at least 10pm. The phone doesn’t feature the best battery life out there, but it gets the job done.

One of the reasons why the Galaxy Note 20 is so expensive is its 865+ processor. The Snapdragon 865+ chipset is more powerful than the original Snapdragon 865 that’s available in devices like the Samsung Galaxy S20 series, OnePlus 8 series and the LG V60 ThinQ. Throughout the entire I’ve used the Note 20, the device has experienced absolutely no issues. It’s always speedy and powerful, whether I was multi-tasking, playing games or just scrolling through Instagram.

However, I don’t think the Snapdragon 865+ processor is worth the price, and I didn’t notice a difference between the speed of this smartphone compared to the S20+ or LG V60 ThinQ. We ran a benchmark test with the Note 20 and the OnePlus 8 Pro with Geekbench. As you can see below, the OP8 Pro didn’t do as well as the Note 20, but unless you’re a major smartphone gamer, It’s unlikely you’ll push the Note 20 to its limits. 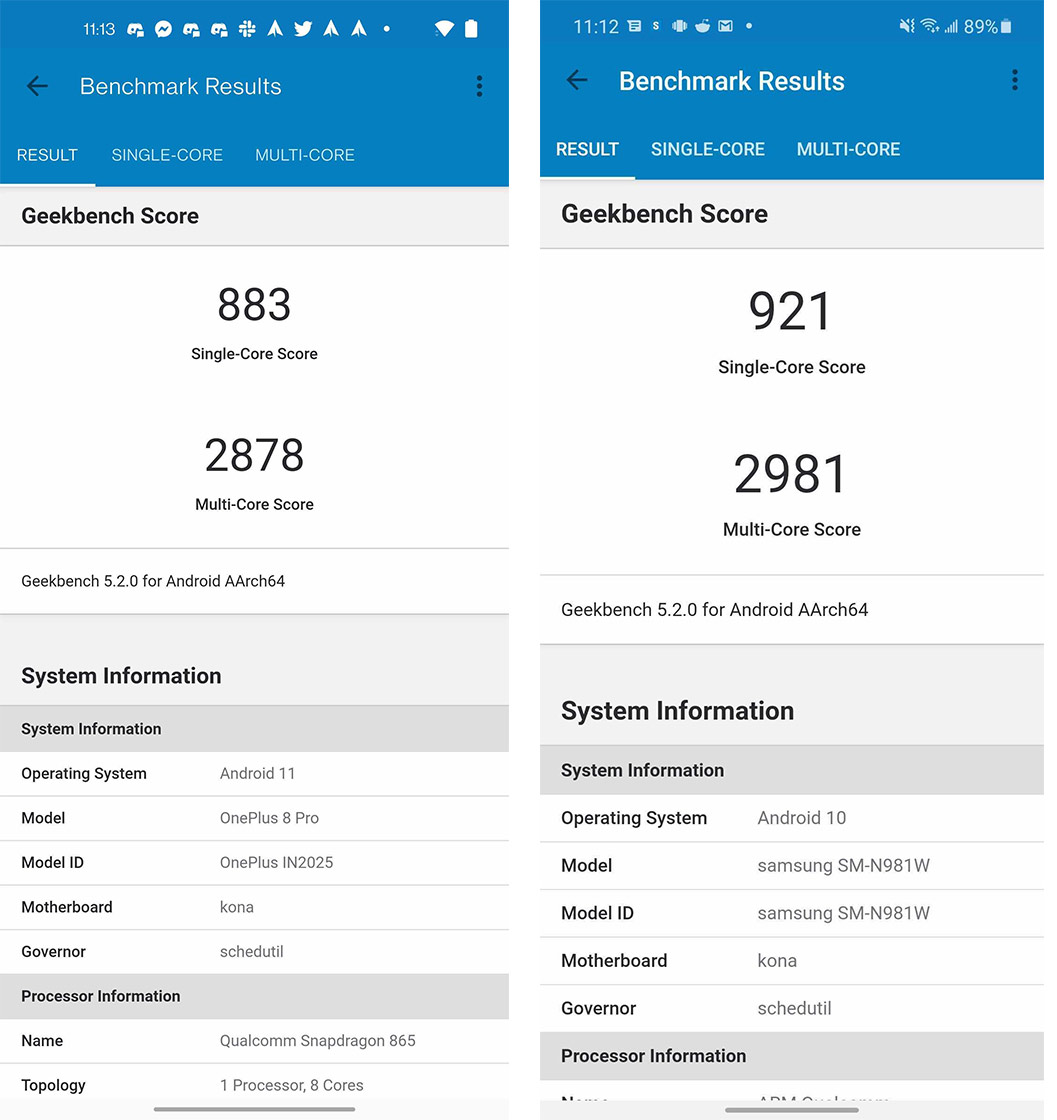 Although it’s a quicker processor, Samsung should have just went with the Snapdragon 865 or even a 765. These are fast and powerful enough chipsets and would have helped keep the cost of the smartphone down. 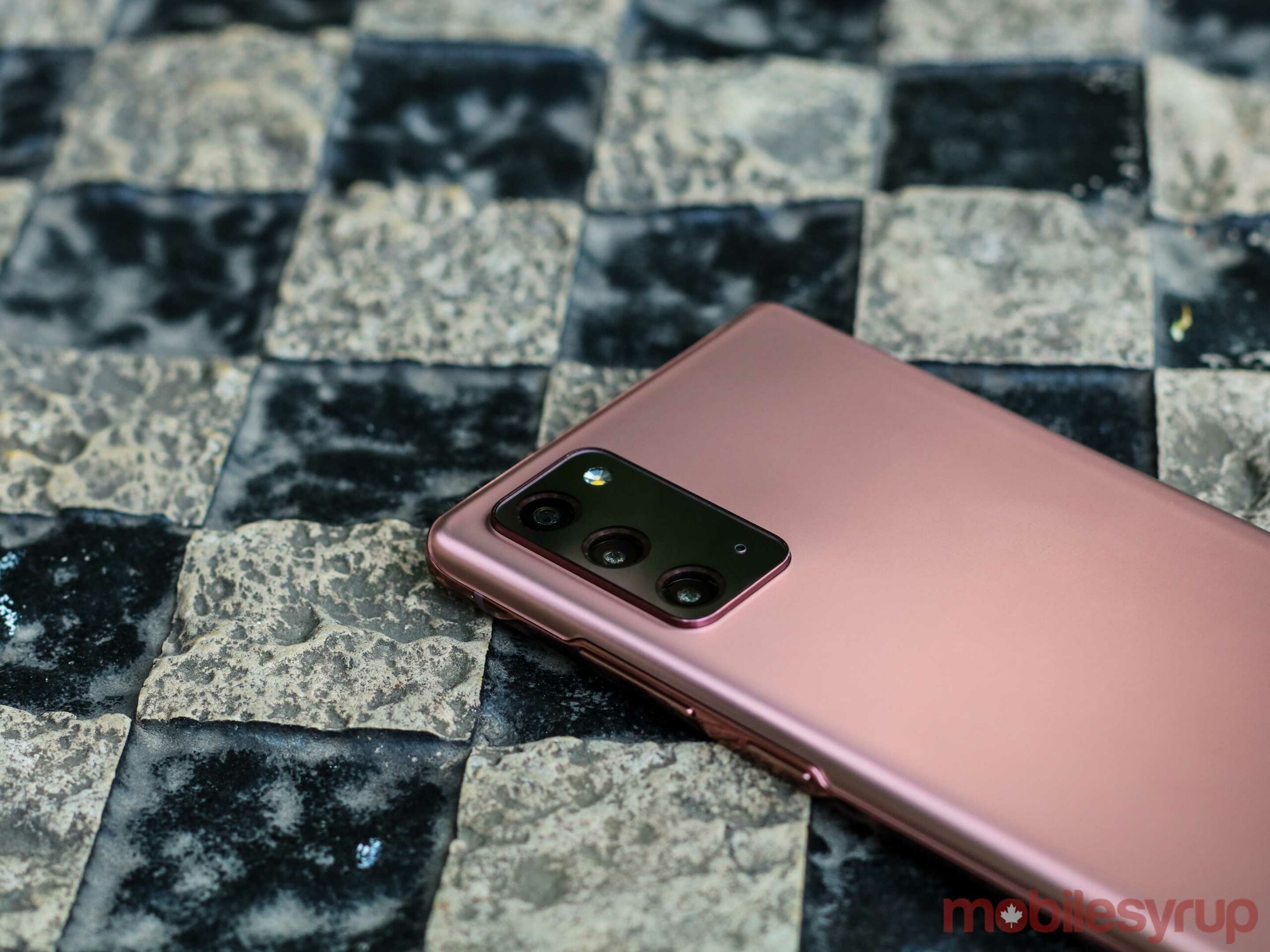 When taking pictures with the 12-megapixel primary shooter, images were clear and detailed, but a bit oversaturated and too vibrant. A photo of the sun setting behind the clouds featured deep contrast comparable to the Galaxy S20+’s cameras or even the Pixel 4 XL. I think there’s a bit too much overexposing of the highlights, however.

Alongside the primary camera, the Note 20’s 12-megapixel ultra-wide shooter also takes impressive shots, offering a decent amount of detail. It’s barely noticeable that you’ve switched cameras. I think the main shooter is still preferable, but the ultra-wide is still quite great.

Last but not least, is the Note 20’s 64-megapixel telephoto lens with 3x zoom. The 3x zoom functionality works great, includes significant detail and is comparable to the Pixel 4’s and S20’s impressive zoom. Sitting down at a patio on Harbourfront, I was able to take a picture of the CN Tower, and while it was a bit grainy, the picture still looked great. The device also has 30x digital zoom, but pictures often looked blurry and lack detail.

Regarding low-light performance, I was impressed by the Note 20’s Night mode, and I think it could easily stand up to phones like the S20+, Pixel 4 XL and the P40 Pro. The Note 20 images aren’t as detailed as Huawei’s P40 or Google’s Pixel 4 XL, but they still look impressive. For example, the photo I snapped of a motorboat on the water looks stellar.

Similar to most other smartphones launched by Asian manufacturers, selfie pictures with the Note 20 often overexpose my skin, making it lighter. Despite this, front-facing camera photos are otherwise pretty good.

To upgrade or not that’s the question 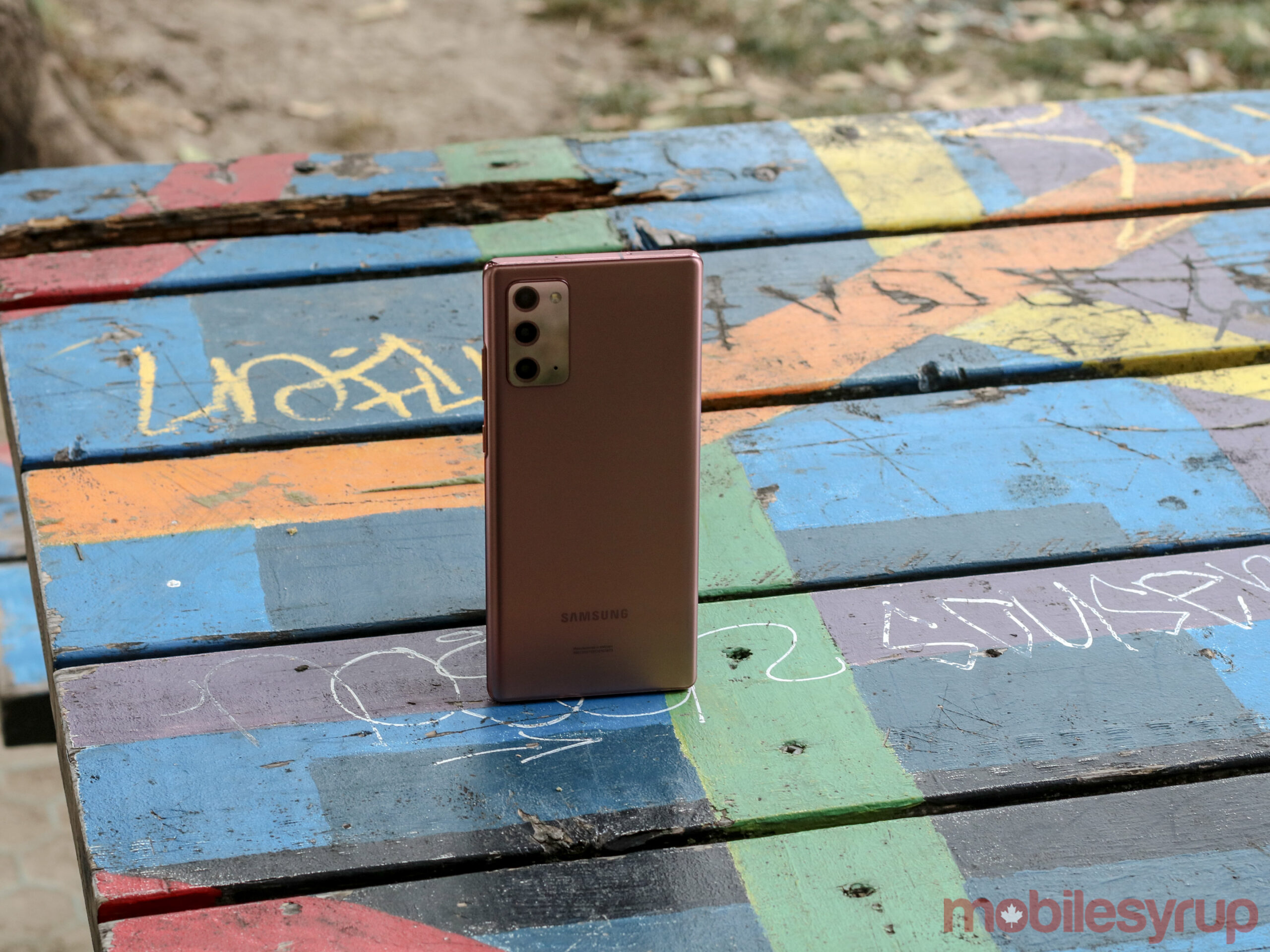 For those who are wondering if they should upgrade to the Note 20 from a recent Note device, the quick answer is no. The Note 20 isn’t a bad smartphone, but that doesn’t matter because there are more affordable, better options on the market.

If you’re someone who’s concerned with 5G and don’t value the S Pen, take a look at the Samsung Galaxy S20+ — a phone that I personally consider absolutely phenomenal — which currently costs $1,329. And if money is not a problem, just upgrade to the Note 20 Ultra, which Patrick O’Rouke described as one of “one of the most solid smartphones Samsung has ever released.”

Samsung's Galaxy Note 20 isn't a bad smartphone, but it's just not worth its expensive price tag.

While I could probably say the same thing about most modern high-end smartphones, the Note 20 takes things to the extreme. If someone wanted a new Samsung flagship, I'd definitely tell them to purchase the S20+, especially now that it's $70 cheaper and offers better specs where it counts -- especially if you're not a mobile phone gamer.

If Samsung launched the Note 20 with a Snapdragon 765G processor, a more high-quality rear and a camera array similar to the S20+'s, it would be a much better device to recommend since it'd be more affordable. I hate to say it, but the Galaxy Note 20 is mostly a miss for the South Korean tech giant.

"I hate to say it, but the Galaxy Note 20 is mostly a miss for the South Korean tech giant"