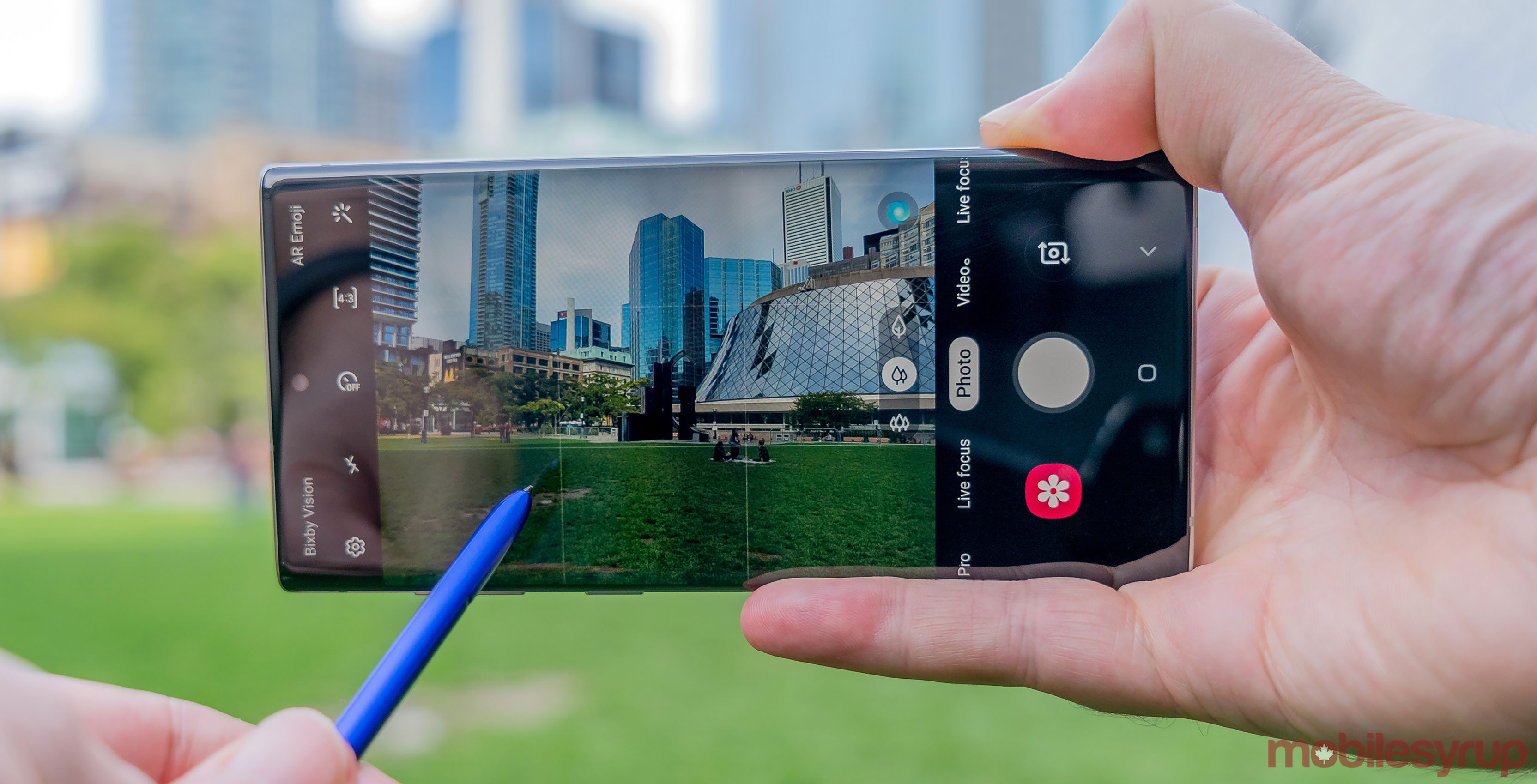 In most cases, especially in recent memory, Samsung has tried to add something to the Galaxy Note that was missing from the Galaxy S. With the Note 10 and Note 10+, that’s not necessarily the case.

Rather than try to add a tangible or functional change, Samsung opted to harken back to an earlier time where gimmicky features reigned. Many of said features back then were since abandoned, never to be further developed for lack of traction. It’s a circumstance that comes to mind with some of what the Galaxy Note 10 and Note 10+ have to offer.

What Samsung introduced in the Galaxy S10 lineup made its way to these phones, maintaining the strong iterative tie between them. What’s different is a new set of options and modes designed to complement the existing camera. The third ultra-wide lens is also in the rear, adding an additional perspective, but there was an opportunity to do something more here.

Shooting with both Note 10 devices offered plenty of familiarity, albeit with results that could have been tantalizingly better. For everything else about the newest Note 10, MobileSyrup’s Patrick O’Rourke covers all of that.

It’s always interesting to me when a phone gets a noticeable change in form factor, yet doesn’t come with a redesigned camera package. The svelte Note 10 (I’ll refer to both devices by that from here on, unless otherwise noted) is a sweet-looking device, with a cool iridescent back. True, that back also includes the 16-megapixels ultra-wide lens to bring it in line with the Galaxy S10/S10+.

All three lenses are identical with the same image sensors. If Samsung was going to change anything, it would have to be on the software side. Yes, there is the DepthVision camera in the back of the Note 10+ (the Note 10 doesn’t have it), but I’ll get to that later.

Even from a software perspective, the general makeup of the interface and its various modes appear intact. Whatever was brought in for the S10 models is also here, including features introduced in the flagships of 2018. 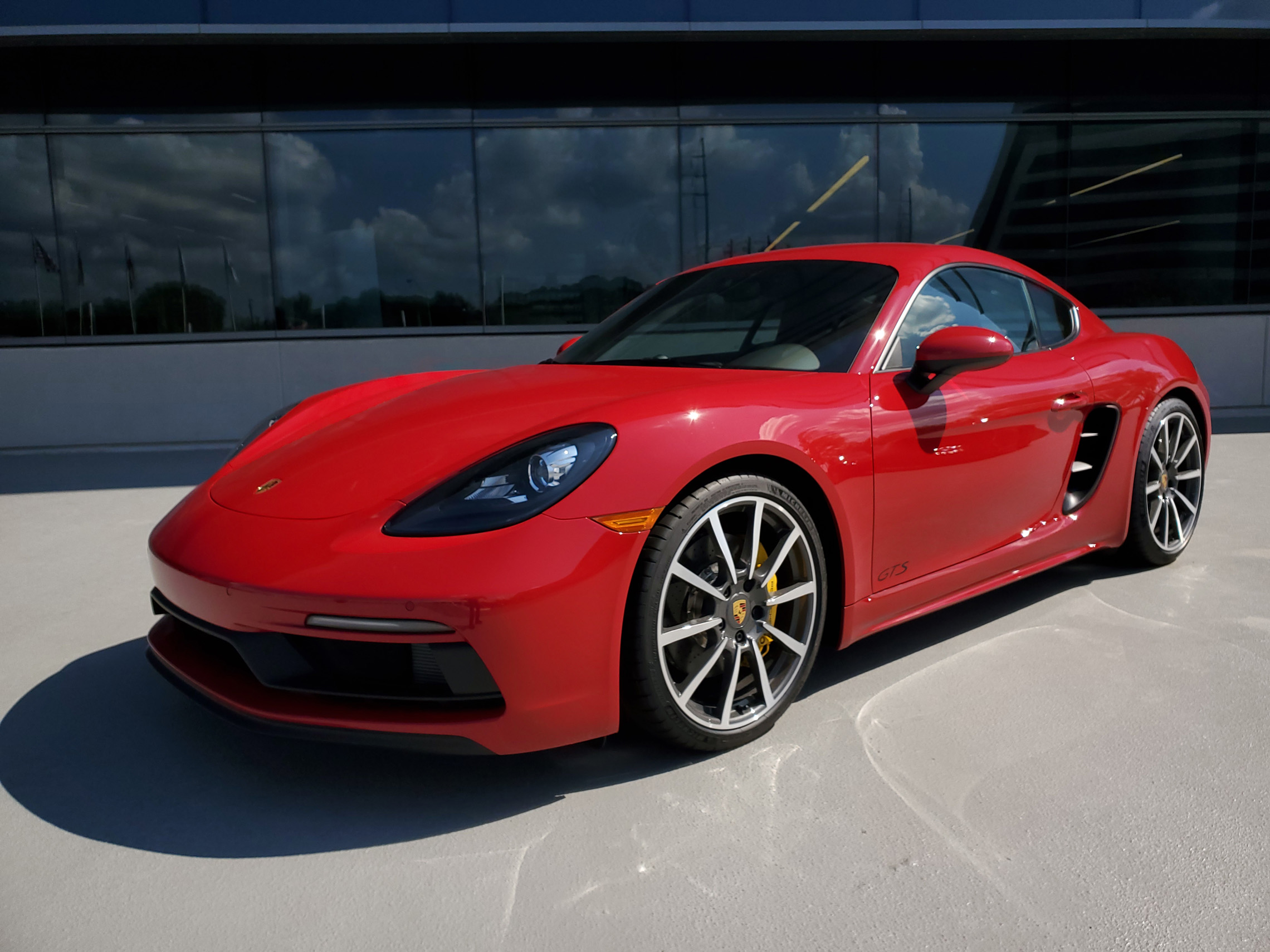 Samsung erred greatly when it didn’t include a Night mode with the S10 phones, only doing so as a software update afterward. The mode finally addressed the elephant that’s been in Samsung’s room going back a long while: low-light photos. Mechanical apertures and AI-driven scene optimizers are nice, except there was no way to emulate a long exposure shot when holding the phone in hand.

Samsung added the ability to shoot with Night mode on all three lenses, rather than only the standard wide lens. It’s a great move, and one that ensures you can theoretically capture any subject in dark conditions.

I do wish, however, there was greater control when shooting with it. Unlike Huawei’s night mode, there is no way to stop the exposure in progress (for less light sensitivity) or adjust ISO and shutter to gain more control over how the exposure will look. Instead, this is the school of ‘just point it at something dark and fire away.’ 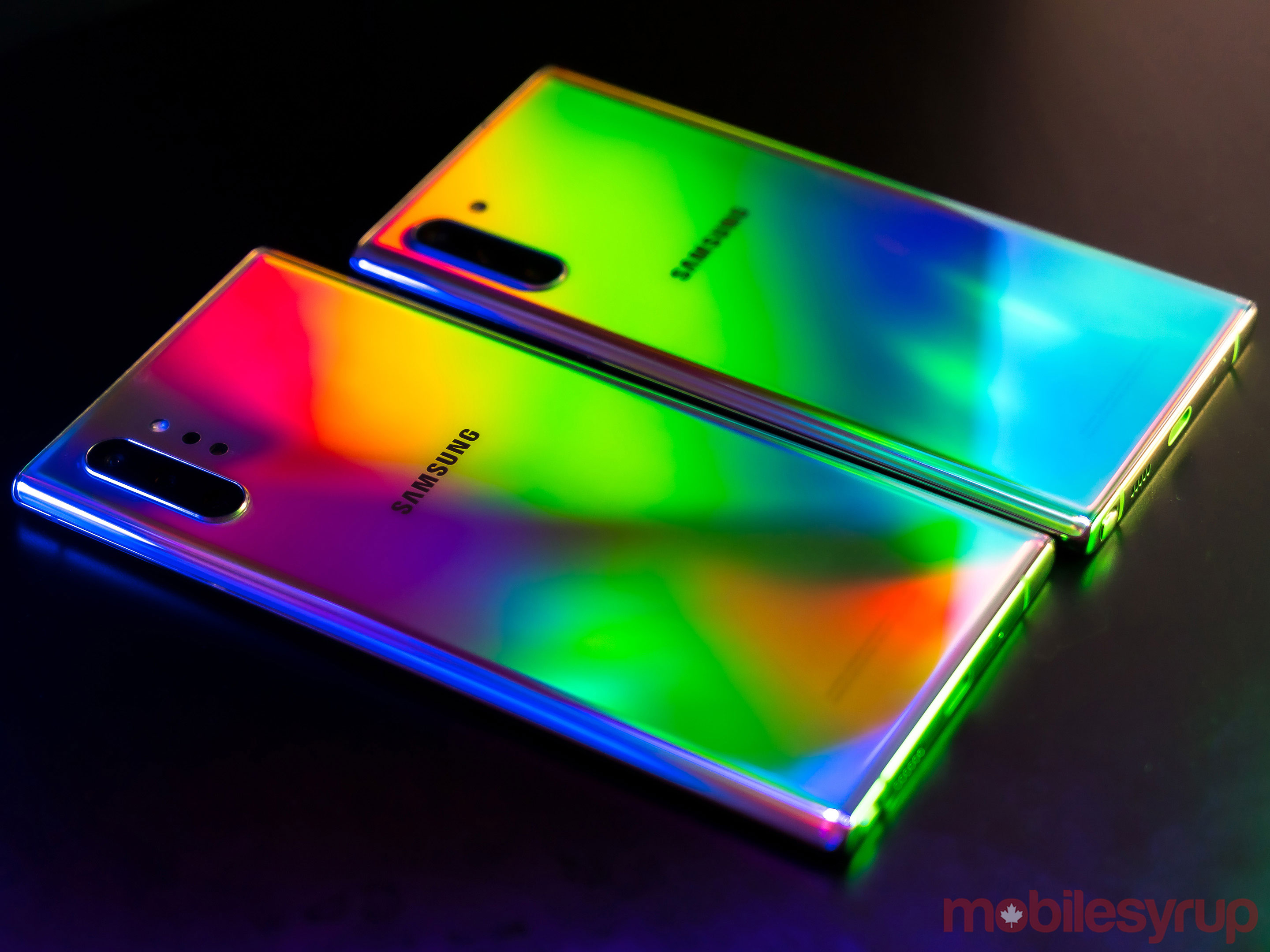 There are still elements to this camera array that irk me, though I recognize my gripes may not be shared by many. For example, for a phone of this calibre and price, I should be able to shoot in Pro mode with any of the three lenses, not just the standard wide one. I also understand that Photo mode automatically selects between the f/1.5 and f/2.4 apertures, but I think that should be elective too.

Samsung quietly made Scene Optimizer available on all three lenses as well — something that was bizarrely missing when the S10 phones launched. The idea is to make it as easy as possible to shoot photos without finagling too much with the options and settings. It recognizes a scene and makes adjustments to maintain dynamic range.

In that regard, the Note 10 performs well, offering a higher level of dynamic range than some competitors do, especially in bright scenes. There is a level of detail that stays intact, where textures and text are visible with well-lit sharpness. Where Google’s Pixel phones are heavier on contrast, and Huawei’s regarding highlights, the Note 10 strikes a pretty happy medium in those scenarios.

That Samsung excels in daytime or good lighting is hardly a surprise. The company has routinely been among the best at shooting great photos in those conditions. Even the Pro mode, which I’ve long touted as worth learning for any interested mobile photography, has plenty of upside. Previous to the Night mode, Pro mode was the best way to shoot in low-light. Even better if you shot it in RAW and then worked on the photo in a post-processing app like Lightroom.

The problem with the Night mode’s dynamic range is that it doesn’t always have a happy medium. For instance, it can sometimes introduce noise in pitch black areas while overcompensating in bright portions. Or it could do the opposite. What you focus on makes a difference. Either way, it’s a mode you should only use for static scenes because moving subjects will blur beyond recognition.

It’s considerably worse with the telephoto lens, but that’s understandable, given the tighter aperture and greater sensitivity to hand shake. The ultra-wide lens offers greater stability, yet at the expense of dynamic colour and tone. 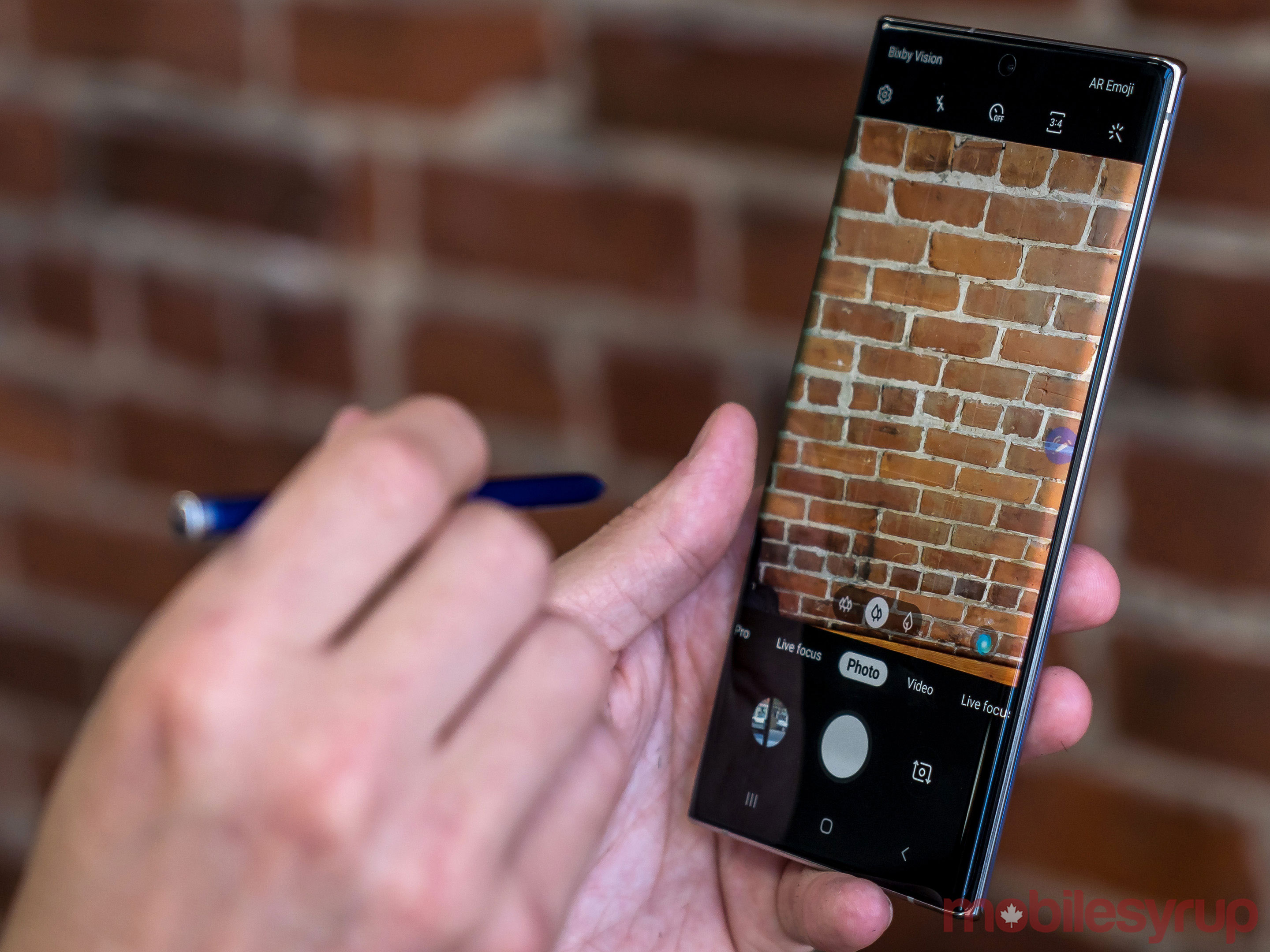 The Galaxy Note 9 introduced the novel concept of making the S Pen a camera tool. It was a great idea, and I put it to good use when shooting photos from tougher angles, or in long exposure shots on Pro mode.

The new gesture controls called Air Actions were designed to control some of the camera app’s interface. It’s an interesting concept, though fraught with inconsistency. A simple swipe up to switch from rear or front cameras was probably the easiest one to pull off. The others, however, not so much.

I could rotate clockwise or counter-clockwise to zoom in or out, effectively switching between the three lenses in the process. When it worked, it was neat, but too often, it simply didn’t register. The key was in holding the pen’s button while doing the action. The phone could only ‘see’ one action at a time. Once I stopped moving the pen, I needed to hold it down again to perform another gesture.

Like anything, it takes some practice to get the timing right, assuming you have the patience to do so. Switching between camera modes is relatively easy, with simple left or right swipes. Selfie fans may like how all this works, but for me, it was mostly about using the pen as a shutter. 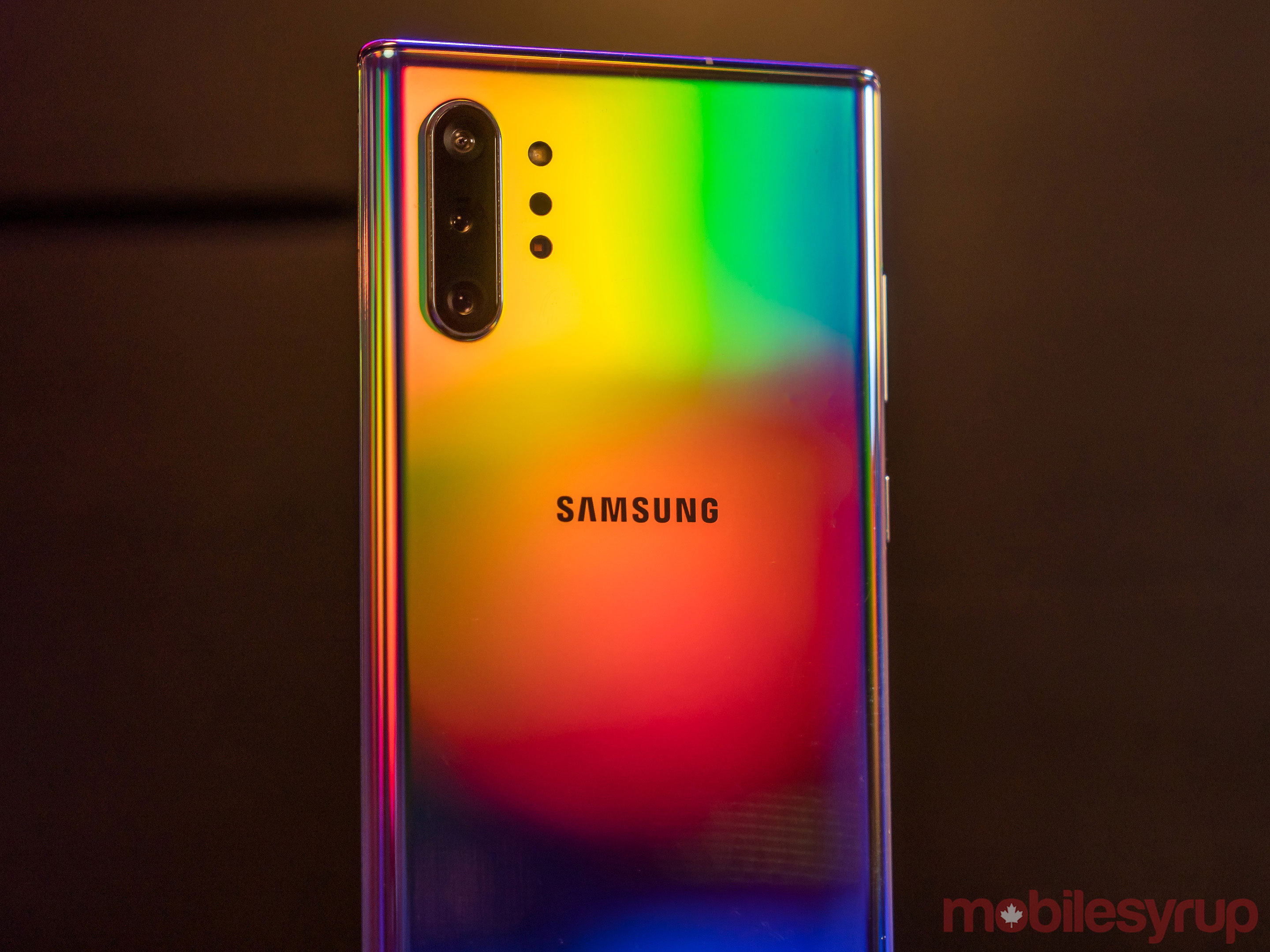 Samsung played up its new DepthVision camera, a Time-of-Flight (ToF) sensor in the rear that is only in the Note 10+. In a nutshell, it uses the speed of light to measure distance, calculating how long it takes for a beam to reflect back to the sensor. The result is an image with dynamic and eye-catching depth of field.

And so, Samsung applied the sensor to shooting in Live Focus, the adjustable depth of field photo mode. It now has a video counterpart, and with the ToF sensor, can offer some unique blur to the background. There are now four different effects, with spin, zoom or a colour point to make them look more dramatic.

What Samsung never mentioned was that this iteration of Live Focus is heavily weighted on faces. It always was, but the problem is there’s little room for creativity when it comes to using it to shoot objects. I tried doing it with a car and it never looked right. 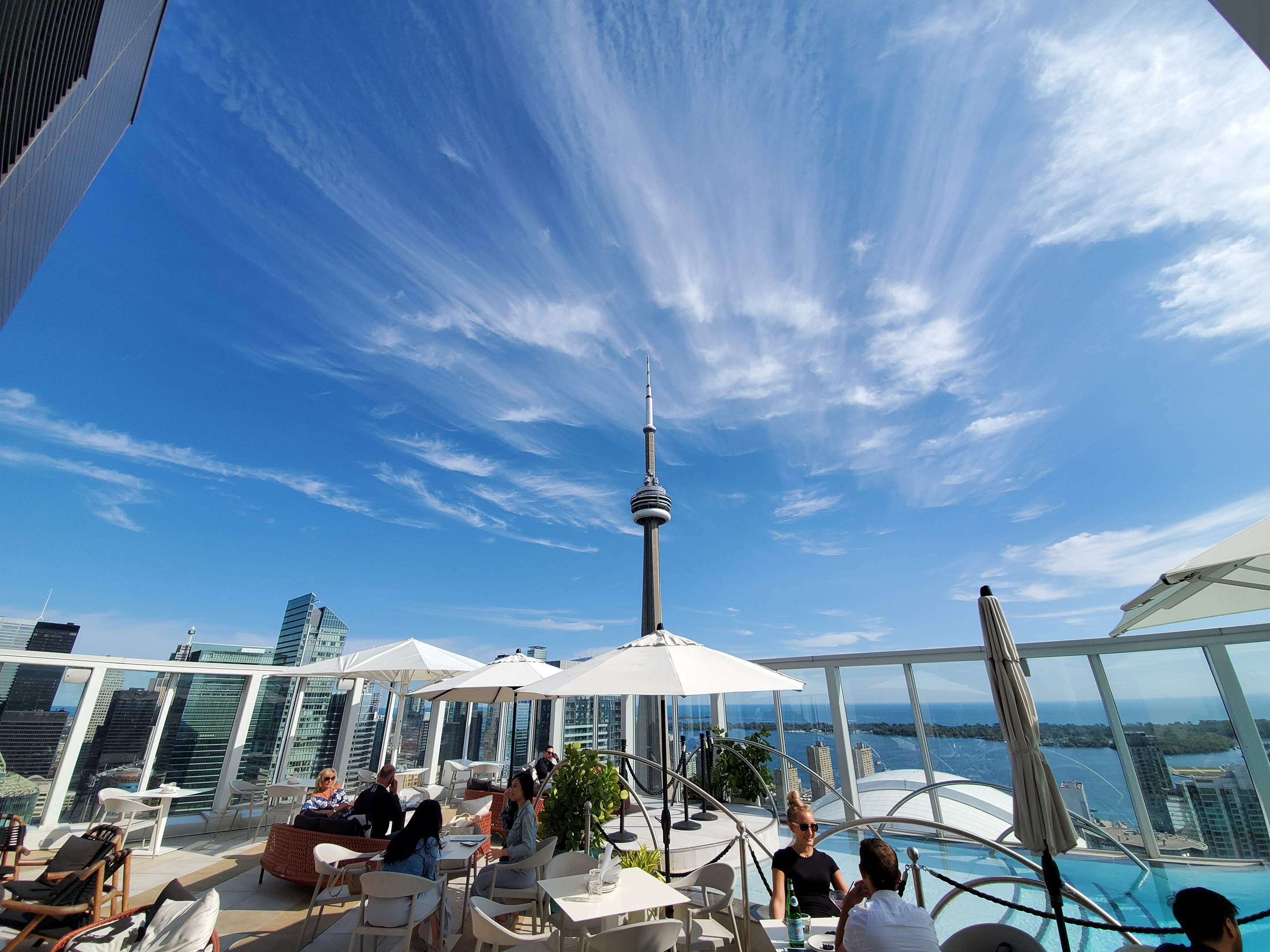 With people, it also had its drawbacks. Strangely, it would try focusing on multiple faces at once, which made the final image unusable. In another instance, the colour point effect colourized an additional person’s face even though they were clearly behind the subject by at least a few feet. Again, not a usable image.

While I like the idea of improving bokeh effects in mobile photography, Samsung needs to figure out how to make it more bulletproof. As is, it feels unpolished and in need of better intelligence to recognize who or what is in a scene.

This camera has bigger implications for AR (augmented reality) capabilities, which is why Samsung ensured there was something to play around with. AR Doodle, the feature that lets you use the S Pen to draw on anything or anyone onscreen and make creations “stick” to the subject, is an acquired taste. I’d prefer to see Samsung implement an extension of the feature whereby a user can draw on an object as a reminder. It could be an appliance at home or something at work.

I mentioned video with the DepthVision camera, but there was also a new addition with Super Steady mode. This is a carryover from the S10 phones, and works in exactly the same way. It basically uses the ultra-wide lens and applies a crop factor to reduce any shakiness when shooting a clip.

Super Slo-Mo mode, much-hyped when the Galaxy S9 launched, is little more than a throw-in now. It maintains the same 720p resolution with a blizzard of grain, making it unusable in anything but bright conditions.

AR Emoji is also still kicking around, though I’m not sure what kind of retention it truly has. This was also a hyped feature going back 18 months to when the Galaxy S9 launched, and despite an effort to drum up third-party support, it seems to be somewhat forgotten.

Much like the Galaxy S10 lineup, Samsung took a cautious approach to the camera with the Note 10 duo, preferring to keep the two close together. The differences between them are about potential rather than actual output, as is the case with the DepthVision camera. Indeed, the new features were less about photos than they were about the act of capturing them.

This places more pressure on the company to not only update Night mode to make it better in the near term, but also come up with something innovative and competitive with next year’s phones. The mobile camera arms race is serving notice to consumers that other brands have something worth looking at.