It's just unclear who the OLED Switch is actually for 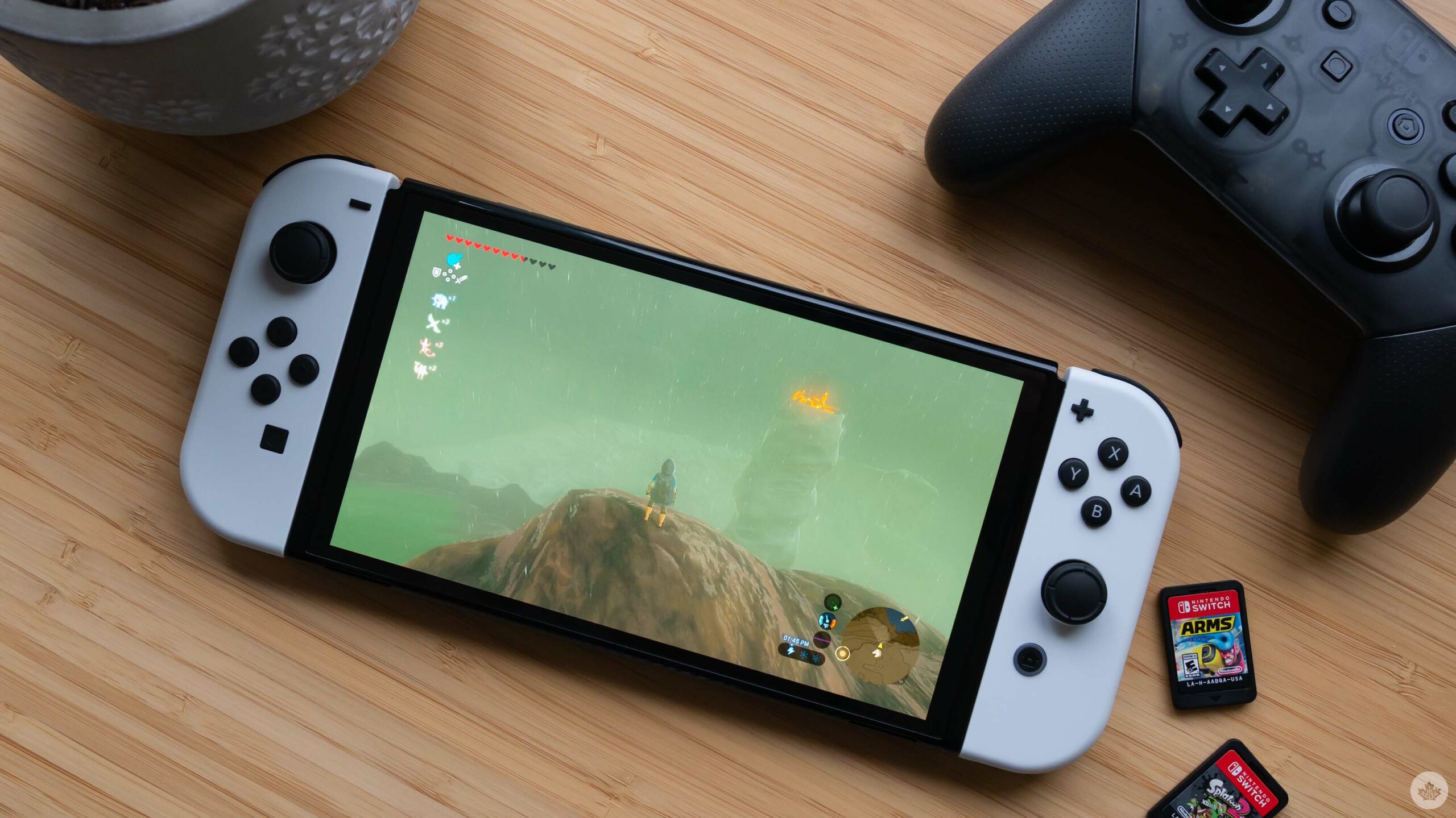 I was pretty disappointed with the Switch OLED model’s reveal a few months ago.

Rumours indicated Nintendo was finally planning to show off a true 4K-capable successor to the ageing Switch. Instead, what we got was little more than a minor upgrade to the handheld’s display.

At the time, it was hard not to be at least a little disappointed. That said, there’s likely still some level of truth to those 4K Switch rumours, despite what ‘capital G gamers’ might want to believe.

“…if you — like me — are the type of person who always wants the latest version of Nintendo’s consoles, there are a few things to really dig about the OLED Switch.”

After spending the last few days with Nintendo’s Switch OLED model, I’m shocked to say that every Switch title I tested with the handheld looks noticeably better than it does when played on the standard Switch. To be clear, I didn’t expect this to be the case at all.

Over the years as a tech reviewer, I’ve spent lots of time using OLED televisions, smartphones and other devices. For example, when Apple’s iPhone made the jump to an OLED display with the iPhone X, I didn’t notice a significant difference in screen quality. While OLED displays nearly always look better than their LCD counterparts, they rarely seem that much better.

Thankfully, this isn’t the case with the Switch OLED model — the screen looks stunning. 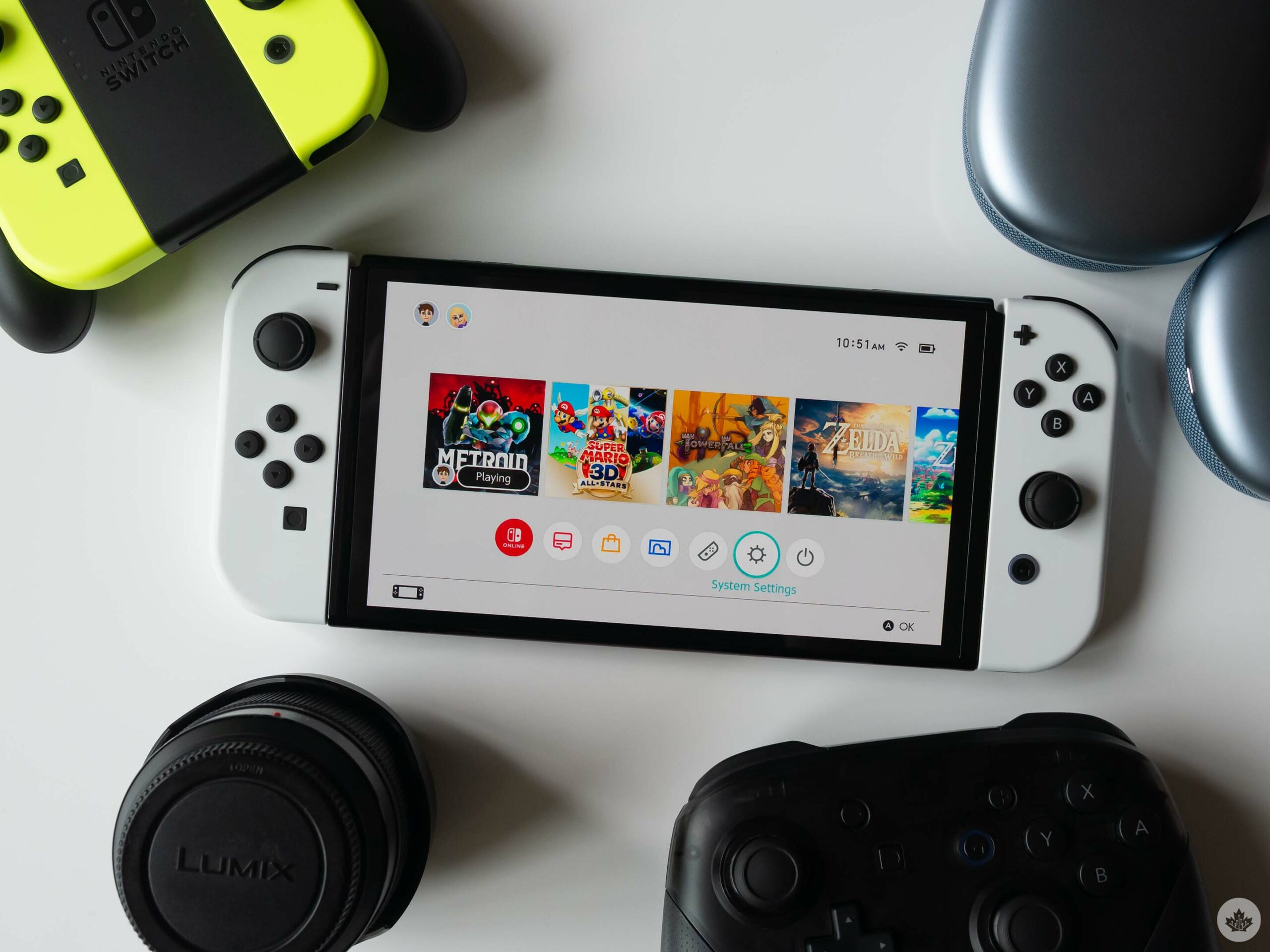 But beyond its larger 7-inch display with minimized bezels, the other upgrades to the Switch OLED model are marginal and only include improved speakers and a dock that features a built-in LAN port.

The main question surrounding the Switch OLED model is: who it’s really for? For example, if you’re a big Nintendo/Switch fan, it’s likely that you already own the device. On the other hand, if you don’t own a Switch yet and have been waiting for a reason to purchase one, you probably don’t care about a fancy OLED display. If this is your mindset, you’re better off picking up the standard or even the Lite version of the Switch, especially given this new iteration costs $70 more at $449.

Regardless, if you — like me — are the type of person who always wants the latest version of Nintendo’s consoles, there are a few things to really dig about the OLED Switch. 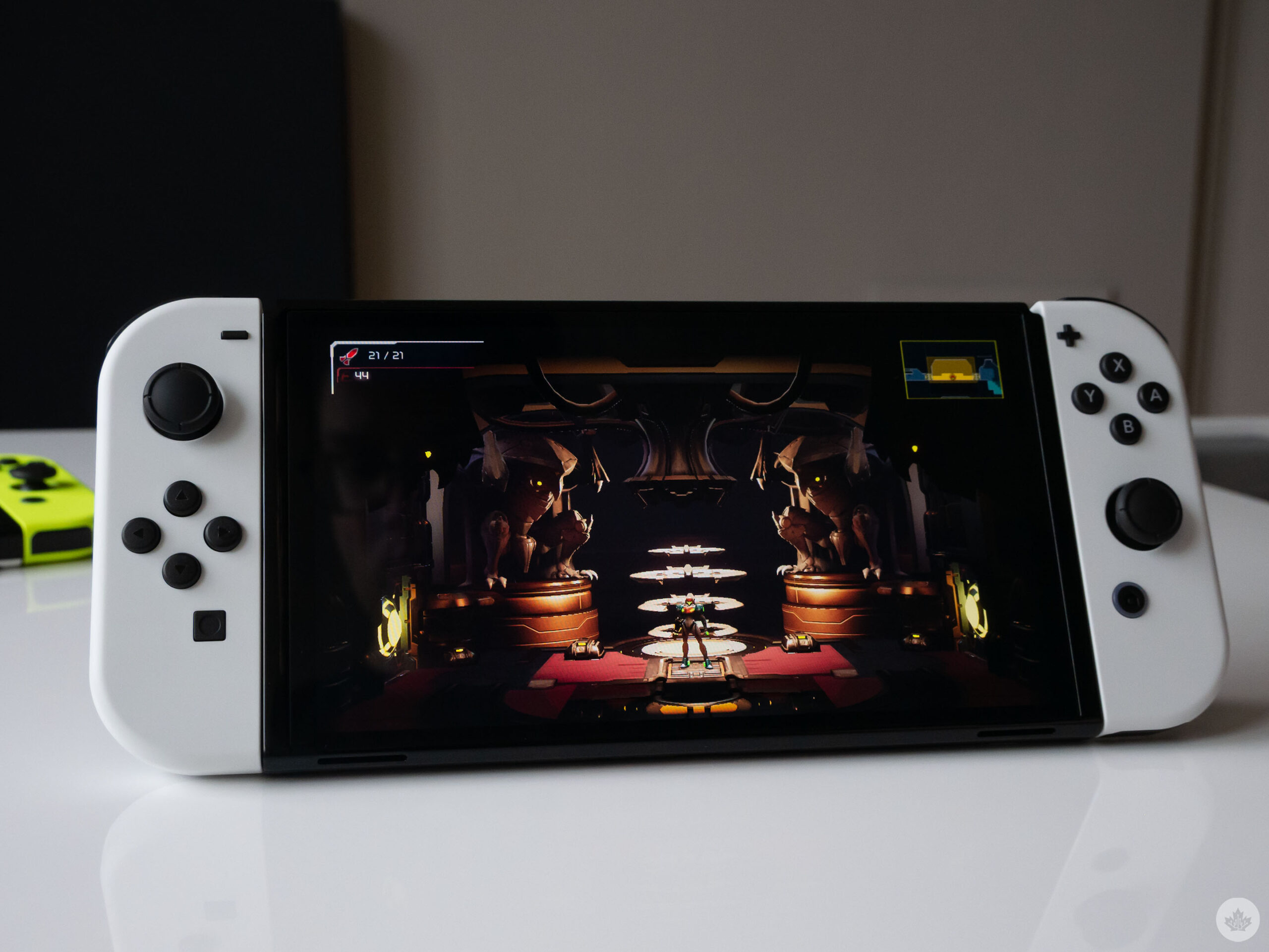 Like the Game Boy Advance SP or New 3DS, the updates to the Switch OLED model are mostly incremental.

First, let’s talk about the key upgrade: the OLED display. The new OLED screen measures at 7-inches compared to its predecessor’s 6.4-inches, but it fits in the same sized body as the standard Switch. This means the display’s bezels are reduced significantly.

While I didn’t think this size change would make much of a difference, it really does, and you can visibly see the upgrade when you place both handhelds side-by-side. It’s also important to note the resolution still measures at just 720p, which is hard not to be disappointed by in an industry full of smartphones that pushed well beyond 1080p several years ago.

What’s most surprising about the OLED model is how much the new display adds to the gaming experience. The OLED model features far deeper blacks and a richer, more vibrant colour palette than the original Switch’s screen. 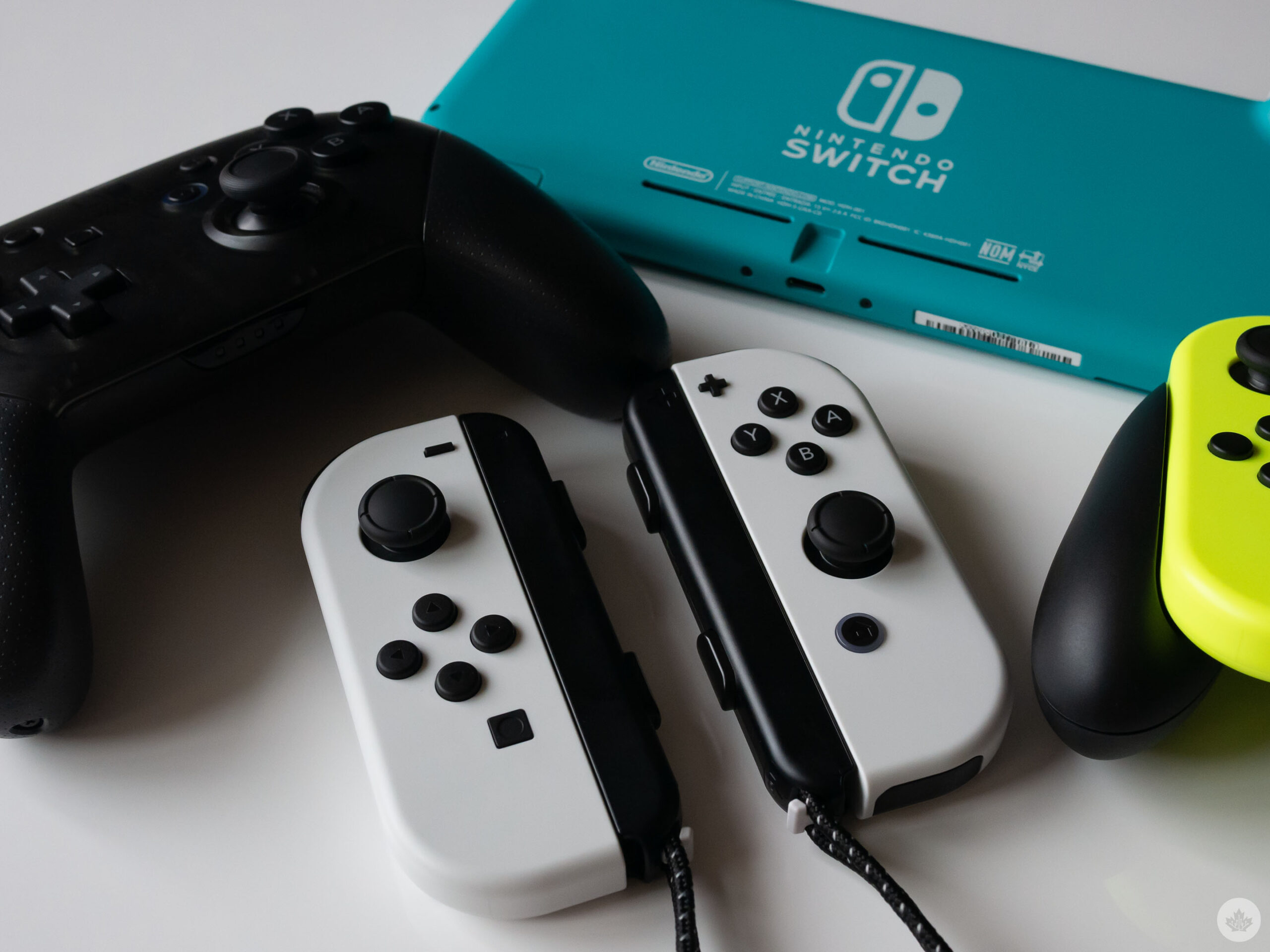 While the improvement is noticeable in every game, Metroid Dread, The Legend of Zelda: Breath of the Wild and Splatoon 2 are three titles where the difference is instantly apparent. The improved colours make the visuals pop from the screen, and the original Switch’s LCD display and sizable bezels look positively dismal in comparison.

It should be noted that Nintendo claims auto-sleep and auto-brightness settings will prevent the OLED Switch from experiencing OLED screen burn-in issues. While likely true, it’s worth keeping in mind that screen burn-in is a problem related to all OLED displays and is something you should be aware of. On that note, I also found the display a little more difficult to view outside in direct sunlight. This is a pretty standard issue with OLED screens, however.

What else is new? 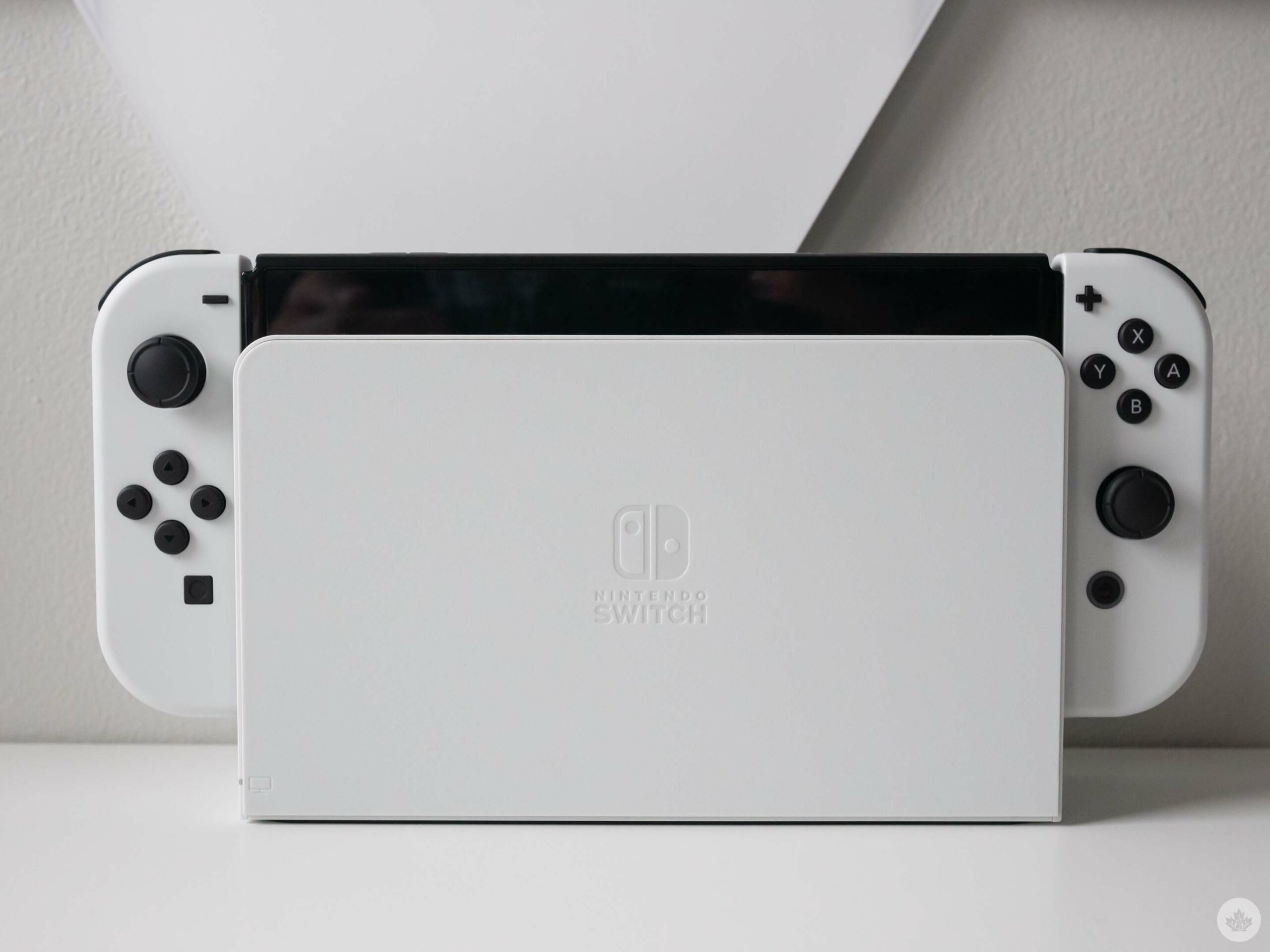 Beyond the display, the OLED Switch’s other upgrades are very incremental.

While I wouldn’t necessarily consider this an improvement, the bezels running around the 7-inch display are shiny now. While this could mean they’re more susceptible to scratches, I haven’t found that to be an issue yet. 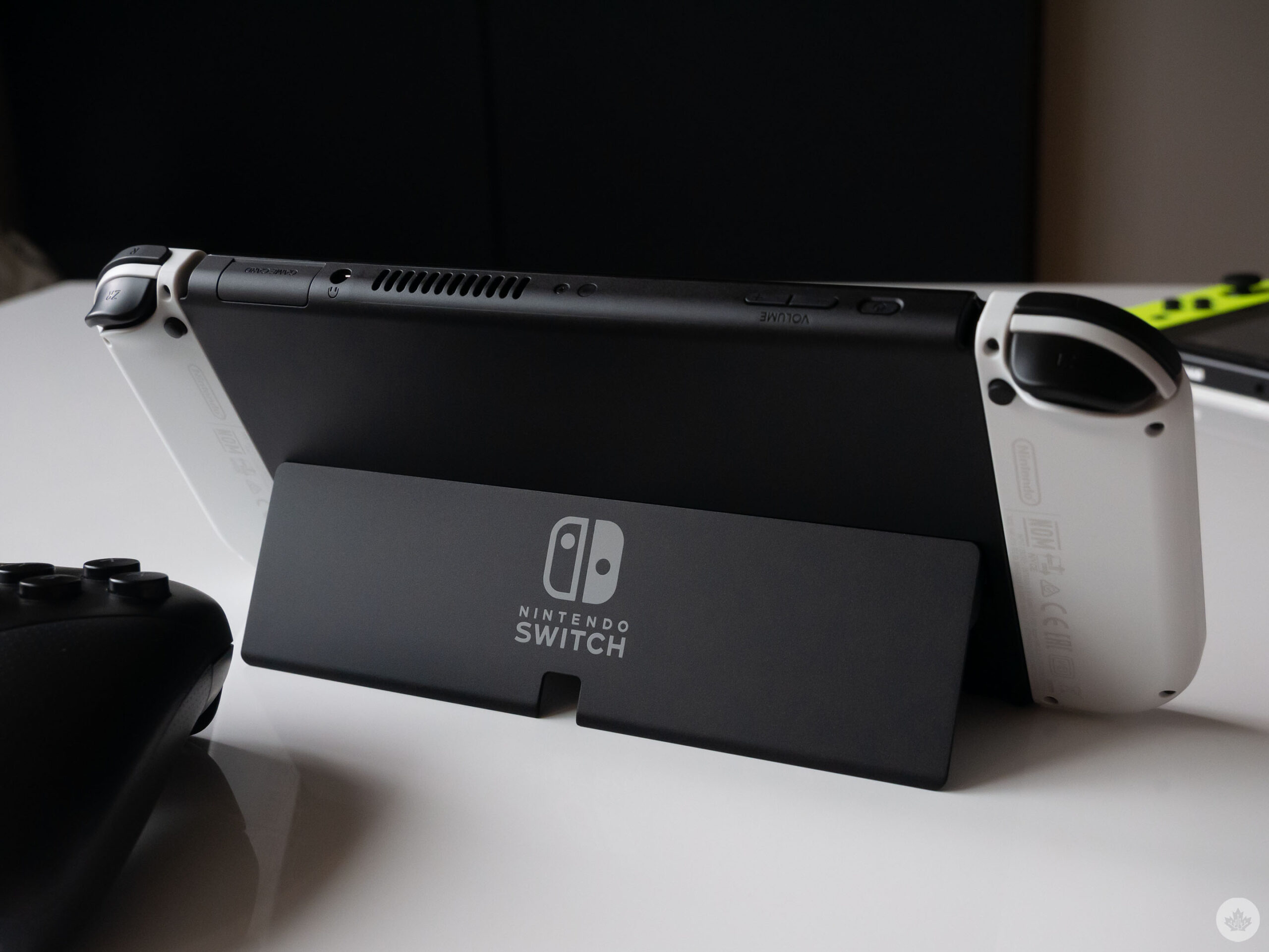 Other changes include a new coating on the rear of the Switch that seems to be far more scratch-resistant than its predecessor’s, as well as more powerful speakers. There’s a very noticeable improvement in sound quality compared to the original Switch. While a welcome upgrade, I typically use headphones when I game with the Switch in portable mode, especially now that I can easily connect Bluetooth earbuds to the handheld.

“And no, the dock doesn’t add 4K capabilities to the Switch OLED model, as some early rumours indicated.”

Speaking of the Switch OLED model’s back, the original Switch’s horrible kickstand is thankfully gone. The new kickstand runs across the lower half of the handheld’s rear and locks firmly in place when you pop it out. In some ways, it reminds me of Microsoft’s Surface Pro kickstand because it’s firm but you can still move it. I didn’t use the kickstand with the original Switch very often, but I’m glad Nintendo improved its design considerably. 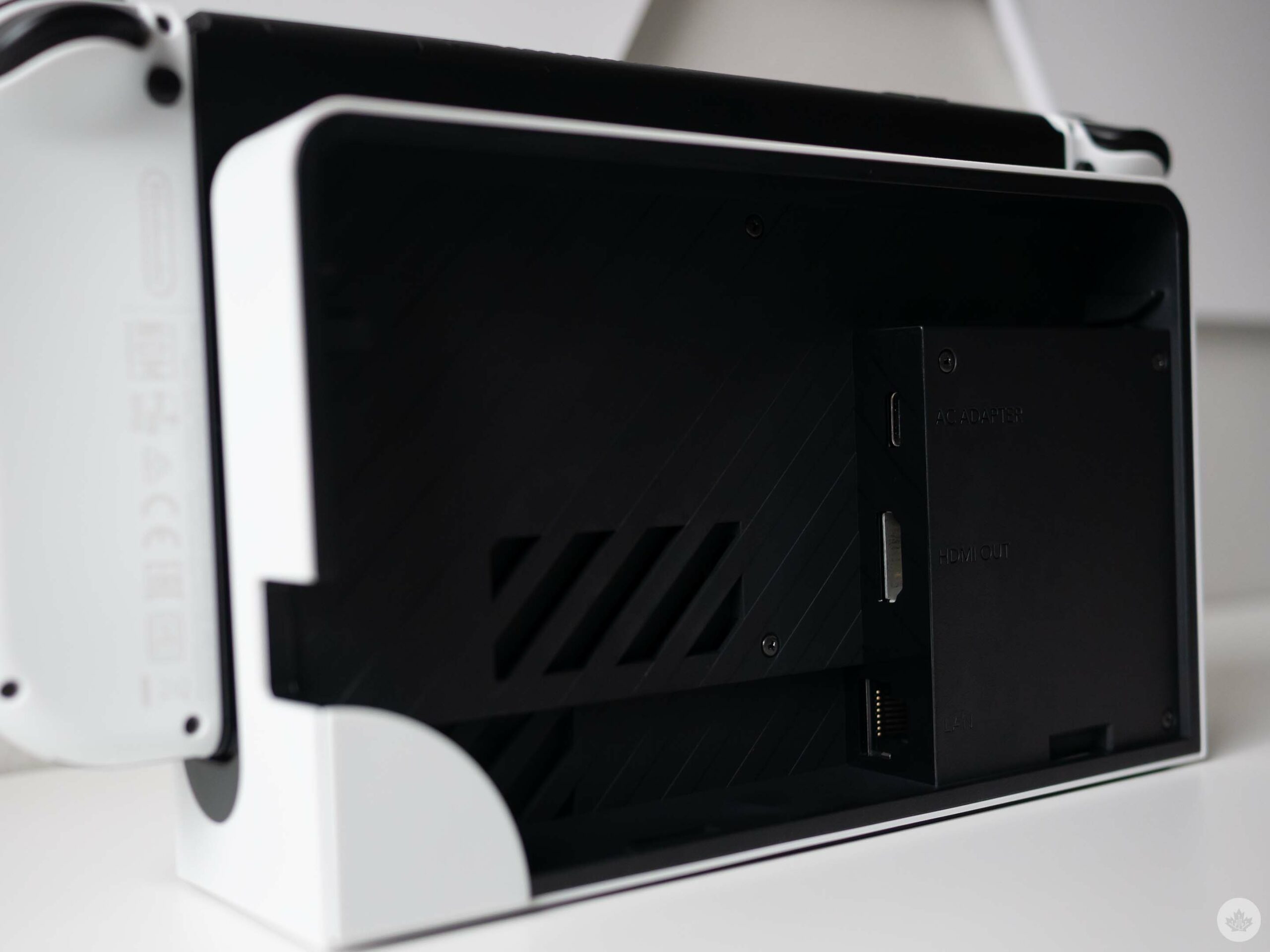 Next, there’s the new and slightly improved dock. The OLED Switch’s dock is mostly identical to the previous version, though it feels slightly more solid. The only notable new feature is the addition of a built-in LAN port. This means you don’t have to buy an adapter to game online over a wired internet connection. This probably should have been included in the first dock to begin with.

And no, the dock doesn’t add 4K capabilities to the Switch OLED model, as some early rumours indicated. Everything else about the console, including its button layout, battery life, and internal hardware, remains identical to the standard Switch. 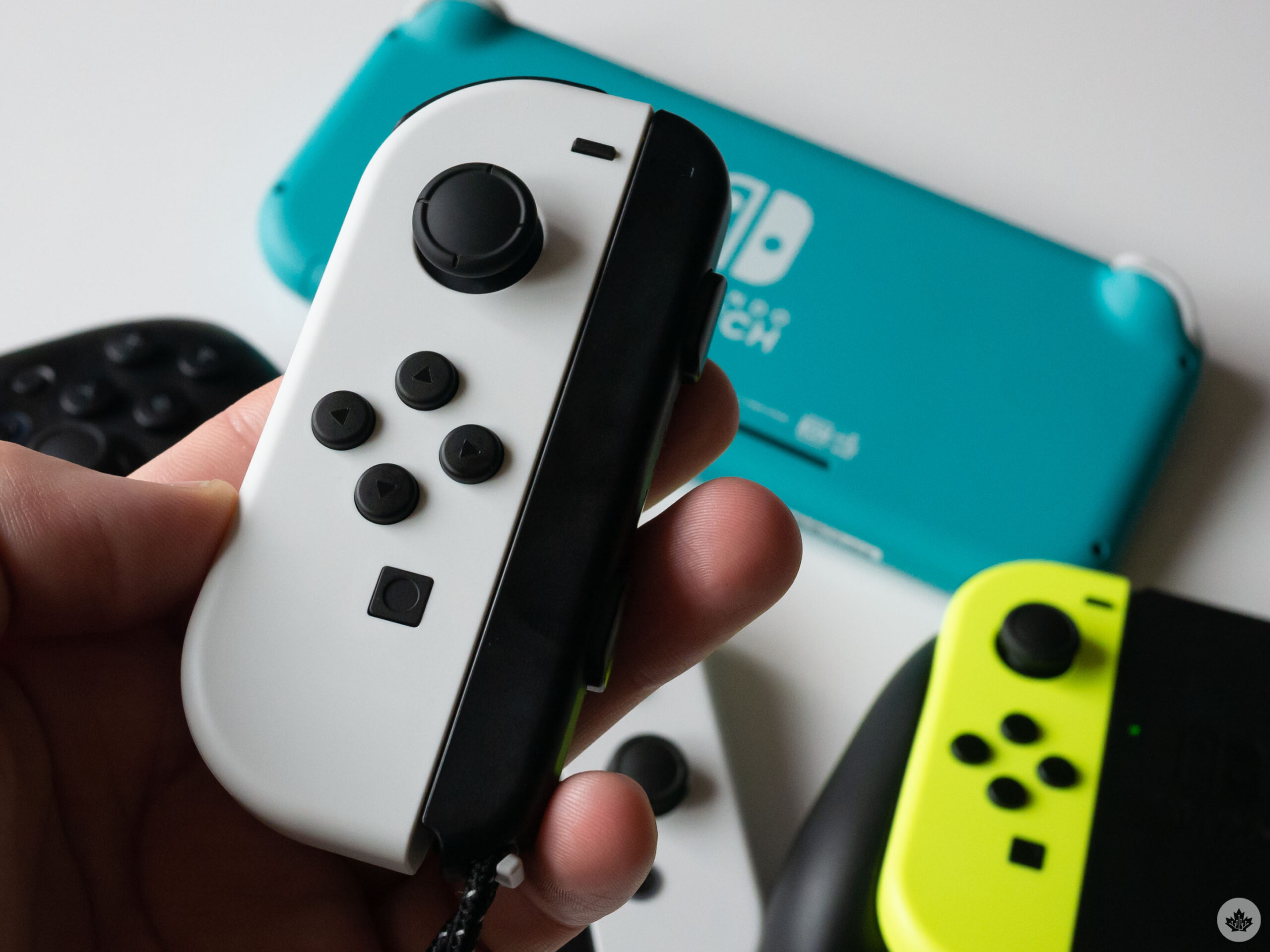 One of the most perplexing things about the Switch OLED model is that the console still comes with the same Joy-Cons. They feel like they may have a slightly more durable coating on their exterior, but beyond this, nothing has changed about the Switch’s controllers.

This means the white Joy-Cons (there is also a red and blue version) included with the OLED Switch could still suffer from the dreaded Joy-Con drift issues that have become so common with the original Switch’s controllers. It’s unclear why Nintendo didn’t opt to solve this issue with its OLED Switch revision, especially given that it seems like the perfect opportunity to do so. 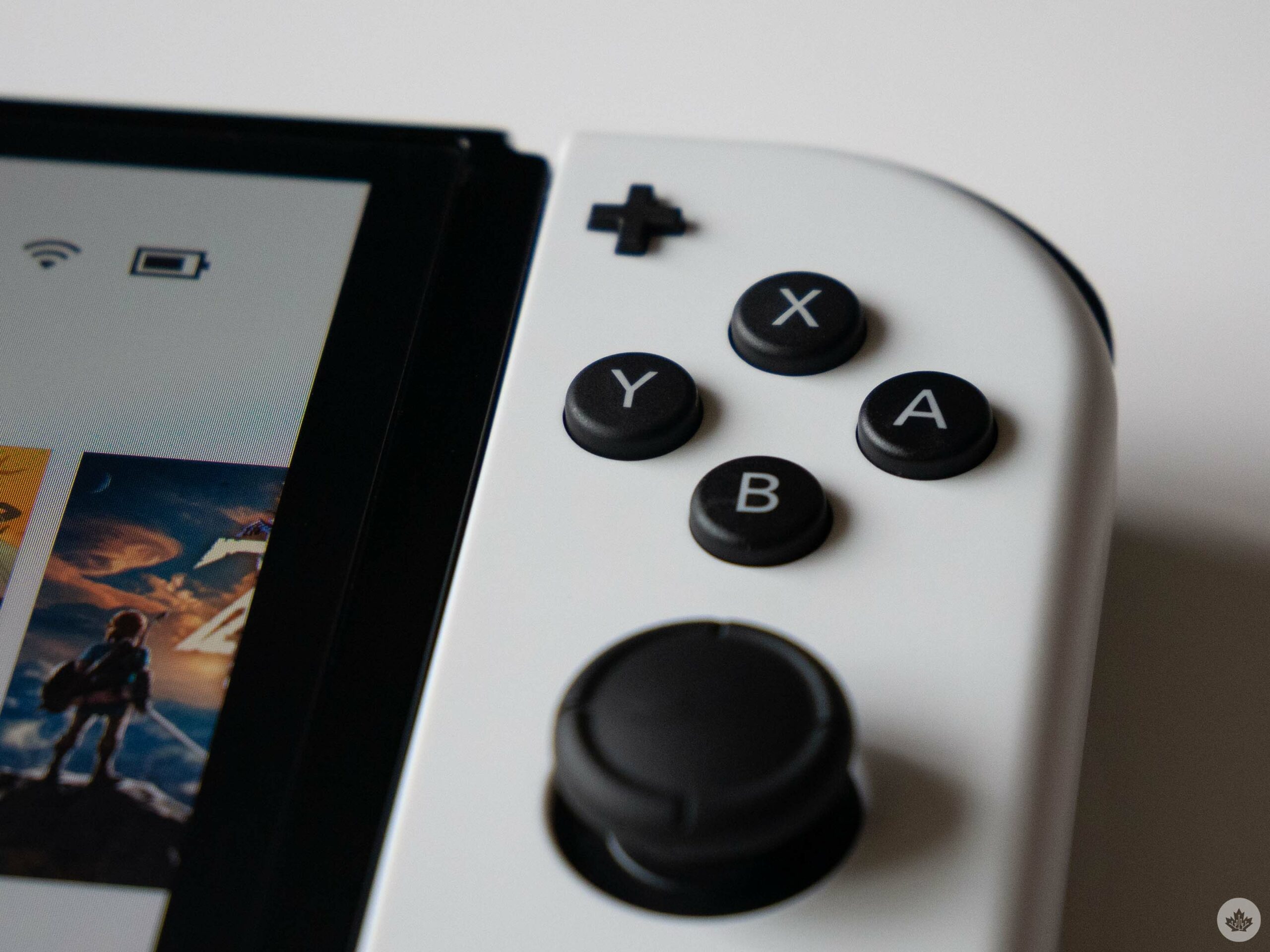 It’s impossible to talk about the Switch OLED model without addressing the rumoured 4K Switch refresh that hasn’t appeared yet.

Whether due to the ongoing chip shortage caused by the COVID-19 pandemic or a complete shift in strategy on Nintendo’s part, the never-ending rumours surrounding a 4K Switch didn’t end up being accurate — at least not yet.

On that same note, the OLED Switch feels like a stop-gap measure that aims to hold off Switch owners eager for an upgrade until the 4K version of the console is ready. It’s unclear if Samsung cut Nintendo a super sick deal on OLED displays or if this new Switch was at one point a more direct successor to the OG Switch, but there’s likely at least some level of truth to both of these theories. 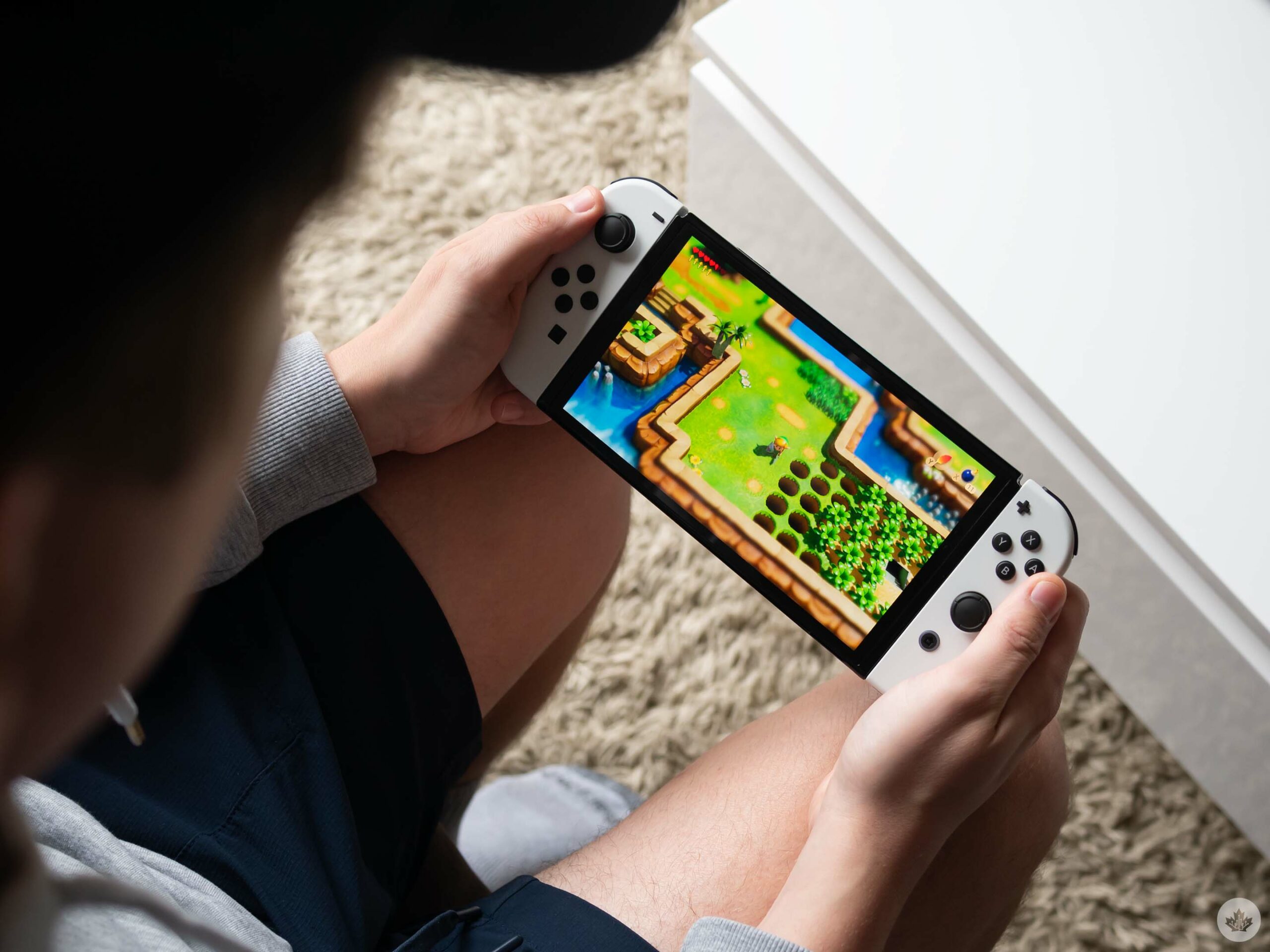 With all of this in mind, I still think there’s a 4K Switch coming. Rumours don’t appear this often when there’s not at least some level of truth to them, and Bloomberg is typically a very reliable source of gaming news. What remains unclear is how many years away a 4K-capable Switch is.

Update 10/07/2021: Though it’s still unclear, based on a recent executive interview with Nintendo, there’s a possibility the Japanese gaming giant has solved Joy-Con controllers’ drift issue. This review will be updated as more information becomes available.

For hardcore fans only

The Switch OLED model is undeniably an upgrade over the original Switch, but the law of diminishing returns comes into play here. I'd even go so far as to call the OLED model a luxury item in some ways, which feels strange to mention in the context of Nintendo.

Sure, the display looks better and even my partner, who typically doesn't notice minor upgrades like this in tech devices, holds the same opinion. But beyond the display, this is the same Switch Nintendo released four and a half years ago.

No one needs to buy a Switch OLED model, but if your current Switch is looking a little worse for wear, then this could be the update you've been waiting for. Alternatively, if you're like me and are just a big fan of Nintendo's hardware -- I still remember selling my GBA and several games to put together the cash to buy a GBA SP -- then the OLED model is a worthwhile upgrade.

"No one needs to buy a Switch OLED model, but if your current Switch is looking a little worse for wear, then this could be the update you've been waiting for"