Here's what it's like to get your Switch Joy-Cons repaired 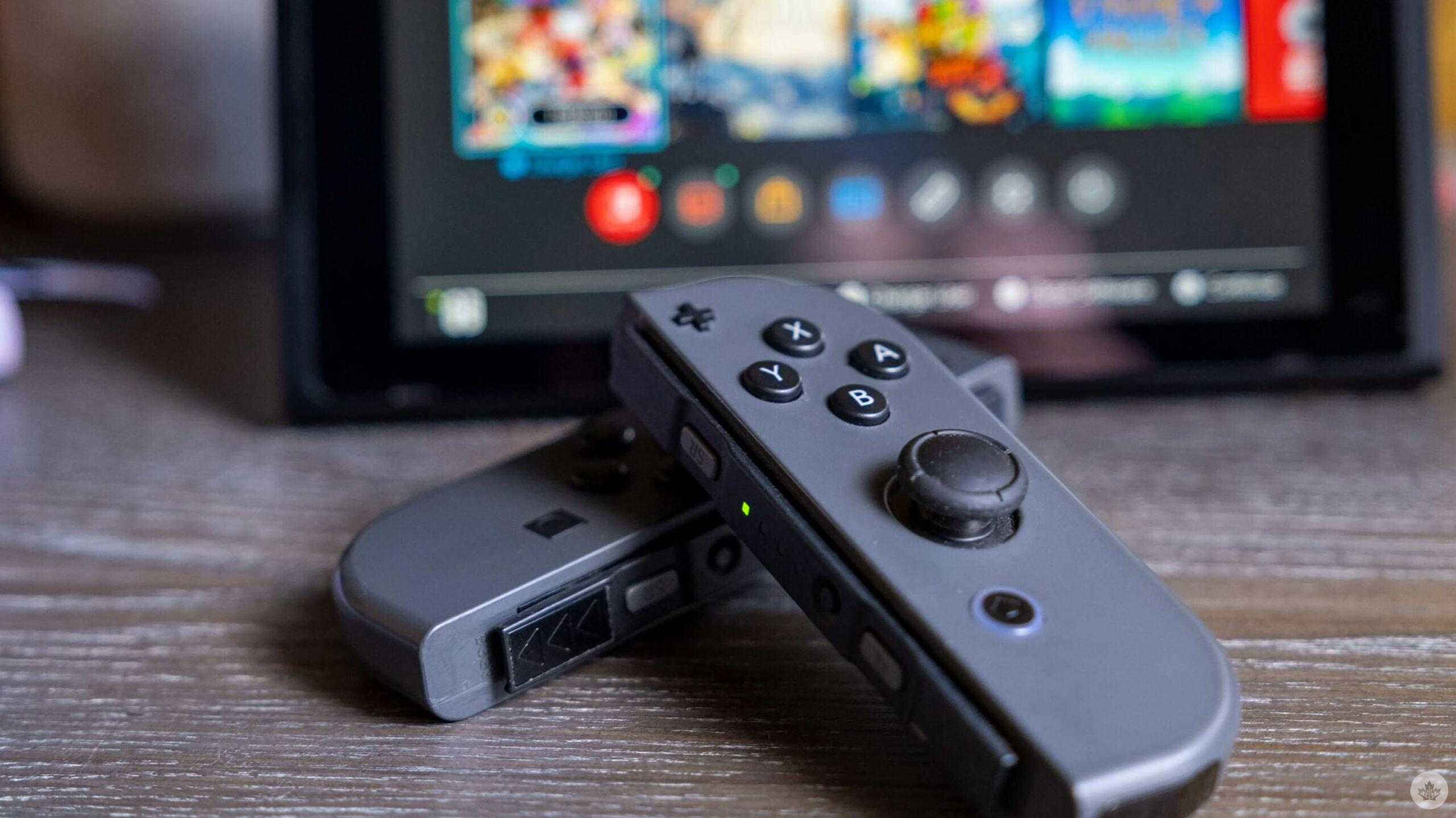 If you owned a Nintendo Switch over the last few years, you’ve probably heard about, or become a victim of, the dreaded “Joy-Con drift” issue that’s plagued the console’s gamepads since its launch.

There’s nothing worse than trying to return to bed on time in Stardew Valley and fighting with the controller to move in the correct direction or failing to dodge an attack in Hades because your dash will only move up. Super Smash Bros. is essentially unplayable with Joy-Con drift, and Mario Kart 8 Deluxe is an (even bigger) lesson in frustration.

Joy-Con drift is the common name for a hardware problem that causes the control stick on Nintendo’s Switch controllers to not respond or register the wrong input even when the gamepad buttons are not pressed.

Since buying my own Switch at launch (and my husband getting his a little later), my household has experienced the issue on three separate sets of Joy-Cons. Each time resulted in the purchase of new controllers or forced me to play the Switch only while docked with a Pro Controller.

“After pressure from several class-action lawsuits, Nintendo has started to offer free Joy-Con repairs through its customer service portal.”

Nintendo has repeatedly denied any issue exists with the Switch’s Joy-Cons — or at least won’t admit that the drift problem is as bad as the internet makes it out to be. However, the problem is widespread enough that Joy-Con home repair guides have become commonplace and several class-action lawsuits have been filed. Pressurized air, rubbing alcohol, bits of paper, and more have all been cited as potential solutions to the issue.

I’ve tried every trick I could find that didn’t involve opening the hardware up myself. Some of the techniques, such as rubbing alcohol, seemed to solve the issue at first. However, the problem would always return after a few hours to a day, which caused more frustration. 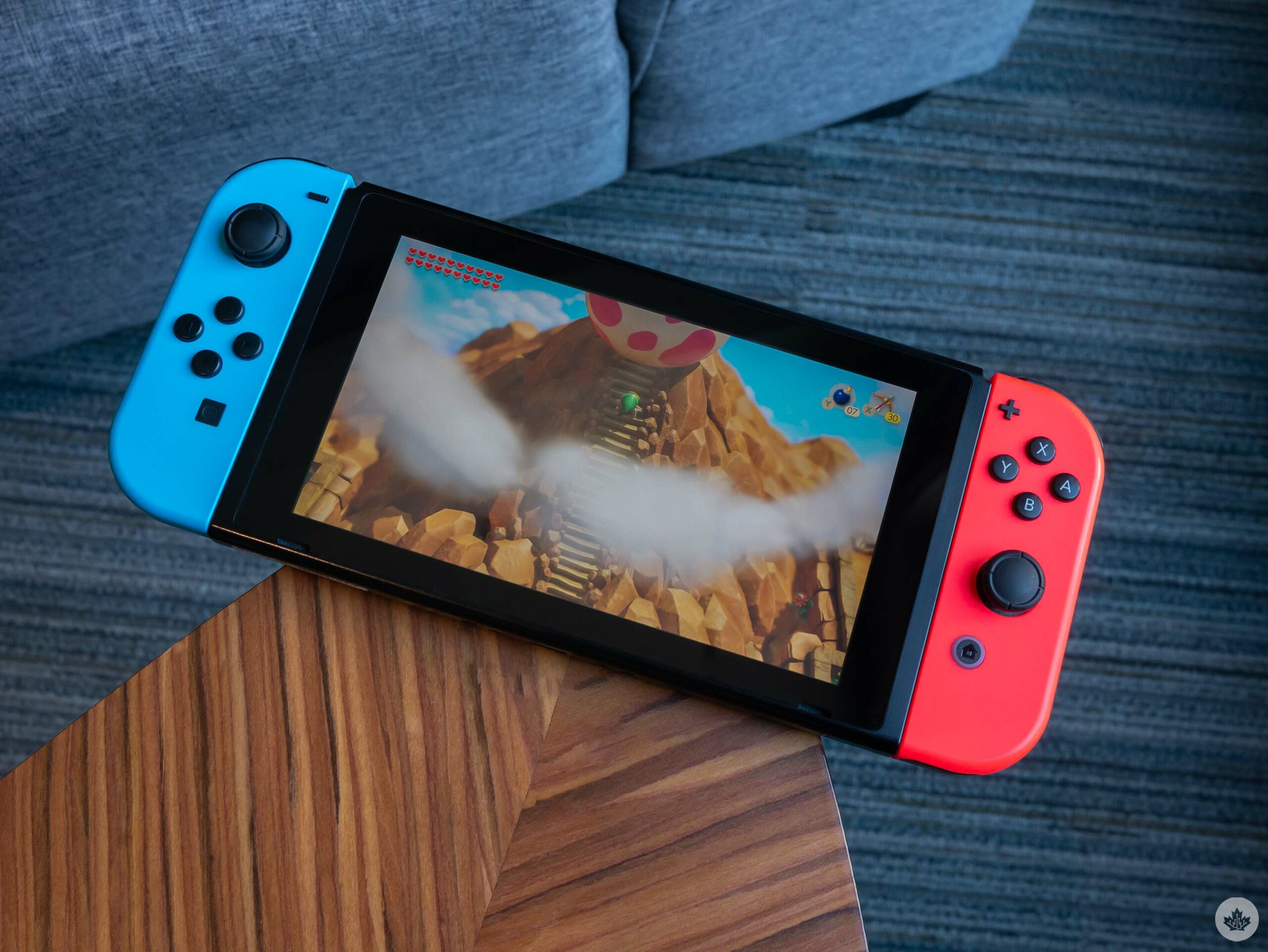 After pressure from several class-action lawsuits, Nintendo has started to offer free Joy-Con repairs through its customer service portal. The process is straightforward; fill out an online form (or call a customer service representative), mail out the equipment, and then wait. Nintendo doesn’t offer any indication of how long the process will take, however.

With the launch of Monster Hunter Rise and Pokémon Unite, I finally felt motivated enough to start the repair process so I could finally return to gaming on my couch, upside down and under a blanket, just like I used to when I was eight and had to use a flashlight with a Game Boy.

Since I owned more than four Joy-Cons with drift, I was required to call Nintendo’s customer service line (the company explains that this is due to lithium-ion battery shipping restrictions). If you want to have less than four Joy-Cons repaired, you need to fill out this form.

In order to process the repair, the agent I spoke to asked the same questions I had previously entered into the form to ship less than five Joy-Cons. I was asked to provide my address, describe the problem, and answer basic troubleshooting questions. I was then requested to provide the serial number of my Switch system, even though I was not sending the console itself in for repair. 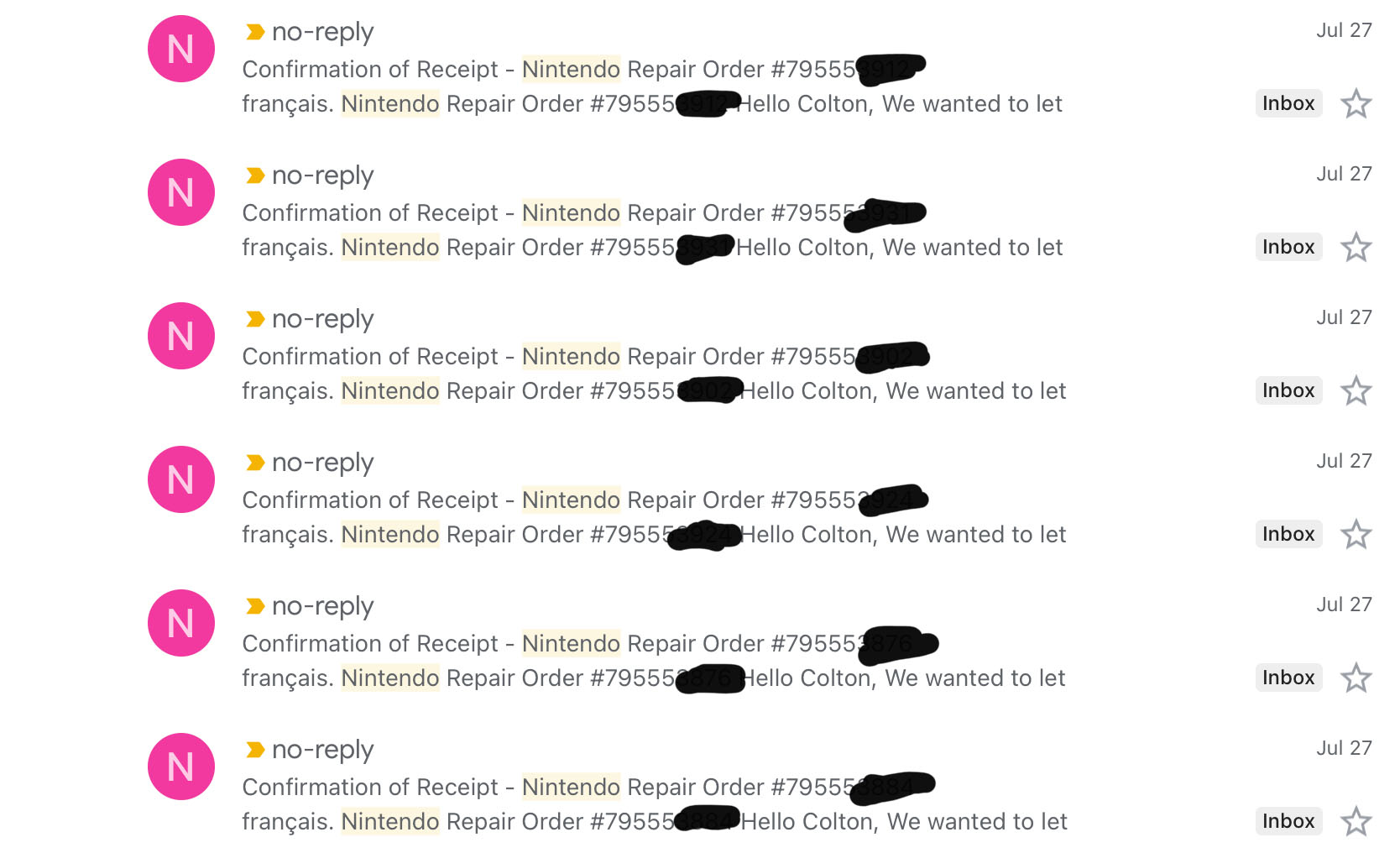 After finishing my call with the agent, I checked my inbox to see eight separate emails from Nintendo. Four of these were different repair orders (with their own repair order numbers), and the others were four separate UPS waybills.

Assuming it would be fine to combine all of them into one box, I packaged up my Joy-Cons as best I could and dropped them off the next day. Afterwards, Nintendo sends your inquiries to its repair tracking website.

Two weeks after dropping the Joy-Cons at my local UPS Store (this is the curse of mailing anything to/from Newfoundland) I received a fresh set of six new emails. Of these emails, two of them had new repair numbers from the original set.

“The entire repair process was straightforward (except for the bombardment of emails) and didn’t require much more from me other than dropping off a box of electronics at a UPS branch.”

Two days after this, I received another set of six emails notifying me that each Joy-Con had completed its repair process and was heading back to me from across a continent.

A few weeks afterwards, a single cardboard box arrived in my kitchen. The Joy-Cons seemed to have been completely replaced (or at least swapped with refurbished controllers).

It’s important to note that Nintendo never confirmed either the issue I was experiencing or that it found a problem to begin with. The repair summary sent back with the controllers listed every possible issue as blank. I, unfortunately, can’t speak to what issue was causing the problem with my Joy-Cons. While there was no charge for the repair process, Nintendo alerted me that I would have paid to repair any physical damage.

The entire repair process was straightforward (except for the bombardment of emails) and didn’t require much more from me other than dropping off a box of electronics at a UPS branch. Aside from a lengthy shipping time of nearly six weeks, it was mostly painless. Since getting my new-to-me controllers back, I have been pestering friends and family to start the process themselves so that they can finally enjoy their game library again.

It’s unclear if Nintendo plans to update the Switch’s hardware to avoid drift in the future, and hope that the new OLED model fixes the issue seems to be misplaced. It’s also an issue plaguing some owners of Nintendo Switch Lite consoles. Since the switch Lite does not allow users to swap out its built-in joystick and buttons, this is even more frustrating than the standard Switch. 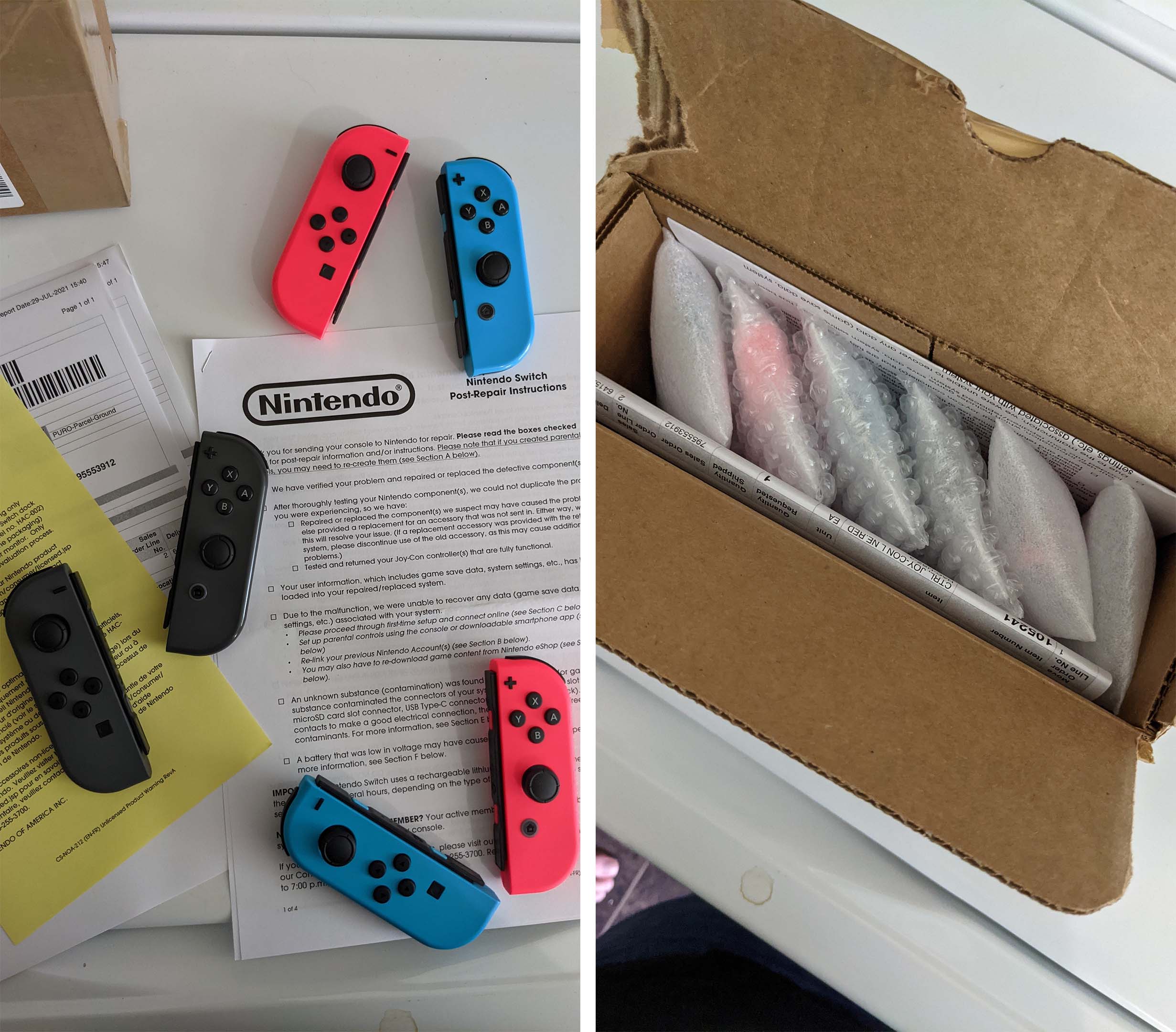 With this in mind, it could be worth picking up an extra set of Joy-Cons or a Pro controller to have a backup if drift is encountered. This is also something to consider if you’re deciding between buying the Lite and the standard Switch.

If you’re experiencing Joy-Con drift with your controllers, I highly recommend you begin the repair process. It may take several weeks to see your Joy-Cons again, but I consider it worth it to avoid spending more money on new controllers that may end up with the same issue anyway.

I’ve been playing with my Joy-Cons again for several days, and I’m pleased to say I haven’t seen any signs of the drift issue returning. Nintendo has not mentioned to me any recourse options if the issue returns, so I’m hopeful I won’t need to cross that bridge again.