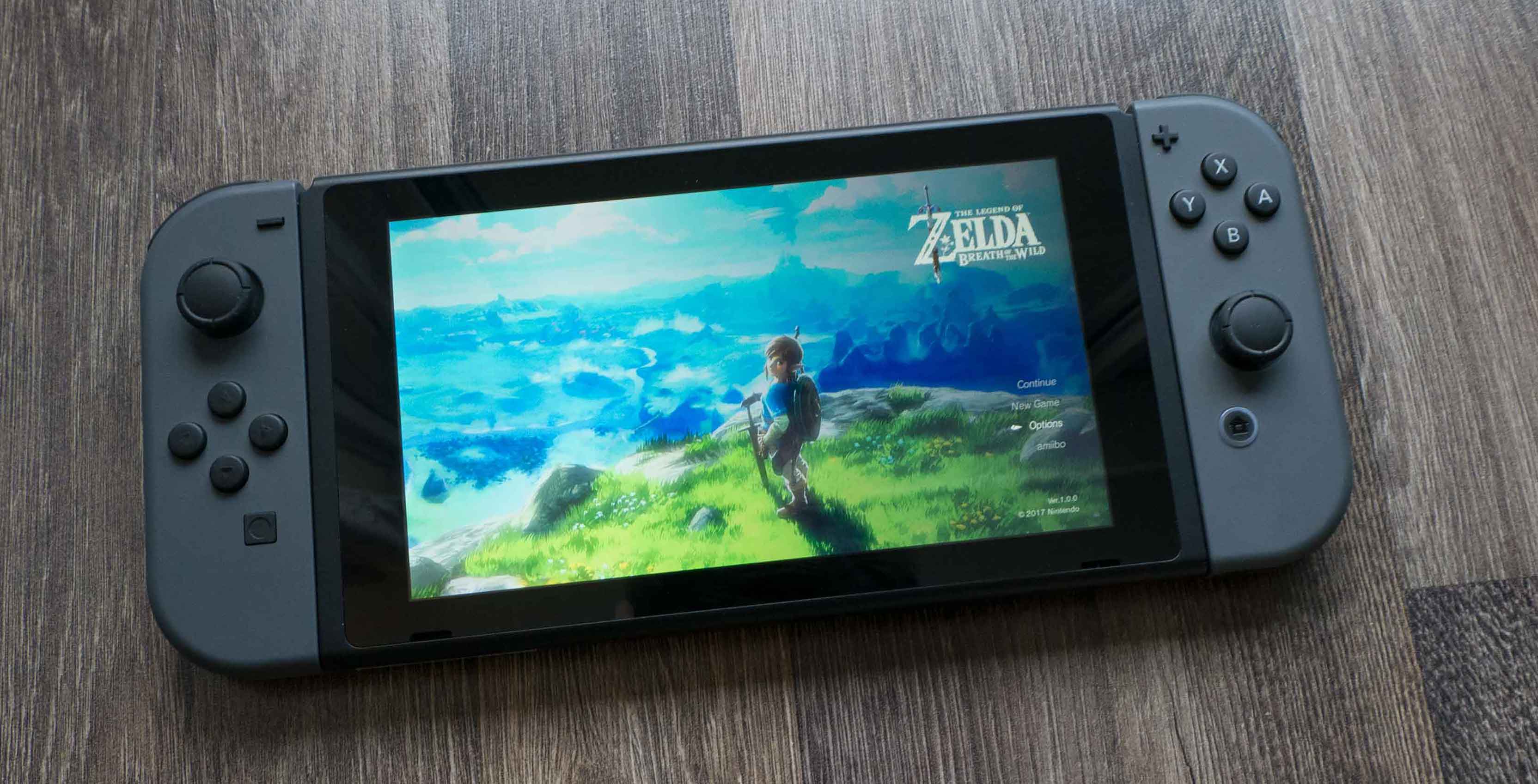 In many ways, the Nintendo Switch reminds me of the first iPhone.

Back in 2007, Apple’s original smartphone featured fascinating, compelling technology that held a vast amount of potential. At launch, however — a friend of mine imported an iPhone from the U.S. before the iPhone 3G came to Canada — there really wasn’t much you could do with what was arguably the world’s first smartphone.

I feel the same way about Nintendo’s Switch. It’s the company’s best-looking console to date. The system’s Joy-con controllers, despite my initial concerns about build quality, feel solid, though they are a little small for people like myself with larger hands. I also haven’t experience the issue some are reporting related to the left Joy-Con losing sync with the Switch.

Even the utility of sliding the Joy-cons off the tablet works exactly as Nintendo advertised. The positives continue: The Switch’s operating system is snappy, responsive and easy to navigate. The return to cartridges is a nostalgic blast from the past and to my surprise, the Switch’s alternative Pro Controller gamepad, may go down as my favourite controller of all time (next to the Xbox One Elite gamepad, of course). 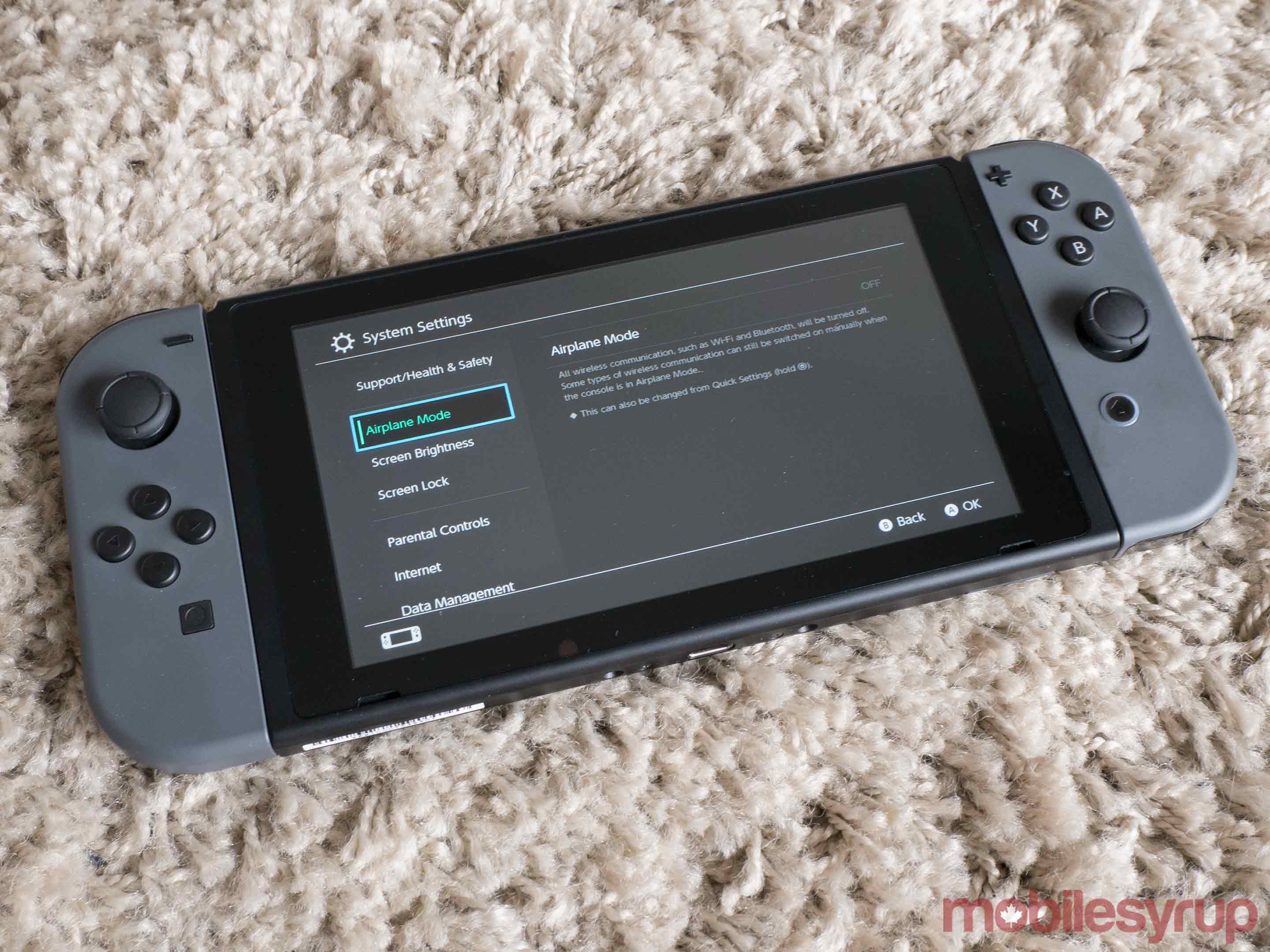 There are a lot of things to like about Nintendo’s new console. In fact, I’d even go so far as to say that I find it more compelling than the Xbox One and PS4 because of its handheld-console hybrid capability.

The Switch, however, is far from perfect and some of its most significant issues will likely be substantial enough to deter many from buying it, at least at launch.

Some of the Wii U’s issues remain 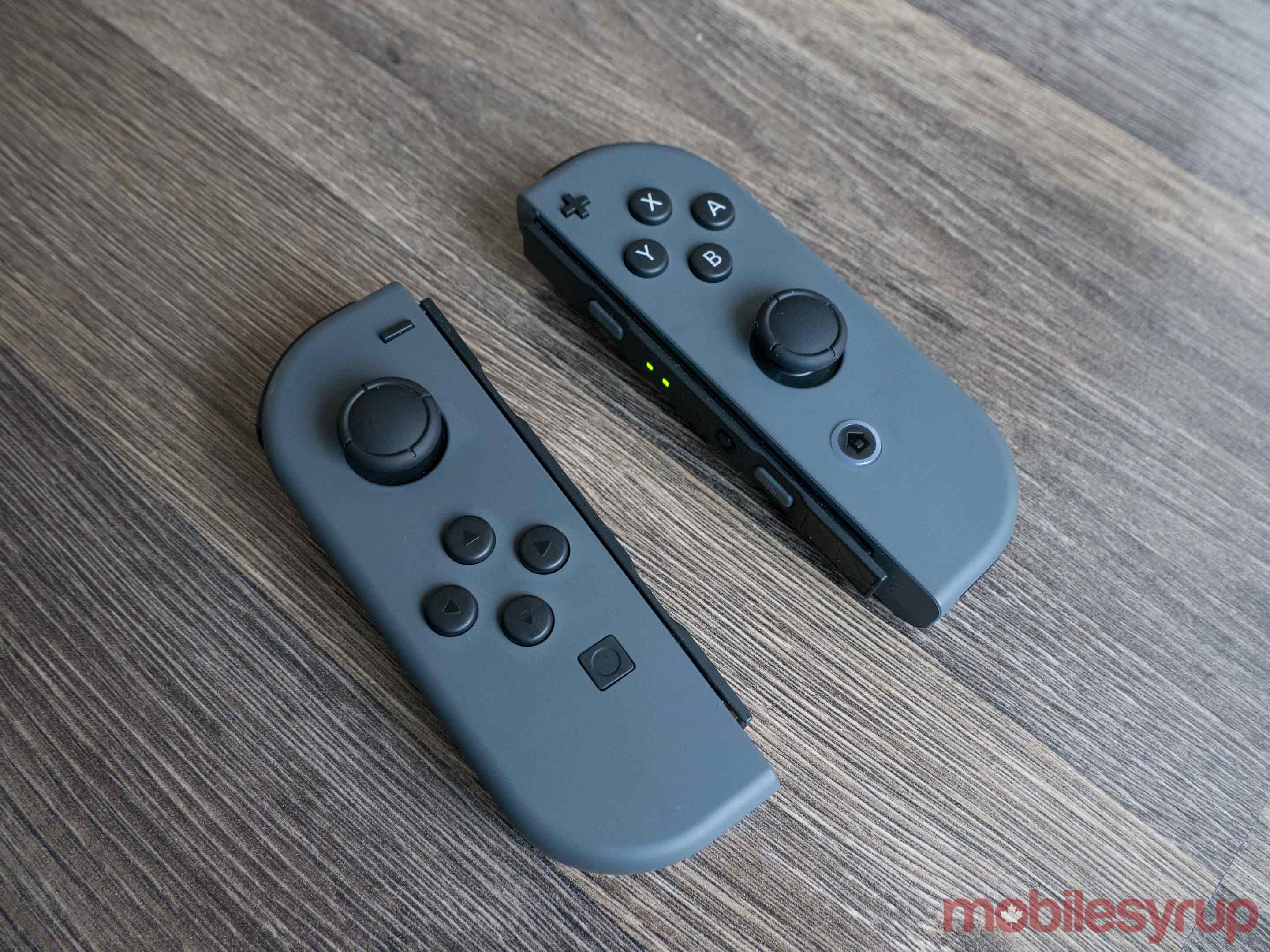 When I reviewed the Wii U back in 2012, I was optimistic about the console and Nintendo’s future. The system’s launch line-up was lacklustre, but a variety of third-party developers pledged to support the console. When almost all those developers ditched the Wii U in favour of the more powerful and versatile Xbox One and PlayStation 4 roughly a year later, only core Nintendo franchises remained on the system, with releases sometimes trickling out months apart in the system’s twilight years.

While it’s impossible to know for sure if the Switch will find itself in the same situation, the warning signs are certainly there. We haven’t seen the final benchmarks, but early impressions indicate the console will likely have difficulty running most cross-platform Xbox One and PlayStation 4 games thanks to its ‘custom’ Nvidia Tegra processor. This could, just like what happened with the Wii U, Nintendo 64, Gamecube and even the Wii towards the end of its life cycle, result in an eventual lack of third-party titles. Developers will need to pare down the experience their games offer visually to get them to run on the Switch. Unfortunately, this is a step some video game creators (and players) may not be willing t0 take. 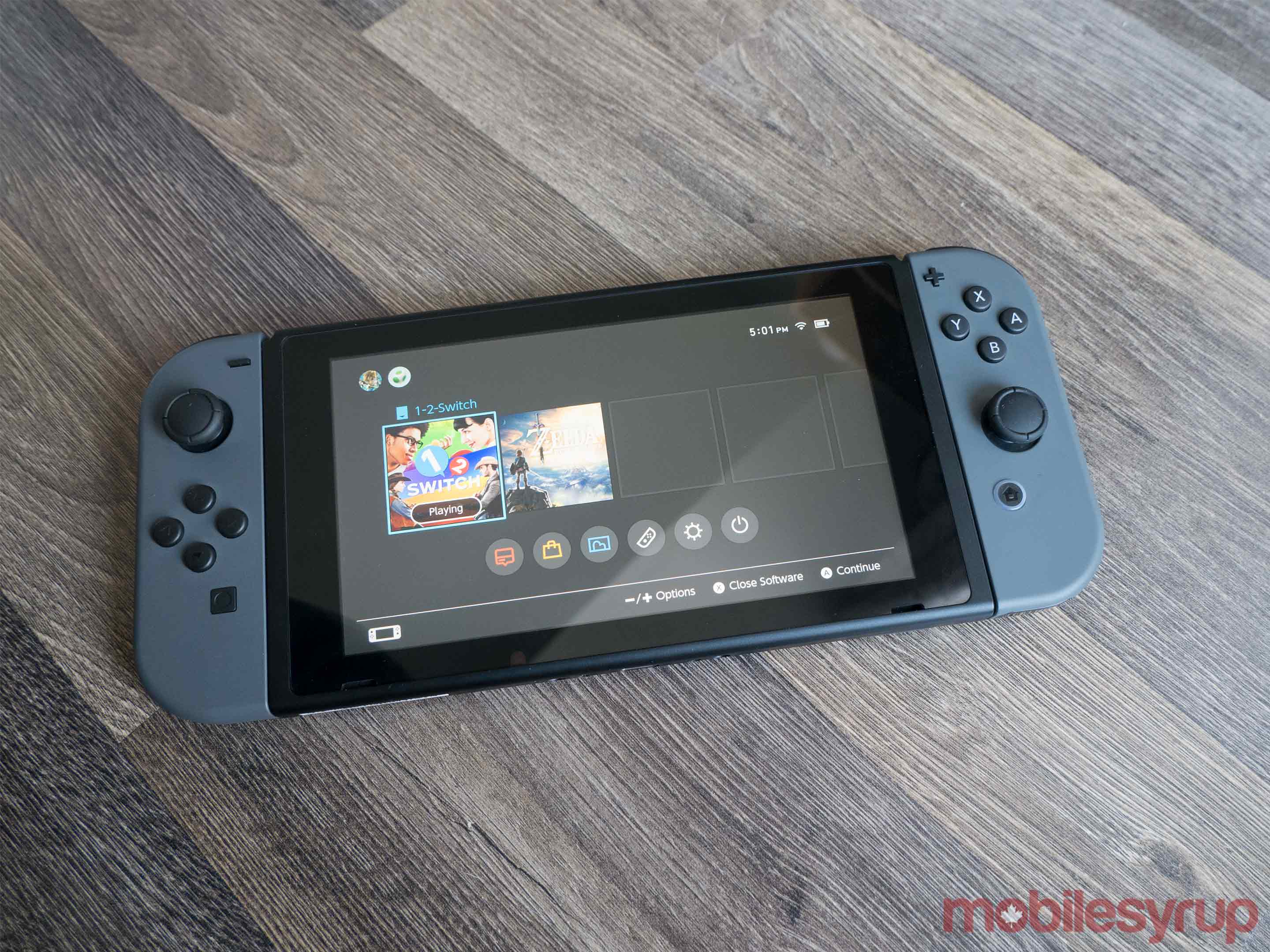 The system is also launching with a lacklustre line-up of titles, with The Legend of Zelda: Breath of the Wild being the only real marquee, stand-out game. Third-party offerings are scarce at launch with Konami’s Super Bomber Man R and Square Enix’s I Am Setsuna — which I haven’t been able to play because review copies weren’t sent out in time to hit the Switch’s embargo — being the only notable titles.

There are some interesting eShop-exclusive titles set to be available at launch, including  Shovel Knight and Snipperclips, but given the fact that Nintendo’s online services aren’t active prior the console’s official release on March 3rd, I haven’t been able to get my hands on those titles either. 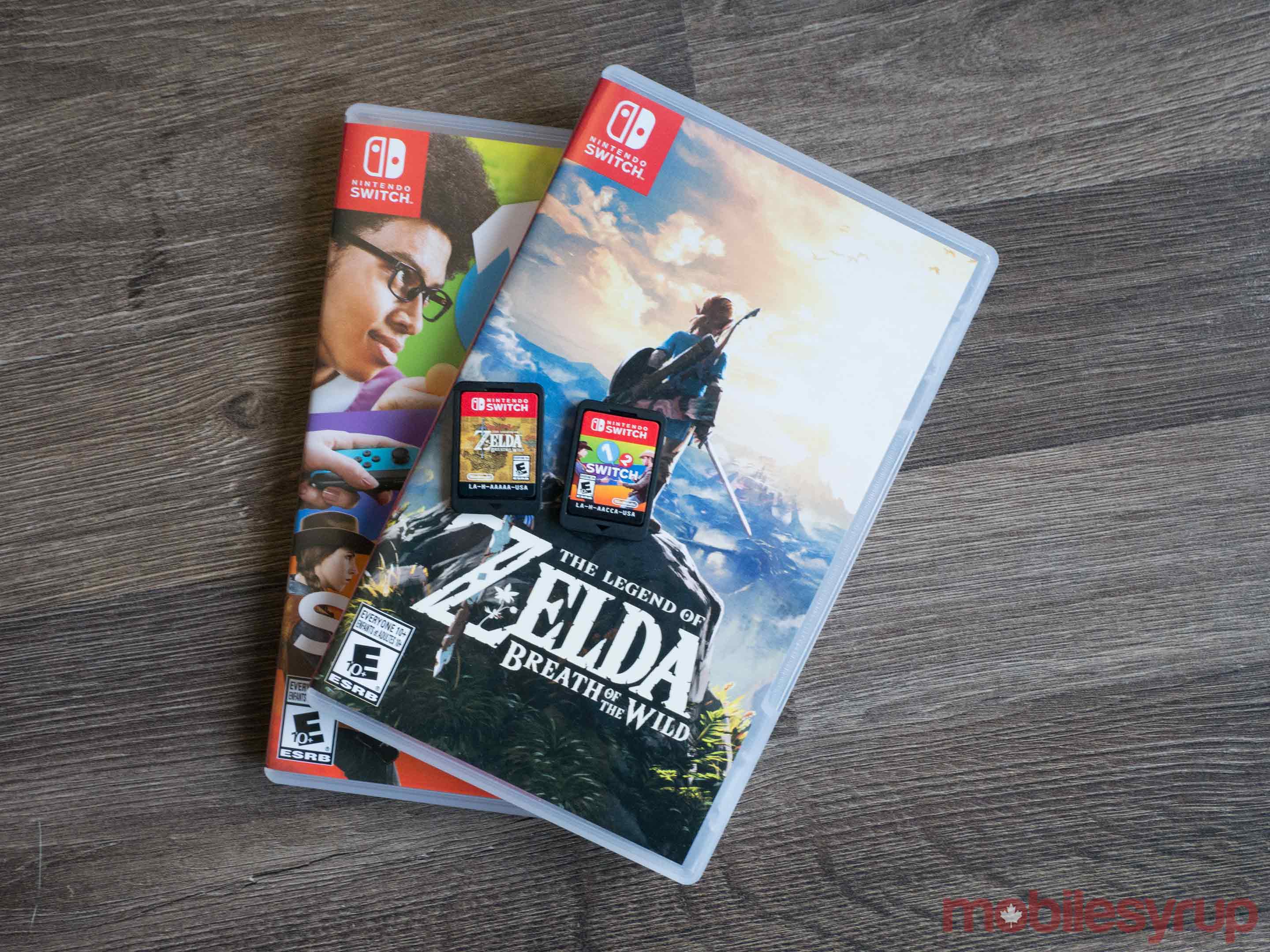 1-2 Switch, the only other game beyond Breath of the Wild I’ve been able to try, is an interesting experiment, but quickly becomes repetitive and uninteresting after a few hours. However, it’s difficult to deny that milking a virtual cow, complete with the Joy-con’s unique rumble sensation (Nintendo calls this HD Rumble), isn’t a hilarious experience.

All in, the only system selling at launch is Breath of the Wild. Some would argue Zelda is all Nintendo needs to convince people to buy the Switch, and they’re likely not wrong. The game is very good and pushes the Zelda franchise forward in a much-needed way. That said, it’s important to point out that Breath of the Wild is also coming out on Nintendo’s previous console, the Wii U. 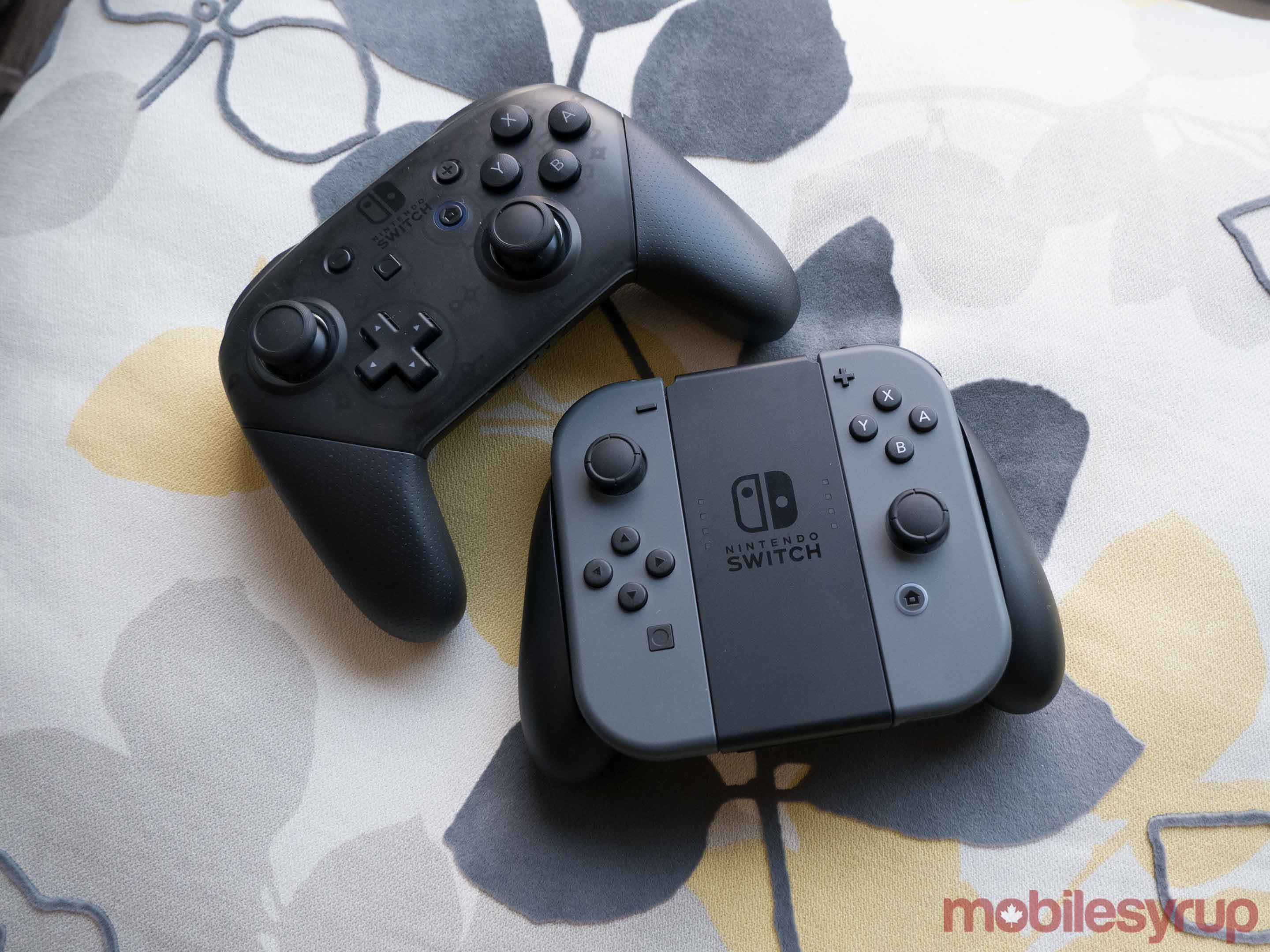 Still, I can’t shake the feeling the Switch is launching as an incomplete system, with Nintendo offering fans the enticing promise that more games are coming, particularly indie titles, and that their other questions surrounding the console, will be answered soon. 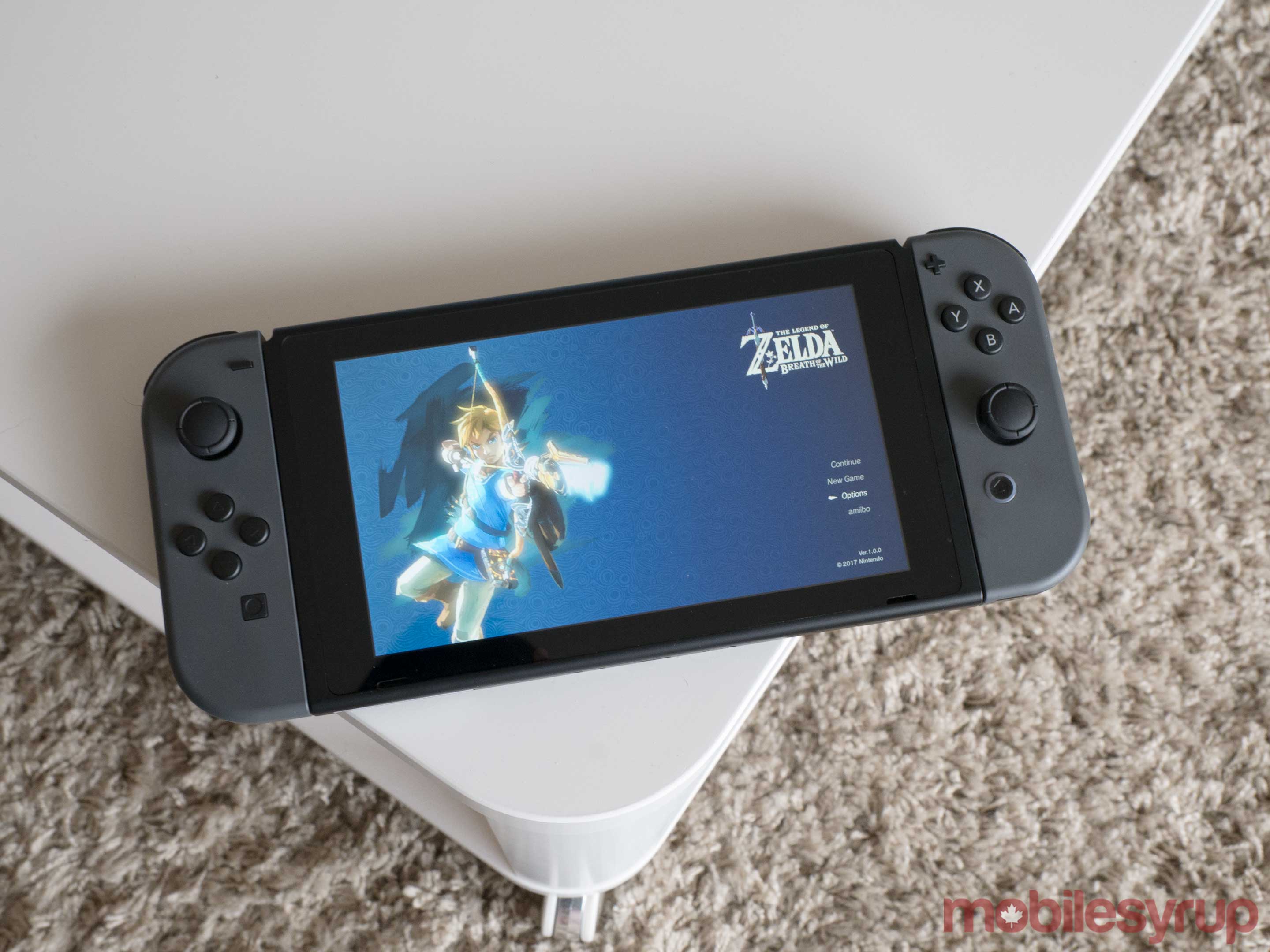 Two of the most significant issues surrounding the Switch’s release are whether the console will allow players to transfer eShop purchases from the Wii and Wii U to the Switch. Nintendo has remained silent on the subject, as well as when Virtual Console functionality, allowing retro games to be played on the system, will finally arrive.

These are two features that should be included with the system at launch, especially virtual console downloads. The Switch and its Joy-cons are perfectly suited for retro video games ranging from any era in Nintendo’s history and it’s a shame the system is launching without some form of throwback functionality. 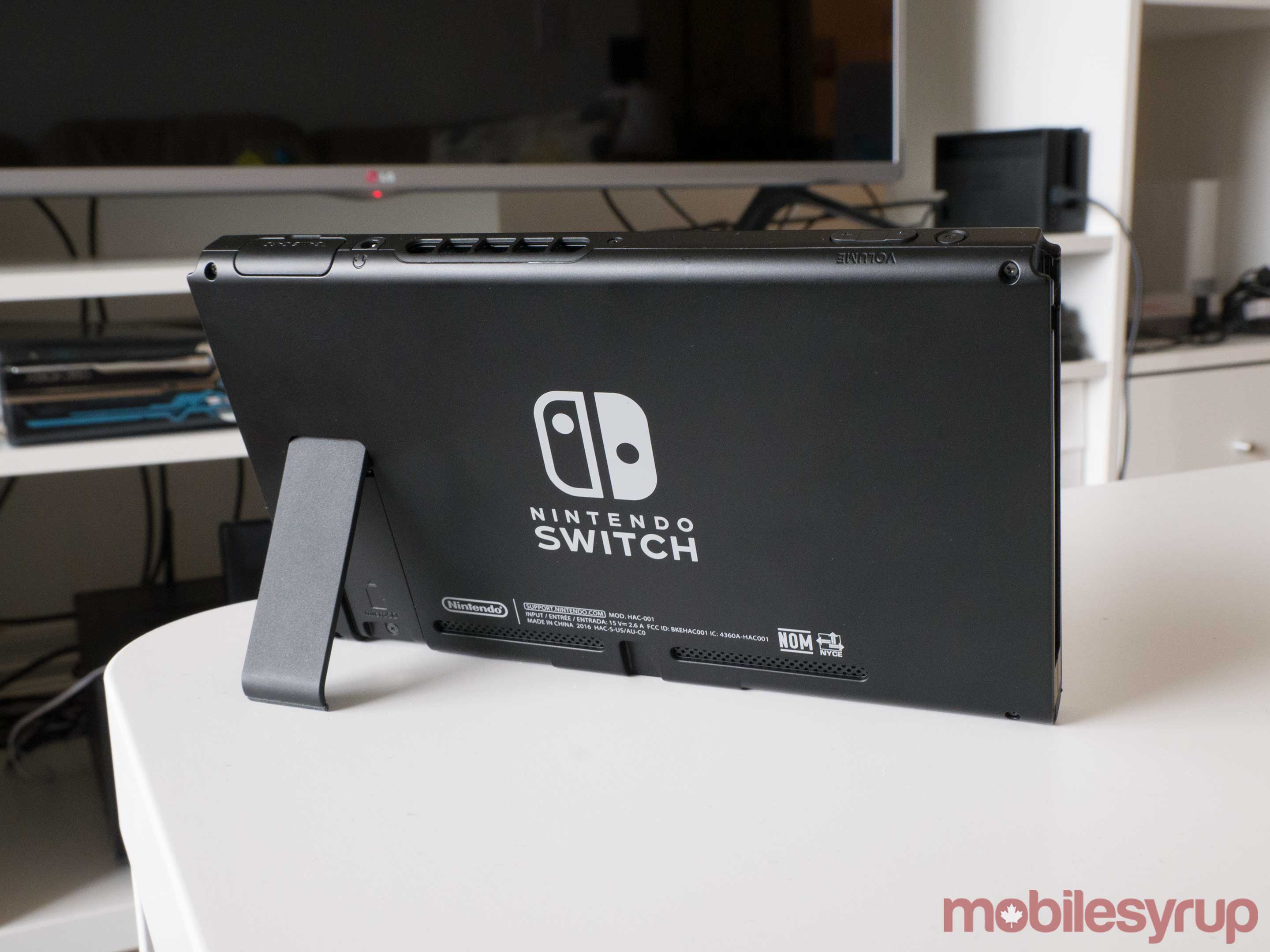 It’s also bizarre that just days away from the Switch’s release, we still don’t know exactly how online play will work. Nintendo has alluded to the fact that chat will be handled through a dedicated Android and iOS app, but that some form of communication will be present on the console as well. Unfortunately, the Japanese gaming giant has never really given a solid answer regarding its online plans for the Switch.

With the Switch’s release date just days away, it’s baffling so little is still known about many of the console’s features. It’s also important to note that this isn’t an issue I’ve encountered before with past console launches. 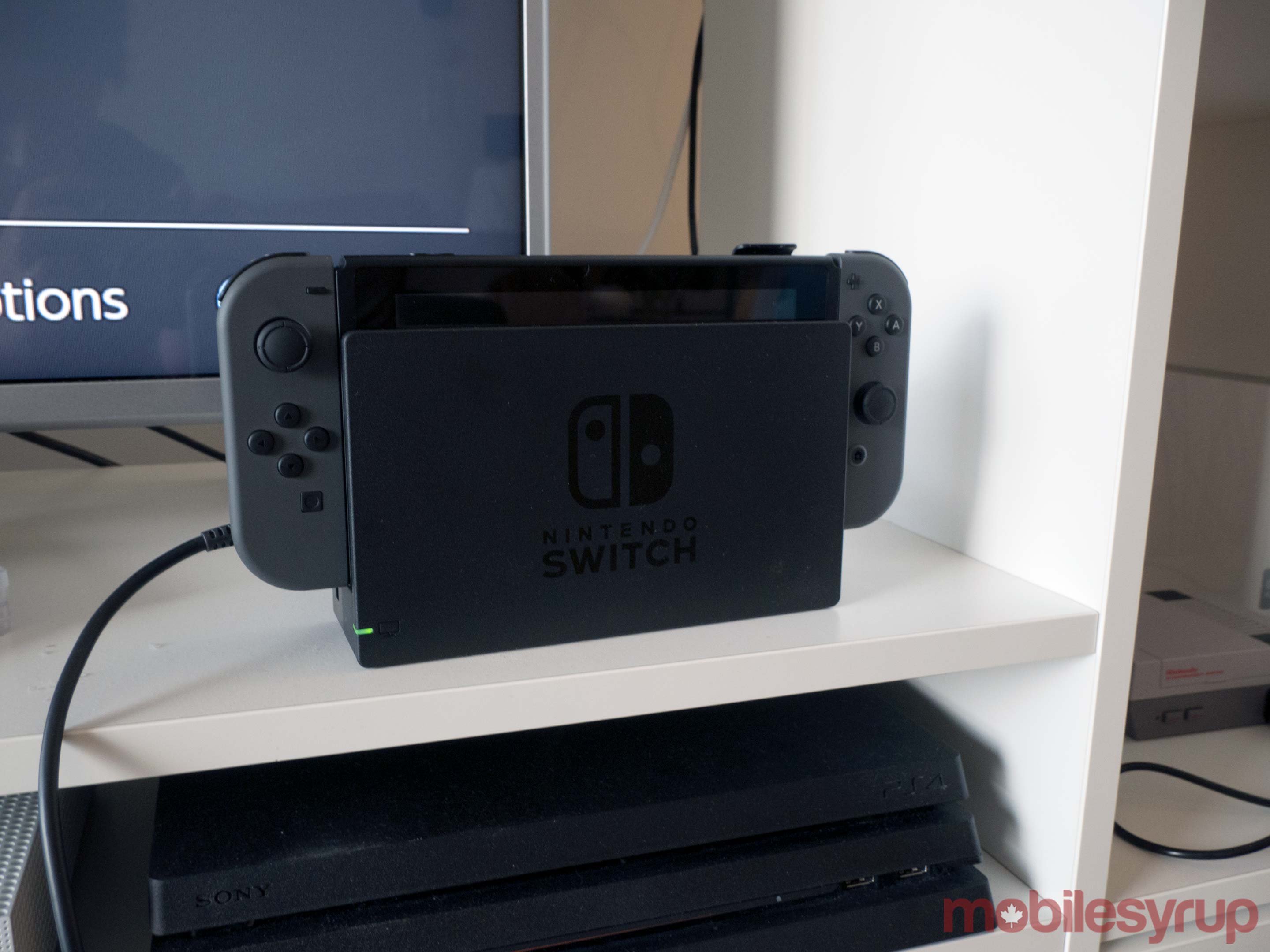 If Nintendo’s lofty ambitions for the Switch pan out, however, it could go down as one of my favourite game console ever. The ability to start playing a game on my television via the console’s easy-to-use USB-C dock that hooks into a TV or receiver via HDMI, and instantly continue playing the game where ever I want on the Switch’s tablet, is very compelling to me. The Switch’s USB-C port also allows the tablet portion of the device, as well as the Joy-cons, to be charged via the system’s AC adapter.

This means if my partner is using the TV, I can pop the Switch off its dock and continue playing from anywhere in my apartment. I can even start a game in the morning before work, continue that experience on the street car on my way in, get in a few minutes of Zelda during lunch, and then jump back into Hyrule on my way home.

For someone like myself who’s always traveling, whether it’s on a press trip or during my lengthy commute, the Switch is a dream come true. In fact, as a child I imagined a Nintendo console that would have worked a lot like the Switch. In illegible pencil crayon scribbles, I drew a system that could be played on the tiny television in my room, but also anywhere else I wanted — unfortunately, I don’t have the diagram to prove I came up with the idea first anymore.

The fact that the Switch’s tablet only features a 1280 x 720 pixel resolution and not 1920 x 1080 pixels like most smartphones and tablets, could be a significant issue for some. While I find the lack of a 1080p display disappointing, it’s far from a deal breaker. For example, Breath of the Wild still looks great running on the Switch’s 720p display. It is worth mentioning that under direct sunlight, the Switch’s display is difficult to see. 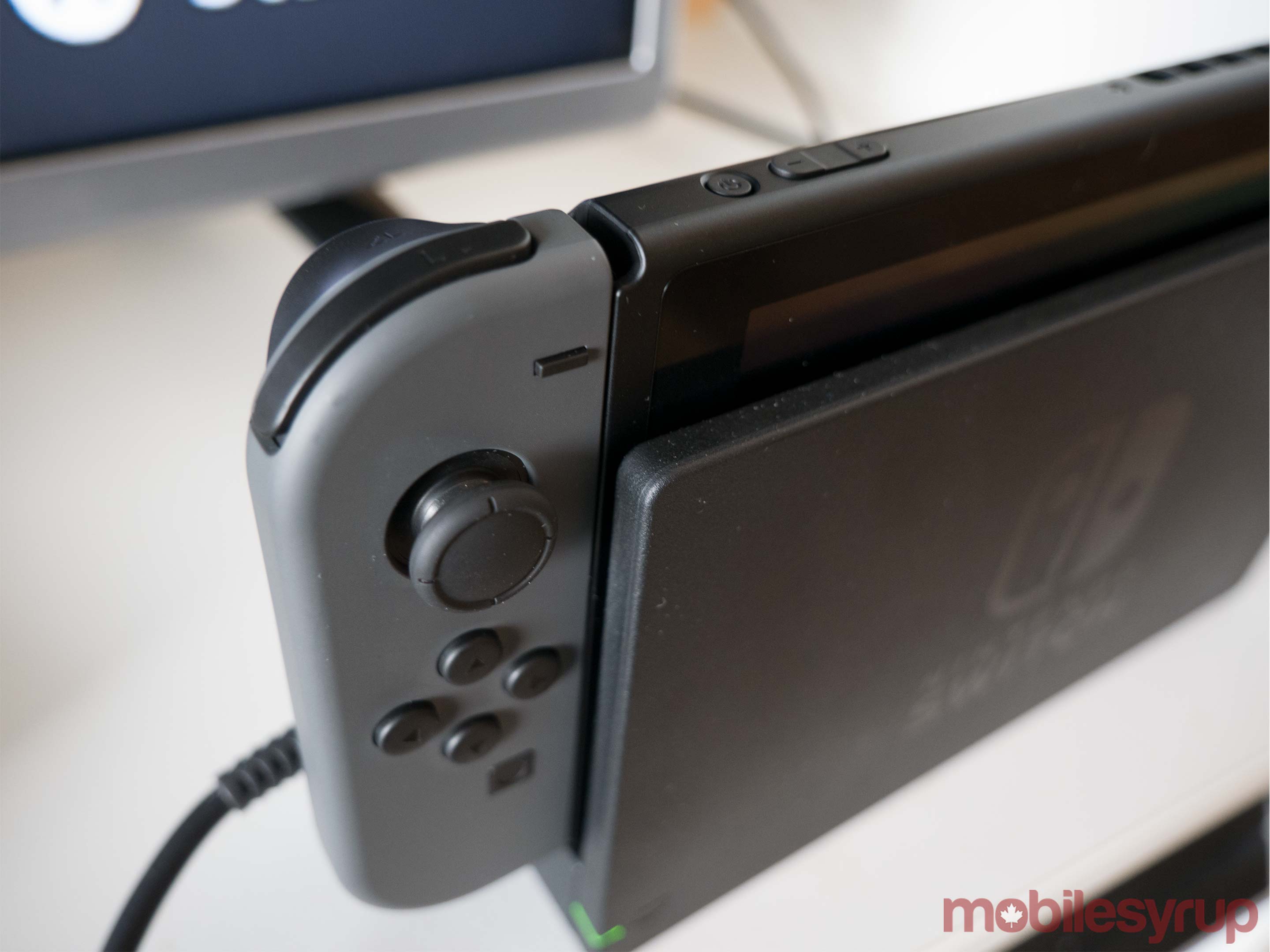 It’s also likely that Nintendo wanted to limit the tablet’s resolution to save battery life, which measures in at just three hours when playing graphically intense games like Zelda.

With other titles like 1-2 Switch, the console seems to last considerably longer. The console’s Kickstand is also flimsy, difficult to use and in more than a few instances, it inadvertently popped out of the back of the Switch when using it in tablet mode.

Nintendo is selling a promise

With the Switch, Nintendo is essentially selling a $400 promise. The console has issues, including what will likely be an underpowered processor, a possible lack of third-party support -- though Nintendo claims to have 50 developers and publishers on board with the console already -- and a minuscule 32GB of internal storage. Get ready to buy a MicroSD card if you're planning on downloading games digitally. The overarching, take-a-console-experience-with-you-anywhere direction of the Switch, however, is just too compelling for me to not be excited about.

For some, The Legend of Zelda Breath of the Wild will be more than enough reason to pick up the console. Despite its slow-down issues, draw distance problems and the disappointment that it doesn't look great running on a television, I expect the latest entry in the Zelda franchise to sit at the top of most game critic's game of the year list come January this year. For everyone else, however, waiting until Christmas 2017 as well as to see what the Switch's Virtual Console and online multiplayer features actually look like, is a more sensible plan of action. Note: As Nintendo adds more features to the Switch we'll update this review and the score our overall score accordingly.

"It's Nintendo's best-looking console to date"