Here’s why Zelda: Breath of the Wild is one of the best games of the last 10 years [This Week in Gaming] 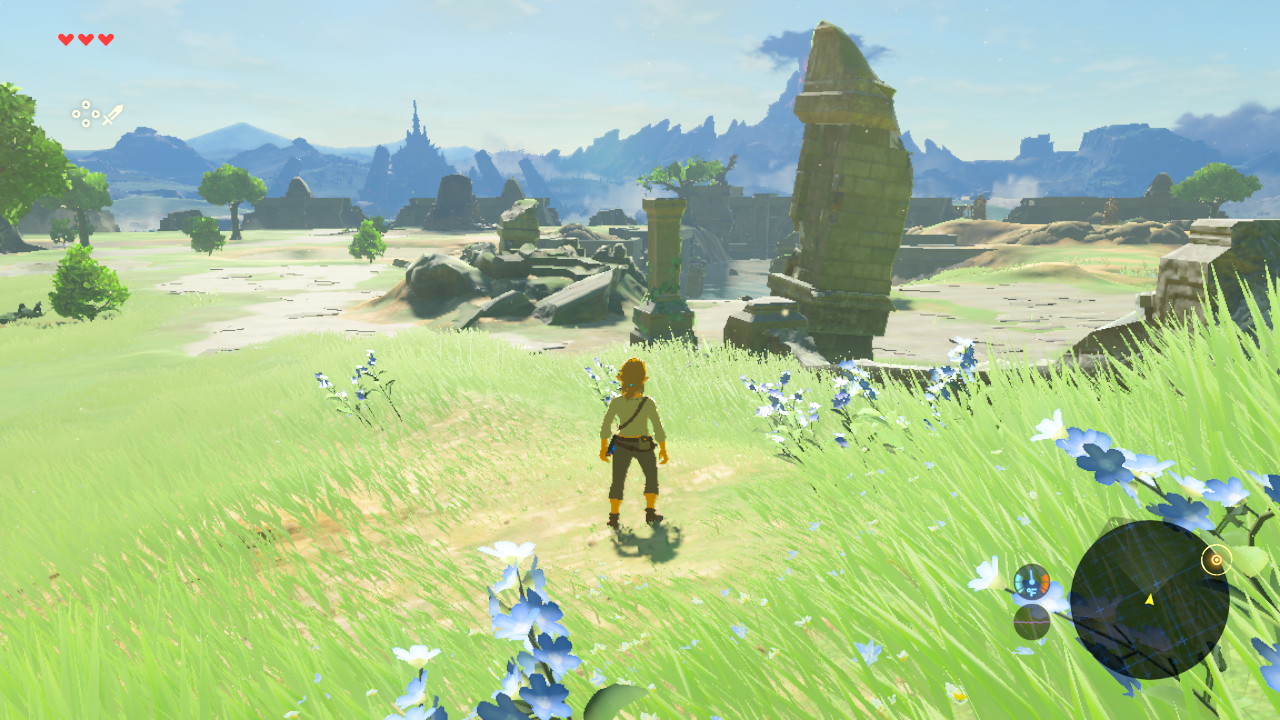 Nintendo’s The Legend of Zelda: Breath of the Wild successfully recaptures the magic of Ocarina of Time, a game that marked the series’ initial foray into three dimensions and the first Zelda title for the Japanese gaming giant’s Nintendo 64.

Back in 1998, there was something intrinsically compelling surrounding the ample sense of discovery present in Ocarina of Time, which I always felt was linked to the fact that I played the game at the young, impressionable age of 10.

The moment I left Kakariko Village and gazed out at the vast expanse of Hyrule Field, is etched into my memory, despite the fact that in comparison to other games released in the same era, Ocarina of Time’s world was not enormous.

After playing Breath of the Wild for 40 hours plus this past week, however, I no longer feel that’s the case. While Ocarina of Time’s Hyrule Field and its surrounding regions weren’t necessarily enormous, the game’s world felt vibrant and alive.

Hyrule wasn’t just large for the sake of being expansive like many later open world games (I’m looking at you, Morrowind and the rest of the Elder Scrolls series). Instead, every part of Ocarina of Time felt carefully handcrafted. There was always something exciting and compelling just over the next rolling hill to explore.

Almost 20 years later, Breath of the Wild for Nintendo’s new Switch console and the company’s ill-fated Wii U, evokes this same feeling of adventure and discovery, only on a more significant scale.

Beyond the vibrancy of its world and other factors like innovative controls, what made Ocarina of Time great is how the game frequently surprised the player. I often recall a specific moment near the start of Ocarina where I first encountered a wooden sign. I thought to myself, “I wonder what will happen if I slash at it with my sword?,” not expecting anything to actually happen. To my surprise, with each slice of my weapon, the sign shred into tiny splinters, until all that was left was a pile of thin wood resting on the ground beside a barren sign post.

While a small detail, this is one example of many instances throughout Ocarina of Time where by design, the game challenges the player to attempt something they may not think will work, but then it actually does. 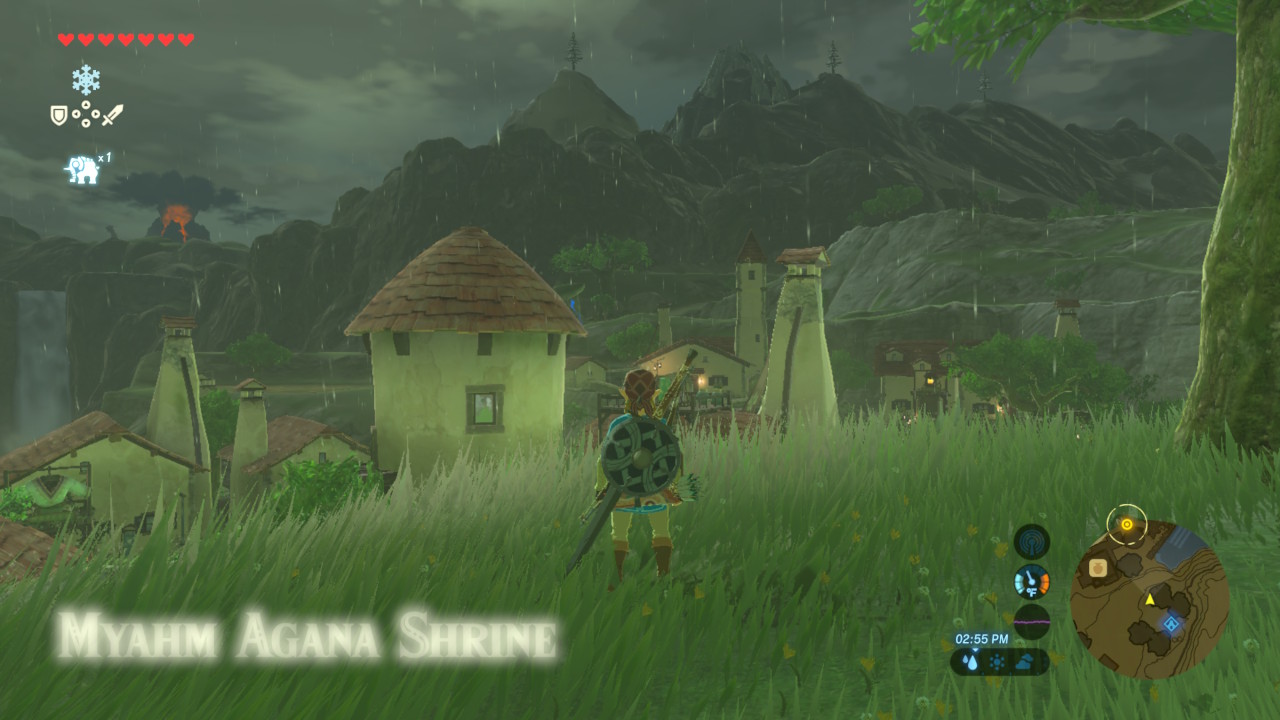 Breath of the Wild was developed with this same sense of freedom and experimentation in mind. The game still holds the core of what makes a Zelda game feel like a Zelda title — swords, Link, Zelda, Ganon and familiar faces like the Zora and Goron — but it also pushes the series’ core mechanics and tested tropes forward in a much-needed way. If, like myself, you’ve grown tired of the Zelda series dungeon, find-the-key-beat-the-boss, rinse, then repeat formula, Breath of the Wild is the Zelda you’ve been waiting for.

Instead of forcing the player through a lengthy gauntlet of tutorials, in Breath of the Wild, you’re thrown directly into the game’s world and given the freedom to do whatever you want. I’m also not using that phrase figuratively; a few hours into the game you really can travel to Hyrule’s farthest regions.

The only thing holding you back is your will to explore and the surprisingly vicious enemies patrolling the game’s snow-covered mountains, vast bodies of water and rolling countrysides. Breath of the Wild isn’t Dark Souls or Bloodborne, but five minutes into the game and if you take the wrong path, you’ll encounter foes that can take you down in with just one wallop of their bat. Weapons are breakable, combat is deceptively deep and you’re even able to brew up elixers and meals through a surprisingly comprehensive crafting system. 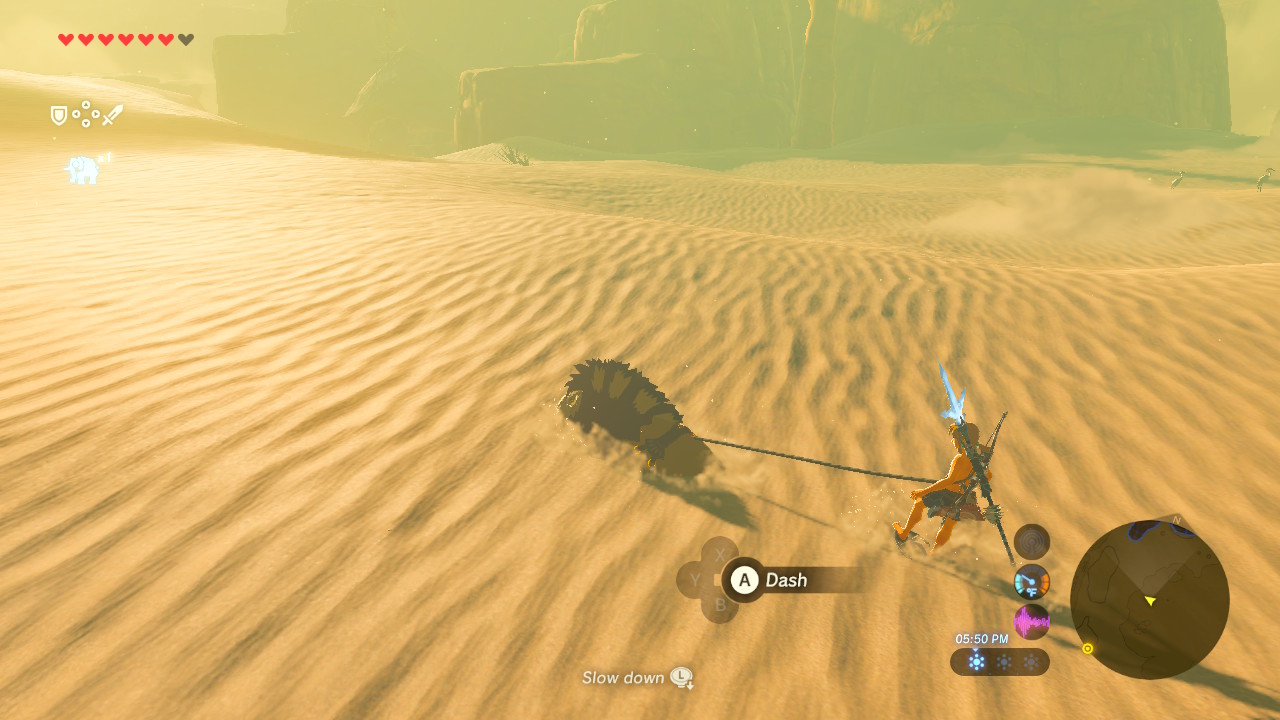 That massive tree you can see kilometres off in the distance? It’s climbable; and so is about every surface in the game, leading me to sometimes refer to Breath of the Wild’s version of Link as ‘Spider Link.’ More importantly, climbing is actually fun and challenging thanks to the game’s stamina meter, which forces you to experiment and seek less steep areas to climb, as well at to give Link moments of reprieve to catch his breath. I’ve climbed dozens of mountains in Breath of the Wild, for no other reason other than just because I could.

I’ve experienced various moments during my time with Breath of the Wild that show, rather than tell, why Nintendo’s latest Zelda offering is something special.

In one instance towards my first dozen or so hours with the game, I decided to explore the southern regions of the game’s map. I came to an area with numerous islands and decided to see if I could drift down to them from the edge of a cliff with the help of my paraglider. The distance seemed far, but given my previous experience with floating from high places in the game, I thought it might be possible. 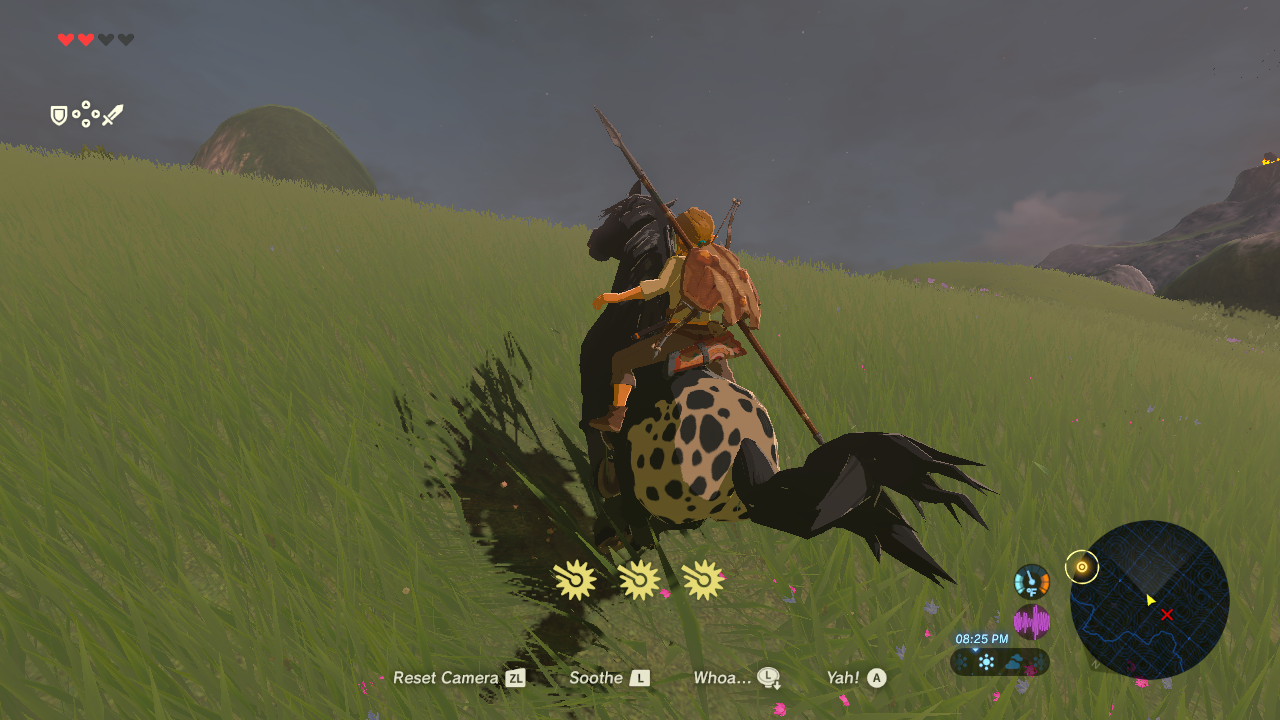 Once I landed, I spent time polishing off yet another one of the game’s ‘Shrines’ (there are over 100 in Breath of the Wild), before spotting another island far off in the distance.

I hopped on a sail boat conveniently sitting nearby, which I then powered by waving a large leaf in the wind. I soon arrived at ‘Eventide Island,’ a unique area of Breath of the Wild’s massive map. On Eventide, all of the items you’ve amassed over your journey are removed,  turning Breath of the Wild into the Legend of Zelda series’ version of Naked and Afraid.

The hours I spent exploring, experimenting and sneaking around, taking down enemies with very few weapons on Eventide Island, are some of my fondest gaming memories of the last few years. In one instance, I needed to transport a steel ball to a platform sitting slightly out from shore. To do this I cut down a tree, pushed its trunk over to where the platform was located, and walked out on it into the water, tossing the ball to its location. 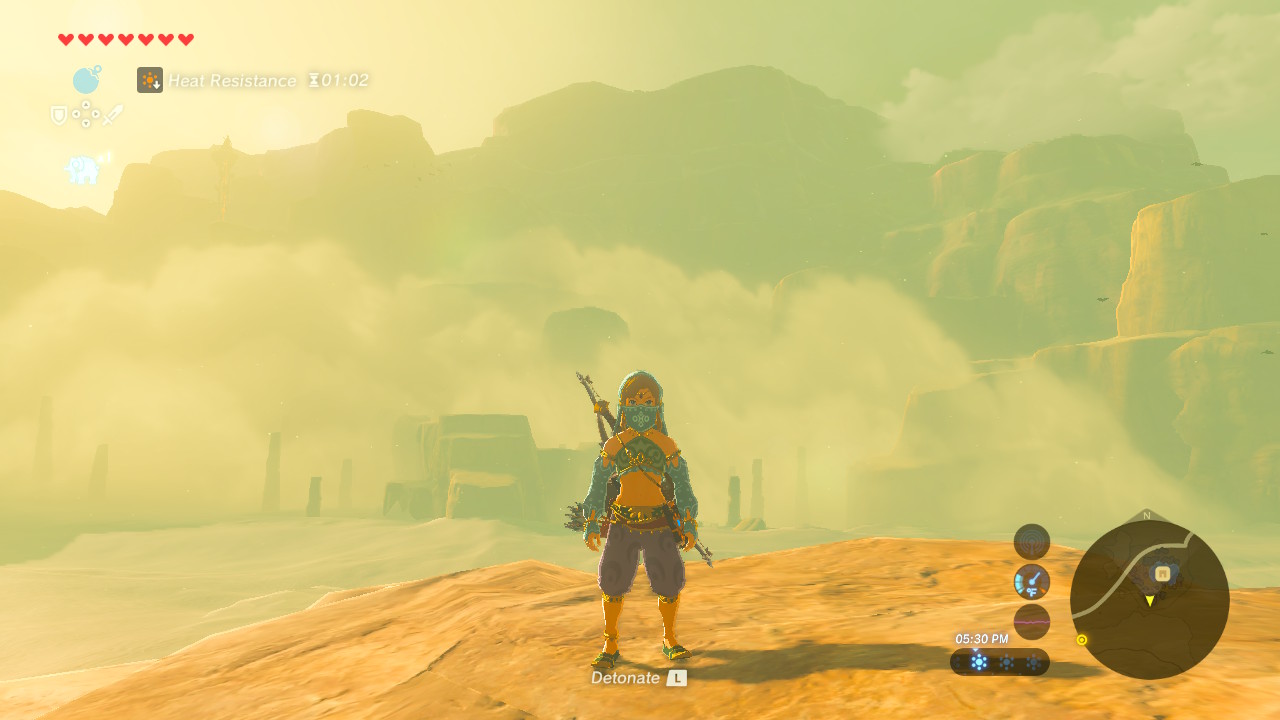 I later learned that I could have used Link’s Cryonis power to create ice blocks to achieve the same goal. This is, however, why Breath of the Wild is so special. Many of the game’s puzzles have different solutions and it is up to the player to decide how they want to solve them. If you think something might work, it probably does, even though it may not be the most direct solution.

In another instance I was gliding down from one of Breath of The Wild’s many towers that give the player access to a detailed map of the surrounding region. As Link drifted closer to the ground, I noticed a group of horses off in the distance. Rather than land and then move towards the animals, I decided to drift gracefully towards them. When I drew closer, the animals scattered, though I was able to catch up with one speckled horse, landing directly on its back while still gracefully gliding with the paraglider.

In another situation, I snuck up on an enemy encampment early in the game and peppered fire arrows at nearby bushes while hiding behind a rock. This caused the surrounding grass to catch fire, igniting the enemies. One particular foe took it upon themselves to run directly into an explosive barrel while still on fire, causing the enter encampment to erupt in an explosion, killing all the enemies. All that was left for me to do next was to walk into the charred camp and collect the enemies weapons and treasure. 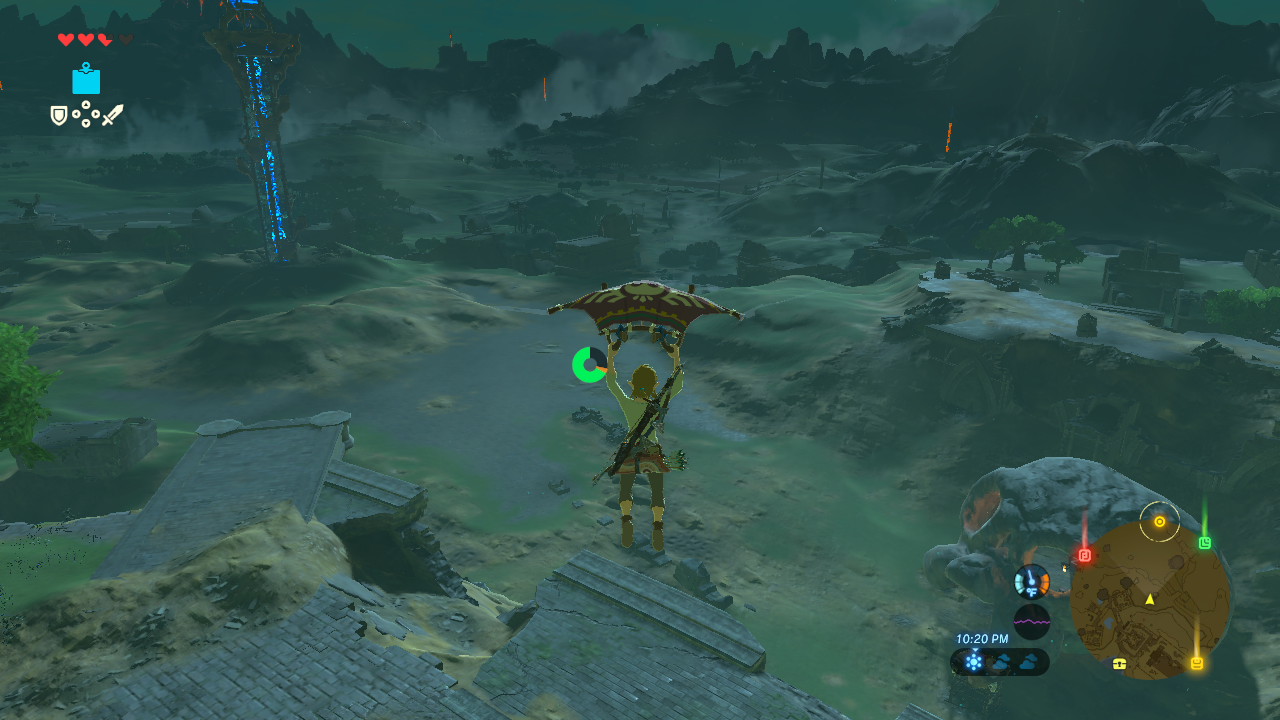 Breath of the Wild works because many of the game’s best experiences happen organically. The title is far from the first game to tout that you can “do anything” and “go anywhere,” but it’s the only game I’ve played to truly deliver on this promise.

Nintendo’s latest Zelda title is the only example of a game since the release of Ocarina of Time, where I actually feel like I’m going on an adventure and not just completing fetch quests and other menial tasks. 40 plus hours into the experience and Nintendo’s latest Zelda title is still finding ways to surprise me and is constantly in the back of my mind. The game isn’t perfect and can sometimes be visually underwhelming, especially when running at just 900p on a television and still experiencing occasional bouts of lag. None of these issues, however, detract from the impressive experience the game offers in any significant way.

Not since the release of The Last of Us have I been this impressed, enthralled and generally just hyped up about a game.

While it’s still too early to know for sure, Breath of the Wild seems poised to heavily influence the future of game design, similar to the original Zelda for the NES from 1985 and even 1998’s Ocarina of Time.

This Week in Gaming is a weekly column where MobileSyrup takes a look at a major title released in the world of video games.