Xbox One X: 4K console gaming is promising, but should you be interested? 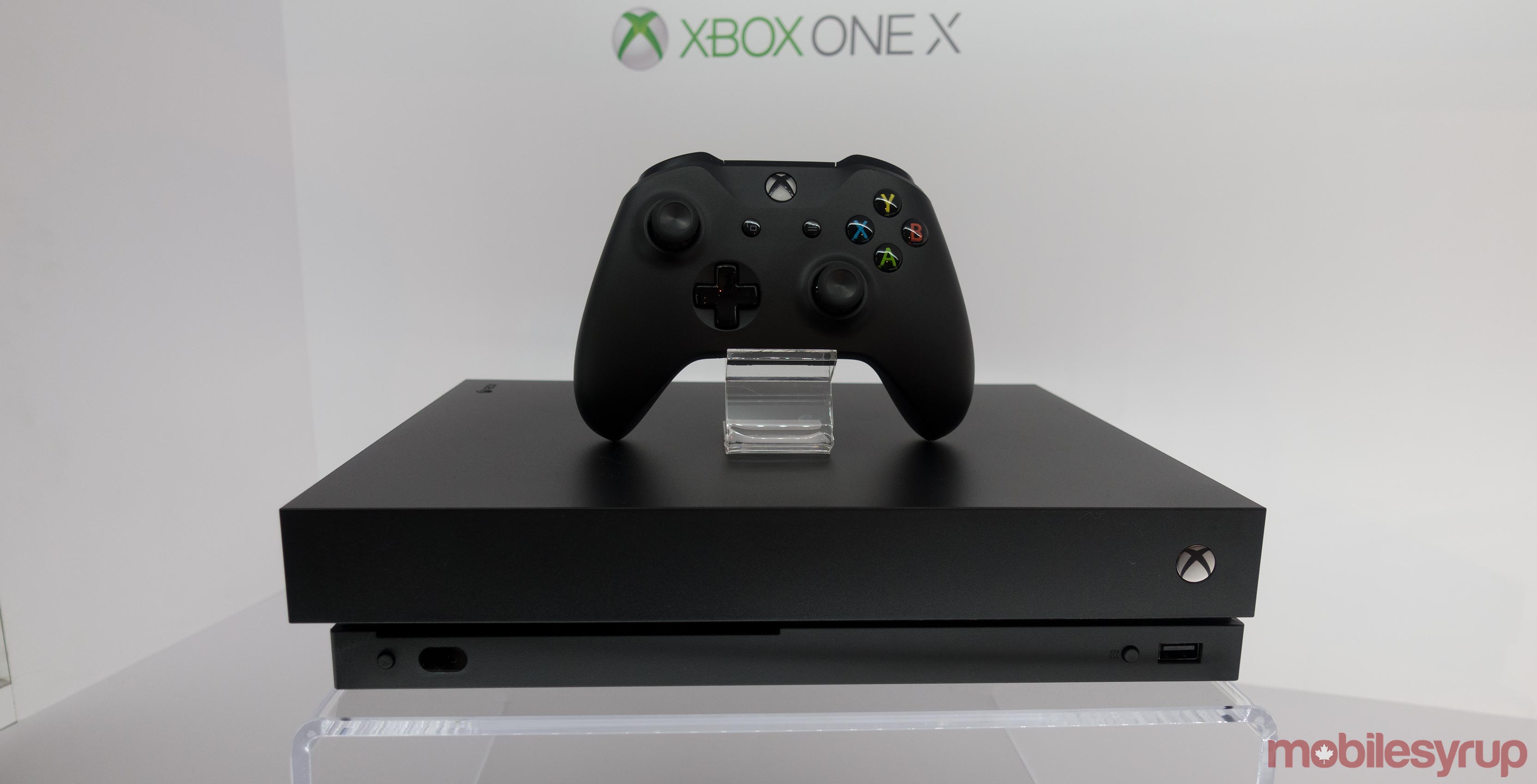 This year, at the annual premier video game event Electronics Entertainment Expo (E3), Microsoft officially revealed the Xbox One X — an upgraded, 4K-capable version of the Xbox One console.

The system is set for launch on November 7th at a cost of $599 CAD and is aimed at being a beefier, true 4K-capable mid-generation console update than that of last year’s PlayStation 4 Pro. Sony’s upgraded console, which costs $499 CAD, wasn’t as big of a technological leap forward, instead needing to employ upscaled 4K, rather than outputting the resolution natively. 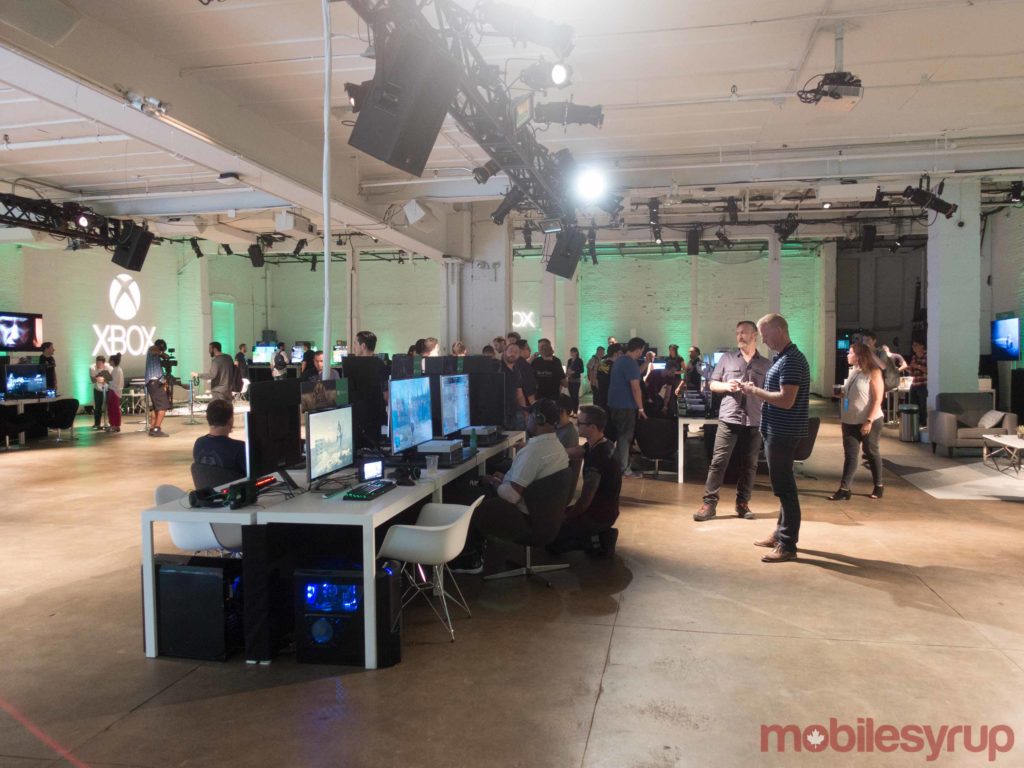 The Xbox One X, on the other hand, is able to run games in true 4K HDR, which Microsoft is looking to leverage to offer gamers the best possible experience.

Last week, I flew out to New York to attend the Xbox Showcase Experience, a behind-closed-doors event offering access to a variety of Xbox One X titles, as well as opportunities to meet with some of the games’ developers.

Given my multi-hour experience with all of the games, I came away with several takeaways about the state of the Xbox One going into holiday 2017 and beyond, particularly within the context of the Xbox One X.

A fresh coat of paint

I’ve used the term 4K a lot, and while that is a major selling point of the Xbox One X, it is far from its only feature. Games can benefit from greater draw distances, crisper, higher texture fidelity, wider colour gamuts and more.

Microsoft wants you to have a library of these 4K-ready games from the moment you buy an Xbox One X. The exclusive games will naturally be updated, including the already released Halo 5, Gears of War 4 and Quantum Break. As well, a number of major publishers have pledged support for the Xbox One X, such as Square-Enix (Final Fantasy XV), Warner Bros. Games (The Witcher 3: Wild Hunt) and EA (Star Wars: Battlefront II). Altogether, Microsoft has stated that over 100 games will be enhanced in some way by 4K at launch, with more titles receiving support as time goes on. 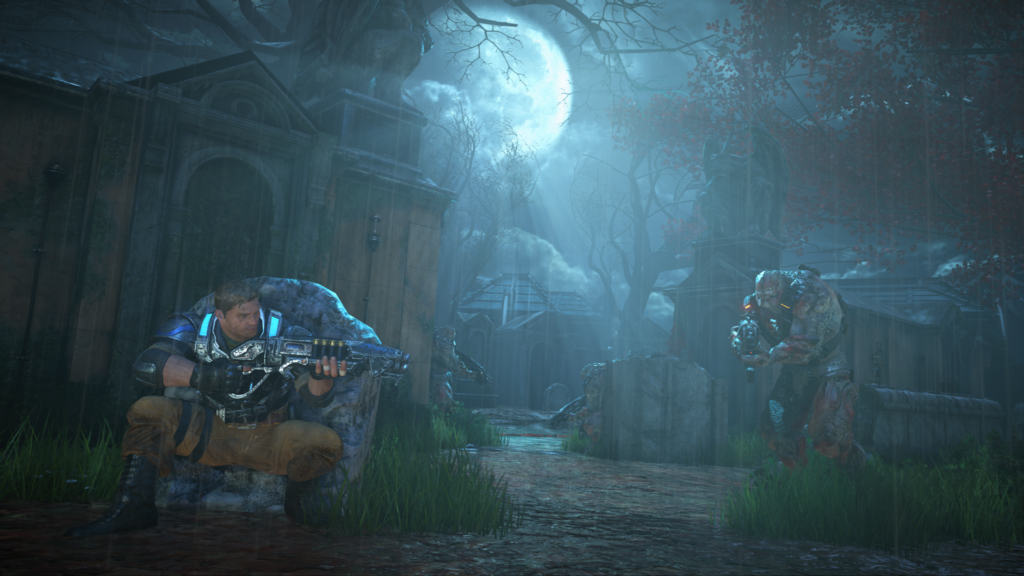 What is arguably the flagship title showcasing the Xbox One X is Forza Motorsport 7, Turn 10 Studios’ latest entry in the popular racing simulation series. Set for release on October 3rd, the game features some truly impressive true 4K, 60 fps performance.

What’s more, weather effects such as rain trickling down a vehicle or wetting the racetrack, hyperrealistic lighting and flecks of dirt and other scuff marks along car doors truly come to life in the 4K HDR-enabled game.

For comparison, certain games at the event also had their regular HD and 4K HDR counterparts on full display alongside one another At the event, an Xbox One S was set up playing Middle-earth: Shadow of War in 1080p. 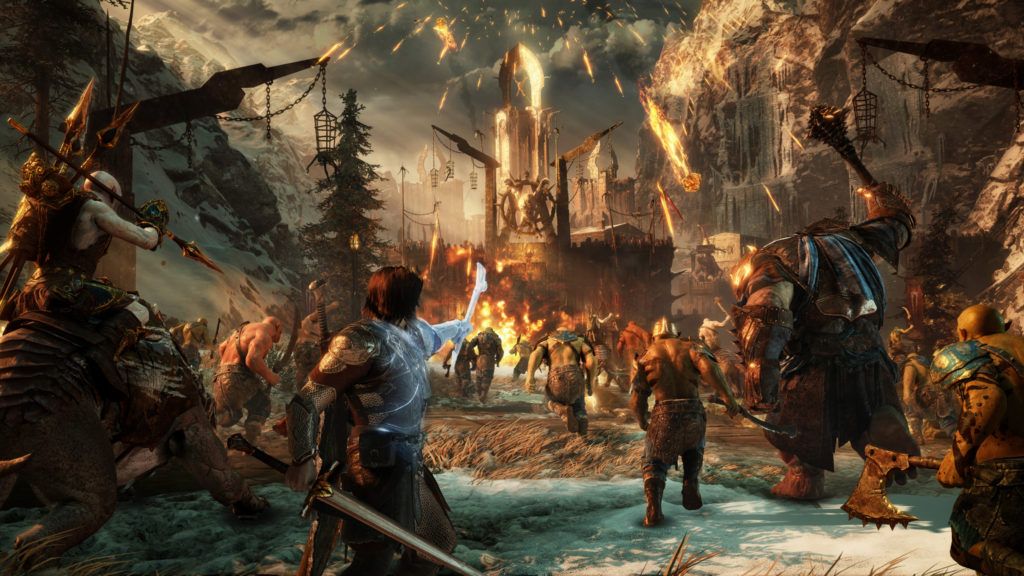 Beside this, there was an Xbox One X running Shadow of War in native 4K. The difference was quite apparent, with the sheen on protagonist Talion’s cape more pronounced, lighting from the flickering fortress torches brightly lighting the throne room and the overall detail appearing more crisp and aesthetically pleasing.

Older games look great, too. I put over 30 hours into Rise of the Tomb Raider on the original Xbox One, and the already-impressive looking action-adventure game looks even better in true 4K on Xbox One X.

With crisper lighting, and even improved ‘Tress FX’ for Lara Croft’s hair movement, the game looks even more stunning.

As well, Rise of the Tomb Raider is one of several titles that gives players the option to switch between modes that prioritize visual fidelity (keeping resolution as high as possible while at a steady 30 fps) or framerate (maintaining 60 fps at a consistent 1080p). This is similar to the ‘Boost Mode’ feature found on the PlayStation 4 Pro.

X Gon’ Give it to Ya… somewhat

However, while the quantity of 4K-enhanced games is present on the Xbox One X, there has also been some concern regarding the quality of them — that is to say, the extent to which titles will benefit from the improved hardware.

Will they be in true native 4K output, or instead be displayed through the checkerboarding technique used in the PlayStation 4 Pro to approach 4K fidelity? 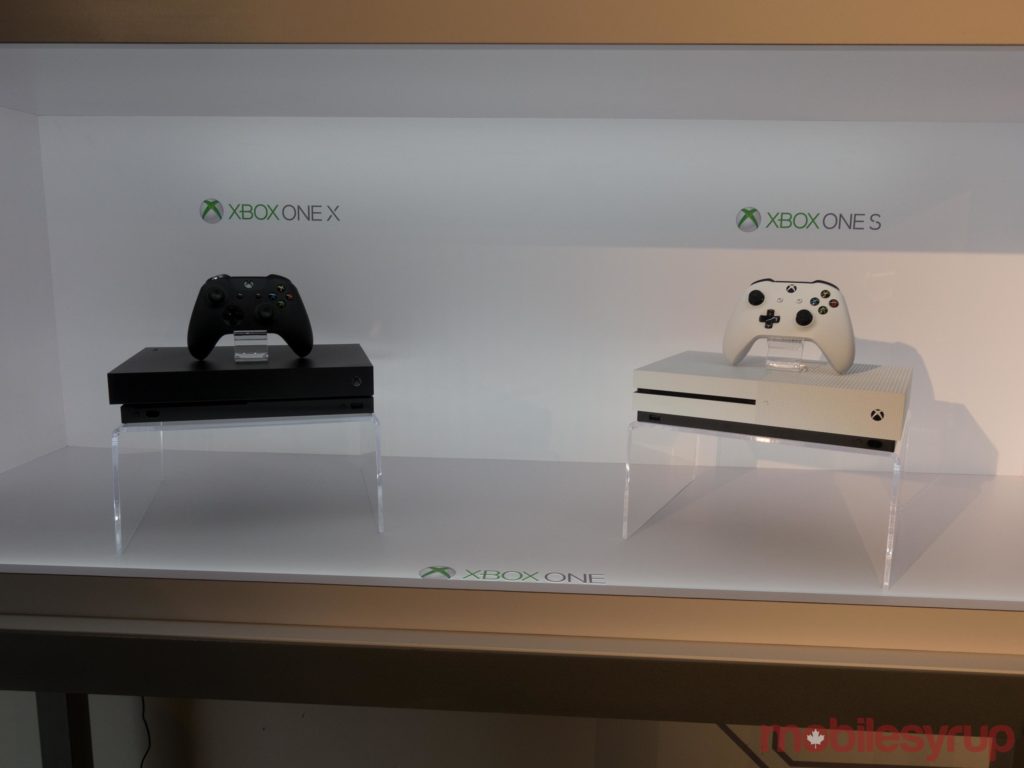 This was a takeaway that MobileSyrup senior editor Patrick O’Rourke had when he was in attendance at this year’s E3 convention. Many games shown during the event were confirmed to be Xbox One X enhanced, although the majority of them were not described as being displayed in true 4K.

In an interview, Xbox chief marketing officer Mike Nichols told us that the majority of the games shown off during the company’s keynote were in 4K, although they were a mixture of either true or checkerboarded. “We do expect more to come in the future,” said Nichols regarding Xbox One X titles in true 4K.

Regardless of how the visual fidelity is achieved, and just how “legitimately” 4K they may be, the games still look great as they are, no question. However, those looking for the absolute true optimal 4K experience with every game may need to wait a little longer for that to become more prevalent.

Getting the Xbox One X in players’ hands

Simply put, the Xbox One X is also expensive. As mentioned earlier, the beefy console will set you back $599 CAD, and that’s to say nothing of a 4K/4K HDR TV to truly the get most out of the system.

But Microsoft knows this. Phil Spencer, the head of Xbox, has spoken about how the system as a more premium, luxury alternative for the hardcore gamer, while its slew of affordable Xbox One S systems are there for the larger demographic of casual, everyday players. 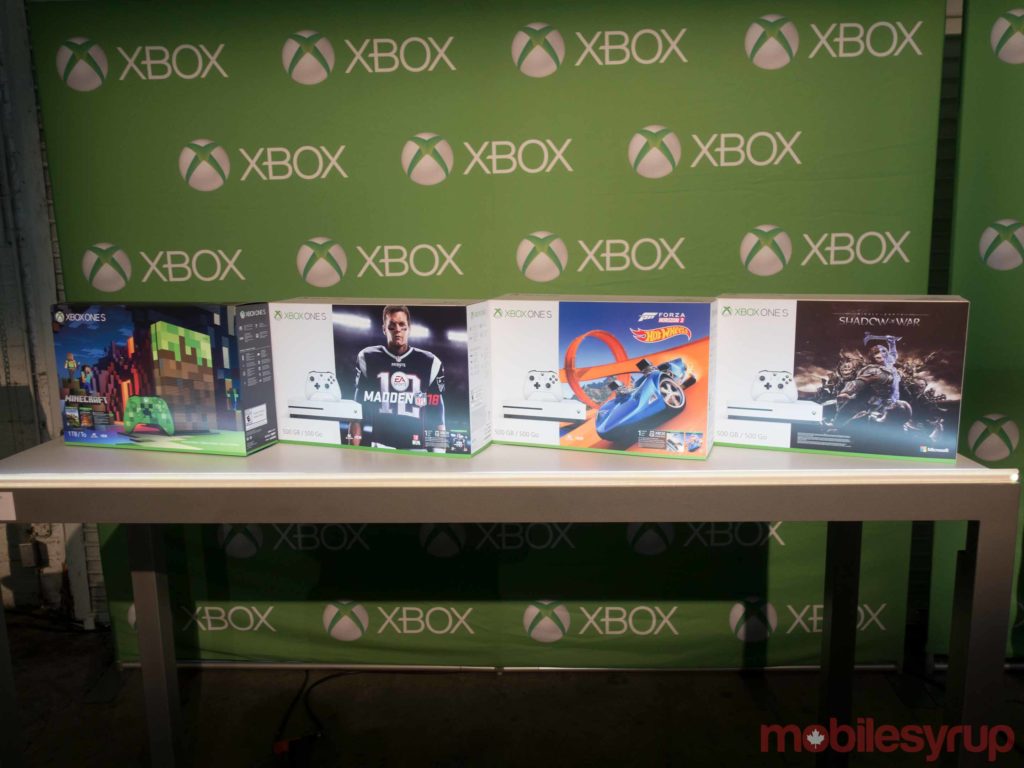 Rather, my main concern doesn’t lie with the Xbox One X’s pricing, but instead how it’s going to be promoted. By that, I don’t mean the sort of flashy, celebrity-filled ads you’d maybe see on YouTube and TV.

Clearly, 4K is a visual feature and as such, it needs to be seen in person to truly be believed. A YouTube video won’t cut it. Having seen a number of high-profile upcoming games run in 4K in person, such as Shadow of War and Sea of Thieves, as well as ones I’ve already played extensively, such as Quantum Break and Rise of the Tomb Raider, I can certainly attest to the improvements made with visuals and gameplay smoothness.

But it’s one thing for people like me to tell you how great all this is; it’s another for you to see it for yourself. In the past, Microsoft has held an annual ‘Xbox Media Showcase’ event in Toronto. There, gamers would be able to try out a slew of upcoming Xbox games, including Quantum Break, Cuphead, Halo 5 and more. Some developers were even in attendance, such as 343 Industries’ Tim Longo, director of Halo 5. 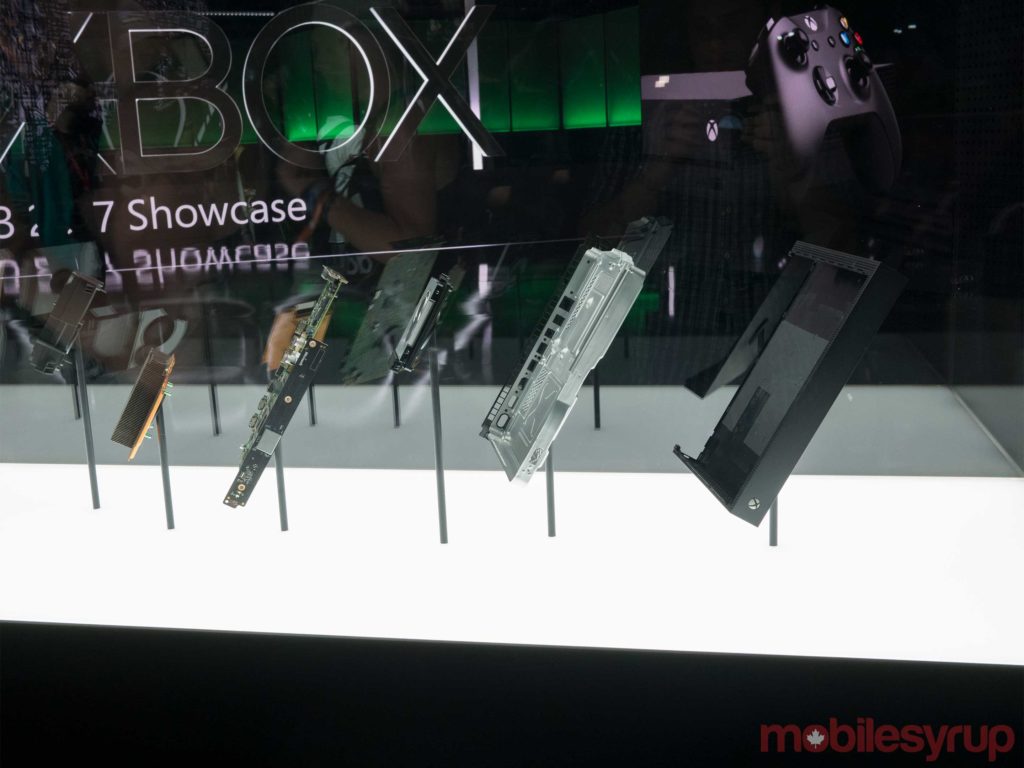 This opportunity to go hands-on, as well as speak to representatives of each respective game, is a highly informative experience, so it’s unfortunate that Microsoft has opted to not hold one in 2017, at least thus far. I initially expressed concern over a possible lack of demo opportunities of the Xbox One X shortly after the system’s formal unveiling during our E3-centred podcast. Since then, however, the only major public event in Canada featuring the Xbox One X in a playable capacity has been Fan Expo Canada.

It remains to be seen if Microsoft will hold similar events throughout 2017 and beyond. Alternatively, the company can also look to partnerships with retail giants like EB Games and Best Buy for public demos of the Xbox One X in their brick-and-mortar stores. This is similar to what Sony has done with its PlayStation VR headset — another piece of hardware that truly needs to be experienced firsthand in order to be fully understood.

The future of 4K console gaming is here

Going forward, I’m optimistic about the future of the Xbox One X. Unlike the PlayStation 4 Pro, which was a small incremental upgrade, the Xbox One X is far more powerful and only costs an additional $100 CAD. At the same time, the number of supported game also seems to be higher, with many receiving Xbox One X enhancements at or around launch time.

Significant interest seems to be there, too, with Microsoft saying that initial pre-orders for its custom-engraved Xbox One X Project Scorpio Edition console had sold out faster than any other Xbox system in the history of brand. However, just how many units that actually is, exactly, is currently unknown, so that hallmark may only be representative of a small number of gamers.

What I can say is that having had extensive hands-on time with the system, I’m sold on the system’s potential. Here’s hoping that others will be given the chance to feel the same way.