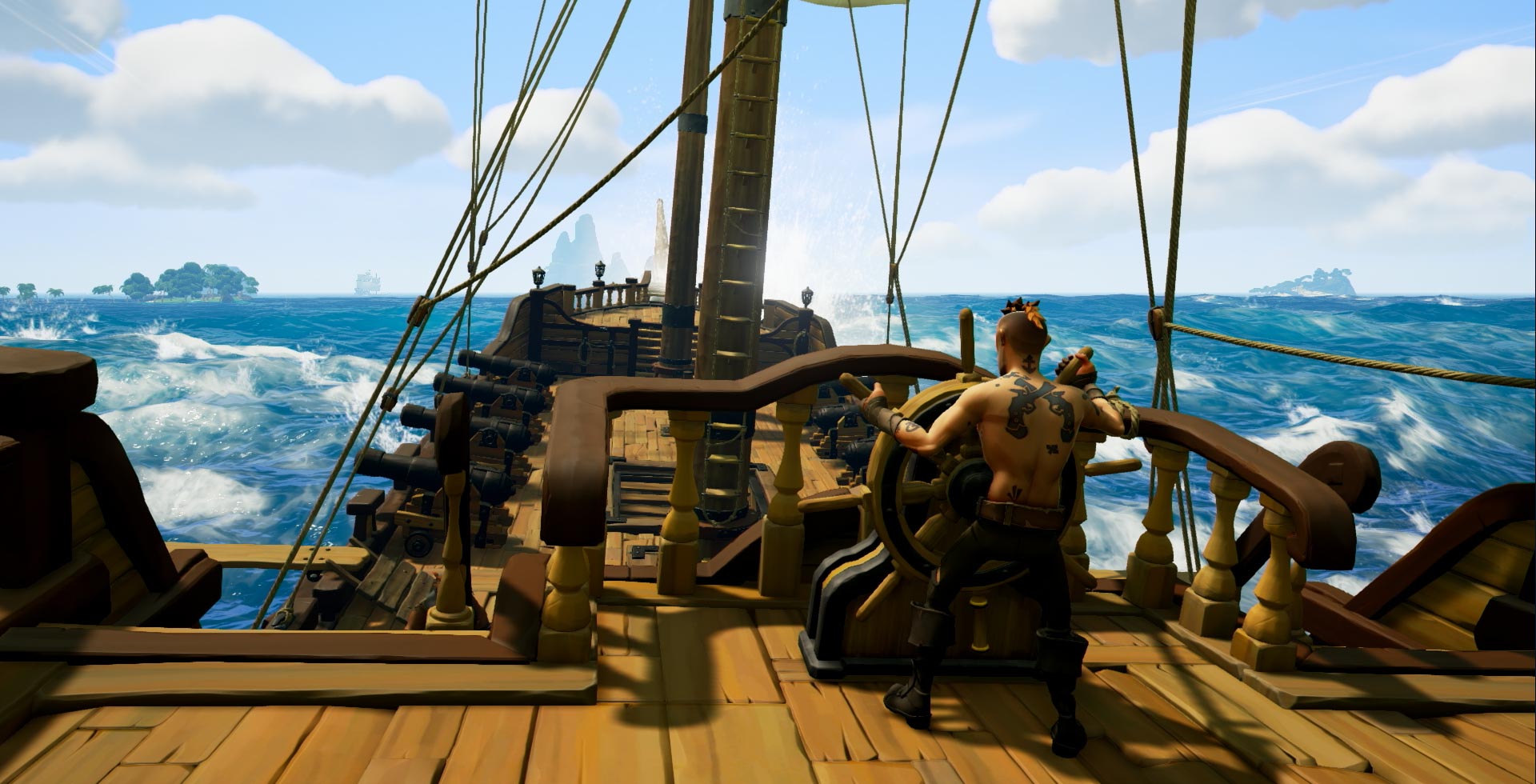 Sea of Thieves is poised to be the pirate game I’ve always wanted.

Although I only spent a brief amount of time on the E3 2017 show floor with Rare’s first new title in a number of years, it’s possible the Sea of Thieves could be one of 2018’s first great multiplayer titles. Early videos and trailers of the title don’t do it justice; Sea of Thieves is the uncommon type of game that needs to be experienced first-hand to understand what makes it so special.

“We believe passionately that Sea of Thieves is the pirate game that players have always wanted. We think Sea of Thieves captures that romance, we think it captures the feeling of being in a pirate world,” said Mike Chapman, design director on Sea of Thieves, in a recent interview at E3 2017.

Microsoft and Rare, however, are taking a significant chance with Sea of Thieves. Introducing a new property, especially one that doesn’t exactly demo well on stage or in trailers and that has experienced a lengthy development cycle, is not an easy task.

How the quirky multiplayer title got the green light from Microsoft is also an interesting tale. A small team at Rare built a working prototype in Unity, a popular development engine, that was designed to show off the core experience of the game on a basic level. Within about five to six months of tinkering with a working prototype, the studio knew it has something Chapman refers to as “magic.” This initial experimentation was also kept quiet from the head of Xbox at Microsoft, Phil Spencer, said Chapman.

“We were just like, ‘we’re doing something new.’ We’ll pitch it to you when we’re ready,” said Chapman, explaining how his studio kept the first few months of Sea of Thieves development a secret. “They [Microsoft executives] came to Rare and we actually pitched the game for like 25 minutes. Here’s the vision; and now you’re going to play it,” said Chapman. 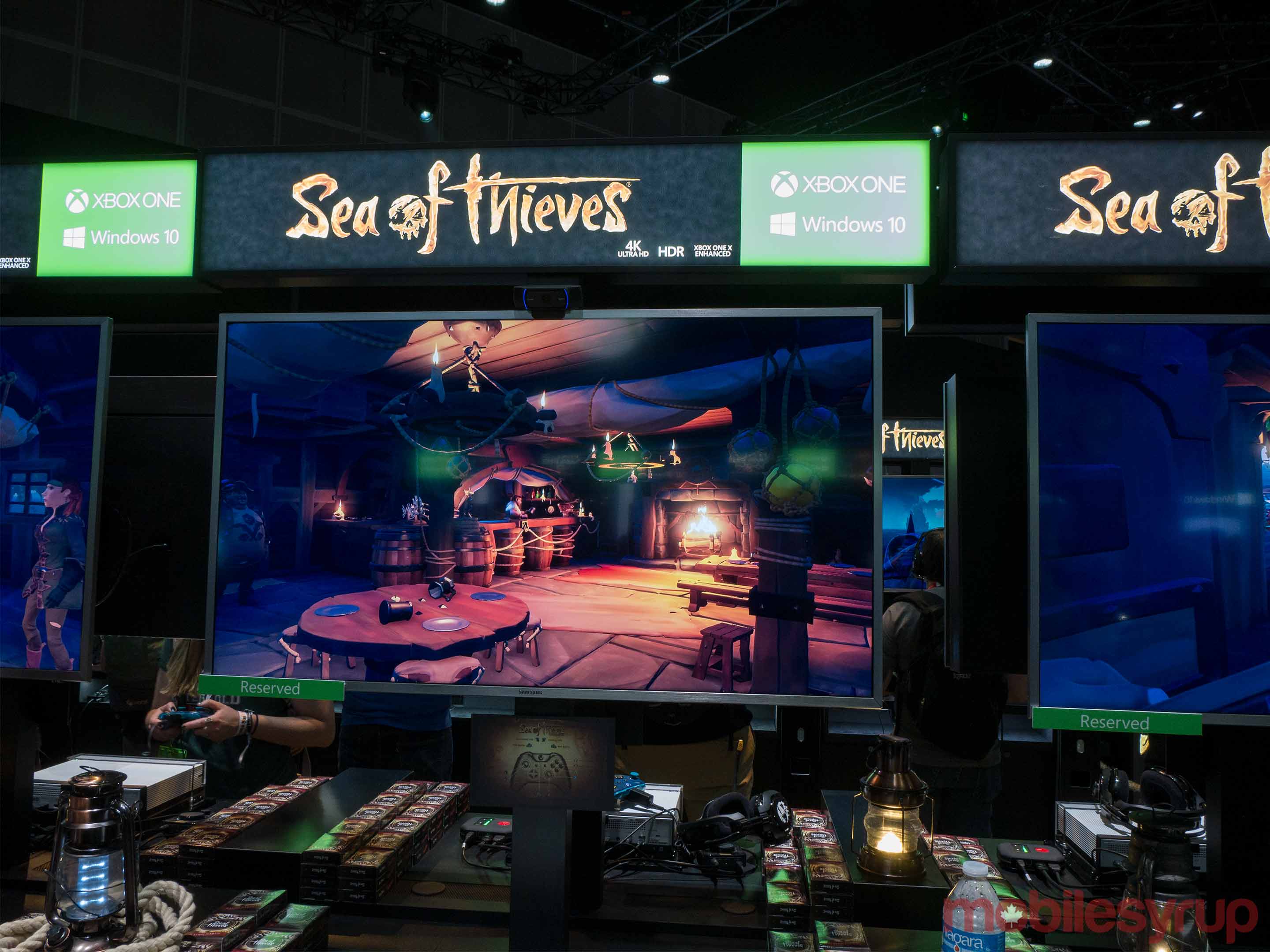 Chapman says that he got a number of Microsoft executives, including Spencer, to play the prototype and that he and his team felt so strongly about the experience they created that they weren’t concerned about presenting the title in this unorthodox way to a group of high-level Xbox employees.

In Sea of Thieves, you and a crew of friends hop into a boat and sail the white cap filled high seas; in fact, the game has some of the best looking rolling waves I’ve ever seen in a video game.

My hands-on experience was guided by a developer at Rare, which is a smart move on the developer’s part given how intimidating it can be to get into the title at first, though Joe Neate, executive producer on Sea of Thieves at Rare, says that this isn’t a concern for the studio.

“Our goal and our belief is to never have to put a tutorial in. As we keep growing and keep adding new players — I think there are small things that we do to kind of hint things to players, like a circle on the map around outposts… The joy of discovery in our game is what makes it so special, like the joy of learning how to sail a ship and it actually bonds players together,” said Neate.

My ragtag group of players made the decision to steer towards a large island. We raised the ship’s anchor by collectively turning a wheel, allowing the ship to begin moving. I then somehow found myself at the vessel’s helm like the pirate captain I’ve always aspired to become some day.

One member of my team raised the sails and angled them into the wind, which is shown visually by tiny white jet streams running above the sail. If you don’t angle the sail properly, you won’t gain much speed, making it difficult to travel across the game’s map at a reasonable pace and also vulnerable to possible attacks from rival pirates. 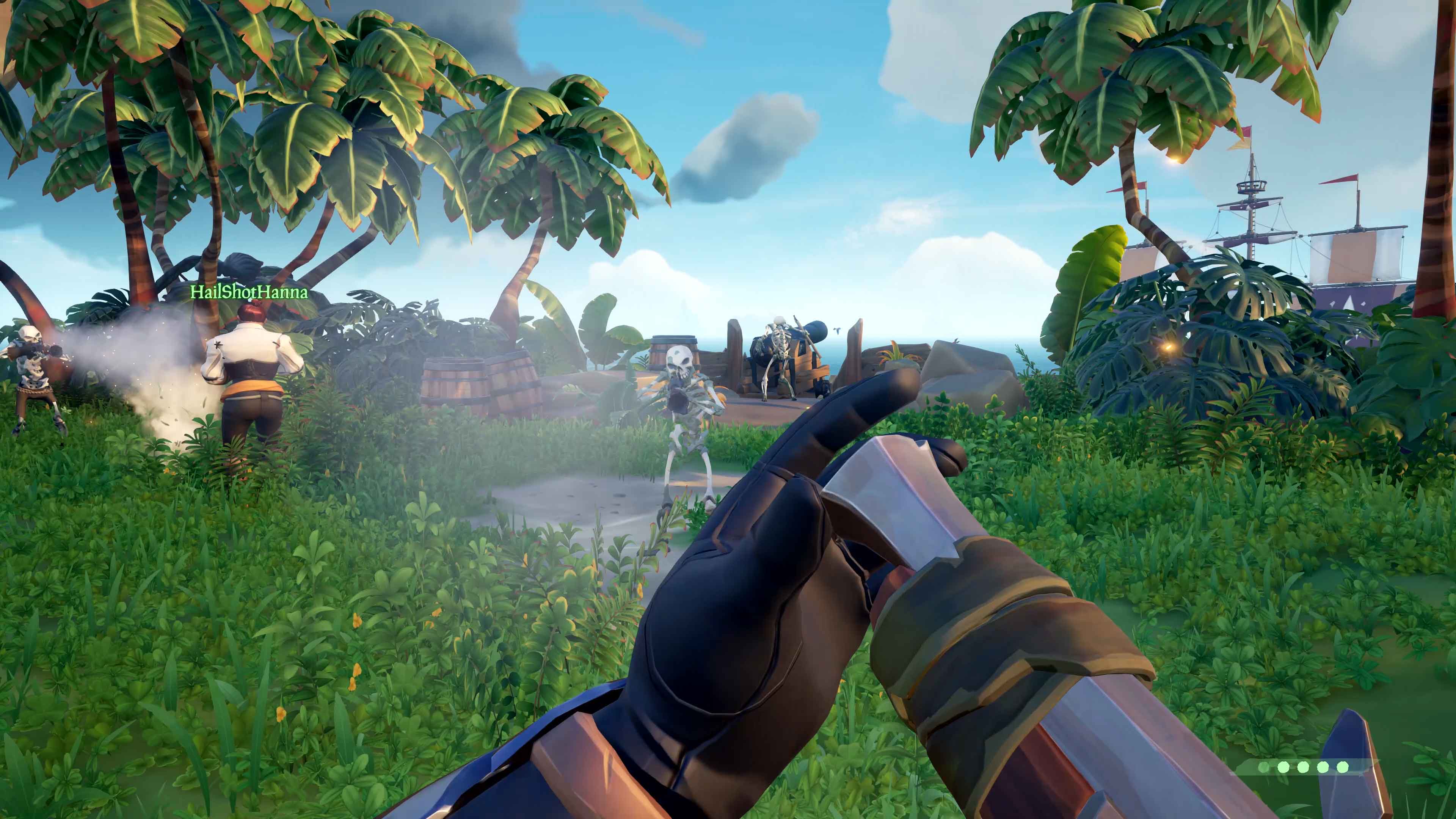 Since the captain of the ship can’t actually see where they’re going, I quickly smashed into a nearby outcropping of rocks. One member of my squad then went down to the boat’s hull to look at the map and verbally guided me, giving me simple directions like, “continue west,” or, “shift a little bit to the south.”

We landed on the correct island and began searching for buried treasure, a task that’s difficult given the game doesn’t feature a radar or mini-map system — the map in the ship’s hull is your only method of locating landmarks and buried goodies. We memorized where ‘the ‘X’ that marks the spot, ‘was and then proceeded to pull out our shovels and dig.

I grabbed the chest and travelled back to the ship as my crew fought off hordes of incoming undead skeletons with swords and guns, lugging the treasure through the water. Once we made it back to the boat we took our positions and set sail to the nearest outpost. Unfortunately, a rival group of pirates appeared shortly into our voyage and started spraying canon balls in our direction. Our ship quickly took on water and we were’t able to put together a formidable defence quick enough.

In the final moments before the ship sank while my team’s crew was frantically trying to bail water out of the boat, I ran down to the hull and grabbed the treasure chest. So when the ship sank, I still had our treasure, a move that surprised my team as well as the Rare developer helping guide our demo experience.

Time ran out in the demo before we were able to find our ship’s spawn point and reembark on our voyage. While my time with Sea of Thieves was relatively short, I experienced a number of moments and unique situations I’ve never found myself in before in a multiplayer environment.

While my overall experience with Sea of Thieves was positive, there are areas where the game could use work, including the fact that its controls feel floaty and inaccurate. The game’s art style is unique, but it also isn’t as good looking as it could be. It’s also unclear if it will run in ‘true 4K’ on the Xbox One X, or if it will take a checkered box approach to ultra high-definition, according to Neate. 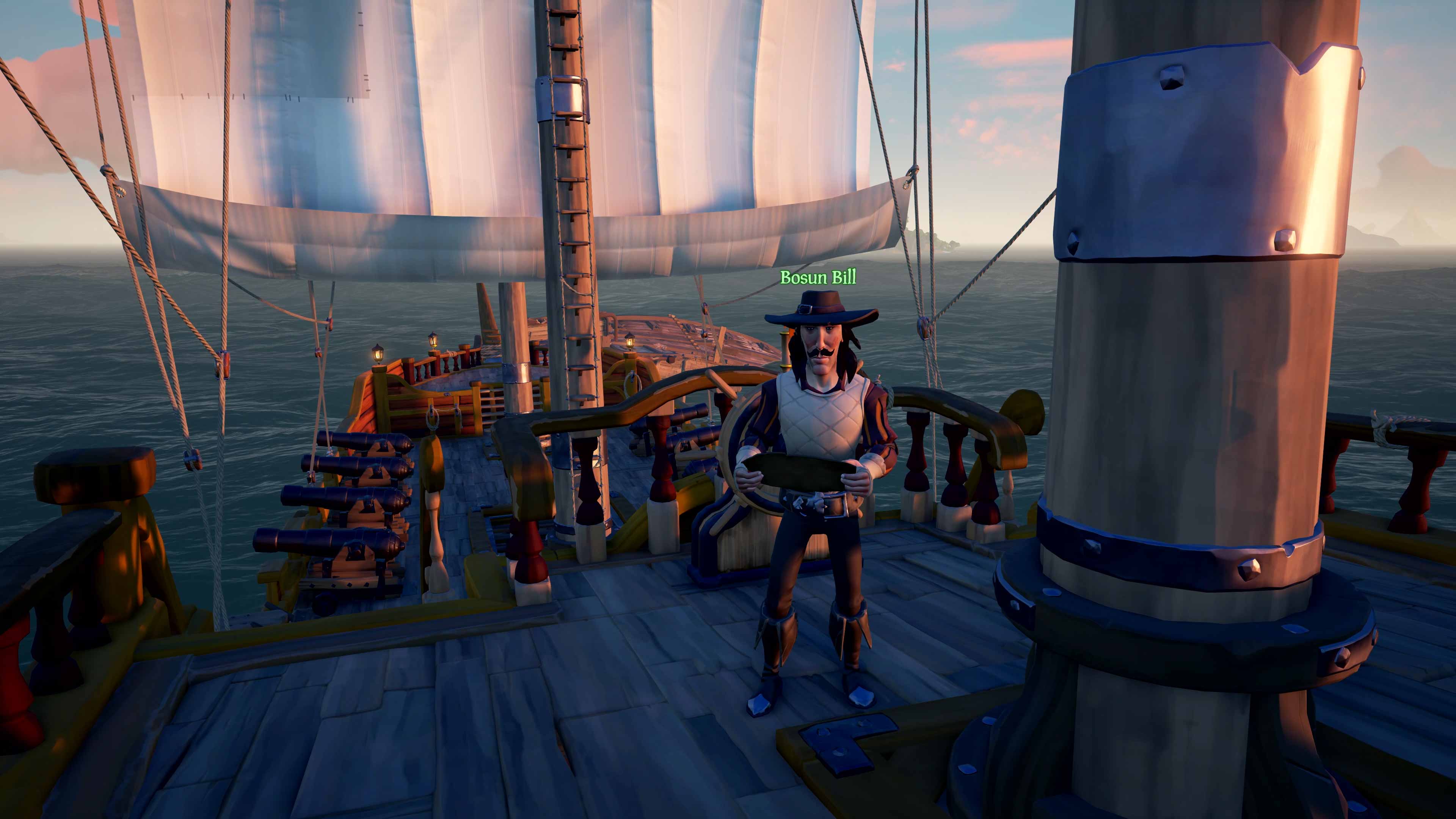 “We haven’t really got to quips with it yet,” said Neate, explaining that his team hasn’t spent enough time with the Xbox One X yet to make a final decision on 4K. “We kind of got it running in about half a day, but then we were like ‘it’s time for E3 now.’

Currently there is no cross-play multiplayer between Xbox One and PC players, though Neate says this is a feature that the team is currently testing.

Sea of Thieves is set to be available on the Xbox One and PC at some point in early 2018.