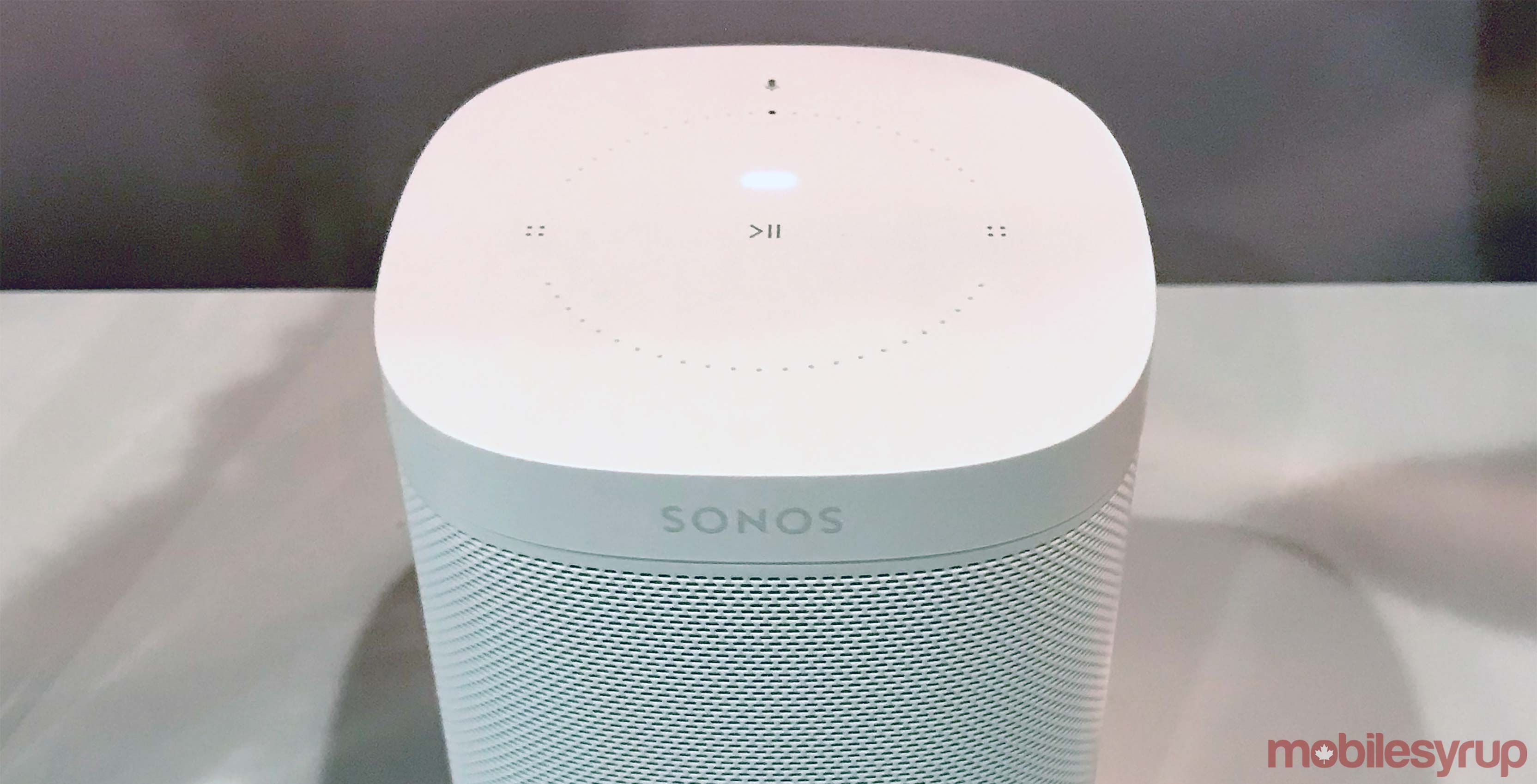 Sonos unveiled a new speaker to go with an array of announcements that will take the popular multi-room sound system into the realm of voice control and smart home.

The Sonos One is effectively a reconstituted Play:1, except for a slightly smoother frame, new controls at the top and built-in microphones to enable hardware-based voice control. That voice integration will begin with Amazon’s Alexa, starting in public beta today, but will then roll out further to include Google Assistant in 2018. 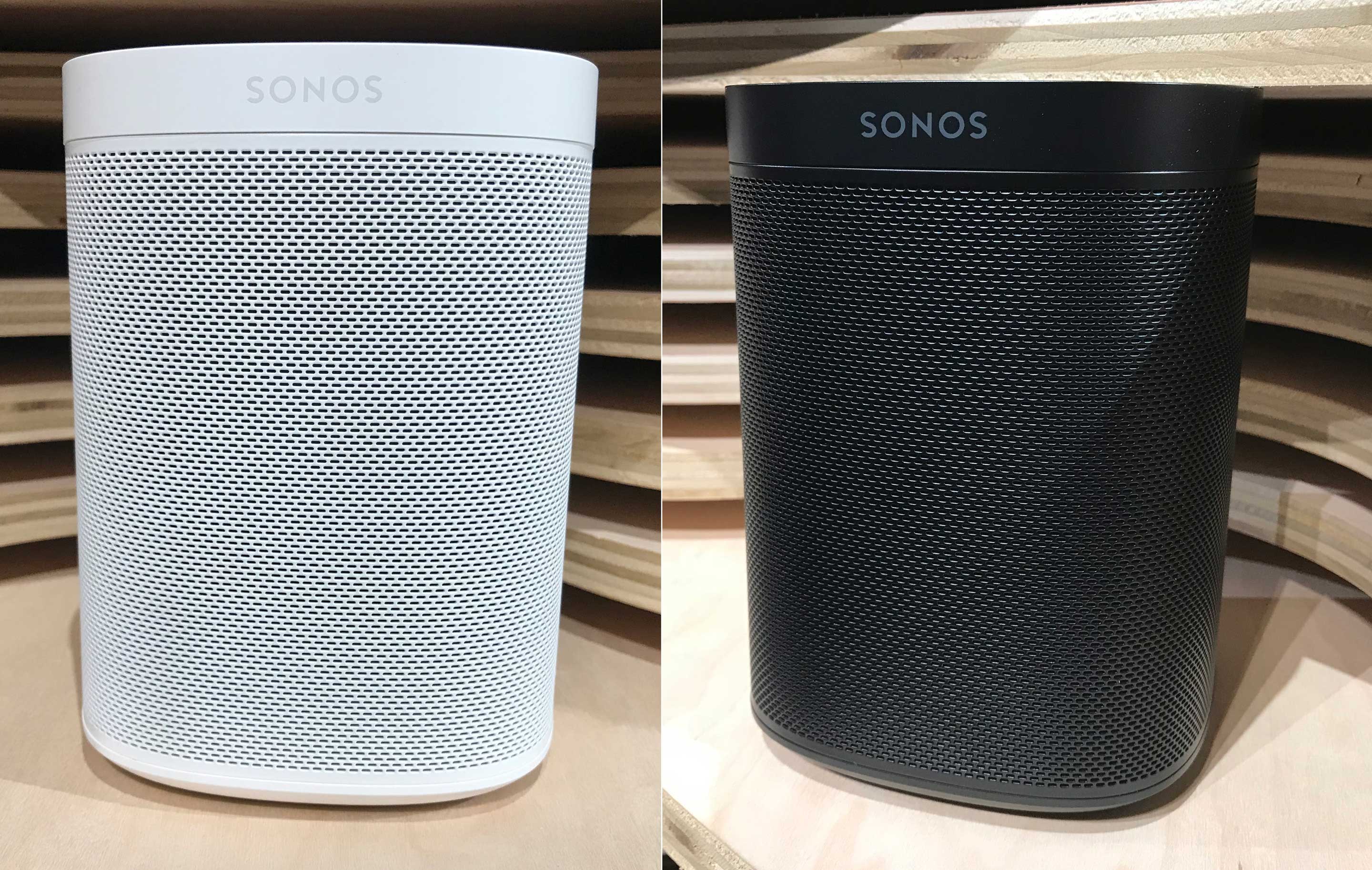 Alexa still isn’t officially available in Canada, and despite rumours of an impending launch in the Great White North, nothing has been confirmed yet. Even so, Canadians who purchased an Alexa speaker, like the Echo or Echo Dot, can still try out Sonos’ new penchant for verbal commands with existing speakers in the company’s lineup.

More on that a little further down, but first, the Sonos One.

Comparing the Sonos One’s form factor to the Play:1 is obvious. Apart from different components inside, it’s still the same footprint, meaning the company chose not to go big with its first truly hardware-based voice-activated speaker. The Play:5 does have built-in mics, but there weren’t six of them, nor were they even enabled for any reason. They still won’t be under this scenario. The Play:5 will use the same software-based compatibility the other speakers will use through an Alexa speaker.

Being almost a clone of the Play:1, the Sonos One can’t be paired with a Play:1 for left and right channel stereo setups. You would need to have two Sonos Ones to make that work, just like you would have for the Play:1, Play:3 or Play:5.

On top of the Sonos One are touch-based controls to play/pause, skip/repeat, control volume and turn off the microphone. Swiping gestures navigate those controls, though the microphone is a dedicated button. The only way to turn the mic off is to physically push the button — there is no way to do it through the Sonos app. 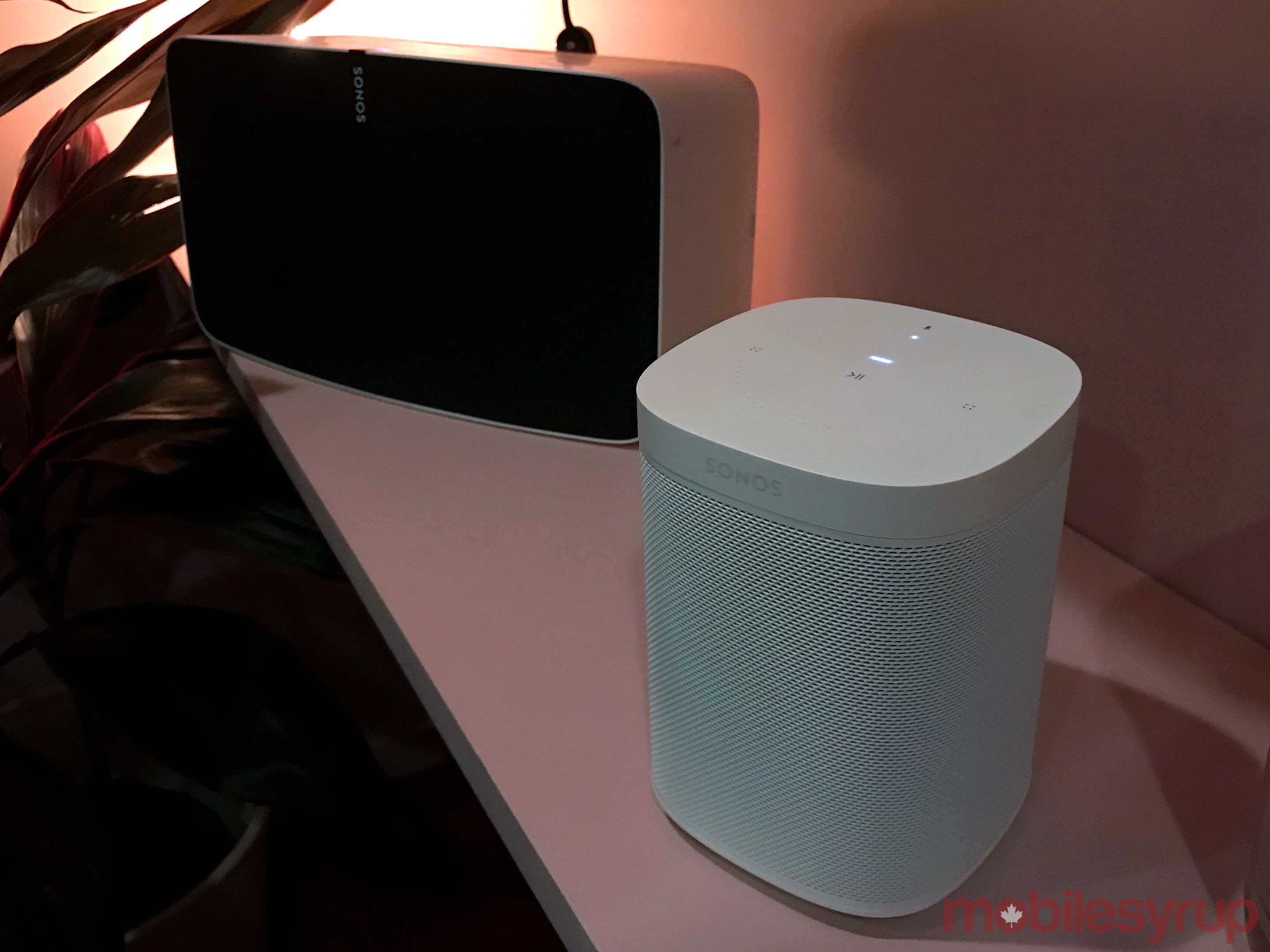 The six internal mics will work in tandem with noise-cancellation technology that Sonos says will be effective at listening for commands over music. This doesn’t appear to be anything uniquely different from the far-field voice recognition the Amazon Echo and Google Home use.

Indeed, the voice recognition for me was basically the same as how I have used an Echo Dot paired with another speaker. In fact, the Play:5’s Aux-In port previously allowed it to become a ‘dummy’ speaker that would play back music through Alexa.

The point here is that voice control is an entirely new prospect for Sonos users. And with Apple and Google already launching their own connected speakers, the Sonos One is likely to soon be followed by something else from the company.

The question is how good the software-based alternative will be for current speakers. Sonos’ pedigree for breathing new life into its legacy products has been a hallmark of its success, and this latest move should make things interesting.

Bringing a Sonos One into an existing Sonos setup at home is supposed to make the existing speakers a little smarter. For example, it would be possible to request a song on the One, and then push it to another Sonos speaker in a different room by voice. Or it could be pushed to all the other speakers at once.

In that respect, the Sonos One becomes the arbiter of the whole setup. So long as it’s within earshot, you can initiate a command there, and then speak up again to move it to where you want to listen.

It applies to every speaker Sonos has ever released, making it pretty widespread, as far as the overall footprint goes. That functionality is available as of today through the new app update the company rolled out.

The new-look Sonos app will also figure into managing multiple speakers, with a more dynamic layout that lessens the steps required to switch speakers or play different music in multiple rooms. That was released today, available to download now.

The biggest caveat to Sonos’ partnership with Amazon, at least in Canada, is the lack of official support in the country. Until or unless Alexa launches, it will require buying an Echo or Echo Dot across the border.

And yet, the Sonos One would invariably work the same in Canada anyway. Except for music services like Pandora, which aren’t operational in the country, all other supported ones would work just fine. Having used an Echo Dot with Spotify and TuneIn for some time, I don’t see how this new speaker would be any different. 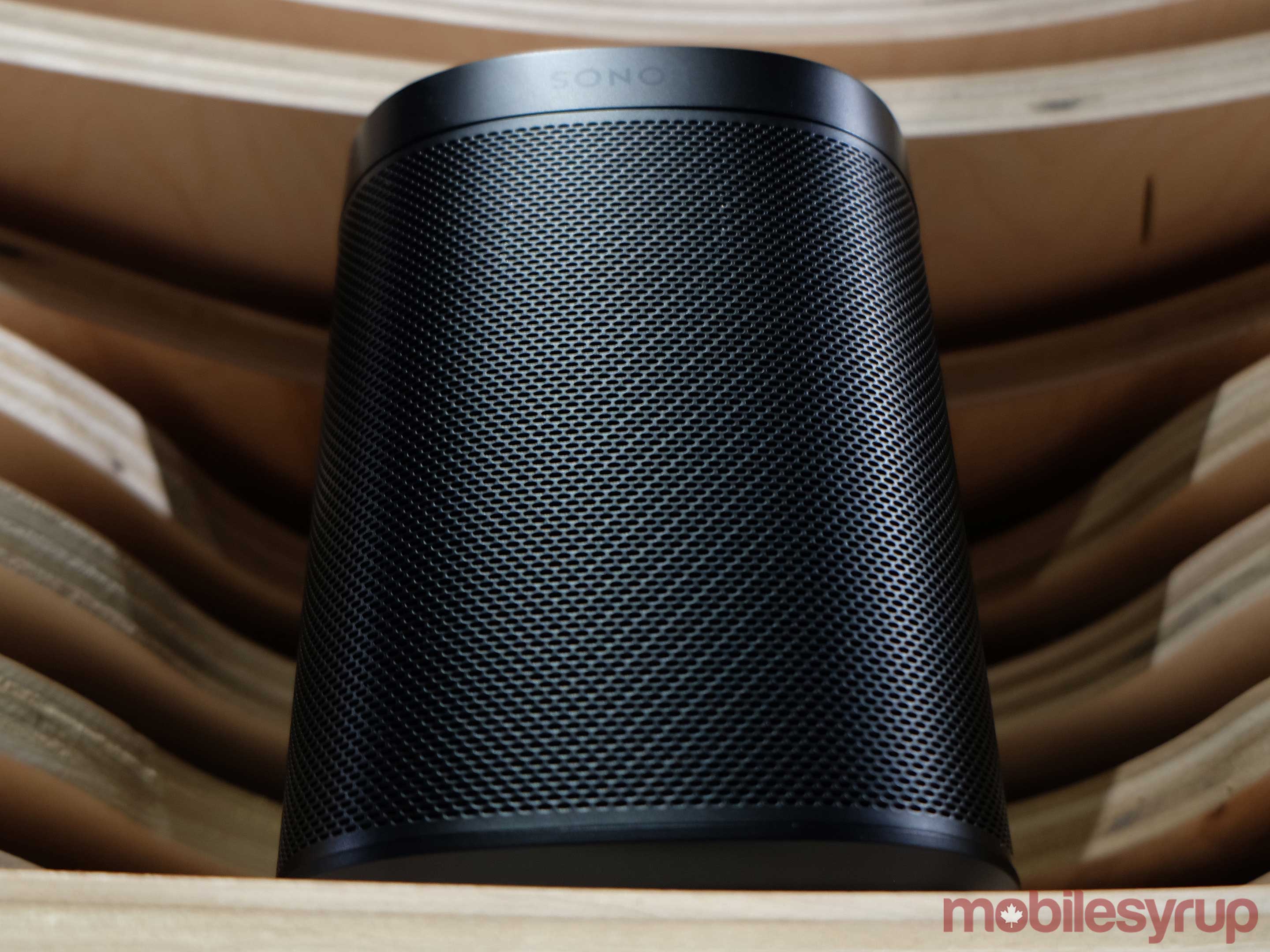 Sonos One users can have a default music service, so that commands don’t require a qualifier. For instance, I could say, ‘play Punch Drunk by Sade’ and it will go to whatever my default is. If I add a qualifier, like, ‘play music by Sade on iHeartRadio,’ then it would know what to do. Again, this is not any different from how Alexa already works.

That leads to the other caveat, which is the delayed Spotify integration. At launch, voice control through Spotify won’t work on the Sonos One, but company reps say it will be short-lived and should be ready to go weeks later.

Not surprisingly, Siri isn’t figuring into Sonos’ plans, though a workaround will help bridge the gap. With AirPlay 2 support coming next year, it will be possible to tell Siri to play something on an iOS device or Mac that would then just play on a Sonos speaker when the feature is engaged. It wasn’t clear which speakers would support the feature, but it will likely be a significant number, past and present.

Cortana wasn’t mentioned and doesn’t appear to be in the roadmap.

It isn’t a surprise that Sonos adopted voice assistants. It was expected to pivot that way even before it announced Alexa integration was coming earlier this year. By supporting both Alexa and Google Assistant, the company has a leg up on linear smart speakers, like the Apple HomePod and Google Home Max, which are limited in both voice control and music service compatibility.

It’s that combination of agnosticism and openness that makes the Sonos One an interesting speaker. It sounds good, and assuming it works as consistently with voice platforms, should be a formidable product.

Pricing has been confirmed at $249.99. Pre-orders are already underway, with retail availability starting on Oct. 24.