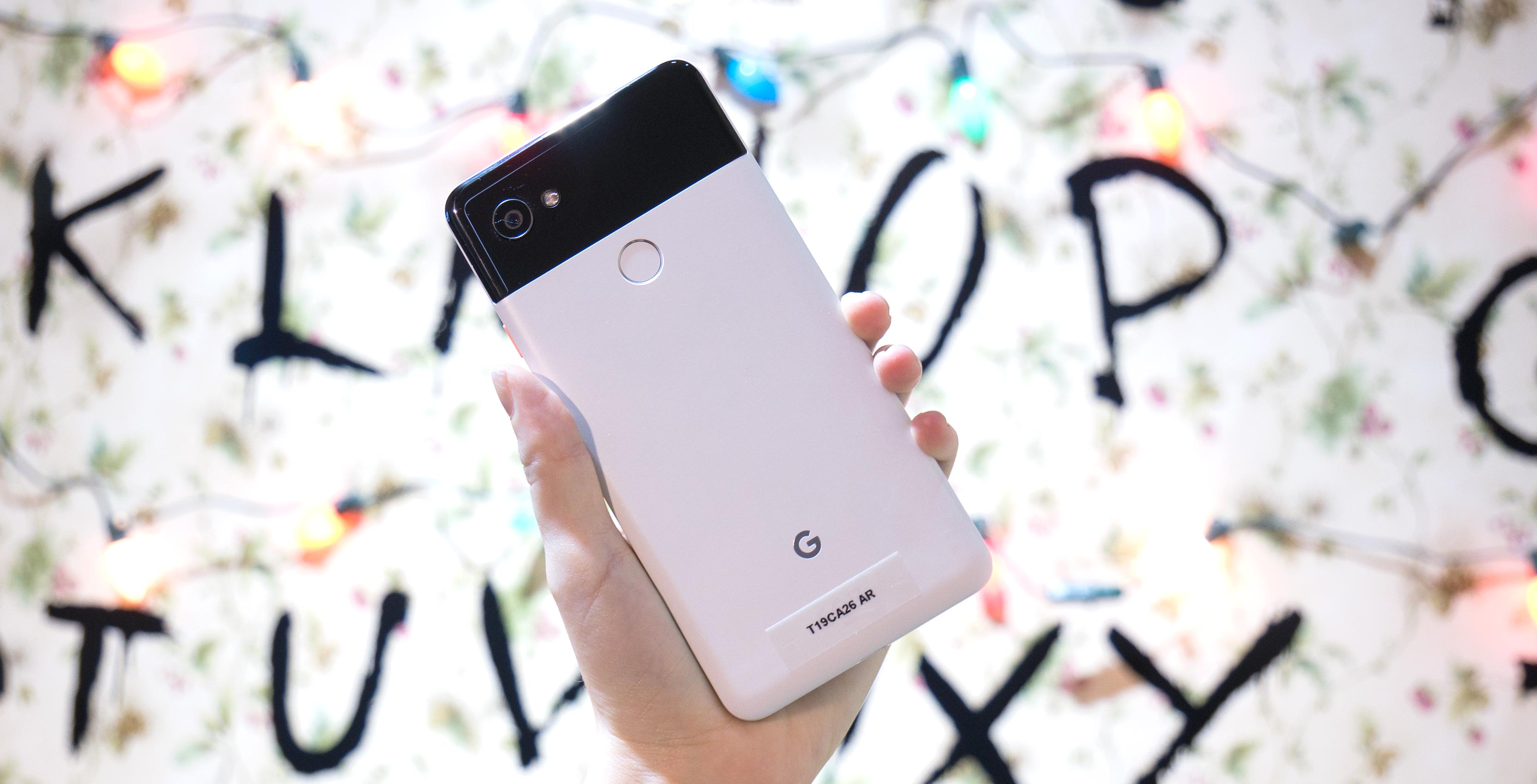 Google’s hotly awaited second-generation Pixel line has arrived, capping off a period of impressive reveals from some of the world’s largest mobile brands, namely Apple, Samsung and LG.

While Google’s Pixel devices may not yet compete with those major brands in terms of sales, the company’s ambition to gain a significant stake in the market is made clear with the Google Pixel 2 and Pixel 2 XL.

The Pixel 2 devices feel like the grown-up versions of last year’s models, though there was little to criticize even last year, apart from lack of water resistance and a few technical glitches.

The 2016 Pixels’ easy-to-use operating system and brilliant mobile shooter made the device stand out from the crowd. The Pixel 2 aims to build on that success, while adding finishing touches that make this a full-fledged competitor to the iPhone.

And at first glance, it seems to have ticked the right boxes. The phones are now IP67 water and dust resistant and feature a roster of top-of-the-line internals like the Qualcomm Snapdragon 835 chipset and a 6-inch P-OLED display.

However, while this may be the Pixel fans are waiting for, the latest crop of flagship devices to hit the market offer stiff competition. 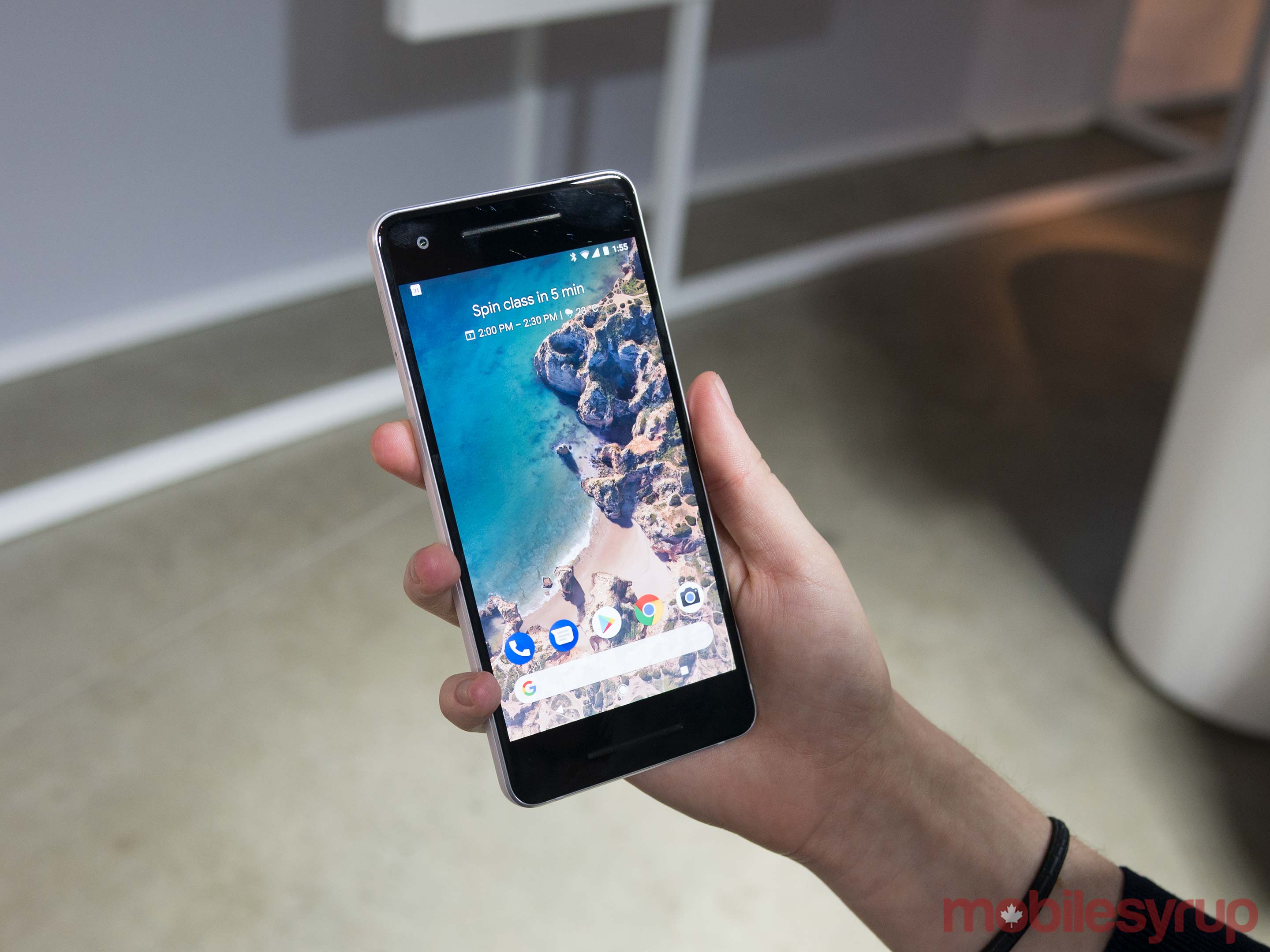 Particularly when it comes to the trend towards dual-camera devices, the Pixel 2 seems slightly out of step. In other ways — ditching the 3.5mm headphone jack — the smartphone is staying with the pack.

Can the Pixel 2’s single camera keep it at the top of the pile when it comes to mobile photography? Has Google managed to polish an already great package? Only time will tell.

But in my brief hands-on time with the device, I was charmed by the marriage of a stellar software experience paired with a significantly more mature hardware design.

A choice between displays 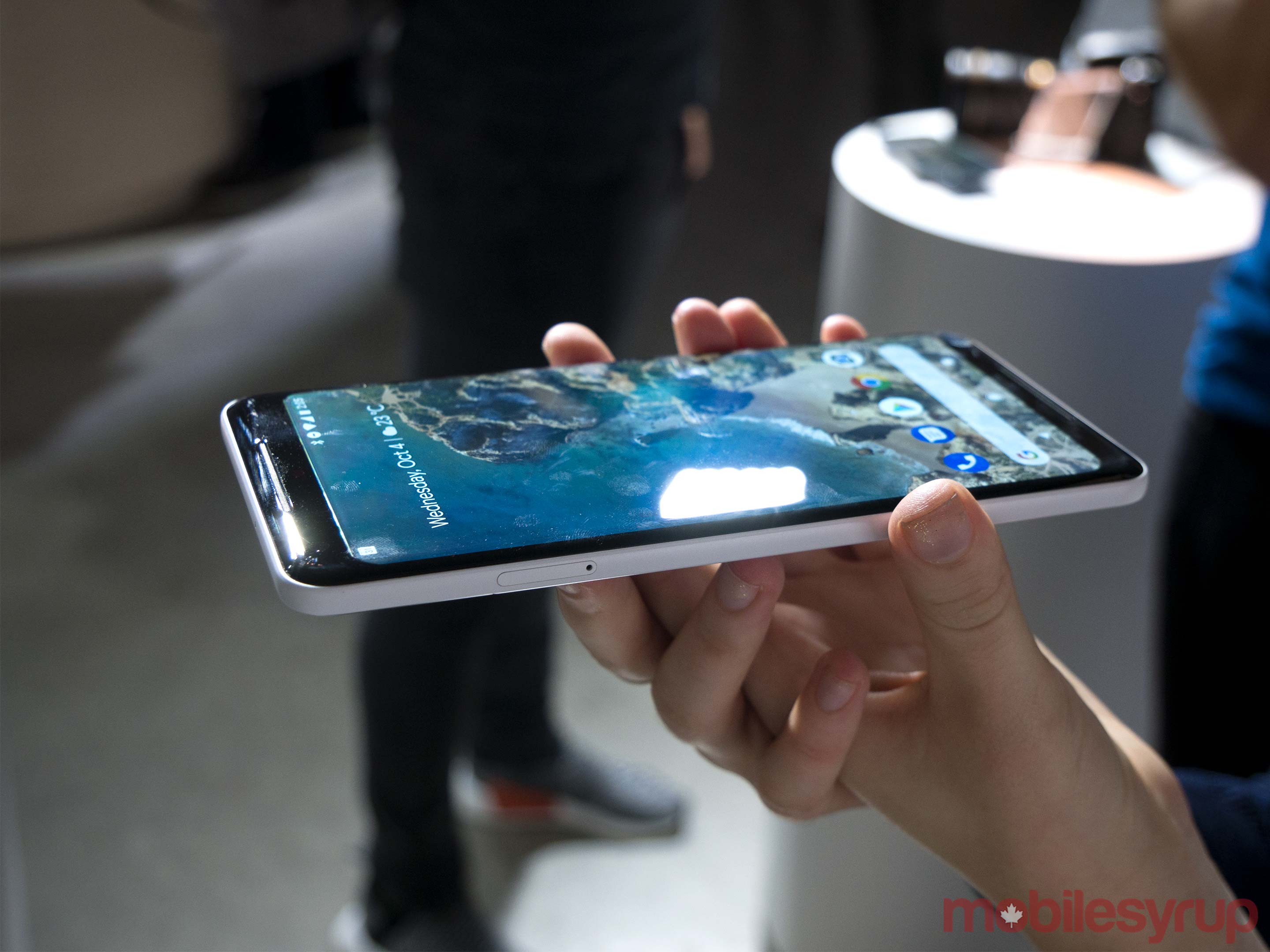 Although the Google Pixel 2 and 2 XL are disparate in size, they feature most of the same specs. The one major difference is display.

Meanwhile, the Pixel 2 has a 5-inch 1920 x 1080 pixels (441ppi) AMOLED display. While relatively unchanged from a specs perspective, the screen looked notably brighter than the Google Pixel I brought along to compare. Unfortunately, most mobile enthusiasts will likely focus on those big bezels that are so out of step with the rest of the industry. It is certainly a noteworthy difference. Then again, not many small-sized handsets have slimmed down their bezels yet, and Google accounts for their presence with stereo speakers (though these are present on the slimmer-bezeled 2 XL, as well). 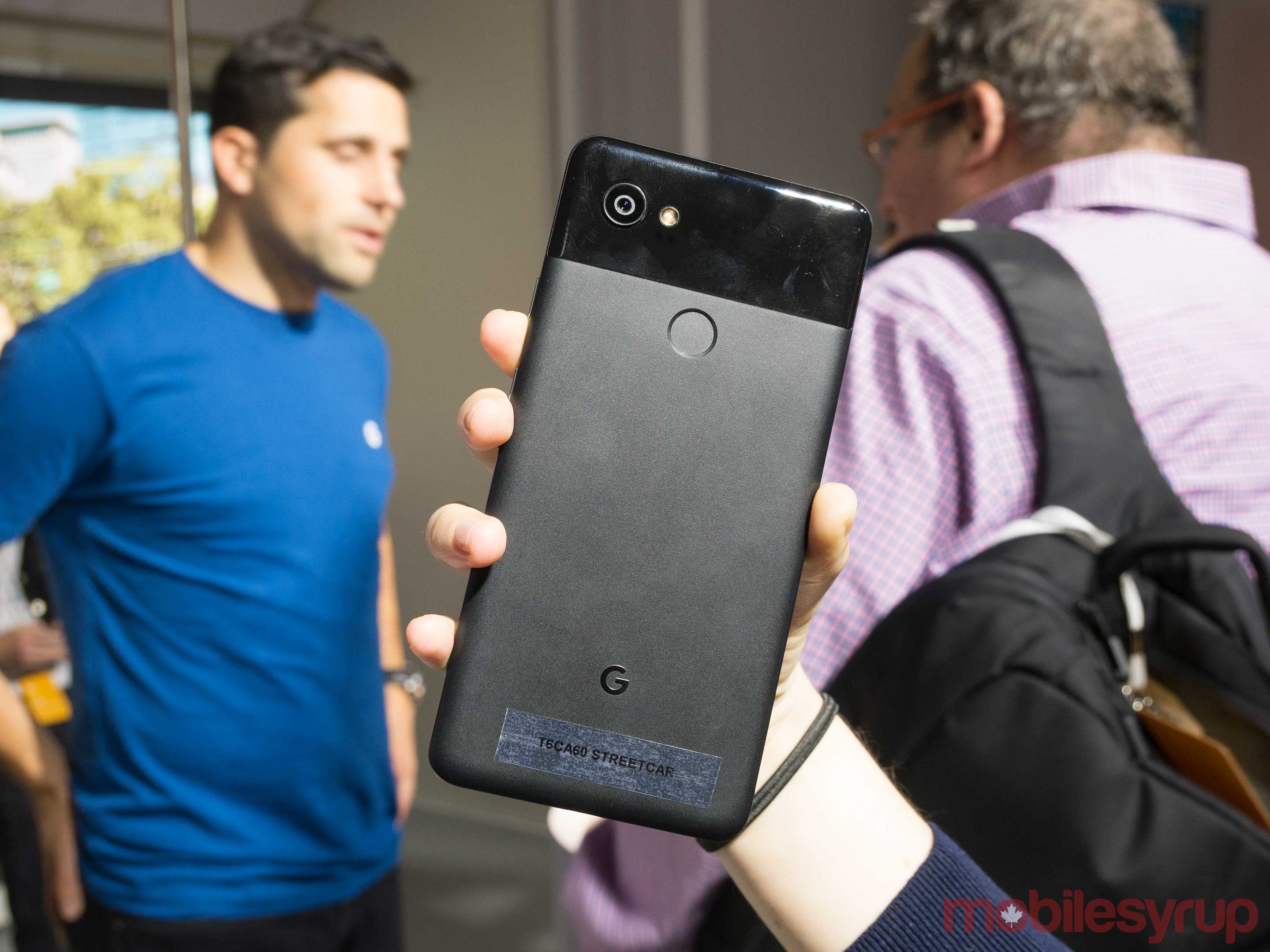 Despite the size difference, both smartphones have slimmed down substantially from the previous generation Pixels. The Pixel 2 is 7.8mm thick, while the Pixel 2 XL is 7.9mm thick.

Comparatively, the previous generation Pixels were 8.5mm. In terms of other recent flagships, though, it’s not the slimmest available; it’s thinner than the Samsung Galaxy Note 8 and S8+ by a small margin, but thicker than the iPhone 8 Plus, iPhone X and LG V30.

In terms of weight, the Pixel 2 comes in at 143 grams, while the Pixel 2 XL comes in at 175g. Though it felt well-balanced and comfortable in my hand, this spec is on the bulkier side as well. The V30, which has a screen the same size as the Pixel 2 XL, is only 158 grams. The iPhone X and Galaxy S8+ also come in at slightly lower weights, as did the original Pixel XL, which featured a 5.5-inch screen.

It wasn’t the heftiest among the recent releases though — the Galaxy Note 8 is 195 grams and the iPhone 8 Plus is 202g. 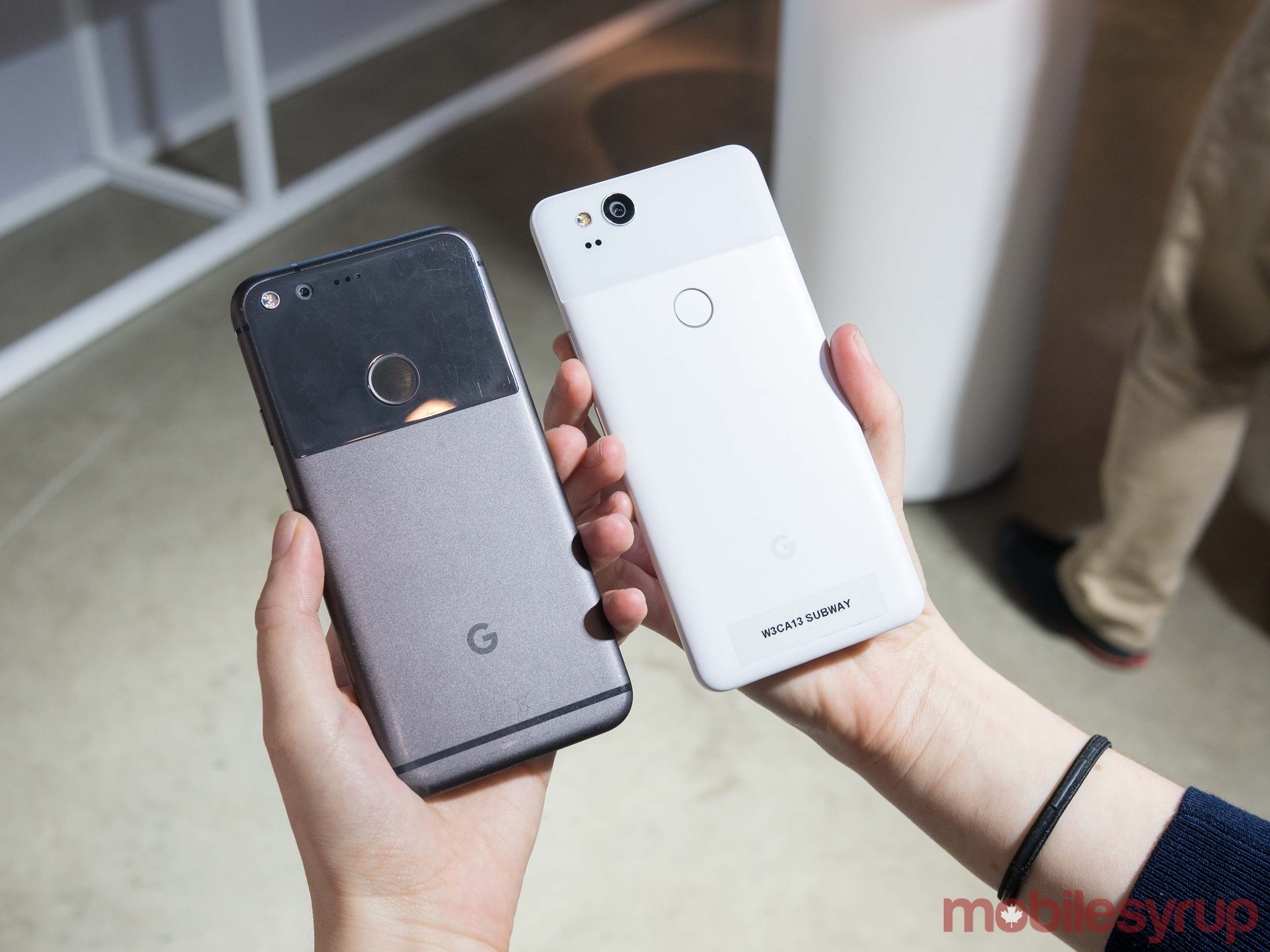 Aesthetically, the company has evolved from a somewhat unsophisticated — if distinctive — look to a sleek aesthetic that still maintains the core design elements it introduced last year. The glass pane at the top rear of the device now lies above the fingerprint sensor, the displays are larger and new colour options and combinations have been added.

The variant that best exemplifies the design change is the ‘Black and White’ Pixel 2 XL, the one that was referred to as a panda colour variation in various leaks. For that device, the glass visor is a shiny black, while the rest of the unibody is white aluminum and the power button offers a pop of bright orange colour.

It’s an intriguing look, but it may be polarizing since it lacks the usual elegance of a premium phone. The larger device is also available in ‘Just Black,’ which provides a more conventionally high-end look. As for the Pixel 2, it’s available in ‘Just Black,’ ‘Clearly White’ and ‘Kinda Blue,’ which, unlike last year’s ‘Very Blue,’ is a subtle colour that looks almost gray in some lights, featuring a brighter blue on its power button. This was hands-down my favourite colour, and will hopefully be more broadly available than the ‘Very Blue’ variant. 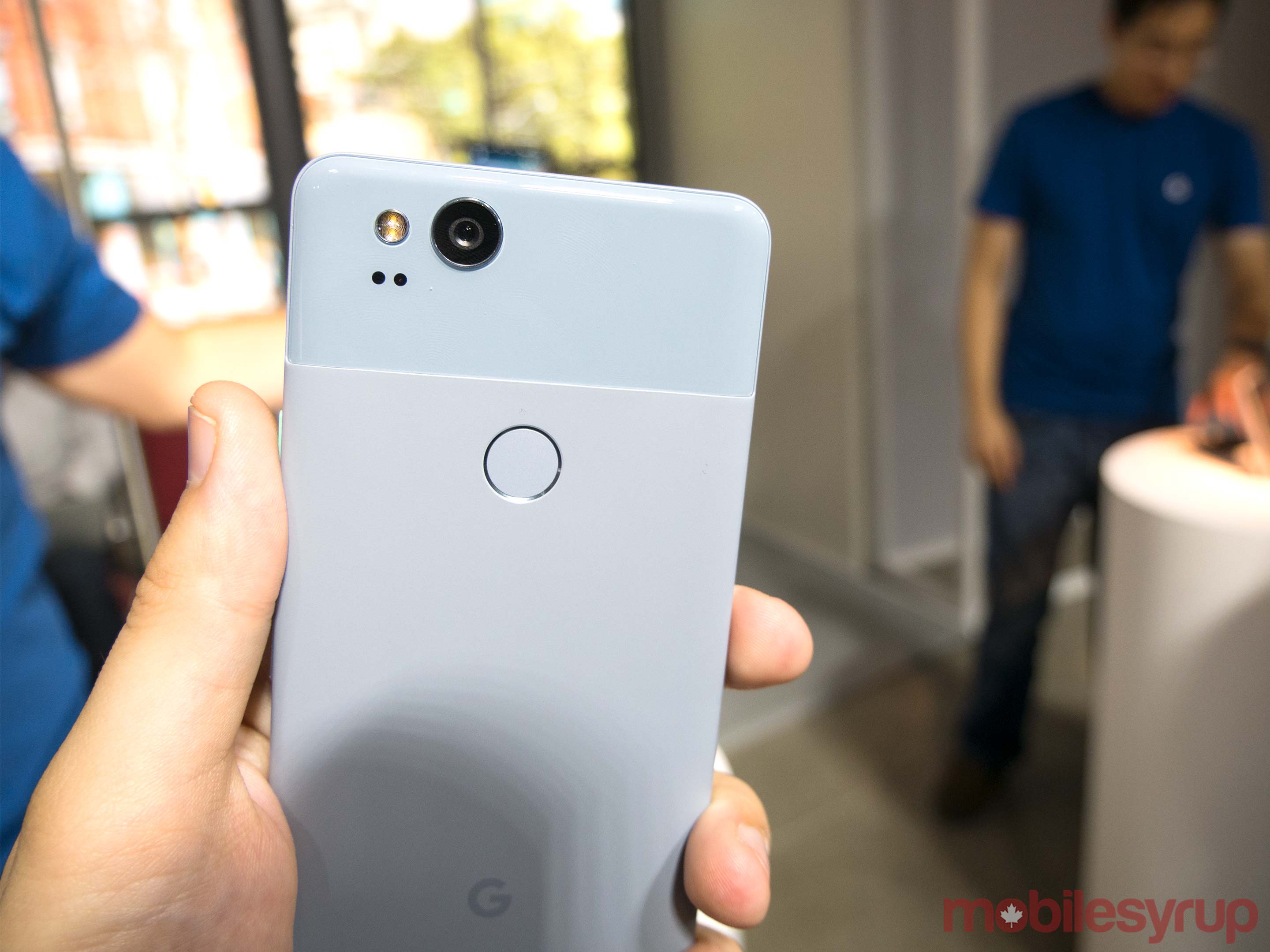 Another design element that may be polarizing is the lack of a 3.5mm headphone jack, even after teasing Apple for the decision last year. This means users will have to use Bluetooth headphones or live the ‘dongle life,’ both of which can add expense to the overall purchase. As many have pointed out in the past (including Google), it’s not an exceedingly user-friendly decision, though the company is offering a USB-C to 3.5mm adapter in the box, which offers some level of relief to fans who own expensive wired headphones.

Additionally, Google has implemented a squeezable frame, akin to the one on HTC’s U11, which pops up Google Assistant. The squeezing action worked perfectly on the smaller Pixel 2 but not as smoothly on the 2 XL, perhaps because my hands are small but also perhaps due to a better implementation.

In either case, I far preferred this quick action for pulling up the Google Assistant than saying “OK Google,” which I’m far too shy to do in public. Considering how easy and fun it is to give the phone a quick squeeze, the Assistant might even get more use this way. 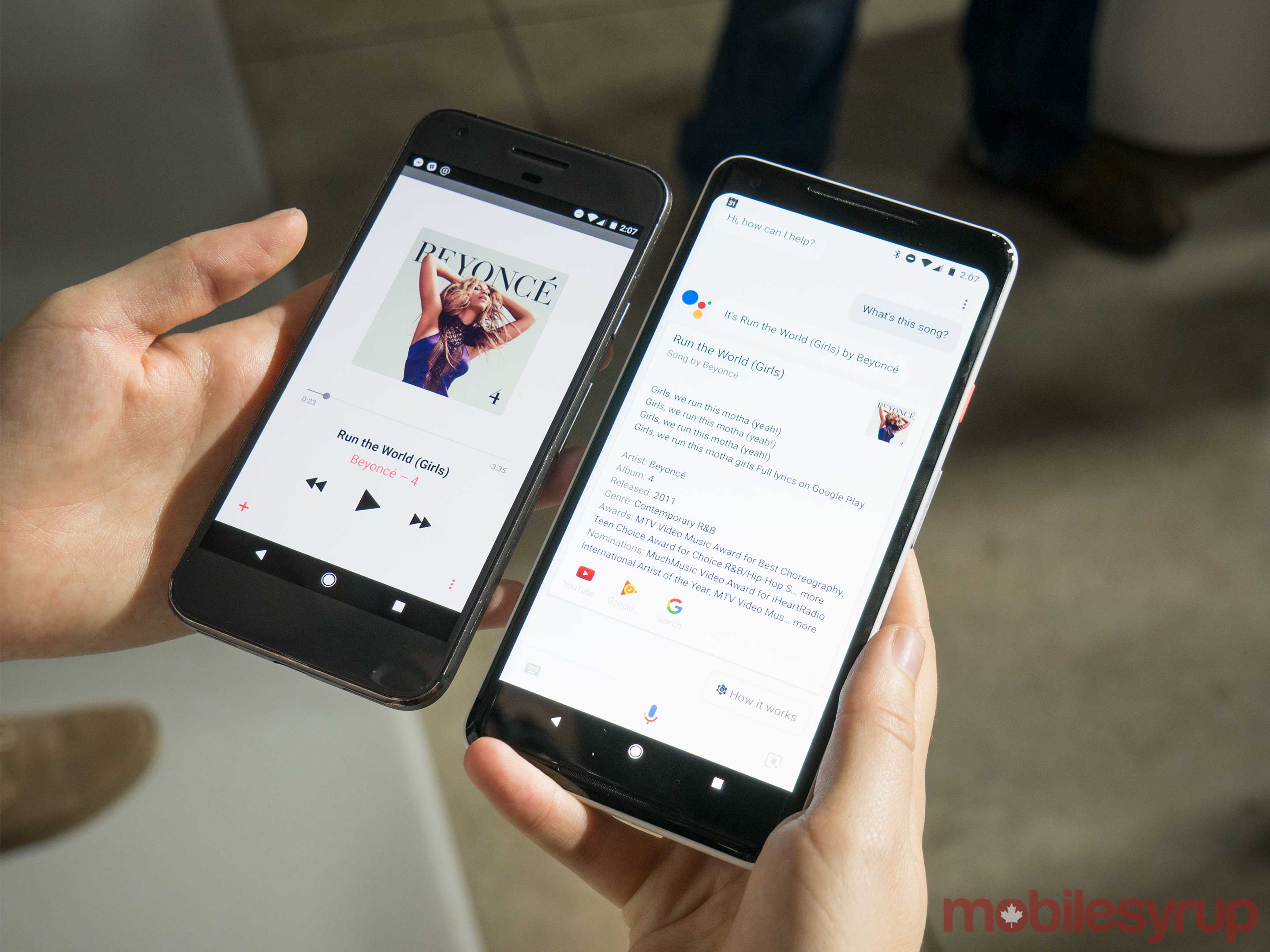 As for user experience, the device runs Android 8.0 Oreo out of the box (though won’t be the first to do so in Canada thanks to the tricky Sony Xperia XZ1). Like the original Pixel, I was immediately impressed by the ease and fluidity that Pixel’s form of stock Android provides. At the bottom is an all-purpose Google search bar for local and internet searches. Above is a launcher with a roster of apps that can be swiped up to reveal the full app drawer.

None of that is new, but it’s implemented with such perfection on the Pixels that it somehow looks and feels completely unique. The operating system also looks beautifully at home on a large screen like the Pixel 2 XL’s, where its minimal elegance can truly shine.

On top of the basics, Google has also layered on a few new features. For instance, there’s a new feature called ‘Now Playing’ that is always listening to identify music. When a song plays your phone, resting with its always-on display active, will analyze the music and, if it recognizes it from a database of tens of thousands of songs, it will show what song is playing. For more information, you can tap the subtle notification and your phone will open to a Google Assistant result. 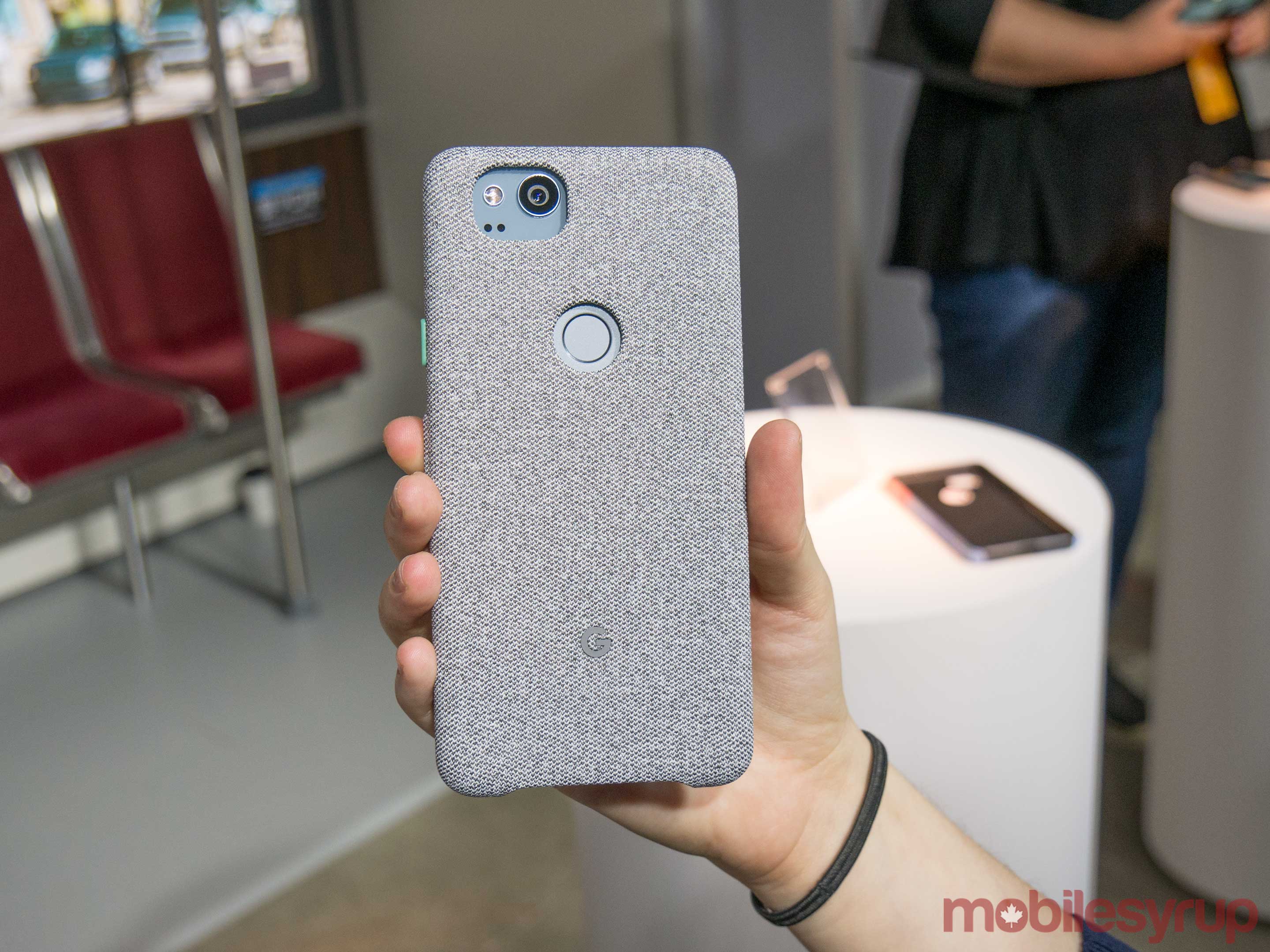 It worked well when I tried it, guessing Weezer and Beyonce songs in under 20 seconds, but it wasn’t able to guess a more niche U.K. artist, Theophilus London.

The interesting thing about the ‘Now Playing’ feature is that Google says the computing happens locally, with no data sent to the cloud.

Additionally, the Pixel 2 will be the first phone to fully support Google Lens, a handy AI-powered feature that analyzes a user’s picture to tell them more about it or provide useful links. This feature worked exceedingly well in testing.

I snapped a picture of a poster with a website on it, for instance, and after pulling up the picture in the ‘Photos’ app, I just pressed the small ‘Lens’ icon and Google Assistant provided me with the correct link to head to in my browser. It’s also possible to use the feature from within Google Assistant.

It’s not fully-fledged yet, though. For now, it only works on certain categories like books, business cards and landmarks. So far, however, I’m impressed; it’s real world AI that works well. 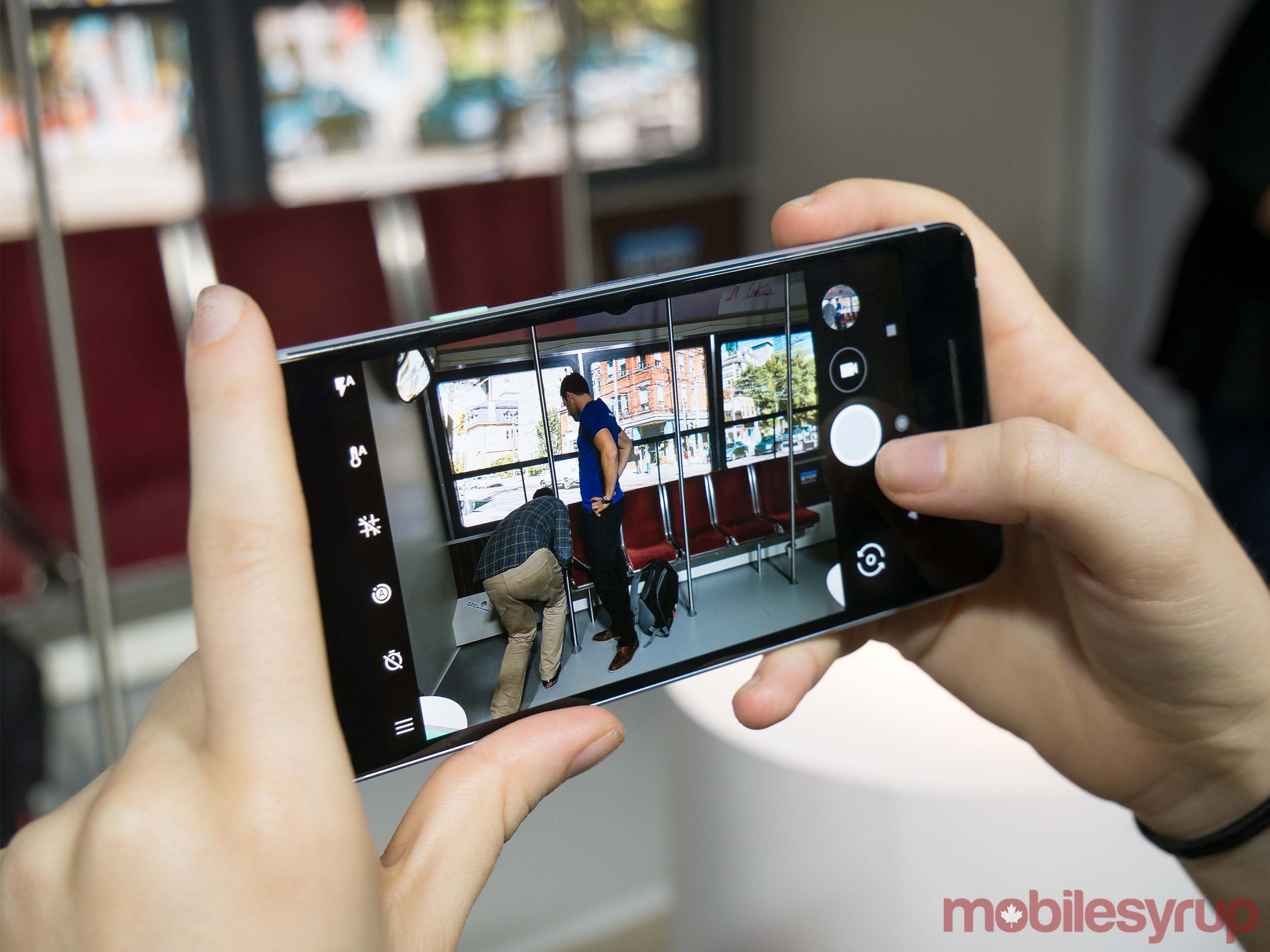 Apart from software, one of the Pixel line’s major selling points is its camera experience. This year, the company announced that it was given a 98 rating by DxOMark, the highest to date. That doesn’t mean much to everyone, however, so I’ll try to stick to specs and my brief experience with the device. As I mentioned above, Google went in a different direction with its Pixel 2 camera setups than most of its competitors.

Both feature a 12.2-megapixel shooter featuring autofocus with laser and dual pixel phase detection and a f/1.8 aperture. Additionally, the phone now features optical in addition to electronic image stabilization — a feature that should allow for significantly more clarity. The rear camera is also capable of shooting video in 4K at 30fps.

As for the front camera, it comes in at 8-megapixels with a f/2.4 aperture and fixed focus.

By the specs, the camera certainly doesn’t sound too impressive, but much like its predecessor I found the camera exceedingly fast and noted the vibrancy of the colours in the snaps I took, even in the somewhat poorly lit event space where we were situated. 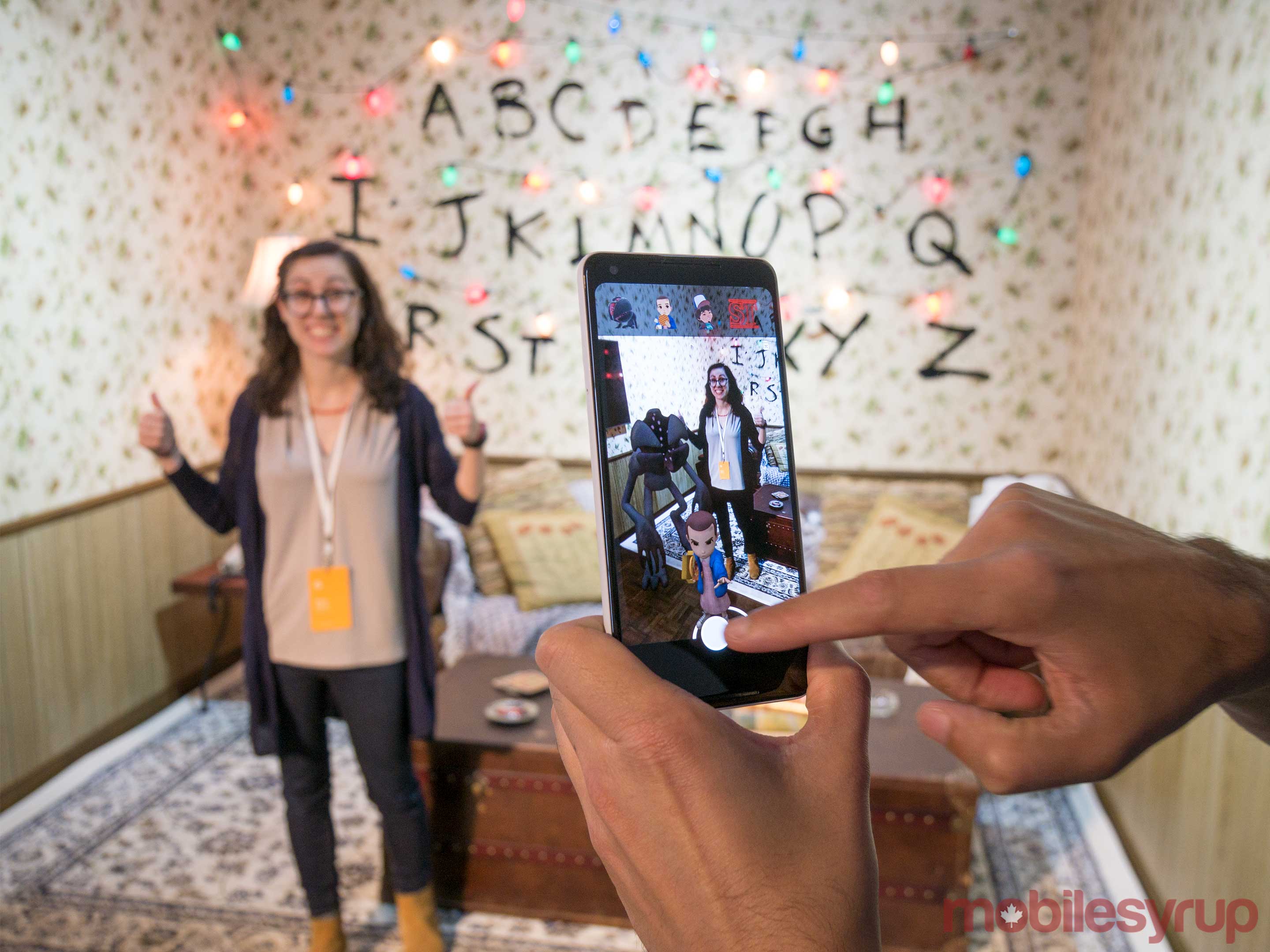 Ultimately, it seems like a fairly iterative update which consists mostly of tweaks — wider aperture, OIS, more advanced phase detection, smaller pixels — but if those tweaks come together to substantially improve what was already a stellar camera experience from the previous generation, I can certainly see the device leading the industry in this respect.

Coming along with the camera is a new ‘Portrait Mode’ bokeh effect, which works subtly but well on both front and back cameras. This is somewhat impressive, considering most phones do this by creating a depth map using two camera sensors that take pictures spaced about half an inch apart. The Pixel 2 manages this by using its dual-pixel camera sensor, which makes a depth map from images that are spaced less than a micron apart.

Other camera features include ‘Motion Photos,’ which much like Apple’s Live Photos, is a setting that automatically captures video around each snap, and ‘Augmented Reality Stickers,’ which Google demoed with a set of Stranger Things inspired AR creations. With this feature, based on Google’s ARCore framework, you can drag the stickers — for example a demogorgon — onto the screen and create a scene to interact with in real time. This experience isn’t ready yet, but Google says it’s coming to both 2016 and 2017 Pixels in the near future.

Powering all of these new software experiences is Qualcomm’s latest chipset, the octa-core Qualcomm Snapdragon 835, with 4GB of RAM and 64GB or 128GB of internal storage — all premium specs that put it in contention with devices like the Galaxy Note 8, LG V30 and Apple iPhone 8 Plus or iPhone X.

During my time with it, I found it perfectly snappy and responsive, even when dealing with heavy processing apps — though more testing is certainly needed.

As for the power source, it’s a 2,700mAh battery on the Pixel 2 and a 3,520mAh on the larger Pixel 2 XL, which is larger than most devices of that size. From spot-on specs to intriguing software, this year’s Pixel looks promising. If it’s able to fulfill the promise of a perfectly paired software and hardware package, it has a shot at making waves in the mobile market.