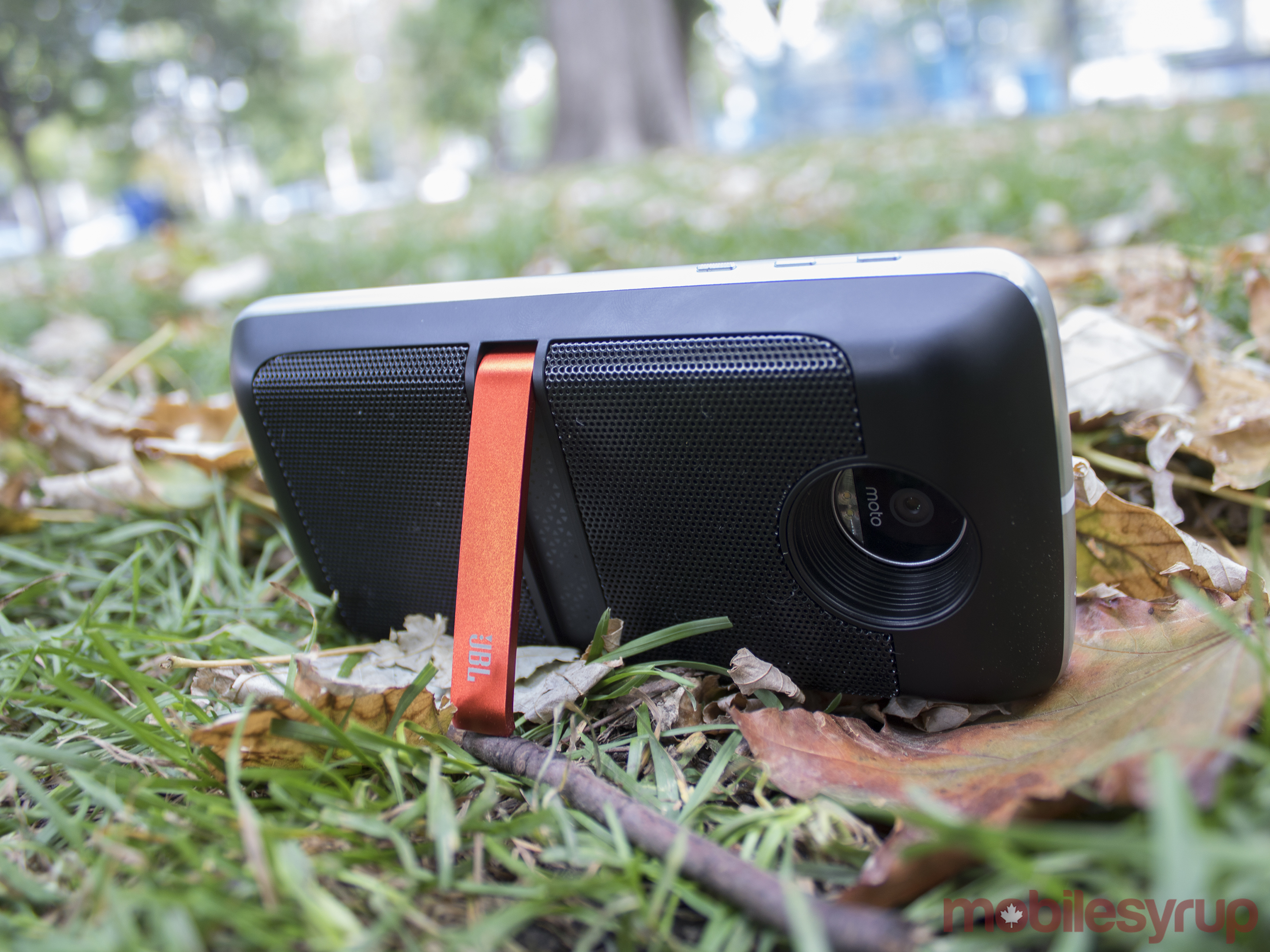 Apart from the ill-fated LG G5, Lenovo’s Motorola is now the only company to come to market with a fairly well-realized version of this concept and in many ways, it delivers on the modular premise — albeit with Mods that add more ‘fun’ than ‘functionality.’

However, the implementation of this idea is still in its infancy — especially considering the somewhat unrealistic prices Moto is currently charging for its Mods — so to make a case for itself, the Moto Z Play must stand by itself as a quality device. Does it offer something, apart from the Mods, that other devices do not?

Furthermore, does it offer something that its higher-end sibling, the Moto Z, does not — and could it potentially be the better buy?

I spent a scant week with Moto Z Play in an attempt to find the answers. 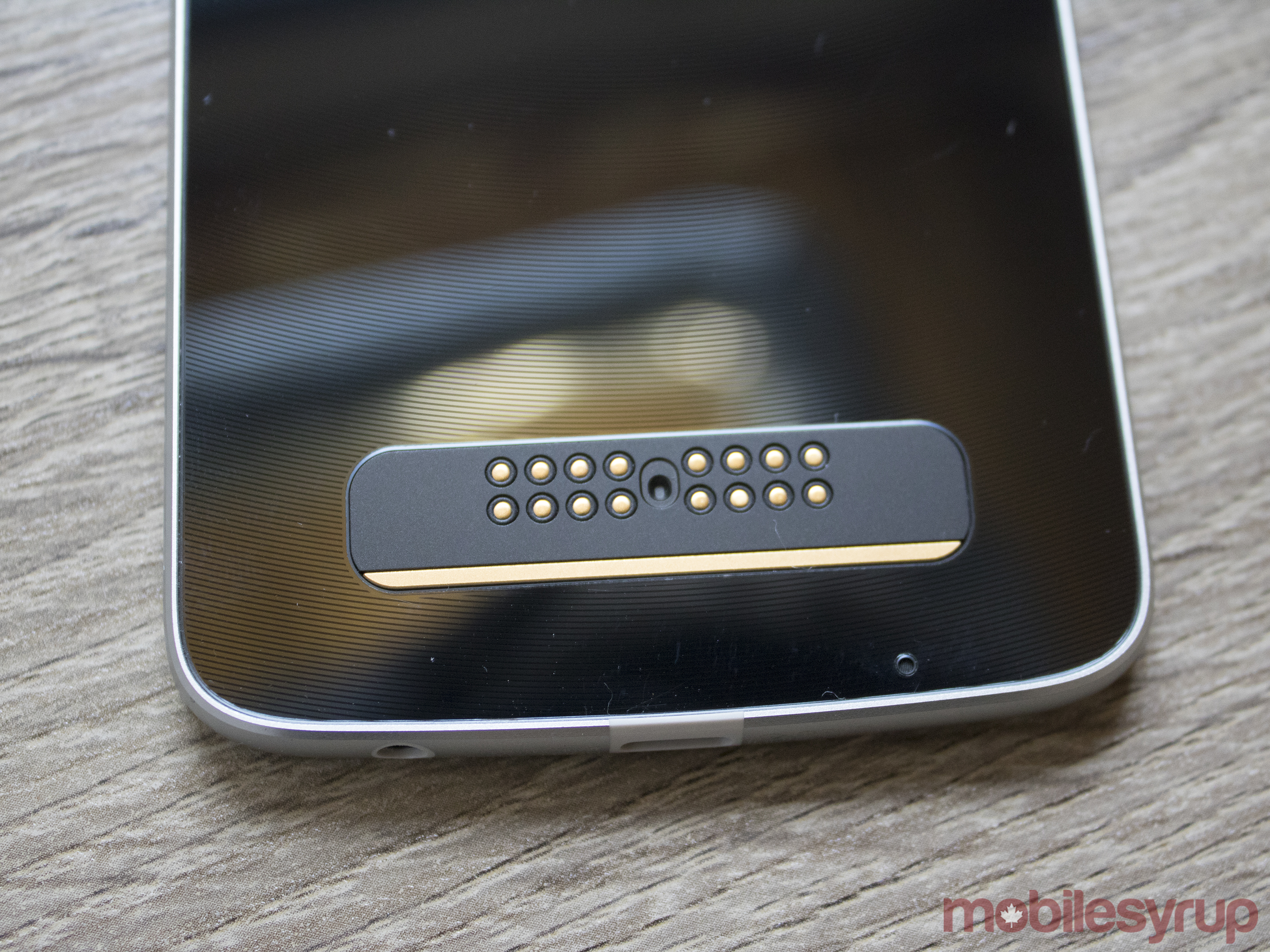 The Moto Z Play comes in at 156.4mm x 76.4mm x 6.99mm, which is significantly longer than similar mid-range competitors like the Moto G4 Plus, OnePlus 3, Asus Zenfone 3 and ZTE Axon 7, and wider than most as well. Its size is made up for in its thinness, however, coming in slimmer than the above-mentioned group by an often considerable margin.

While it doesn’t necessarily feel hefty in the hand, the Play is among the heaviest of its competitors at 165g, though still weighs far less than the chunky 175 gram ZTE Axon 7.

Visually, the device is stunning, managing to achieve a look that is arguably more premium than the Moto Z. The device’s back has a gleaming sheen with a minimal Moto logo and simple circular camera bump from which emanates an expanding circular pattern. Brushed metal runs around the edges, with volume and power buttons tucked up at a sensible high level on the right-hand side.

The only minor detractors to the Play’s design are a slightly chunky bezel, the unusual look of its square fingerprint reader (though I appreciate that it’s front-facing) and the unfinished look of the magnet bumps where mods are attached, at the bottom of its rear side.

At the base of the phone is a USB-C port, just like its sibling the Moto Z. Don’t worry, though, it hasn’t abandoned the traditional 3.5mm headphone jack. This is one of the main differentiators between the two devices, allowing the Moto Z it’s wafer-thin size, but at the cost of not having a headphone jack.

In my opinion, slimness isn’t worth the hassle of having to find and utilize wireless headphones or succumb to the dongle life. The fact that the Moto Z Play has a headphone jack is a consumer-friendly feature that I appreciate, and besides — thinness is only one of the metrics when it comes to the bulk of a phone and not, to my mind, the most important one.

Thinness is essential for the Moto Mods, however, which are all quite chunky. I won’t go too far into depth on them, as it’s likely many won’t opt to shell out for the pricey additions, but I will say they are exceedingly fun and well-engineered.

My favourites were the Hasselblad True Zoom Moto Mod, which gives the phone the look of a camera in addition to impressive zooming capabilities, and the speaker, which would effectively erase the need for a separate Bluetooth unit. 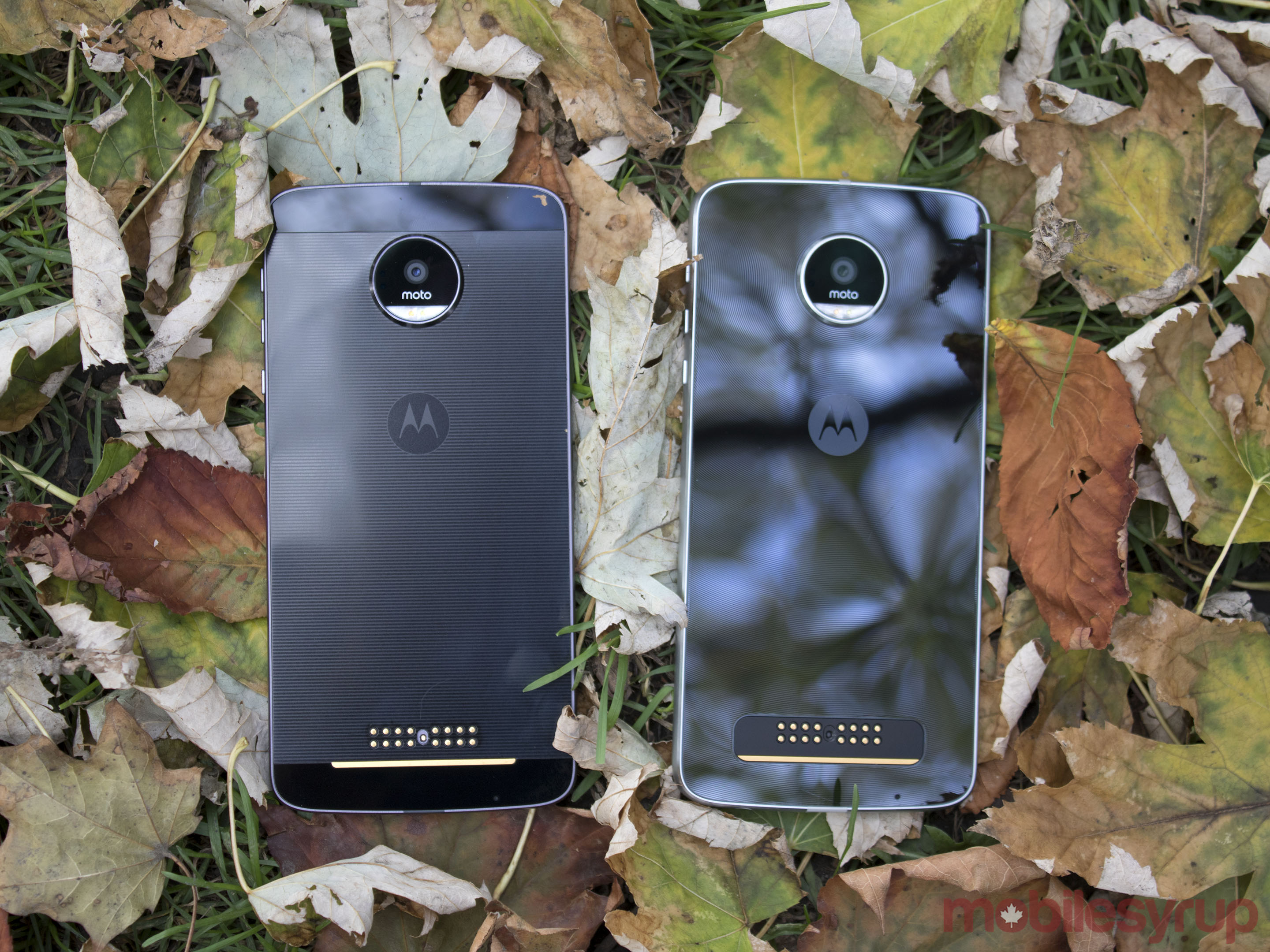 The Moto Z Play runs on a 14nm Qualcomm Snapdragon 625 processor, backed up by 3GB of RAM and paired with an Adreno 506 GPU.

Initially, I was a little surprised at the 625 chip, considering some lower-priced competitors available in the Canadian market — in particular the ZTE Axon 7 and OnePlus 3 — run Snapdragon 820 SoCs.

However, it’s important to remember that the processor is octa-core, with each clocking in at 2GHz. In practice, it’s zippy and smooth most of the time. Don’t get me wrong, it’s not high performance by any means. For example, an app like Snapchat can easily crash after ten minutes of using the augmented reality face filters. However, in my day to day usage I experienced very few issues, and none of its core apps or Google Maps ever closed out unexpectedly. The device also seemed to manage its RAM well, as I rarely encountered an instance of notable slowdown.

In terms of internal storage, it comes at a reasonable base level of 32GB, which is expandable by microSD up to 2TB.

A lifespan of nearly two days 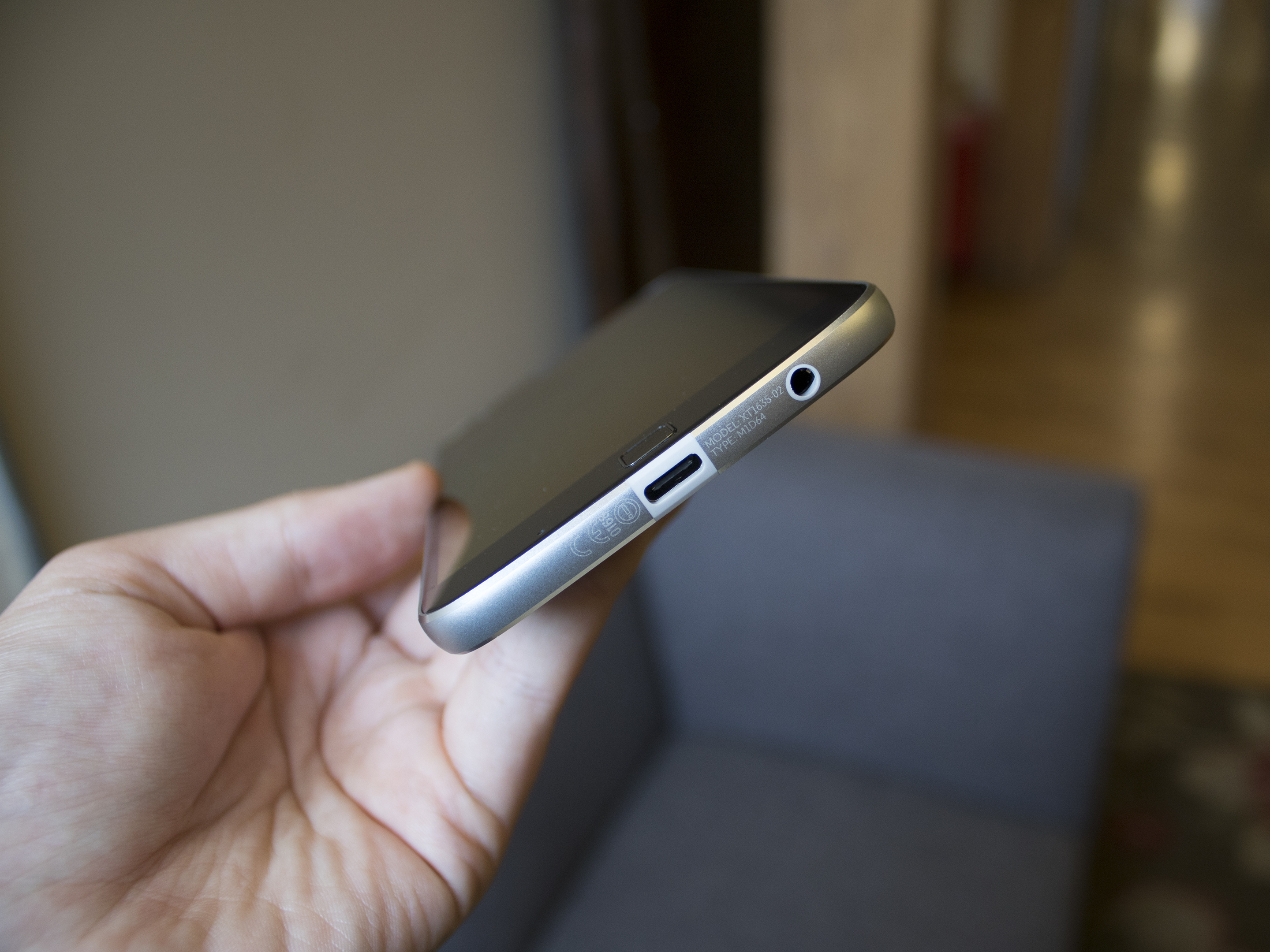 This phone comes equipped with a 3,510mAh battery that is sure to delight any consumer that’s been using a high-end flagship device that sacrifices battery life for performance (also known as all of them).

The company promises up to 50 hours of mixed usage, and while it didn’t quite achieve that with me, it did perform admirably. It should be noted that I’m a fairly heavy mobile user, all things considered. On an average day, I stream music, browse the internet, play processing-heavy games and use Google Maps on predominantly mobile data for between three and six hours.

Considering how I use, I was impressed by the fact that I was able to get almost two day’s use out of the Moto Z Play, with it dying around 6 p.m. on the second day.

The only device I’ve used that has outlasted the Moto Z Play is the LG X Power, though the handset’s other issues made it all but unusable. In the case of the Moto Z Play, it’s an excellent device that just so happens to also have a stand-out battery.

There just isn’t a comparison to be made between the Moto Z Play’s battery and other mid-range devices — even the flagships. The G4 Plus, OnePlus 3 and Asus Zenfone 3 all rest at 3,000mAh which translates, in my experience, to a day’s use. The ZTE Axon 7 is the most competitive with a 3,250mAh battery, but the demands on that battery are also higher due to its Snapdragon 820 processor, leaving me with an awkward day and a half’s use.

The phone has also kept relatively cool the whole time I’ve used it, even when charging, with a peak heat of around 43 degrees Celsius. 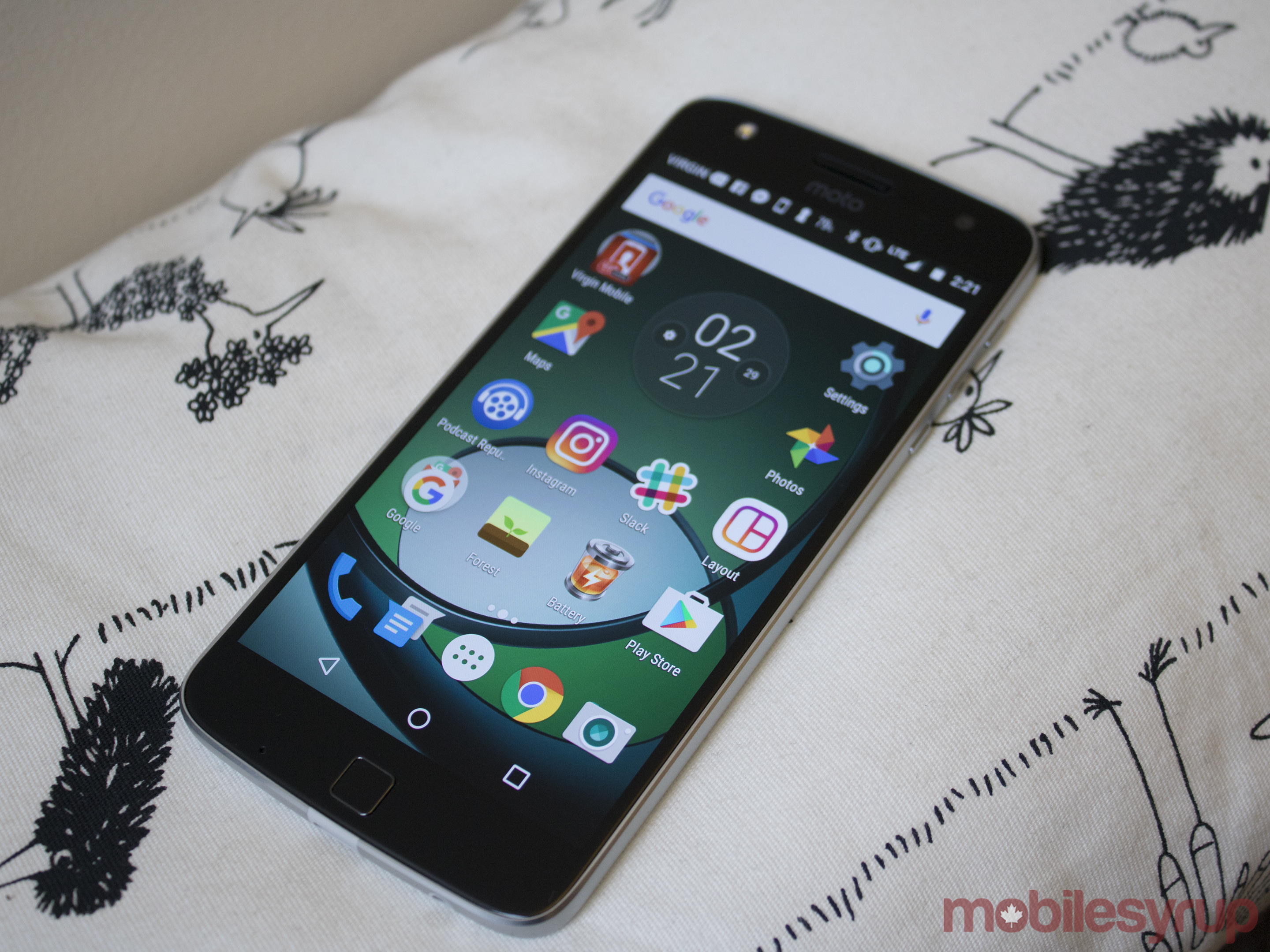 The Moto Z Play also features a stunning 5.5-inch Super AMOLED 1080 x 1920 pixel display with 403 ppi density. Like all Super AMOLED screens, it’s noteworthy for its vibrancy, with friends and family who inspected the phone specifically commenting on its crisp, rich colours.

In case super warm colours aren’t your thing, however, you can also choose to have the phone display realistic colour in the settings. My only issue with the display is that I found it somewhat difficult to view the screen in sunlight on occasion, but in general, it held up fairly well. 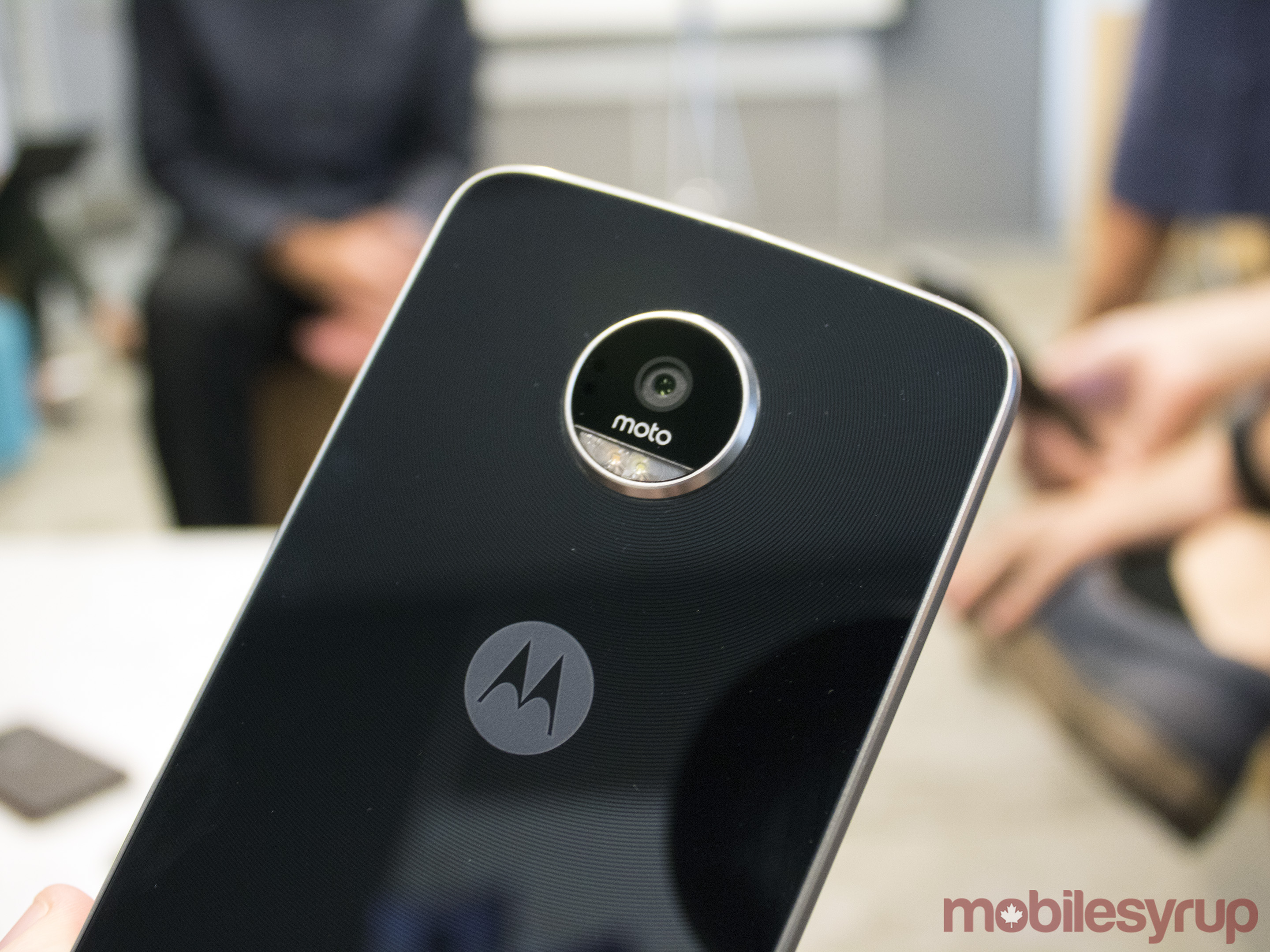 On the rear of the phone sits its 16-megapixel camera, fairly standard amongst its competitors, save for the 20-megapixel ZTE Axon 7. It also has a f/2.0 aperture, which is, again, relatively standard only to be outdone by the Axon 7’s f/1.8 aperture.

Performance-wise, I found the Moto Z Play to be an adequate shooter capable of taking surprisingly clear and discernible low-light pictures. In daylight, the photos I shot featured nice saturation, but the subjects of my pictures would easily come out blurred when taking action photos. The 4x digital zoom also wasn’t exceptionally capable but looked presentable when cranked up half way.

As for speed, launching the camera from locked took a millisecond or so longer than I would have preferred. Launching the camera from locked also isn’t an option present on the always-on display. Instead, you can press the power button or twist the phone using a Moto Action. This a slightly awkward setup that resulted in me missing out on a perhaps career-defining picture of a dog wearing a shirt. Once the camera app has launched, however, photos can be captured without any noticeable lag.

The modes on the camera include panorama, slow motion and professional — which has a simplistic design that is exceptionally easy to use.

The front-facing camera is 5 megapixels with a f/2.2 aperture and a wide-angle 85-degree lens for better glamour shots with friends. It’s capable in this capacity and, like the rear-facing camera, surprisingly good at performing in low light.

Close to stock, but how close to Nougat? 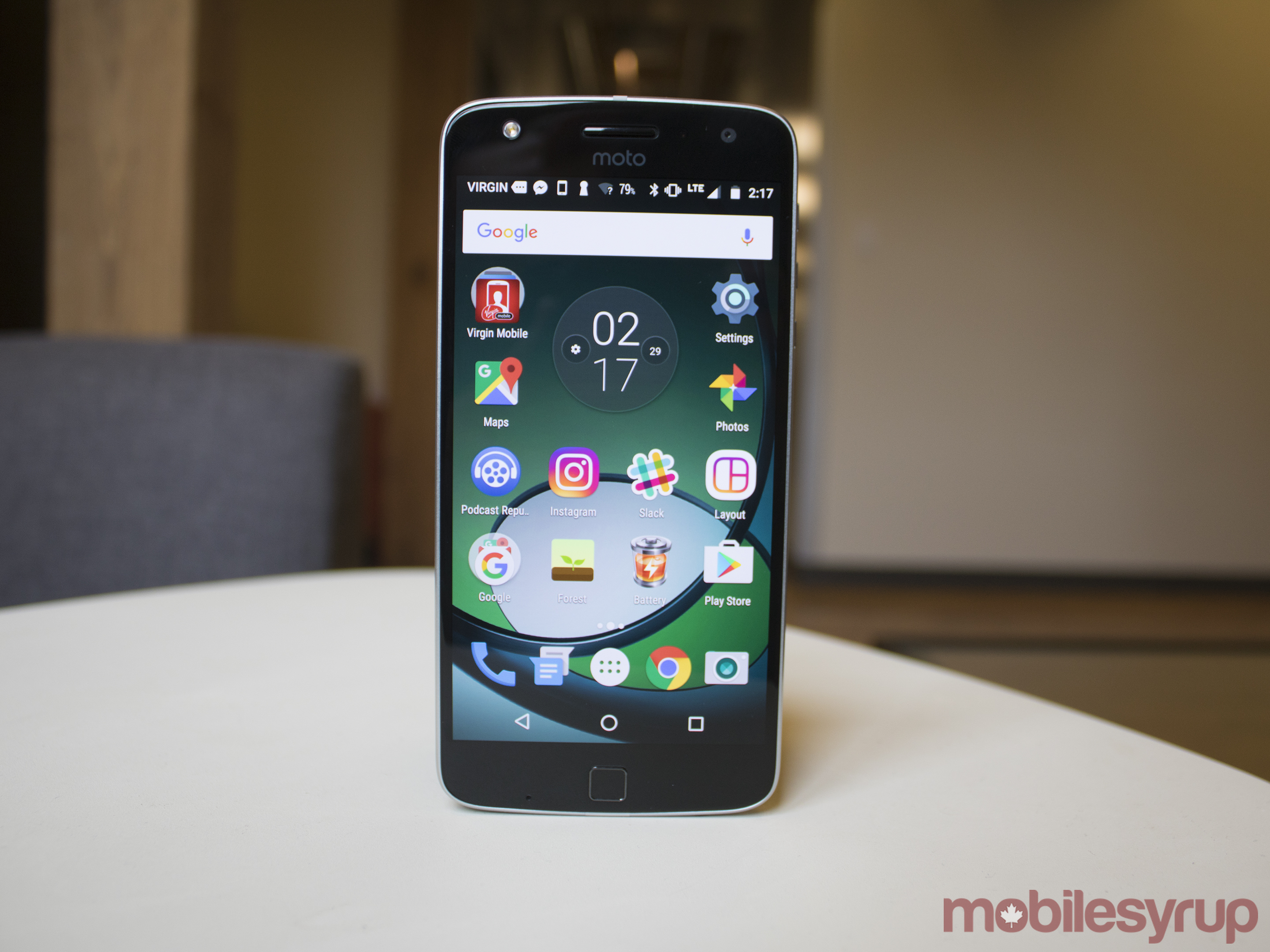 One widely-discussed issue with Moto phones, in general, is their tardiness in receiving Android updates. The Moto Z Play launches with Android 6.0.1 Marshmallow, and many Moto fans are concerned they’ll be waiting a while before they see Android 7.0 Nougat — though it should be noted Android Authority was optimistic regarding the time frame.

One thing we know for certain, however, is Motorola’s position on Android security updates. The company itself has stated that customers better forget about monthly security patches, which will deter the more safety conscious Android enthusiasts.

That aside, I really enjoy Moto’s take on an Android skin. It feels exceedingly close to stock right out of the box, with an app drawer and Google Now positioned to the right of home.

The only things that vex me about the skin is its aggressive haptic feedback, which can be removed from your Android keyboard of choice, but remains for things like home button and app presses, and the motion activated feature that turns on the flashlight when you ‘chop’ the phone. Too often this feature is accidentally activated when running, resulting in me temporarily blinding some strangers. Thankfully, this feature can be turned off within the Moto app.

Not the best, not the worst 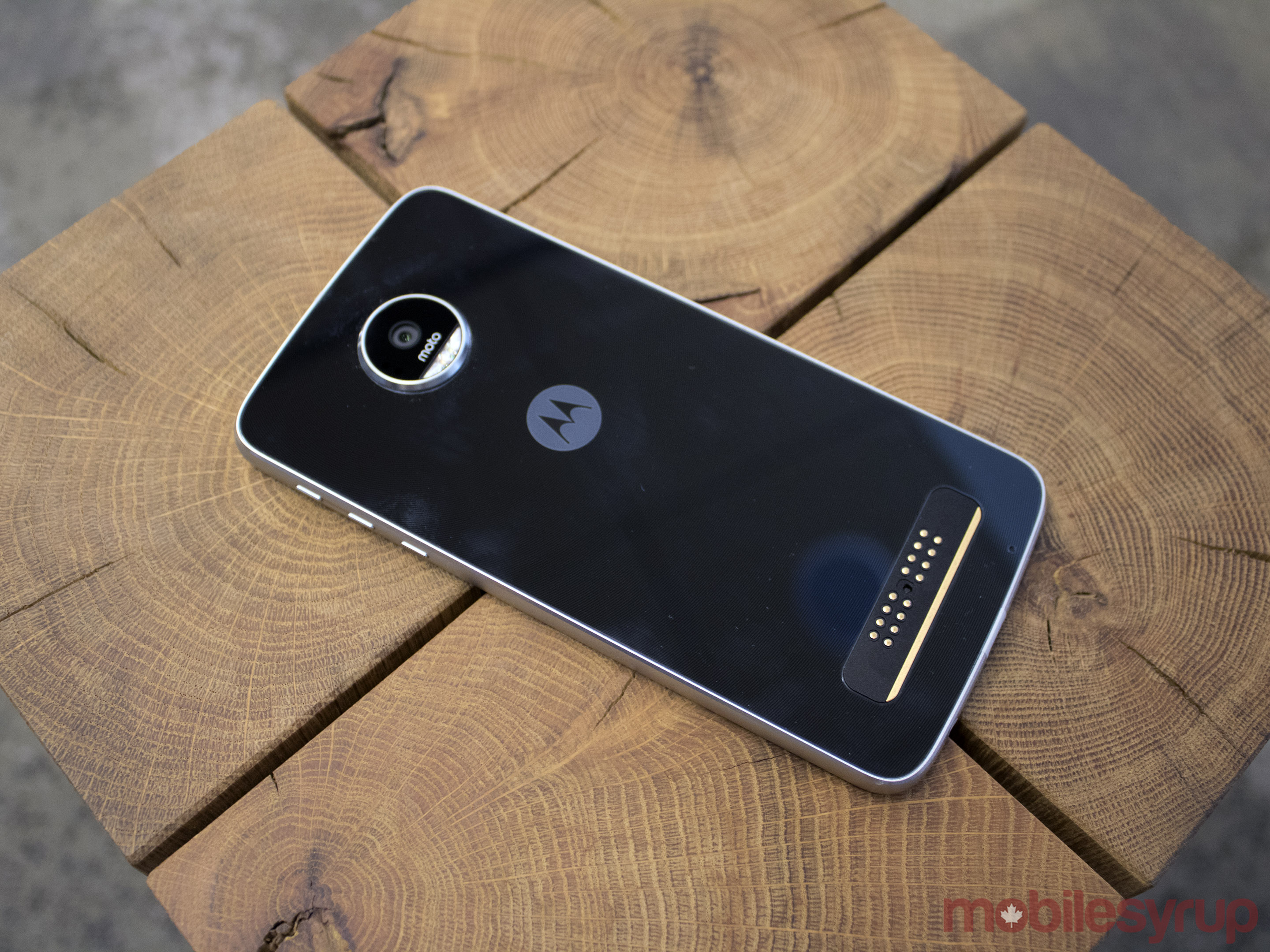 I wasn’t expecting anything special from the audio, but music sounded impressively clear and deep through my wired headphones and was nicely articulated when playing through the front-ported loudspeaker as well, without too much of a tinny quality. In fact, I would rank it highly amongst its fellow mid-range and budget phones when it comes to overall sound quality.

I will note, however, that I couldn’t hear very well when taking calls without headphones, but even in this case, the experience was better than what I’ve experienced with many competitors.

Is the Moto Z Play the phone to get? 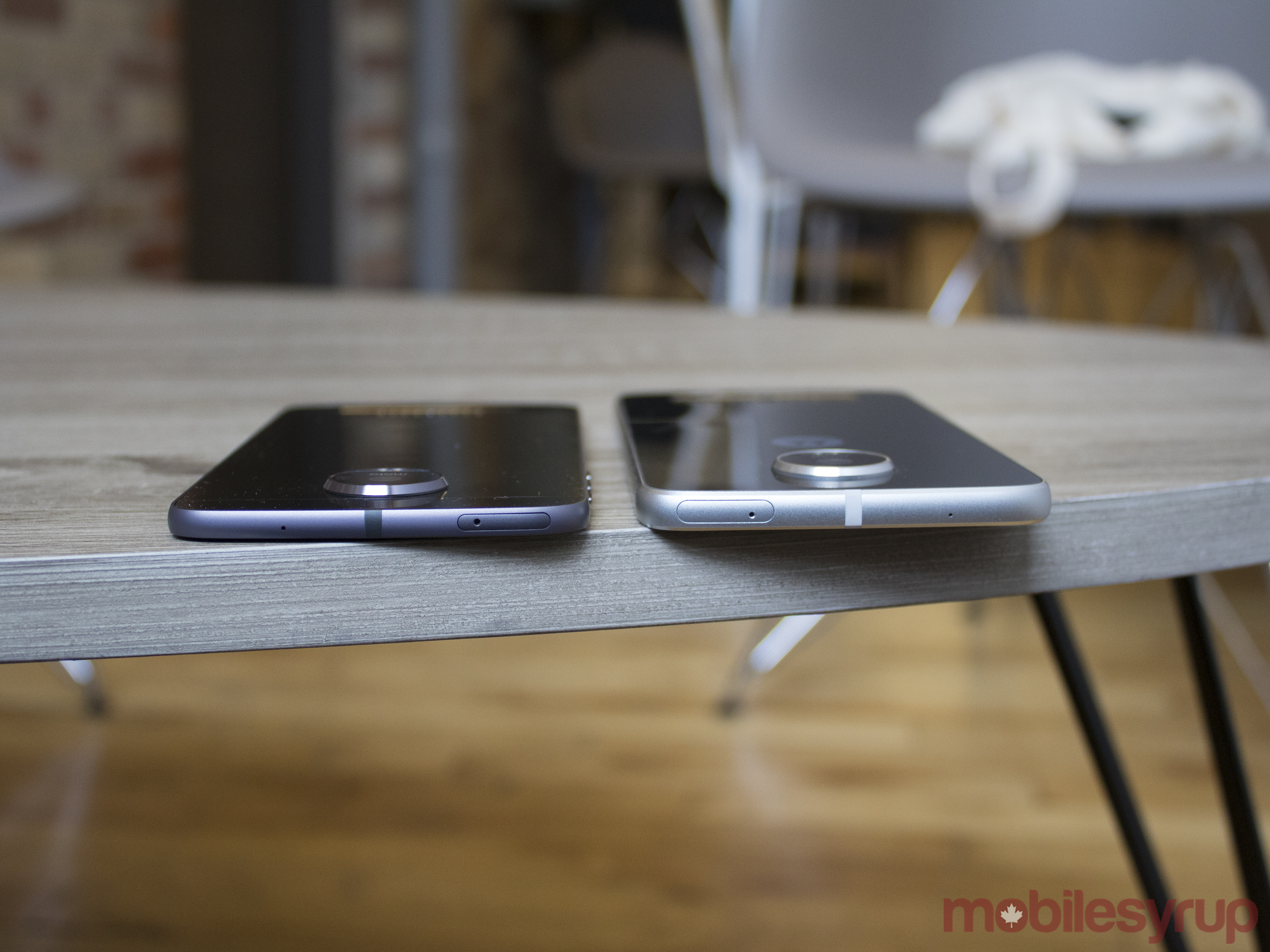 At $650, the Moto Z Play certainly outpaces its main competition in price, but the overall experience of using a zippy, premium-looking device with an unbelievable battery is so eminently pleasant that I wouldn’t hesitate to recommend it to even the most discerning Android connoisseur.

When it comes to pitting it against its $900 older sibling the Moto Z (which I admittedly have only played with briefly), I see a compelling argument for the Play. It’s a handsome, slender and reliable device with a significantly smaller price tag. On top of that, it has stunning battery life, an aspect of smartphone performance that is too often woefully ignored.

In case that wasn’t enough, it also retains the 3.5mm headphone jack. But while, in that respect, the Moto Z Play leaves one foot comfortably in the present, it also straddles the future with the addition of modularity. It is both groundbreaking and user-friendly, an immensely difficult mixture of qualities for any smartphone to attain, and one that makes the Moto Z Play one of the most superior smartphone choices on the market today.

Related: Moto Z Review: On the thin edge of innovation