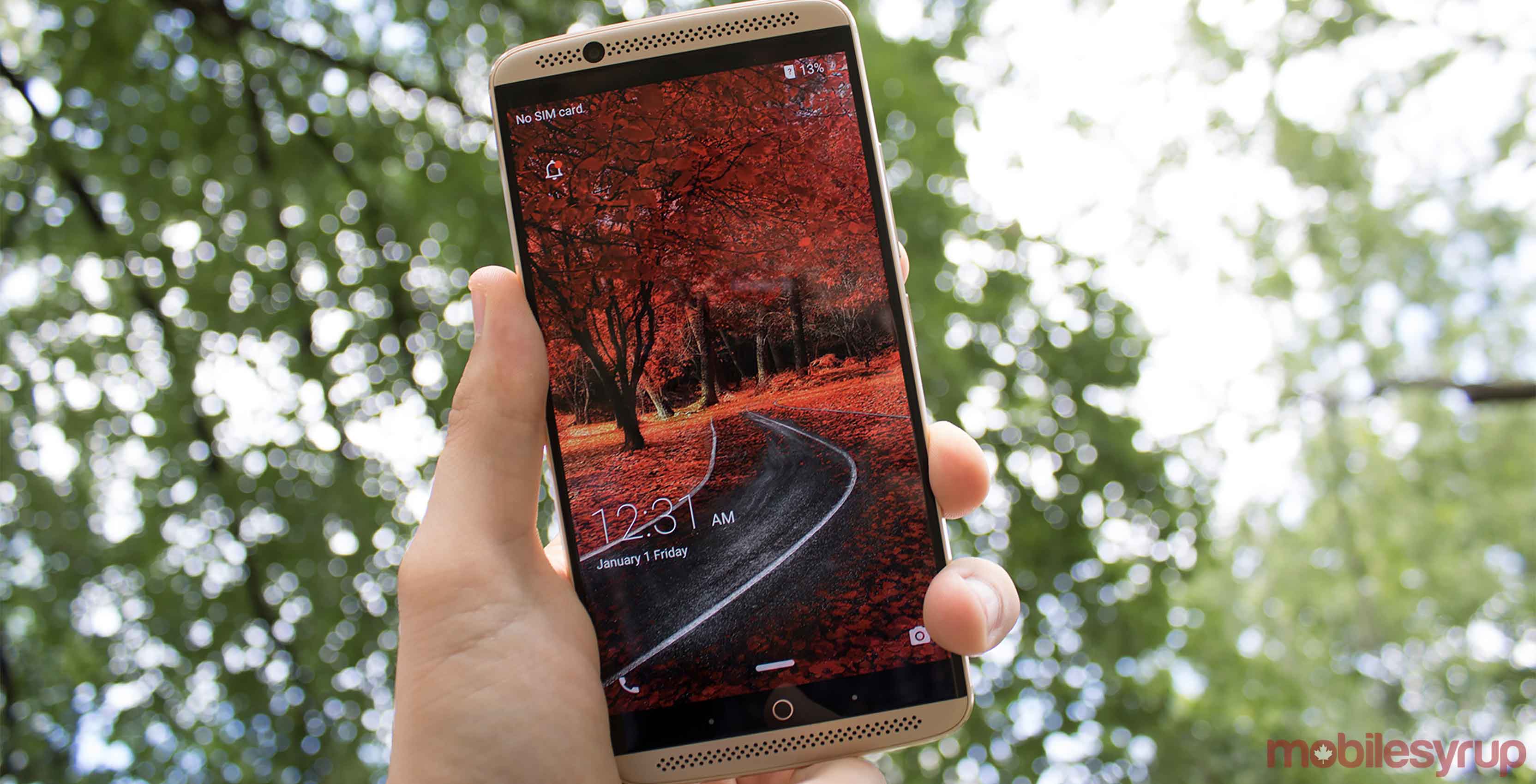 On paper, the ZTE Axon 7 is an impressive phone.

It offers premium specs — a Snapdragon 820 processor, 20-megapixel camera and Dolby ATMOS audio, among other things — for the very reasonable outright price of $519.99 Canadian.

The device is ZTE’s latest stab at a higher-end offering, and a marked improvement over the original Axon — but the question most hard-core Android enthusiasts want to know is whether or not it stacks up well against the similarly specced and priced OnePlus 3.

The answer, ultimately, is that the phone falls just short due to issues related to camera quality, design and processing that result in an inconsistent experience. At its price, however, the smartphone remains an enticing proposition. 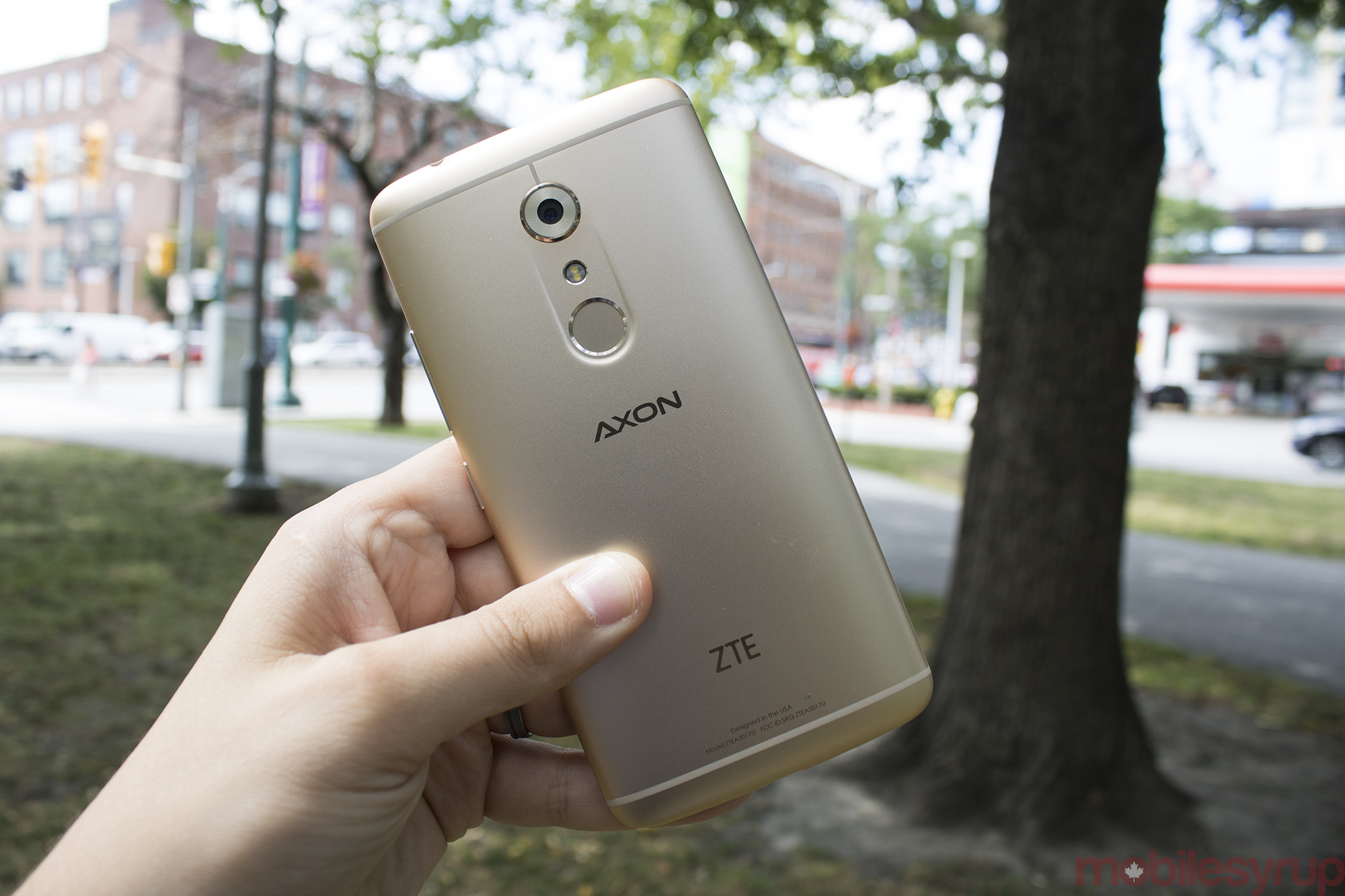 The ZTE Axon 7 looks great, thanks to a partnership with BMW that brings the design language of a luxury car. It has a beautiful full-metal unibody with a premium-feeling silky matte finish. We at MobileSyrup got the somewhat ‘blingy’ Ion Gold version, though Canadians can also opt for the more understated Quartz Gray version.

However, much of my pleasure at its appearance was drowned out by a particularly irksome aspect of the Axon 7’s design. The extremely sensitive power button was positioned squarely in the center of the right side of the phone, underneath the volume rocker. This set-up led me to accidentally turn it off, or nearly turn it off, multiple times a day.

To make matters worse, once when holding the handset, it rebooted, then froze on the Axon logo and couldn’t be budged for over an hour. Additionally, since the phone rebooted in my hand, I wasn’t able to see if it had been my errant finger that had caused the issue, or if the Axon 7 did so all by itself (this is an issue reported by other Axon 7 reviewers).

At 175 grams it’s also quite hefty, much heavier than the 158 gram OP3, and most other current Android flagships. It’s fairly bulky, too, at 151.7 x 75 x 7.9mm. However, the payoff for the clunky feeling of the phone might be its durability. The Axon 7 and its 4th generation Gorilla Glass survived a number of drops from standing during my time with the phone.

Another thing the Axon 7 certainly got right is the inclusion of SD card compatibility. In this, it bests the OP3, which cannot be expanded. 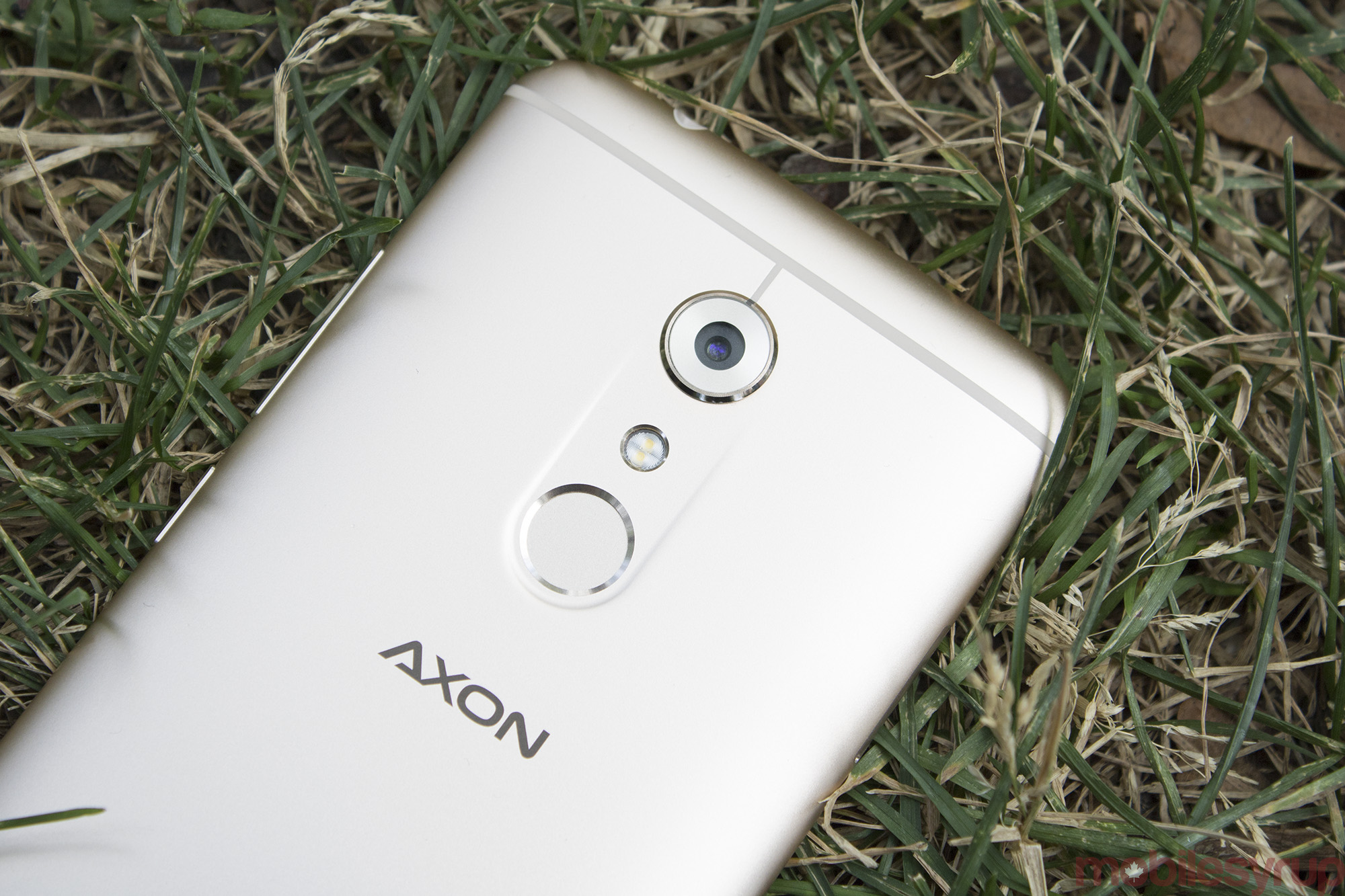 Like the rest of this phone, the camera looks great on paper. 20 megapixels with a f/1.8 aperture (outdoing the OP3’s 16MP and f/2.0 shooter) with dual LED flash and OIS. In testing it on auto-mode, however, I found it turned out photos that varied wildly in quality. Many came out quite grainy — particularly in mid to low light — and action shots were next to impossible to catch.

Both of these issues seem to stem from a noticeably slow shutter speed. It should also be noted that the camera takes almost two seconds to launch from the locked position.

When it comes to daytime shots, turning on the easy-to-use manual mode makes a worthwhile difference, especially for those who are a fan of warmer tones.

The device’s video capabilities are impressive for two reasons: it can capture 4K video, and it features dual microphones. While I only took 30 FPS 1080p video with the device, the quality was stunning, and the audio, on the fairly noisy soundscape of a windy beach, was superb.

As for the front-facing camera, it’s a very capable 8-megapixel shooter, that may even offer a little too crisp of detail of pores and blemishes for the taste of some (namely me), though that can be adjusted. 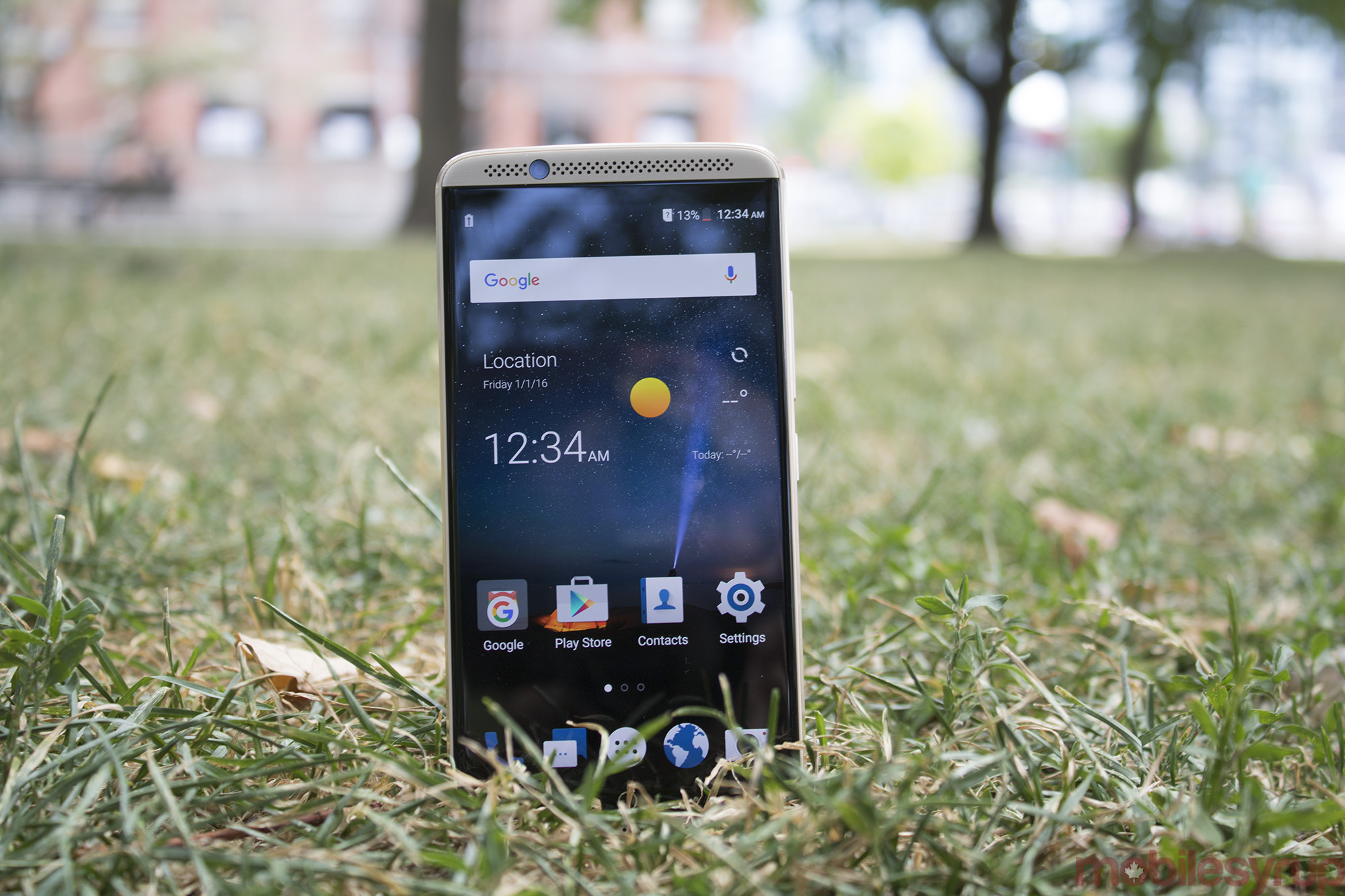 The main issue with the One Plus 3’s (OP3) display is the accuracy of its color rendition, an issue that blew up the company’s online forums until it released an update to giving users access to sRGB developer options, though this, reported many, was not entirely successful.

While I’m no colour accuracy expert, the Axon 7’s display colours appear correct, and the display looks noticeably richer than the OP3’s screen.

Sound worth bragging about 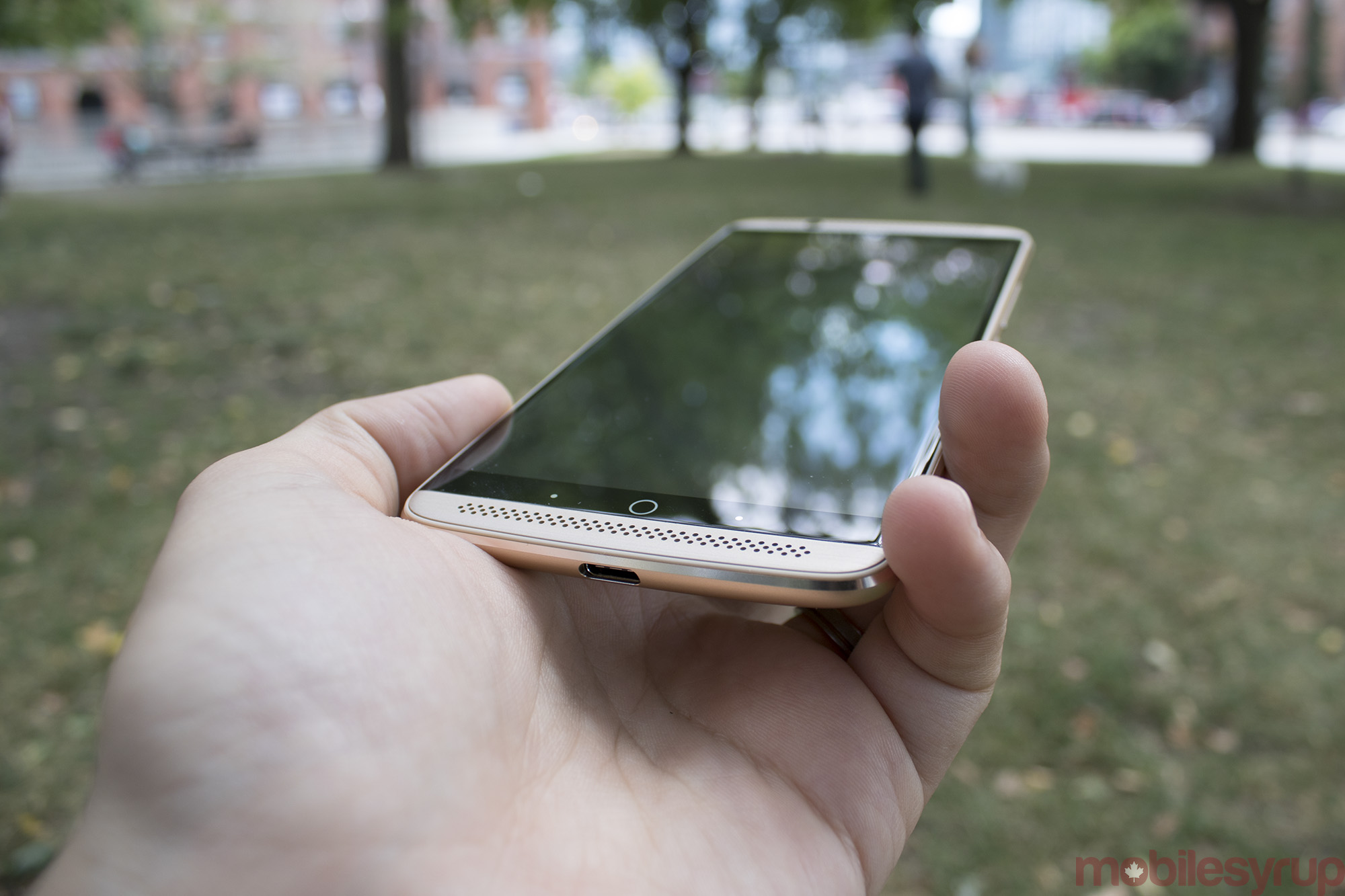 One of the key marketing elements for the Axon 7 was its audio quality. The device delivers America’s first 32-bit HiFi mobile audio with Dolby ATMOS and dual front-facing speakers.

The sound quality lives up to the hype, providing a level of excellence that I have previously never experienced with a mobile phone. The sound felt well-articulated and deep when playing music or podcasts from the phone using just the speakers, and lacked the tinny quality of most mobile phones—even when turned up to the highest volume.

The audio remained excellent through my Bose Quiet Comfort 15 headphones, though it was a less stark difference from other high-end Androids.

Of all comparable elements, this is where the OP3, which has nowhere near the same audio chops, suffers the most in comparison to the Axon 7.

As for calls, I found it slightly difficult to hear people over the phone in crowds or outside, enough so that I would always opt to use my headphones rather than the speakers. 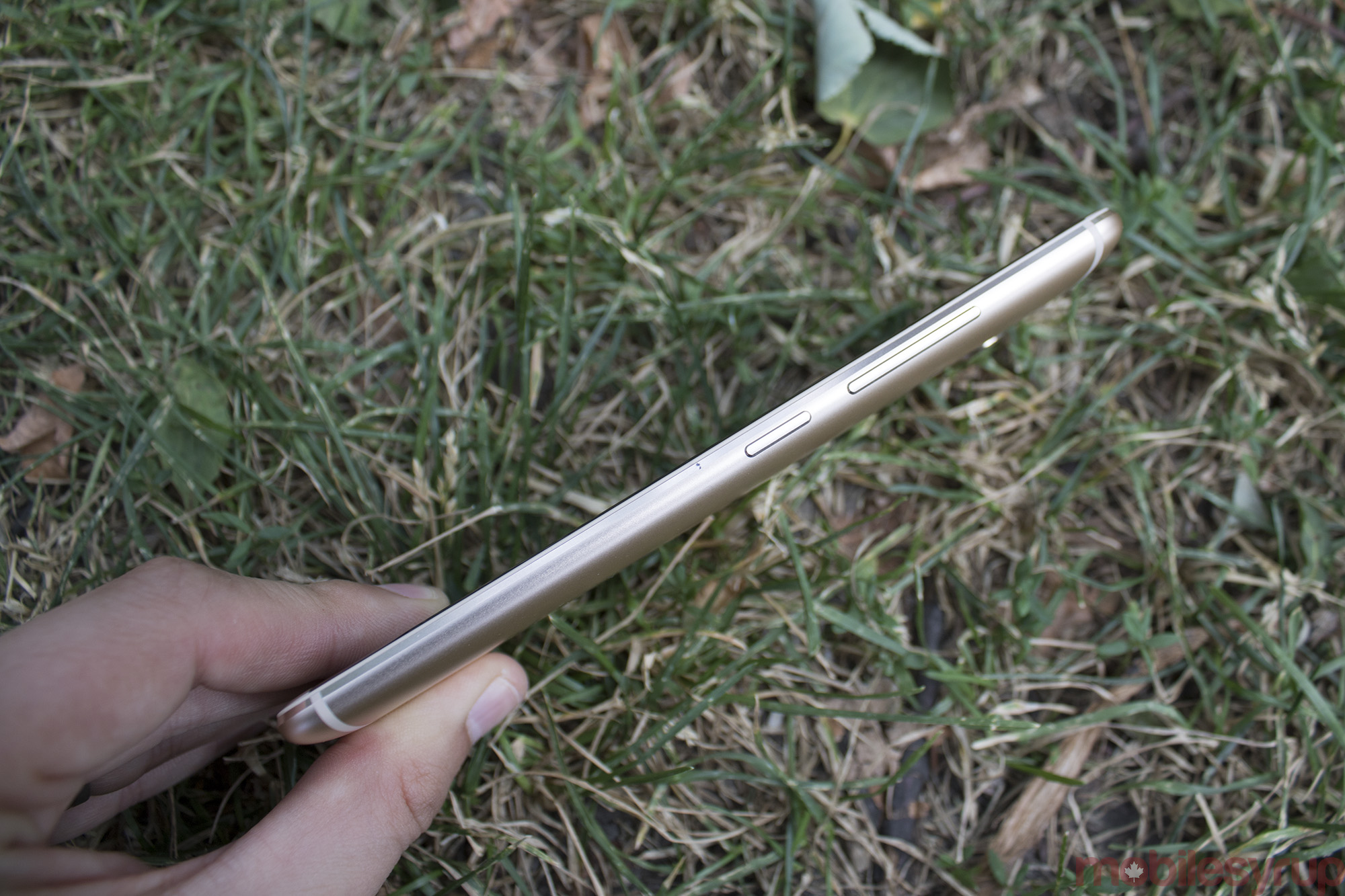 Like many aspects of this phone, when it came to processing it had great specs but strangely lacking results. The ZTE Axon 7 runs on a 2.15 GHz Qualcomm Snapdragon 820 quad-core processor with 4GB of RAM (the OP3 is the same but has 6GB). It also packs 64GB of internal storage.

While the majority of the time processing speeds were just fine, it managed to freeze up on me several times, with a few app crashes and, as mentioned in the design section, a notable period of time where it froze on its start screen for over an hour. Those experiences, coupled with another report of sporadic rebooting, made me feel wary with the device.

As for the great debate about RAM between the Axon 7 and its fierce competitor the OP3, I fall on the OnePlus side. Sure, the OP3 may not use all of its 6GB as of yet, but it’s future-proofing its devices with a larger amount for the same price, though it may only be a slight win for the OP3 currently, it’s still a win.

I will say, however, that I was impressed with its heat management. The hottest it reached was 42 degrees Celsius, and the majority of the time it was far below that temperature, even when I used heavy processing apps. 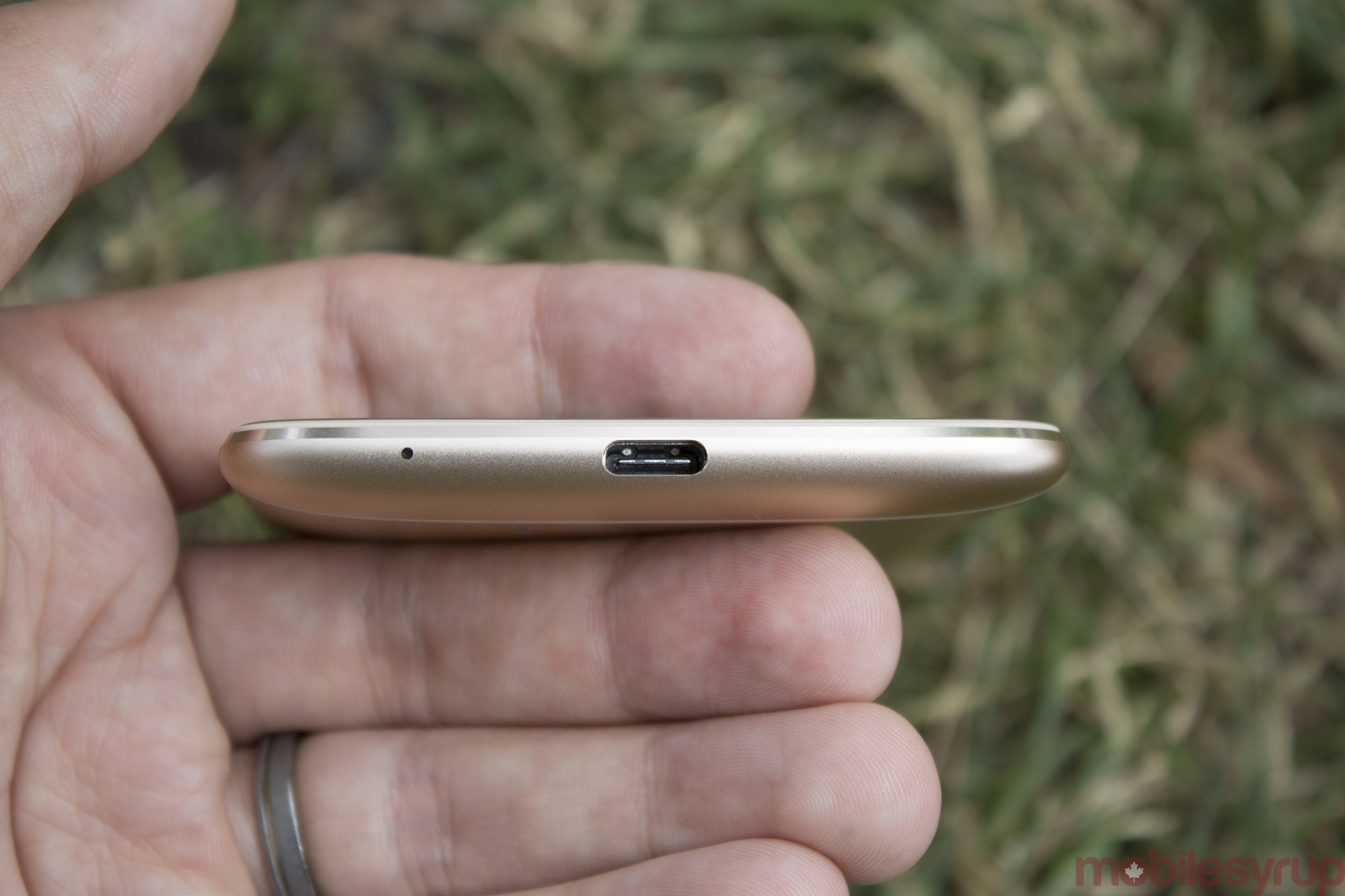 Under normal use, I was able to get around a day and a half of use out of the battery. For reference, my average daily use is about two hours of data browsing, four of Wi-Fi browsing, 30 minutes of calling and up to five hours of Wi-Fi music streaming. At points with slightly lesser mobile use I was able to stretch battery life to two days. All in all, I’d say it was a fairly admirable performance.

As for charging time, it lived up to its quick charge claims of about an hour and a half to reach full charge from zero. What I found more impressive was the fact that it remained relatively cool while charging, resulting in far less noticeable spikes that I’ve seen with many other Android devices.

This is especially nice to see considering it was an issue the Axon Pro previously struggled with. It also reduces the impact of heat degradation on the battery, meaning it could predict a long overall lifespan.

The eternal question of updates 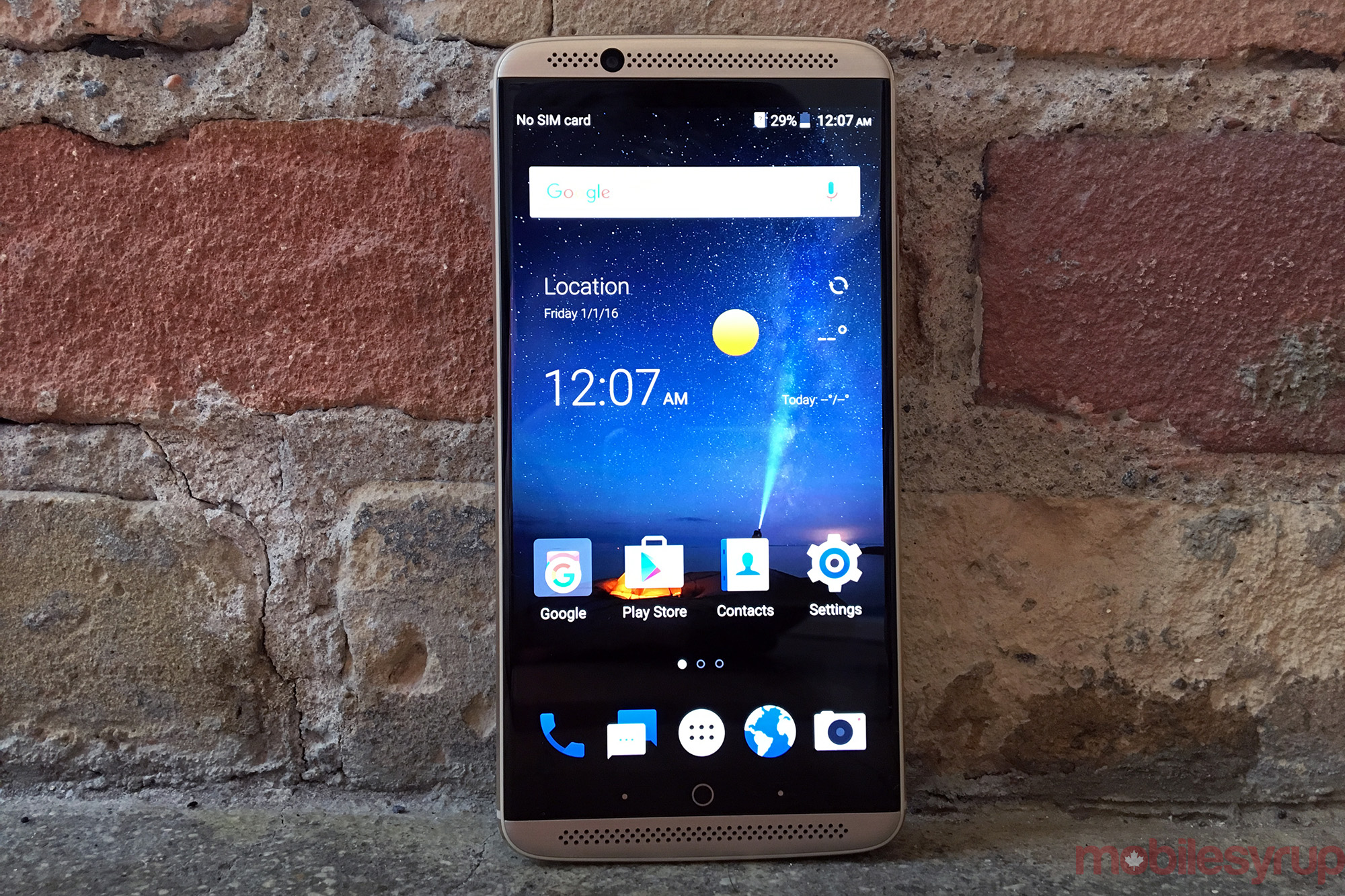 The Axon 7 purports to feature stock android Marshmallow 6.0.1, but it’s worth noting that there are definite caveats. For one, users will have to go into settings to switch from the MiFavor 4.0 skin (which brings along with it plenty of bloat-ware) to ‘stock android.’

Only, it isn’t really stock android. It’s MiFavor with an app drawer and Google widgets. This means that many of things which felt foreign to me with ZTE’s skin remained awkward. For instance, the fact that notifications don’t automatically show on the locked screen, requiring the extra step of pressing a little bell icon to show them.

In the grand scheme of things, however, a difference like that can easily be gotten used to, and isn’t necessarily worth belly-aching over, though it should be noted that the OP3 will feel a little more familiar to North Americans.

Perhaps a more decisive aspect in whether or not potential buyers should make the purchase is the frequency of Android updates. Thus far, it’s hard to tell whether ZTE will make more of an effort to update its high-end phones than it has with its truly budget offerings, which haven’t fared well.

The only real indication is that the Axon 7’s predecessor, the ZTE Axon Pro, got Marshmallow on February 22nd, 2015, about four to five months after the Nexus devices. That puts the phone somewhere in the middle, making it not the fastest or slowest adoption speed for a flagship.

If the Axon 7 isn’t late to the party when it comes to Android Nougat, the phone could be a great VR device since it features the specs that support Google Daydream, which OP3 does not. 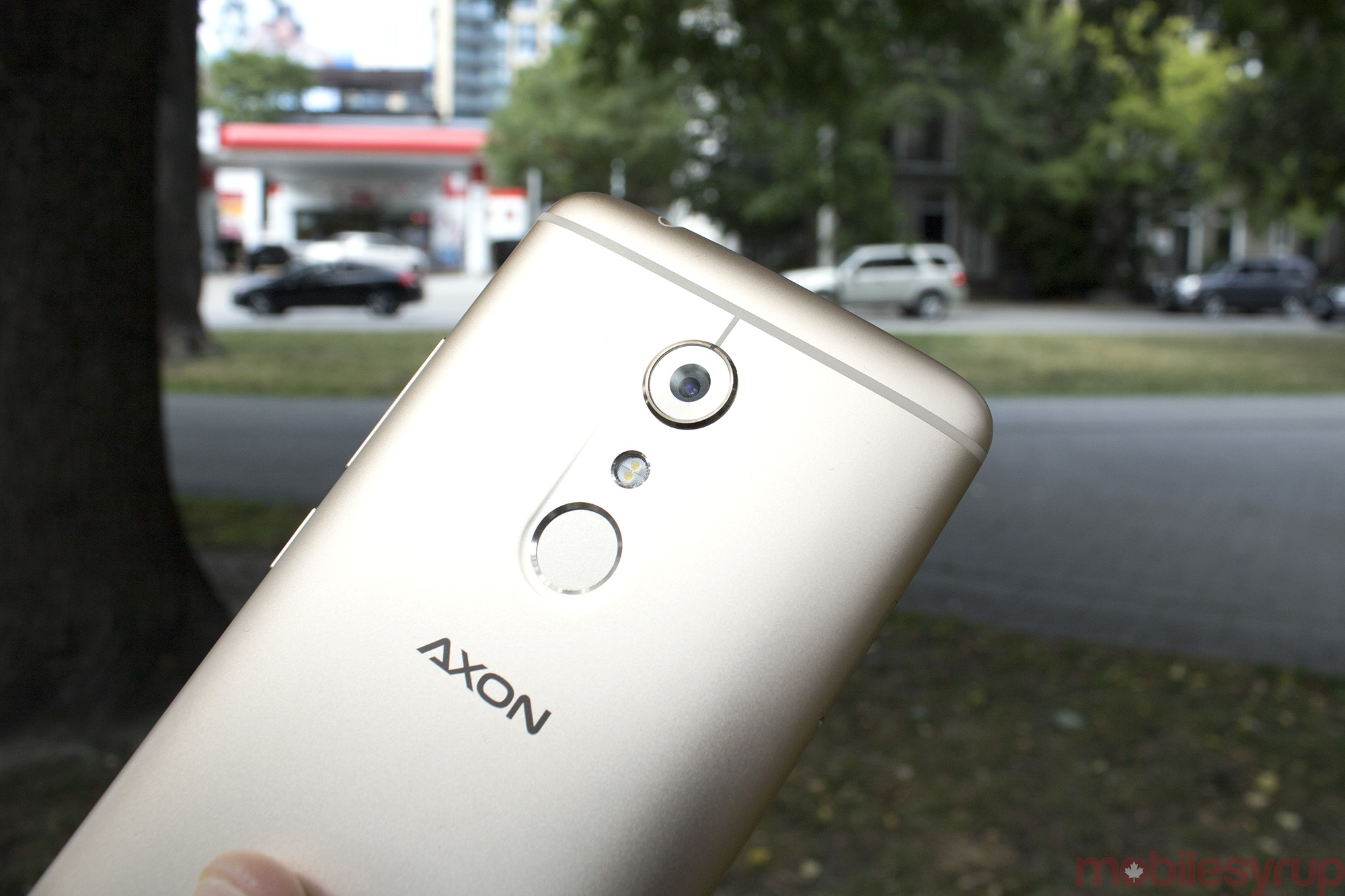 While this may sound great, other brands, namely HTC, have advertised warranty protection programs in Canada that are not, in fact, actually available here.

To make sure this was not the case, I reached out to a Canadian ZTE representative to confirm Passport protection was available up north. His response: “The Axon 7 does indeed have the Passport 1.0 warranty in Canada.”

The ZTE Axon 7 is, all things considered, a fantastic device at a terrific price point. On paper, in many ways, it outstrips the OP3. But when it comes down to the essentials -- processing, camera and design, in particular -- it feels as if the line has yet to fully find its feet, while the OP3, now on its third attempt to kill flagships seems a more confident and stable offering. Having said that, either would get my personal recommendation, and for audiophiles who are looking for a Daydream-compatible device, the scale certainly tips in the Axon 7’s favour. It may not yet be a flagship killer yet, but OnePlus should be wary, as ZTE is offering some very valid competition.

"The phone falls just short due to issues related to camera quality, design and processing"