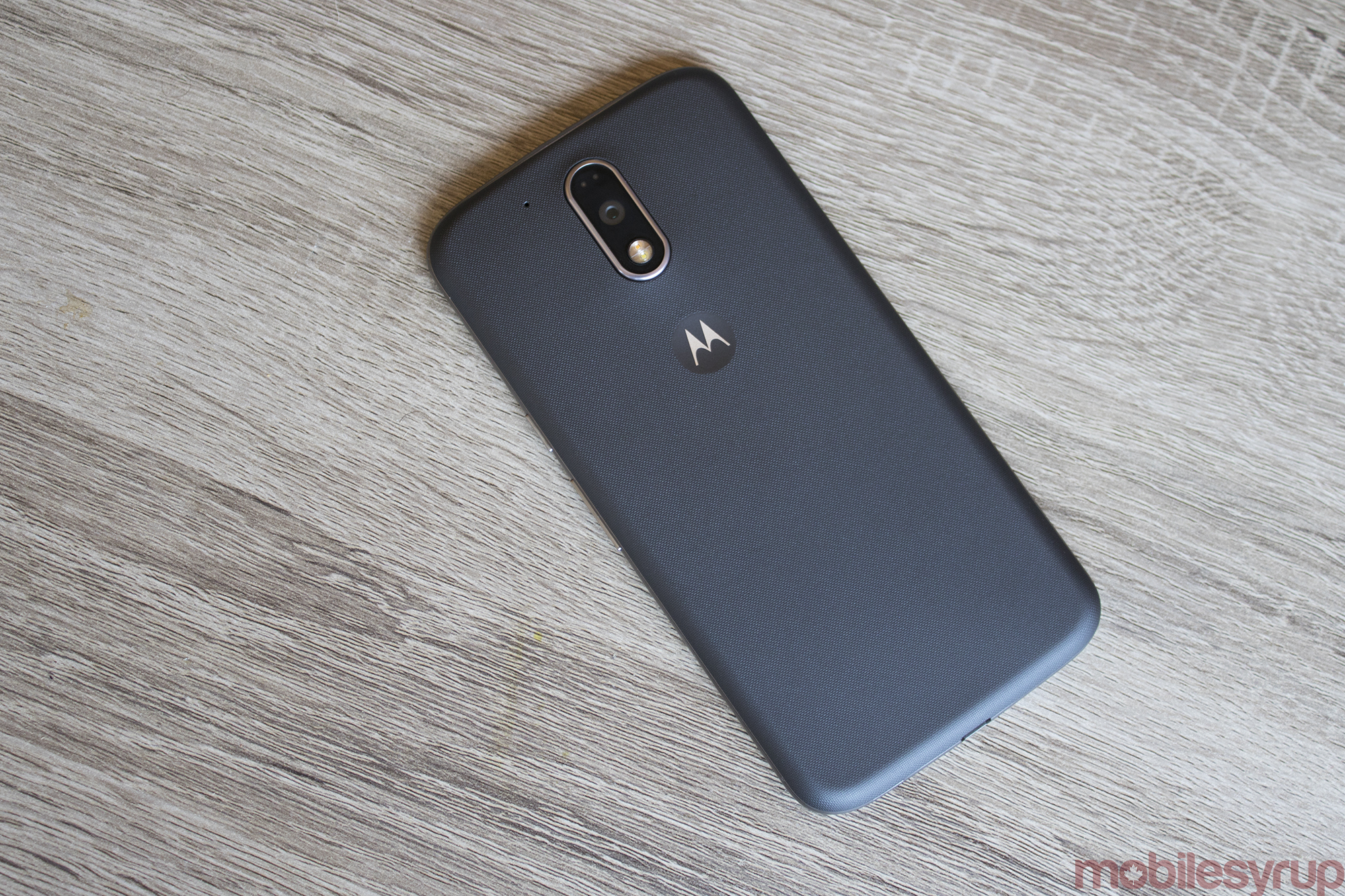 Moto G phones are not exciting. They’re not sexy and they’re not powerhouses. But they get the job done, and do it for a reasonable price.

Since the line’s launch in 2013, that has always been the appeal of the Moto G line. With the Moto G4 Plus, however, Lenovo is pushing the envelope by biggie-sizing its device, adding in some premium features, and bumping up the price to nearly midrange.

Retailing for between $399 and $410 outright at Virgin, Koodo, Telus, Rogers, Wind Mobile and SaskTel, the Moto G4 Plus is poised to become many Canadian’s next zero-down phone based on price and availability alone. 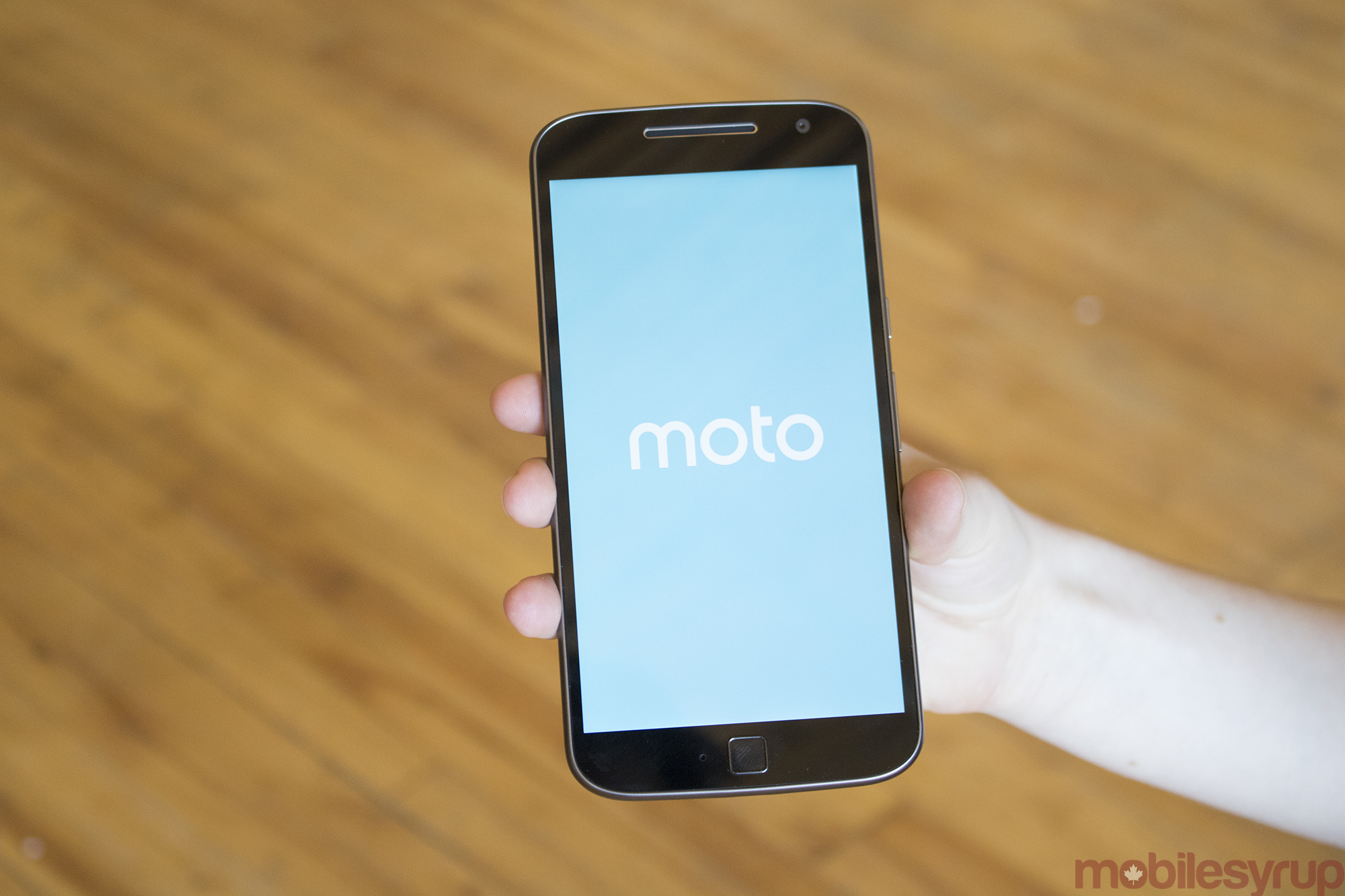 I’ve heard nothing but negative comments so far regarding the Moto G4’s appearance – mainly from MobileSyrup’s own Patrick O’Rourke, whose opinions you can see for yourself below.

I can’t say I understand the sentiment. Sure, it’s not the Gigi Hadid of phones. It doesn’t have the premium allure of an iPhone 6S or Samsung S7. It doesn’t even come in white in Canada. But I appreciate it for what it is — understated and simple, with a durable look that says “It’s okay, drop me as much as you want. I’ll be fine.”

Sure enough, during my time with it I’ve dropped the Moto G4 Plus several times without issue. 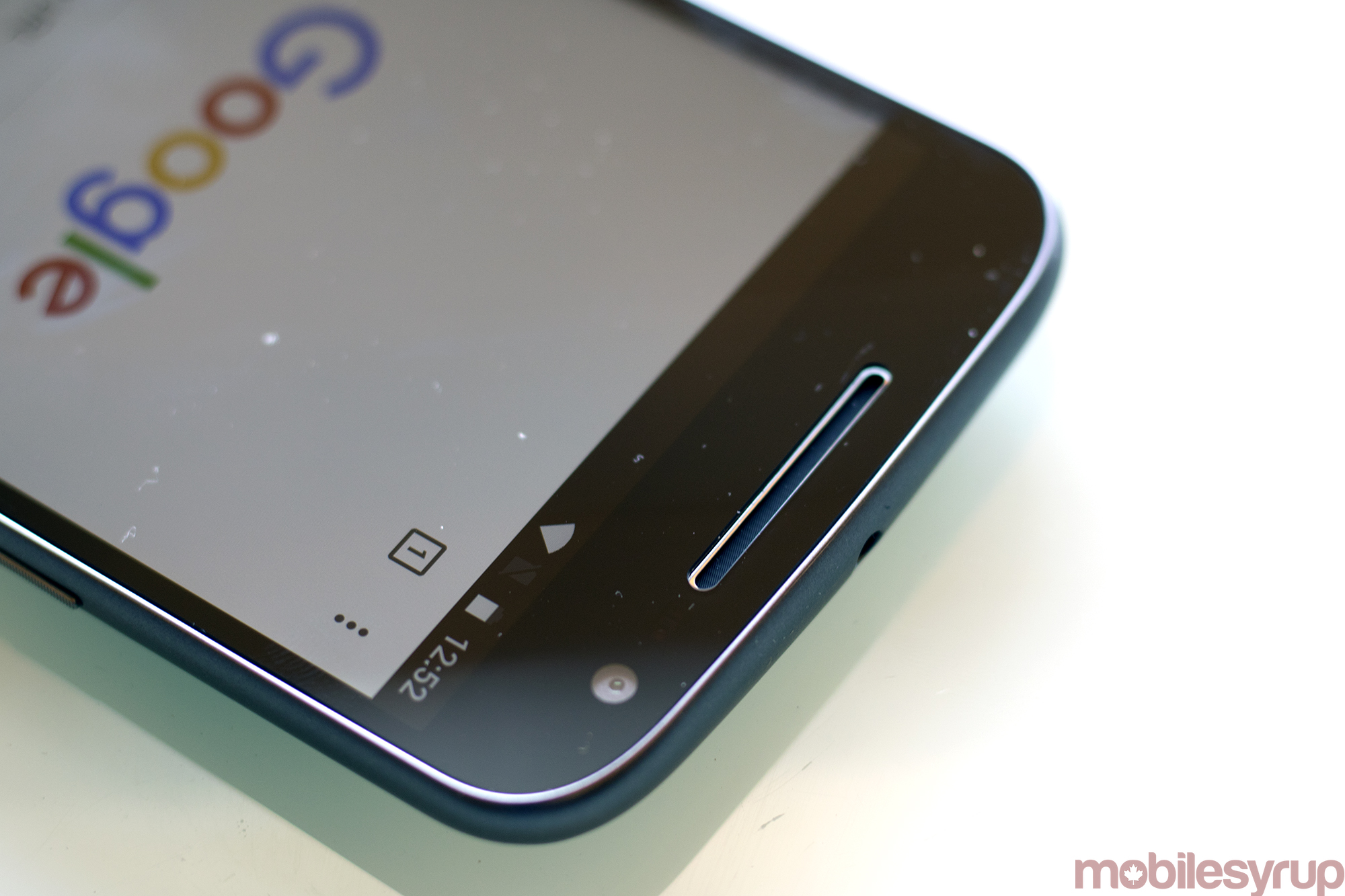 The front features one speaker up top, which does an admirable job of pumping out high-quality sound, alongside the front-facing shooter. Down below there’s the famous square fingerprint reader, which was the star of this phone’s leaks. Aesthetically, I personally don’t take issue with its shape or size. It’s different, but it works well, with a low false rejection rate.

The phone’s 5.5-inch 1080p display, up from a 5-inch 720p in the Moto G3, offers a screen large enough to make watching videos on the go enjoyable. It’s not particularly vibrant, especially in comparison to Samsung’s AMOLED offerings, some of which are in a similar price range, but it’s not dull either.

There are better mid-range devices out there

I want to like the Moto G4, I really do, but I’ve found it difficult to get past the phone’s ugly exterior. Unlike Rose, I can’t stand the G4’s faux leather backing (I know it’s not actually leather) and square fingerprint scanner. It makes the phone stand out with a unique aesthetic that I feel just doesn’t work, though I’m sure many out there will like the G4’s cheap feeling shell.

At an outright cost of between $399 and $499, there are better midrange devices out there that are both more powerful and better looking aesthetically, like the Nexus 5X for example, which offers a pure stock Android experience, though Motorola’s version of the OS is pretty close to the stock version of Google’s OS.

I also found the phone’s camera simply average. Similar to other mid-range devices, it performs well under ideal lighting conditions, namely broad daylight. If the phone is forced to shoot in lowlight conditions, images tend to feature a significant amount of noise.

It’s not as if the camera is horrible, it just doesn’t live up to the G4’s loft goal of matching the iPhone 6s in terms of photo quality, a fact the company boasted about during a hands-on briefing ai attended for the device. 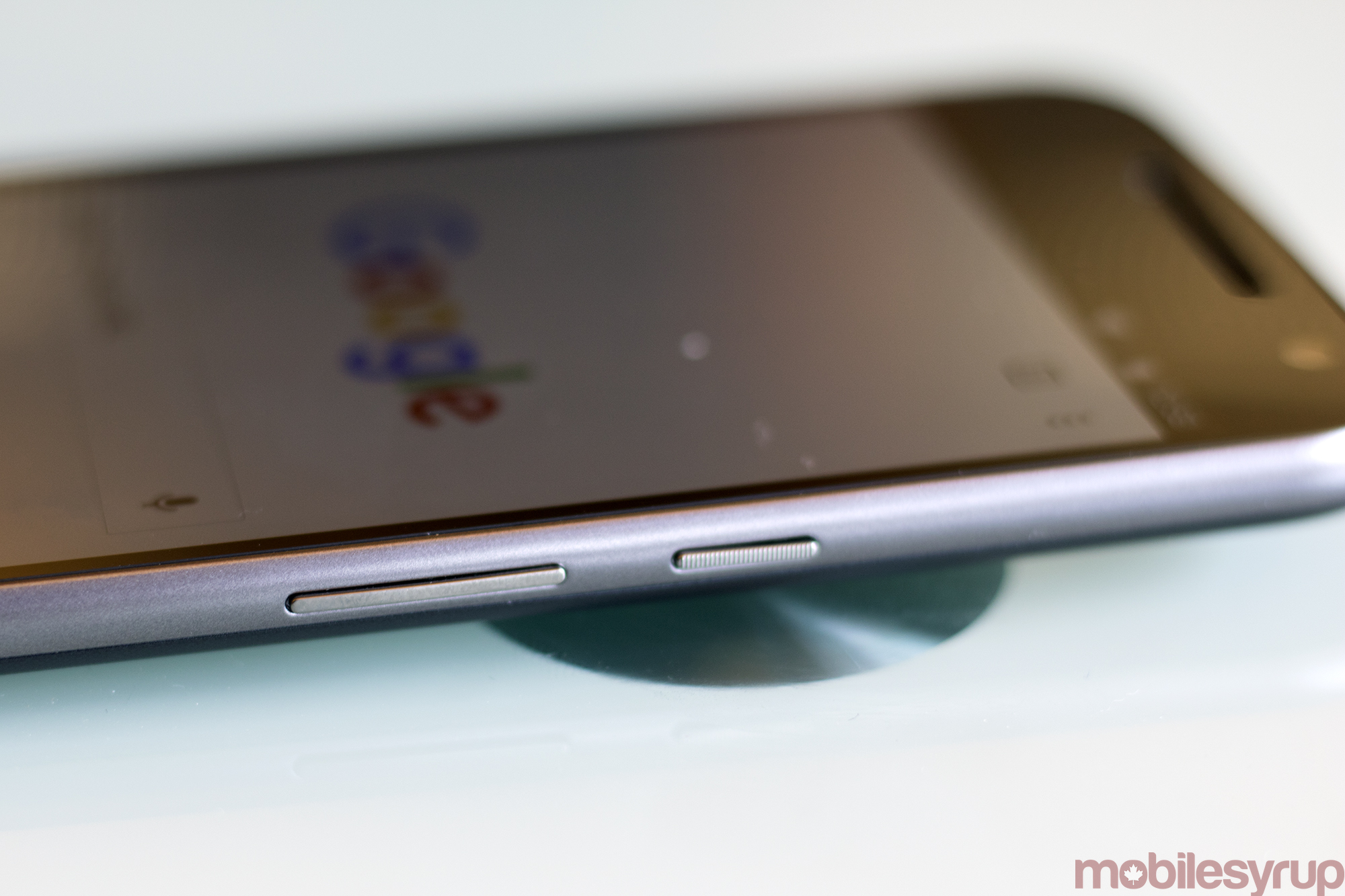 The G4 Plus’ textured plastic back gives it a decent amount of grip, with a smooth dimple holding the Motorola logo. Above is a raised platform with the camera and dual-tone flash. The back pops off easily for access to SIM and MicroSD slots. One would think that the battery would also be accessible, but unfortunately it’s non-removable.

The Moto’s silver frame is also made of plastic, though it looks like metal, and houses the power button and volume rocker on the right-hand side. It also houses a 3.5mm headphone jack at the top of the phone, a somewhat awkward arrangement that made me turn the phone around every time I put it in and or took it out of my pocket.

At the bottom is the phone’s MicroUSB charging port, which makes the device far from future-proof, but easier to find cheap cords for in a pinch.

Unlike the Moto G3, the G4 Plus is not IPX7 certified (water resistant up to a meter and 30 minutes), but does have a water repellant nano-coating that Lenovo says protects against spills, splashes or light rain, which doesn’t sound particularly assuring.

For its size and bulk, the Moto G4 Plus’ 155 grams feels relatively light, especially compared against other plus-sized phones. For example, the iPhone 6S Plus is 192 grams, 37 grams heavier than the G4 Plus, and only about 5 mm longer, and 1 mm wider.

The Samsung Galaxy S7 Edge also outweighs the Moto G4 Plus at 157 grams, and is smaller in all dimensions. All this translates to a fairly comfortable feel in the hand. As someone with very small hands, it can be a bit unwieldy, but better than many large smartphones due to its lightness.

Consistent, but not flawless performance 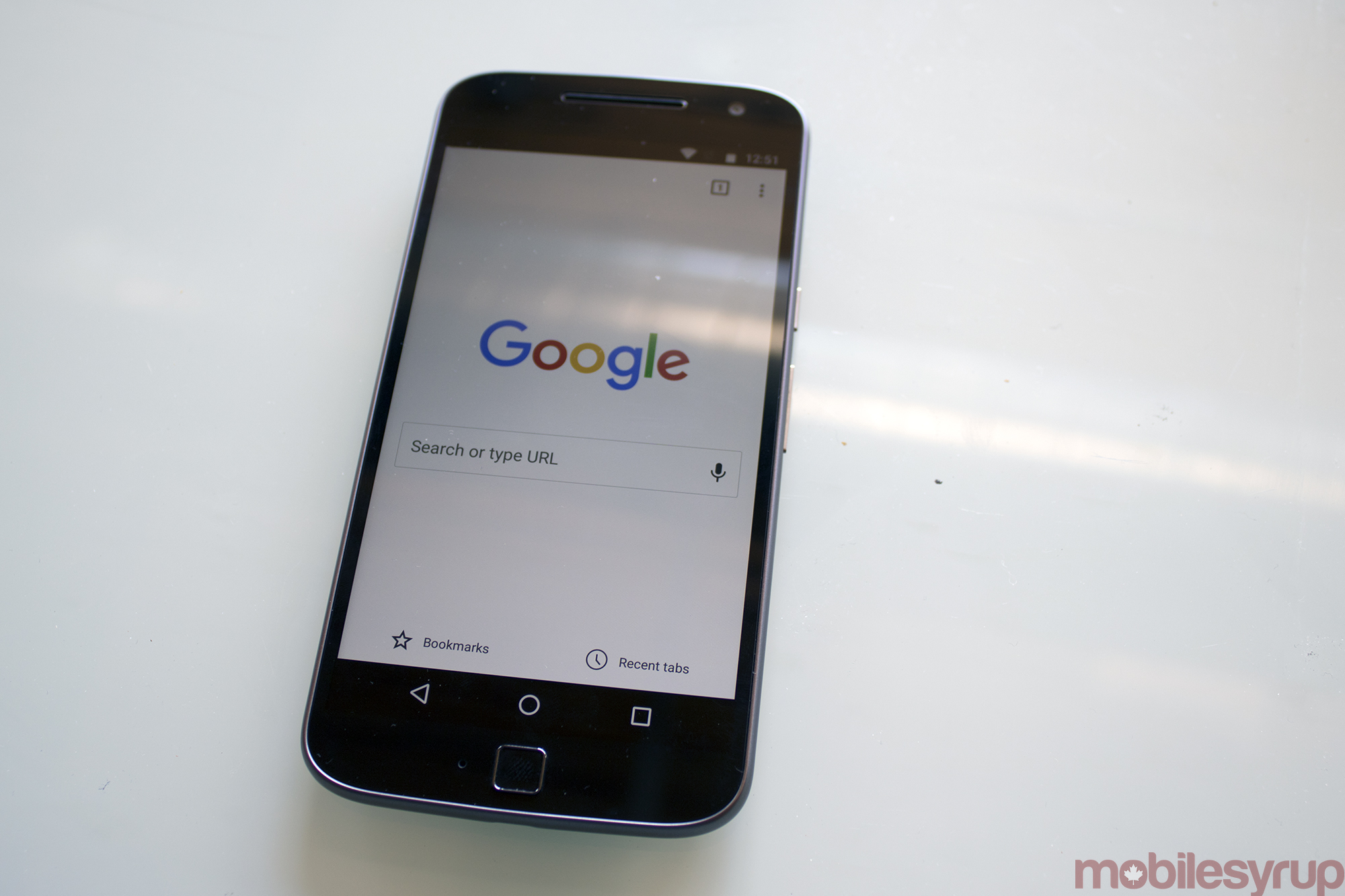 The performance of this phone was impressive for its middling 2GB of RAM and Snapdragon 617 1.5GHz octa-core processor which, it should be noted, is a vast improvement from the G3’s Snapdragon 410 quad-core SoC.

It handled heavy use with fairly consistent stability, though it did tend to slightly overheat, an issue which I get in to further in the battery section. I also had several resource intensive apps quit on me throughout my week or so with the phone, likely the result of the G4 Plus’ paltry RAM, but that didn’t happen enough to become a cause of  real frustration.

The G4 Plus’ ROM, thankfully, is not paltry. In a big upgrade from the 3rd generation Moto G’s 8GB or 16GB of internal storage, the G4 Plus packs 32GB, a major selling point for the device in comparison to other budget phones that can be purchased through Canadian carriers.

On the flip side, the omission of an NFC chip is a major detractor. While most users wouldn’t use NFC regularly, it’s crucial for mobile payments should some form of Android Pay come to Canada, and it’s the best method for device to device data transfers.

The Moto G4 Plus runs Marshmallow, Android 6.0.1, skinned with Moto Pure, which doesn’t do much to alter stock Android, something I consider a bonus. It’s simple, free of bloatware and easy to navigate, with the top pull-down shade providing you with notifications and any settings you might need to quickly access.

One thing Moto Pure does add to the phone is some interesting gesture functionality, including a twist of the wrist to open the camera, and a shake to turn on and off the flashlight.

A shooter that more than passes muster 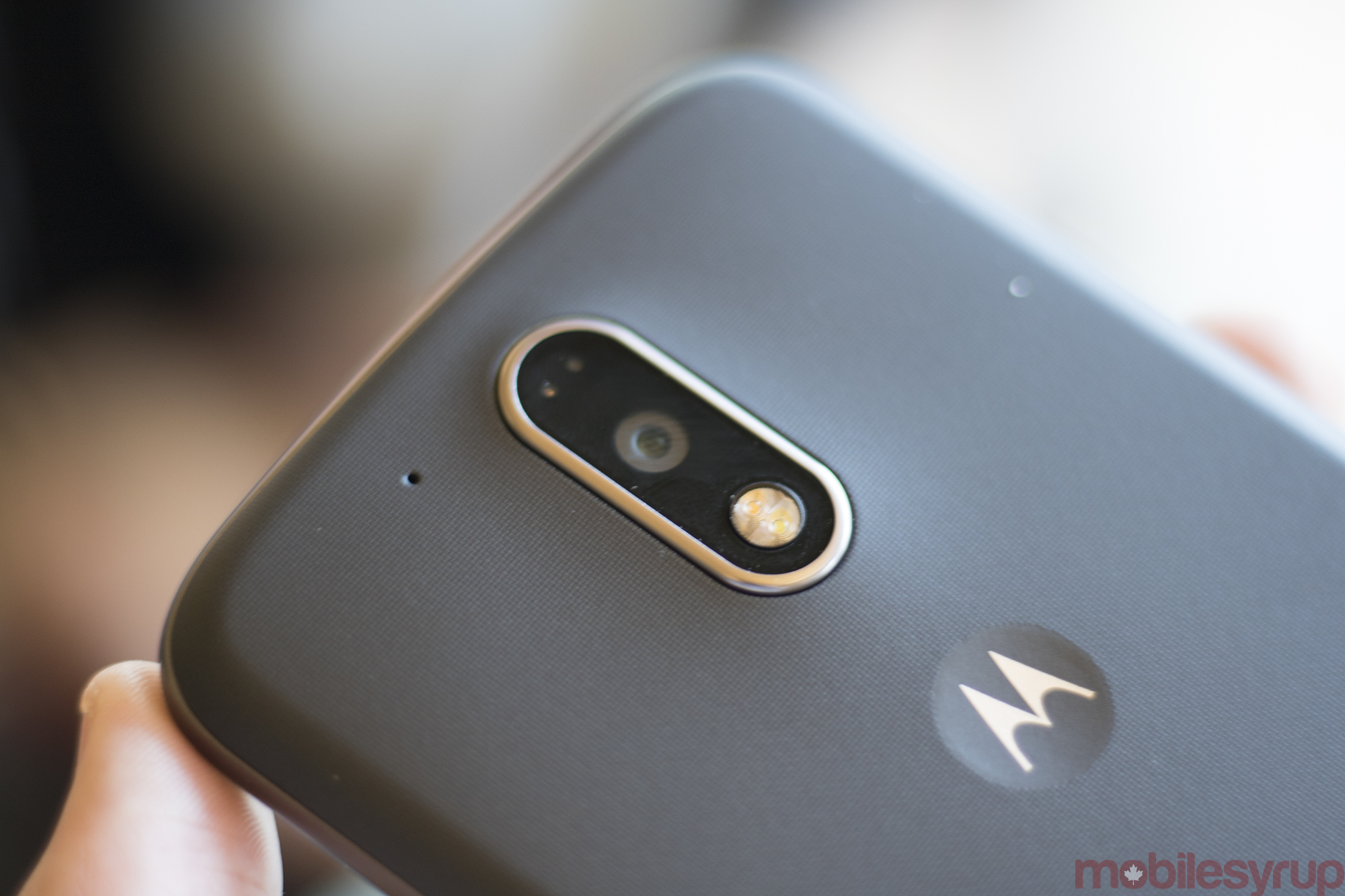 The G4 Plus’ 16MP rear-facing camera serves up impressively high-quality, auto-HDR photos for a budget phone, with its f/2.0 aperture, laser autofocus and a dual LED flash.

Professional-looking close range shots were particularly easy to take, but when attempting to snap good distance or low-light shots, it was often necessary to manually adjust the exposure to ensure the pictures weren’t too dark or washed out.

Essentially, the quality of a quick point-and-shoot photo isn’t guaranteed. Fortunately, professional mode is easily accessed on the right-hand side of the shutter button, along with a panorama and slow motion mode.

The secondary, front-facing shooter is a standard 5 megapixel camera with a f/2.2 aperture and auto-HDR that provides decent pictures that are a little soft on definition, which is fine for selfies. 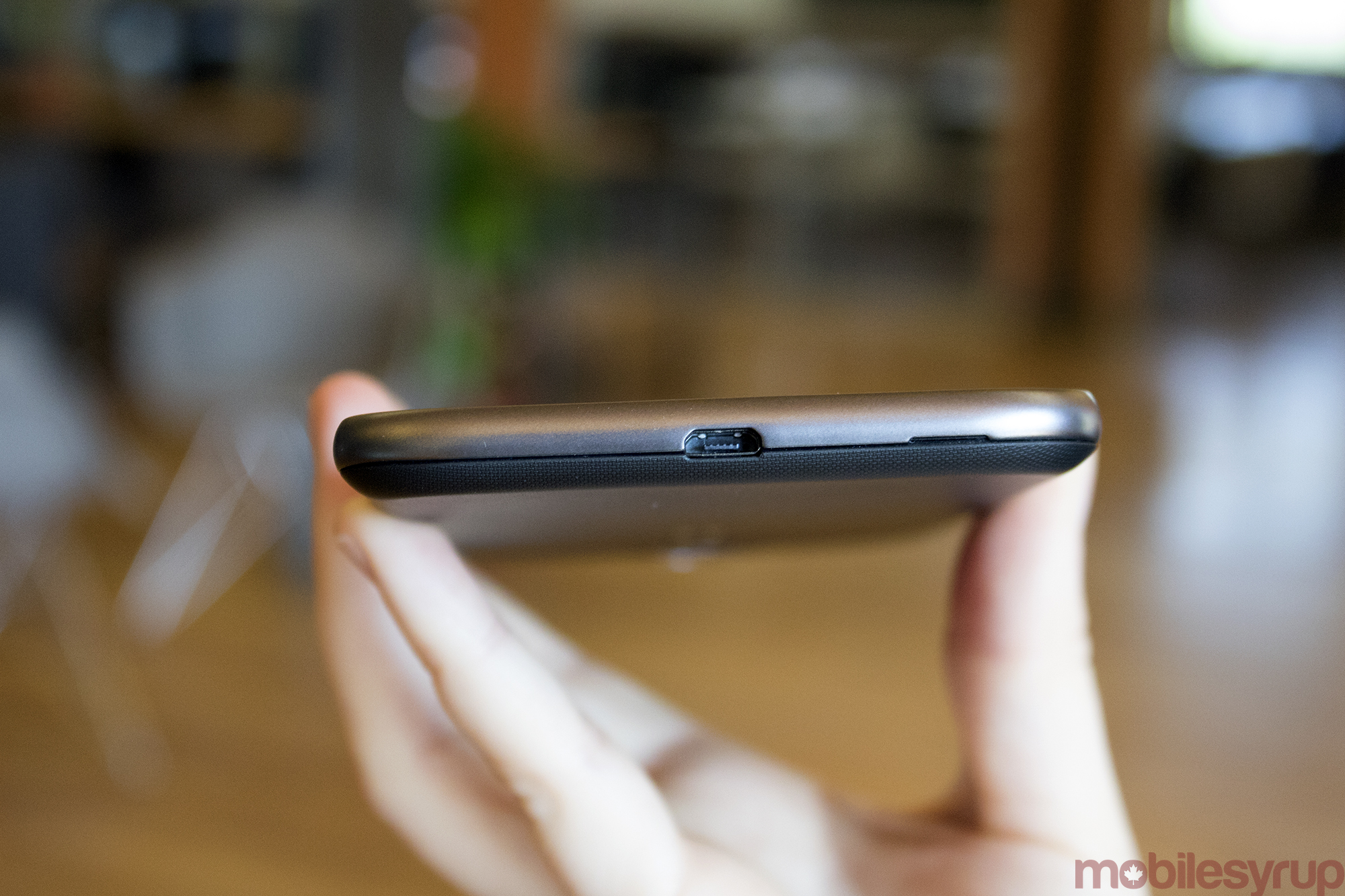 The Li-Ion 3000mAh Battery and Snapdragon 617 processor slightly overheat when stressed or charging, even without a case.

While completing a stress test to test its processing performance the phone reached almost 45 degrees Celsius. It also jumped to 42 degrees Celsius when charging while turned on and active. Neither temperature felt uncomfortable in my hand, particularly because the back is plastic, not metal, however, there could be cause for concern when it comes to heat wearing down the battery.

Research shows that a lithium-ion battery stored at 40 degrees Celsius will lose 15 percent of its capacity over the course of a year. According to the data brought in so far, the G4 Plus I’ve been testing has been resting at an average of 29.5 degrees Celsius, so the battery should degrade at a slower rate than 15 percent per year, but perhaps faster than it should. Ultimately, only time will tell how the battery will hold up and whether or not heat will become a larger issue.

Other than that, the battery stands up admirably. It lasts over 24 hours with fairly serious use and its fast-charge time clocks in at under two hours when plugged in directly to the power outlet. 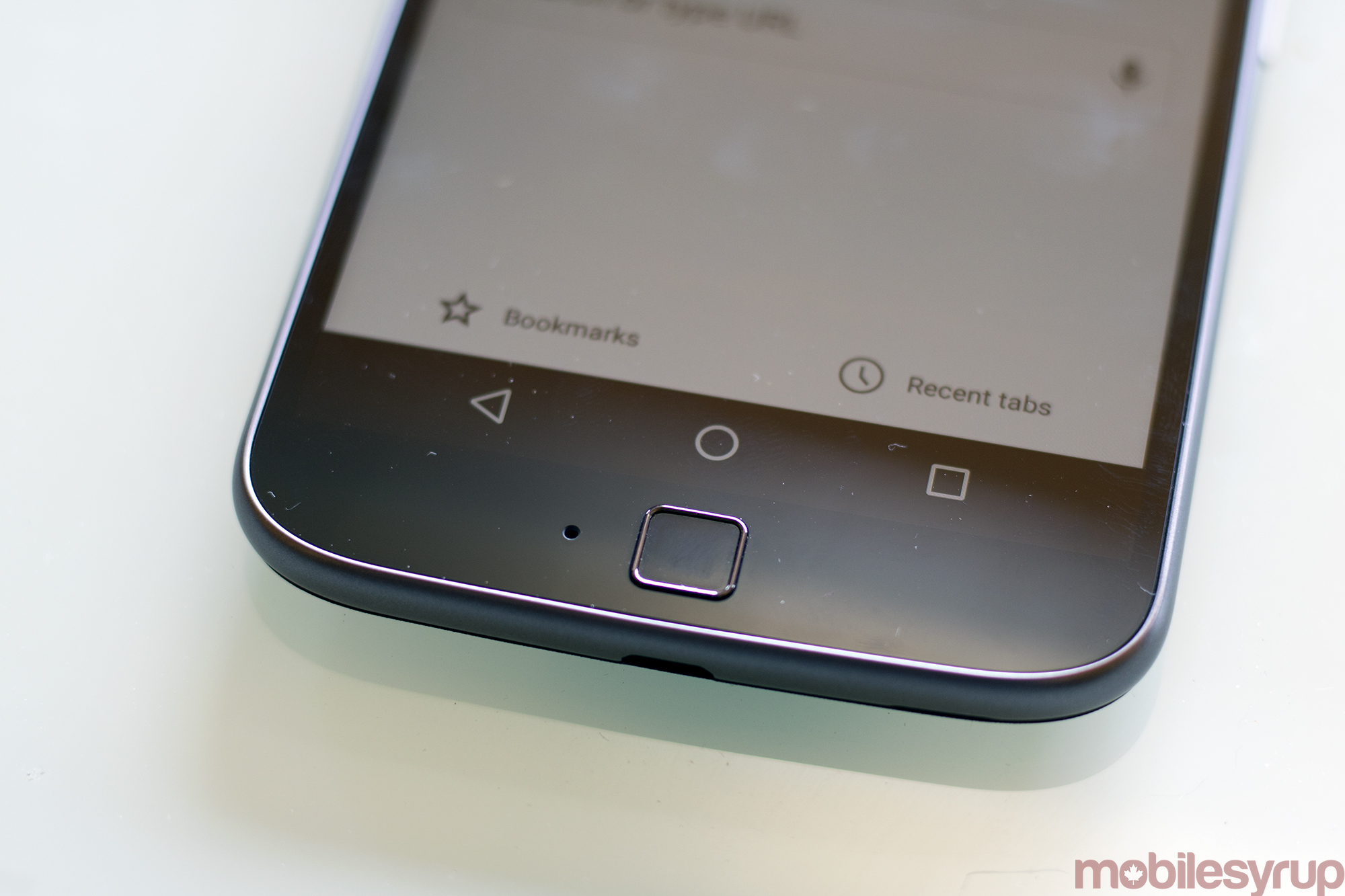 All in all, the G4 Plus was what I expected it to be: not the phone you want, but the phone you need. The phone offers Canadians a dependable performance, sturdy build, respectable appearance, plenty of internal storage and a decent camera for approximately $400 before tax. Its downsides – overheating leading to potential degradation of battery, slightly dinky computing power, no NFC – don’t amount to a deal breaker for me, and likely won’t for many other Canadians.

Ultimately, it’s a strong candidate for a low-cost and reliable upgrade or activation that can be paid out over two years. If that still doesn’t fit in the budget, the Plus’ sibling, the Moto G4 Play is due later this summer with a 5-inch screen, quad-core processor and lower price tag. After using the Plus, I see potential for the Play to be the next great budget option.

After all, the Moto G line phones may not be sexy or all that powerful, but they get the job done.