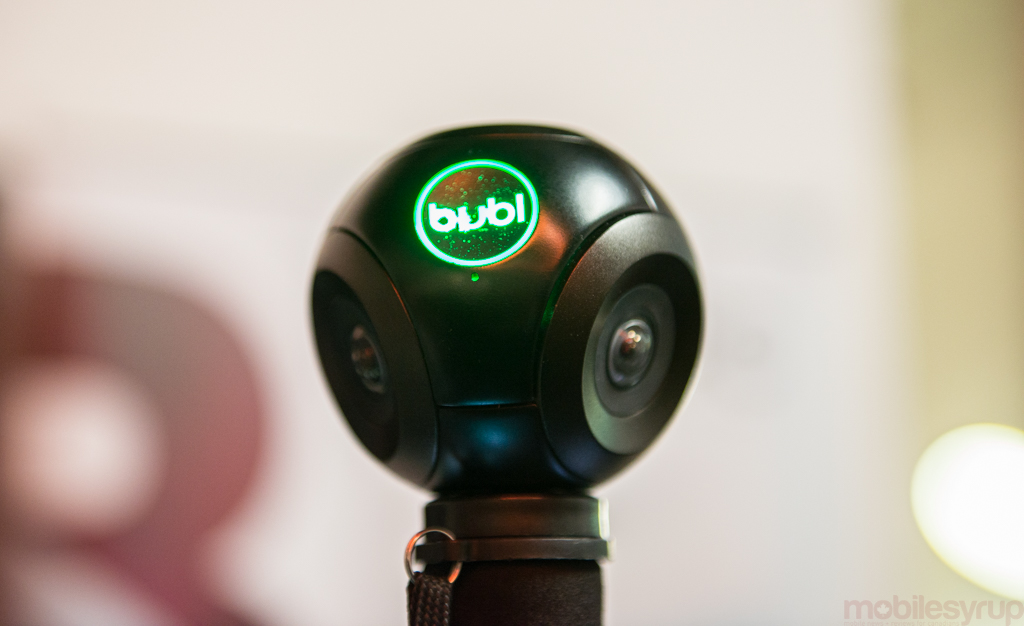 At the WEST Conference wearables event yesterday, we were fortunate to spend some hands-on time with the Bublcam 360° camera in the demo pit. Designed by Toronto-based Bubl Technologies, the Bubl takes spherical photos and video using a four-camera, tetrahedral design, and advanced real-time image stitching and stabilization software.

Bubl’s stitching works better than anything we had seen in person previously, and despite some problems with the overwhelmed conference Wi-Fi, the streaming of the camera’s view to the Samsung tablet in front of us was actually real-time. Bubl is shipping devices out to its KickStarter backers next week, and we’re eager to spend some more time on a unit filming the shenanigans at MobileSyrup HQ. While you wait for a more detailed review, why not read my interview with Bubl CEO Sean Ramsay, done right after his Creating Media Experiences Using Virtual Reality panel participation at WEST?

What is Bubl designed to do and who is it for?

Bubl has been designed to recreate the real world, at least visually, so that we can experience it – whether that’s through photos or videos. At first we were just looking at Bubl for lifestyle stuff – baby monitors to watch your kids, or if you’re travelling and want to take vacation photos, it’s the best way to show what it’s like to be there – but we’ve seen growth in ways that we never expected. Like, the drone market market is taking off in such an incredible way, and their primary use case is to carry cameras or carry sensors, and we make a camera that can see everything at the same time, so it’s a really beautiful fit.

Through the VR world, there’s this whole issue with waiting for content to be developed. If you can go out and capture your content instantly, and place it in your VR headset, you don’t have to wait. User-generated content for VR is not something that people talk about because it doesn’t really exist, but we can now make that a reality.

On your WEST panel, there was a conversation about this merger of what has been traditionally thought of VR and AR. It seems like there almost needs to be a new term for “digital reality” – for taking real-life, digital representations, and manipulating them in 3D. Do you think you camera is designed to capture the information to enable that?

The issue is that there’s only a handful of these camera out – we’re like one of the only ones that’s going to be actually commercially available. So it does mean that it’s going to take time for the space to grow, and the education level is one of our biggest hurdles.

That’s really interesting. I just got back from vacation in Ireland, and I spent the whole time taking photos of the beautiful vistas in panorama mode on my iPhone because there was so much there that I couldn’t fit it in a normal view. I needed to go broader.

In terms of consumer education do you think that people grasp this idea that you can simply pop up a sphere and grab everything around them?

I completely understand because I was in the same boat. When I started to recreate environments by capturing bubls, I didn’t want to use my smartphone camera anymore, because the experience I create with my Bubl camera is just so much more… what’s the word? Immersive? It just showcases ‘this is where I am, this is what’s going on’ so I stopped using my phone half the time.

Interest levels from the general consumer base has been incredible so far. I was just in London, and kids from 13 to 18 were giving it a try, and they already get it better than we do. 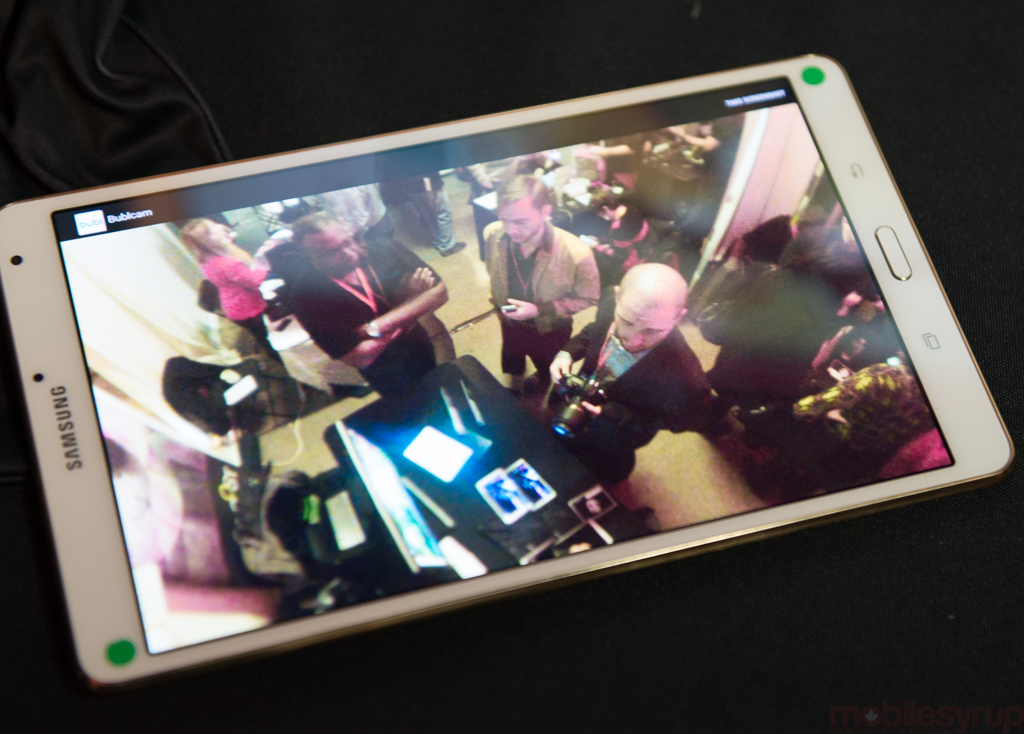 Do you think that technologies at the software level to manipulate digital capturing will develop faster than those it takes to create compelling 3D environments from scratch? It kind of reminds me of Instagram’s Hyperlapse app – if you give them the raw digital information, they can build algorithms to do different things with it.

Interestingly enough, it’s really hard to create a perfect stitch [from the Bubl camera’s multiple lenses]. We struggle with that all the time. We’re not perfect, and we don’t expect to be perfect for a long time. We’re working on the calibration right now, but the calibration required to make a Google photo sphere to create street view is a very time consuming thing, and even when you look at it, you can see some of the stitching – and we’re talking about Google! Google is also one of our partners, so we know how hard this is to do.

Now is that difficult on the hardware side or the software side?

Software side. In fact, Bubl is more of a software company than a hardware company. We were actually building the software because we wanted to create content – there was just no hardware in the space that was just really affordable, so we made it ourselves. Because of that, we still today know that the software portion is something that’s going to take time to develop.

There was discussion on the panel about the ‘3D uncanny valley’, and it seems to be this tradeoff between resolution and frame rate – essentially information density and the speed at which it runs.

That’s not necessarily the case for everything. Our camera produces a 1080p @15fps video, and a 720p video @30fps. But, there are companies that use GoPro rigs that create 1080p video @30fps, or even 60fps at times. And that video, even on an Oculus or Samsung Gear VR, is still not quite perfect – your body and your eyes still notice the differentiation between the content. Until we can get it to a place where the software helps, your mind and body are going to have trouble making sense of the reality they see in front of their eyes.

Is that where the education part comes in? Like, people went to see the new Hobbit movies and thought ‘this is weird’ but didn’t really know that the doubling of the frame rate was intention and supposedly better. Do you think that those experiences will naturalize?

I think if it becomes a standard, people will accept it quite a bit better. But I’m realizing also that the 2D content we’re creating right now is so much easier for people to accept, because it’s actually just natural video. The 3D environments that people are creating, those naturally run at a higher frame rate, in an environment that already doesn’t look real all the time. It’s really hard to for people to consume that content.

To compute it almost. They have to internalize it.

That’s very true. When you think about the Hobbit at 45fps, it wasn’t necessarily an issue with the real world environments, it was an issue with the the digital representation of content at that frame rate. And that really confuses people because you’re looking at something that’s not real at a speed that’s not natural.

So I know you’re opening up APIs to allow developers to build software to use the Bubl camera in exciting ways, but day-one, why will be buying your camera?

We polled our Kickstarter backers and found that 56% of our backers wanted it for personal use: weddings, travel, birthday parties. They wanna recreate these really special moments and share them with everyone. And when we heard that we thought, ‘of course, that’s exactly right.’

The other people wanted to use it for professional use cases. Real estate is a huge play. We’ve seen a lot of VR in real estate already, but people want to change the work-flow for that so it’s really time consuming to do. You have to take a lot of pictures, you have to stitch them together and it takes forever.

VR or virtual touring as a whole, whether its real estate or something else like construction, we’ve changed the cost and ease of use for that. So we’re expecting to see adoption very quickly.