Hands-on with Pebble OS 2.0 and the Pebble appstore 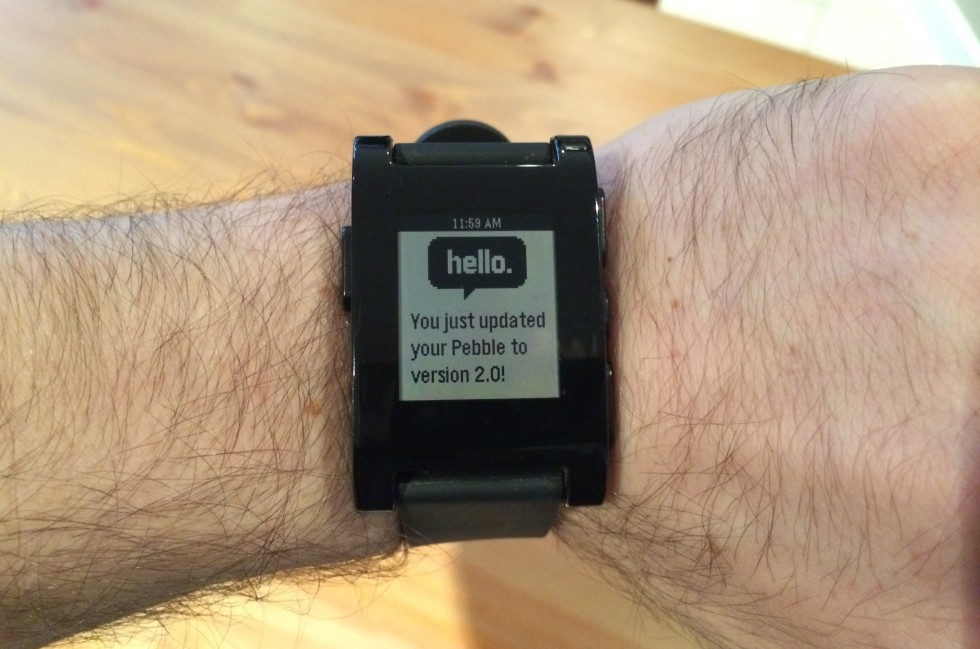 Pebble OS 2.0 coincides with app support, but brings a few new useful features as well, including a section dedicated to archived notifications, one of the areas that seriously lacked in the early versions of the software.

Indeed, Pebble 2.0 is about making the Pebble smartwatch, and brand, more attractive to a populace weened on one-touch app downloads. Alongside new Android and iOS apps (we only got to play with the iPhone version), which makes pairing a new or existing Pebble smartwatch much easier, the appstore is broken into two parts: a portal for apps and watchfaces. 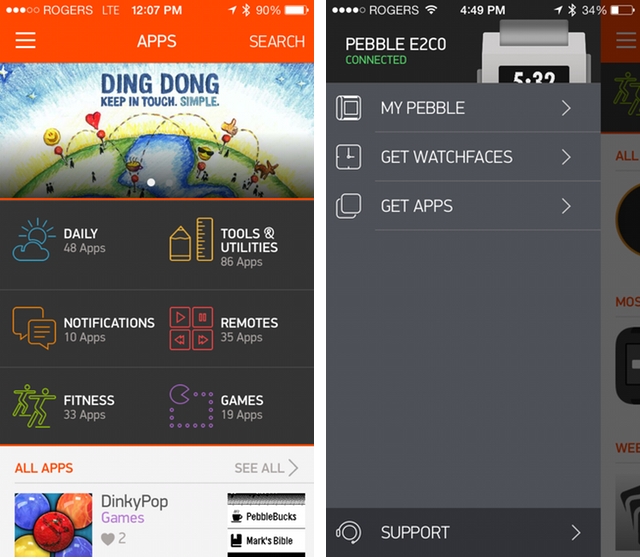 At launch there are around 1,000 apps, ranging from dedicated Twitter programs written in Javascript to collaborations with well-known startups like Foursquare, ESPN, Yelp and GoPro. We got to try a handful of these — the new iPhone app makes it incredibly easy to choose programs and watchfaces to load into the eight-slot Pebble memory, or to load into a “queue” for later — and while they’re mainly extremely paired-down versions of their mobile counterparts, their beauty is in such simplicity. 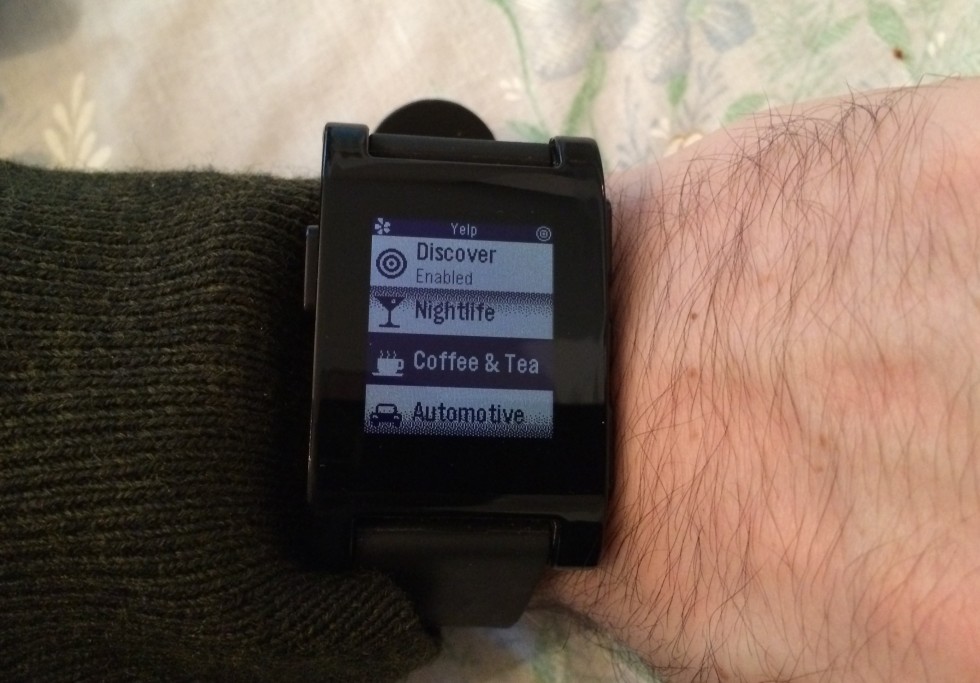 For example, the Yelp app, which is clumsily accessed from the main Settings menu — Pebble, like it did for a notifications section, needs to include a dedicated app section in a future firmware update — shows the nearest restaurants, coffee shops, auto repair locations and more, showing the most relevant content immediately: phone number, address and, with a press of the centre button, reviews.

Speaking of that centre button, though we didn’t get a chance to test the new Pebble Steel, the original’s mushy plastic buttons makes navigating through these apps quite frustrating. We had similar issues relying on gestures for the Galaxy Gear, but clearly touchscreen smartwatches are the future, and Pebble’s next iteration will need to follow suit if it wants to stay competitive.

Prior to app integration, it wasn’t necessary to squish these buttons all the time, since you were merely receiving and dismissing notifications or occasionally changing watchfaces. But now, if you want to check in on Foursquare, you have to enter the Settings menu by pressing the middle button, navigating down using the bottom right button, tapping the middle button, navigating using the top or bottom buttons, etc., etc. It would all be much faster on a touchscreen, though the display itself would need to be slightly bigger to accommodate accurate gestures. 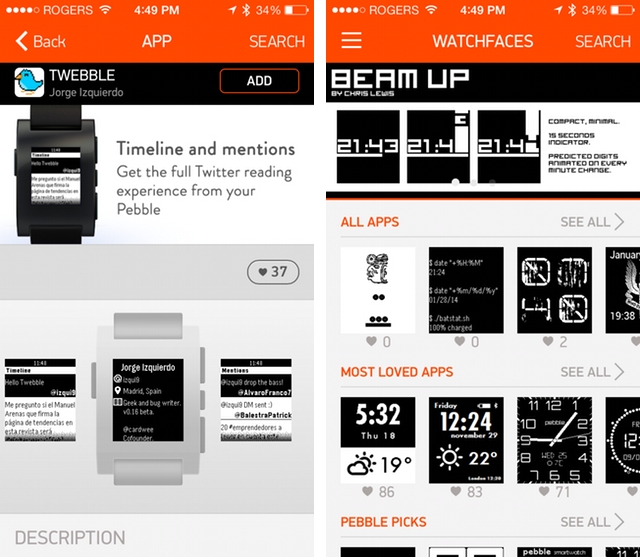 As it stands, the appstore is wonderfully presented, and the early examples of well-made versions of their smartphone counterparts waste no space and add nothing superfluous. The ESPN app, for example, displays scores and nothing more; the Foursquare app focuses exclusively on checking in, a feature that the company has been downplaying in its most recent smartphone apps.

Pebble’s appstore is where we were in 2008 at the beginning of the iOS and Android app store revolution, and is the first glimpse, for me anyway, at a future where smartwatches will work with smartphones without relying on them. 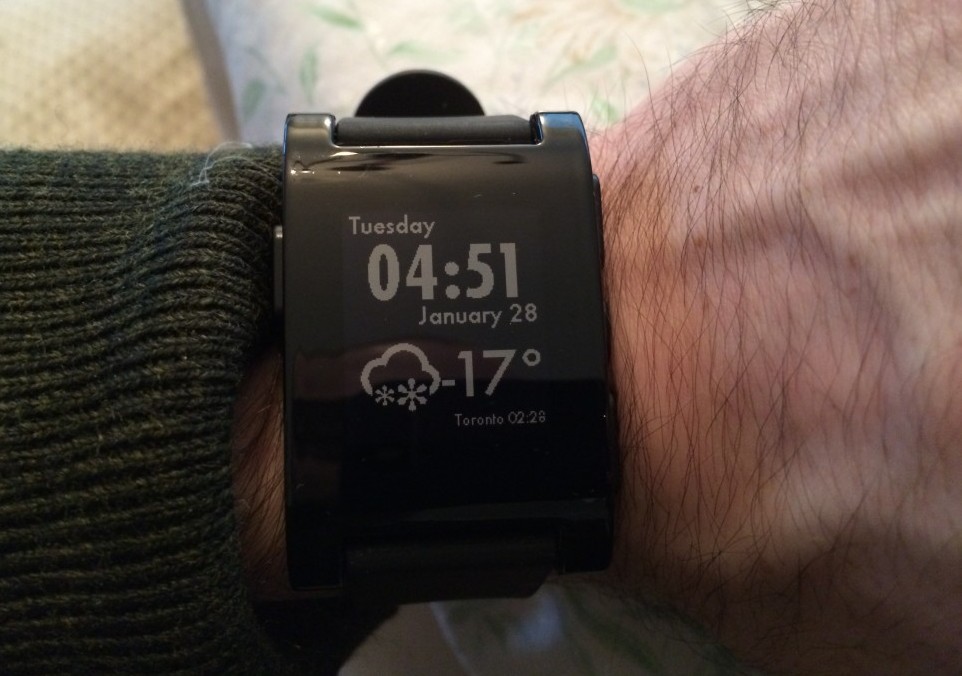 Some of the new watchfaces add functionality, like up-to-date weather stats, that were only previously possible by installing third-party apps on your smartphone. The new watchface section of the Pebble app goes a long way to ensure that great designs and new features will actually be seen by Pebble users, not just the enthusiasts willing to scroll through pages of forum posts for just the right one.

Whereas there are 1,000 apps in the store, there are thousands of great watchfaces, and they will only get better as developers take to the Pebble SDK 2.0. 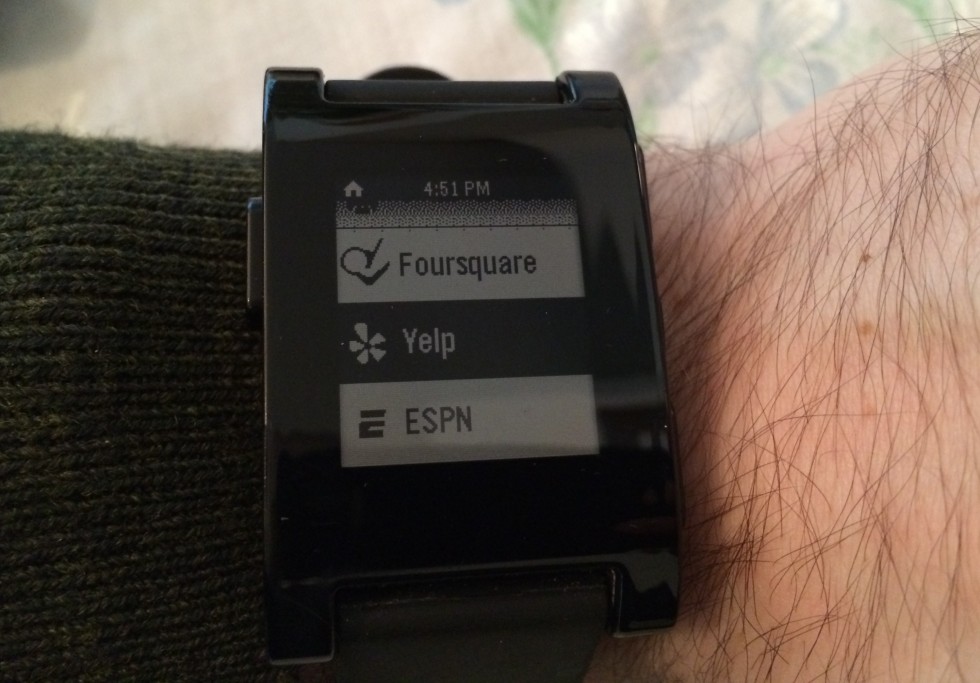 Similarly, the apps themselves are going to improve. Many of them merely emulate notifications that you’d receive on an Android or iOS app, but some use the accelerometer on the phone to take the onus off using a smartphone.

For example, a popular sleep tracking app for Android, Sleep as Android, which relies on you cuddling with your phone in order to determine quality of sleep, has a Pebble app that does the same thing and passes along the data to your device for later perusal. It’s these types of applications that are going to make me a smartwatch believer.