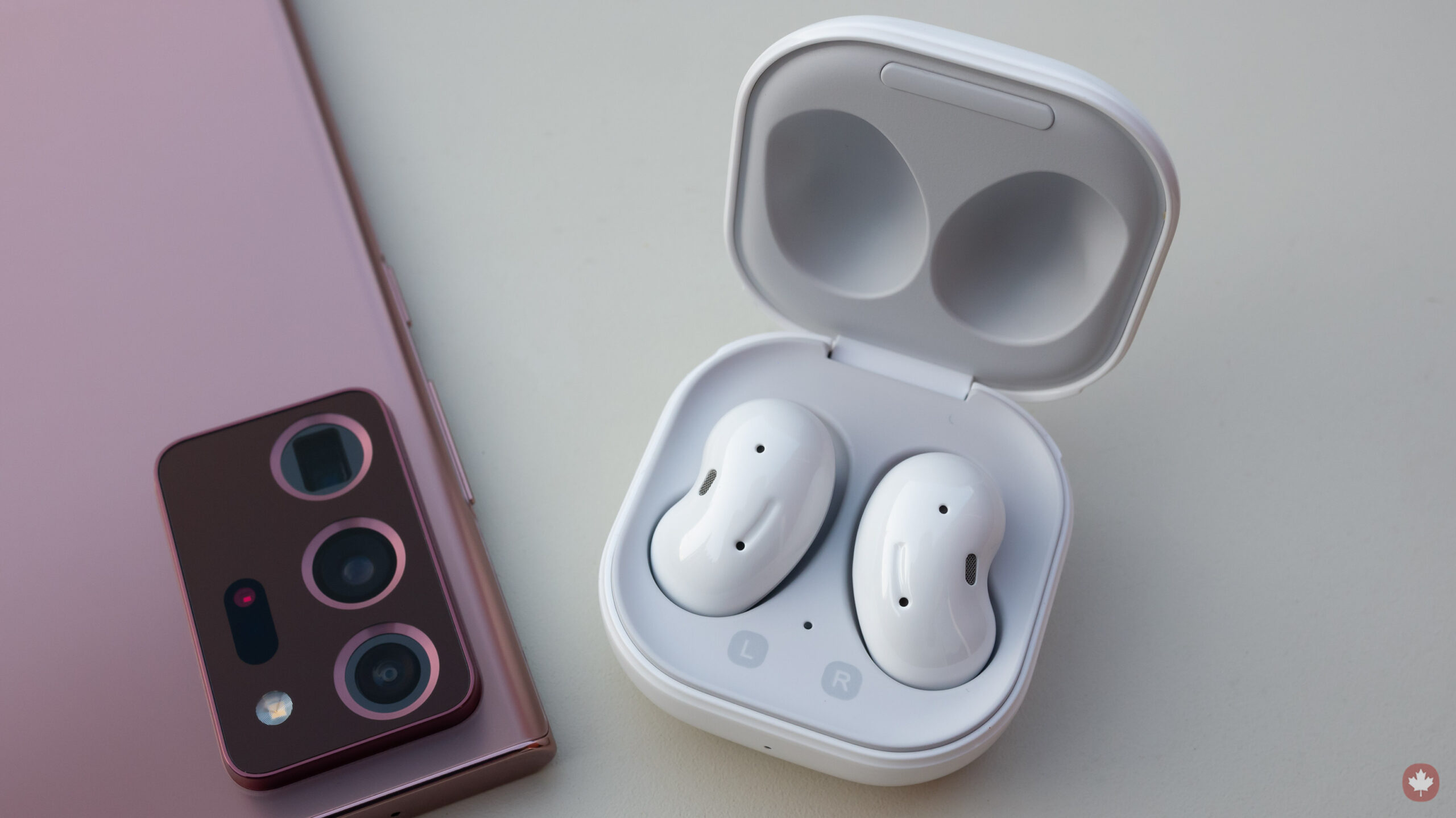 If you told me five years ago that a significant part of my job would eventually involve reviewing wireless earbuds, I probably wouldn’t believe you.

Nevertheless, over the past few years, I’ve used several different wireless earbuds, including Apple’s AirPods and AirPods Pro, Samsung’s Galaxy Buds and most recently, Google’s second-generation Pixel Buds. While I appreciate the freedom cordless earbuds offer, I’ve yet to encounter a pair that is comfortable to wear for the majority of the day. This is where Samsung’s new Galaxy Buds Live come in. While they clearly really should have been called ‘The Beans,’ they’re still the most interesting wireless earbuds currently available for several reasons. 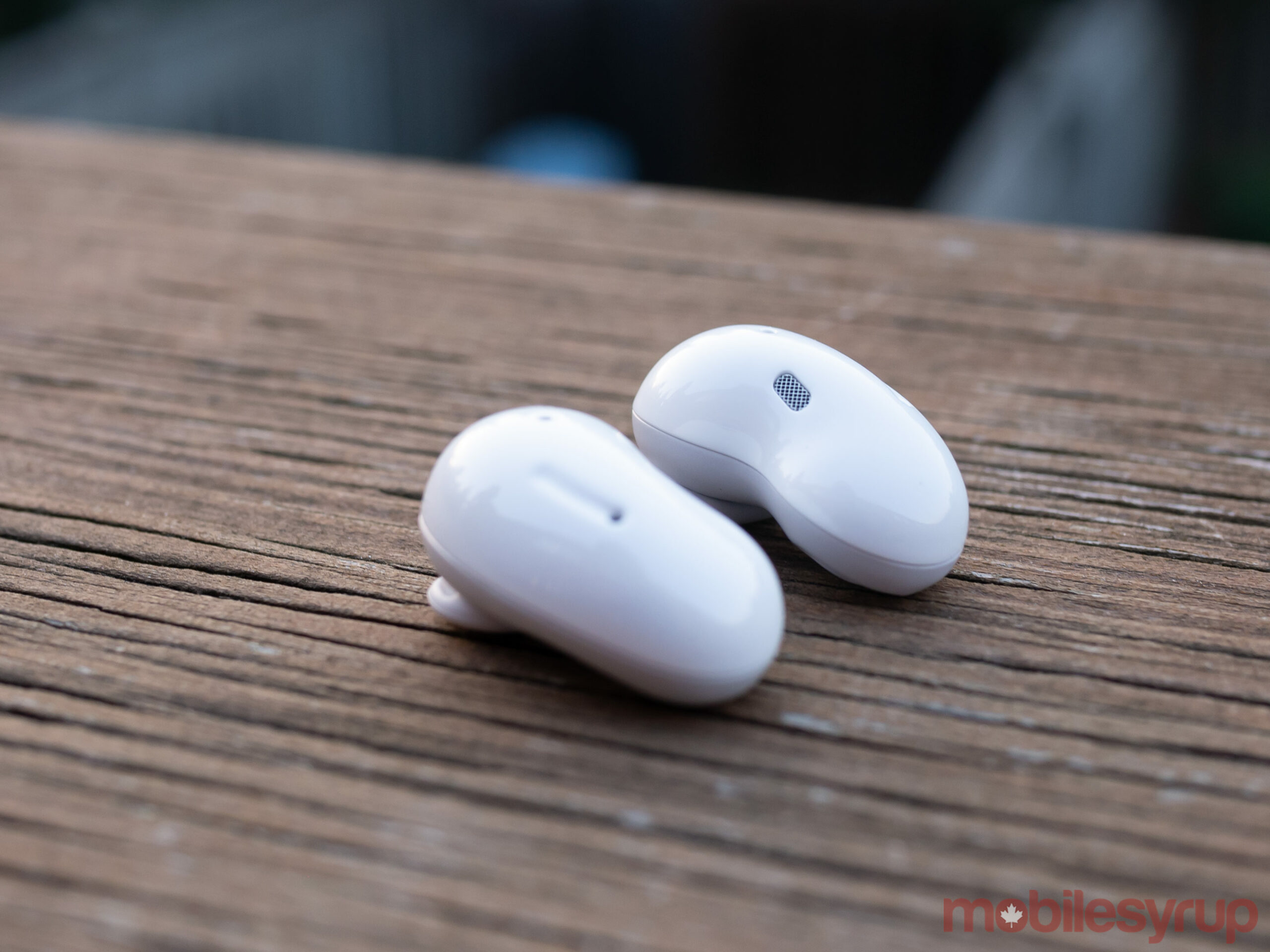 First off, instead of burrowing into your ears like most in-ear earbuds, the beans sit in the outer-ear similar to Apple’s standard AirPods, and are secured at a slight angle by the upper ridges of your ear. They also still manage to feature high-end wireless earbud features like active noise-cancelling (ANC) and equalizer functionality.

Most importantly, they’re the most comfortable wireless earbuds I’ve ever worn. Sometimes I actually forget I have them in my ears, which isn’t something I’ve been able to say about other wireless earbuds.

However, the main question surrounding the Buds Live is whether their unique design allows ANC to work as well as Samsung claims. Unfortunately, that hasn’t been the case in my experience. Still, the Galaxy Buds Live offer several redeemable features that set them apart from other wireless earbuds, as well as an emphasis on comfort that I really appreciate. 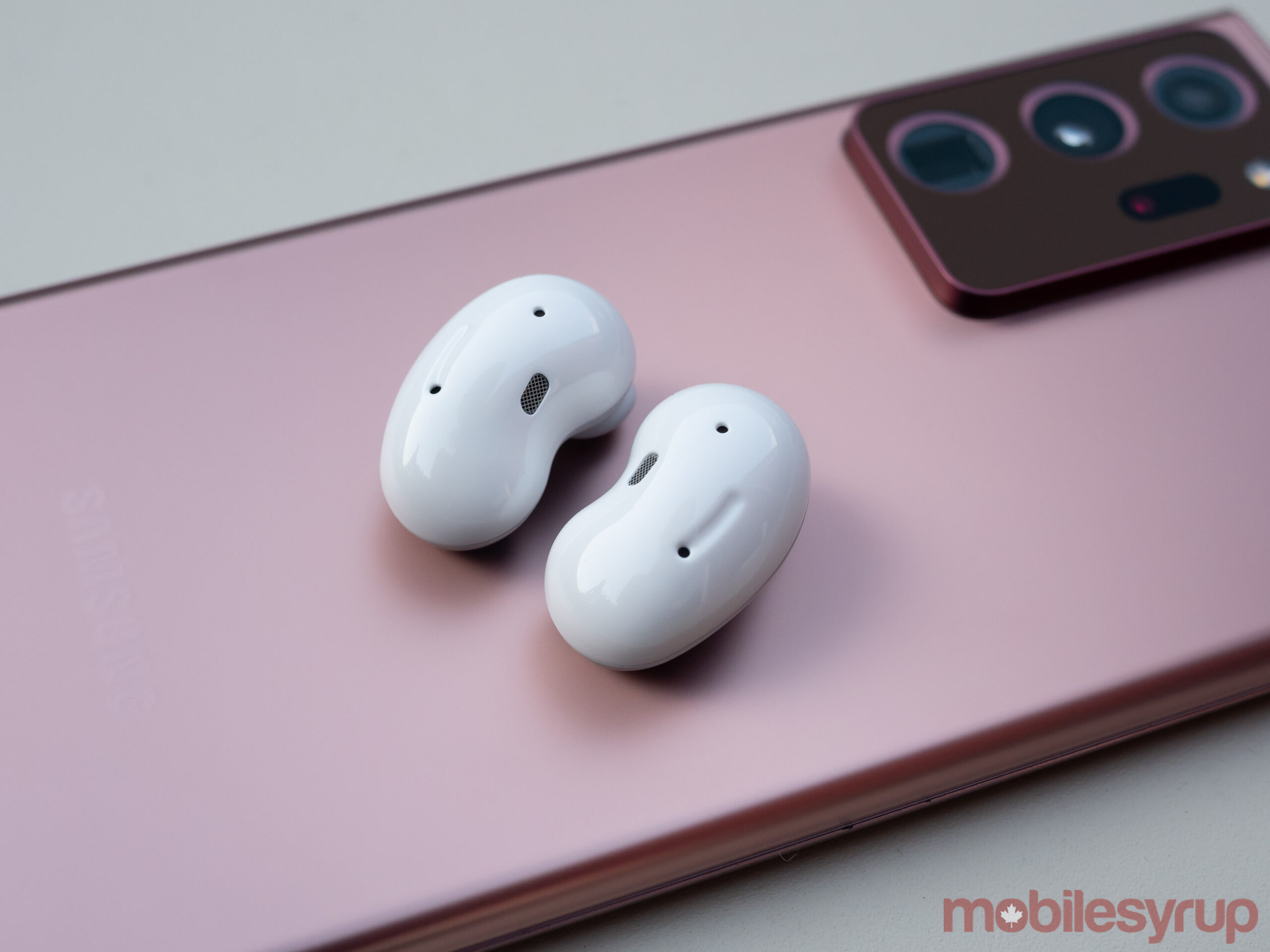 There’s no getting around the fact that the Buds Live look incredibly weird. They’re shiny, bean-shaped and almost seem like they won’t fit in your ears properly when you first hold them in your hand.

There’s a small rectangular fin at the top of the buds that locks the Buds in place in by nudging under your ears’ upper ridge. I found the standard tip worked for me, but Samsung thankfully includes additional sizes in the box for those with smaller or larger ears. For example, my partner needed to use the larger tip for the Galaxy Buds Live to fit in her ears.

The Buds Live’s speakers are located on the bottom of each earbud, which makes it difficult to tell what bean goes in which ear. It took me a day or so to get the hang of sliding the buds in my ears correctly, but I eventually got used to it. A quick tip is to give them a bit of a twist as soon as you put them in your ears to keep them in place better. I basically learned that the curved part of the bean needs always to be facing towards the back of my head for them to fit correctly. 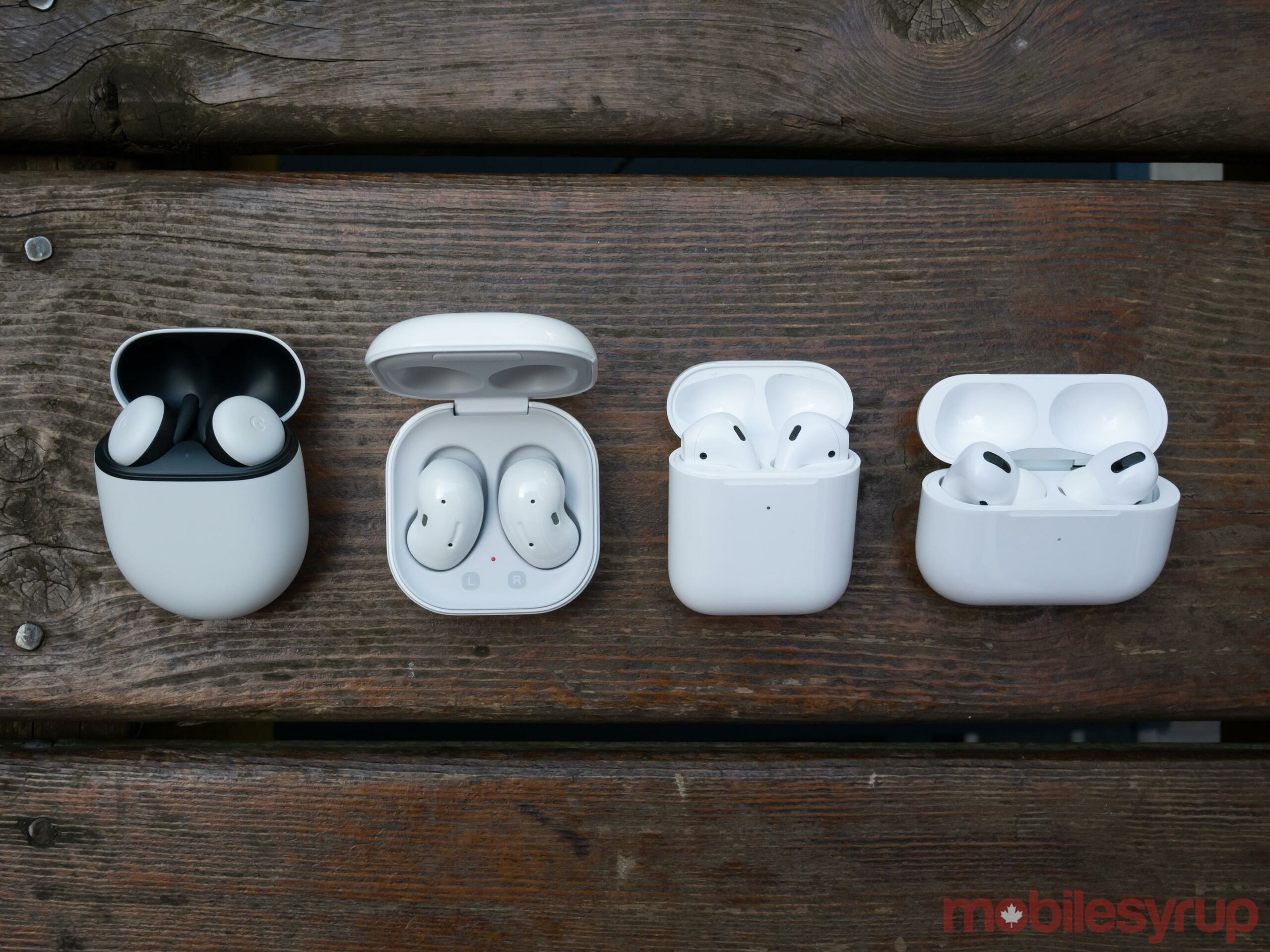 I’ve worn the Buds Live for more than 12 hours a day in some cases and haven’t experienced any discomfort. This is something I haven’t been able to say about in-ear buds like the AirPods Pro or even Google’s recent Pixel Buds (2020), which, until I tried the Buds Live, were the most comfortable wireless earbuds I’ve ever used. In fact, I haven’t used over-ear headphones that remain comfortable for that long either. Though some people might not be fond of the way the Buds Live sit in their ears because it isn’t entirely as secure as in-ear earbuds, I prefer this somewhat out-there design and commend Samsung for trying something different.

And while this might sound a little gross, the design also ensures the earbuds don’t get covered in earwax like other wireless earbuds.

The Galaxy Buds Live have a surprising amount of heft to them — though they don’t feel heavy in your ears — which helps make the earbuds feel well-made and high-quality. The Buds Live’s wireless charging case is as equally impressive. It’s a little more plasticy, and feels light and hollow when compared to the AirPods’ and Pixel Buds’ comparatively much more solid-feeling cases. The rear of the case features a USB-C port, and the enclosure is also Qi wireless charging compatible. 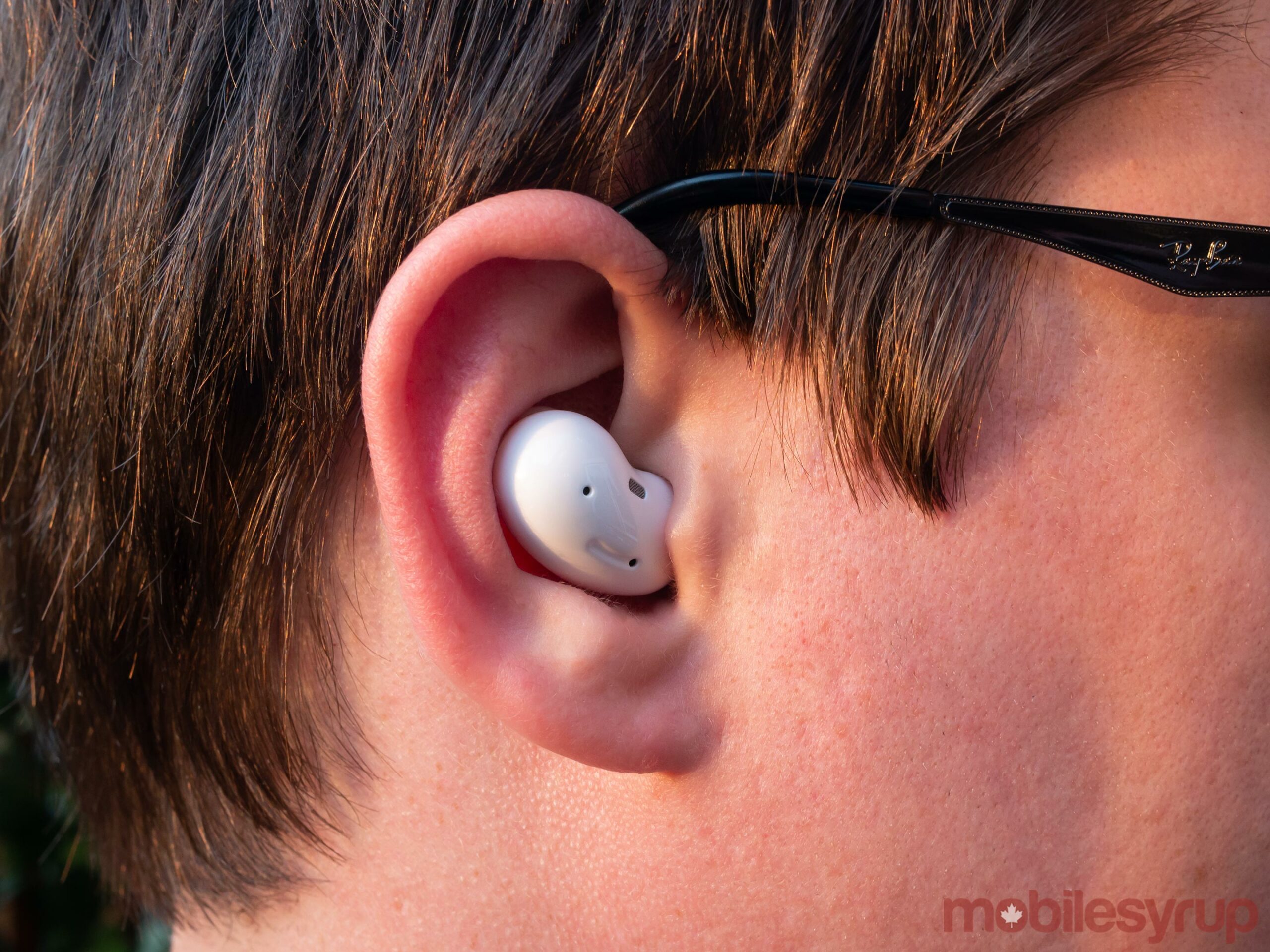 Similar to getting the oddly shaped Galaxy Buds Live in my ears, I also found it difficult to slot the earbuds back in their charging case at first. As soon as I figured out the charging contact in each Bud is located inside the rubber tip, dropping the Buds Live in their case became a simple, intuitive process. Still, it’s worth mentioning that the process of getting the earbuds in their case isn’t as simple as the AirPods Pro or AirPods.

Regarding colours, the Galaxy Buds Live are available in ‘Mystic Bronze,’ ‘Mystic White,’ and ‘Mystic Black.’ The white earbuds are the most understated and the colour Samsung sent me to review, but all three hues have an eye-catching gloss to them that some might not be fond of. That said, since the earbuds don’t stick out of your ears, they’re a little more low-profile than other earbuds. 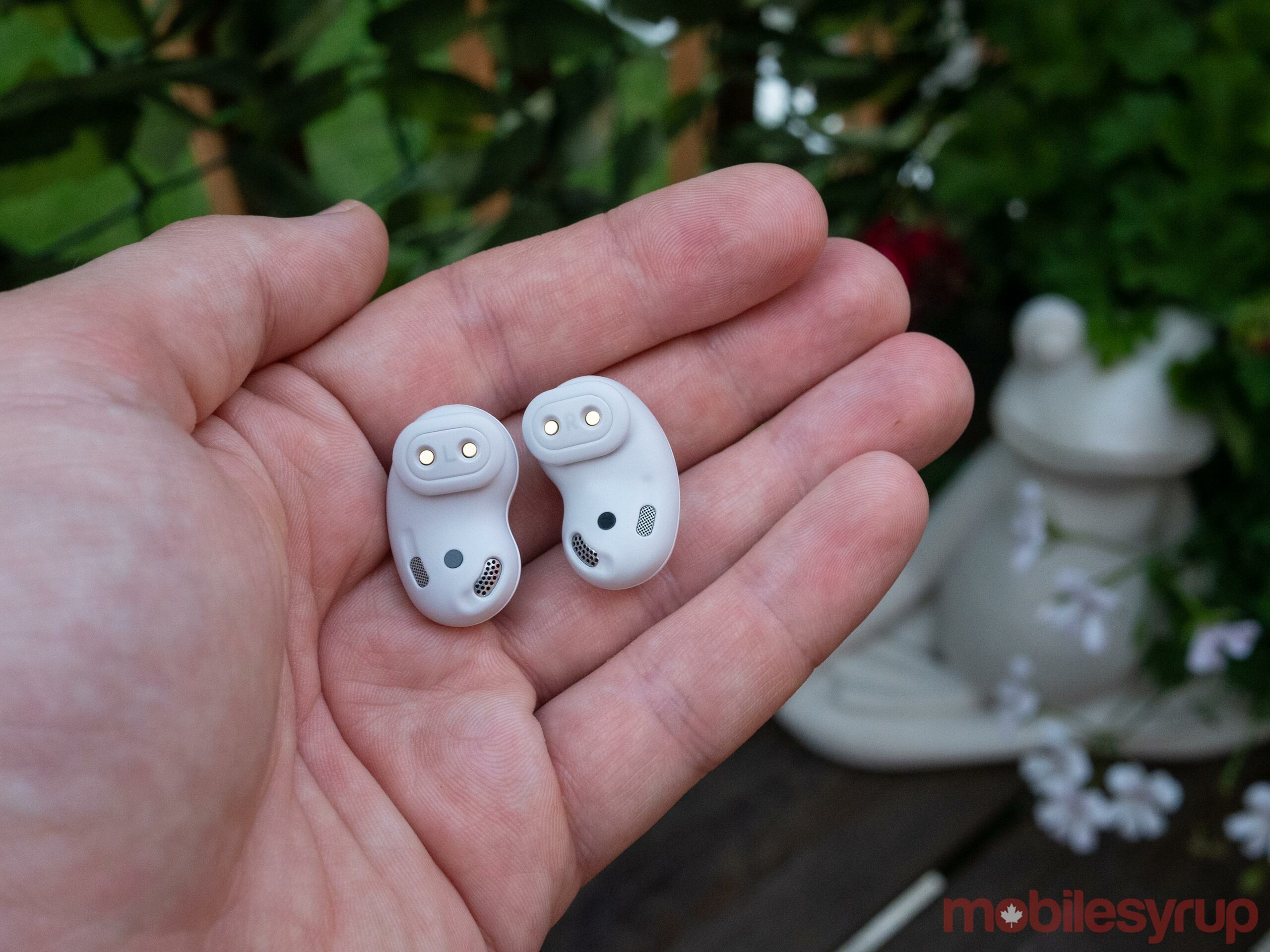 If you’re looking for wireless earbuds capable of rivalling the sound quality featured in over-ear headphones, these aren’t the ones you’re after.

With that said, the Galaxy Buds Live easily surpass the AirPods in the sound quality department and in fact, even sound slightly better than the Pixel Buds (2020). I wouldn’t go so far as to say they feature sound as good as the AirPods Pro, but the quality they offer is pretty close.

Everything from Taylor Swift’s new album ‘Folklore,’ to guitar riff-filled tracks like Oakville, Ontario-based pop-punk band Seaway’s ‘Big Vibe,’ features an impressively broad soundscape with an emphasis on highs thanks to the Buds Live’s 12-millimeter drivers. There’s even a fair amount of bass featured in the wireless earbuds as long as you have them secured tightly in your ears, though the AirPods Pro have the Buds Live bested in this department. You can increase the bass a bit through the earbuds’ EQ, however, similar to the Pixel Buds (2020) following a recent update. 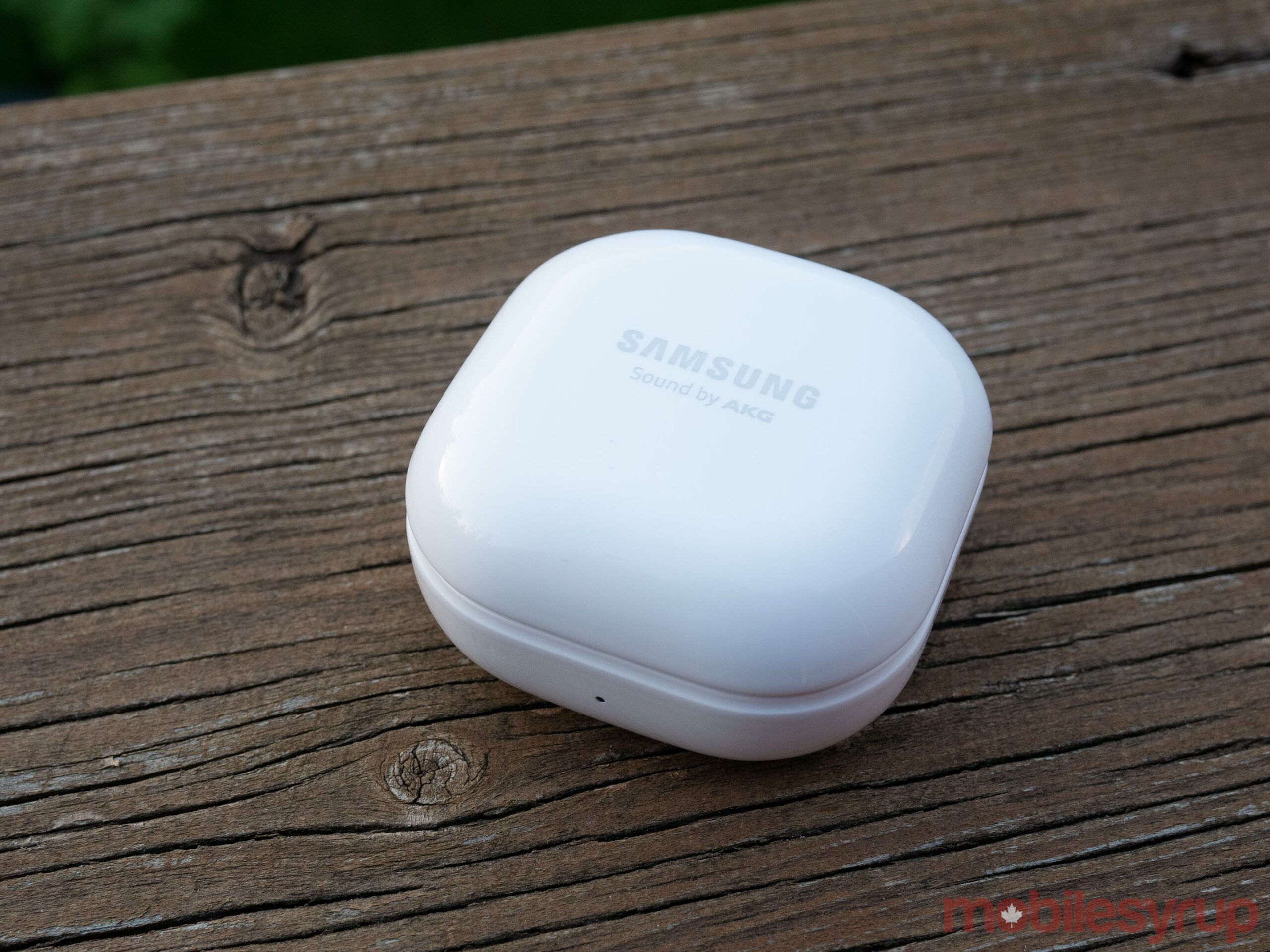 Just like other earbuds, including the Pixel Buds and AirPods Pro, the Galaxy Buds Live feature a ventilated design that prevents the underwater, air-blocking feeling some people experience with noise-cancelling earbuds. This also seems to help the Buds Live offer a wider sound stage.

This is, in part, is likely because the Galaxy Buds Live don’t actually go inside the wearer’s ear canal, and instead, sit on the outside. This makes cutting off the sound from the outside world a much more difficult task. 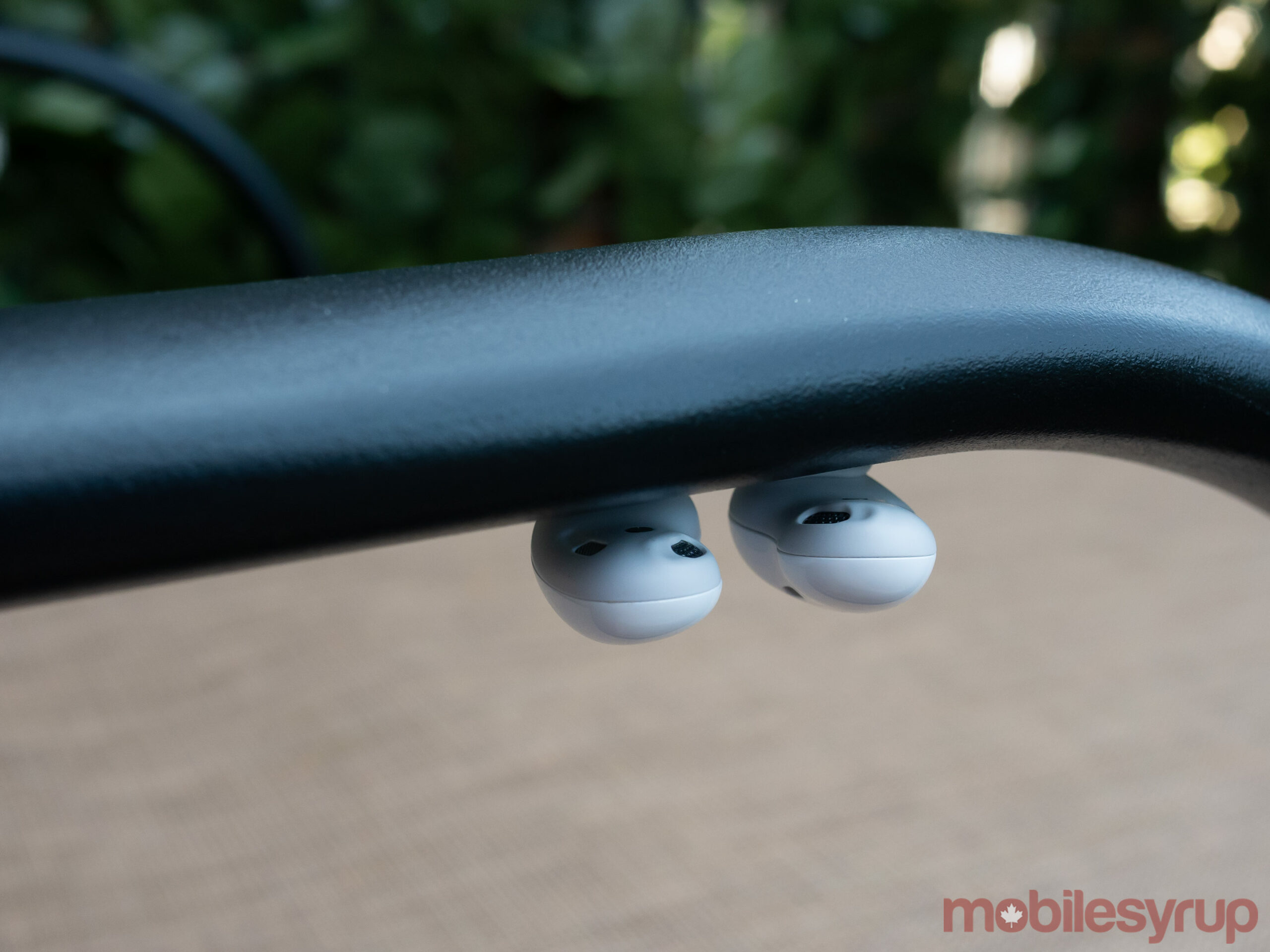 One of the things that surprised me the most about the Galaxy Buds Live is how easy it is to connect them to different devices. While Apple’s AirPods are designed to be used with Apple devices and, in turn, work best with the tech giant’s products, they can still be connected to Android devices and PCs, though the process is a bit of a hassle.

Even Google’s Pixel Buds (2020) aren’t great when it comes to connecting them to different devices. For example, if you want to connect Google’s earbuds to an Apple device, you won’t be able to access specific settings until you reconnect them to an Android device.

With the Galaxy Buds Live, that’s not an issue since Samsung offers a mobile app on both Android and iOS, allowing you to easily turn ANC on and off, shift touch controls, play around with the EQ and even download updates. Given several of Samsung’s accessories were once locked to only working with its own devices several years ago, this is a refreshing change of pace for the company. 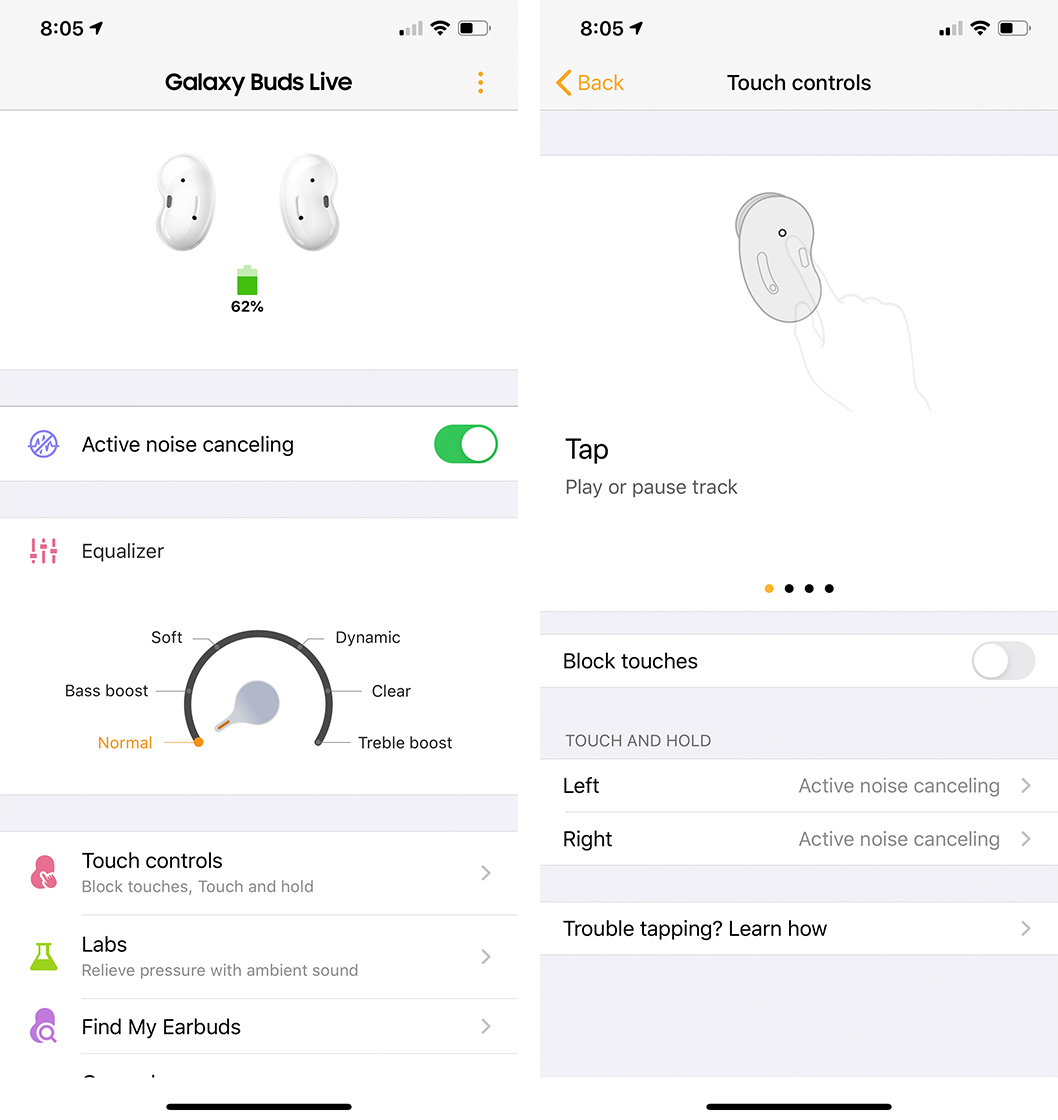 Speaking of Equalizer features, unlike Apple’s AirPods — including even the AirPods Pro — you can shift the Buds Live between ‘Soft,’ ‘Bass boost,’ ‘Dynamic,’ ‘Clear,’ ‘Treble Boost,’ and finally normal, which is the setting I typically used.

While switching between devices generally works great and is a simple, one-click process, it can also occasionally get messy. In one situation, I was trying to shift from using the Galaxy Buds Live with my Note 20 Ultra to connecting them to my MacBook Pro (2020). Regardless of what I tried, the Buds Live just continuously reconnected to the Note 20.

I was forced to turn off the smartphone’s Bluetooth to get them to connect to my MacBook Pro. Coupled with the lack of sync button on the earbuds’ case, you need to leave it open with the earbuds inside to connect to a new device, which doesn’t help matters. 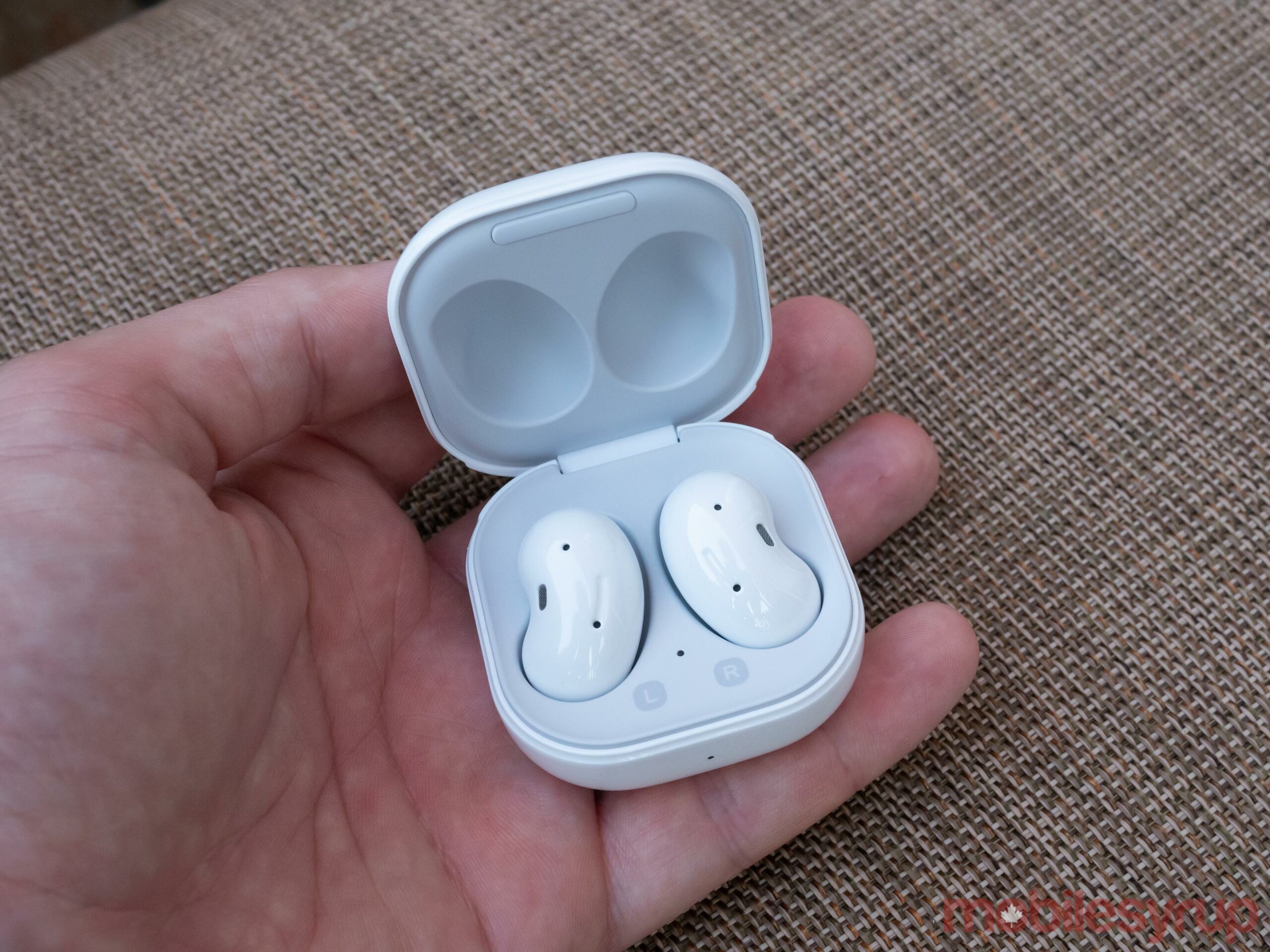 There are a few other things worth noting about the Galaxy Buds Live. First, while they offer decent Bluetooth range, it isn’t quite as far as what I’ve experienced with other wireless earbuds. For example, when I have the AirPods Pro connected to my MacBook Pro, I can walk all the way downstairs and into my backyard before I start to experience signal drops.

With the Buds Live, sound starts to get garbled in my main floor kitchen. However, given most people are likely going to use these earbuds nearby their smartphone or laptop, this isn’t a significant issue.

While the Buds Live are generally my favourite earbuds out of all that I’ve tried, the beans’ battery life is middling, similar to other competing wireless earbuds that feature active noise-cancellation.

I found that in my experience, battery life comes in at somewhere between four and six hours depending on what device they’re connected to. This is slightly under the roughly six to seven hours of battery life I experience with the AirPods Pro and Pixel Buds. As expected, turning off ANC extends the battery life to about seven or eight hours, which is something I actually found myself doing sometimes since the Buds Live’s active noise-cancelling doesn’t work that well anyway. With the earbuds’ case, you’ll get about 29 hours total of battery life. 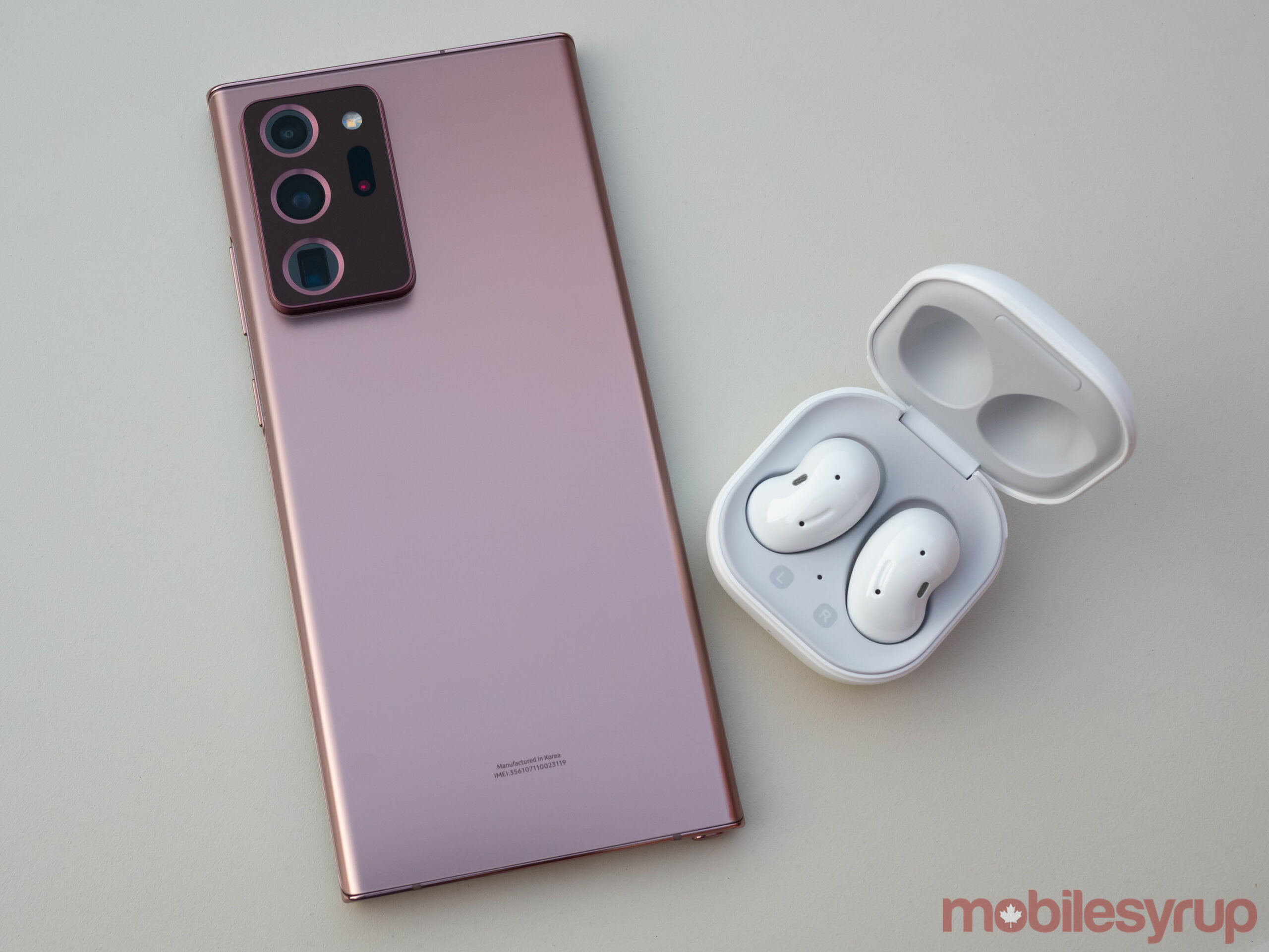 Unlike other earbuds I’ve used, it’s far too easy to accidentally tap the Galaxy Buds Live and skip tracks or deactivate noise-cancellation. The earbuds are extremely sensitive to the slightest touch, and I found that even when shifting them in my ears slightly, I’d end up pausing music or replaying songs.

While the Galaxy Buds Live feature three beamforming mics, including two on the outside and one on the inside, I didn’t find that voice calls and Google Hangouts audio quality was particularly impressive. The audio isn’t bad at all, but the quality also isn’t better than what I’ve experienced with other wireless earbuds.

It’s also worth noting the Buds Live are only IPX2 water and dust resistant, which doesn’t match the same durability as earbuds in this price range from other manufacturers. This means if you sweat a lot when working out at the gym, these might not be the earbuds for you. Given the Galaxy Buds Live don’t really fit that securely in most people’s ears to begin with, they likely aren’t the best wireless earbuds for those interested in using them at the gym.

Finally, while Bixby is the default voice assistant, you can easily change this in Samsung’s Galaxy Fit app.

Update 09/09/2020: The latest update to the Galaxy Buds fixed all of the connectivity issues I initially experienced when switching between devices.

For me, the Galaxy Buds Live are the perfect wireless earbuds. They sound great, are comfortable and fit snugly enough in my ears for how I use them.

It's disappointing that active noise-cancellation isn't quite as effective as I hoped, but the feature still helps block out minor background noise.

The fact that Samsung's new earbuds only cost $249 compared to the AirPods Pro's $329 price tag, is also a worth noting, especially given it's easier to use the Galaxy Buds Live with more devices when compared to Apple's high-end earbuds.

Of all the wireless earbuds I've used over the last few years, the Buds Live are my favourite by a slim margin. The Galaxy Buds Live feature excellent sound quality, reasonably strong bass and most importantly for me, are incredibly comfortable.

"The Galaxy Buds Live feature excellent sound quality, reasonably strong bass and most importantly for me, are incredibly comfortable"