The Butterfly keyboard is dead 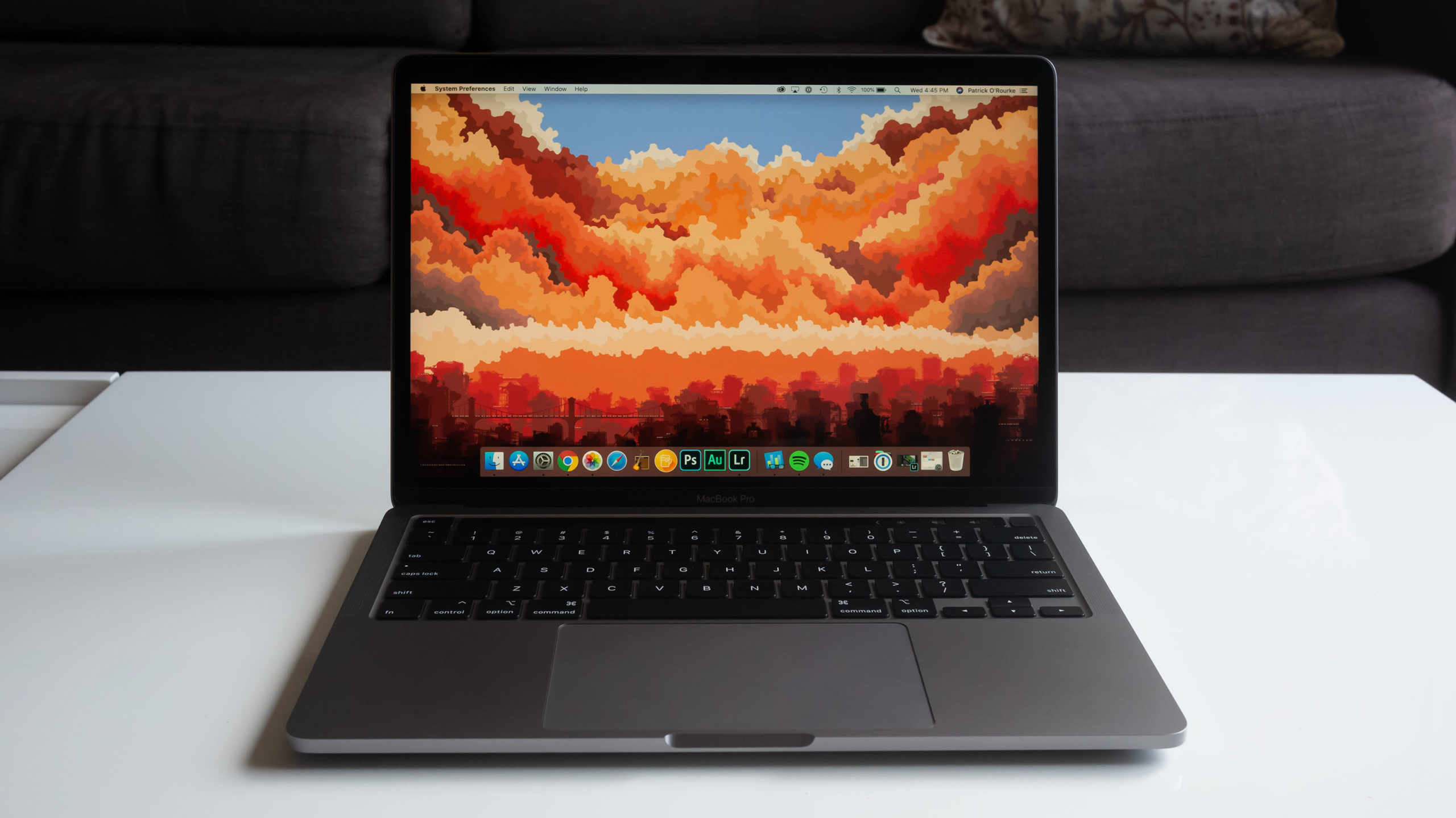 There’s nothing particularly exciting about Apple’s new MacBook Pro (2020), but in a sense, that’s okay.

It features the same design the company has used for its “pro” tier MacBook since 2016. To the dismay of some, the laptop doesn’t include minimized bezels or improved speakers like the 16-inch MacBook Pro released last year, contrary to persistent rumours swirling for the last few months. 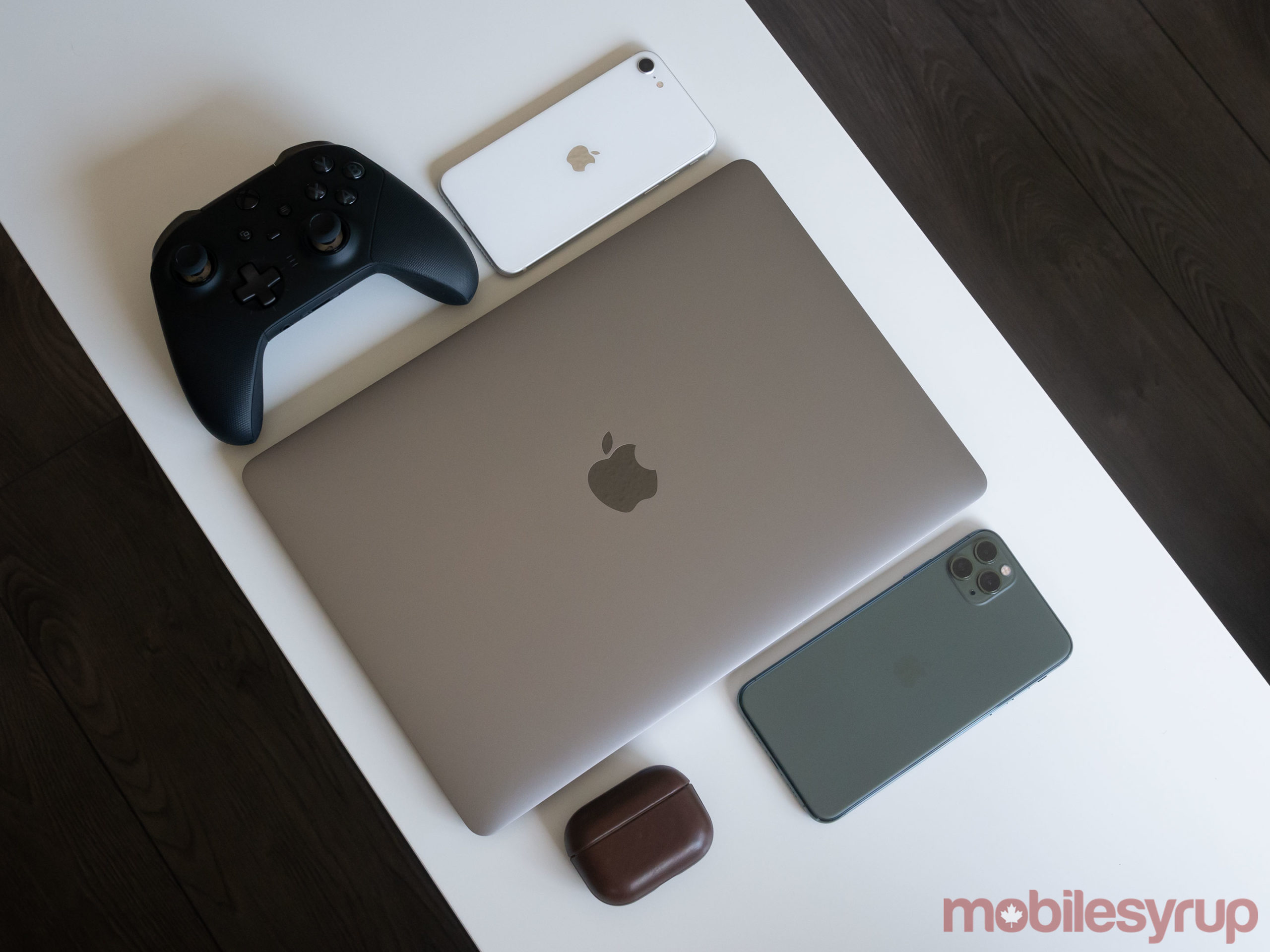 Whether plans for a slightly tweaked 13-inch MacBook Pro design were put on hold because of the ongoing COVID-19 pandemic, the rumours were entirely wrong, or that revision is still coming at some point, the 2020 MacBook Pro 13-inch is the laptop Apple needed to release right now.

The new 13-inch MacBook Pro is precisely what I want from an Apple laptop. It features a worthwhile hardware upgrade — as long as you opt for the more expensive 10th Gen Intel models (more on this later) — and Apple’s excellent new Magic keyboard instead of the beleaguered Butterfly key mechanism that has been plaguing the tech giant’s laptop line for years. 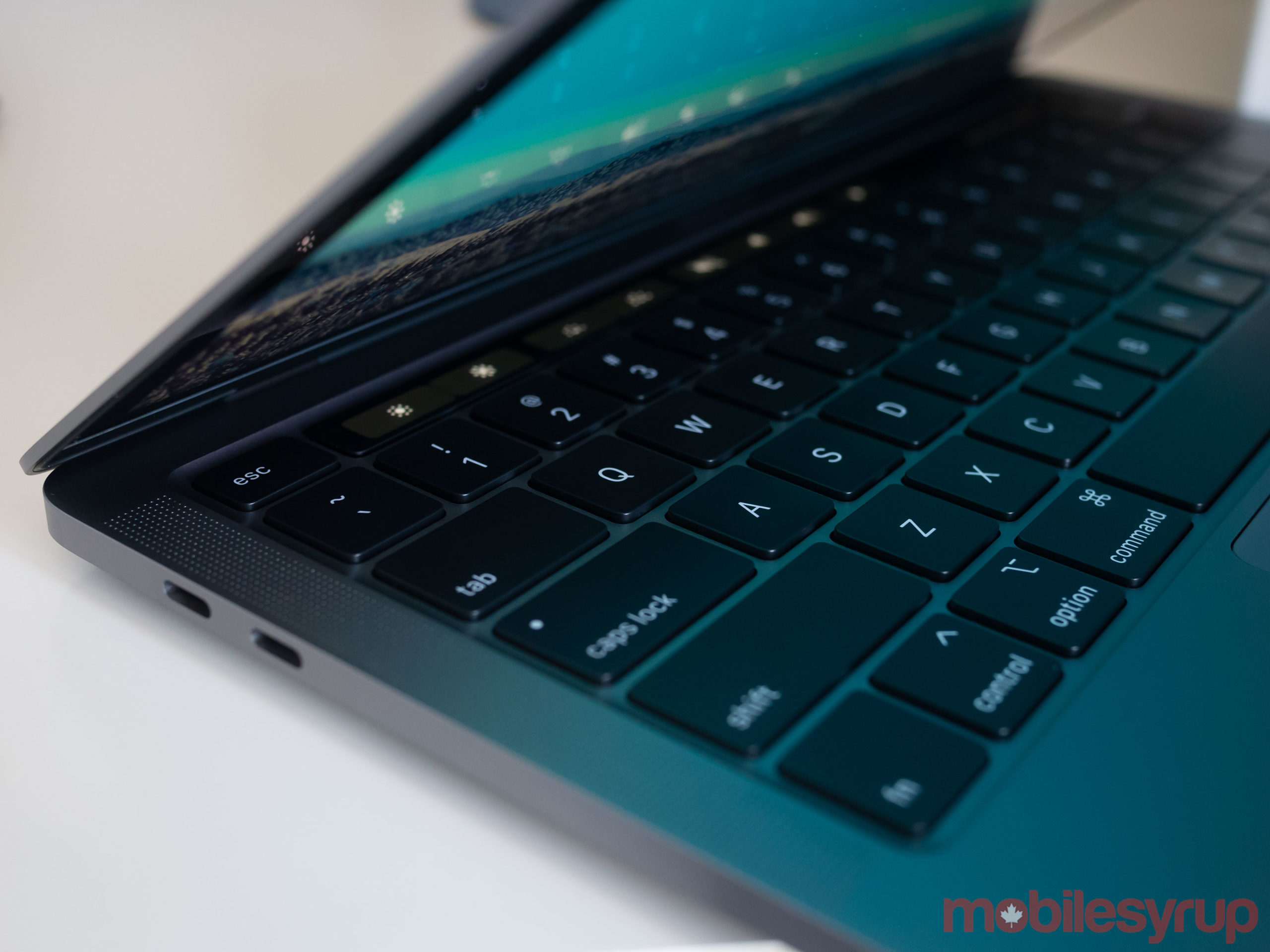 But it’s also simultaneously disappointing as far as the lower-end 8th-Gen Intel chip configuration is concerned. With this hardware, the upgrade from its 2019 predecessor that also features an 8th-Gen Intel chip, just isn’t worthwhile.

The Magic keyboard is stellar 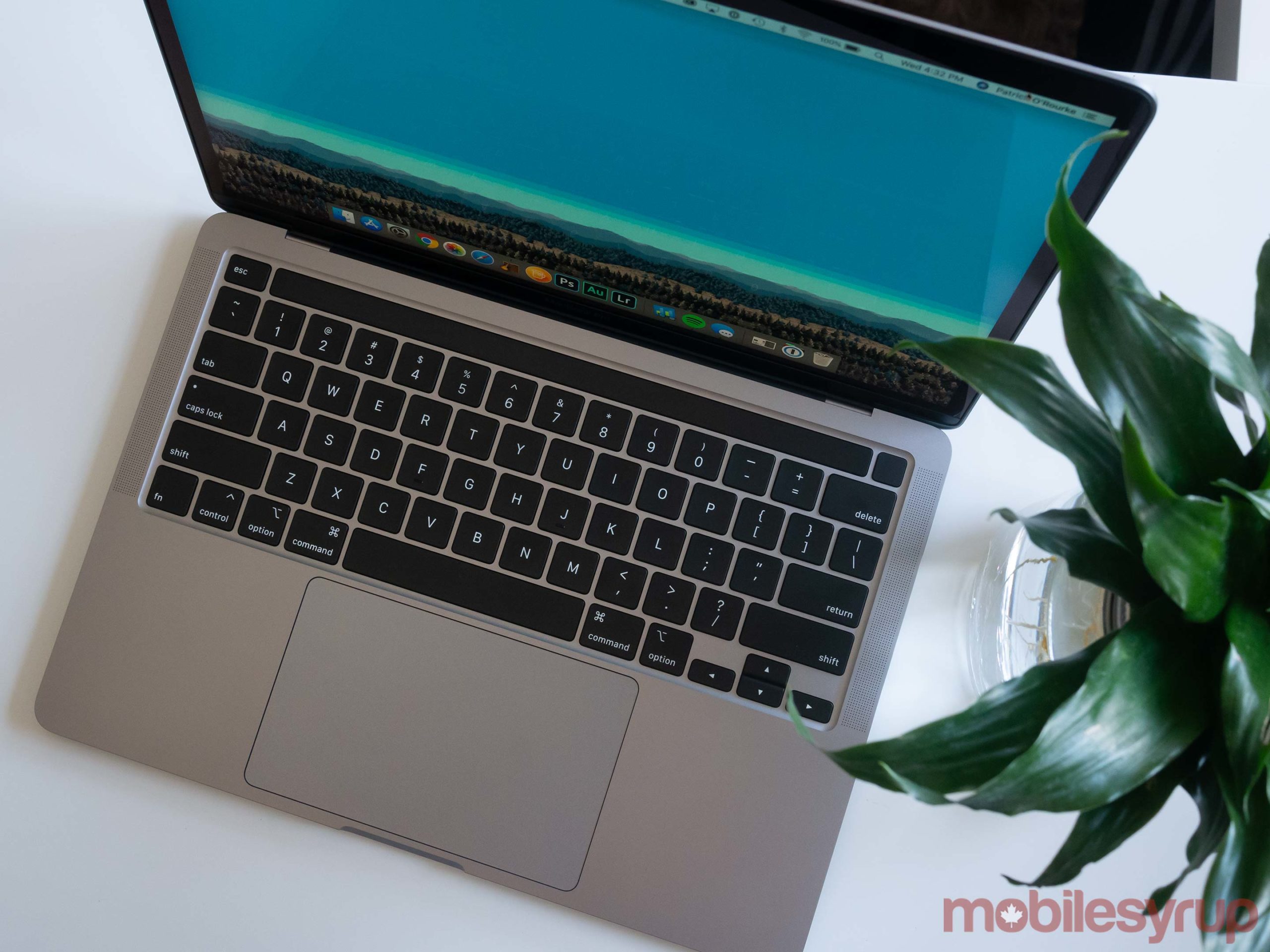 While some feel like the MacBook Pro’s design is starting to feel dated, I don’t necessarily adopt that opinion. However, I still would have liked to see Apple spruce up the design in some way, similar to my thoughts about the MacBook Air (2020).

That said, the aluminum aesthetic is still incredibly sleek, even when compared to high-end Windows laptops. Its trackpad remains the best I’ve ever used, its sound is excellent, and most importantly, the 13-inch MacBook Pro (2020) is exceptionally durable.

I only have two major gripes as far as design is concerned.

It would be nice to see Apple increase the excellent looking display’s resolution to 4K like most Windows 10 laptop manufacturers have with their devices. Further, while the new 13-inch MacBook Pro’s bezels are small, I would have liked to see them minimized more, allowing for a slightly larger screen. Apple did this with the 16-inch MacBook Pro, and the tech giant should do the same with the 13-inch MacBook Pro. 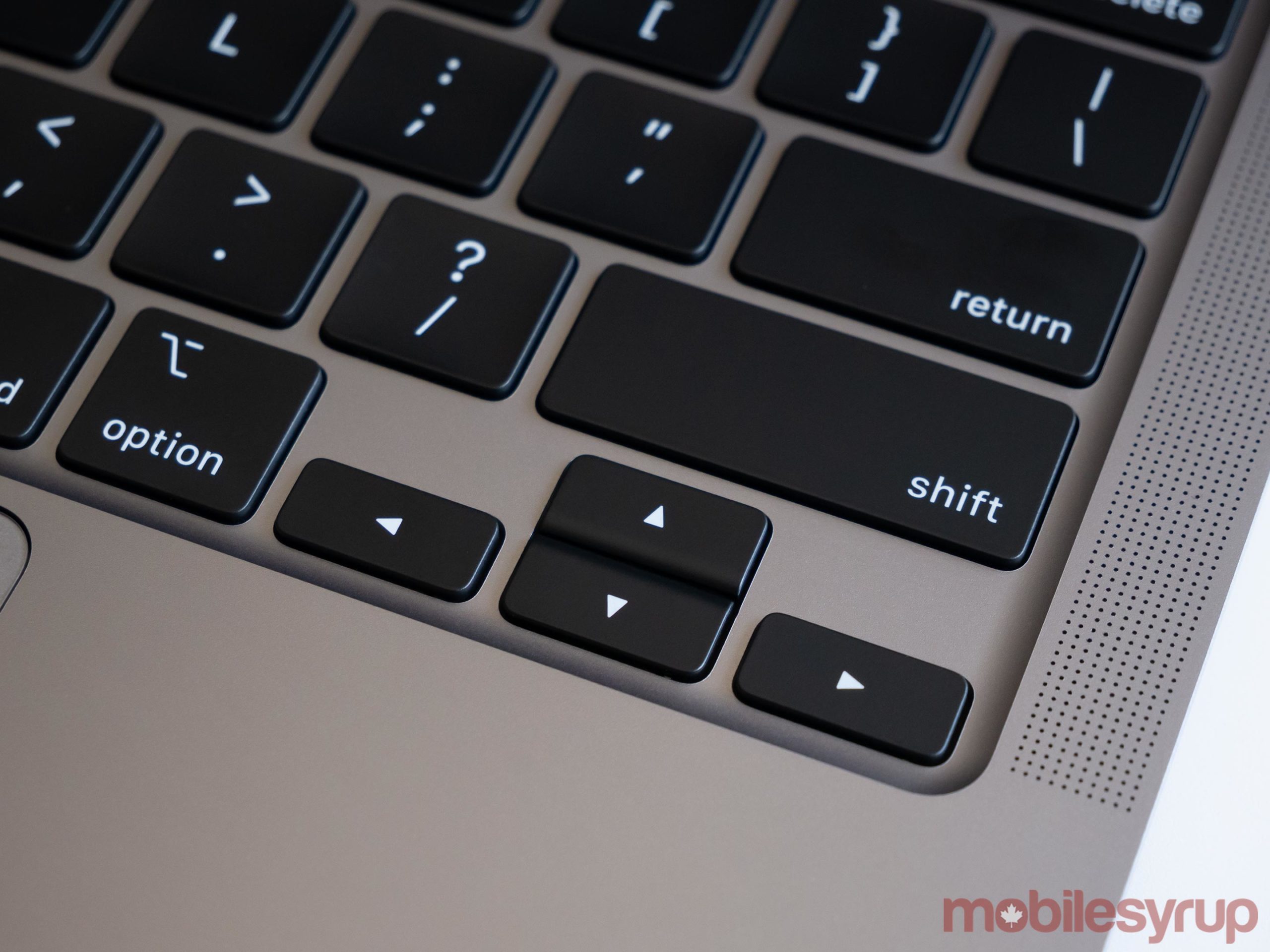 There’s also the question of the TouchBar. While I once felt the TouchBar held tremendous potential, at this point, it is what it is. Some apps take advantage of it in ways that make sense, with Adobe’s Creative Cloud suite being the most prominent example, while others ignore it entirely. Although I wouldn’t go so far as to say that I don’t like the TouchBar, beyond changing display brightness and volume levels, I find myself rarely using it.

The main upgrade this time around, whether you opt for the 8th Gen or 10th Gen version of the new 13-inch MacBook Pro, is the more reliable Magic keyboard. In short, the new keys feel great, just like they did with the 16-inch MacBook Pro and the more recently released MacBook Air (2020).

This means if you weren’t fond of the low key-travel Butterfly mechanism, the new, more traditional feeling scissor switch featured in the new 13-inch MacBook Pro, will likely be more appealing. Key travel comes in at a reasonable 1mm, and Apple’s new rubber dome keycaps give every keypress satisfying bounce and stability. 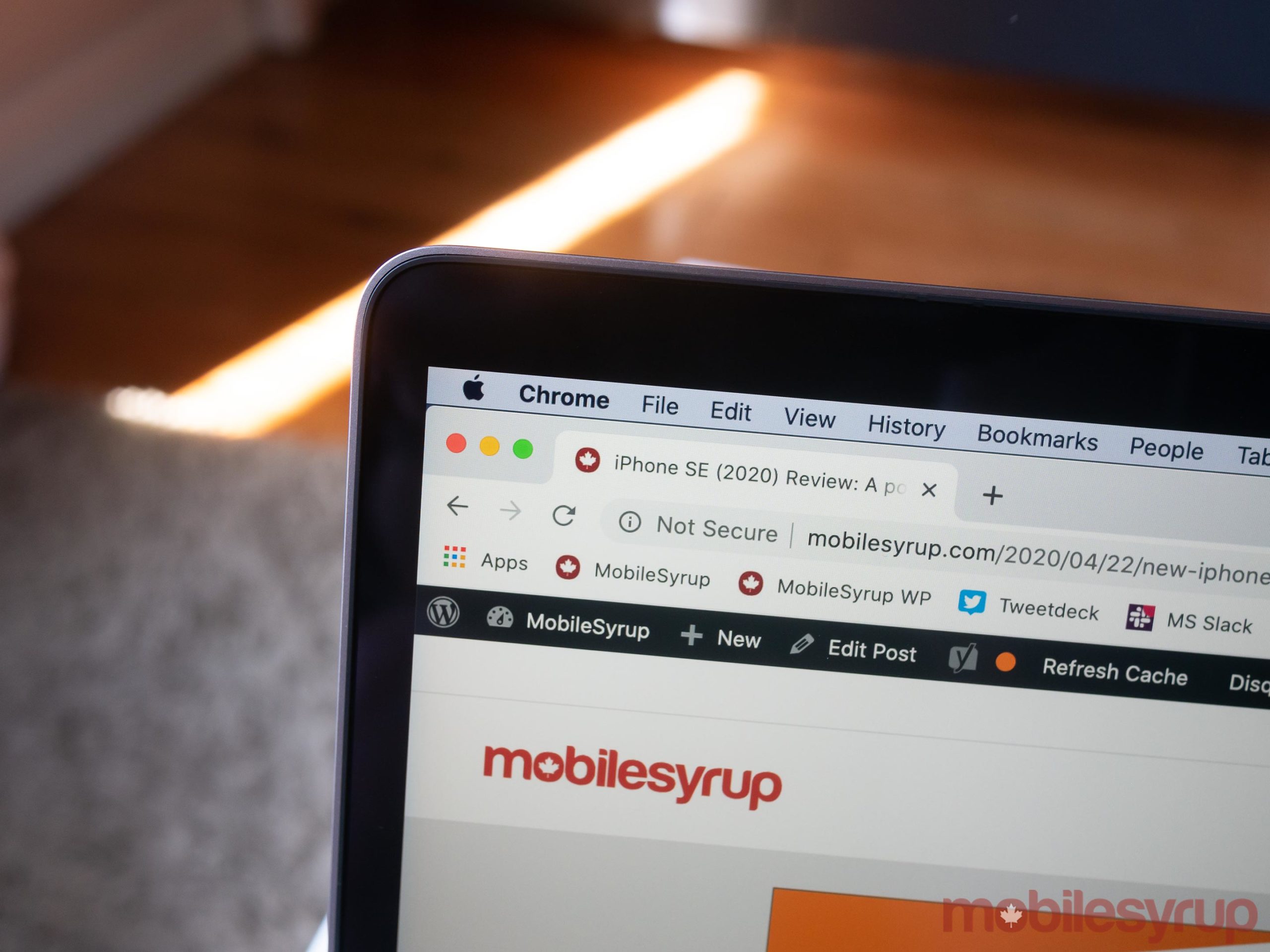 To be clear, I didn’t hate the Butterfly mechanism. In fact, I thought the third-generation version of the keyboard that included a silicon membrane was great, but given some MacBook Pro owners still experienced reliability issues, I understand why Apple needed to ditch the mechanism entirely.

Despite launching a comprehensive replacement program, the keyboard issues the MacBook Pro line has experienced over the last few years will always be a significant blemish in Apple’s otherwise pretty reliable hardware track record. At least now the Butterfly mechanism is completely dead given that the entire MacBook line has been refreshed with the Magic keyboard. 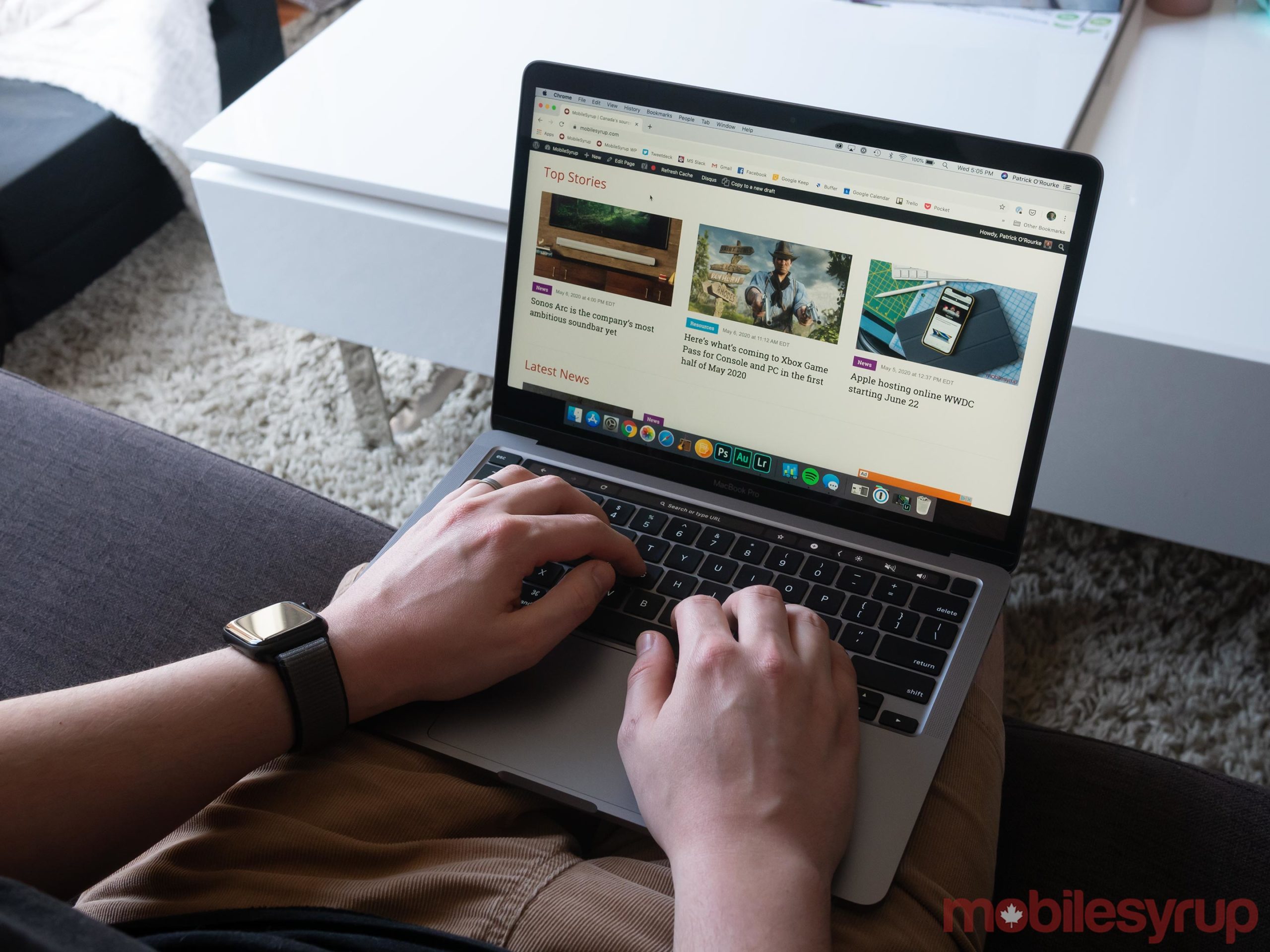 While it’s great to see Apple now releasing yearly processor updates to its laptop line, it seems like a strange decision on the tech giant’s part to only upgrade the higher-end 13-inch MacBook Pro configurations.

First off, only the 2.0GHz quad-core i5 and 2.3GHz quad-core i7 configurations include Intel’s 10th Gen 10nm architecture. The lower-end 1.4GHz quad-core i5 variant that only includes two USB-C ports (more on this later) still features Intel’s 8th Gen processor, just like it’s predecessor.

It’s odd Apple didn’t opt to upgrade the entire line to Intel 10th Gen processors. Also, it’s perplexing why the lower-end configuration only features two Thunderbolt 3 ports like the now-dead MacBook Pro ‘Esc’ model. My guess is from Apple’s perspective, the 8th Gen Intel Core i5 version of the 13-inch MacBook Pro is a replacement for the defunct MacBook Pro that didn’t feature a TouchBar. 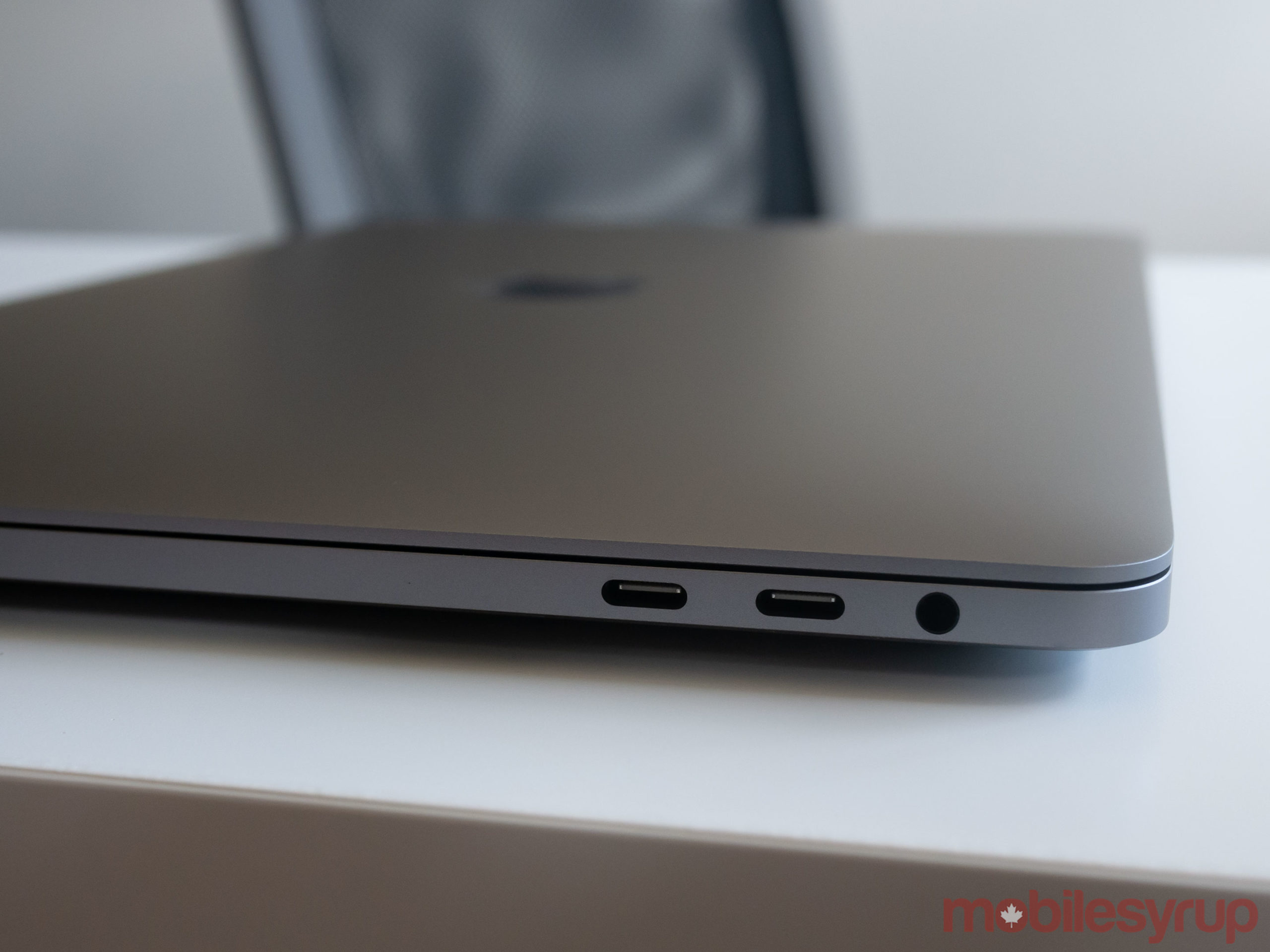 With all that said, anyone interested in buying either the $1,699 256GB or $1,949 512GB MacBook Pro configuration, is likely better off getting a MacBook Air (2020) given the two laptops likely benchmark very similarily.

Apple also upgraded the higher-end processor configurations to faster, more power-efficient 3733MHz LPDDR4X RAM, with once again, the slower processor option only featuring 2133MHZ LPDDR3 memory. This is a substantial generational leap and results in smoother performance across the board in my experience. In that same vein, Apple has also updated the Intel’s more powerful Iris Plus integrated graphics card, which could be useful depending on your workflow.

While a marked improvement on paper, I’ve never really put much stock into benchmarks. In practice, during my roughly two days so far with the 13-inch MacBook Pro (2020), I’ve found the laptop can handle running Photoshop CC, Lightroom CC and Audition CC more smoothly, three intensive programs I find myself often using simultaneously during the day. 4K video editing is also now a possibility for me, with UHD video playing back smoothly in Premiere CC.

The laptop also handles my external BenQ EW3280U 4K HDR monitor better than my 2017 MacBook Pro, resulting in no lag when I’m editing multiple photos and rapidly switching between several programs on the two displays. 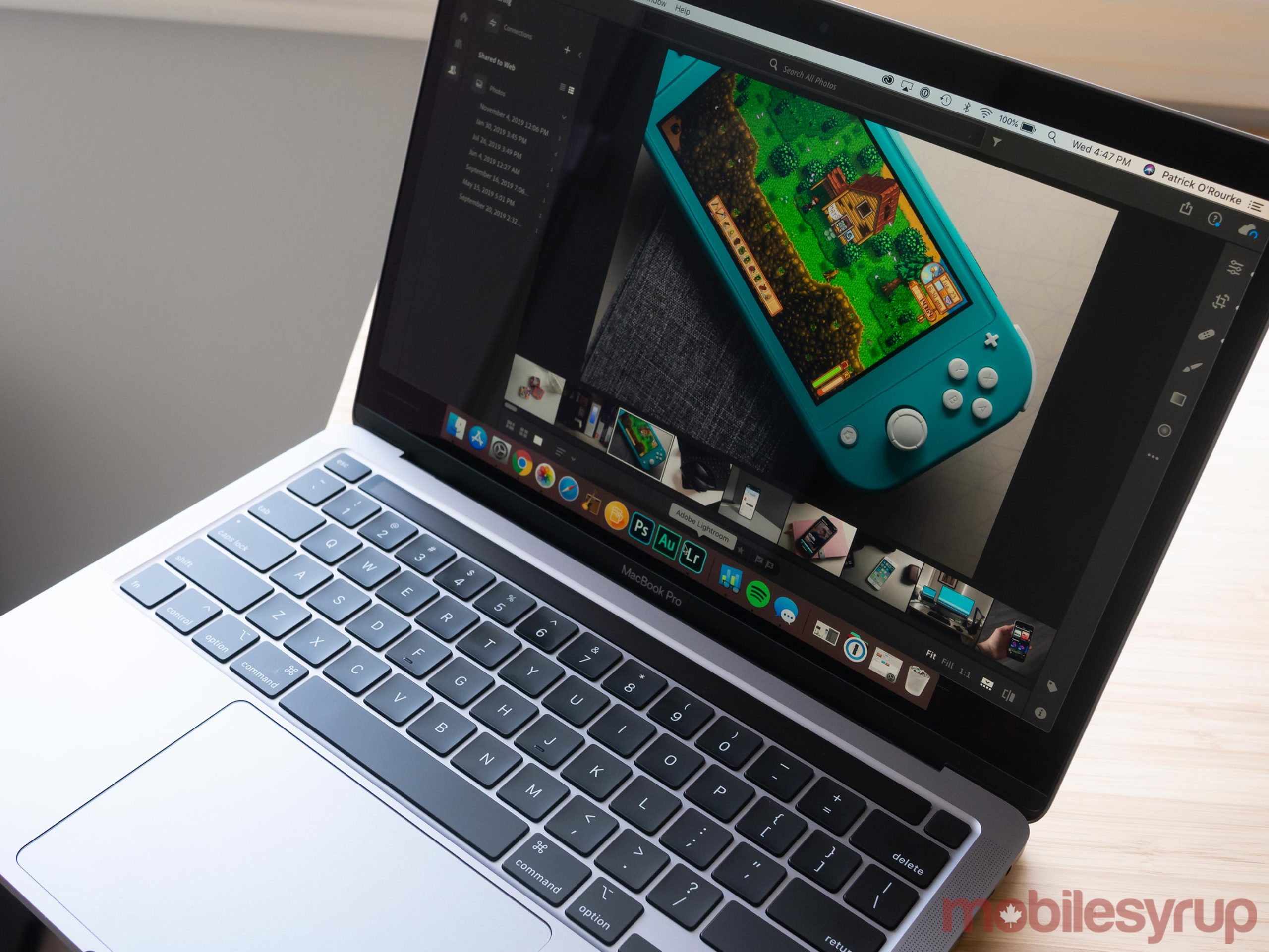 It’s also great the starting storage has now been updated to 512GB from 256GB with the 13-inch MacBook Pro that includes four Thunderbolt 3 USB-C ports and to 256GB from 128GB for the configuration of the laptop that includes two USB-C ports. Further, you can now add up to 32GB of RAM, which is another welcome change regarding the 13-inch MacBook Pro’s configuration options.

On the storage side, the 13-inch MacBook Pro can be equipped with an SSD ranging up to 4TB, though as expected, this comes at a premium. For example, adding a 4TB SSD to the 10th-gen i5 MacBook Pro adds an additional $750 CAD to the cost of the laptop. 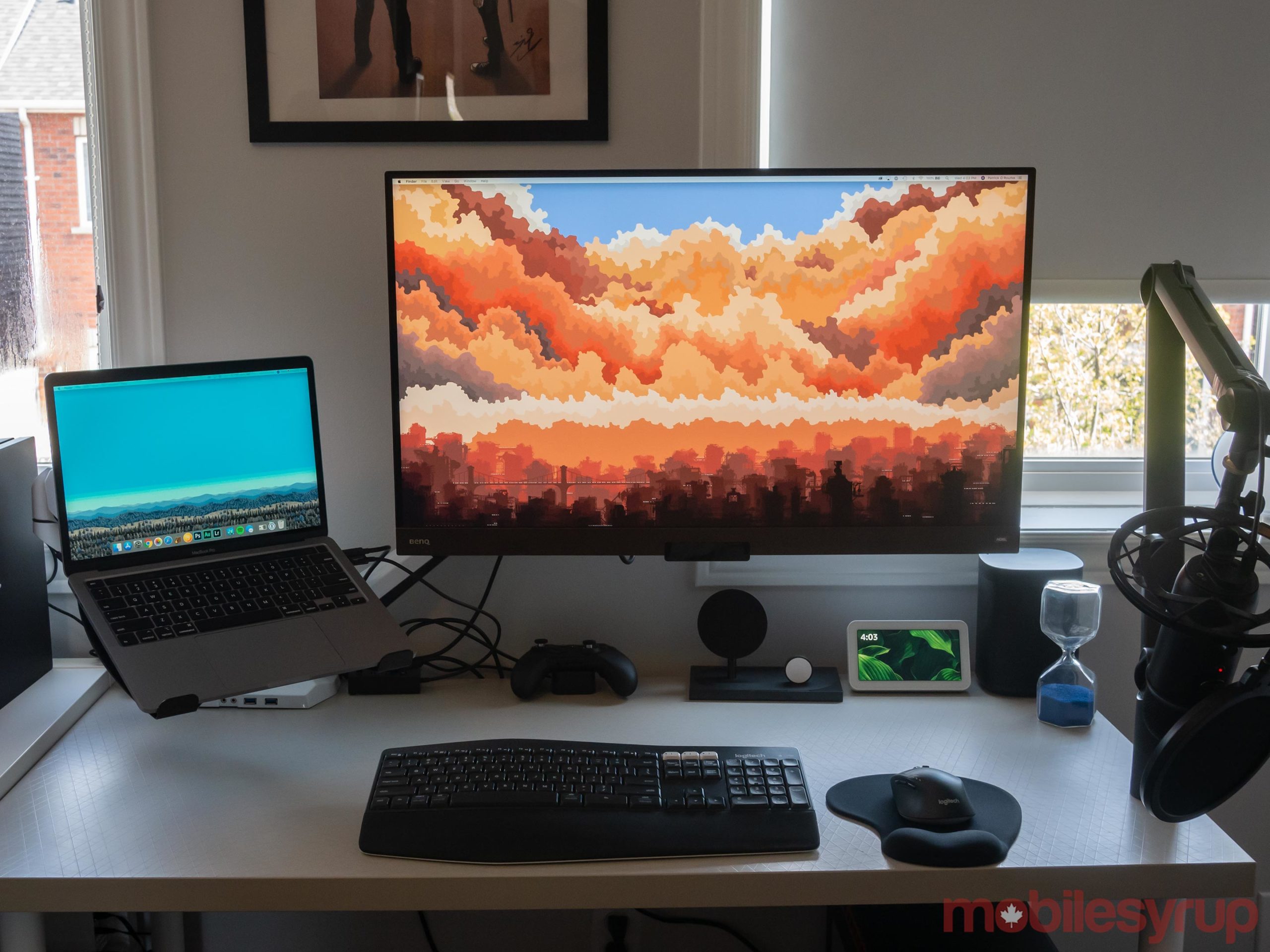 Yes, I know I still use Google Chrome, so in a sense, the poor battery life I experience with Apple’s MacBook line is partially my fault. During my time with the 13-inch MacBook Pro (2020), I got between five and six hours of usage before needing to plug it in, which is identical to my experience with the 13-inch MacBook Pro (2017). It’s also worth noting that in these tests I wasn’t using the laptop with an external display.

In the future, it would be great to see Apple hit the all-day battery life mark its older laptops were often capable of. This is a feature that’s been missing from the MacBook line since the launch of the most recent MacBook Pro revamp back in 2016.

Is it worth the upgrade? 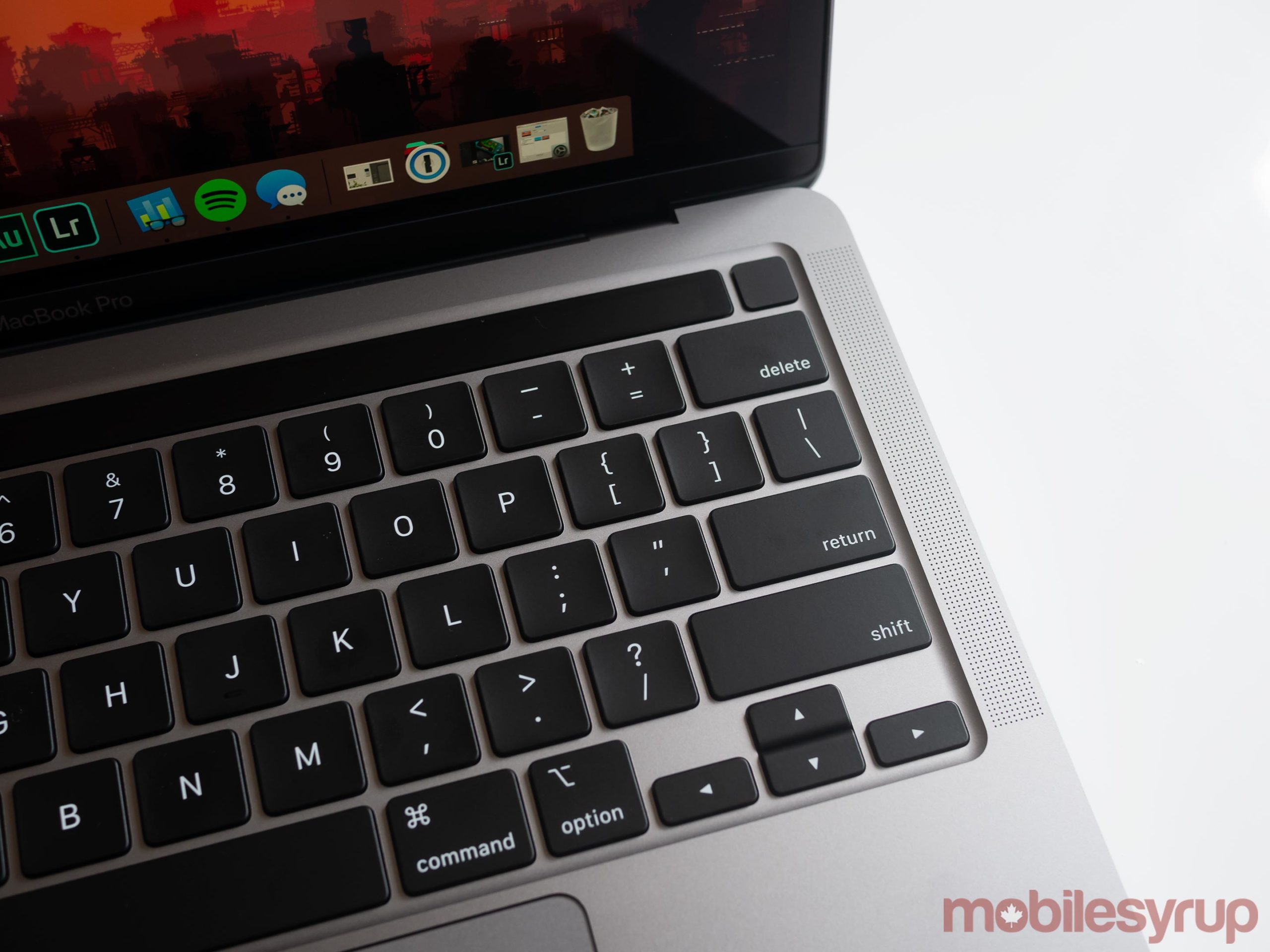 This is a difficult question to answer as it depends on which MacBook you currently have. If you’re still using a MacBook Pro from a few years ago and have had your Butterfly keyboard fixed and upgraded to the more reliable third-gen with silicon covers through Apple’s repair program, yet you’re still experiencing keyboard issues and aren’t ready to give up on the MacBook line yet, then the 10th Gen i5 13-inch MacBook Pro is the laptop you have been patiently waiting for.

On the other hand, if you’ve fixed your older 13-inch MacBook Pro’s Butterfly keyboard and haven’t run into any issues, you can probably wait a few more years before upgrading.

While I can’t be certain, I have a feeling there are a lot of people out there in a similar situation. 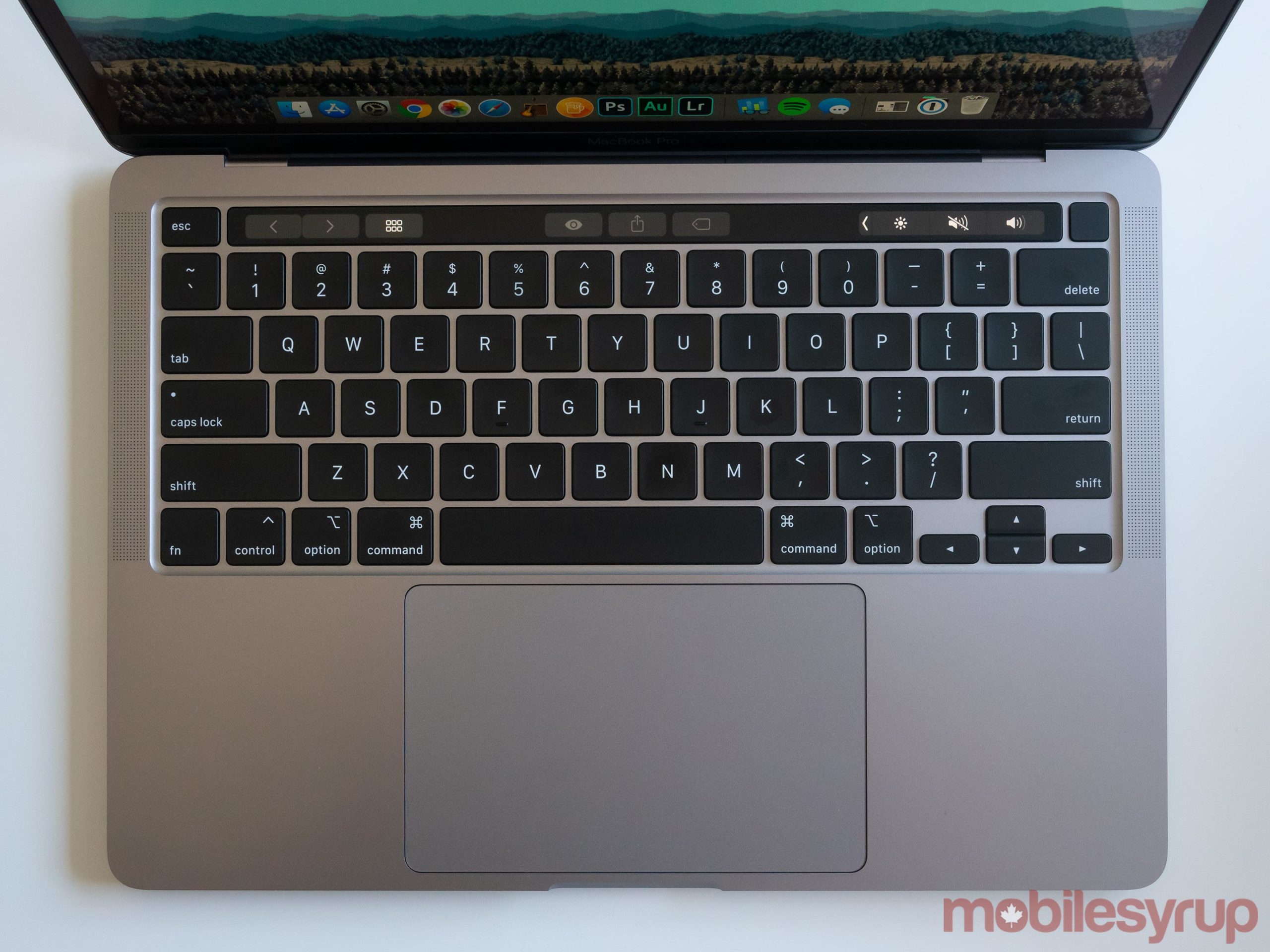 Regardless of the route you take, be prepared to pay a premium for the MacBook Pro. Even the lowest-end tier that features a 1.4GHz, quad-core i5 8th-generation Intel processor, 8GB of RAM and 256GB of storage, comes to $1,699, a price only a few hundred dollars more than the entry-level $1,299 MacBook Air. 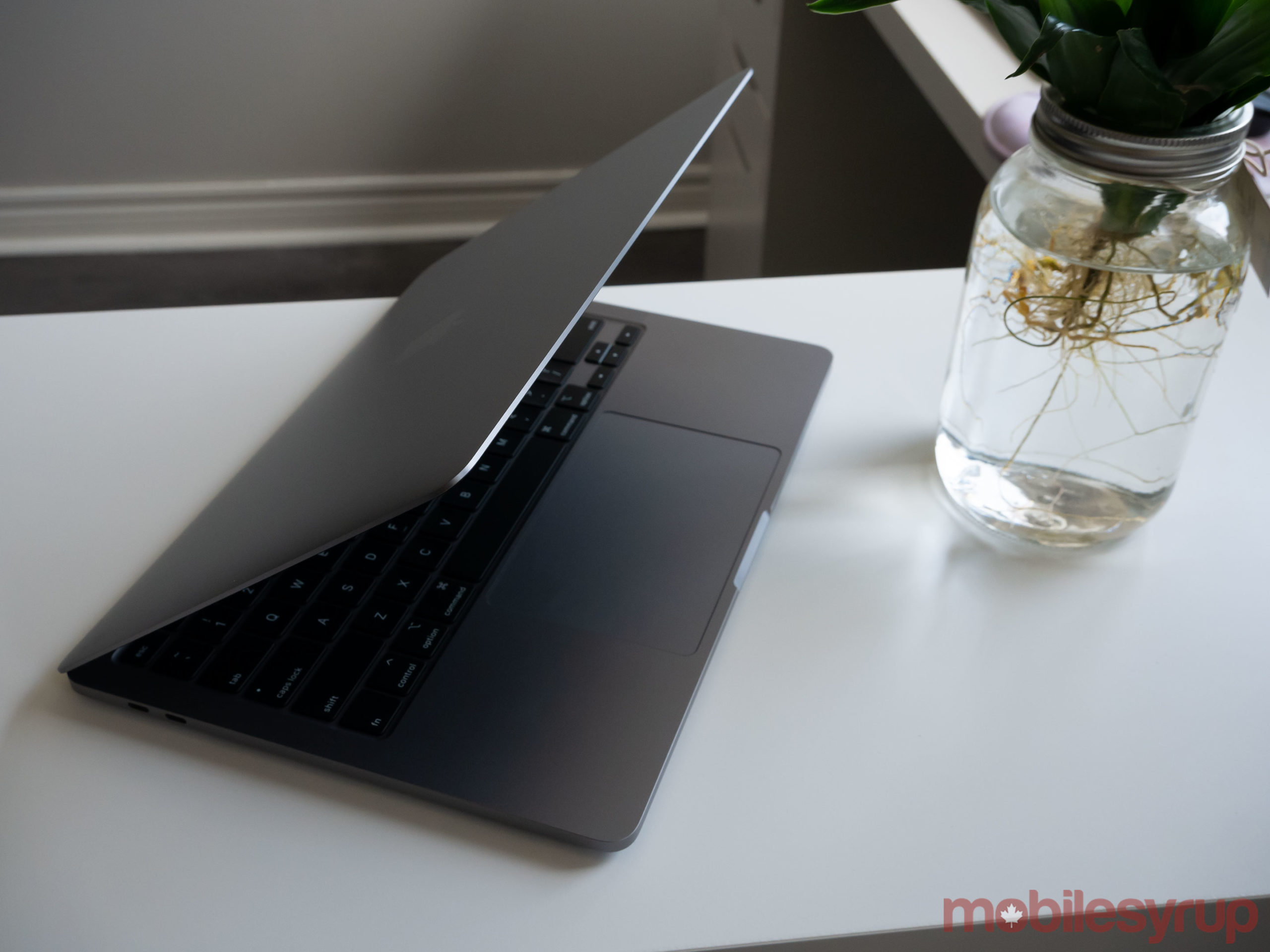 As always, there are comparably specced Windows devices that likely feature nearly as good build quality and in some cases better hardware, for substantially less money. Windows laptop manufacturers have really caught up to Apple in terms of build quality and overall look over the last few years. In the context of MacBooks, however, the laptop's audience likely isn't even remotely interested in making the jump to Windows 10, so in a sense, this argument is a moot point.

While it isn't always the case, most macOS users have several reasons for sticking with Apple's hardware and are not interested in switching to Windows, regardless of how often readers in the comment section tell them their insistence on using Mac hardware is not fiscally responsible.

In the end, the worthwhile new 13-inch Macbook Pro configuration is the laptop I really have been waiting for. That said, I can't help but wish Apple lowered its price slightly, reduced the display's bezels and increased the resolution to 4K. The 13-inch MacBook Pro (2020) is available to order now from Apple's website starting at $1,699