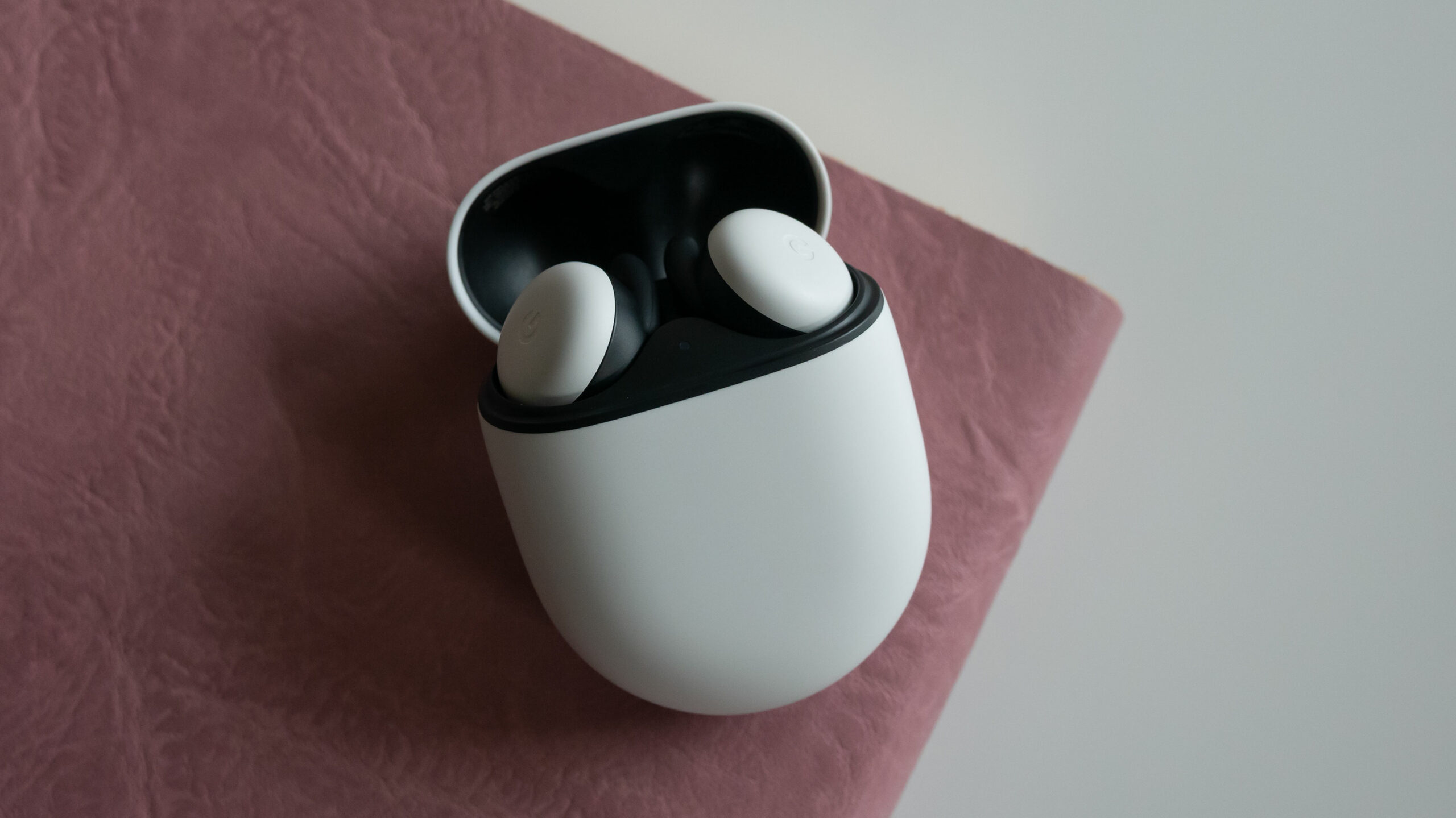 In several ways, Google’s new Pixel Buds are a significant leap over their bulky, not-actually-wireless predecessors in terms of performance, comfort and, most importantly, design. Instead of an awkward fabric cord connecting both buds, the new Pixel Buds are completely wireless, just like Samsung’s, Microsoft’s and Apple’s earbud offerings.

The new Pixel Buds sound just as good as Apple’s standard AirPods (if not better), though they feature slightly less bass, include a mostly comfortable in-ear design and are priced competitively at $239 CAD. The only significant downsides I’ve encountered with the Pixel Buds are that they don’t feature true noise-cancelling or a transparency mode and have less than stellar battery life.

Unfortunately, however, in the increasingly competitive Bluetooth wireless earbud market, beyond impressive sound quality and being surprisingly comfortable, the Pixel Buds do little to stand out from the growing competition. 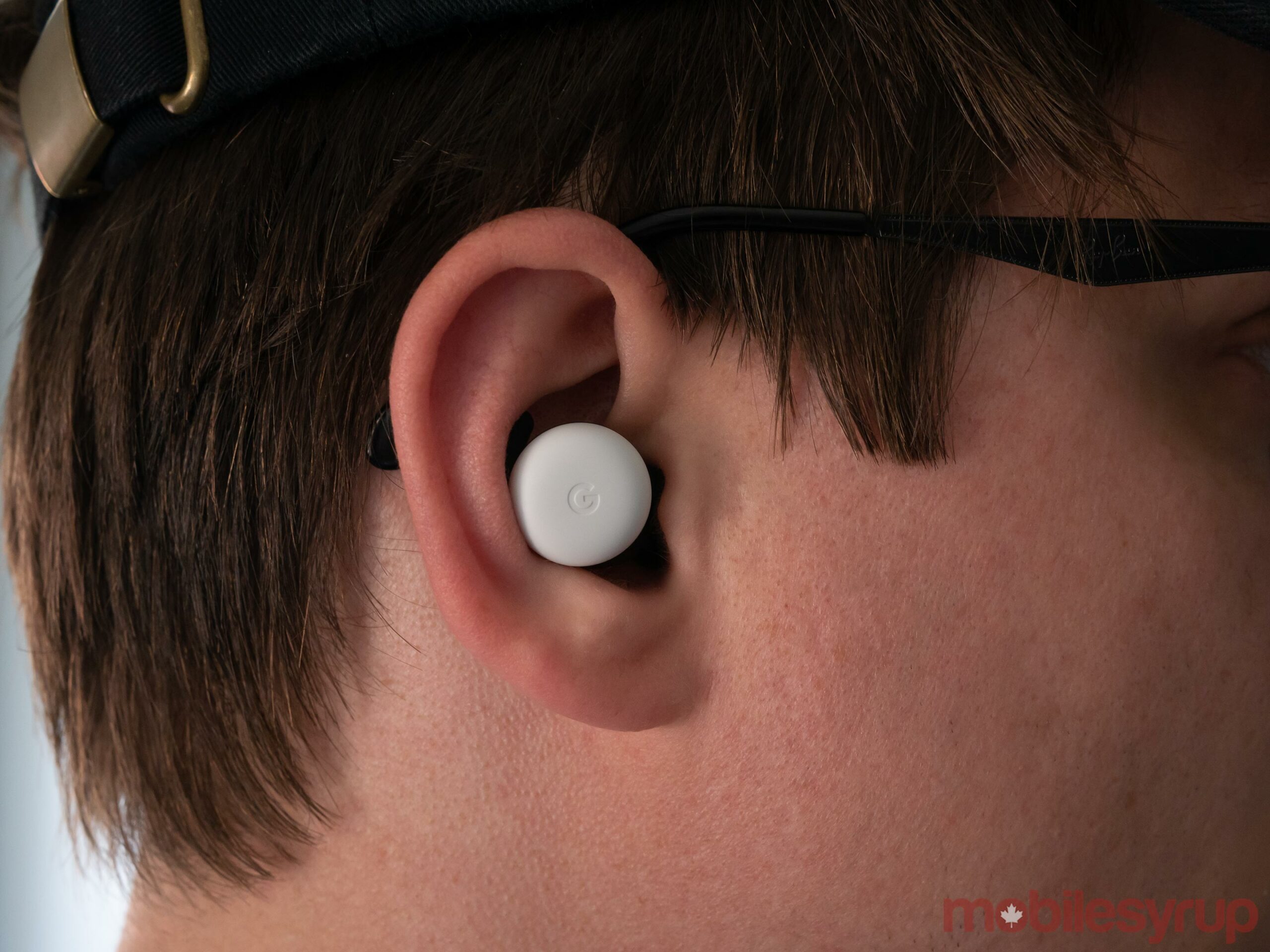 Unlike last year’s Pixel Buds and their fabric-covered mess of a case, this refresh includes a high-quality, brushed plastic charging case that looks like a tiny egg or, if you grew up in the 90s like myself, a Tamagotchi.

The Buds’ case also makes a satisfying snap when you open it. Other features worth noting include a button on the bottom rear, a light on the inside for syncing with devices and a light on the outside to indicate charging. Further, it’s Qi-compatible, just like Apple’s $269 AirPods that include a wireless charging case.

On a side note, the case’s plastic is surprisingly difficult to scratch, which is in stark contrast to Apple’s AirPods cases’ shiny white plastic that’s prone to scuffs. The buds themselves feel equally high-quality and are comparable to the Galaxy Buds+ and AirPods in terms of how solid they feel. Most importantly, they feature an in-ear design that’s shockingly comfortable and includes three different sized ear pieces.

Usually, in-ear earbuds feel like an insect is borrowing into my ear, but that isn’t the case with the new Pixel Buds. On that note, similar to the more expensive AirPods Pro, that air-being-sucked-out-of-your-ears feeling I often experience with some in-ear wireless earbuds isn’t present. They also adopt a low, discrete profile, unlike the AirPods Pro, for example. This makes them more difficult to notice in your ears that other wireless earbuds. 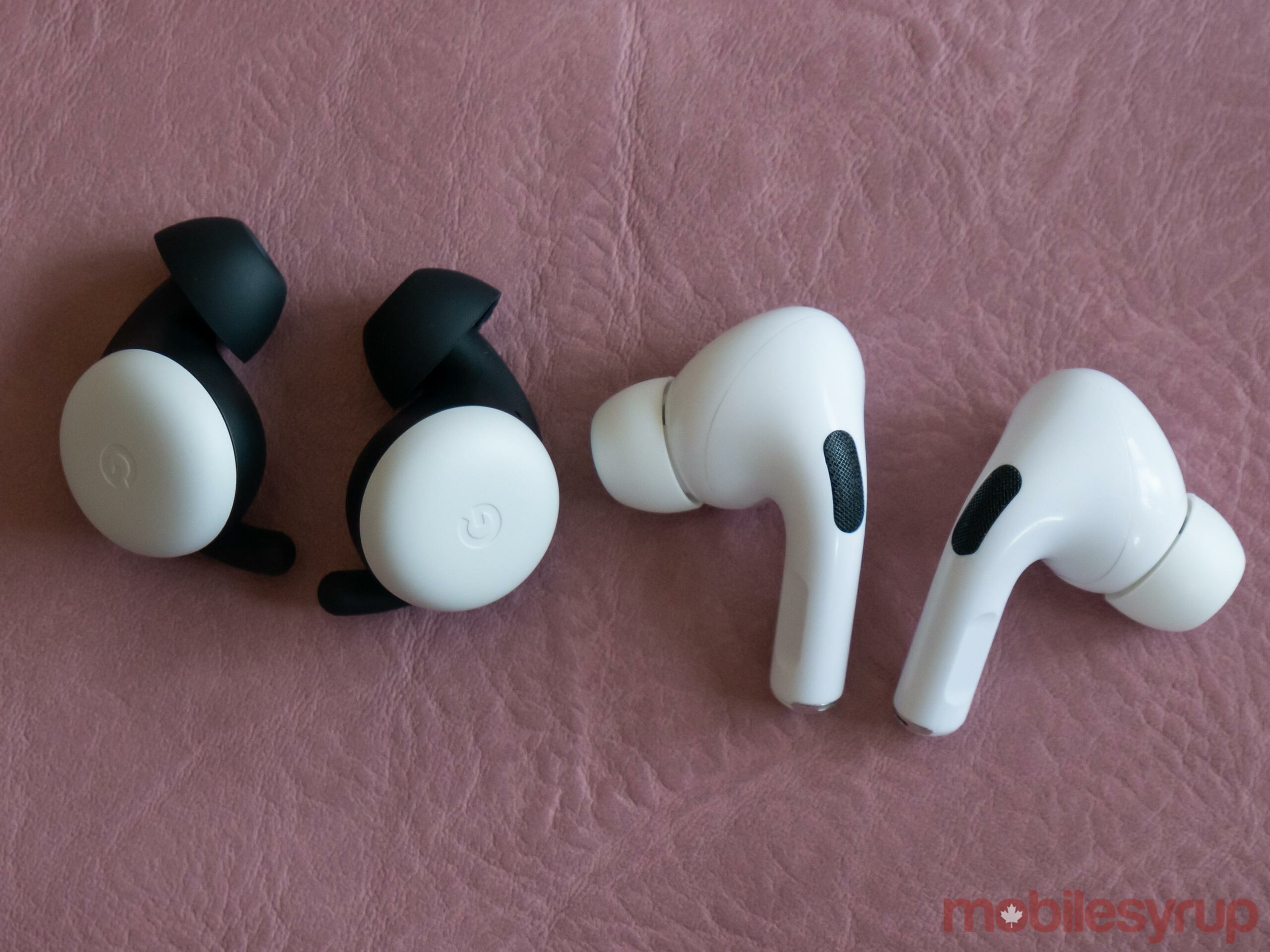 Unfortunately, the small rubber arm that locks the earbuds in place can get uncomfortable when you wear the Pixel Buds for extended periods. It would have been great if Google opted for some sort of softer material, or allowed you to change the arm like Samsung does with the Galaxy Buds+. That said, the fin-like band does ensure the Pixel Buds fit more snugly in my ears.

I’ve worn them while running and moving around the house and have only encountered one instance where they fell out of my ears when I was bending over. This is unlike the AirPods and AirPods Pro, which I find are always falling out of my ears, even when sitting stationary at my desk. I experienced similar issues during my time with Samsung’s Galaxy Buds as well.

Overall, the Pixel Buds are the most comfortable wireless earbuds I’ve ever worn. They’re so light that at times I don’t even notice they’re in my ears until the fin starts to become uncomfortable after a few hours. 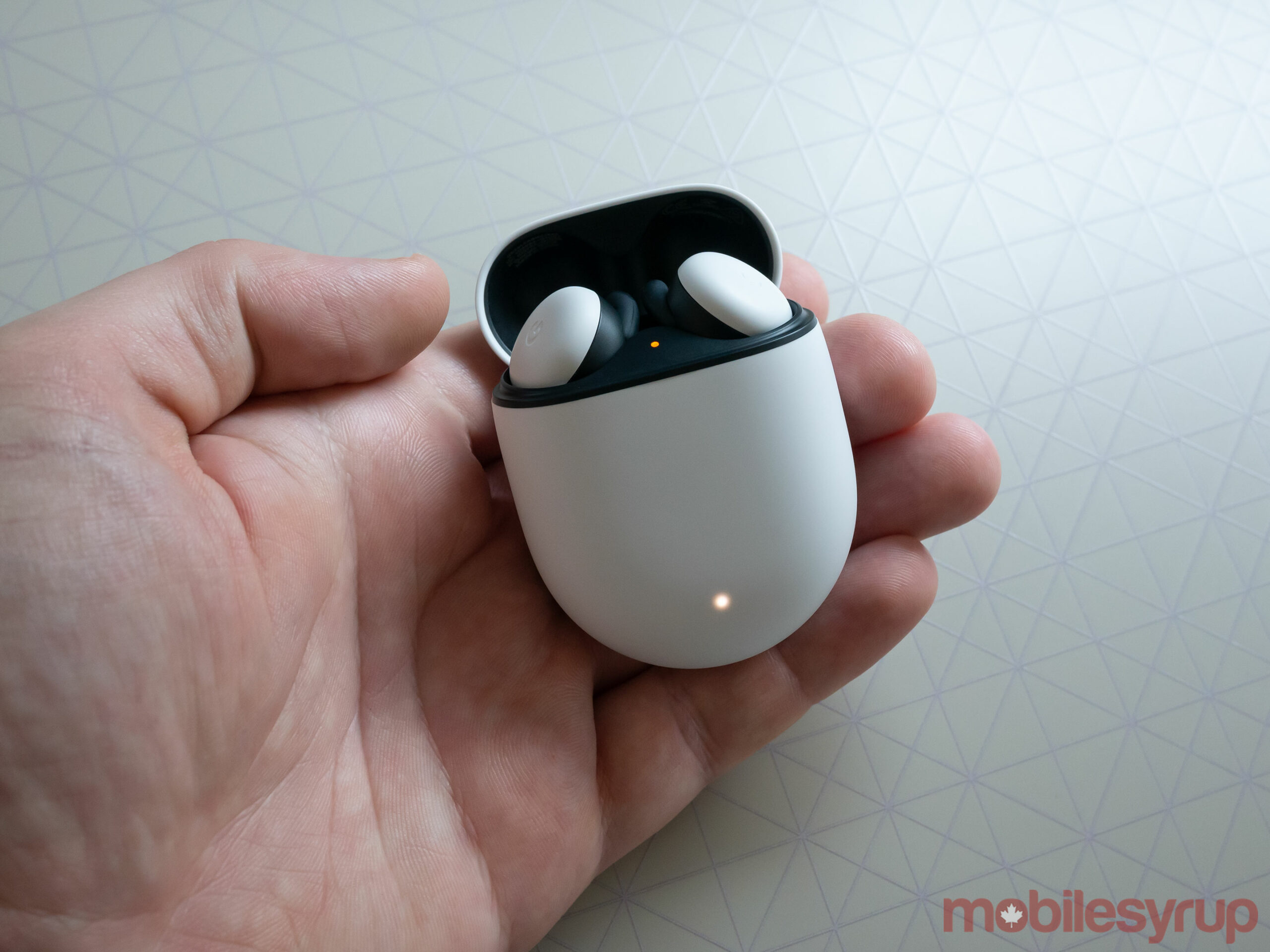 Over the last few days, I’ve used the Pixel Buds with several devices, including the Pixel 4 XL, the iPhone 11 Pro Max and the MacBook Pro.

The earbuds are designed to work best with the Pixel 4, which makes sense, given that the Pixel Buds are a Google product. Just like with the AirPods’ proprietary H1 chip, all you need to do is open the Pixel Buds to pair them with a Pixel 4 instantly. The earbuds will also connect rather quickly with most other Android phones in my experience.

On the Apple side of things, I needed to hold down the pairing button on the rear of the Pixel Buds to get them to connect to my MacBook and iPhone. That said, other than the extra step in the pairing process, the Buds performed great with Apple’s devices for the most part. I ran into one instance where the Pixel Buds needed to be reconnected because the sound wasn’t playing through my MacBook Pro, but to be fair, I’ve also encountered similar problems with the AirPods and AirPods Pro.

It’s important to note that if you plan to use the Pixel Buds with an Apple device or PC, it’s a good idea to set them up with an Android smartphone first. This allows you to get the latest firmware update, turn on ‘Adaptive Sound’ and ensure in-ear detection is active. Surprisingly, in-ear detection works with every Bluetooth device I tested, unlike Apple’s AirPods, which require a third-party app for the feature to be compatible with Android. 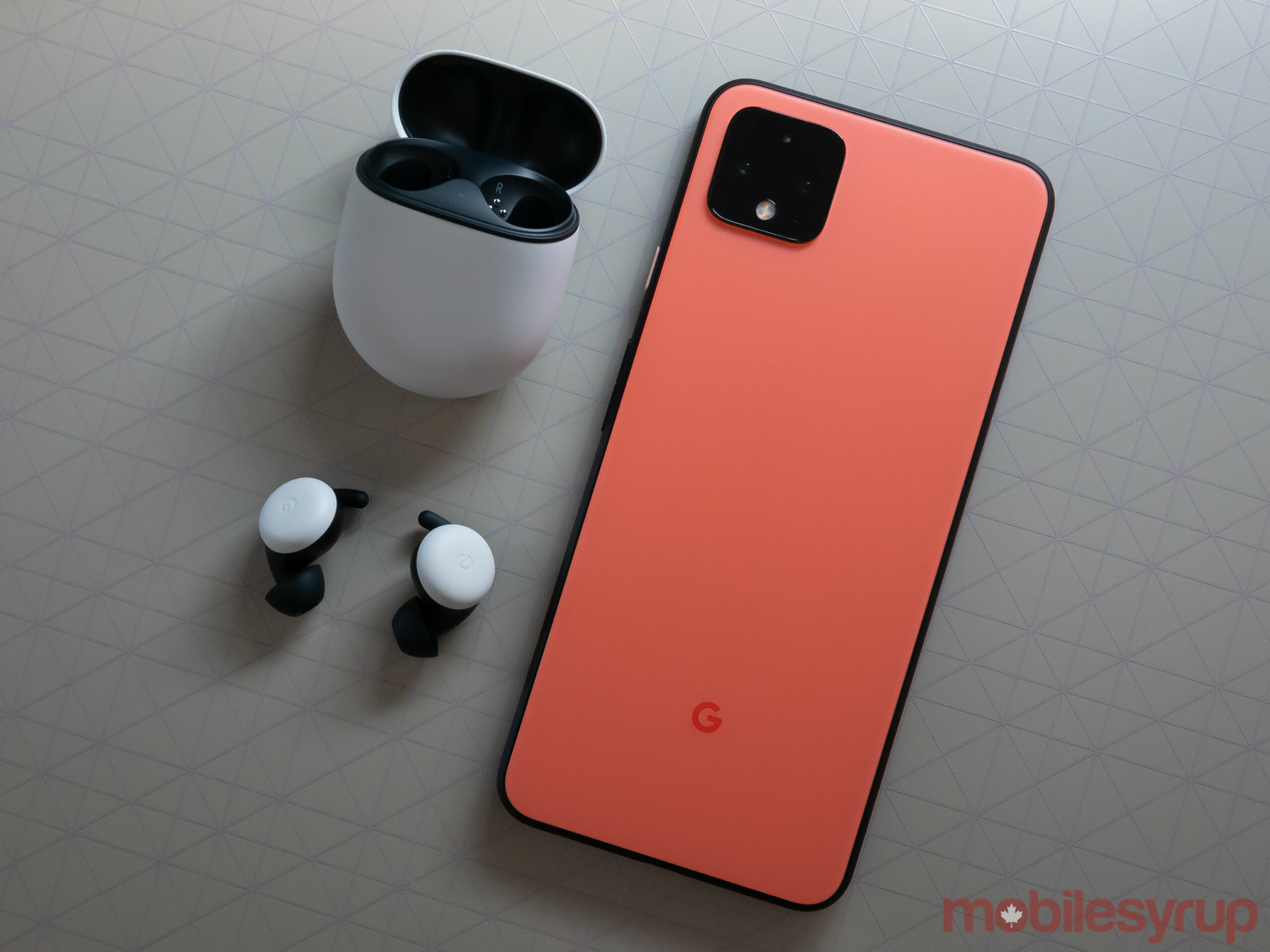 However, if you don’t have an Android device, you aren’t missing much when it comes to Adaptive Sound. While the Pixel Buds don’t feature true active noise-cancelling like the more expensive AirPods Pro and Sony’s WF-1000XM3s, Google says that Adaptive Sound is designed to make subtle adjustments to the earbuds’ volume levels as the noise around you shifts.

While the feature works, the change is often so subtle that I barely notice it. To be fair, the once-excellent noise-cancelling featured in Apple’s AirPods Pro also isn’t as great as it was when the wireless earbuds launched due to the release of a firmware update.

Another important and useful feature is Google Assistant integration. If you’re using an Android device with the Buds, you’ll be able to receive all of your smartphone notifications, as well as use the “Hey Google” wake-up phrase. Though I’ve never had much use for voice-activated assistants, it’s great to see Google match Apple’s ‘Hey Siri’ AirPods functionality with its far more capable assistant. 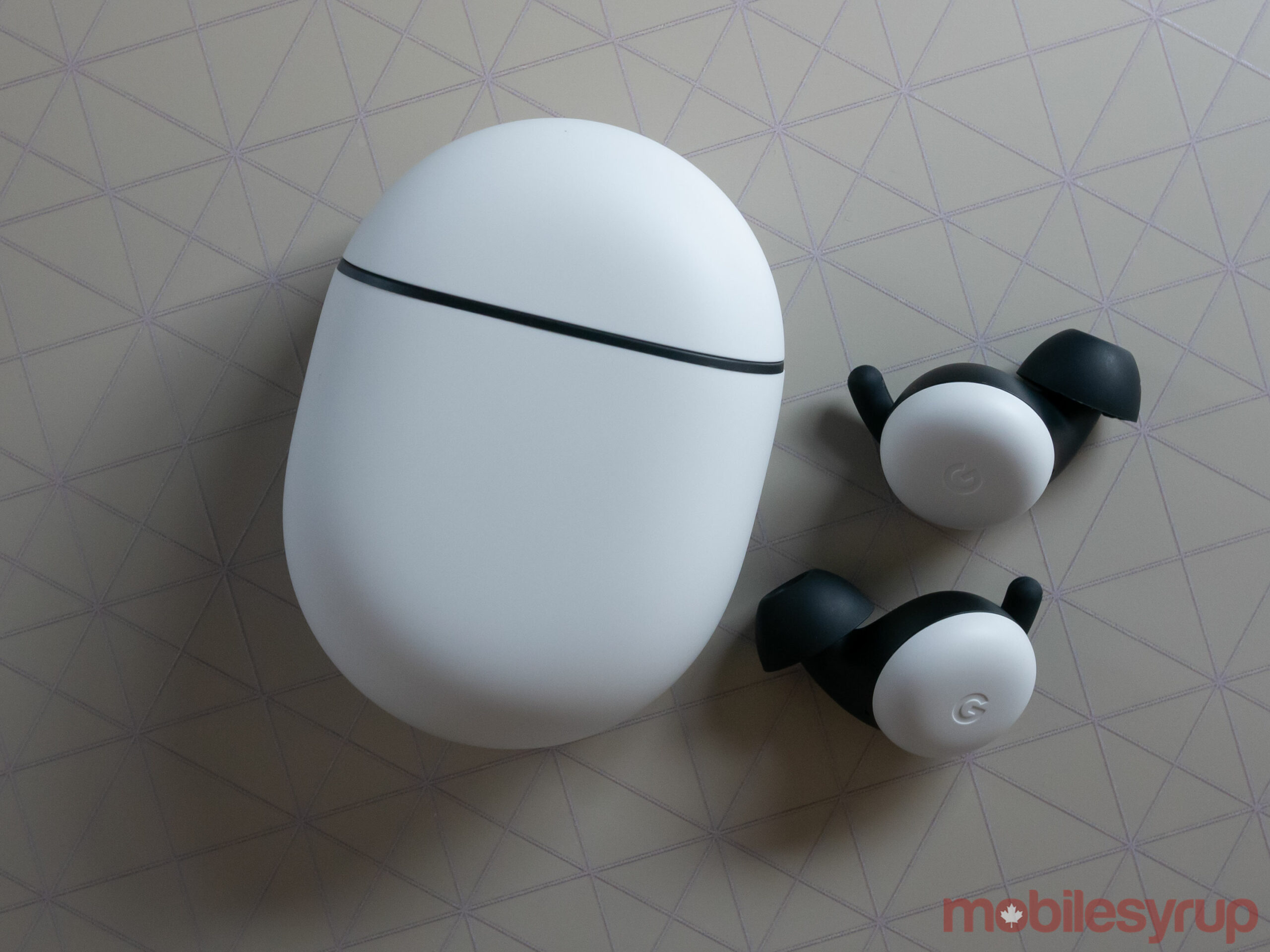 Finally, there’s the Buds’ interesting translate feature that allows users to somewhat awkwardly live-translate languages through the Pixel Buds and an Android smartphone. While the feature works, it’s not quite as seamless as Google makes it out to be, given that translating requires you to repeatedly tap the Pixel Buds to speak and press a button on your device to translate.

I tested out the feature with my bilingual partner and experienced awkward gaps in the conversation. However, the live translate functionality does work quite well though once you get the hang of it.

The Buds’ touch controls are stellar and more responsive than any pair of wireless earbuds I’ve ever used, including the AirPods, AirPods Pro, Galaxy Buds+ and even Sony’s WF-1000XM3s. The controls include the following: a single tap plays/pauses music or an incoming call, double-tap skips a track or rejects a call, a triple tap goes back, swiping forward turns the volume up and swiping backwards turns it down. Unlike Apple’s AirPods, I found the controls quick and responsive, but unfortunately, you can’t customize them.

Another feature that’s important to mention is IPX4 water and dust resistance. This means you don’t need to worry about getting the Pixel Buds a little wet if you plan to use them while exercising. 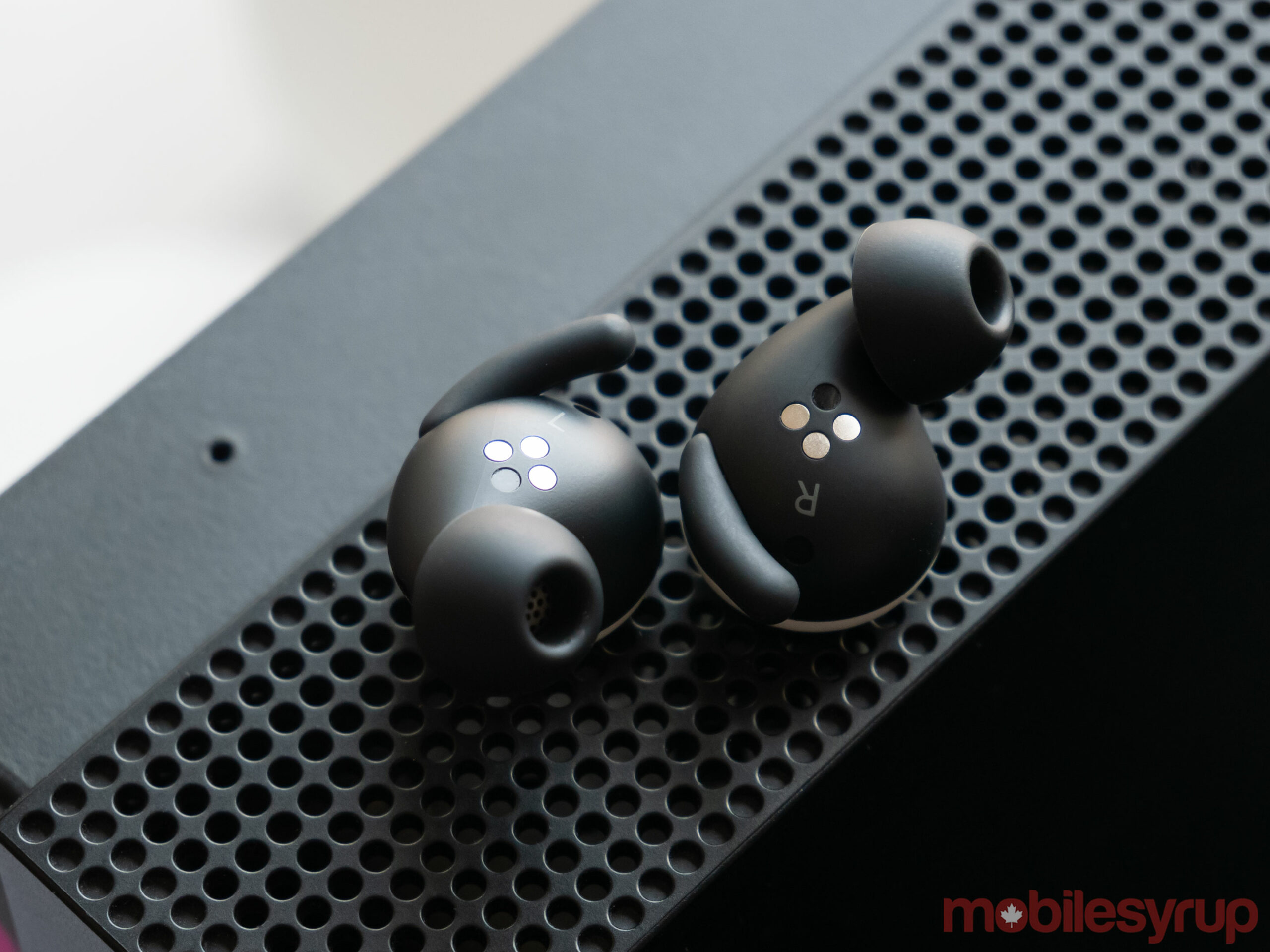 For their price tag, the Pixel Buds sound excellent. Everything from New Found Glory’s “Greatest of All Time” to Alanis Morissette’s “Ironic” sound great pumping through Google’s new wireless earbuds. Depth in sound is notable with great range across the board between mid and high tones. It’s even possible to hear specific instruments with the Pixel Buds, which isn’t something I experienced with Apple’s 2nd-gen AirPods of Samsung’s Galaxy Buds+.

The Pixel Buds lack any semblance of bass, however. For example, a track like Lil Peep’s “Benz Truck” that hinges on a deep bass guitar riff sounds very different playing through the Pixel Bids than it does with other wireless earbuds.

In some ways, the Pixel Buds likely have great highs, mids and lows because the earbuds lack bass, so in a sense, this could be an advantage depending on your taste. With this in mind, it would have been great if the earbuds featured a customizable EQ that allowed the user to change the amount of bass they want the earbuds to have. 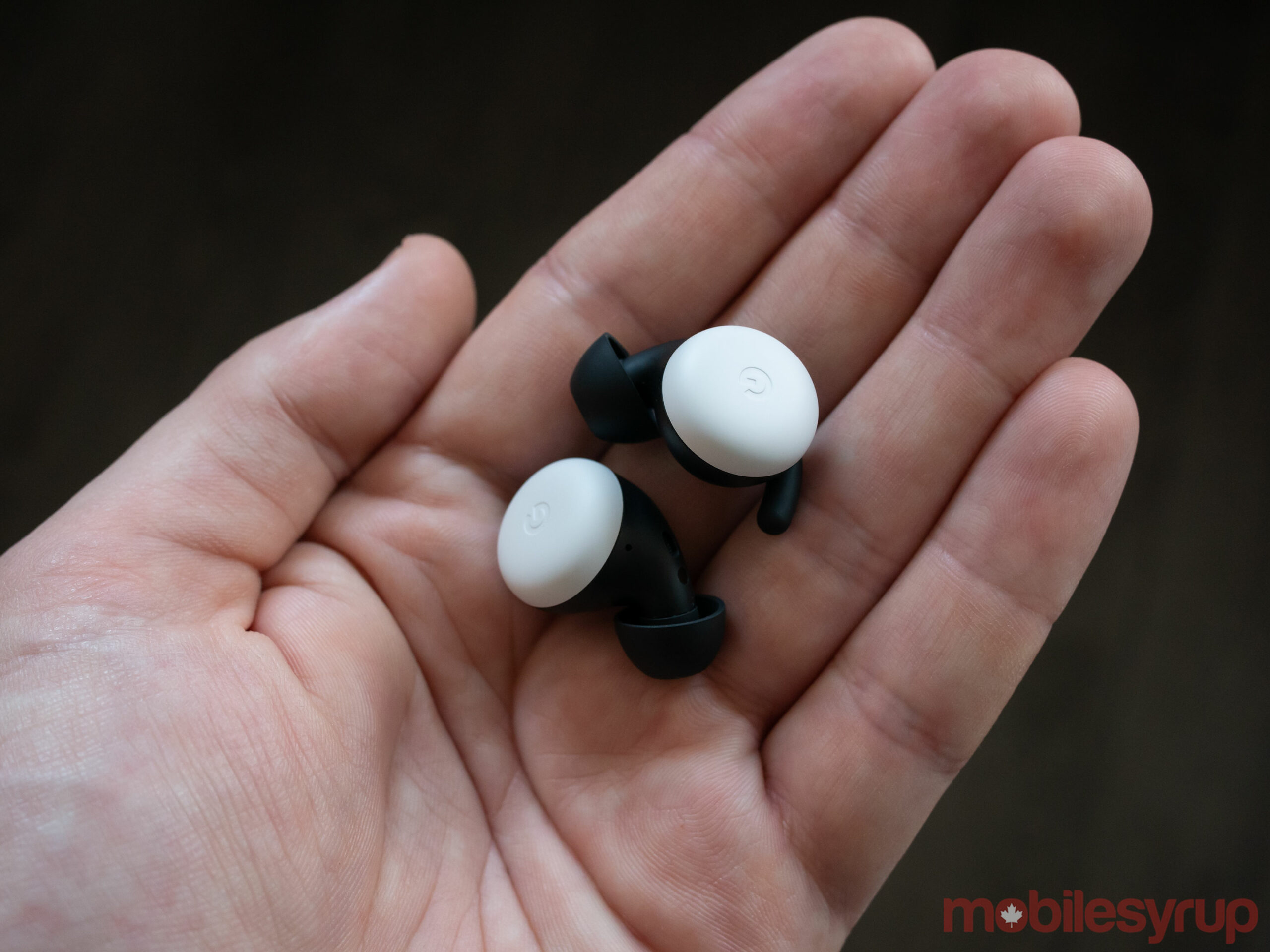 My most significant issue with the Pixel Buds beyond that they aren’t comfortable to wear for long periods is their disappointing battery life. In my experience, the Buds came in at roughly five to six hours, while Samsung’s Galaxy Buds+ and several other wireless earbuds push well beyond this mark. To be fair, this is comparable to the battery life I experience with both Apple’s AirPods and AirPods Pro.

Given that the Pixel Buds don’t feature true active noise-cancelling like the AirPods Pro and other higher-end wireless earbuds, I expected more battery life out of them. The charging case measures in at 24 hours of battery life and is capable of charging the buds to 100 percent in a little over two hours when plugged in. Unfortunately, this means that without at least a few charging breaks, you won’t be able to get a full day of use of the new Pixel Buds, similar to Apple’s AirPods and AirPods Pro.

Mic and call quality isn’t impressive either, with voices sounding muffled and distant. That said, I’ve experienced similar mic quality issues with every pair of wireless earbuds I’ve ever used, including even the expensive AirPods Pro. 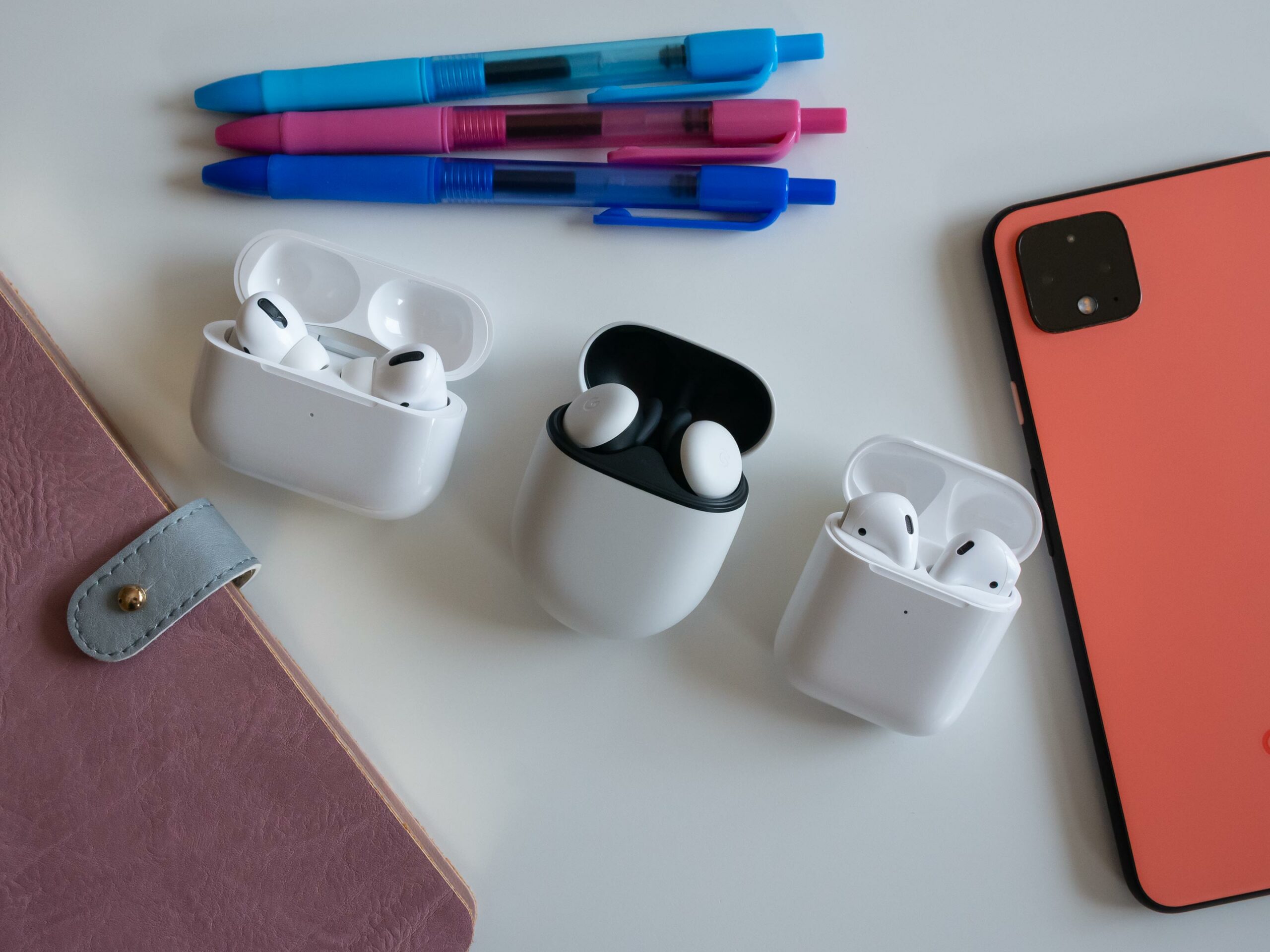 Great but not unique

The Pixel Buds are comfortable as long as you're not wearing them for long periods of time, feel great and are easy to connect to most Android devices. They also have a decent price tag, an excellent charging case, and unlike a lot of in-ear earbuds, have a wide range of sound.

However, their battery life isn't stellar given that they lack real noise-cancellation, which is difficult to look past in the increasingly competitive earbud space. They also feature almost no bass.

Still, if you're after a quality pair of wireless earbuds, Google's latest Pixel Buds check several essential boxes, and most people will be more than happy with them.

The Pixel Buds are now available in Canada for $239 CAD. Only the 'Clearly White' variant is currently available, although 'Quite Mint' and 'Almost Black' will come at a later date. The 'Oh So Orange' Pixel Buds that launched a few months ago in the U.S. aren't coming to Canada

Update 08/21/2020 at 1:23pm ET: Google has released an update to the Pixel Buds that adds several new features to the earbuds, including the ability to turn off touch controls, 'Find My Device' integration, and most importantly, a 'Bass Boost' setting. Though I've only tested out the Bass Boost setting for a few hours, it seems to solve the Pixel Buds' bass issue.

"Google's latest Pixel Buds check several essential boxes, and most people will be more than happy with them"