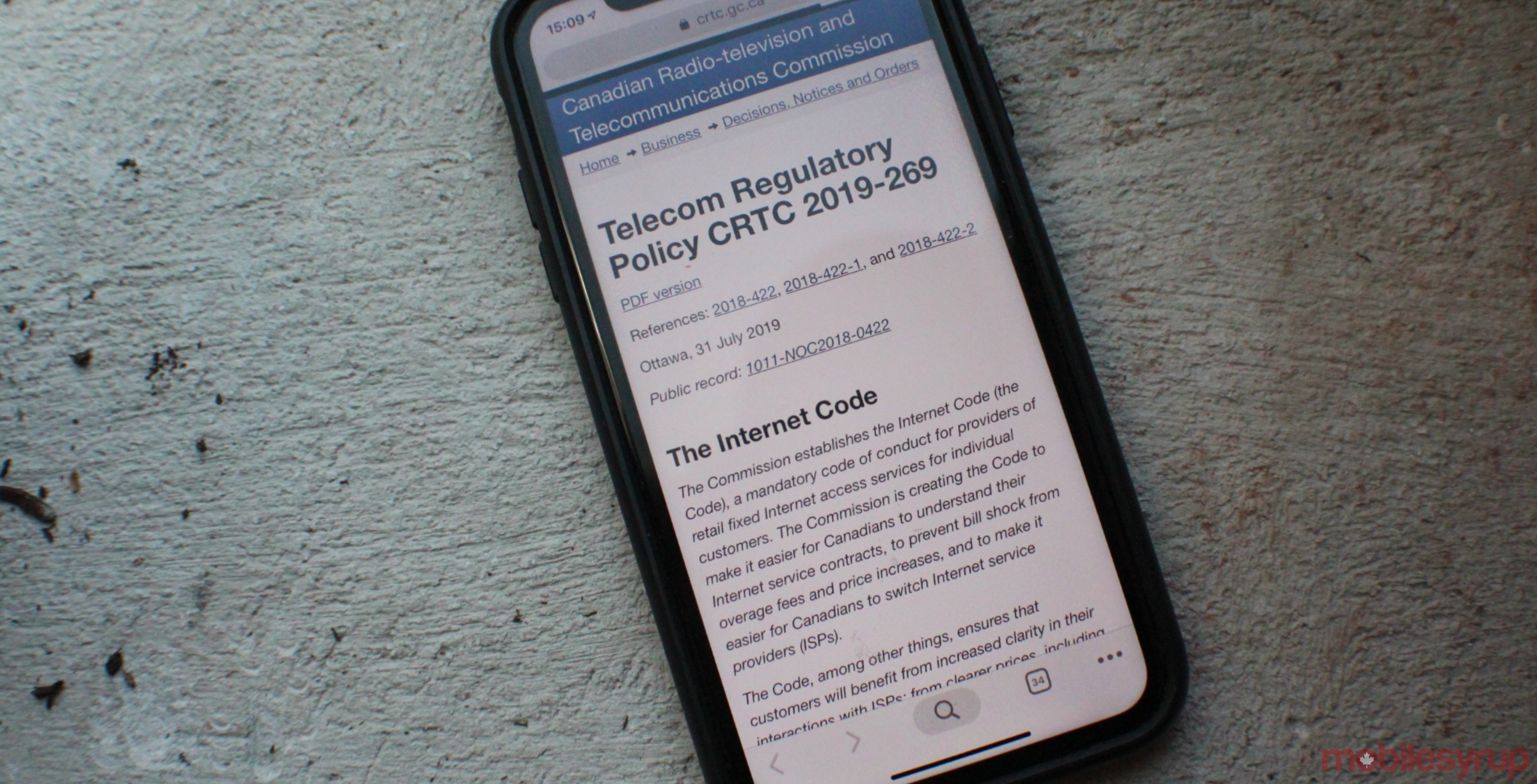 CRTC chairman Ian Scott says increasing the timeframe for Internet Code consultations would have significantly delayed the new code’s release, adding it had to be pushed out before the federal election.

The Canadian Radio-television and Telecommunications Commission (CRTC) released the code on July 31st after two sets of consultations (one in November and another in February) took place. The new code will come into effect on January 31st, 2020.

Among various points, the code will offer Canadians easy-to-understand contracts, documents and policies surrounding service calls, outages, security deposits and disconnections. It will also allow for a better understanding of prices, offering notifications when Canadians go over internet data limits and the flexibility of cancelling a contract within 45 days without paying a cancellation fee, according to the CRTC.

Public interest groups have argued that the time frame was not long enough considering they had to submit to other ongoing proceedings like the Broadcasting and Telecommunications Legislative Review.

The Public Interest Advocacy Centre (PIAC) said it would boycott the proceeding after it submitted a deadline extension request in November arguing that the ISP code of conduct proceedings would be influenced by any decision regarding the CRTC’s ongoing investigation into allegations of aggressive or misleading telecom sales practices.

“It is so bad, I cannot believe what has come out of this thing,” he said. “We said, and part of the reason why we didn’t want to join, was it was too fast. The CRTC hadn’t considered the effects of the sales practices report and they didn’t show how they would combine the two.”

Scott thanked PIAC during a separate phone interview with MobileSyrup and said the CRTC “values the contributions made by groups like PIAC.”

“There are a lot of times when people aren’t happy with the process. Carriers, consumer groups, and yes, there were other things going on, but we have other things going on as well,” Scott said. “This is about balancing various considerations. We considered that what was most important was to get the code in a timely manner.”

Lawford indicated that there were many flaws in the code. He noted, among various points, that it would allow ISPs to change the price of internet service during the duration of the contract because discounts or promotions are permitted to be part of the “price.” He said that the code provides no cap on data overage charges and ISPs are only required to notify customers when their data usage reaches a certain threshold.

Scott indicated that if the CRTC had delayed the decision by three or four months, which some requested for, then the timeframe would “fall with an election writ.”

“We were aware of what the most telling issues were, we also had over 600 individual submissions and we had a number of consumer organizations that did participate, as well as arms of the provincial government,” Scott said. “So I am satisfied with the record, absolutely we have the necessary record to develop the code and bring it in place.”

Lawford questioned the rush in releasing the code before an election.

“Does he work to make sure this present government gets reelected? Why is he rushing to get it out before an election?” he questioned. “That’s the best question because theoretically if he is going off his quote-unquote fabulous record, it shouldn’t matter who is in power. It should be the best code ever not horrible. I don’t know what to do with this thing,” said Lawford.

OpenMedia’s executive director Laura Tribe echoed Lawford’s sentiments. She said by rushing the proceeding the “actual result was that the public interest was simply underrepresented, and it shows.”

“The clearest example is that one of the single-greatest problems sparking the need for this kind of code wasn’t even addressed: the predatory bait and switch sales tactics being used to lure customers into expensive contracts with significant cancellation penalties,” Tribe said.

While the code gives customers 45 days to cancel their contract without a penalty if they feel they’ve been misled, Tribe said this is “inherently punitive to the customers, who if they’ve been given a different contract than they agreed to, are now forced to cancel and live without internet services on short notice.”

“Why aren’t the ISPs being required to live up to the original promises? Why are customers the only ones paying the price for being misled?” she questioned.

Tribe added that the process will require customers who have been wronged to individually file their complaints with the Commission for Complaints for Telecom-television Services (CCTS), which will require significant time and lots of documentation.

“Yet there are absolutely no systemic penalties to the ISPs for their well-documented patterns of bad behaviour. This is the core issue that Canada’s largest ISPs are not being held accountable for — the patterns of lying to, and deceiving, customers,” she said. “Without significant penalties for these behaviours, we will only see more of the status quo.”

Byron Holland, president and CEO at the Canadian Internet Registration Authority, welcomed the code and stressed that Canadians should have the right to know what they’re getting for their money.

“We hope this new code of conduct will make their contracts easier to understand. While it should help address the rising number of consumer complaints in the short term, we believe that the best long-term solution is greater competition and consumer choice in Canada’s telecommunications sector,” he said.

A Rogers spokesperson said in an email that the company “welcomes the Internet Code as it promotes clarity, and ensures consumers are better informed of their rights and responsibilities.” The spokesperson added, “we are thoroughly reviewing today’s decision.”

Bell, Videotron, Cogeco, and Xplornet were still reviewing the extensive document and did not have a comment at the time of publication of this story. The carriers indicated they will be releasing statements shortly.

Telus’ president of home and small business solutions Zainul Mawji said in a statement that the CRTC provided a “balanced code that will protect customers while supporting necessary network innovations and investments.”

“The CRTC’s Internet Code introduces a number of practices that have long been in place at Telus,” Mawji said.

A SaskTel spokesperson said it will “work diligently to comply with all elements of the Internet Code.”

“In terms of the details of the decision, we continue to believe that the CRTC should focus on dealing with those ISP’s that may be engaging in inappropriate behavior rather than regulate all the larger players,” the spokesperson said. “SaskTel believes in letting the marketplaces function, thereby avoiding the hidden costs of regulation that ultimately consumers end up paying.”

Update 01/08/19: The article was updated with quotes from SaskTel.