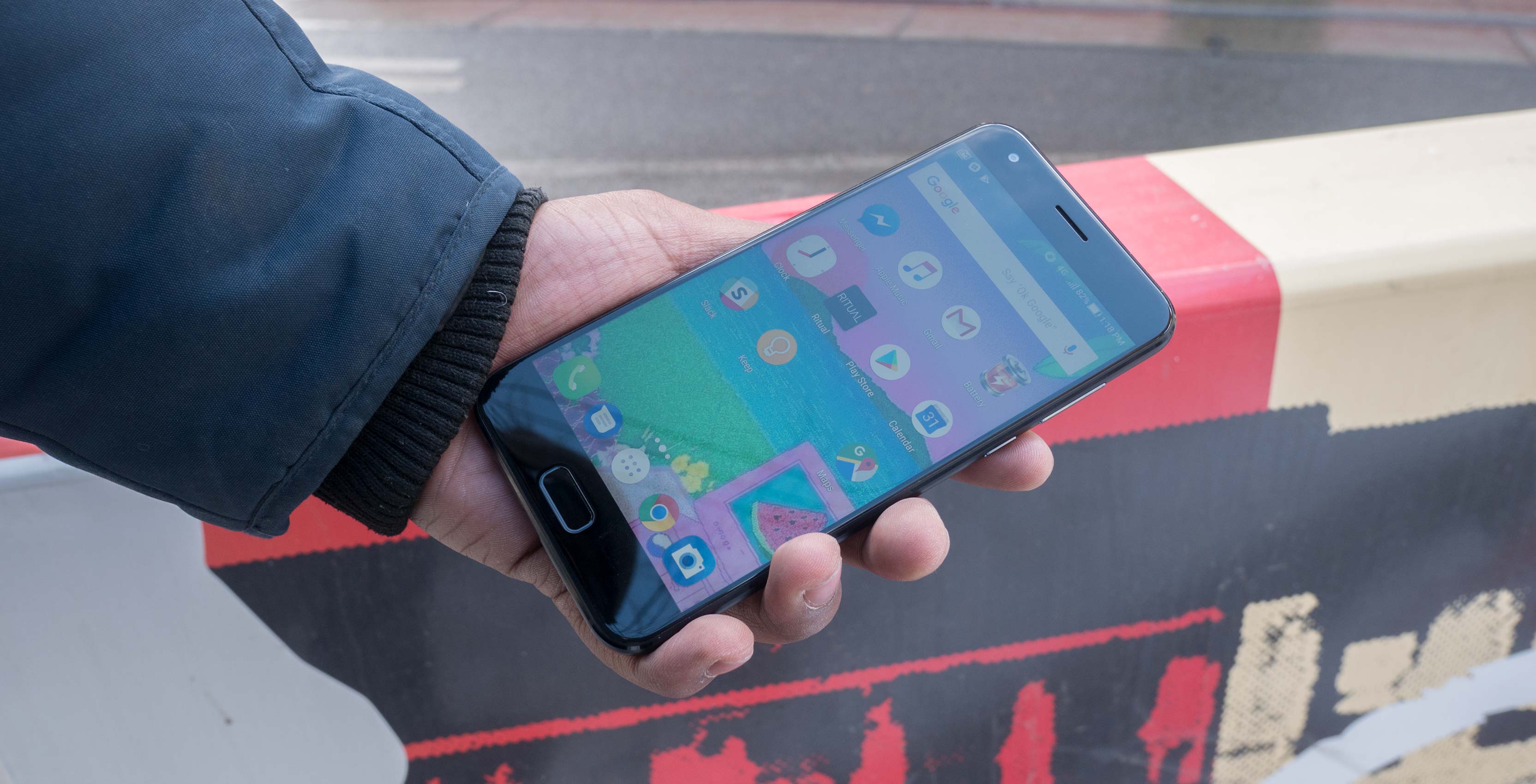 Asus may not be a major brand name in mobile, but what it’s bringing to the mid-range smartphone market shouldn’t go unrecognized.

Over the past few generations of ZenFone smartphones, the company has consistently nailed the camera experience, releasing cameras with great low-light shooting and quick autofocus.

What’s more, Asus’ mid-range smartphones have routinely wowed me when it comes to battery life.

The ZenFone 4 proudly upholds these traditions, and as a bonus, it looks better than any previous Asus smartphone — even if it continues to be a bit outdated.

Meanwhile, the brand’s ZenFone 4 Pro offers marginal improvements on the strengths of the ZenFone 4, but for most consumers the boost in power won’t be worth the uptick in price. 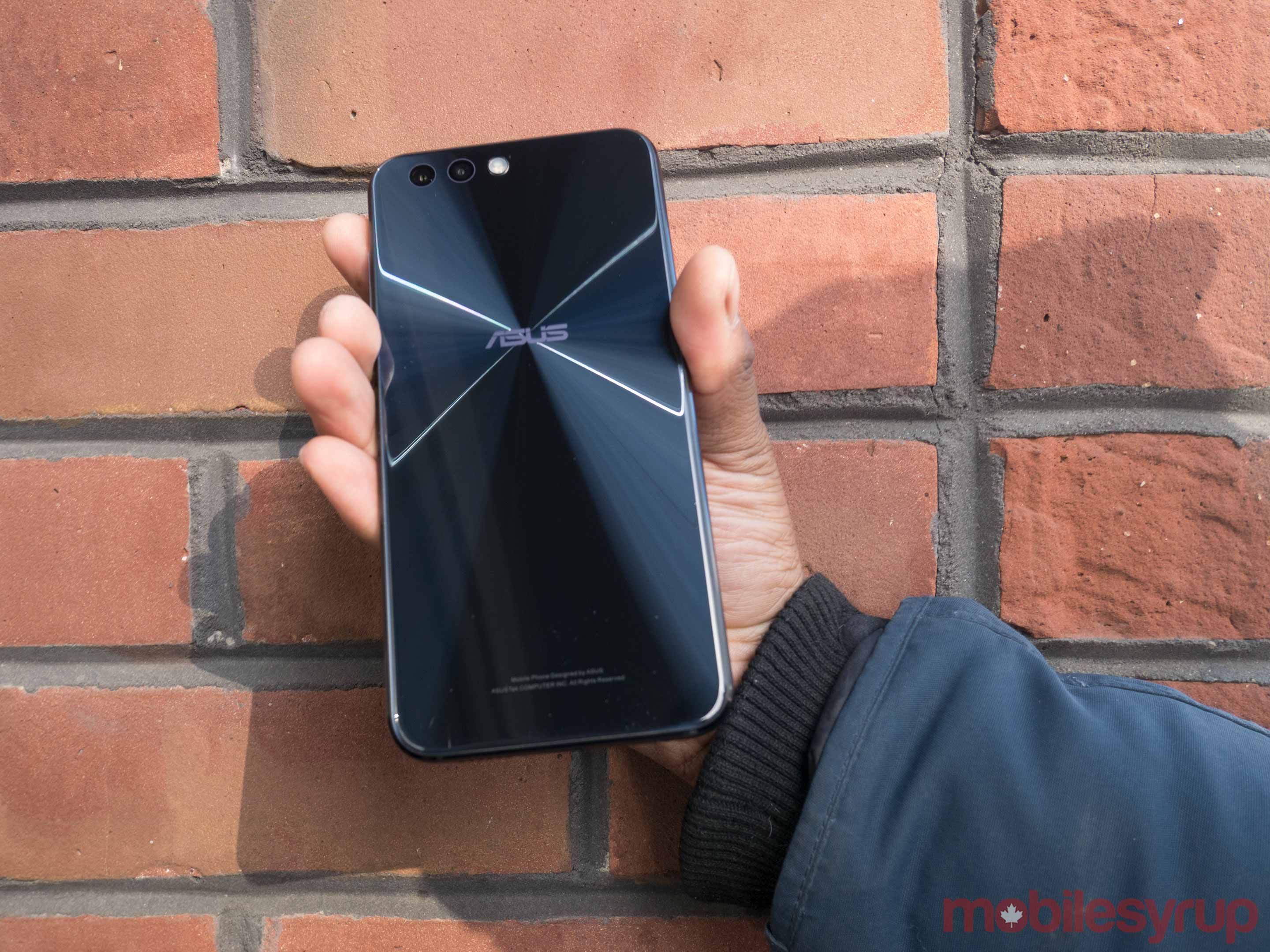 The ZenFone 4 is notably more elegant than last year’s iteration. It features less blocky, harsh lines and no silver accent on the chamfered edges. The Asus logo is subtler, and the dual cameras on the rear sit flush with the back panel. It’s still got a bit of flash through, with a noticeable starburst effect on the rear that adds a unique touch.

Overall, it’s a handsome redesign, but unfortunately, it’s still about a generation behind the times with its 16:9 aspect ratio display and increasingly rare front-facing fingerprint sensor.

Don’t get me wrong — I appreciate the fingerprint sensor and physical navigation buttons. Until fingerprint sensors embedded under displays become commonplace it’s simply the most logical position for small-handed users. But I’ll admit the display lacks the wow factor of an 18:9 aspect ration.

Still, the display is nearly edge-to-edge on the sides, providing a decent amount of real estate. My larger issue is screen dimness. Asus promises 600 nits (close to what the iPhone X can hit), but in reality it appeared much dimmer than that, especially in outdoor light.

As for inputs, the ZenFone 4 features a dual SIM slot, one of which can also be used for microSD expansion. There’s a single, surprisingly powerful bottom-firing speak on the bottom edge of the device and a headphone jack that delivers sound via a high-res audio 192kHz/24-bit standard that Asus says is “four times better than CD quality.”

Though it’s been a while since I’ve experienced CD quality, I will say I was impressed by the clear and well-articulated sound delivered through my B&O Play earbuds. 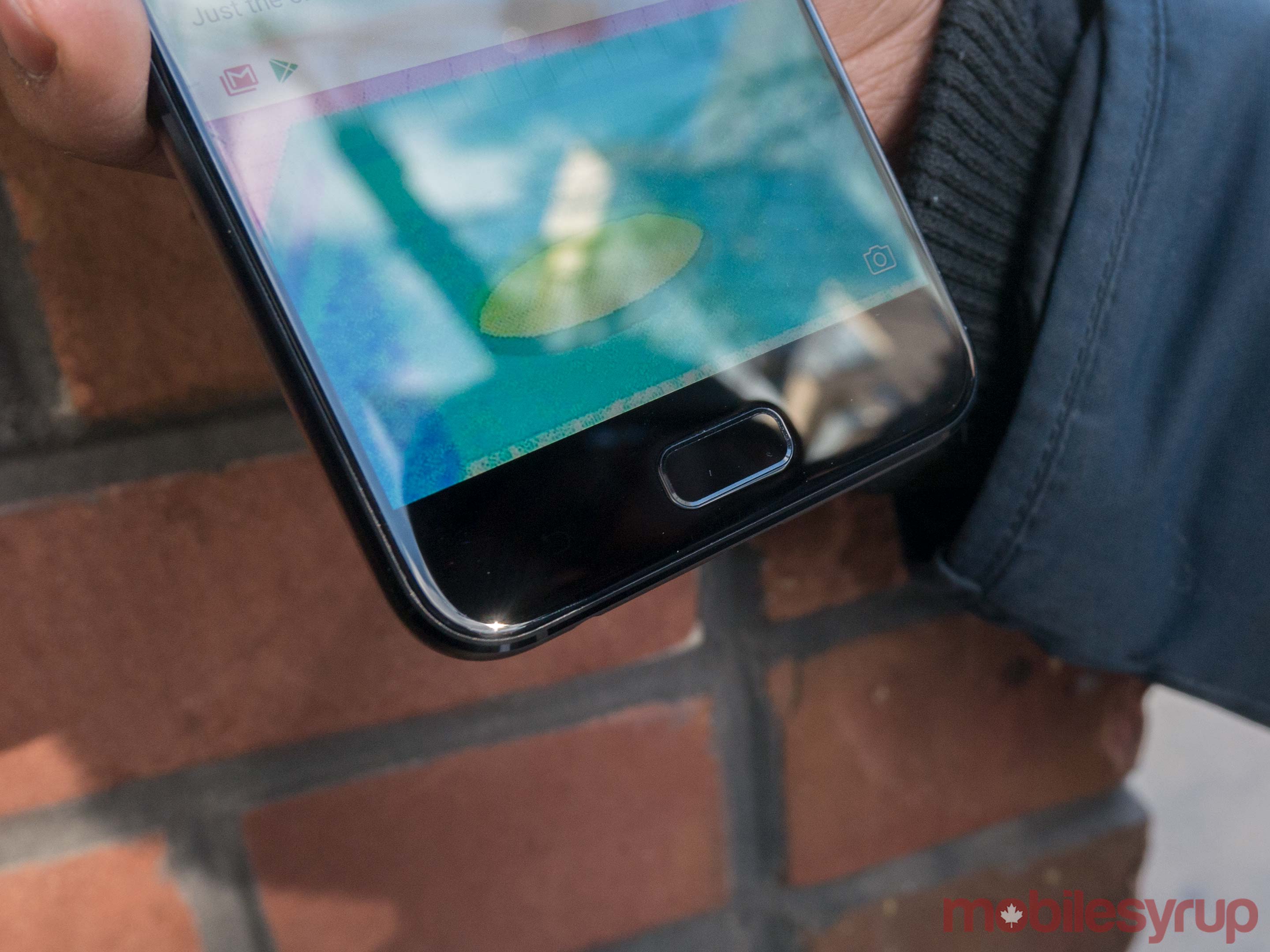 Running on the octa-core Snapdragon 630 chipset with 4GB of RAM, the device is no mobile gaming powerhouse, but is consistently zippy for most everyday multi-tasking needs.

In fact, while load times for games were occasionally on the long side, the phone never featured noticeable lag, and I experienced no random app shutdowns during my several weeks with the phone.

On top of that, even when demanding a fair amount from it — over an hour of Netflix streaming or mobile gaming, for instance — the handset didn’t overheat. It got a bit warm, but wasn’t at all uncomfortable to hold and never surpassed 40 degrees Celsius.

In the storage department, the ZenFone 4 includes a 64GB base expandable by microSD and comes with 100GB of free Google Drive space for one year, regularly $2.79 CAD per month.

As for connectivity, the ZenFone 4 does not support Band 66, which makes it less than ideal for use on Freedom Mobile’s network. The phone will work on the bands used by Canada’s major LTE networks though.

Meanwhile, the ZenFone 4’s premium sibling, the ZenFone 4 Pro, runs on the Qualcomm Snapdragon 835 (which stocks the X16 modem capable of 1Gbps peak download speeds) and 6GB of RAM. This chipset and RAM combo powers up the device for gamers and anyone downloading significant amounts of content.

A camera setup that wows 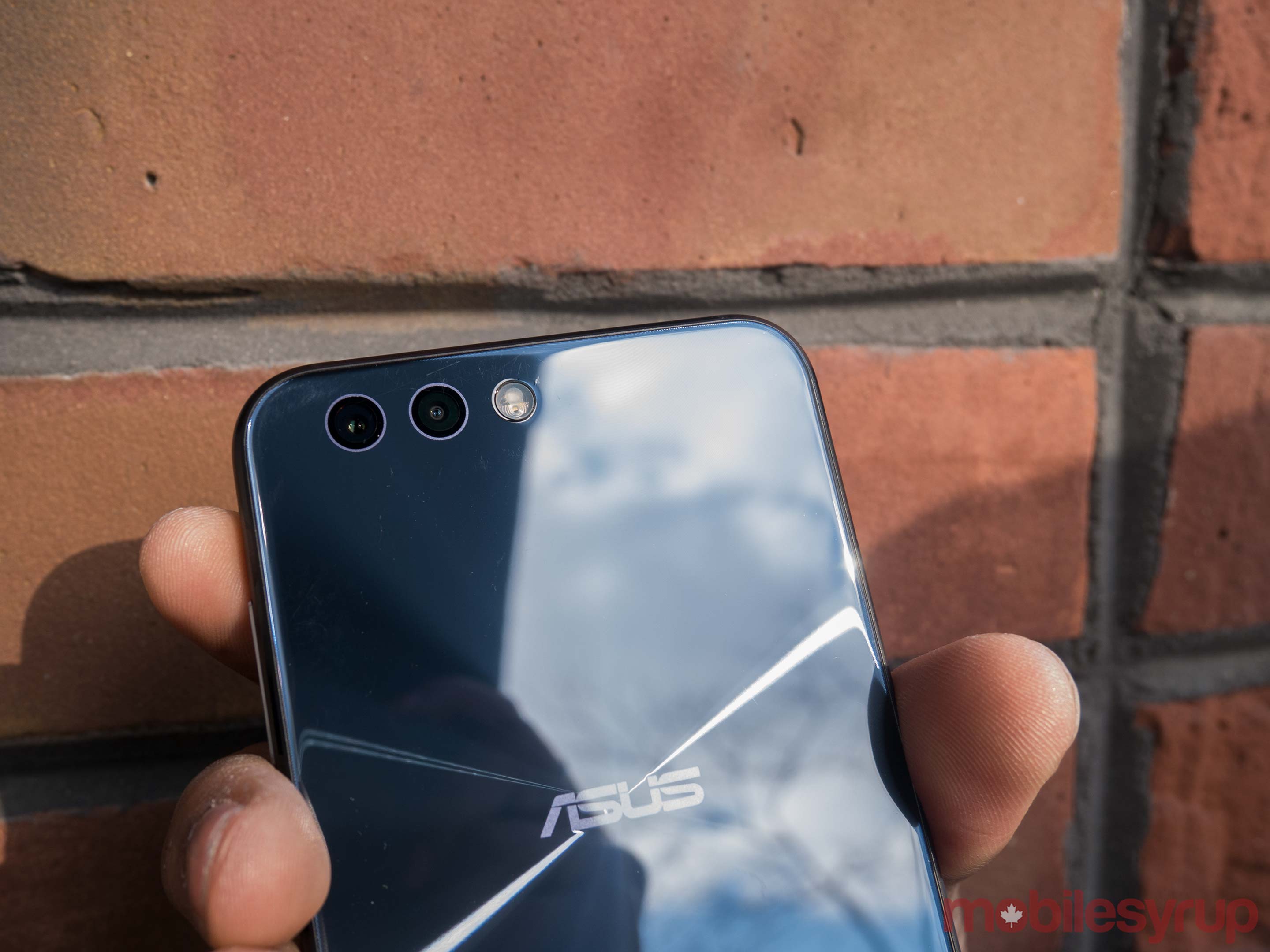 Camera performance is hands-down what impresses me most about Asus’ ZenFones.

With the ZenFone 4 and ZenFone 4 Pro, I was particularly impressed by the beautiful colour saturation of the images, the quickness and lack of blur in action shot capture and the light capture in low-light shooting.

Like Sony, it’s clear that Asus leans on software to do a fair amount of the work in producing gorgeous snaps, but it manages to do so in a generally less obtrusive way. I found fewer examples of over-sharpening and resulting artifacts marring the photo.

However, you can sometimes see evidence of over-processing with a bizarre ghost-like effect. This was more often the case, in my experience, with the ZenFone 4 Pro, though I also managed to get some stunning shots with that device. See examples of both below.

With the ZenFone 4, I found the level of high dynamic range impressive for a mid-range smartphone camera. Rarely does the shooter blow out a bright section of a photo and over-darken another. Photos taken in those stark contrasts are generally equally illuminated throughout, with strong, vibrant colours.

As mentioned above, low light performance is stellar for a phone in its price range. According to Asus, this is partially because it uses the Sony flagship IMX362 12-megapixel dual-pixel image sensor – with a 1.4µm pixel size, compared to the more typical 1.12µm pixel size.

And while it can sometimes be a little slow to launch, the camera setup’s auto-focus and shutter are fast, resulting in generally successful action shots.

One of the key differences between the ZenFone 4 and ZenFone 4 Pro’s camera setups is that the latter uses its dual-camera system for wide-angle shots, while the Pro uses it for 2x optical zoom. Personally, I find the wide-angle feature more useful, as it allows you to squeeze more into any given shot.

As for other interesting camera features, the ZenFone 4 can save pictures in RAW in pro mode, which is useful for professional editing. The camera also features a GIF animation mode, time lapse feature and can record 4K UHD video at 30 frames-per-second.

The selfie camera has an 84-degree field of view and takes adequately sharp and well-saturated pictures.

Up to two-day battery life 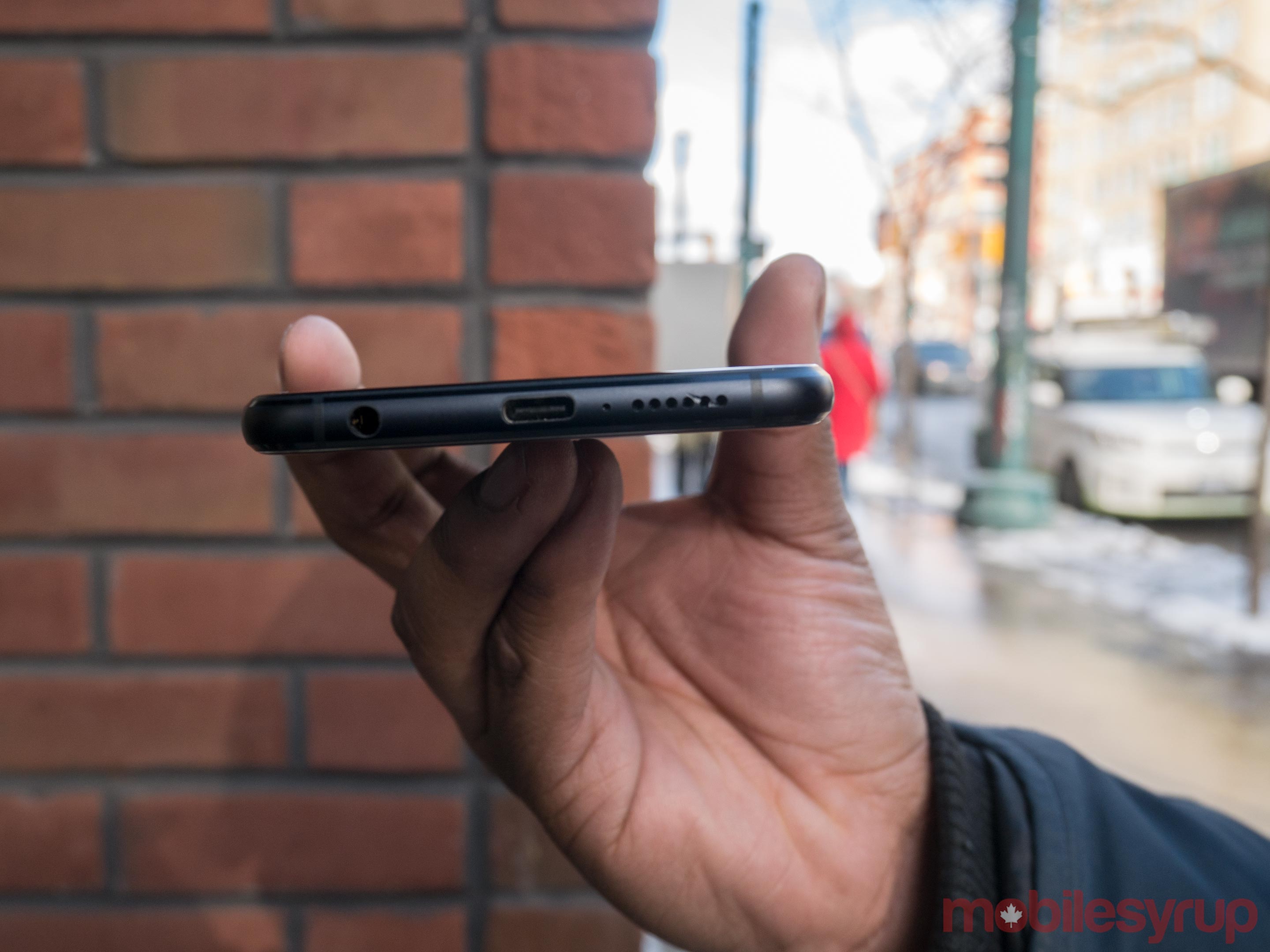 One of the main reasons to love a good mid-range device is multi-day battery life and the ZenFone 4 comes through on this — at least with medium usage.

The times where I’ve managed to eke out around 36 hours of battery life have been moderate usage days for me. I spent a couple hours each day of music streaming, made a few calls and spent another few hours of social media browsing.

Of course, days where you video chat, play games or stream content will drain the battery a lot faster, but even so, you’ll comfortably get 12 hours of use even with robust usage.

As for charging, it takes about an hour and a half to charge to full capacity. 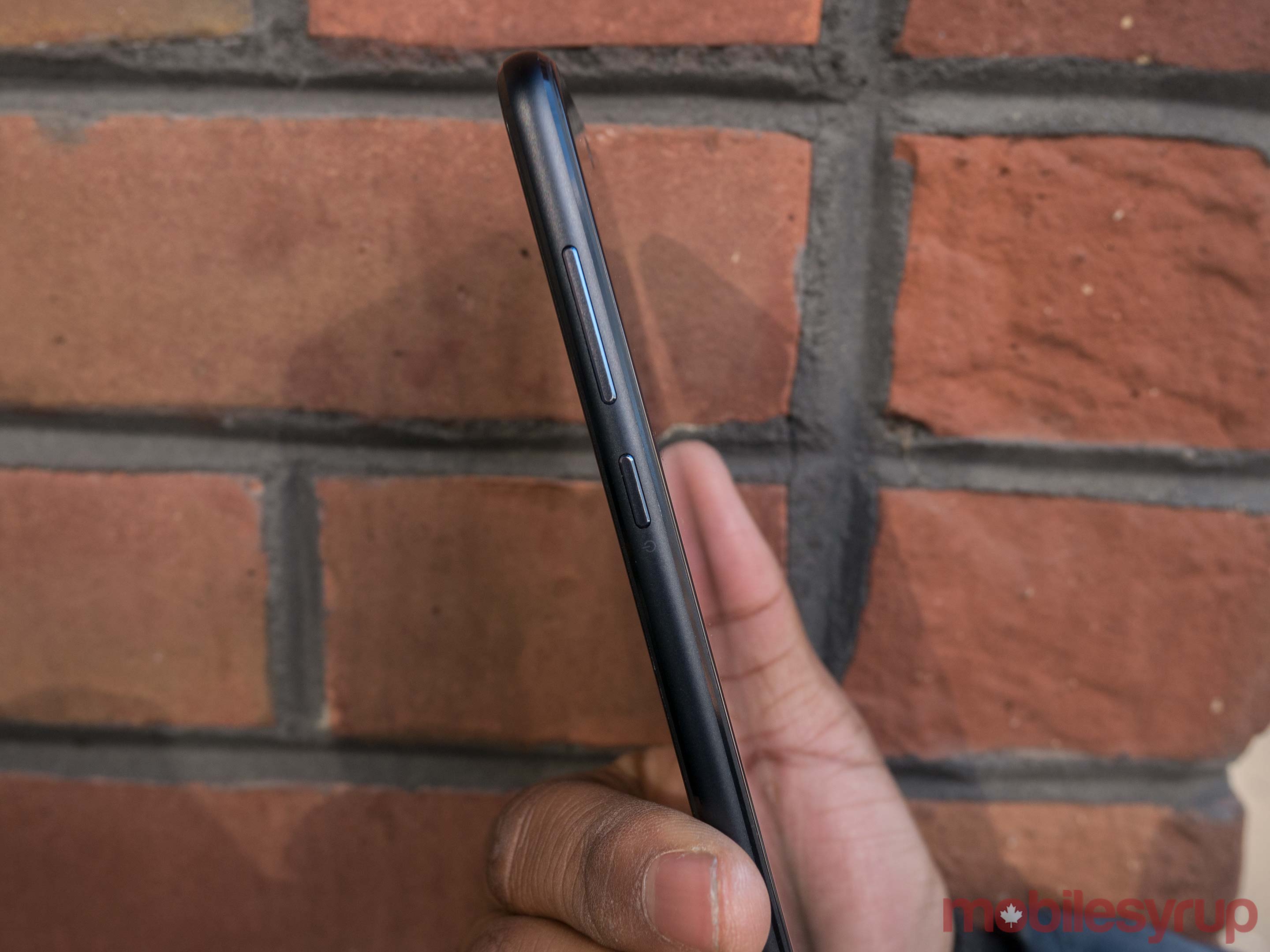 One of the things that tends to dissuade people from purchasing lesser known Android brands — whether they admit it or not — is the potentially strange and unintuitive layer of customization, or skin.

There’s no point denying it: Asus’ skin is quite different from the stock version of Android 8.0 that it overlays, and that’s not to its advantage. It lacks many of the useful flourishes of Android on the Google Pixels and features a decent amount of bloatware (there are 20 pre-installed Asus apps ranging from useful to exceedingly pointless).

Still, it’s not much of a hinderance. A bit of uninstalling and downloading of key Google apps like the Google Now Launcher and Gboard make it more than palatable.

Prospective buyers shouldn’t let Asus’ Android skin figure too highly into their purchasing decision – it’s more or less as quirky as any other non-Google Android device.

At $550 CAD, the ZenFone 4 is solidly mid-range, occupying an increasingly shrinking area of the overall market. Perhaps one of its main competitors in the bracket — due mostly to carrier support — is the Samsung A5 (2017), which can be purchased outright for $470.

Samsung devices are known for strong camera performance, particularly in low light, and reliably zippy processing. In my experience with the device, I also noted its attractive, waterproof design and vibrant Super AMOLED display.

In pretty much all aspects, however, the newer ZenFone 4 is more impressive. The A5 features 3GB of RAM, 32GB of base storage, only one 16-megapixel camera, a 3,000mAh battery and it’s currently running Android 7.0.

The modular Moto Z2 Play is also a competitor, but costs between $700$ and $800 at carriers and has outdated specs compared to the ZenFone 4.

Other devices that may attract the same base and can be purchased online include the OnePlus 5 and 5T – premium devices with a close-to-premium price point, and the ZTE Axon 7, which is $500 but now end-of-life (the Axon 8 has yet to be announced). The Axon 7 features the Snapdragon 820 and 4GB of RAM.

As for comparing it against its premium sibling, the Asus ZenFone 4 Pro, unless you’re an avid mobile gamer there’s not much of an argument to be made for the Pro. At $900 outright, it costs $350 more than the ZenFone 4, but doesn’t have an updated design and features a camera that’s impressive, but sometimes not reliable.

The ZenFone 4 marks yet another quality addition to Asus’s ZenFone line. While its lack of carrier support may mean it’s destined to remain an obscure brand for most consumers, those seeking quality inexpensive options online would do well to consider this handset.

I was sincerely impressed by its camera performance, battery life and reliability. At $550, it’s a steal.

"I was sincerely impressed by its camera performance, battery life and reliability."