Marvel vs. Capcom: Infinite — Hidden Brilliance [This Week in Gaming] 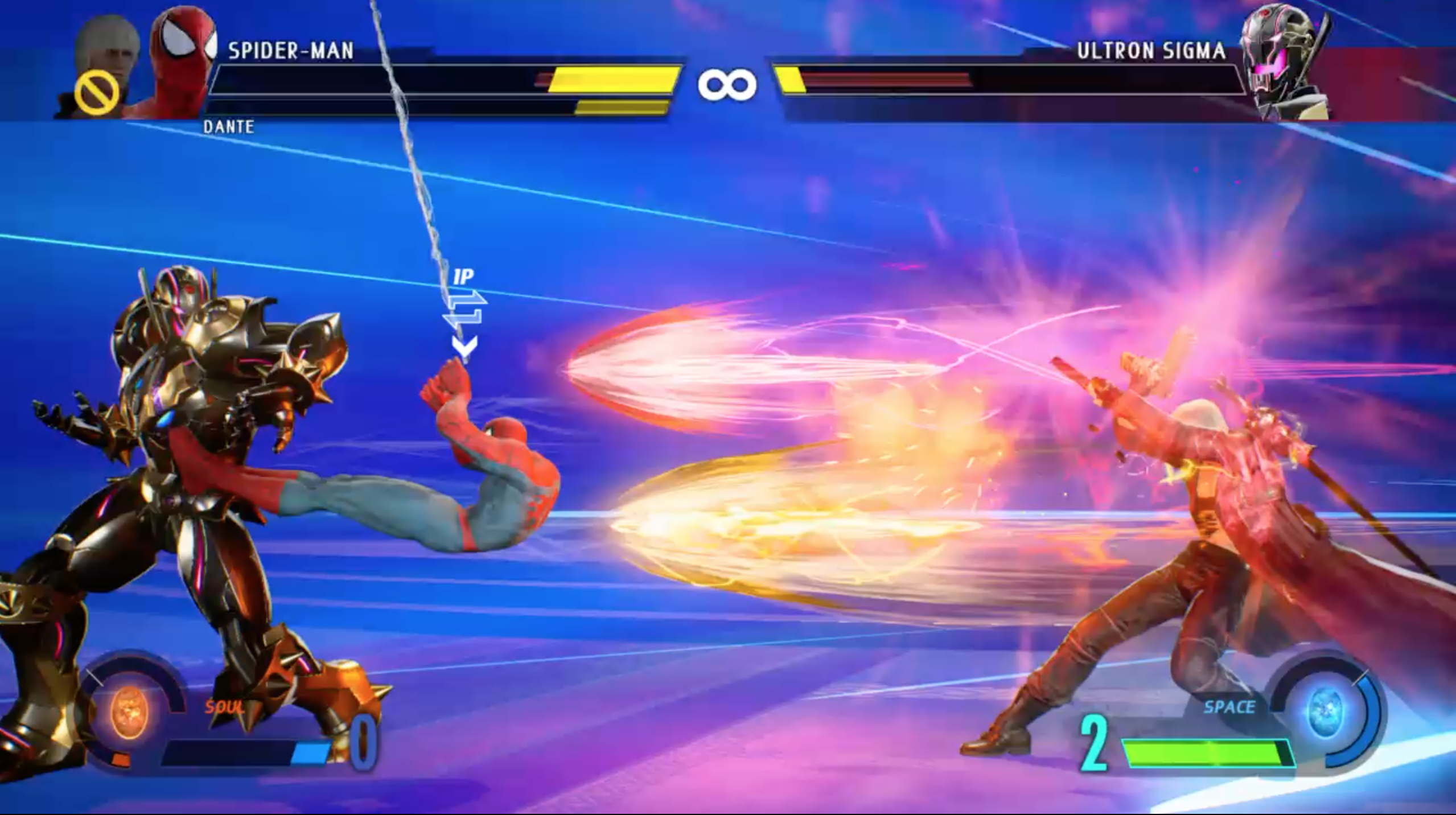 When Marvel vs. Capcom: Infinite was announced at PlayStation Experience last December, I was initially overjoyed.

Some of my fondest gaming memories include pouring in quarter after quarter in the arcade at Toronto’s Woodbine Mall to play Marvel vs. Capcom 2.

Later in my life, I got dozens of hours of fun out of 2011’s Marvel vs. Capcom 3: Fate of Two Worlds on the then-current generation PS3 and Xbox 360 systems, which enabled me to play online with friends and random people alike — groundbreaking for the series at the time.

But soon after its announcement, it seemed like something was off about Infinite  — the art style looked unappealing, the roster was shaping up to be underwhelming and the new story mode seemed half-baked. Moreover, it was following this year’s seminal Injustice 2, which set the bar for crossover superhero fighting games.

With all that said, I went into Infinite excited for another entry in one of my favourite series, but also apprehensive about how it looked in the months leading up to release. Thankfully, while some of the aforementioned problems do indeed bog the game down, there is an excellently crafted fighter hidden within — for those who give the game a chance.

The fate of two worlds

Marvel vs. Capcom: Infinite is notable for including the series’ first full-fledged cinematic story mode, doing away with the voiced-over stills that played at the end of Arcade Mode runs in Marvel vs. Capcom 3.

Infinite’s plot is centred around the Infinity Stones — six cosmic gems from the Marvel Universe that offer immense power to whoever wields them. Altogether, these are the Soul, Time, Power, Space, Reality and Mind Stones, which allow the user to manipulate different characteristics of existence, depending on their namesake.

Seeking greater power, Marvel’s villainous robot Ultron and Mega Man X‘s Sigma seize the Space and Reality Stones to collapse the Marvel and Capcom universes into one, shared world. The Stones also allow the pair to merge together to form the all-powerful Ultron Sigma, which uses its newfound power to amass an army of robots and brainwashed Asgardian warriors. To stop Ultron Sigma, Marvel and Capcom heroes alike are forced to put aside their differences and join forces.

“It feels like a grand ol’ Avengers comic crossover adventure from the ’80s.”

It’s a typical sort of premise for a crossover event, which is fine, as it’s necessary to bring the characters together. But perplexingly, Capcom decided that the story should kick off three months after the “Convergence” of the two worlds has actually taken place. Therefore, the player is robbed of seeing the cataclysmic event actually unfold, as well as the resulting first encounters between the Marvel and Capcom characters, which is often a highlight of franchise crossovers. By the time Infinite begins, everyone is already on a first-name basis with one another.

Nonetheless, there are still some genuinely entertaining moments between characters. Devil May Cry‘s ever-charming Dante sharing his signature Ebony and Ivory handguns with the equally gun-happy Rocket Raccoon is a great bit. Likewise, the towering and sturdy Thor and miniature Ghosts n’ Goblins hero Arthur develop an endearing camaraderie over their shared valour and dedication to their respective kingdom. 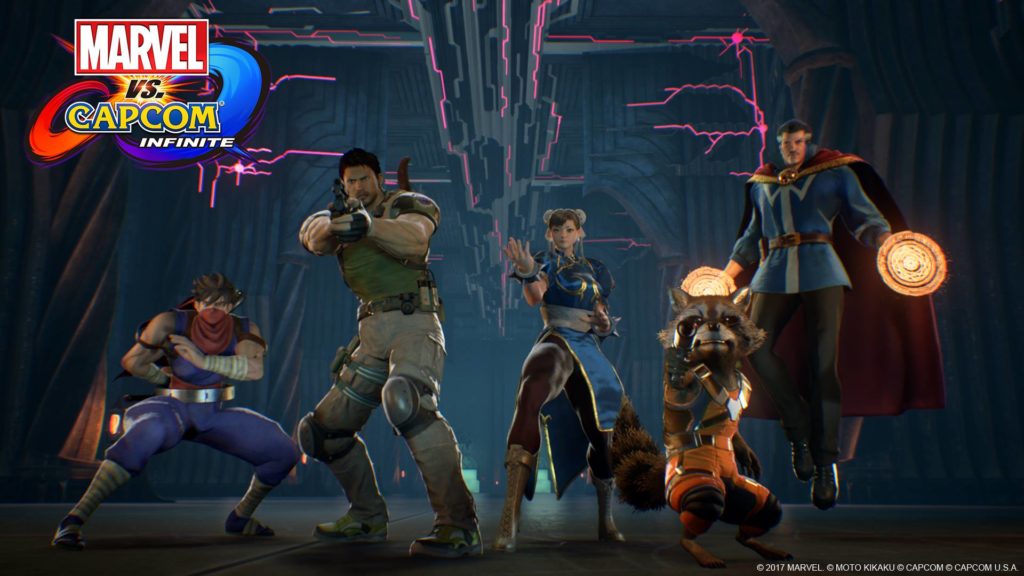 And that’s to say nothing of guest appearances from non-player characters, such as Mega Man‘s Doctor Light, who works out of Avengers Tower to offer his technical expertise to the heroes.

Overall, the story — while cliché-ridden and generic — is still a fun and mindless three-to-four-hour romp that’s worth playing through at least once. It feels like a grand ol’ Avengers comic crossover adventure from the ’80s. As well, taking a cue out of the Marvel Cinematic Universe movies, there’s also a great post-credits scene that paves the way for particularly intriguing future conflicts.

While the cinematics in the story mode feature some fun crossover action, they’re marred by some absolutely poor art direction. Some characters look fine, such as the more cartoony Mega Man and Arthur. But human characters, like Dante, Captain America and Ryu, can look quite awful, with faces more closely resembling knock-off toys you’d find in a flea market than the pop-culture icons you know and love.

The new art style simply looks too cheap and out of place in a current-generation 2017 game. Marvel vs. Capcom 3: Fate of Two Worlds was released over six years ago, yet it still looks great to this day thanks to a delightful cel-shaded comic book aesthetic.

In fact, the visuals in Infinite were such a source of controversy that Capcom had to release a day-one patch just to try to make Street Fighter‘s Chun-Li look less bizarre and off-putting. The fact that she, along with many of the other characters, still looks drab and counterfeit speaks volumes about the game’s woefully misguided art direction. 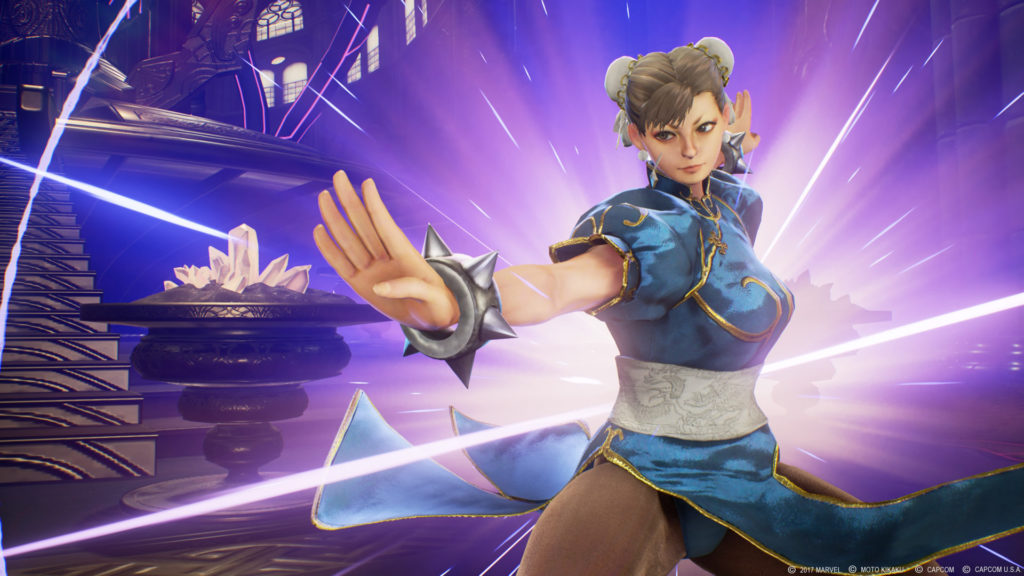 The voice actors are a mixed bag, too. Some fare better than others, such as the passable Robert Downey Jr.-impressionist who voices Tony Stark/Iron Man. Others sound as generic as they come — like Captain America and Ryu — while some are downright grating, like the loud-mouthed Rocket Raccoon.

The disappointing audio carries over to the soundtrack, which is forgettable and lacks the catchiness of previous games. “I Wanna Take You For a Ride,” anyone? Returning tracks haven’t fared much better, either, such as Dante’s awesome rock-infused theme, which is now featured as part of a far inferior remix.

Music, art direction, story and visuals aside, Marvel vs. Capcom: Infinite is, first and foremost, a fighting game. So, in spite of any previously mentioned issues, it’s essential to note that the central mechanics are uniformly excellent. Interestingly, this is in spite of the fact that Infinite boldly eschews some of the series’ long-running staples.

Gone is the traditional 3v3 style combat, now replaced with 2-on-2 battles. Additionally, you’ll no longer be able to tap a trigger button for a quick assist as you would in previous games. Instead, a tag-based system is now in effect, meaning that your characters sub-in for one another, rather than briefly appearing to lend a hand.

However, characters will only leave the field once they have finished executing their current actions — which leaves significant team attack-unleashing potential. In other words, you could have Dante launch your opponent into the air using a stylish sword-and-gun barrage, switch out to Spider-Man mid-combo to juggle the enemy in the air, then knock him back to the ground so Dante can finish the chain. 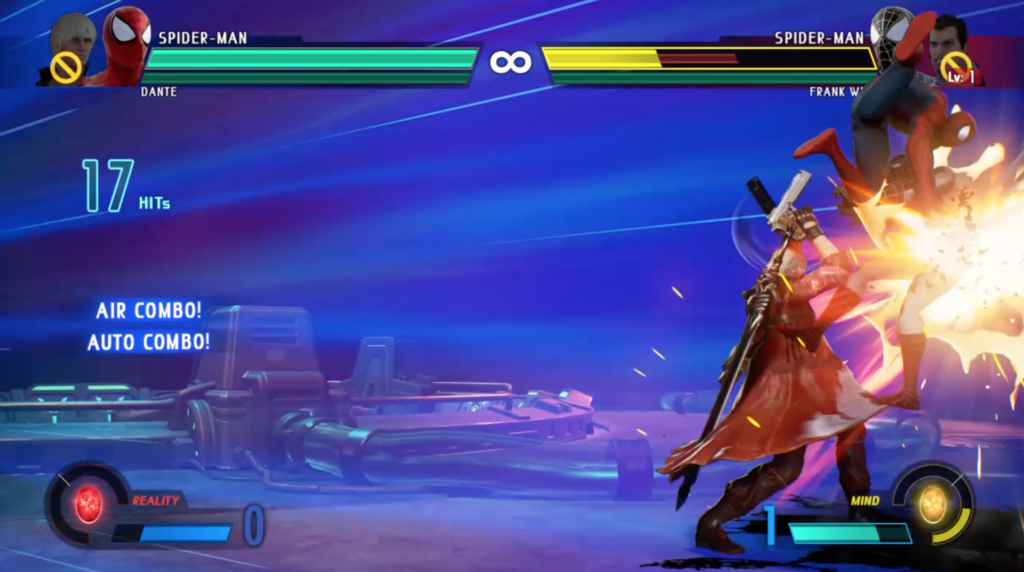 Outside of the plot, the aforementioned Infinity Stones also play a pivotal role in combat. In a way, the Stones serve as a third member of your party. In addition to choosing your two fighters, you can choose to equip one of the six Infinity Stones, all of which carry unique in-battle benefits. The Power Stone, for example, will allow you to perform a quick-but-strong knockback move. Meanwhile, the Soul Stone saps a small part of the enemy’s health.

“The character and Infinity Stone combinations offer endless amounts of depth and versatility.”

The Stones also have a secondary ability, which is much more powerful. An Infinity metre fills up the more you use the Stones or take damage; once full, you’ll be able to activate an Infinity Surge, giving you the complete power of the Stone you have equipped. For example, the Power Stone will temporarily increase your damage output — not unlike the X-Factor ability from MvC3 — while the Soul Stone can be used to revive a fallen ally. 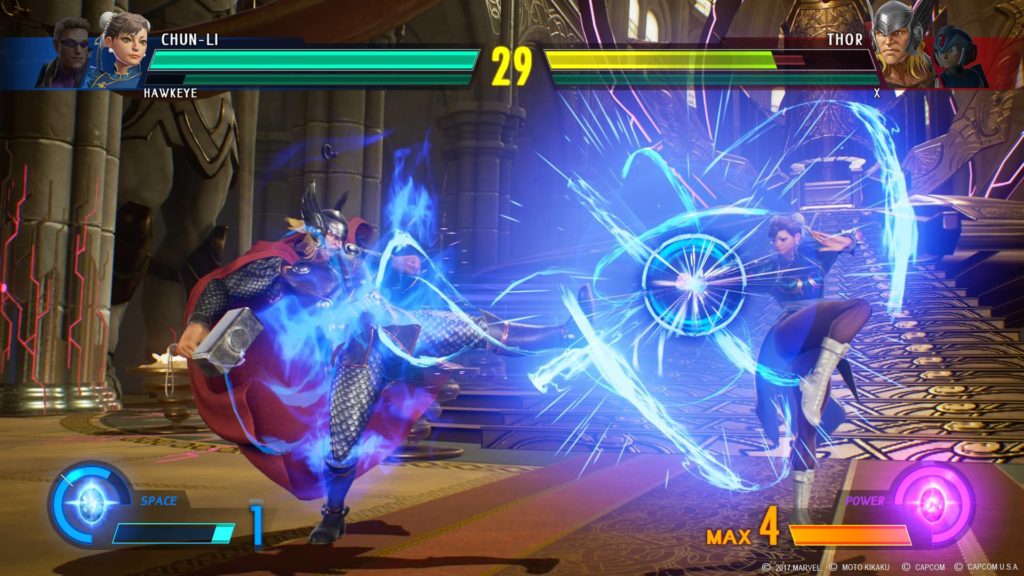 With all of this in mind, the Infinity Stones add a layer of depth and strategy to the mix. You may want to equip a Space Stone — which pulls enemies towards you — when going up against ranged fighters like the bow-wielding Hawkeye or supernatural Morrigan and Dormammu.

On the other hand, the Power Stone’s knockback effect may make the difference between victory and defeat during a fight with an up-close heavy hitter like the Hulk. The character and Infinity Stone combinations offer endless amounts of depth and versatility, making fights appropriately frenetic and skill-based.

Similar to in Marvel vs. Capcom 3, there is also a system in place to lend a helping hand to less skilled players. Certain combos are able to be performed more easily with simplified command inputs. Fighting game veterans needn’t fret, though — these ‘Auto’ combos do less damage, making it a well-designed system that can cater to both groups of players.

It’s a good thing that Infinite‘s core fighting is so polished, because it’ll help you forget that the roster as a whole is lacking. But make no mistake — it’s a significant problem, for multiple reasons. Since the announcement of Marvel vs. Capcom: Infinite, there’s been one rather gargantuan-sized elephant in the room — where are the X-Men?

Indeed, none of the Marvel characters whose film rights are held by 20th Century Fox — including the Fantastic Four — have made their way into Infinite. Which is to say, the likes of Wolverine, Storm, Magneto, Deadpool and Doctor Doom are all sadly missing from Infinite‘s ranks. 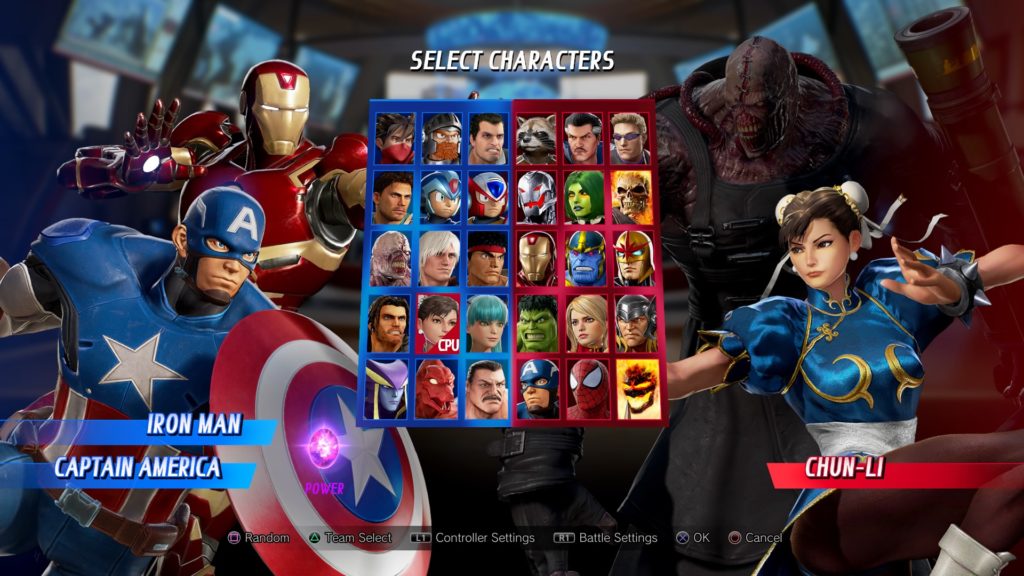 It’s deeply disappointing that, seemingly out of ongoing pettiness over a movie rights conflict with Fox, Marvel has prevented some of its most iconic and beloved characters from returning to the venerable fighting game series.

“Marvel vs. Capcom exists in part because of the X-Men, so to have them absent from the series’ next big entry just feels plain wrong.”

This is particularly egregious in a crossover title that’s supposed to feature a “who’s-who” of Marvel characters. In fact, the entire concept of a Marvel-Capcom crossover was first introduced with the mutant heroes in 1996’s X-Men vs. Street Fighter. Marvel vs. Capcom exists in part because of the X-Men, so to have them absent from the series’ next big entry just feels plain wrong. Even the producers have had a hard time justifying their exclusion, making the flimsy excuse that modern Marvel fans “don’t remember” the X-Men the way they do the Guardians of the Galaxy or Black Panther.

But even ignoring these glaring character omissions, the roster is still somewhat lacklustre. Twenty-four out of the 30 fighters in Infinite‘s lineup were also in Ultimate Marvel vs. Capcom 3, with the remaining six being actual newcomers to the franchise: Marvel’s Gamora, Captain Marvel and Ultron, and Capcom’s Sigma, Mega Man X and Jedah.

And yet, Sigma isn’t currently playable. He’s part of an upcoming wave of downloadable content that includes five other fighters — Marvel’s Black Panther, Black Widow, Venom and Winter Soldier, as well as a female avatar from Capcom’s Monster Hunter. 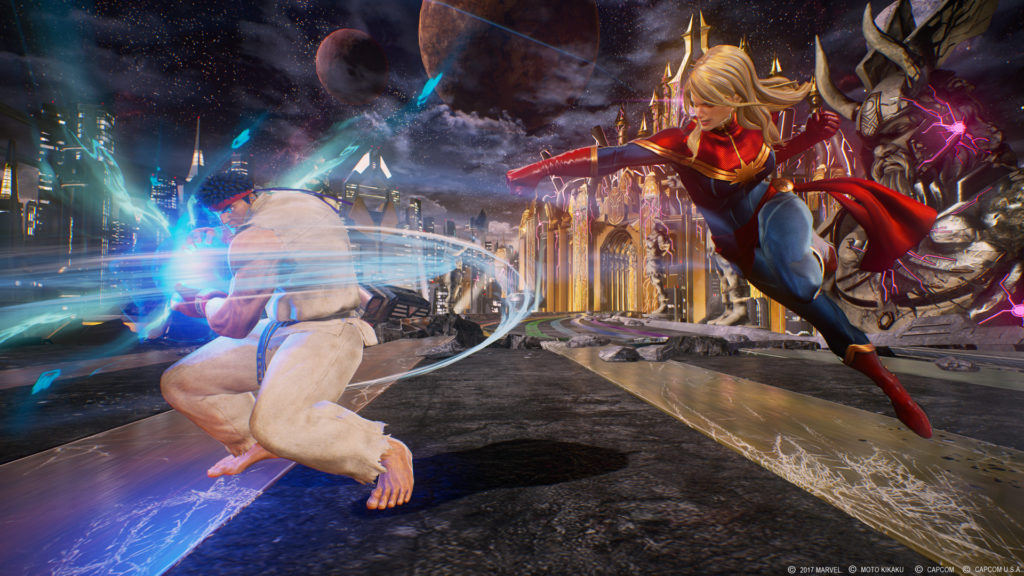 Still, while they might not be new to MvC, the characters that are in the game are well-designed and fun to use, especially in the context of Infinite‘s new gameplay systems.

It’s a shame that Marvel vs. Capcom: Infinite‘s presentation and roster leave much to be desired. These elements have become the driving force of the discussion about the game, to the point that everything else seems to have been ignored.

Yes, the art-style is incredibly ugly, and yes, the roster is missing a plethora of characters. These are notable issues, but fighting is what truly counts here, and the core systems in place are stellar. The 2v2 battles, Infinity Stones and character refinements truly change the course of battles, making each encounter feel dynamic, unique and a joy to play.

In the end, the ride may be bumpy, but it’s a thrilling one you’ll want to be taken on nonetheless.

Marvel vs. Capcom: Infinite is now available on PlayStation 4 (reviewed), Xbox One and PC at a suggested retail price of $79.99 CAD.