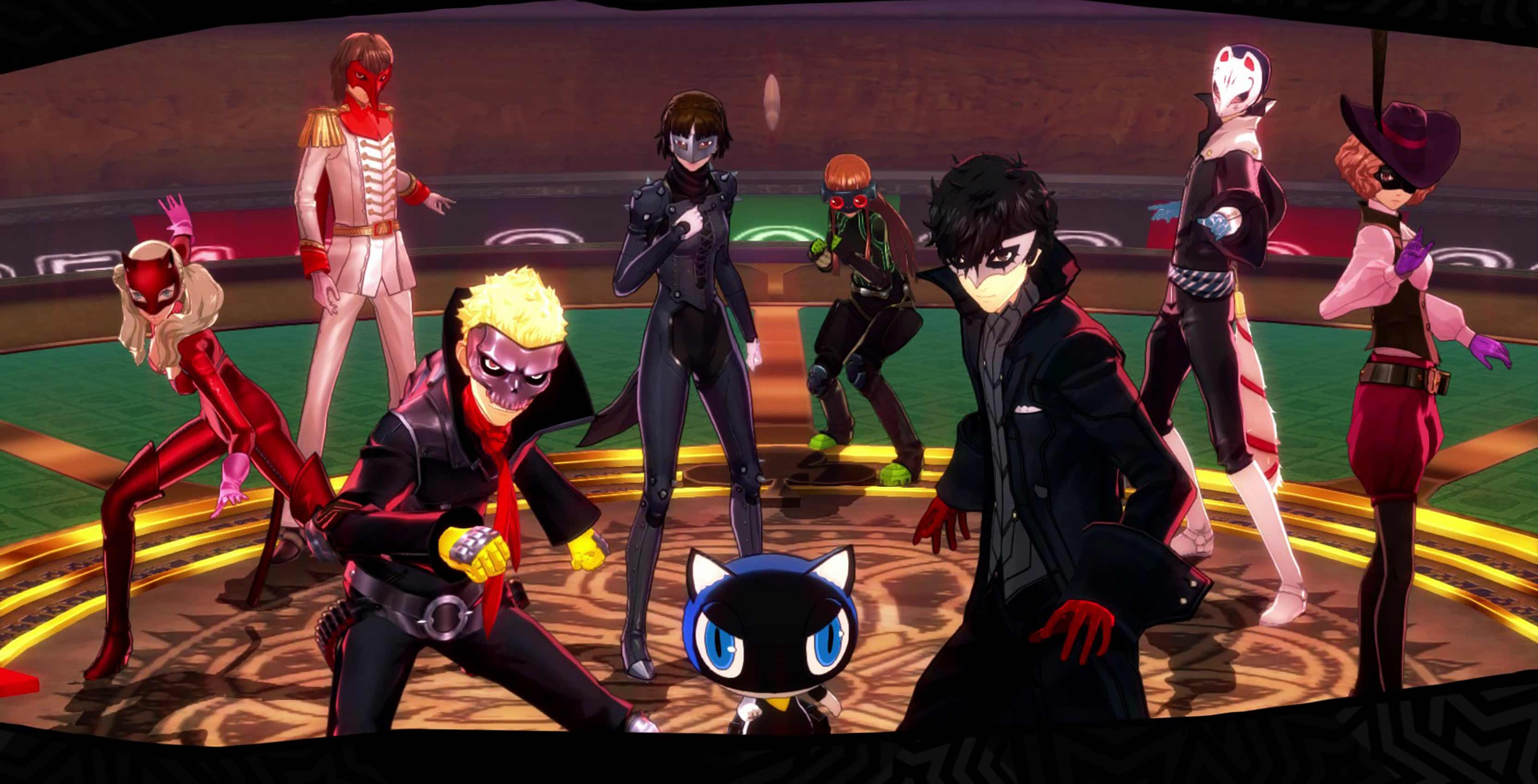 “Stop right there!” bellows an intimidating suited guard. He’s one of several men hot on your tail as you jump from rafter to rafter. Clad in a black cloak and court jester mask, you’re trying to escape a bustling vibrant casino with a briefcase that you’ve stolen.

A delightfully funky vocal track plays as a guard leaps in front of you, morphing into a grotesque creature that engages you in combat. After slashing at it a few times with your dagger, you twist, twirl, roll and then shoot him, smiling all the while. While this is only the first five minutes of Atlus’ Persona 5, it’s emblematic of my entire 117 hours with the game — a sublimely composed, expertly stylized and highly enthralling experience.

Adults are the worst

But how did you get to that casino and what went wrong? P5 doesn’t tell you right away. Instead, shortly afterward, you’re given a proper introduction to the player-named main character (also referred to as Joker), who is transferred to Shujin Academy after being wrongfully charged with assault. There, he’s placed under probation and put into the care of Sojiro, the cantankerous owner of a small-town café. Joker’s life is made difficult thanks to constant persecution by teens and adults alike over his past.

Needless to say, he doesn’t have a reason to be fond of people. As fate would have it, he soon falls into an alternate reality known as the Metaverse, which is made up of the cognitive desires of the people of Japan. Here, he finds out he has the ability to call forth a Persona, a powerful manifestation of his inner psyche. He later meets other Persona users who similarly feel outcasted and betrayed by society and together, they form the Phantom Thieves — a group of vigilantes who use their powers to reform those who are corrupted in Japan. 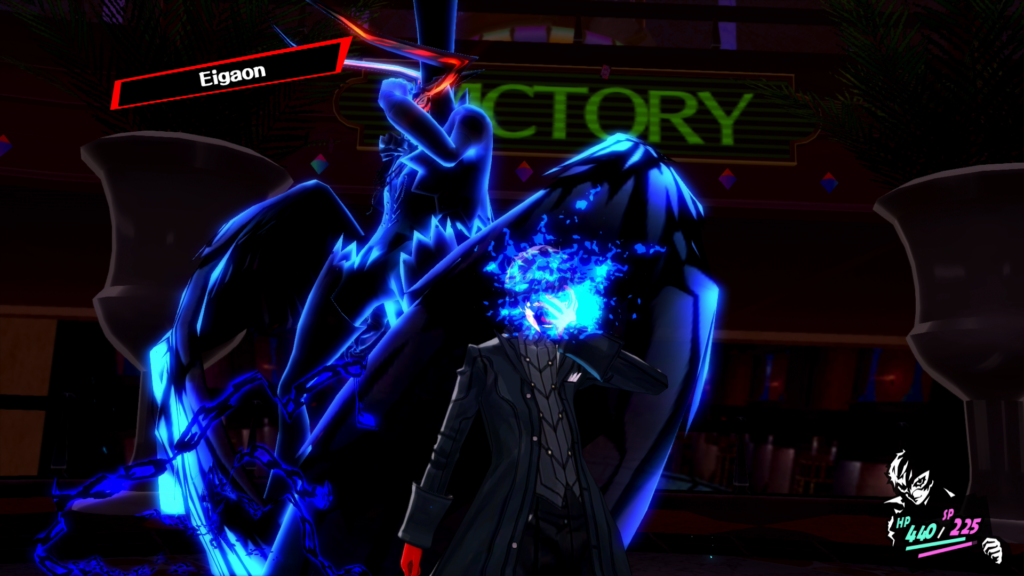 To do that, they’ll need to infiltrate their targets’ Palaces — massive Metaverse dungeons based off their innate desires and filled with powerful monsters. For example, the first villain, Kamoshida, is a teacher at Shujin Academy who is abusive towards students, particularly those on the sports teams. As a result, his Palace takes on the appearance of a castle, with the students assuming the roles of labouring servants. Over the course of the game, you’ll visit more than half a dozen Palaces (including the casino) which are all wonderfully varied in structure, puzzle design and enemy types.

Standing in the way, though, is the monstrous Shadows, which you’ll fight through P5’s excellent and stylish turn-based combat system. Battles are all about maximizing the amount of moves you can make in a given turn. With each successful exploitation of an enemy’s weakness (ranging from vulnerabilities to physical, elemental and gun-based attacks) that “downs” an enemy, a party member will receive a “1 More” bonus allowing for one additional action. From here, you can either attack once more or perform a “Baton Pass,” where you’ll switch over to another party member to take over, who will then receive a temporary stat boost to make the next move more effective. 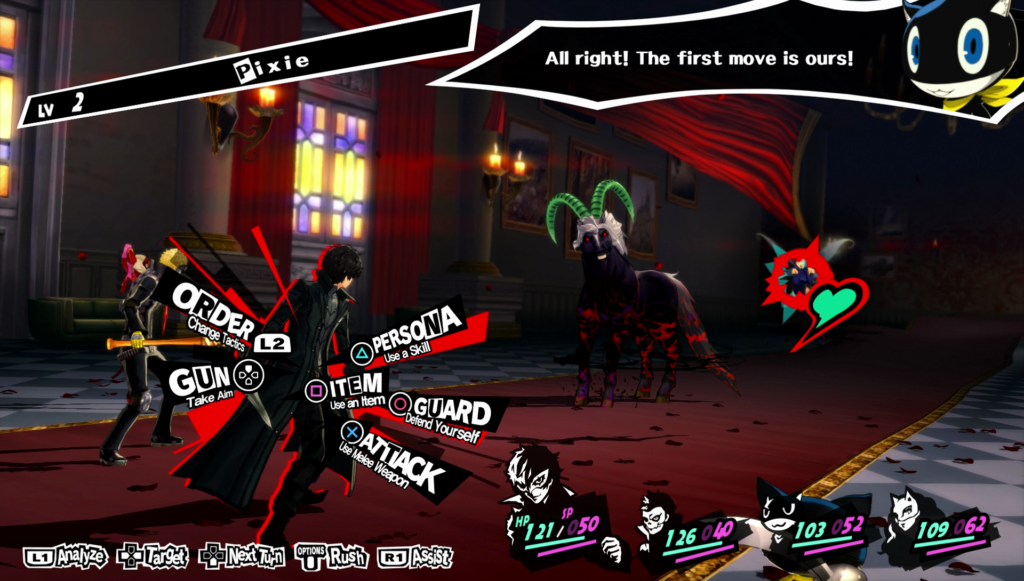 It’s important to note, though, that because Joker is the only character who can use multiple Personas, you’ll have to plan your moves accordingly. Your hot-headed teammate Ryuji, for example, can only use lightning-based magical attacks, so you may want to have him use a Baton Pass to switch to the bubbly Ann, whose Persona is fire-based. Likewise, you may need to switch to Joker, who is able to swap out Personas once per turn, which allows him a more flexible move set. Planning out your strategy and knowing when to adapt it is both essential and, when carried out effectively, can be incredibly rewarding.

If you manage to successfully down all enemies, you’ll be able to hold them all at gunpoint. From here, you can carry out an All-Out Attack, a gloriously flashy move that incorporates the entire party and hits all foes. For those who are more merciful, you can also ‘negotiate’ with a Persona to spare its life in exchange for having it join your roster or for it to drop money of a useful item. 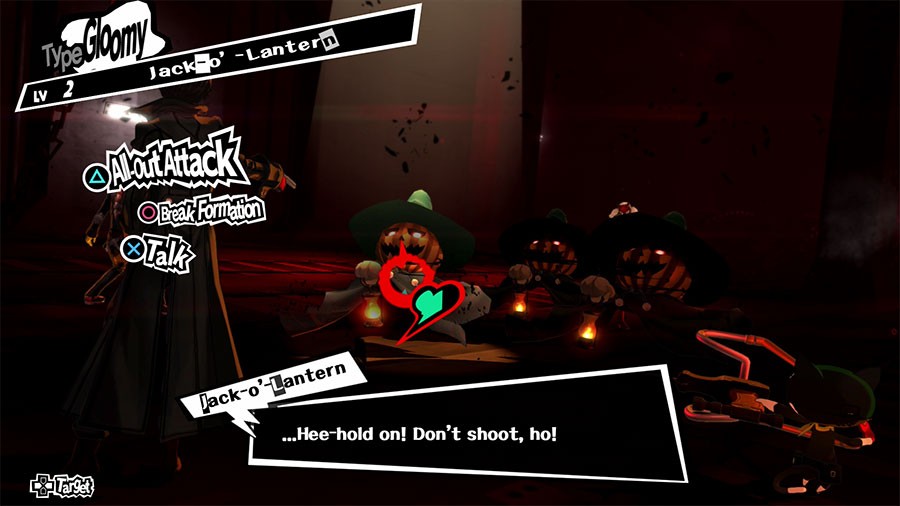 As you win more and more battles, Personas will level alongside you and learn abilities accordingly. You’ll also be able to fuse them together to create more powerful Personas, teach them new skills or sacrifice them to strengthen other monsters or yield useful items. Altogether, there’s a colourful assortment of over 200 Personas, including goblins, demons, knights, deities and more.

Normally, you’re given around three to four in-game weeks to complete a Palace before a deadline arrives before it’s Game Over. How you spend that time, though, is entirely up to you. Outside of Palaces, you’ll live out your (relatively) normal life as a high schooler. From Monday to Saturday you have class until midday, with your afternoons, evenings and all of Sundays free to yourself. During these times, you can get into all kinds of pastimes, including working a part-time job, shopping and spending time with other characters.

If you so choose, you can go in well-stocked with restorative items and clear a Palace as soon as possible, thus leaving the rest of the mission period to spend on Tokyo activities. On the other hand, if these dungeons — which can sometimes take several hours to complete — isn’t something you want to tackle all at once, you can work on infiltration incrementally, making some progress here and there in between spending time in the real world. Palaces must be entered in the afternoon, as returning to the real world from the Metaverse leaves the party fatigued and needing to rest for the night. 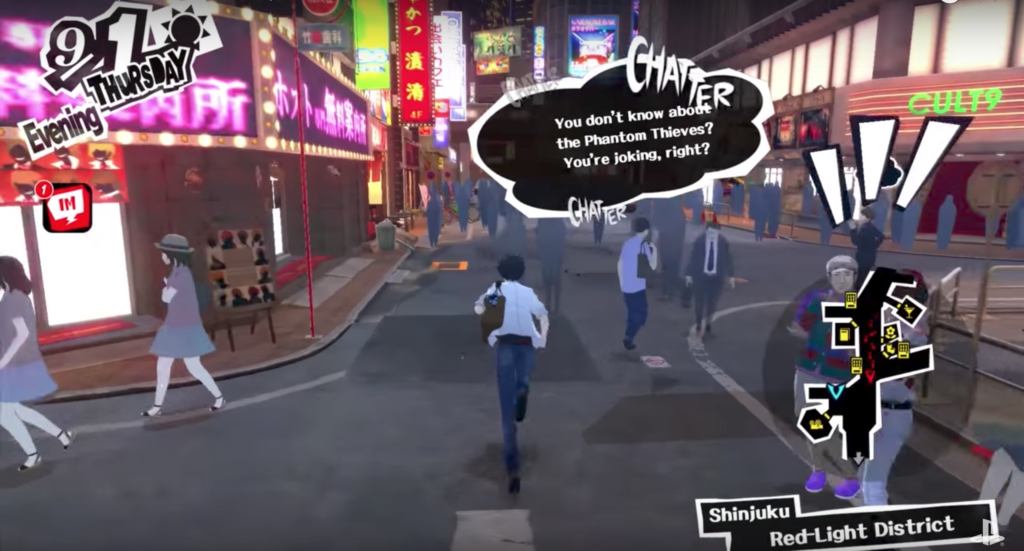 With that in mind, you may want to take a Monday to advance one floor in a the Palace, then hang out with Futaba on Tuesday afternoon and create a lockpick in your room for secured chests in the Metaverse. If that doesn’t tickle your fancy, you could ignore the Palace entirely for a bit and spending Thursday afternoon in the local batting cage to improve your Proficiency, followed by working at the diner in the evening for some extra money.

It’s all up to you. That’s not to mention that there’s also a completely optional multi-floored dungeon known as Mementos (very much like Tartarus from Persona 3), which is there to offer additional monsters, items and sidequests outside of the main Palaces.

With all of this variety, P5 ably avoids the trappings that many JRPGs fall into of that make them feel like too much of a grind. You’re never forced into doing anything for any significant period of time, and so the game becomes more enjoyable through the freedom of choice as a result.

That said, I found myself choosing to spend bulk of my time working towards building relationships with both my party members and other people I met in Tokyo. These characters — known as Confidants — are the true stars of the game. The progression of their storylines is immensely satisfying and oftentimes rather moving. Similar to the Social Links found in previous Persona games, you’ll be able to become closer to certain characters by spending time with them.

My favourite Confidant by far is Futaba, the hacker and source of intel for the Phantom Thieves. Following the death of her mother, Futaba has become a recluse, shuttering herself within the confines of her darkened room and refusing to see the outside world. At a certain point in the story, she eventually joins your team and is eager to make a difference in the world. Unfortunately, it’s initially very difficult for her to come out from her home, instead looking to help you remotely. 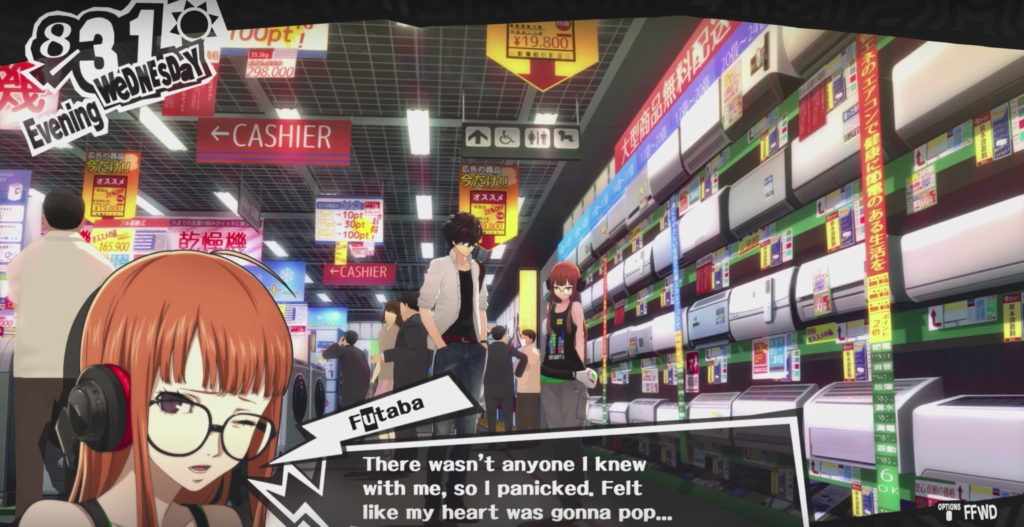 As you level up her Confidant rank, Futaba will work towards various goals on a list of increasingly challenging tasks, like going into a crowded store or trying to attend school for a day. During this time, you’re right beside her to help with her anxiety, encouraging her through different dialogue selections. All the while, her guardian — who is also a Confidant — expresses his concerns that he’s failed to look after her properly. He blames himself for her isolation and feels that he’s failed her mother, who he was close friends with before she died.

Other Confidants include a disgraced politician, a beleaguered teacher harassed by parents and an alcoholic journalist. Despite the rather absurd supernatural conceit surrounding Persona 5, the game nonetheless manages to be grounded thanks to the relatable, everyday plights of the people that you encounter across Tokyo. Games don’t often address these kinds of complex themes, making P5 all the more notable for how artfully it handles them.

And best of all, outside of the narrative incentive behind aiding them, Confidants can also develop abilities that can benefit you in combat. In Futaba’s case, while she doesn’t fight with you in battles, she can still learn stat increasing buffs and other useful abilities that she’ll randomly use on your party members. Sojiro’s Confidant chain, meanwhile, will reward you with lessons on how to prepare food and drinks, giving you otherwise hard-to-come-by items that restore your magic points (SP).

As it stands, Persona 5 is easily my favourite game of 2017 so far, which is impressive in a year that is already packed with great titles like Resident Evil 7: Biohazard, Horizon: Zero Dawn and The Legend of Zelda: Breath of the Wild. An unparalleled sense of style, superb turn-based combat, some truly compelling characters and themes and a genuinely engrossing world make Persona 5 not only one of the best JRPGs ever made, but also one of the finest games in years.