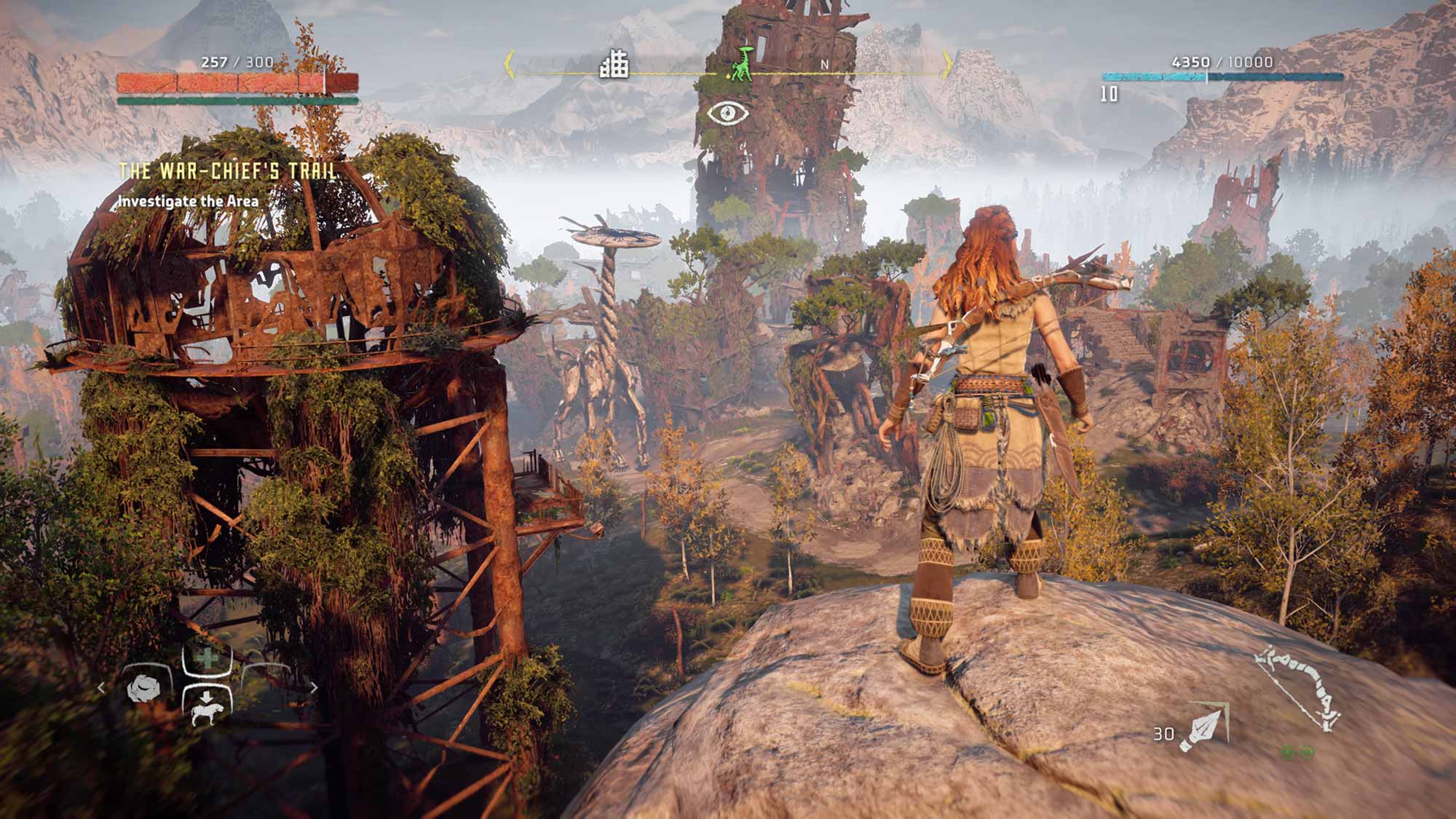 Guerrilla Games’ Horizon Zero Dawn features a vivid, colourful world that amounts to one of the most fully-realized gaming universes I’ve experienced in recent memory.

In an industry full of triple A shooters that often feature sci-fi backdrops, Horizon Zero Dawn’s colourful pallet and unique mix of fictional, ancient tribal cultures, smashed together with mechanized technology from a bygone era, creates a compelling contrast.

The first time a massive ‘Tallneck’ lumbers past a dilapidated city, overgrown with ancient trees and vines snaking up walls, I experienced a brief moment of awe. Developed by the same team behind the Killzone franchise — a first-person shooter series that arguably never reached the level of popularity it deserved — Horizon’s developers should be commended for creating a virtual world that feels different from almost any other game before it.

In the crowded modern video game market, this isn’t something that’s easy to accomplish. 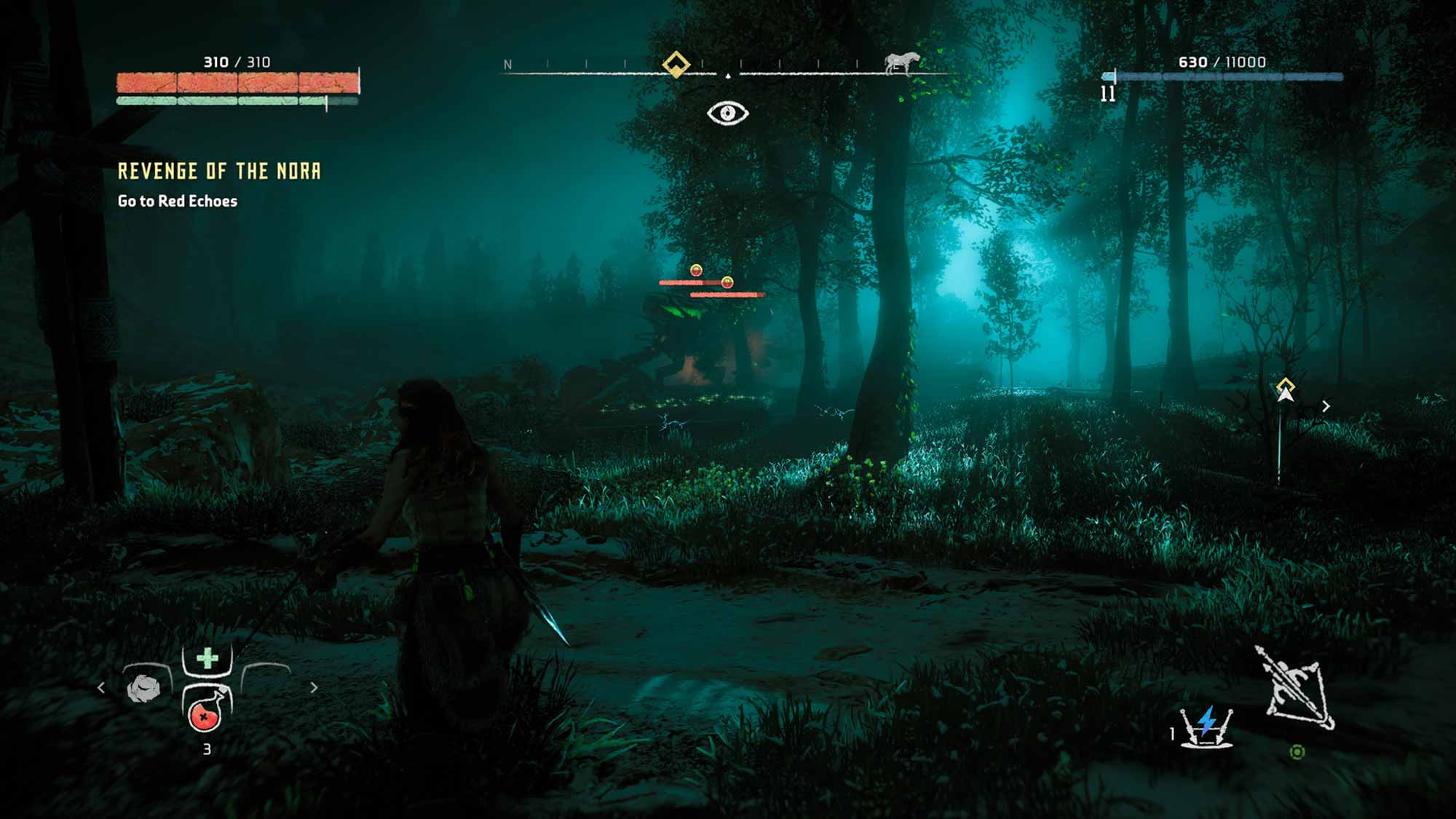 Admittedly on the gameplay side of things, Horizon’s combination of range and melee attacks, as well as it’s open world hunting mechanics, didn’t initially click with me. The game’s controls are intimidating and even though Horizon’s tutorial section is lengthy and does a reasonably good job of explaining its combat system, there’s a massive amount of depth to taking down foes that’s up to the player to discover.

It’s true that figuring out how to take down the title’s giant, mechanized robots is part of Horizon’s appeal, but throwing the player directly into Horizon’s massive, open-world, with little explanation of how to destroy some of the title’s larger, more aggressive foes, is an issue that could have easily been solved with more a little more handholding. 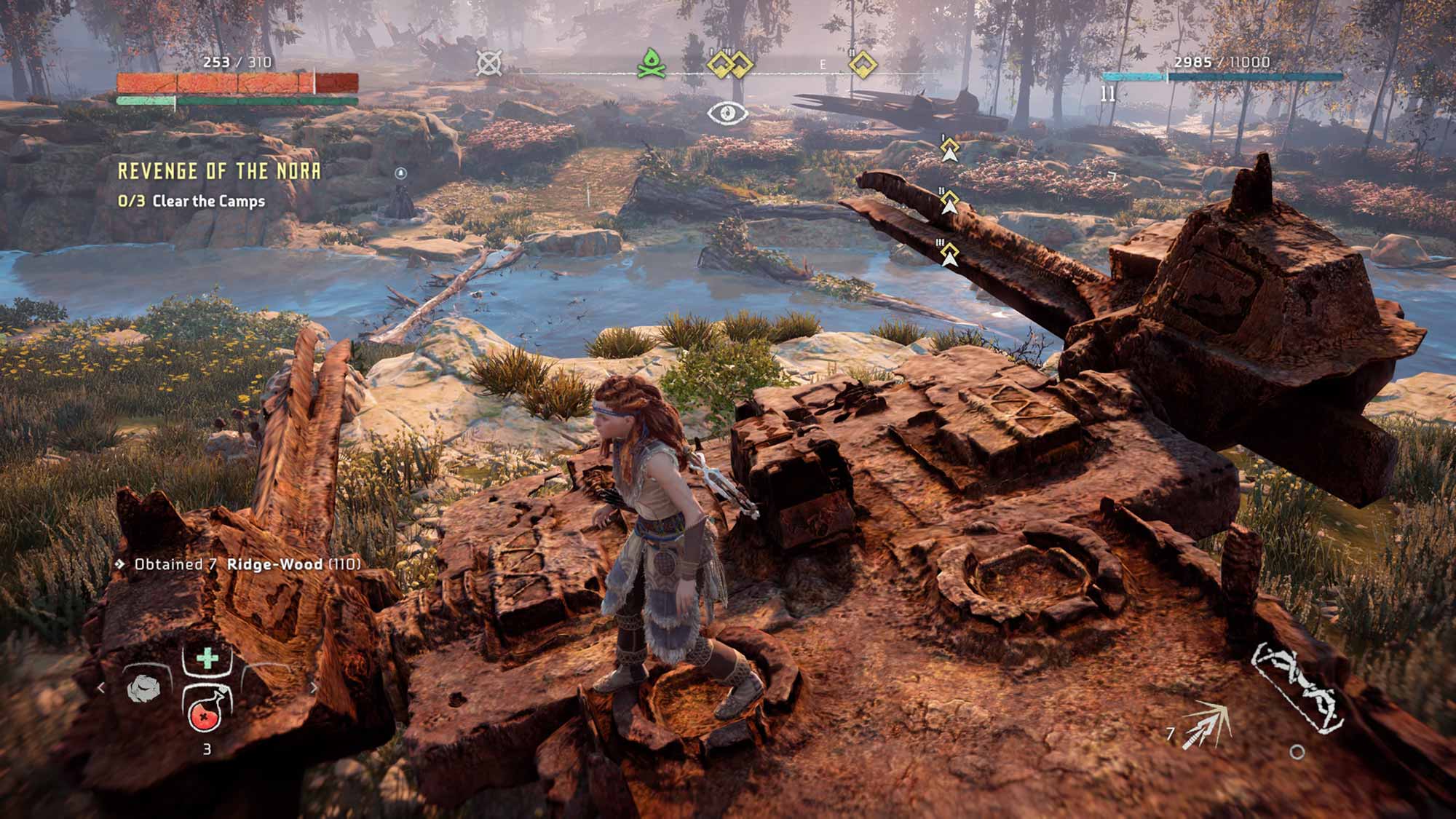 If I had to draw a direct comparison to another video game, I’d say that Horizon’s bow and arrow combat shares a lot of similarities with the recent Tomb Raider reboot, particularly Rise of the Tomb Raider. Throw in a dash of Assassin’s Creed style free-running and platforming, with a little bit of Far Cry 4’s hunting system and Ubisoft’s overall focus on open world games, and you’ll have an idea of what kind of game Horizon Zero Dawn is.

The moment when Horizon’s open world hunting mechanics began to make sense for me, was when I took down a giant creature called a ‘Broadhead,’ by settings up electrically charged trip wires shot out from one of the game’s more inventive weapons called a Tripcaster.

After coaxing the creature to chase me over an array of mountains, the wires, which I laid between two tree trunks, halted the beast in its path temporarily, allowing me to target the weakest point in its armour with a volley of fire arrows. In fact, just to get my hands on the fire arrows required me to rapidly replenish my supply through Horizon’s deep crafting system, all while I was still in the heat of battle, dodging and rolling, trying not to get hit by the massive beast. Combat in Horizon Zero Dawn requires a significant amount of concentration, especially when battling some of the title’s more formidable enemies, whether stealthily, or head-on. 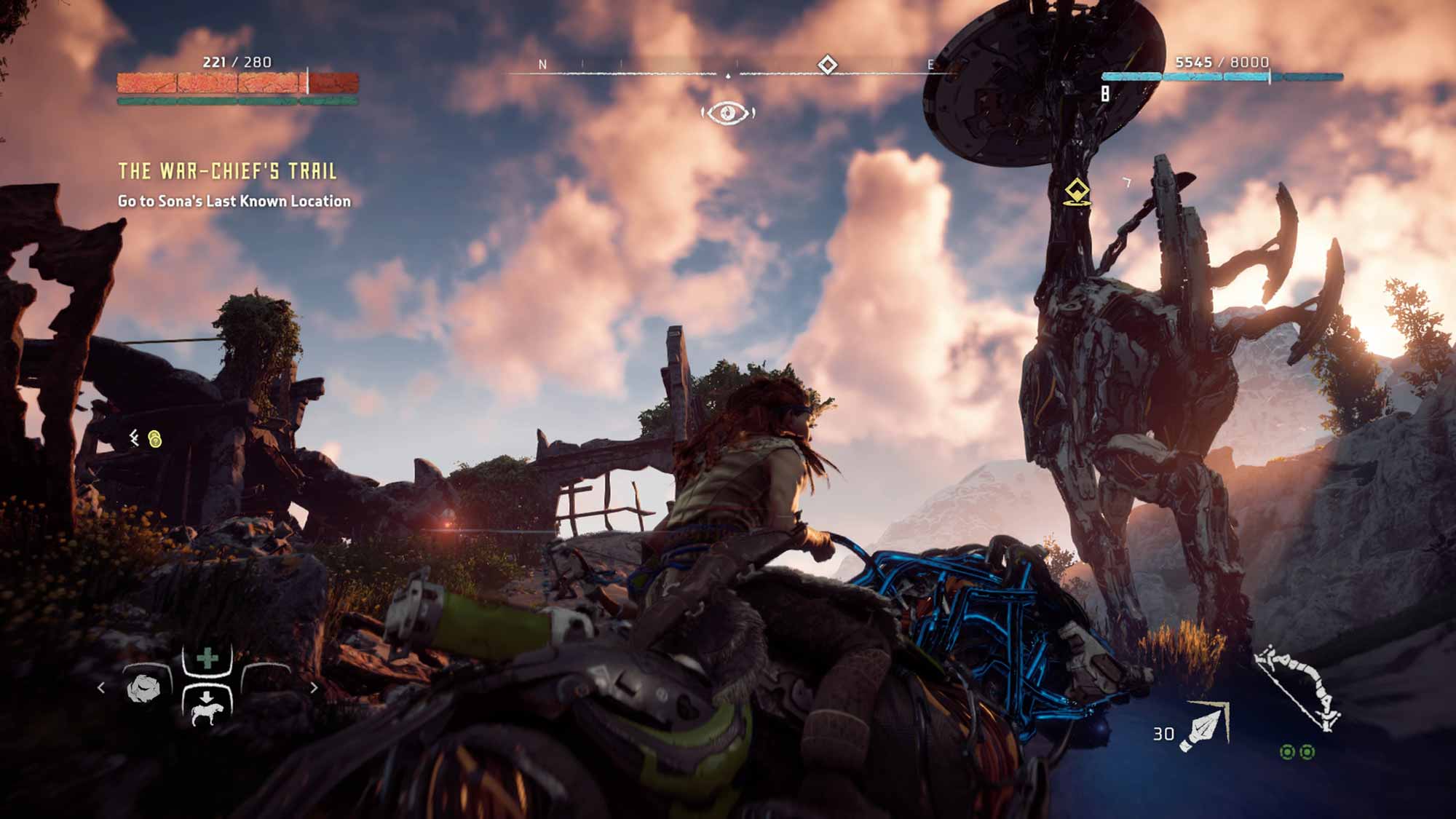 Horizon’s characters, as well as its metallic, dinosaur-like enemies, are visually detailed and feature compelling art design. Much of the title’s lore is up to the player to uncover. Not since the Bioware’s Mass Effect universe has a game’s story grabbed my attention like this though.

Horizon, however, is not without faults. While the game is visually stunning despite the fact that it runs at a solid 30 frames per second, especially when running on the PlayStation 4 Pro, character facial expressions often look awkward and the game’s dialogue falls out of sync with character lip movements.

There’s also something off-putting about characters’ skin that results in a plastic look that’s compounded when skin is covered with water. While neither of these issues are experience-ruining, they pulled me out of the game’s world more often than I would have liked. While Guerilla’s efforts to develop detailed characters are commendable, I can’t help but be disappointed that they don’t rival the quality of a studio like Naughty Dog, the developer behind the Last of Us and the Uncharted series. 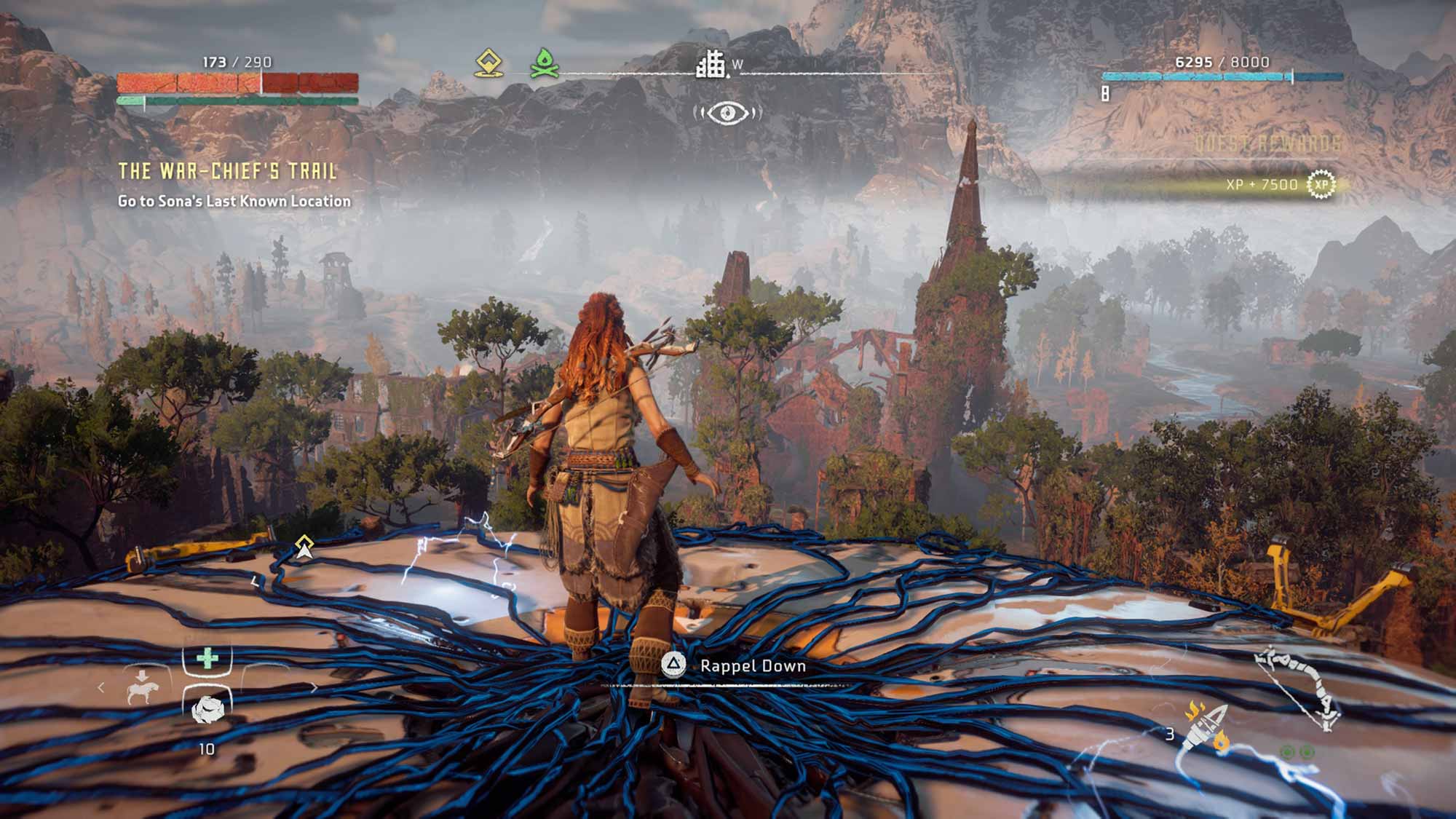 During the dozen plus hours I’ve spent with the game so far (admittedly I’m nowhere near finished Horizon), I’ve encountered colourful characters and helped out tribes with various tasks, though its the journey surrounding Horizon’s main character Aloy, that I’ve found the most satisfying to unfurl.

Without giving too much away, the game sets the stage for Alloy’s motivations early on, as she lives as an outcast from her tribe known as the Nora. She’s ‘motherless’ and being raised by a fellow outcast named Rost, leading to a tumultuous childhood and relationship with the Nora that acts as the overarching theme of Horizon’s story.

Sometimes Horizon’s dialogue becomes overwrought, especially during sections of the game that focus on the lore surrounding the Nora and the game’s other tribes, but these bouts of awkwardness aren’t frequent. Generally, unlike the game’s facial animations, Horizon’s story and voice acting are some of its strongest features. 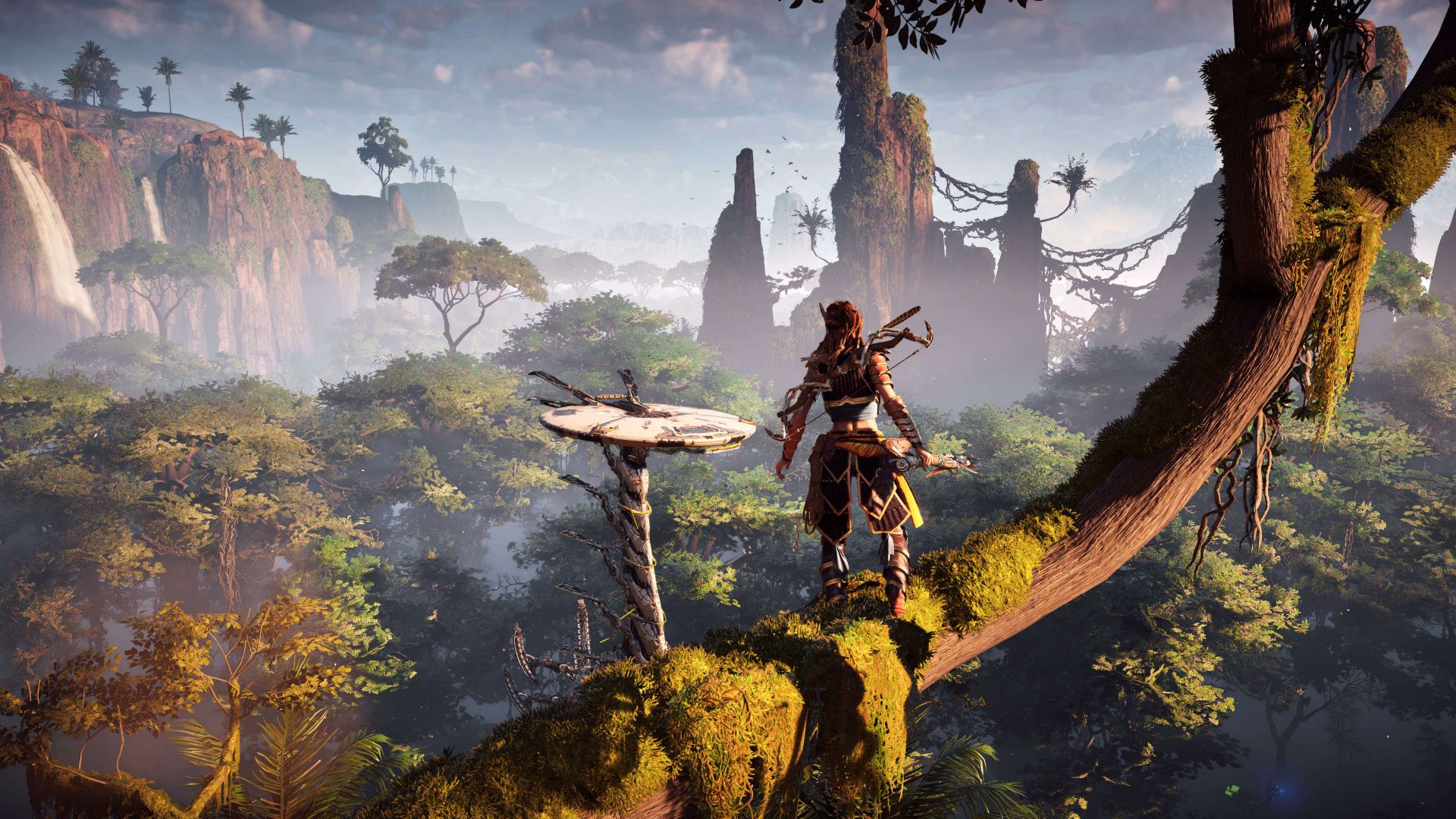 If Sony and Guerilla’s goal was to launch a new marquee franchise, then Horizon certainly fulfils that objective. Although Horizon Zero Dawn has a number of issues that could have easily been solved, the compelling nature of its world, alive with characters I’m actually interested in learning more about, as well as combat that’s varied and entertaining, overshadow these minor problems.

If you’re looking for a deep open world game to delve into, Horizon Zero Dawn is exactly the game you’ve been waiting for.

Horizon Zero Dawn is set to be released on February 28th for the PlayStation 4.