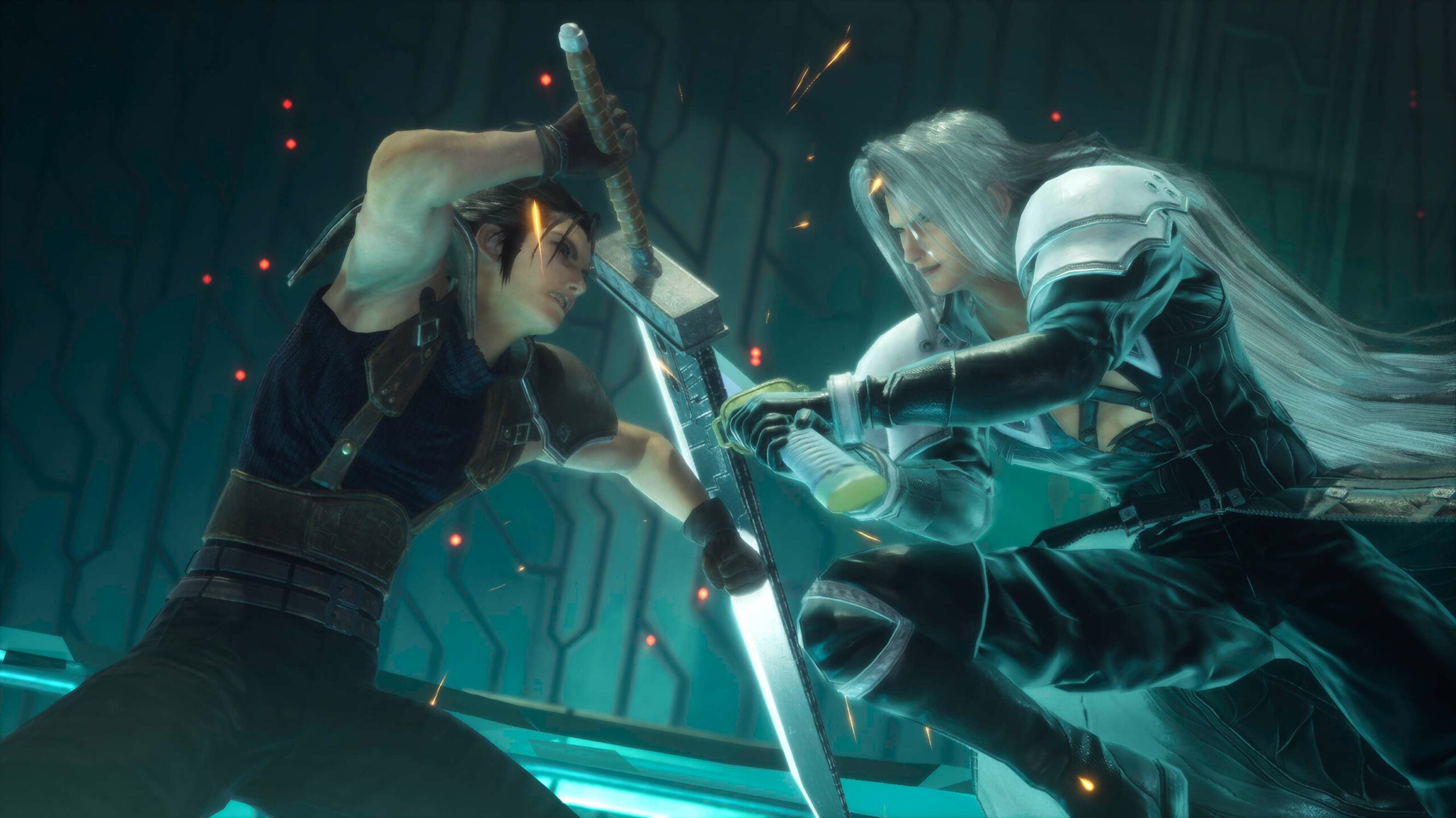 Revisiting any kind of media from your childhood as an adult can be a bit risky.

The end result is an experience that I overall enjoyed revisiting, especially since it’s been stranded on the PSP, but also definitely view in a different, more complicated light. As a result, my willingness to recommend it to non-VII purists, especially those who were introduced to the mythos through 2020’s incredible VII Remake, comes with a fair number of caveats.

Before we go further, it should be noted that this Reunion is, fundamentally, the same experience as the original PSP game, despite a litany of visual and gameplay changes. In particular, the story remains exactly the same, outside of a few odd words being changed. For the uninitiated, Crisis Core‘s narrative takes place years before Final Fantasy VII and follows young Shinra SOLDIER Zack Fair as he pursues a rogue SOLDIER named Genesis who has ties to his mentor, Angeal, and iconic VII villain Sephiroth. Zack is also the best friend of VII hero Cloud, so a big part of Crisis Core‘s appeal is learning more about a pivotal character who had very little screentime in the original 1997 classic.

It’s a premise with significant potential, then, but unfortunately, the game doesn’t fully capitalize on it. In particular, the dialogue is oftentimes incredibly stilted, resulting in meaningful character interactions falling flat. Although the original VII has an infamously botched English translation, it was still never less than serviceable. Crisis Core, however, just suffers from some awful writing, period. And because this is a straight remaster, it doesn’t benefit from the extensively revised and genuinely well-written script treatment that was given to Remake. 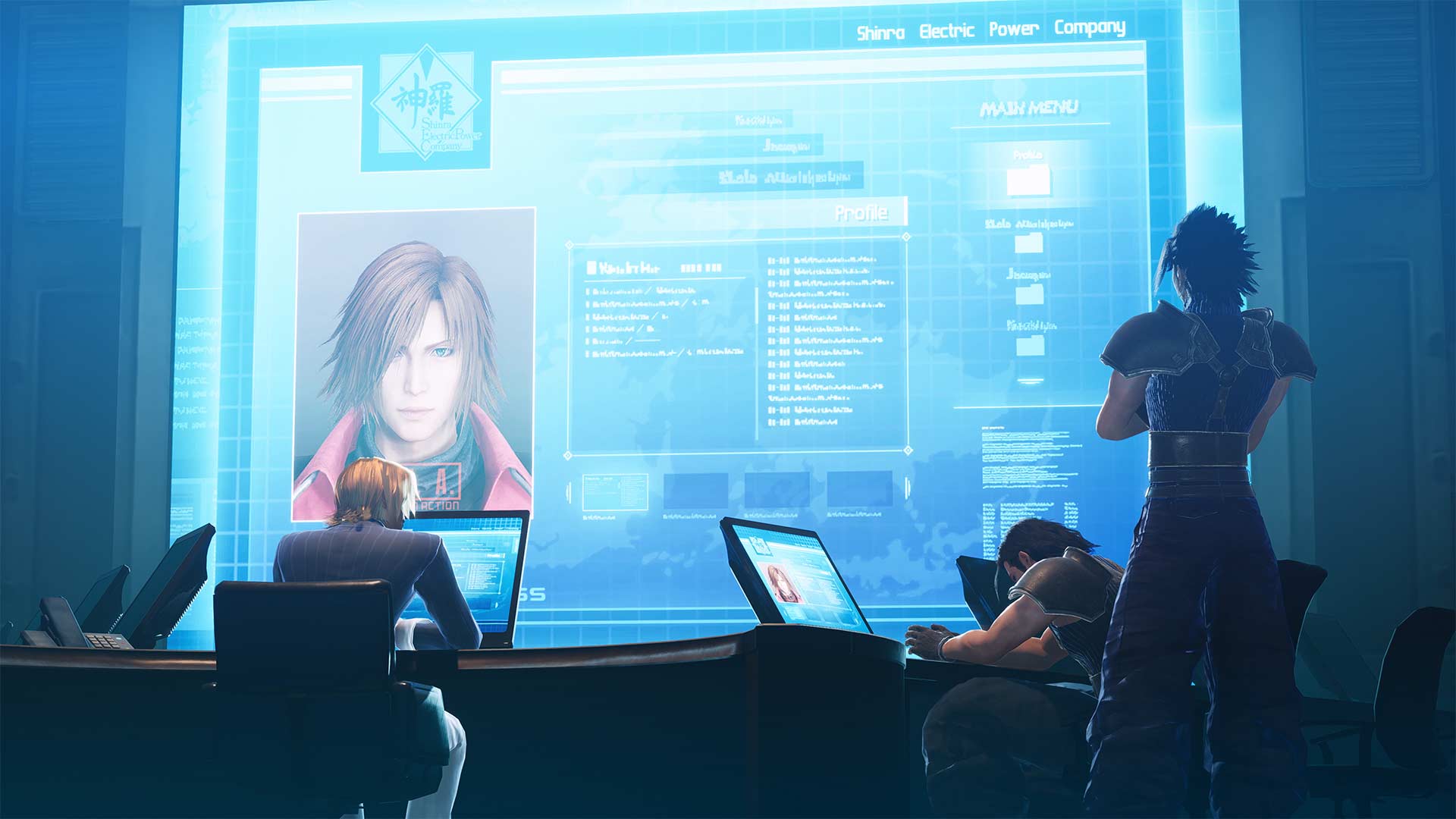 Genesis, pictured on the screen, is a pretty weak villain, especially compared to Sephiroth.

Some of Crisis Core‘s plot beats are also painfully derivative of VII. Take Genesis, whose villainous turn as an ex-SOLDIER seeking revenge against Shinra is a decidedly less interesting retread of Sephiroth’s story in VII. Making him even blander is his annoying proclivity to recite lines of poetry in literally every single scene; he comes off more as an angsty teenager than a genuinely threatening foe like Sephiroth. The fact that he lacks any real personal connection to Zack only made me more disconnected from him as a character.

But where Crisis Core succeeds, even to this day, is in its portrayal of Zack. As a nice contrast to the stoic and sullen Cloud, Zack is energetic, optimistic and bubbly. Unlike Cloud, he begins his journey naïvely wanting to become a big hero at Shinra, but over the course of the campaign matures enough to question his role in everything, leading him on a path to discover what true heroism really means. There’s a lovely sincerity to this arc that feels even more refreshing in 2022; where many modern stories might be afraid of such joke-free sentimentality, Square Enix fully commits to it in earnest. It makes Zack an extremely likeable and compelling lead and creates a strong emotional investment in his story, especially in the game’s heartwrenching third act. Zack’s a character who I’ve held dear for many years, and I’m overjoyed that his story remains as gripping as ever.

Credit should also be given for how Crisis Core enhances pre-existing elements of VII, like Sephiroth, whose more loyal and caring side in the prequel works wonders in humanizing him before his inevitable fall from grace. Similarly, the fresh-faced Cloud’s lovable friendship with Zack adds weight to his character development in VII, and the same goes for Aerith and her burgeoning romance with Zack. The game could have benefited from exploring these threads more thoroughly, but what we get is undeniably solid. Crisis Core also fleshes out the world of VII in some novel ways, be that through unpacking the inner workings of Shinra or showing more of the everyday people affected by the company. Thankfully, character- and world-building efforts make up for the more unsavoury elements of the story. 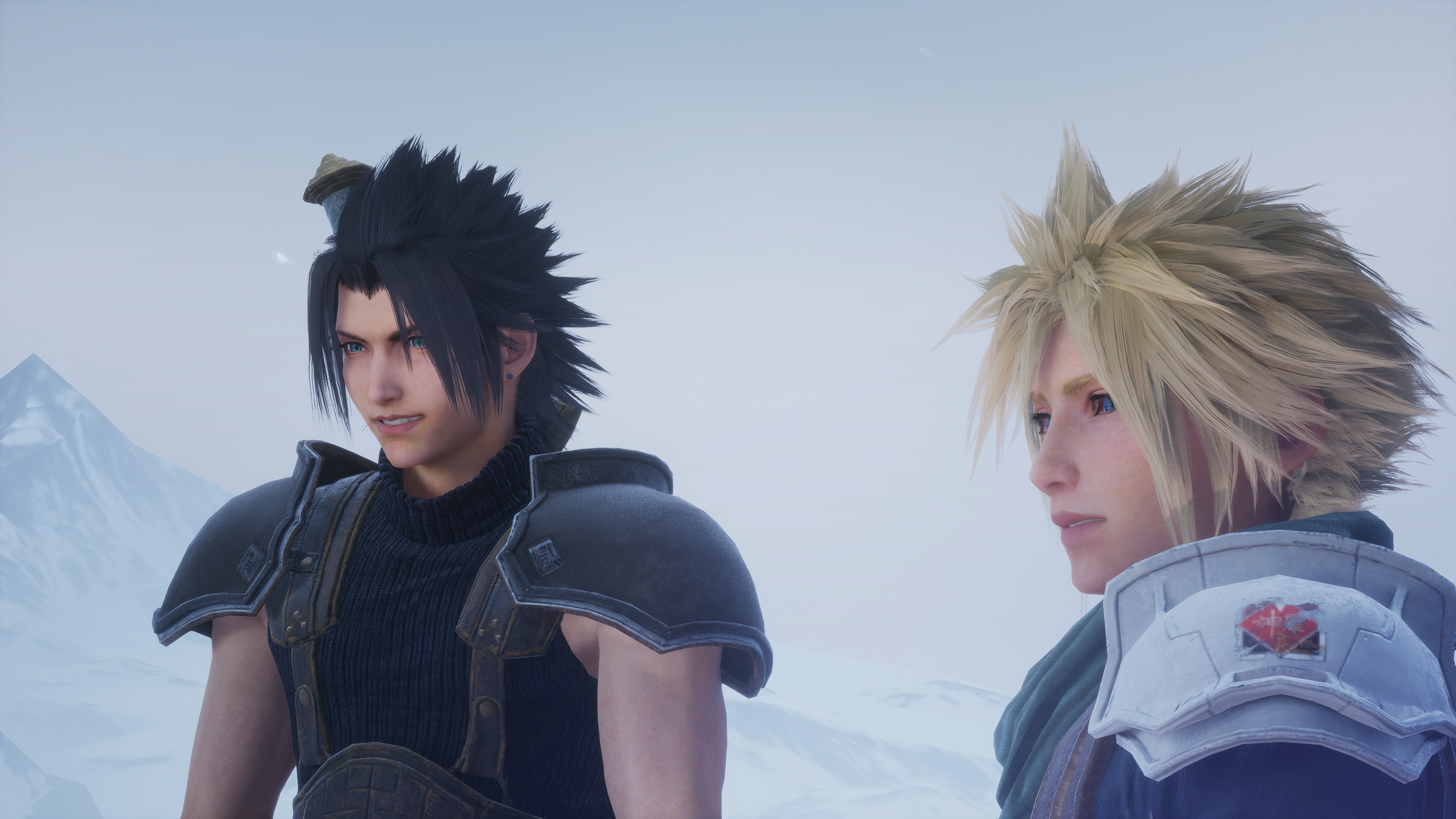 If Crisis Core remains a mixed bag in the narrative department, the remaster graciously makes sweeping improvements in both visuals and gameplay.

With respect to the former, this is easily one of the most impressive graphical remasters I’ve ever seen. Using Unreal Engine 4, Square Enix and co-developer Tose have overhauled every aspect of the visuals to make Crisis Core look like a modern game. All of the character models look much sharper, particularly with their now sleek, shiny and smooth skin and hair, and that attention to detail has also carried over to pretty much everything else. Robot enemies have tons of little scuff marks on them to show wear and tear, particle effects from magic attacks are plentiful and dazzling, and fires and smoke flicker with realistic flair. It’s not quite as gorgeous as Final Fantasy VII Remake, but it’s remarkably close, especially for an upgrade of a nearly 15-year-old game.

That said, the pristine visuals only highlight the more dated elements of the visual presentation. For one, characters still have the same canned animations in several interactions, which can feel repetitive. Worse still is the fact that the PSP game’s once-impressive CG cutscenes haven’t been remastered, resulting in some jarringly blurry cinematics on a 4K TV. These are relatively brief and only happen periodically throughout the roughly 12-hour campaign, but it still would have been nice for them to get some form of enhancement. 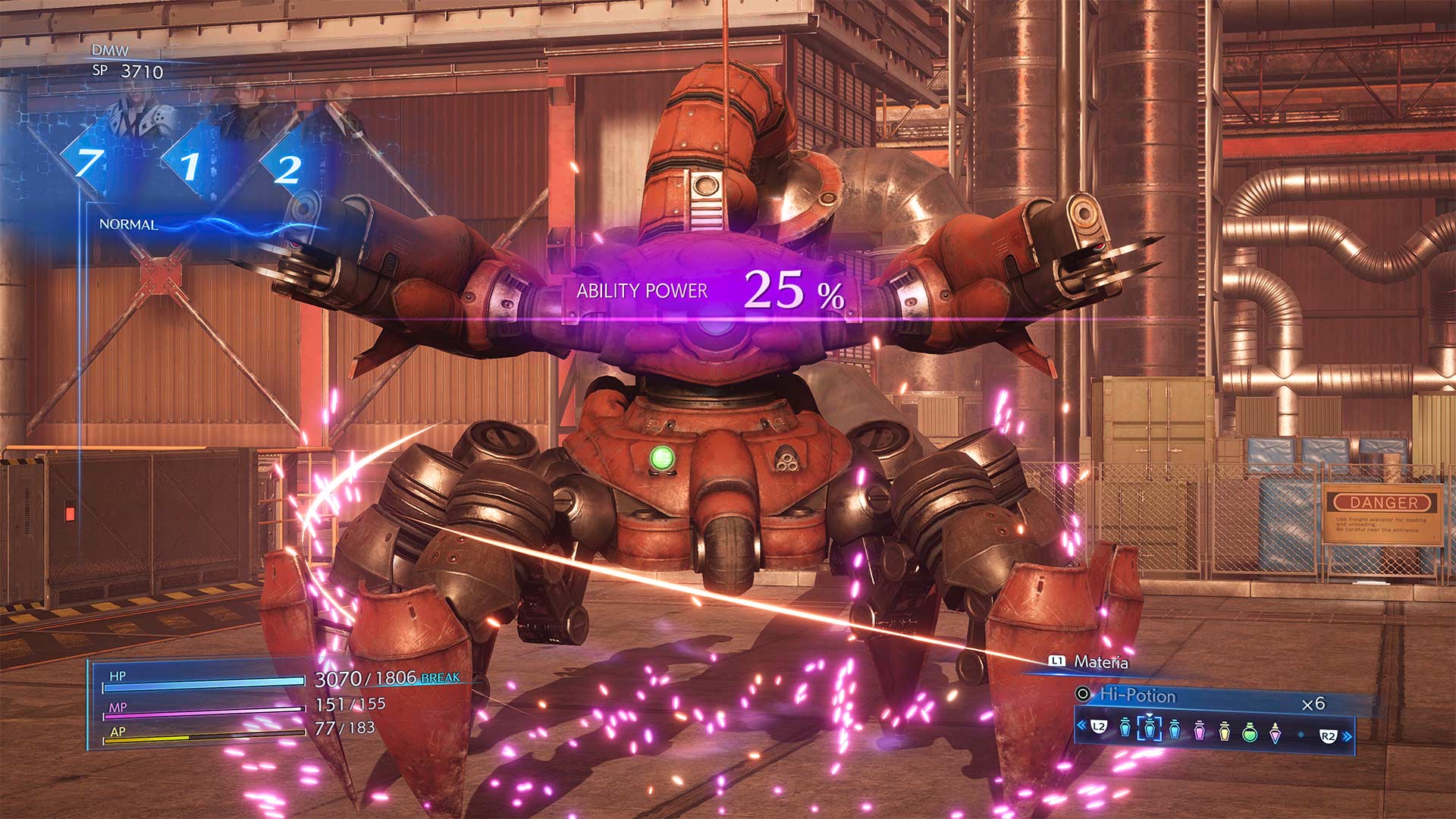 Also spotty are the newly recorded voiceovers, which have several of Remake‘s new cast reprise their roles instead of the original PSP actors. This includes Caleb Pearce as Zack, Cody Christian as Cloud, Tyler Hoechlin as Sephiroth and Briana White as Aerith. Admittedly, some of these changes were for the better; Christian and White, in particular, bring a lot of charm to their respective roles. But Pearce often feels miscast as Zack, with his nasally tones coming off as more annoying than anything, especially compared to the character’s original actor, Rick Gomez, who delivered a far better performance all-around. This surely won’t be much of an issue for newcomers, of course, but it’s certainly one for many returning players like me.

“More than a remaster”

Unlike the original FFVII, Crisis Core features real-time combat, allowing Zack to perform basic sword attacks in conjunction with Materia-enabled spells and other abilities. In Reunion, that system has been refined in several key ways to make it feel significantly better across the board. For one, the input limitations of the PSP meant that all of Zack’s commands had to be toggled horizontally with the handheld’s side buttons. Reunion, however, allows you to map your moves to shortcuts, removing that clunkiness and freeing you up to get more into the action.

Reunion also cleans up the Digital Mind Wave (DMW), a roulette-esque mechanic that rolls automatically throughout battles and allows Zack to perform special offensive or stat-boosting ‘Limit Break’ moves depending on whichever character is spun. The idea is that this represents Zack’s mental state and might result in some characters, like Cloud or Sephiroth, being rolled more often depending on recent plot points. It’s a neat storytelling technique that illustrates Zack’s loyalty to his friends through gameplay, although it felt intrusive at times in the original game due to the associated cutscenes (Zack’s memories) that would play and disrupt the flow of combat. DMW moves would also be used automatically, reducing player agency. None of this is a problem in Reunion, as you can choose to skip DMW scenes and bank Limit Breaks to use at will. This adds a new layer of strategy, since you can control when you want to execute, say, Sephiroth’s powerful Octaslash Limit or Aerith’s restorative Healing Wave. 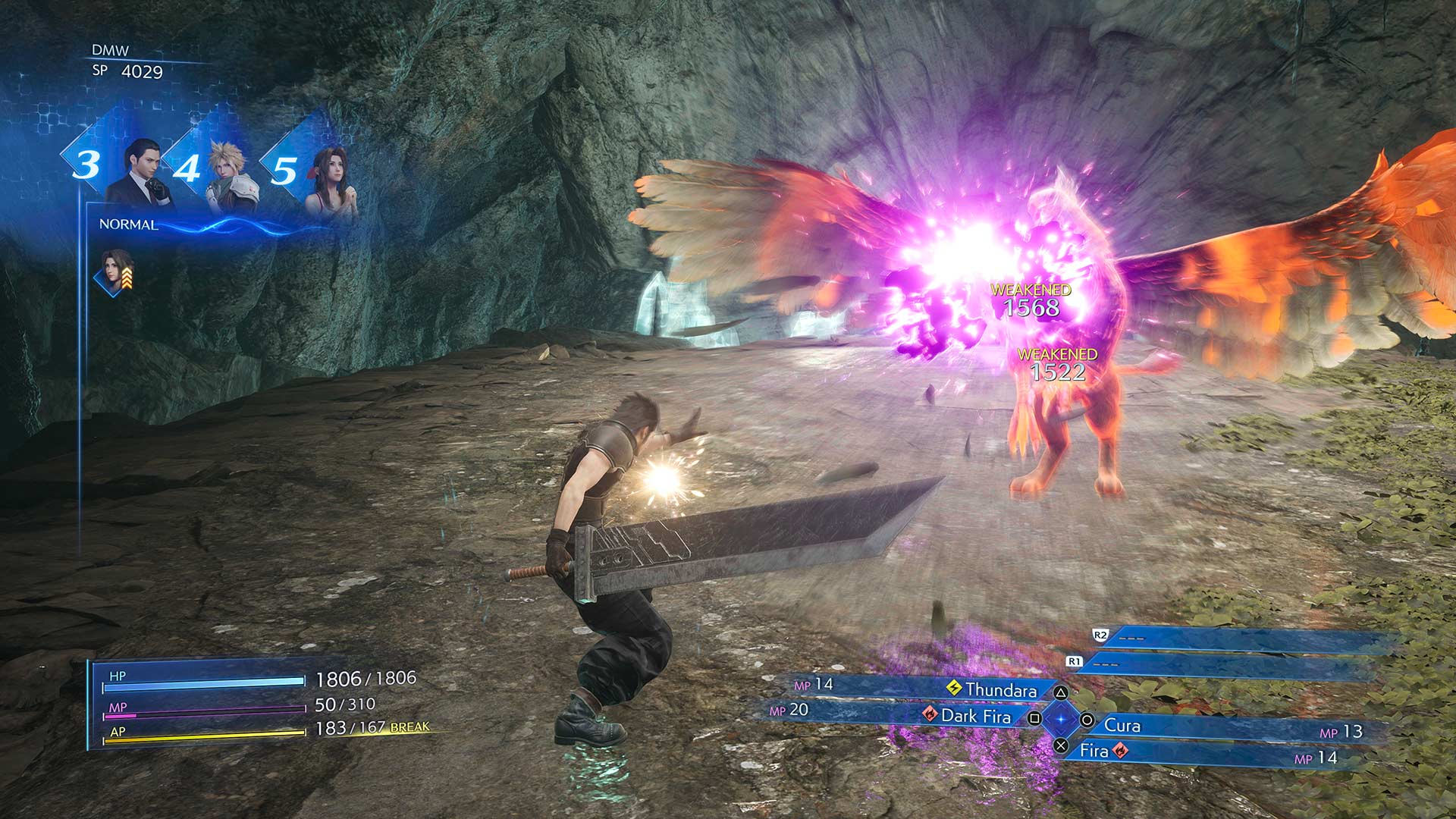 The DMW in the top-left, featuring returning VII characters Tseng, Cloud and Aerith.

Other changes include a new Remake-inspired sword stance for Zack (unlockable in the latter half of the game) that lets him wail on enemies with slower-but-heavier blows, the ability to sprint through maps and increased damage for certain moves after using basic melee attacks to encourage a bit of mix-and-match combos. Even with these changes, Reunion by no means feels as fast, fluid or engaging as Remake, but it’s an understandable shortcoming considering it’s been built on the bones of a PSP game. For what it is, though, Reunion is definitely an entertaining and easy-to-pick-up action-RPG.

In a similar vein, I have to be a bit more forgiving of the game’s environments. While they look exponentially prettier now in Reunion, they’re still woefully linear and generic in terms of actual structure. This is especially true in the game’s many sidequests, which consist of Zack just running through the same bland caves, forests and mountains to hunt monsters. There’s very little in the way of story in these missions, so your only incentive to do them is to receive lucrative new Materia and gear, which play into the addictive Materia Fusion system. Crisis Core‘s portable DNA is most prominent in such environments, as Square Enix clearly intended for these bite-sized missions to be completed on the go. They’re trite, to be sure, but at least they’re optional.

The price of freedom

In the end, Crisis Core Reunion is a bit tricky to recommend. If you’re someone who played and enjoyed the original PSP game, Reunion is a must-play many graphical and mechanical improvements. But those who have only played FFVII Remake should be wary of going into Reunion with the assumption that this is anywhere near the same quality. Still, if wonky writing, relatively simple combat and repetitive side missions aren’t deal-breakers, then Reunion is certainly worth checking out. Above all else, Zack makes for a tremendously endearing protagonist in his own right — not to mention one who’s set to play a key role in Remake‘s two sequels. Regardless of where you’re coming from, Reunion is an excellent and worthwhile remaster of a flawed-but-heartful game.