GM’s Hummer EV is a comeback story in the making 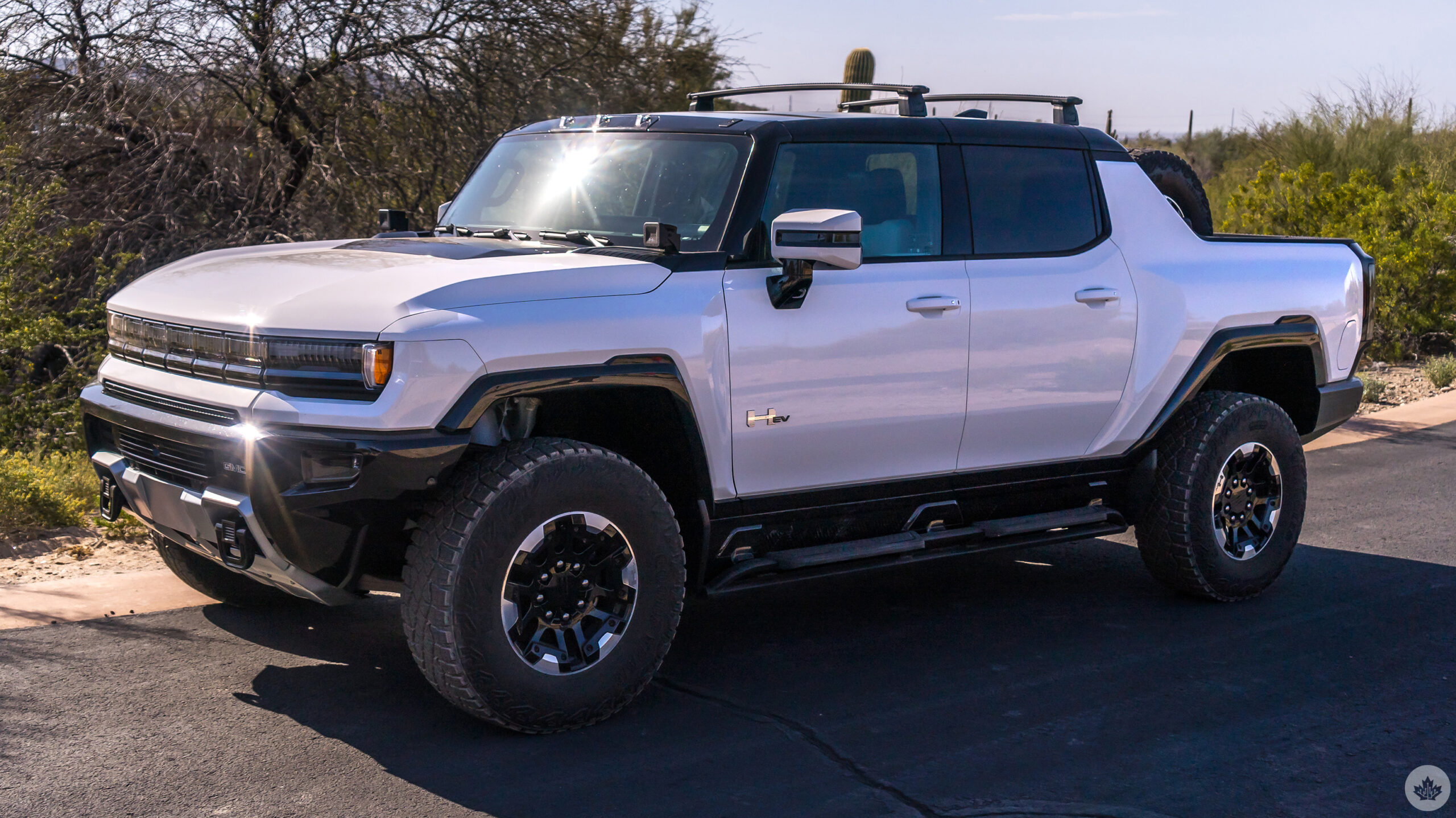 The Hummer is poised to make a comeback as an all-electric vehicle (EV), and now that it’s starting to hit the road, GM wants to give it a new lease on life.

Despite its bulky and imposing frame, Hummer was always synonymous with both luxury and “roughing it” in more challenging terrain. GM acquired the branding rights in 1999 and kept rolling out Hummers from its assembly lines until it effectively killed it as part of its bankruptcy during the financial crisis in 2009.

After more than a decade in the doldrums of automotive lore, the squarish monster is back. And this time, it’s here to help save the planet, as GM asserts, courtesy of its EV chops. I got hands-on time with it during a test drive in Arizona to see what all the fuss is about.

Putting the Hummer EV together

GM is so bullish on the Hummer EV that it even produced a documentary about it. Some of the supporting data may also feed into that, like how it only took 10 minutes for customers to reserve 1,200 of the Edition 1 trucks when they became available in December 2020.

The tri-motor drivetrain has a combined 1,000 horsepower, plus 1,200 lb-ft. of motor torque. Hence, it can accelerate to 96 km/h in a mere three seconds. For a vehicle built to do off-roading, that kind of power would dust most vehicles on any drag. 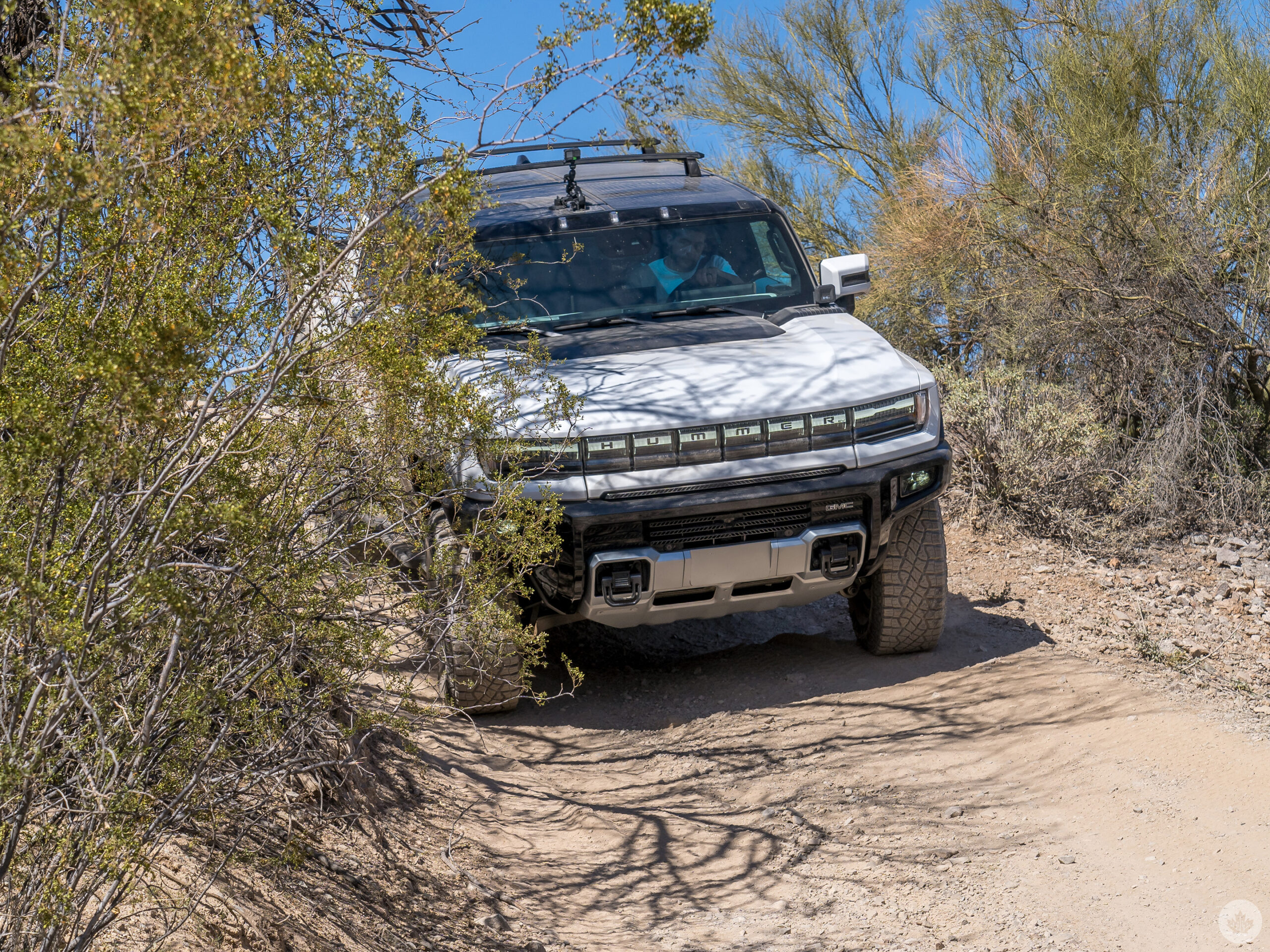 Its battery construction is equally interesting, as GM’s proprietary Ultium system gets a double layer of cells. Ultium is part of the chassis, so the battery cells line up along the bottom, below the cabin. The efficiency means the batteries can operate at 400 volts or 800 volts to regulate supercharging. To do that, GM says it switches from “parallel” to “series” through a mechanization within the pack, which means the Hummer EV can still use existing chargers, while also working with much faster 350kW DC chargers that are better with 800-volt capability.

GM estimates range to be 529km per full charge — not bad for something this big. It’s just hard to quantify that figure, as it often is with EVs because of the variables. Highway versus city driving, or off-roading versus all-terrain driving, not to mention air conditioning. All of those affect range, though it would be fine on road trips with chargers along the way.

Seeing it from the outside, sitting inside

Edition 1 units are only available in the Summit White Exterior you see here, though GM says other colours will come to the next trims: EV2, EV2X and EV3X. Some in the test drive came with racks for spare tires in the cargo bed, whereas others didn’t. There’s a trunk in the front, along with 18-inch wheels, underbody skid plates and rock sliders, 18 cameras arrayed around the body and the undercarriage to really see everything around and below the vehicle.

The four roof panels (they’re tinted and transparent) come off and the power rear window comes down for a real open-air experience while driving. There’s a configurable tailgate in case you were curious, too. 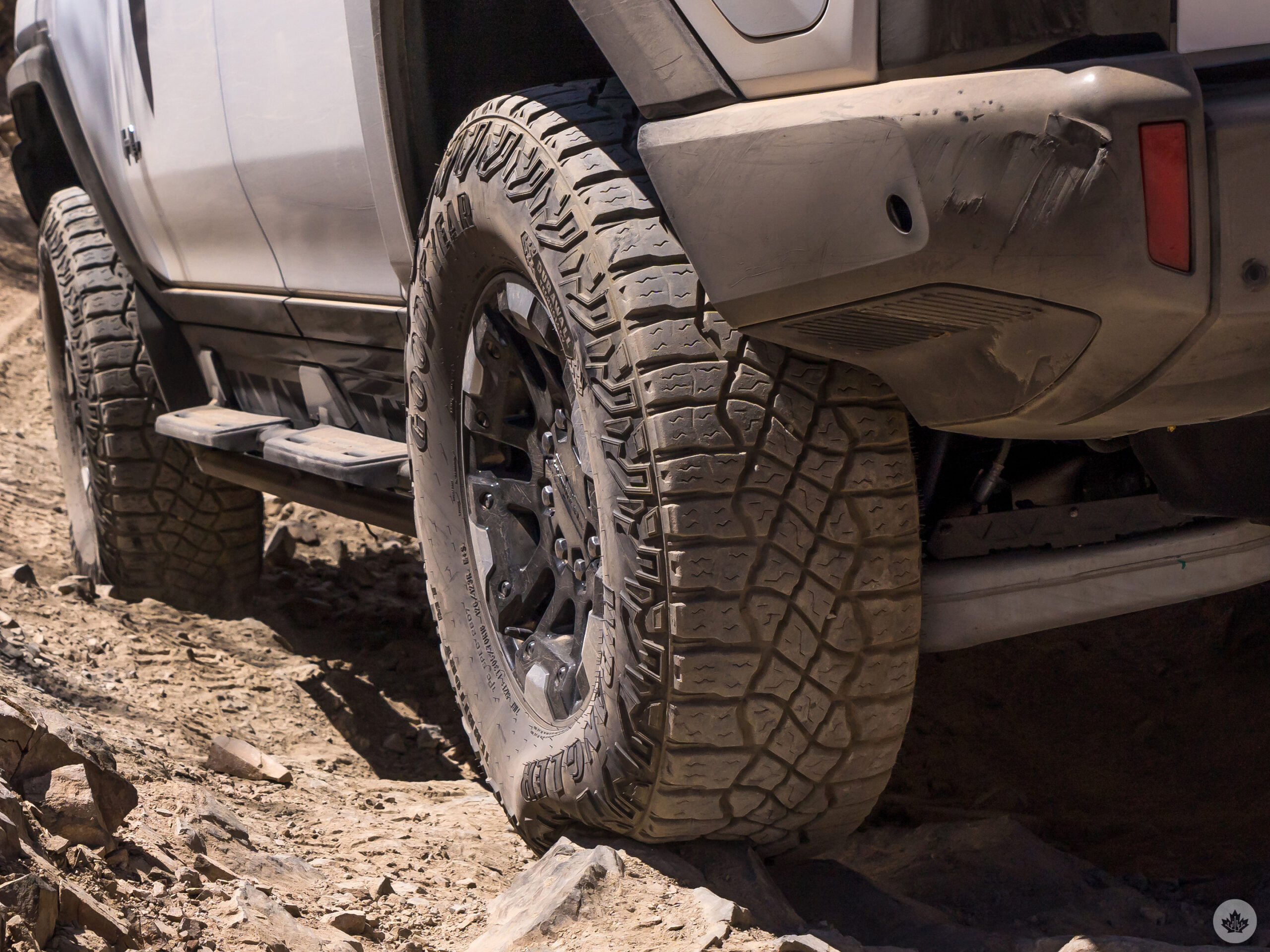 The cabin isn’t quite as spacious as you might think when looking at the Hummer EV from outside. Not that it’s cramped, just that it won’t be the same as, say, a GMC Yukon Denali, for instance. A tall guy like me had no problem getting comfortable in all seats inside, and it doesn’t hurt that there’s a 14-speaker Bose sound system inside that was impressively resonant.

Two huge screens make up the infotainment system inside. Drivers face a 12.3-inch display for the digital cluster, along with the main 13.4-inch display running everything else. It runs Android Automotive, as GM continues to transition to Google’s built-in system with more of its vehicles going forward. Not to worry, though, as wireless Android Auto and CarPlay will still work just fine.

I’m not sure I was overly taken with the layout because GM chose what it calls a “lunar” wallpaper with thinly textured black icons. I reversed it by setting it to dark mode while playing with the system and found better contrast that way, but I’m thinking some variance in background might be a good idea. On a bright sunny day, especially with the roof panels removed, the screen’s contents aren’t as easy to see. 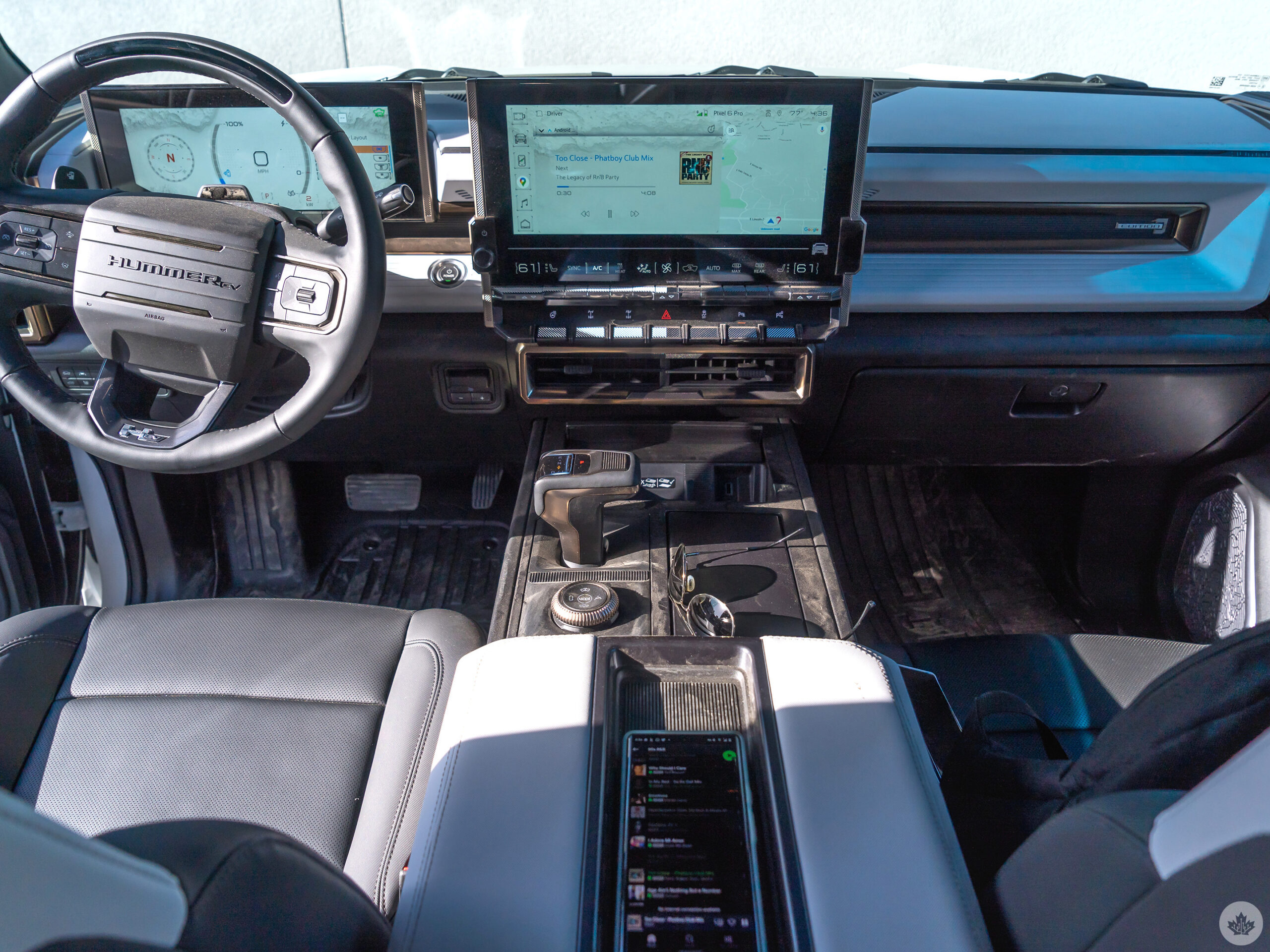 The Hummer’s driving modes and other features also run through the infotainment system, so I would switch by tapping on the screen’s menus. Short video animations help illustrate these modes, and I soon realized the connection because the system was developed with the Unreal Engine. Might be the first time I’ve seen a gaming engine find its way into vehicle infotainment, and I suspect it will become a common crossover for other vehicles in the years to come.

I went into this with practically no off-road driving experience, yet impressed my two seasoned passengers with what I was able to do. Granted, I have little as a basis for comparison, but I wasn’t expecting this truck to feel so smooth on rougher terrain. We drove on an off-road track about an hour outside of Phoenix, spending the better part of a day there. Some of the uphill and downhill paths presented more challenging forward progress, so I tried to angle the tires to go over the rocks sticking out along the way.

The Adaptive Air Suspension offers nearly 16-inches of ground clearance, which helps protect the underbody in certain cases. Air Down Mode is interesting in that it uses sensors measuring tire pressure that I was able to manipulate through something called Tire Deflation Assist. Basically, I could select a desired tire pressure on the infotainment screen, where I heard a tone to confirm the tire deflated to that level, and then ran over a thicker rock formation. Why deflate the tires? Because the lower pressure enables greater traction and grip in conditions like that, which also explains why it felt smoother in spite of a pretty bumpy section. 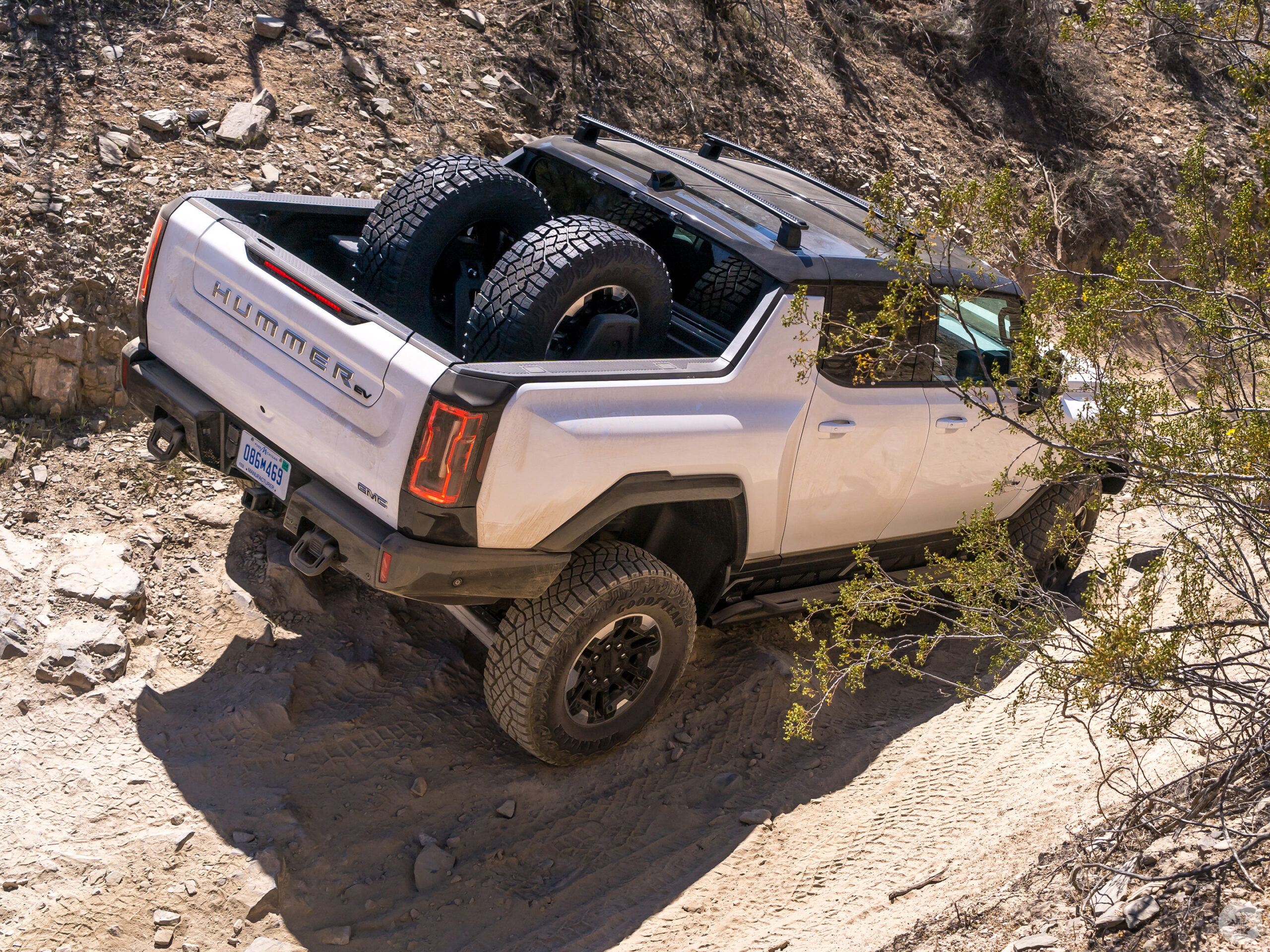 Four-wheel steering helps in certain cases, where the rear wheels can turn in or out to help maneuver the Hummer in tight spots. I didn’t get the chance to “crabwalk,” a slick feature that allows all four wheels to turn in the same direction (up to 10-degrees) and roll in a diagonal direction the way a crab does. As cool as it looks, it’s not some mode you can turn on and start doing crazy things at high speeds. It only kicks in at slow speeds, made clear when looking at it on the infotainment screen.

On regular roads and highways, this thing drove as smooth as can be. It supports Super Cruise, GM’s Level 2 autonomous driving mode, so hands-free cruising is a thing here, too. That includes automatic lane changing on 322,000 km of roads in Canada and the United States. I fully expect that Ultra Cruise, a more advanced version, will likely be part of this when that goes live in the next couple of years.

Of the 65,000 reservations GM took for the Hummer EV, it claims 95 percent of them converted to actual orders. Many won’t see them roll off the assembly and into their hands until 2024, but Canadians can start getting theirs in the spring of 2023. It won’t come cheap based on price tags right now, which amount to $110,259 USD (roughly $138,277 CAD) for the Edition 1, and starting at $79,995 USD (about $100,286 CAD) for future models. I’m using U.S. pricing because GM hasn’t confirmed what the vehicle will cost in Canada, even though you can reserve one at a participating dealership. 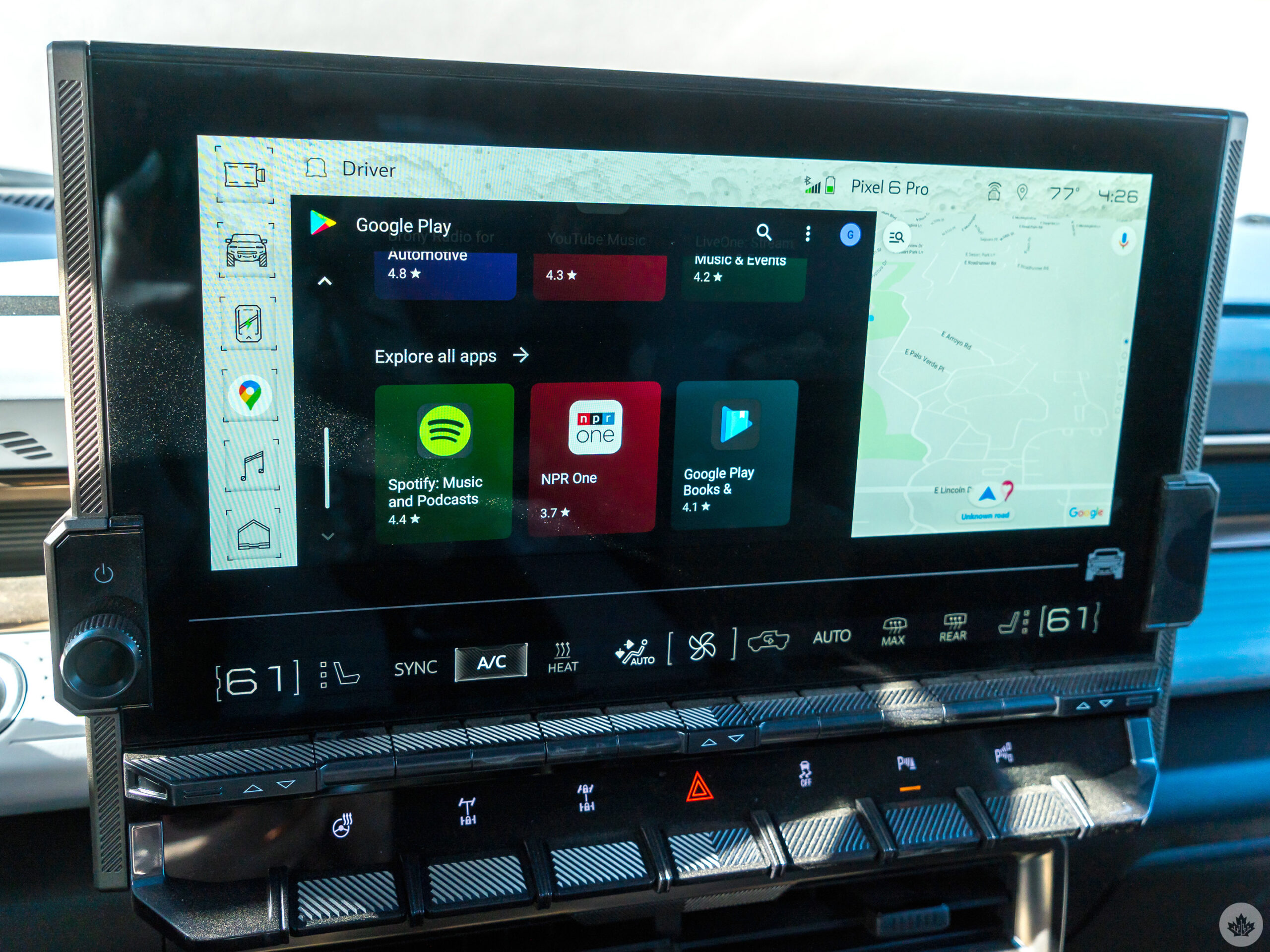 GM’s pivot to EVs isn’t a secret, especially since the company talks about it all the time, but it is interesting that a bigger one like the Hummer EV will probably play a bigger role in pushing that focus forward. The branding will also get its own push, and I imagine we’ll be seeing it emerge again as a luxury statement in pop culture.