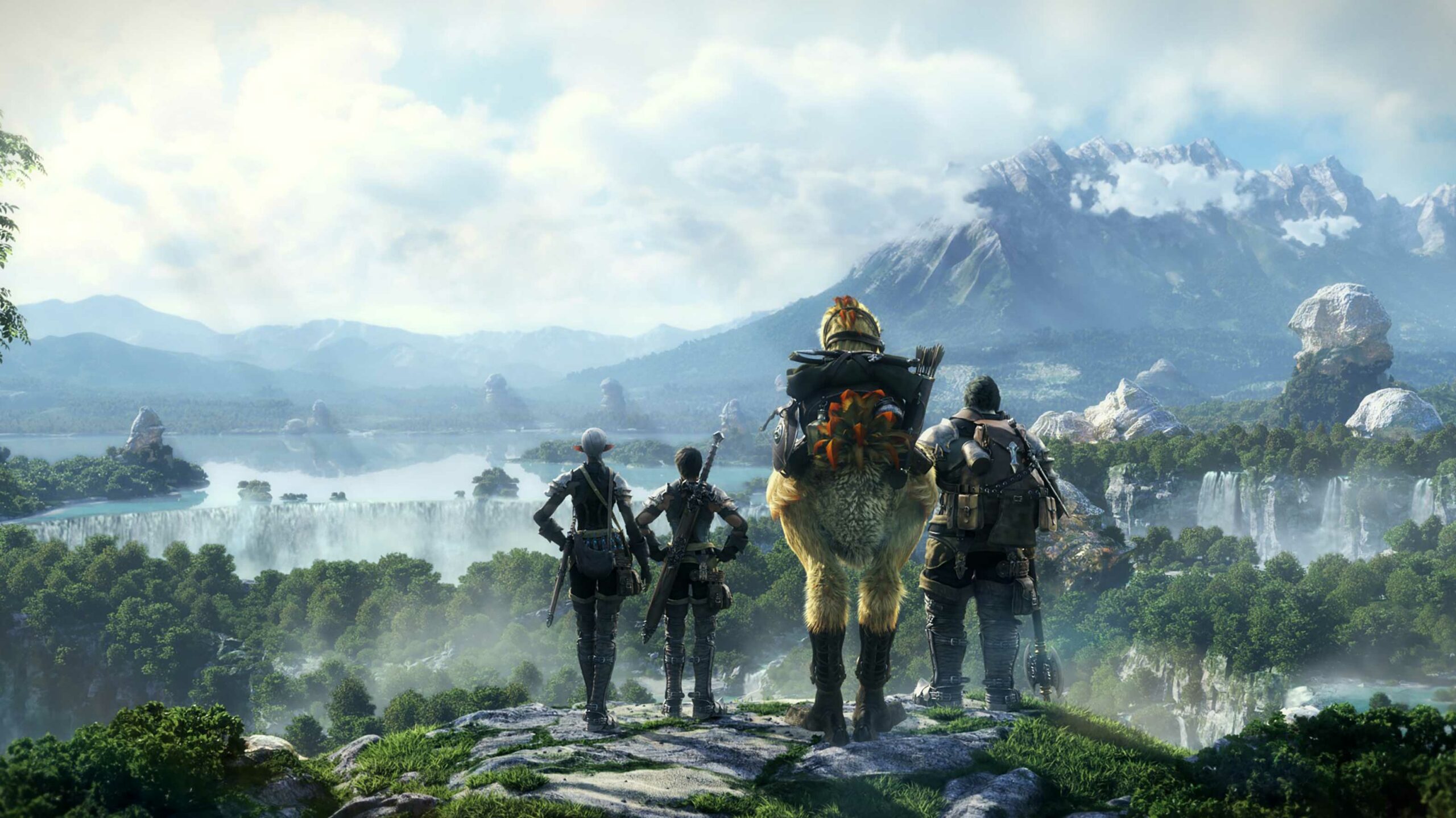 For the past year, Wednesday and/or Saturday nights have been all about Call of Duty for my friends and me.

We got into a pretty consistent routine of jumping into Warzone or Cold War for some reliably fun multiplayer action. As COVID-19 restrictions lifted and vaccinations were received, online friends even became IRL ones. It was great.

However, we’ve stopped playing the past couple of weeks following numerous allegations of widespread sexual harassment and other forms of abuse at Call of Duty publisher Activision Blizzard. The company’s games sadly feel tainted now (especially as new accusations surface almost daily), and some have even called for a boycott altogether (which we’re supporting in solidarity).

All of this is to say that I’ve been looking for a new multiplayer experience to fill the void. As it turns out, that game was Final Fantasy XIV. I’m by no means alone in this; even before the Activision Blizzard reckoning, longtime World of Warcraft players had already been jumping ship to Square Enix’s second Final Fantasy MMO.

But it’s an especially notable turn of events for me as someone who has repeatedly tried, throughout the nearly eight years that XIV has been available in its completely overhauled, Naoki Yoshida-directed A Realm Reborn form, to get into the game. I’ve given it several attempts because Final Fantasy is my all-time favourite gaming series — I feel compelled to. But an MMO take on FF — replete with a paid monthly subscription, inordinate periods of tedious grinding and often lengthy wait times to find a raid party — isn’t something I had ever wanted.

Feeling a bit empty without my weekly game nights and hearing unending praise from three friends who are ahead of me, though, I kept with it. After all, I haven’t stopped hearing how much better the game eventually gets after its initial growing pains. And while I normally dislike the “it gets good after [insert hours] here” argument (which people regularly use to defend the underwhelming Final Fantasy XIII), I’ve found that this is undeniably true with XIV.

“towards the end of its first half, I would argue, is where ARR really gets interesting.”

Essentially, the game’s base campaign — generally referred to as A Realm Reborn (ARR) — is split into two halves. The first half, “Seventh Umbral Era,” is a few dozen hours long and is largely where you do a seemingly infinite amount of fetch quests and other grating errands for the Scions, the protectors of the peace in the world of Eorzea. I could only take so many “slay three of this creature” or “talk to five of these NPCs” quests before beginning to lose interest. But it’s also an oddly relaxing experience; slap on a podcast (or even just absorb Masayoshi Soken’s excellent score) and it becomes a fair bit more palatable. 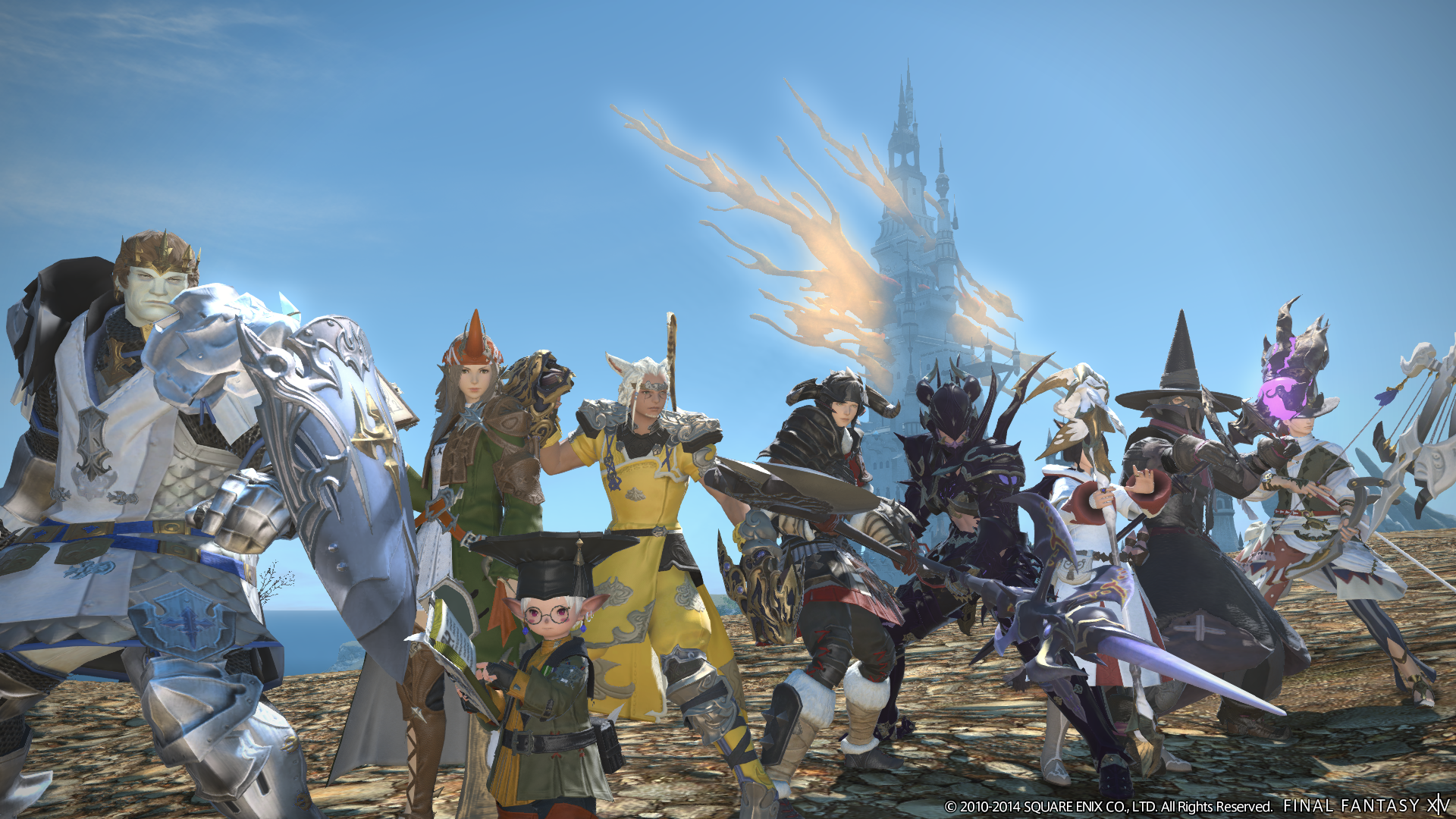 And it’s towards the end of Seventh Umbral Era, I would argue, where ARR really gets interesting. The villainous Garlean Empire (who are nostalgically reminiscent of FF XII‘s armour-clad Archadian regime) raises the stakes with some deadly threats that are clearly inspired by classic Final Fantasy foes. As a result, the plot gets tenser, the characters become more interesting (especially, in typical Final Fantasy fashion, one named Cid) and the raids get bigger and more engagingly complex.

This all segues into ARR‘s latter half, “Seventh Astral Era,” which has some of its own pacing issues but is surprisingly compelling overall. This section is, ostensibly, about the rise of the Scions as they try to clean up the mess left by the Garleans and the enigmatic Ascians who manipulated them. The narrative truly hooked me here. Outside of Final Fantasy Tactics and the aforementioned FFXII (both set in director Yasumi Matsuno’s world of “Ivalice”), Final Fantasy stories have never really had politics at their centre.

Suddenly, though, XIV was completely winning me over with a gripping tale rife with political intrigue. In opening up the world of Eorzea in Seventh Astral Era, XIV places you at the heart of a rather riveting geopolitical game with all kinds of duplicitous figures. Seeing how the different factions navigate growing civil unrest as dark forces pull the strings from behind was much more interesting than the far more generic “stop the monsters” story beats of Seventh Astral Era.

Meanwhile, returning characters become further developed and are finally given their moments to shine. My favourite of these is Alphinaud, who faces his own struggles as he tries to lead a new generation of heroes. I know he plays a big role in future expansions, so I’m already eager to see where the story takes him. But even this early, there’s already been a payoff and growth to the seeds planted in Seventh Umbral Era. All told, ARR‘s second half is roughly the same length as the first, which I’d normally want to be shorter, but that’s thankfully not an issue due to much better pacing and more streamlined quest design. 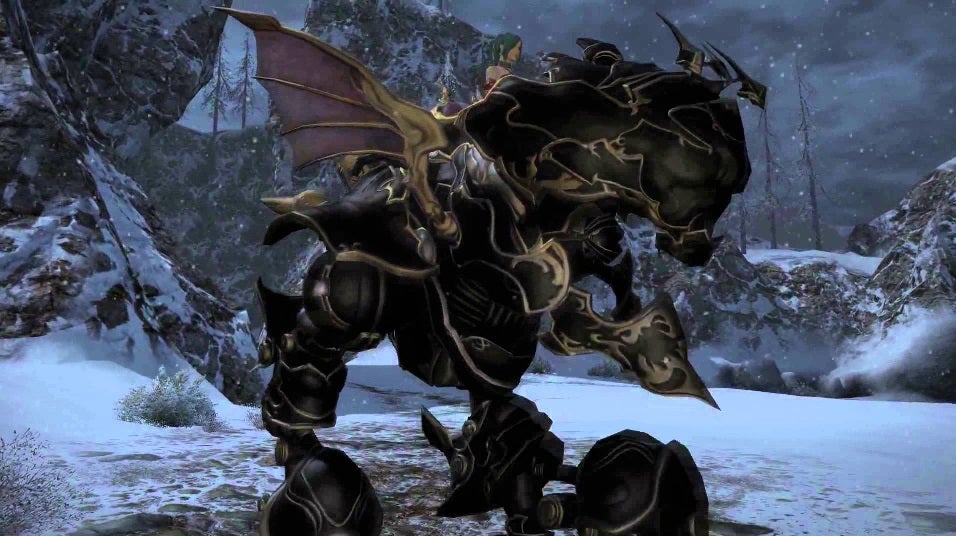 I was also delighted to find many more of XIV‘s love letters to the Final Fantasy games of old — the highlight being the massive Gold Saucer game centre based on the eponymous theme park from my favourite game of all time, Final Fantasy VII. I also recently beat Final Fantasy III (originally released on the NES in 1990) for the first time, and that, too, has been represented in XIV through a cool series of “Crystal Tower” quests. I even got a flying mount based on the iconic Magitek Armour from Final Fantasy VI, which, as a nice touch, plays Nobuo Uematsu’s incredible “Terra’s Theme” as you ride it.

ARR eventually culminates in an intense Game of Thrones-esque grand finale that directly leads into XIV‘s first expansion, the universally praised Heavensward. I’m only a few quests into that at the moment, but already I’m in love with how it’s continuing the story with new characters, areas and music. I’m further encouraged by the fact that this is where everything really becomes next-level, per my friends and the rest of the fanbase.

“If FF XIV is this good already, I absolutely can’t wait to see what comes next.”

Best of all, outside of the admittedly prolonged early stretch, the game is easier than ever to jump into in a number of ways.

Most importantly, as is practically meme-ified at this point, there’s a free trial that takes you through Heavensward up until level 60. But even beyond that, I’m happy to be able to support the game with a clear conscience, unlike any titles from Activision Blizzard. Square Enix’s Creative Business Unit III, the team responsible for XIV, is highly regarded in the gaming industry. In fact, a big reason why there’s so much excitement for Final Fantasy XVI, the series’ next single-player entry, is because Business Division 5 is developing it.

Although I’ve only casually followed XIV over the years, I’ve admired how Yoshida and his team have greatly expanded upon the game with the feedback, support and inclusion of the players. Just take a look at the tearful reactions above from Yoshida and players as Soken takes to the stage at a May fan event to reveal his battle with cancer. Upon this discovery, fans affectionately got “Welcome back, Soken” trending on Twitter. Around the same time, players held touching in-game tributes for Kentaro Miuri, the Berserk manga creator who passed away due to acute aortic dissection. You can really feel the warmth and passion from everyone involved in the game — the creators and fans alike.

Indeed, the XIV community that Square Enix has built up over the years is one that I’ve really come to appreciate now that I’m slowly joining it. While it’s sadly far too common to find toxic gamers online (especially in Call of Duty), the XIV player base is overwhelmingly positive and has made me — an MMO newcomer — feel quite welcome. Helpful tips and friendly farewells are plentiful whenever I do a raid. If I’m running through a town, I’ll often come across players using in-game instruments to perform classic music for one another, such as The Legend of Zelda‘s iconic “Song of Storms.” I even had one pleasant random person I raided with follow me outside the dungeon and, without me even asking, graciously send over high-level gear for my spear-wielding Dragoon. Score! 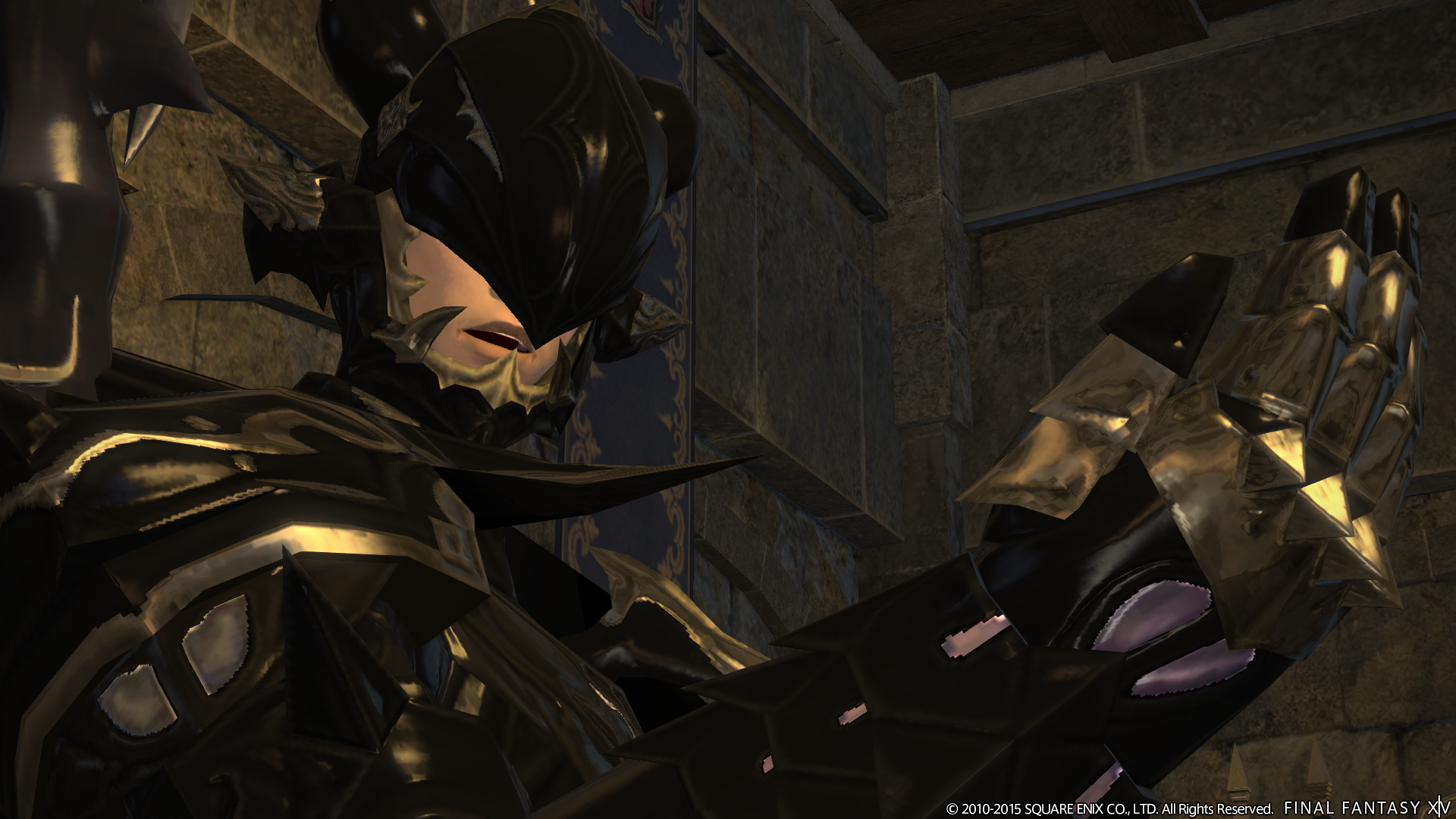 All of this has got me incredibly excited to keep playing. I’m already looking ahead to the Final Fantasy VI raids and the Ivalice-inspired quests (led by Matsuno himself) in Stormblood, XIV‘s second expansion. That’s to say nothing of Shadowbringers, the third expansion, which has Nier content overseen by creator Yoko Taro. And that’s just what I know of; I’m eager to discover the twists and turns of the story, unexplored regions and sublime new music from Soken in the three released expansions and November’s Endwalker.

If FF XIV is this good already, I absolutely can’t wait to see what comes next.