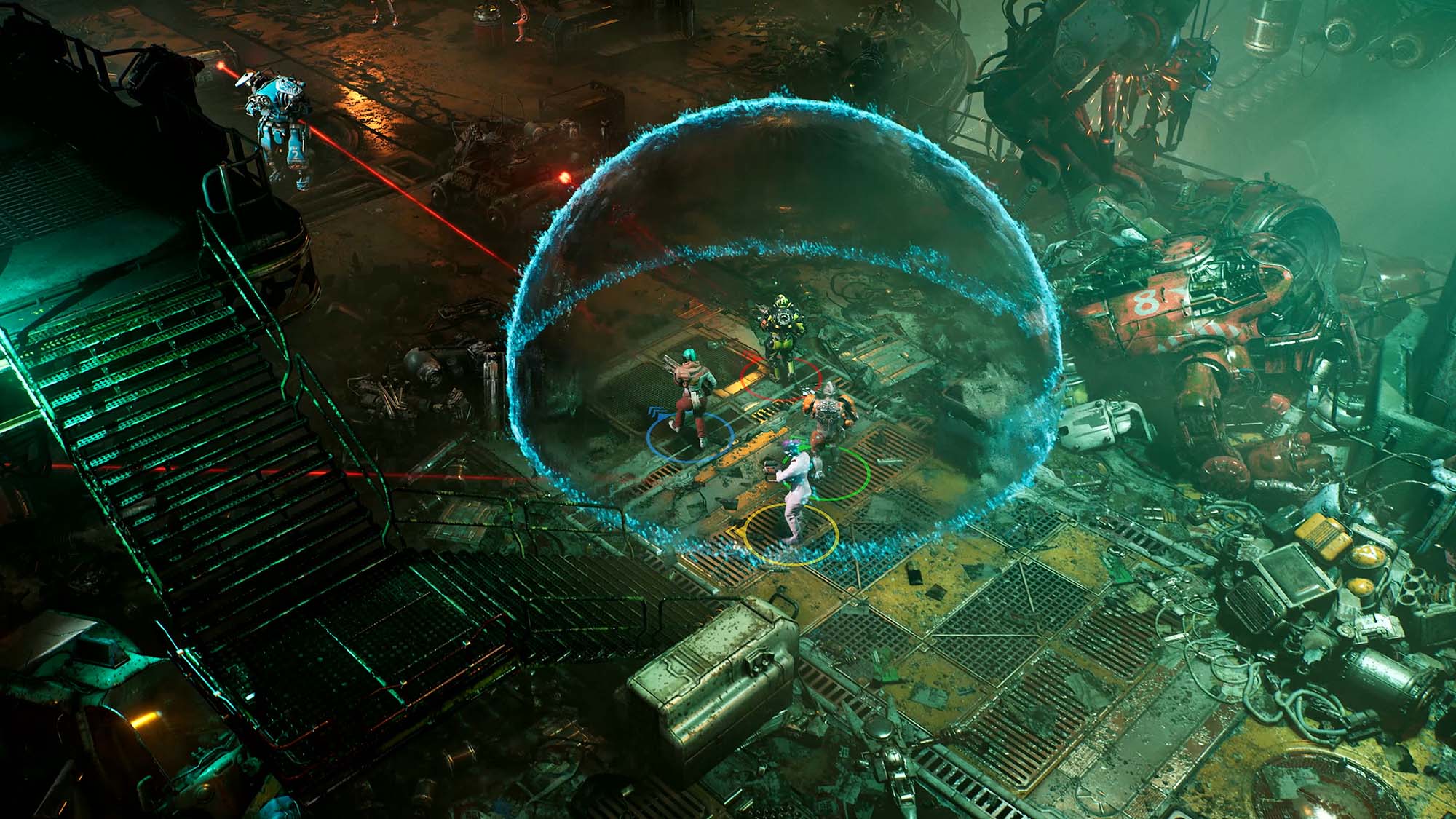 The Ascent, from indie studio Neon Giant, checks off everything you’d expect to see in a cyberpunk-inspired game. Though, once I scratched the surface in this top-down twin-stick shooter, I couldn’t help shake the feeling that the game was getting in the way of itself in some ways.

Set in a futuristic dystopian world known as Veles, The Ascent Group, a corporation that controls the larger population, mysteriously collapses. This then causes anarchy between guns for hire and rival corporations that are fighting for control. Assuming the role of the main character, I stepped into this grimy, neon world and offered my help to anyone paying.

The Ascent is a fast-paced twin-stick shooter that wears its heart on its sleeve. From the moment-to-moment gameplay loop, the game features a familiar hook. Fans of Helldivers, Dead Nation, or Hotline Miami will understand what they’re in for the moment they pick up their first weapon. There’s an interesting cover system at play. To avoid gunfire, I crouch behind cover and manually raise my weapon to inflict critical damage and stagger enemies. This mechanic adds a lot to the combat and keeps it frantic.

I found myself fighting off hordes of your standard fair of underworld gangsters, robots and other threatening foes. Randomly generated ambushes will ensue as you cross the sprawling map of Veles, completing your next quest. In every instance of combat, I found myself having a legitimate blast firing shots and dodging attacks.

“What made me come back to The Ascent repeatedly was its smooth combat.”

You’ll come across many different weapons from pistols, to SMGs, to rifles — all with their own unique stats. It’s fun toying around with each weapon and discovering their quirks and upgrading them along the way. However, as soon as I had to flip through numerous tabs and menus, my enjoyment took a dive.

Neon Giant implemented a vast array of systems and customization options into The Ascent. For a team of roughly around 11 people, the pure ambition on display here must be commended. That said, less could certainly be more in this case. The Ascent features a levelling system where I could invest skill points into anything from health, energy, aiming and critical hits. But throughout my playthrough, I never felt like I reaped the benefits of investing skills into any one segment aside from health and energy. It was as though these passive traits were a bit more passive than I’d have liked them to be. 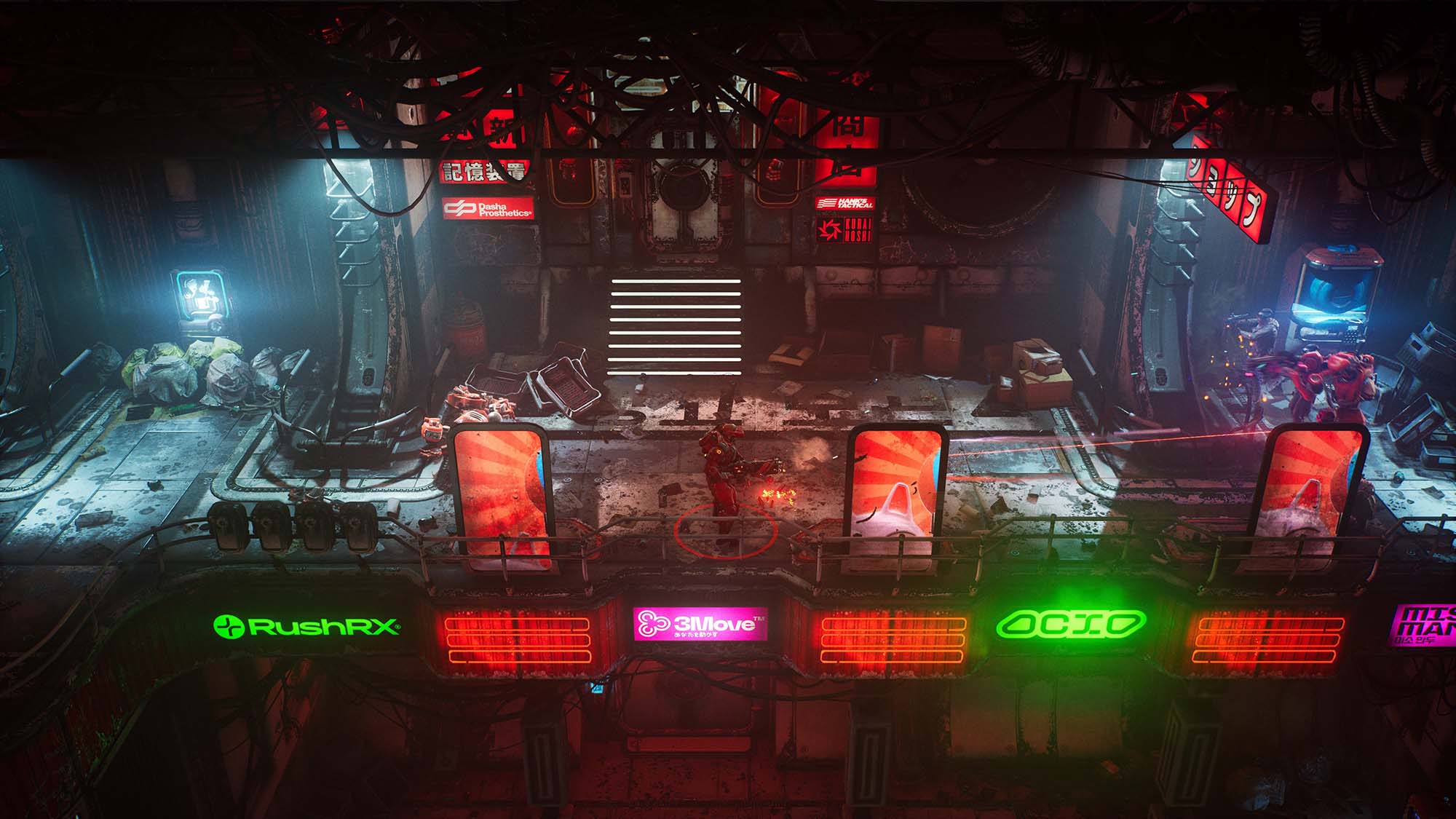 Being a game set against a cyberpunk backdrop, it’s expected that there are character modifications and augmentations. As such, The Ascent features customization in the form of appearance, cosmetics and armor. All these options are supposed to make you feel empowered by the character you’ve made. Though, I never felt like I was playing a role more than I stepped into the shoes of a generic gun-wielding merc.

The overemphasis in delivering a robust RPG even affected navigation and character interactions. The map itself is pretty cumbersome and leaves a lot to be desired in terms of pinpoint accuracy as quest markers will often be in the incorrect spot. The Ascent offers two fast-travel systems, both of which will bring you to one of the many hub areas. Once again, though, the navigation system doesn’t always provide a reliable destination. All this to say, be prepared to retrace your steps again and again as you complete quests across Veles. 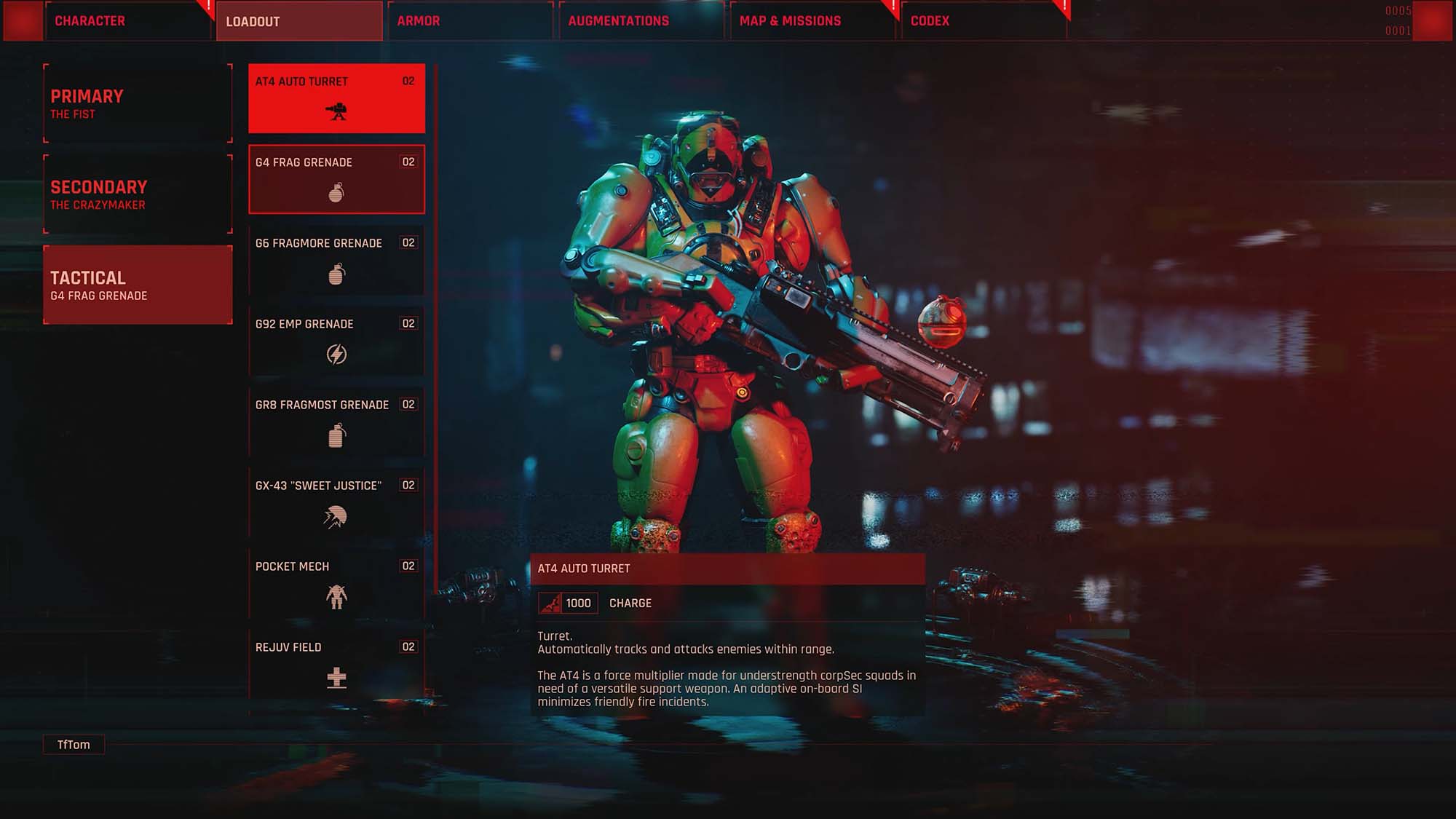 As a chromed-out mercenary, you’ll interact with plenty of folks deep within the underbelly of Veles. Unfortunately, beyond a chosen few, you aren’t introduced to anyone of consequence. Most NPCs are nameless aliens and their quests are ultimately forgettable. Even the main narrative touches on many cyberpunk tropes but never stuck or resonated in a meaningful way. I had no attachment to anyone I met which is a shame because Neon Giant sets up such an interesting world to explore.

Playing on Xbox Series X, the style and art design of The Ascent looks superb. There is so much attention to detail to making Veles feel like a downtrodden and polluted landscape that I found myself admiring my surroundings as I advanced through the game. Load times are practically nonexistent. 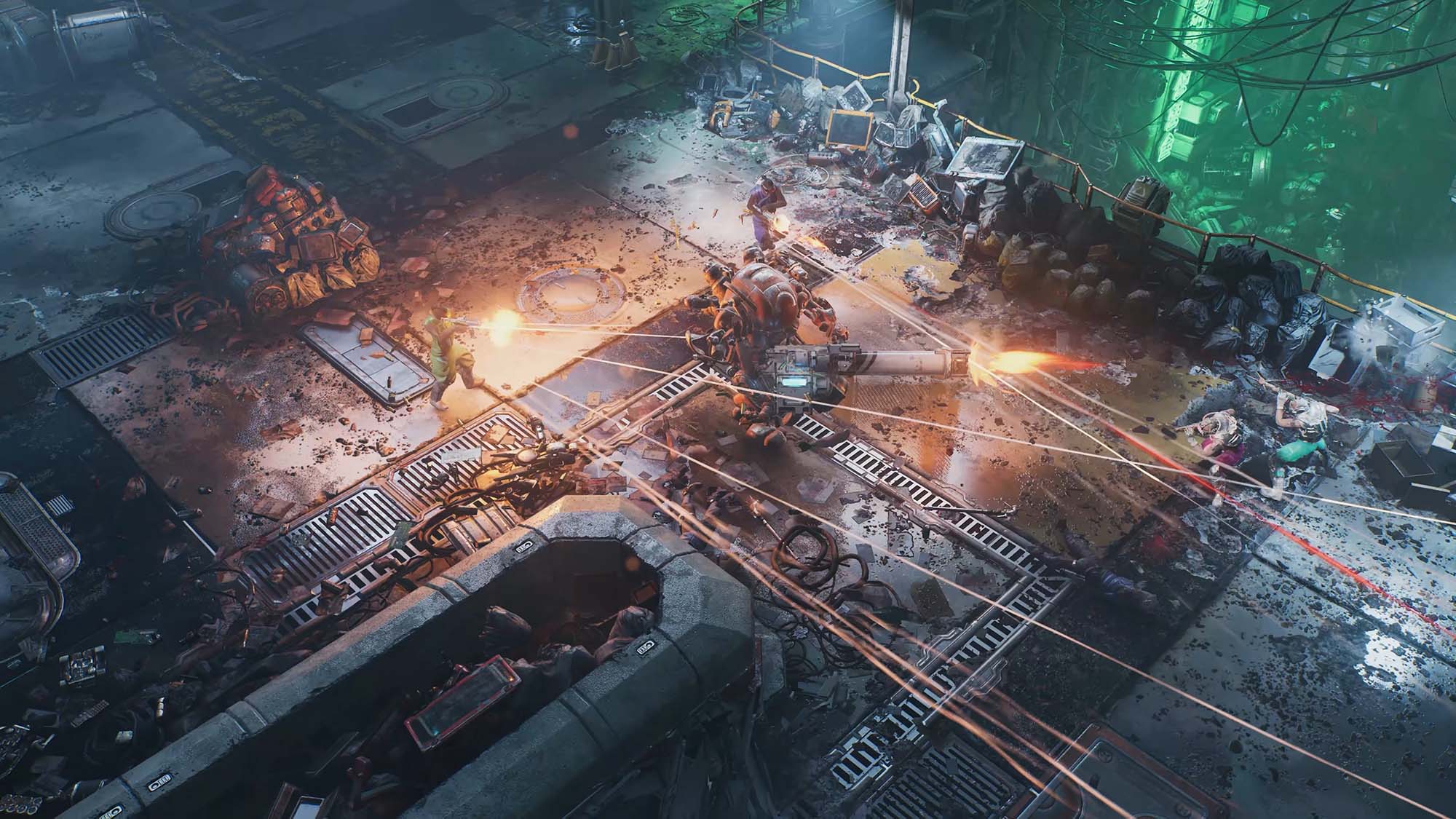 Whether I was fast travelling or using the many elevators to venture from one level of Veles to another, I was back into the game in mere seconds. For lore junkies, The Ascent has a rich codex to read through. Personally, I was never compelled to dive into it. However, players who are more enthralled with the game’s world may find a lot of value there.

What made me come back to The Ascent repeatedly was its smooth combat. There’s an addictive quality in its difficulty. For example, after having my skills bested by a particularly difficult boss, I immediately wanted to try out a new tactic and see victory through to the end. The game can be played entirely as a single-player experience, though it does support up to four-player co-op both locally and online. 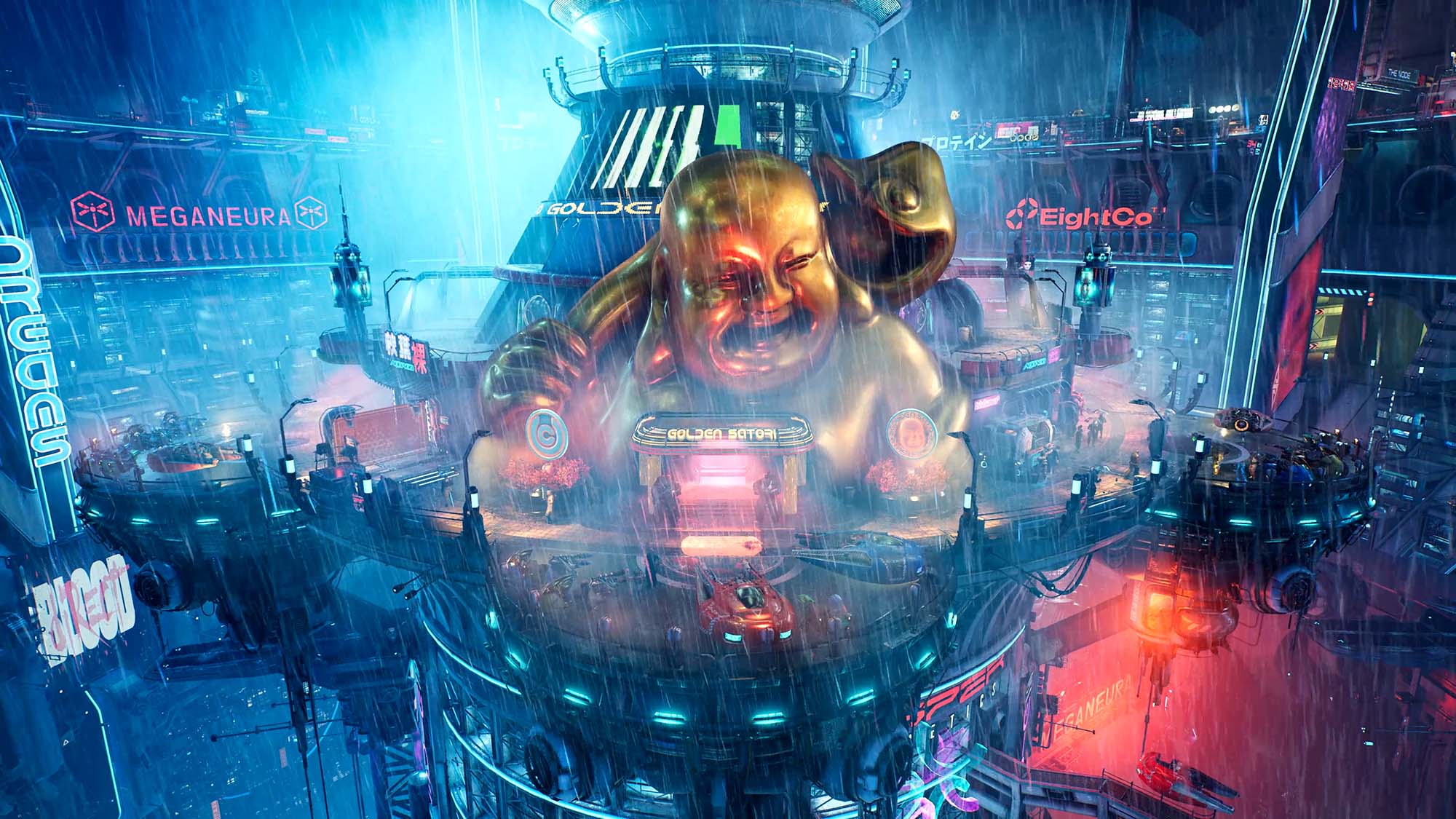 I truly believe this is where the game shines. Even those tedious runs from one location to another are a lot more fun with company. Having the ability to play with friends made my experience much more memorable. Each player can come into the game with their own loadouts and bring something unique to the table during combat. Boss battles are also made easier when jumping in with other players. Each member can play their role and the group can form new strategies.

“Simplicity could have gone a long way to making The Ascent a standout title this summer.”

However, it’s important to point out that the game’s multiplayer is currently pretty buggy, with some players experiencing crashes and issues related to joining games.

The Ascent offers a solid foundation with a compelling gameplay loop. Fans of the cyberpunk genre will likely find a lot to enjoy. With that said, I wish The Ascent boiled down the best parts of a rock-solid twin-stick shooter experience while easing up on the RPG systems. Simplicity could have gone a long way to making The Ascent a standout title this summer.

The Ascent is currently available on PC, Xbox One, and Xbox Series X/S. The game is also available through Xbox Game Pass.