The Yoga C940 is a sizable laptop, but the unique design allows for powerful flexibility 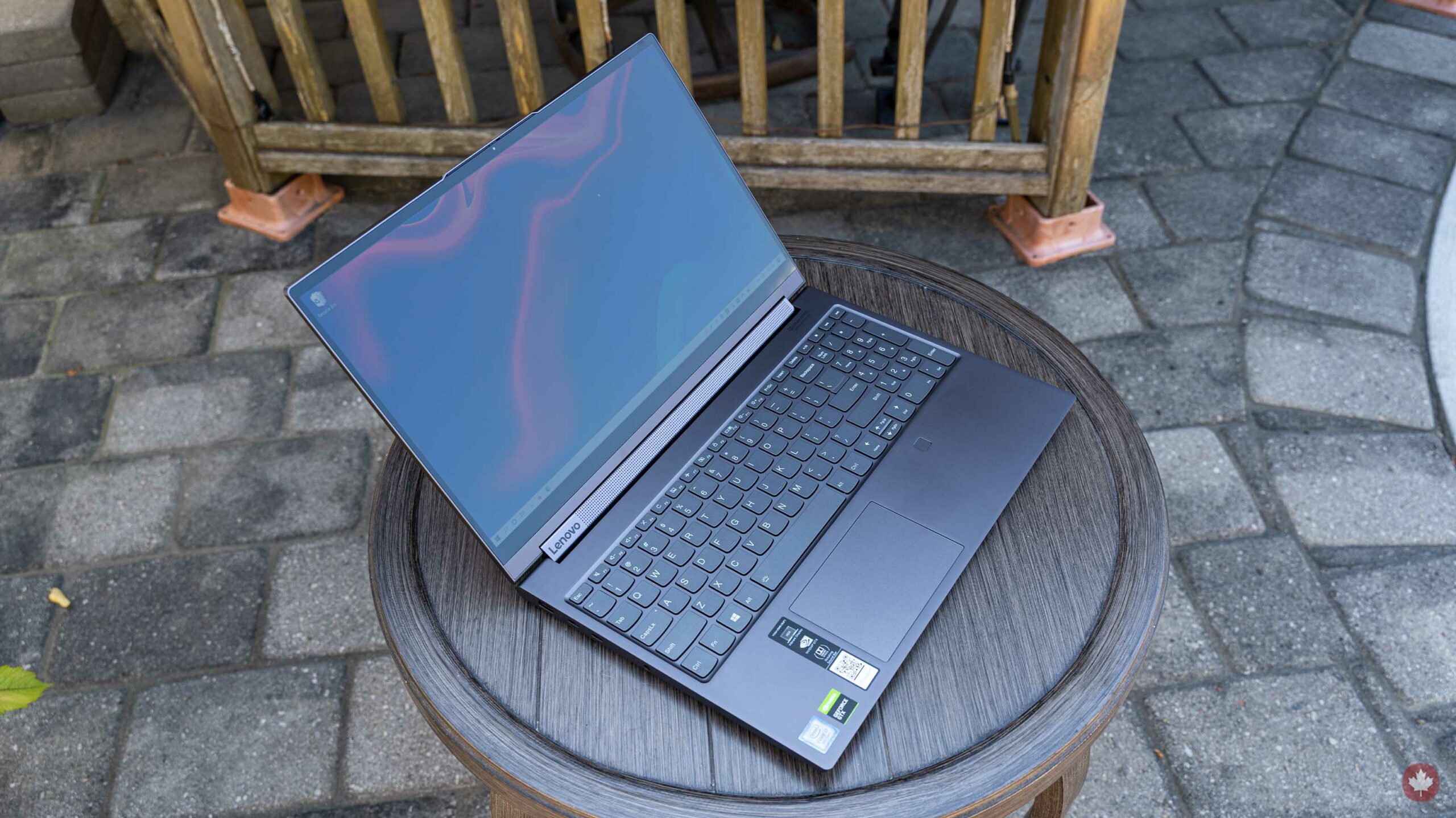 When I first got my hands on the Lenovo Yoga C940, I was a little dismayed. I tend to prefer smaller, sleeker laptops that are light and easy to carry around. The last Lenovo laptop I reviewed, the ThinkBook 13s, was easily one of my favourite Windows laptops for that very reason. While the Yoga C940 certainly isn’t the lightest laptop out there, it still impressed me.

There’s a lot to like about the Yoga. From its unique design to its powerful specs, on paper it seems great. In practice, I found it lived up to the expectations, although some shortcomings did hamper the experience.

Despite those issues, Lenovo’s Yoga offers excellent functionality. On the one hand, it’s a high-end, powerful computer. However, thanks to a unique hinge mechanism, it also folds up into a tablet and comes with a pen for inking and drawing.

I found the Yoga actually offered a similar experience to the Microsoft Surface Book 3, albeit with a more solid build quality. There are some key differentiators, but overall, the Yoga could be a great option if you need a powerful yet portable PC capable of drawing and more. 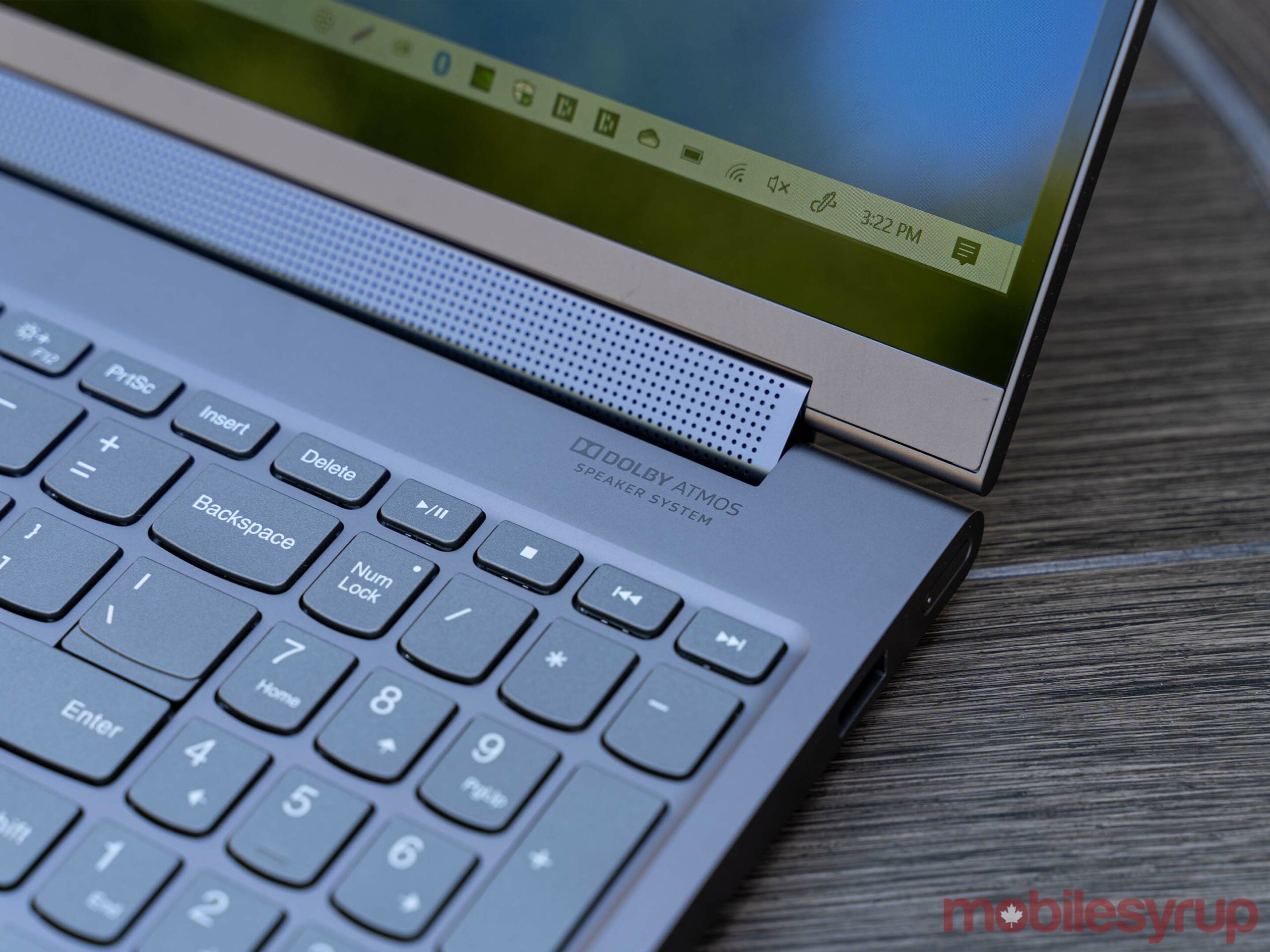 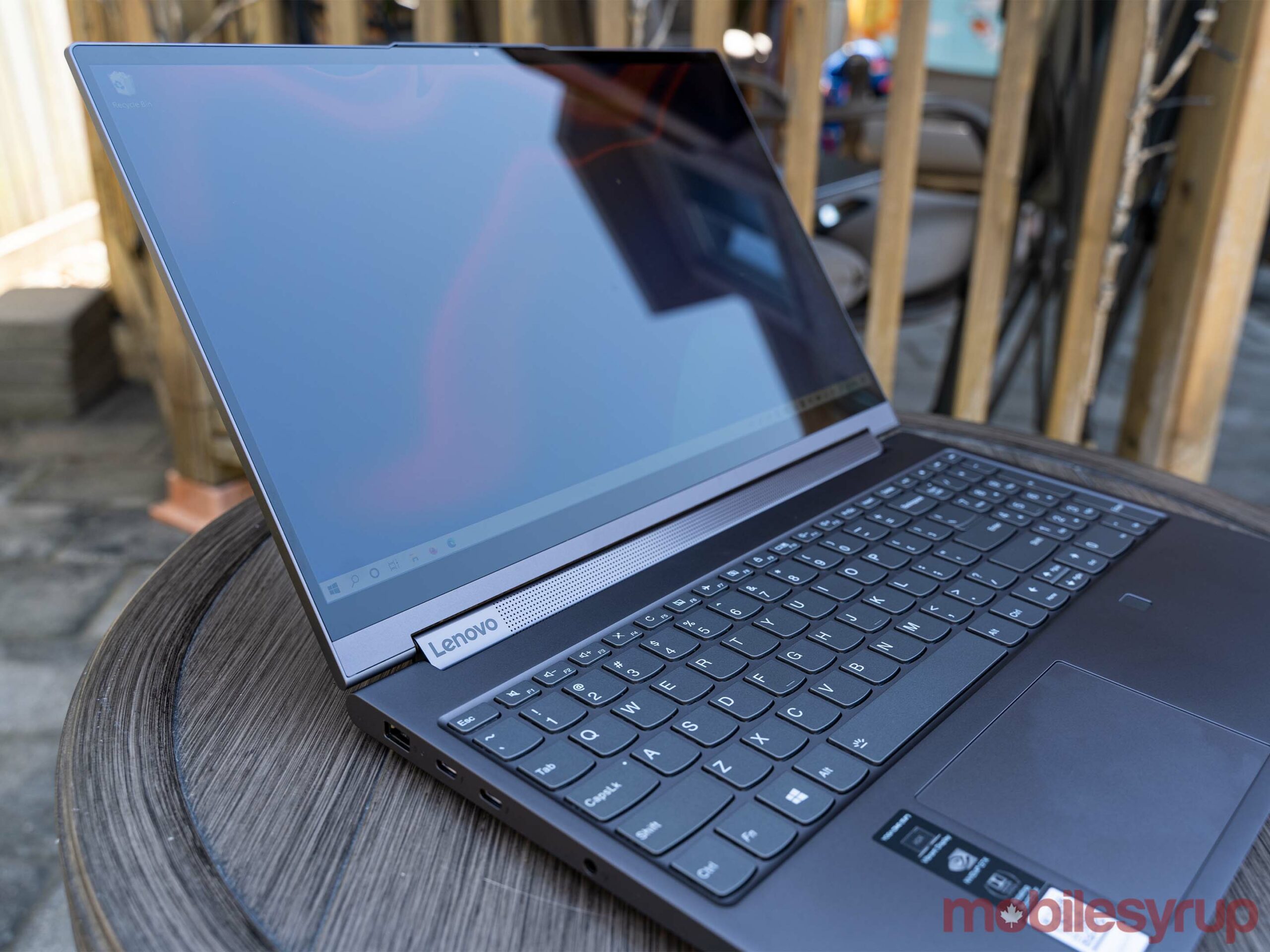 What immediately stands out about the Yoga C940 is the unique hinge. The laptop is split into two distinct halves; the display and the body, which contains the keyboard, trackpad and internals. In practice, it looks quite traditional, but the bar dividing the two halves pulls double duty. Beyond just a cool-looking hinge, it acts as the laptop’s speaker system.

This mini-soundbar, powered by Dolby Atmos, actually sounds pretty good and gets impressively loud. If you like using your laptop to watch videos, the hinge speaker makes for a great addition. It’d work well for gaming too, although I loathe playing anything without headphones.

However, the hinge goes beyond just being a great soundbar. It also enables users to flip the Yoga around in several different forms. There’s the traditional clamshell laptop mode — how I used it most often — as well as folding the screen all the way back so the laptop acts like a tablet. It also works well if you fold it partially back, for example, to hide the keyboard and make the display more prominent (potentially very handy for watching movies or if you want to use your own keyboard) or going into ‘tent mode.’ 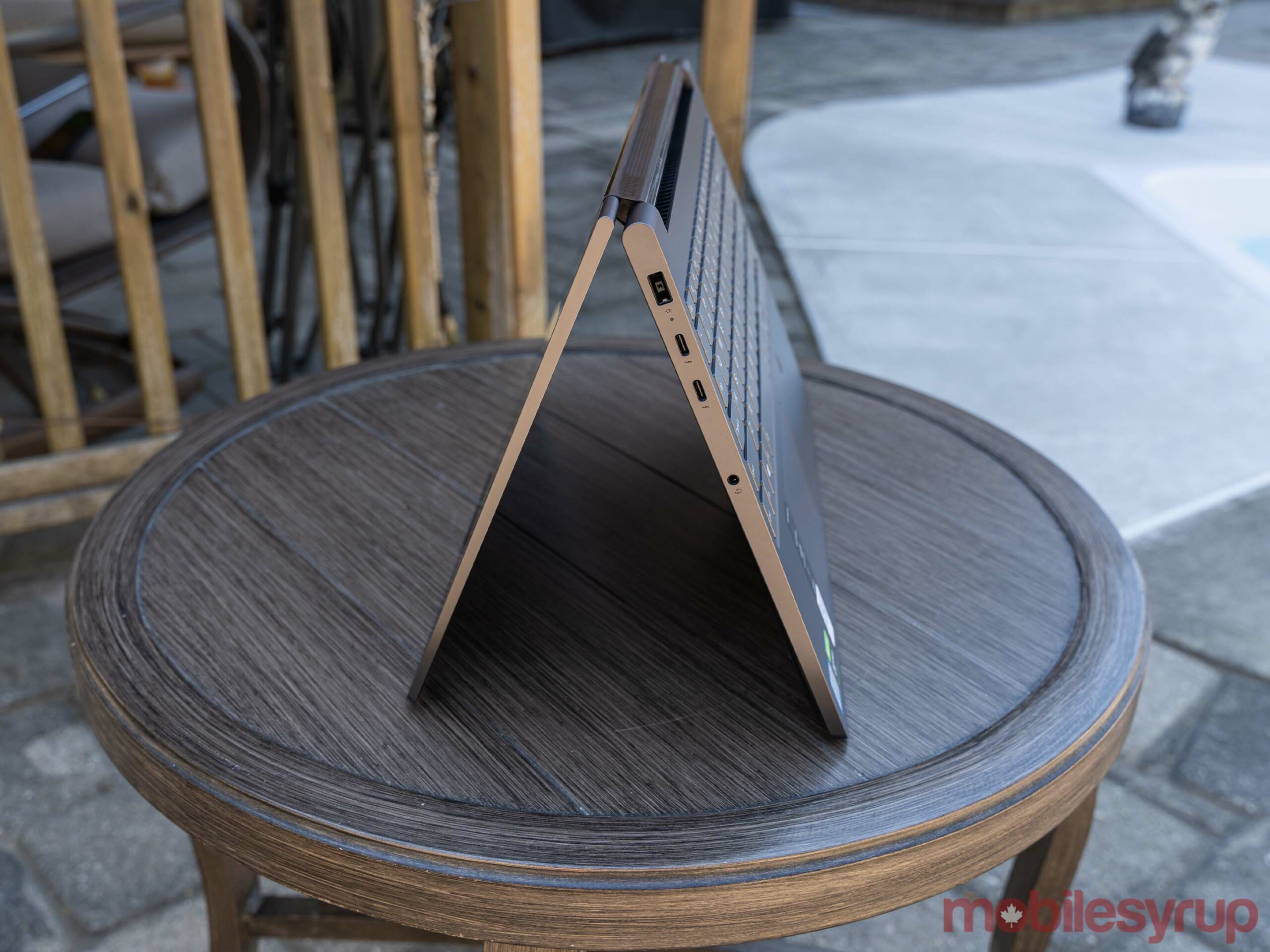 For my part, I found this a much more practical method of converting my laptop into a tablet than, say, Microsoft’s Surface Book 3, which allows you to fully detach the screen. While that makes for a better tablet, you lose out on what’s effectively a built-in kickstand with Microsoft’s design.

Another benefit of having a flexible hinge and not splitting the computer in two is that the Yoga C940 can pack more powerful hardware into the body. Granted, the model I reviewed sported older 2019 hardware, but presumably the 2020 variant of the Yoga can opt for more powerful hardware compared to the Book 3 since it isn’t as restricted by space or design. 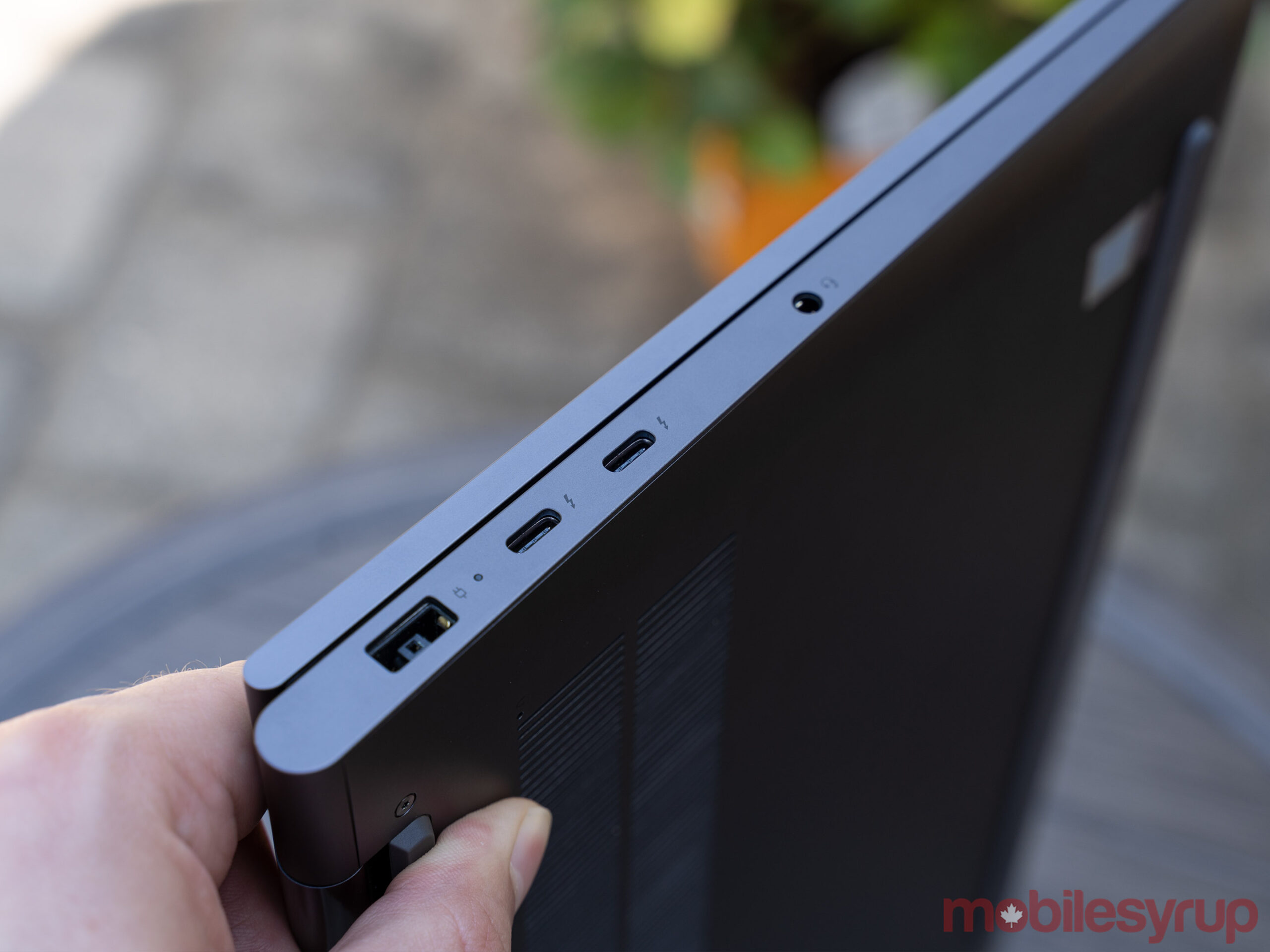 Aside from being an excellent contortionist, the Yoga C940 is also a performance champ. Thanks to its powerful Intel i7-9750H processor and Nvidia GTX 1650 Max-Q graphics, the Yoga can handle just about everything you throw at it.

Throughout my review, I used the laptop primarily for work, which meant editing photos in Photoshop, using a web browser with multiple tabs open, and several other apps like Slack running in the background. The Yoga always seemed to keep up and I didn’t encounter any significant slowdowns or stuttering.

That said, when I did tax the hardware and get the fans spinning up, they were incredibly loud. Granted, the fans kept the laptop cool, but if you work near other people, they may not appreciate the extra noise. 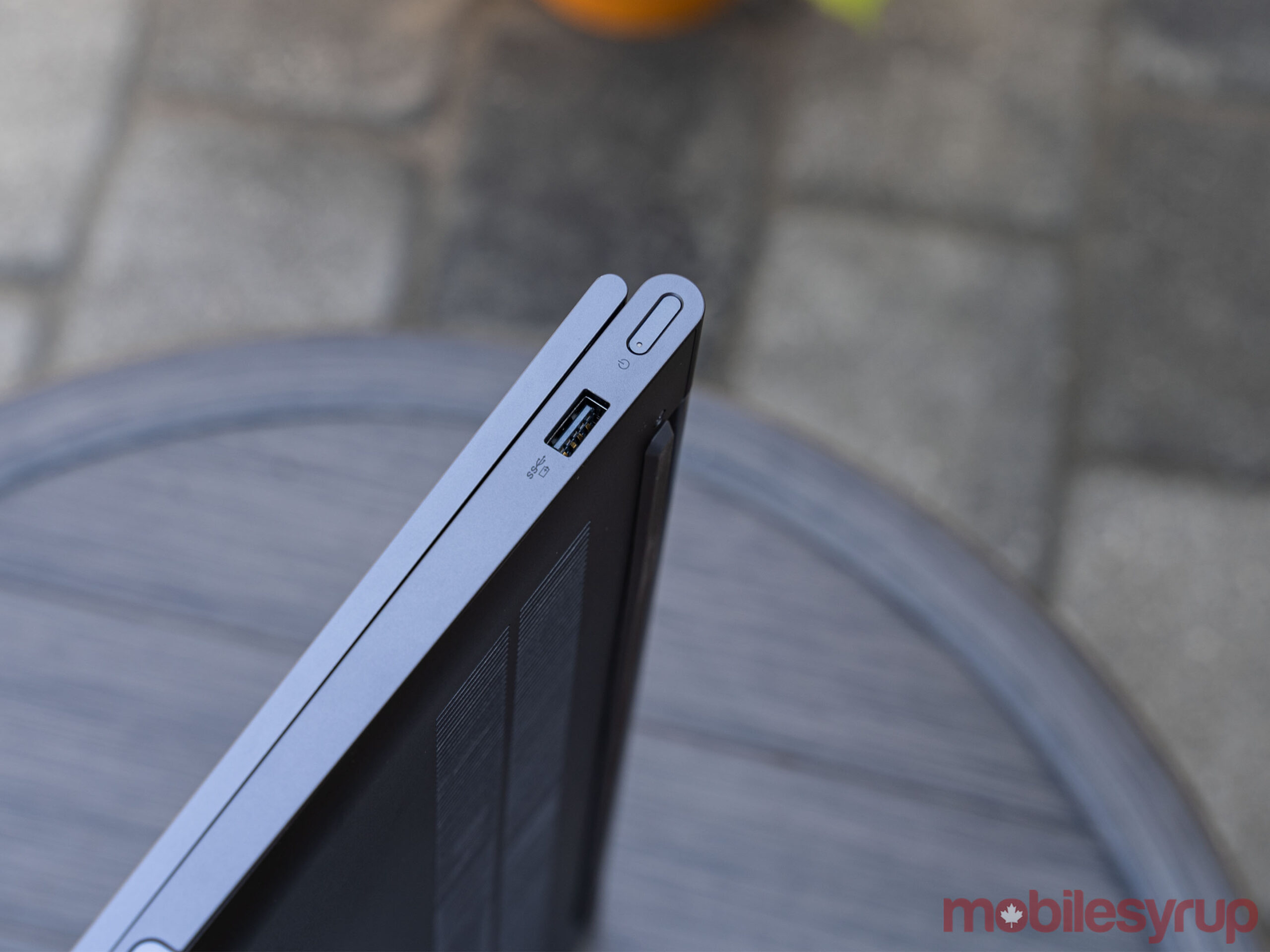 As for gaming, the laptop will likely work well for lighter titles, such as popular esports, or older games. However, don’t expect to load up the latest and greatest at max settings. It’s another area where the Yoga performs well but isn’t the best.

Display almost gets it right 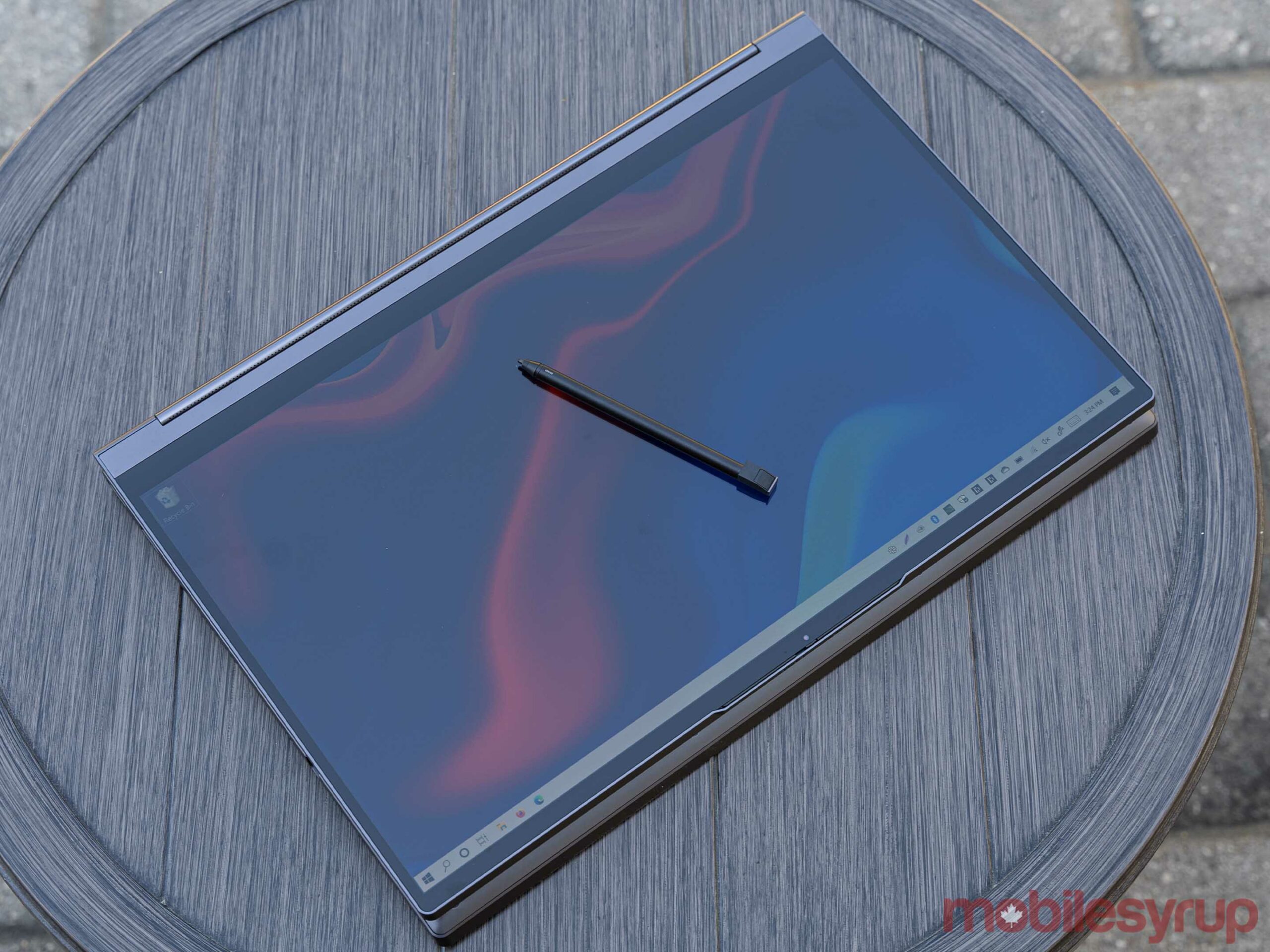 Lenovo equipped the Yoga with a passable 15.6-inch 1080p panel that, for the most part, worked well. While some may scoff at 1080p, I find it a more reliable option than 4K, which can tax the hardware and battery and, at least in this form factor, lead to worse performance and battery life for little benefit.

I still think resolutions around the 1440p mark work the best on laptop screens, offering the better visuals of 4K without hitting the hardware as much. That said, 1080p also works well at this size.

Aside from some oddities with the text on screen — it often looked rough, as if the screen was pixelated despite everything else on screen looking fine — I didn’t have any issues with the resolution. 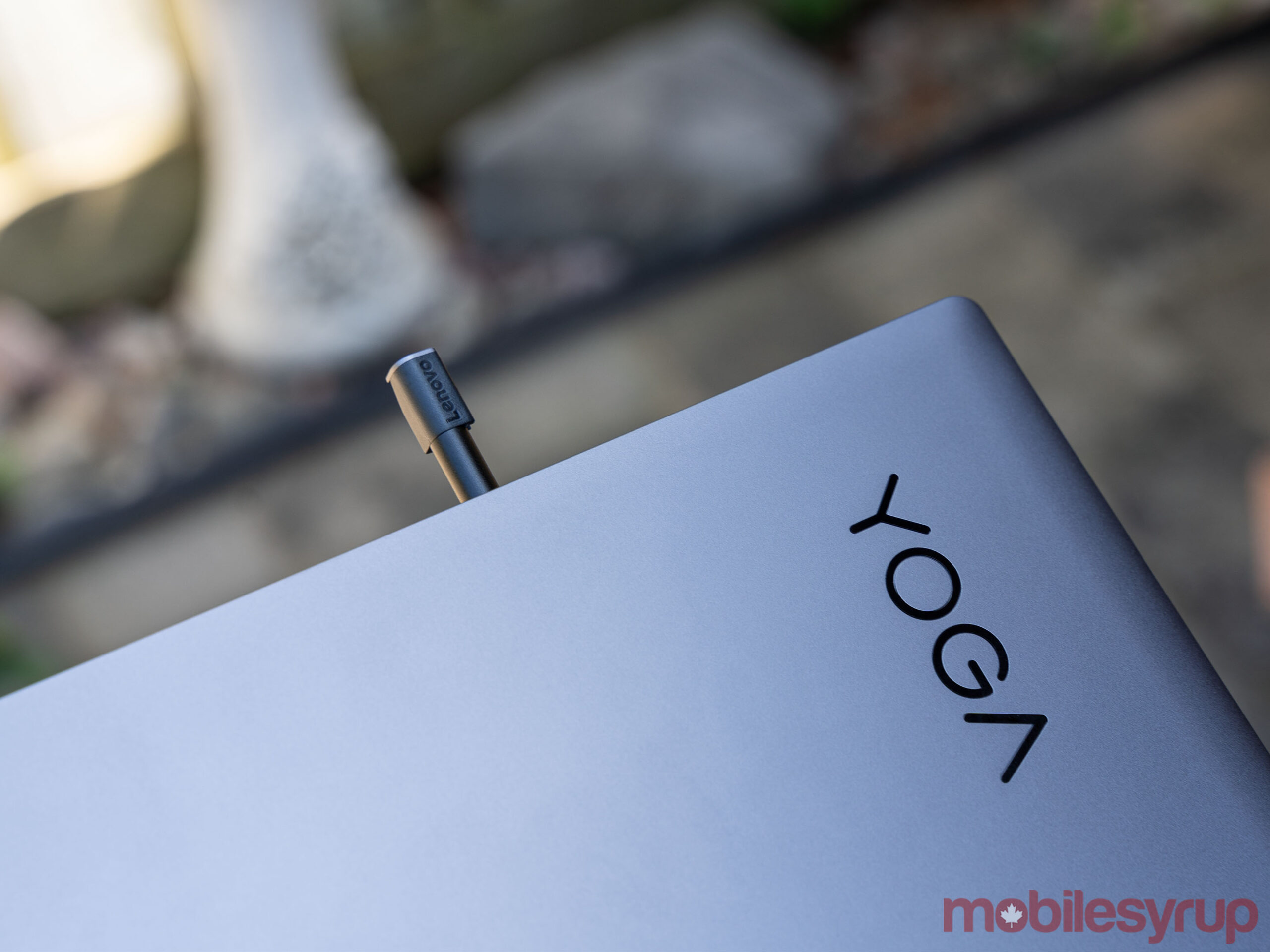 Those who do want the extra resolution can opt for the 4K variant of the Yoga C940. While I wasn’t able to test it myself, it likely will impact battery life thanks to the extra pixels it needs to push.

Further, the colours looked great thanks to the Yoga’s HDR.

I am a little torn since I really liked the matte texture on the Lenovo ThinkBook 13s display. The Yoga, on the other hand, sports a glossy finish. It still looks great, but I definitely miss the matte texture, which made the screen less reflective. 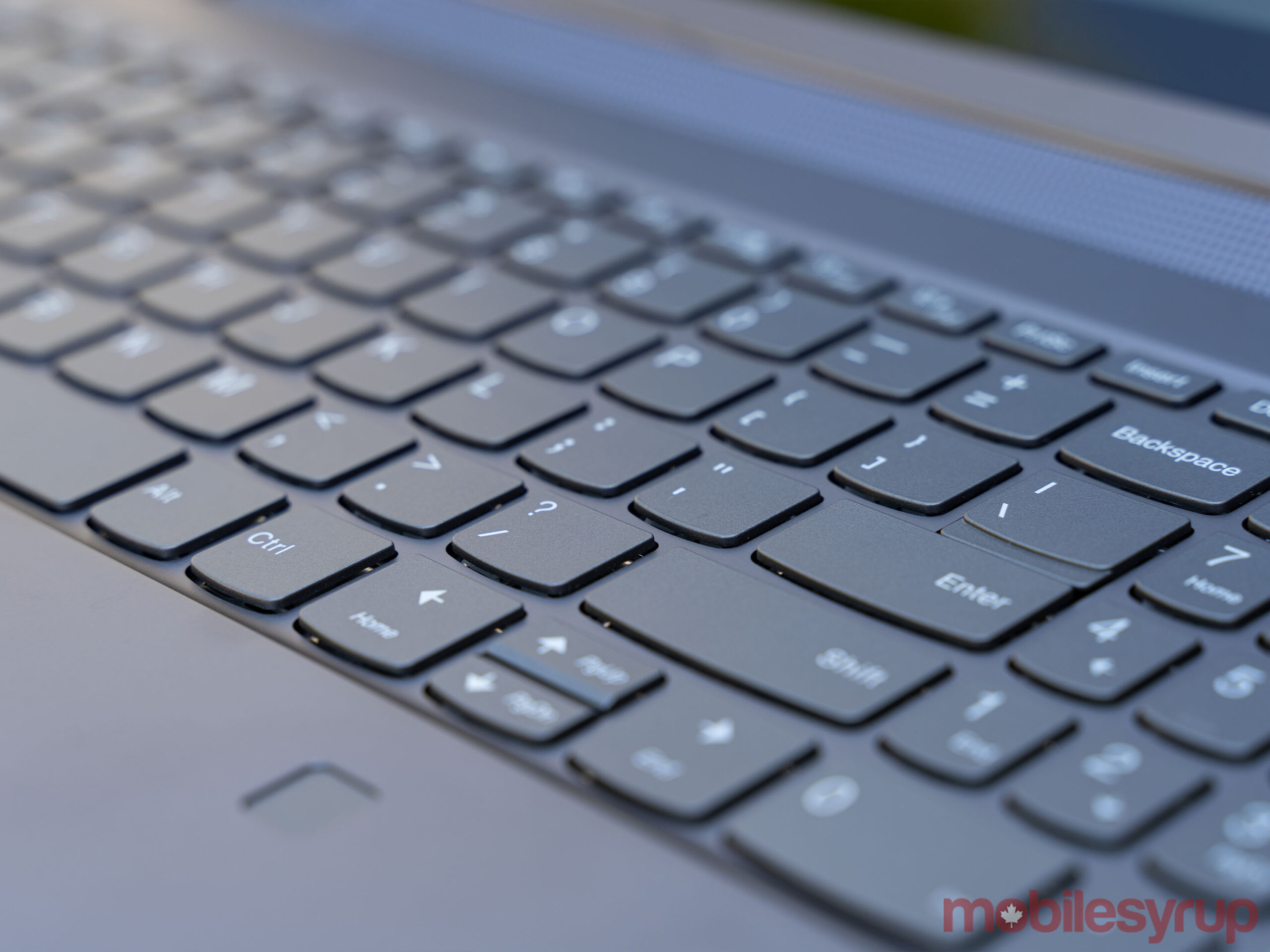 One area I had high hopes for the Yoga C940 was the keyboard. At first glance, the keyboard looks very similar to the one on the ThinkBook 13s. I expected them to feel similar as well, but unfortunately, that wasn’t the case.

First up, the Yoga’s keyboard felt softer, almost mushy by comparison. Considering I had the same complaint about the ThinkBook 13s, it just makes the overall feel that much worse. On the bright side, the keys are nearly silent on the Yoga unless you type really hard. For those who work in close proximity to others, this will be a blessing if they hate your loud typing.

Feel of the keys aside, the typing experience is fine. I could get by with this keyboard, although it isn’t one I would enjoy using.

My other issue with the keyboard is that it feels cramped, especially on the right side. This is mostly because Lenovo included a number pad. There was a time when I would have welcomed the number pad without question. However, I’ve recently upgraded to a ‘tenkeyless’ mechanical keyboard with my desktop and found I hardly missed the number pad once it was gone. 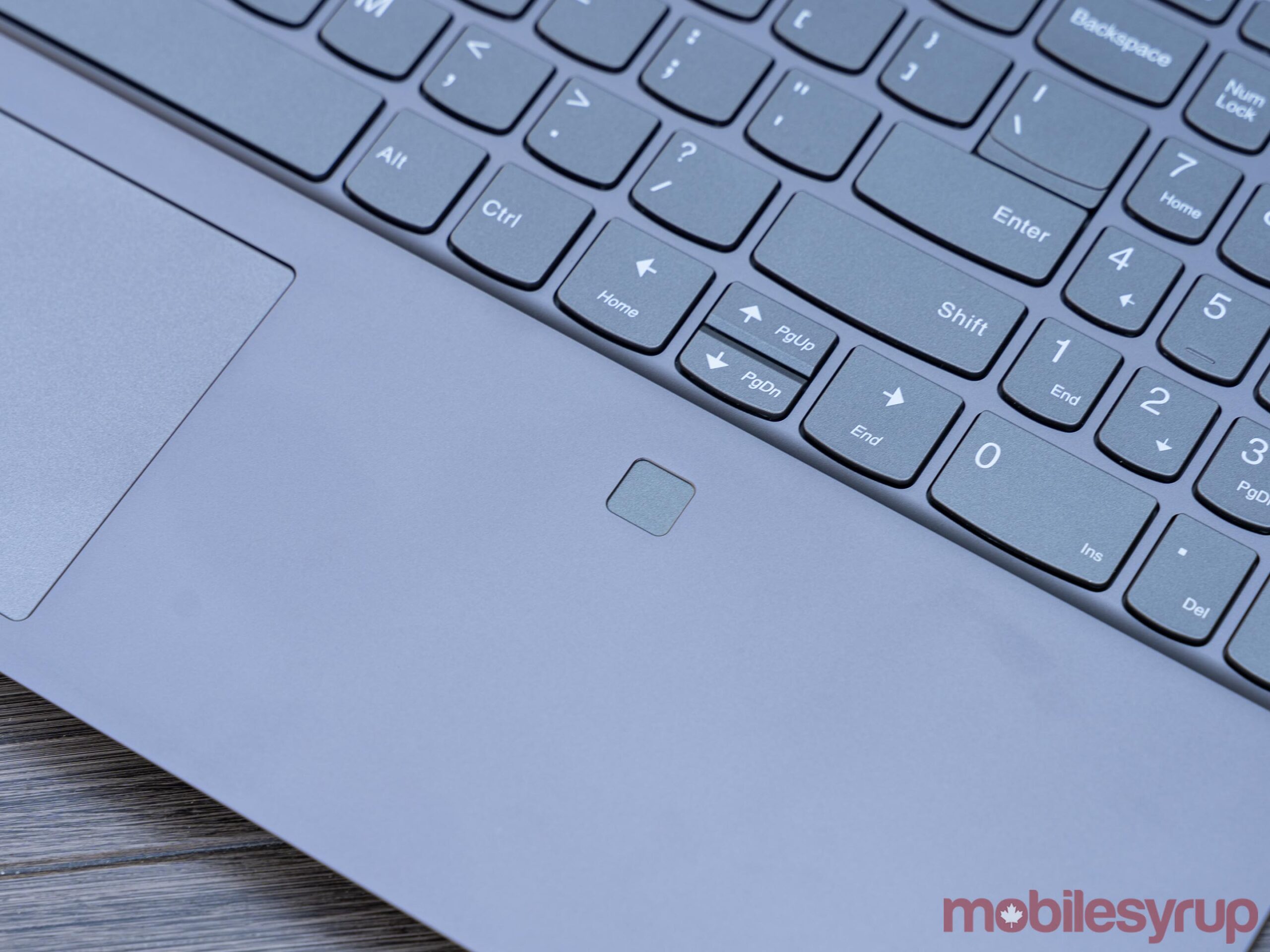 The problem with the Yoga is that to make the number pad fit, Lenovo made the number keys more narrow than the others, which makes it feel awkward. The other, more egregious issue, is that Lenovo also shrunk some of the right-hand keys like backspace. Because of this, I routinely miss the backspace key while typing, and it annoys me to no end. I’m sure someone who used the Yoga keyboard exclusively would eventually get used to it, but in my time with the laptop, I wasn’t able to.

As for the trackpad, the Yoga C940 sports a bigger and, in my opinion, better trackpad than what was on the ThinkBook 13s. Unfortunately, it still pales in comparison to what’s on offer from Microsoft’s Surface laptops or the trackpads on MacBooks.

The Yoga’s trackpad is large, smooth and tactile. It gets the job done, but I’ve used better. 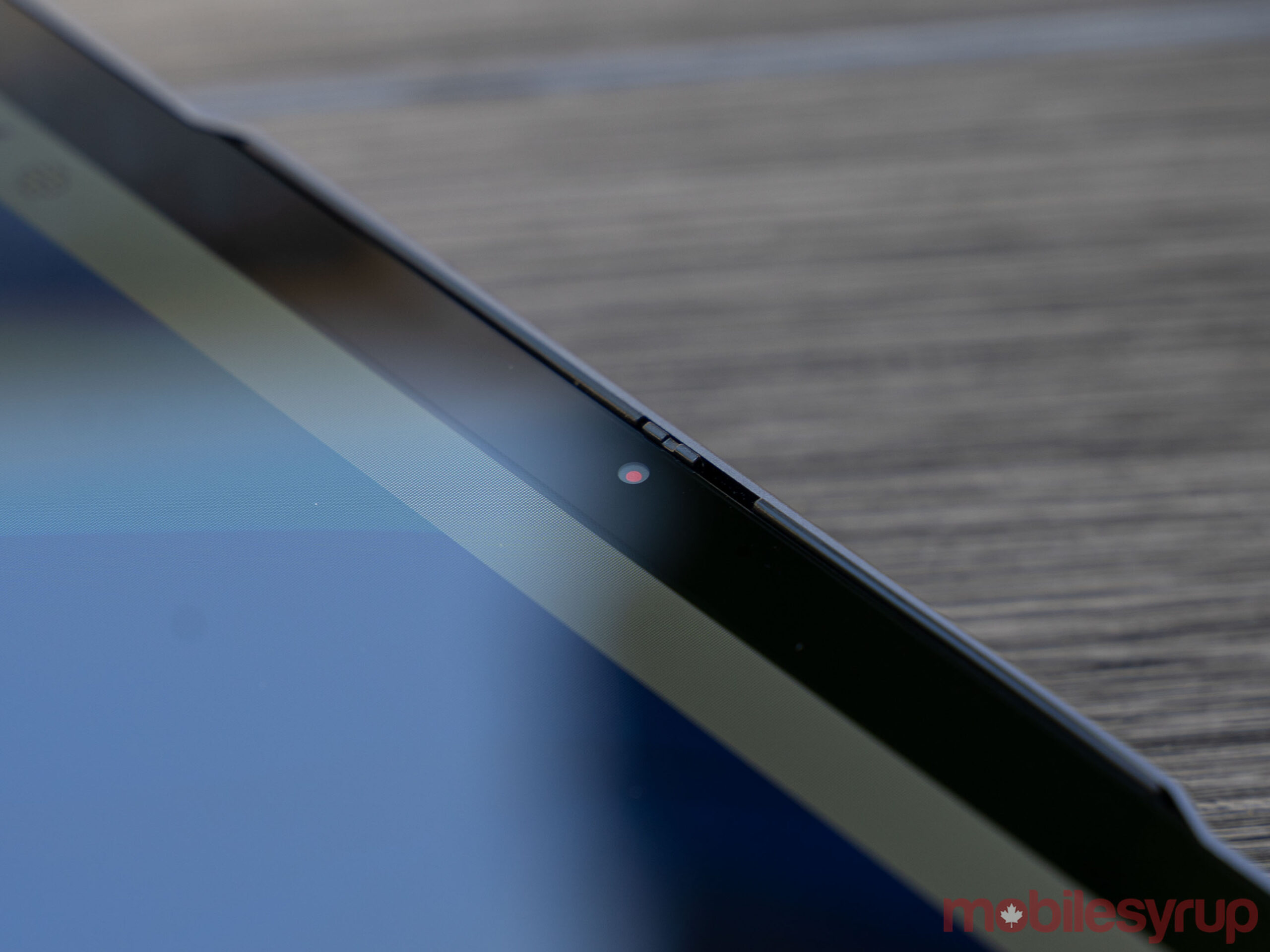 There are a few other small things the Yoga C940 does, some good, others bad. Although it took a moment to get used to, the side-mounted power button makes it easy to turn on the laptop no matter what configuration you have it in.

Plus, the built-in stylus slot makes it easy to keep a stylus with you on the go, something I’ve always found frustrating with Microsoft’s Surface Pen. To be fair, the Surface Pro X did fix that particular gripe.

Lenovo included a webcam shutter as well, always a welcome addition for blocking the camera without sticking a piece of tape over it.

The port situation is also fairly good. On the right side is one USB-A port. The left has the headphone jack, two Thunderbolt 3 ports and a proprietary charging port. While I never like proprietary ports, Lenovo’s is better than most because it’s reversible.

The Yoga features a fingerprint scanner too, which works quite well.

Pricey but worth considering

Overall, I quite liked the Lenovo Yoga C940. Aside from the size -- which for my taste, was just a bit too large -- the Yoga offers a unique 2-in-1 system that gives you all the benefits of a traditional clamshell laptop. I prefer Lenovo’s approach to Microsoft’s here, mostly because it trades off tablet usability for improved laptop performance.

The Surface Book 3, thanks to the detachable screen, works great as a tablet device when needed. Unfortunately, I think the engineering effort involved in making a removable screen feasible hurt the rest of the Book 3. Sure, the Yoga’s tablet form factor isn’t as light and thin as the Book 3, but it also doesn’t compromise in the same ways.

If you’re looking for a great all-round laptop that can handle most workloads, some light gaming and performs as a tablet-like entertainment device, the Lenovo Yoga is for you.

The main caveat comes down to price. In Canada, the C940 currently starts at $2,039.99 on Lenovo’s website. Considering the laptop sports some older hardware, it could be worth waiting for a refresh with a newer, more powerful chipset.

Still, the current config is well-equipped to handle most things people do with a laptop, so if having the latest and greatest tech inside isn’t super important, the Yoga is a great option.

"If you’re looking for a great all-round laptop that can handle most workloads, some light gaming and performs as a tablet-like entertainment device, the Lenovo Yoga is for you"