The Surface Book 3 is one of Microsoft’s most powerful offerings, but it could use a redesign 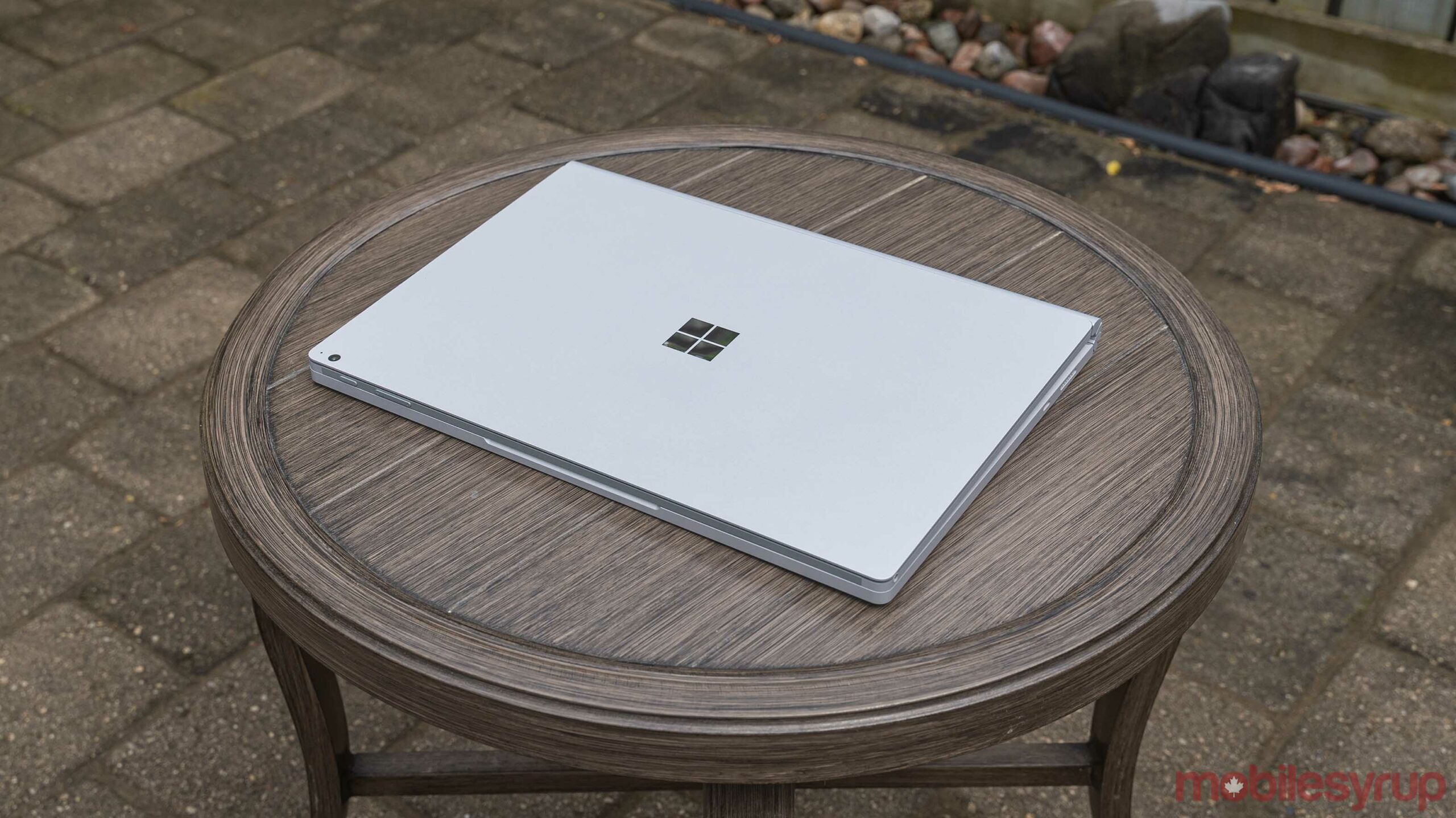 Microsoft’s venerable Surface Book is widely considered one of the company’s best laptops. It’s powerful, looks great and it boasts a unique design and removable screen that sets it apart from the competition.

The latest Surface Book 3 is no different. It sports the same look as past Surface Books with little difference beyond what’s on the inside.

Unfortunately, I think it’s time for the Surface Book to upgrade its design. Sure, there are some benefits to the unique form factor, but it also feels as if the design is holding back the Book 3 in important ways. 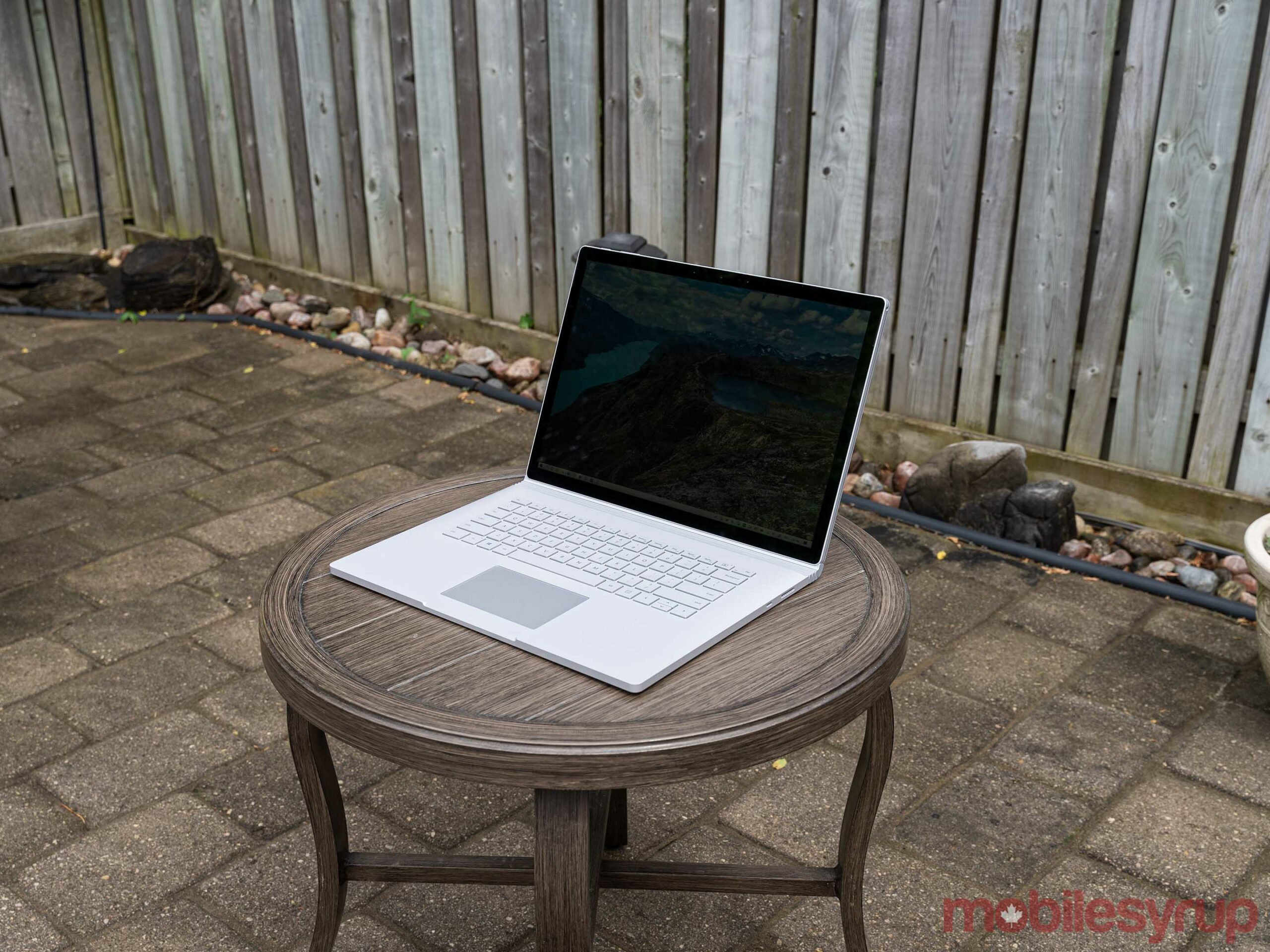 Fastest Book on the block

Coming off reviewing the Surface Go 2, the Book 3 feels incredibly snappy. As it should — this laptop can be kitted out with up to a 10th Gen Intel Core i7-1065G7 processor as well as up to Nvidia GTX 1660 Ti Max-Q graphics. If you’re looking to get the Book 3 for business, you can push even higher with up to Quadro RTX 3000 graphics.

The internals are just as impressive in use as they are on paper. Microsoft provided a 15-inch Surface Book 3 with the 10th Gen Intel Core i7, 512GB of storage, 32GB of RAM and the GTX 1660 Ti. I used it primarily for work while I had the review unit, which meant lots of web browsing often with more than seven tabs open, Photoshop, Slack and more running.

In that time, I seldom encountered any serious slowdowns. To be fair, even on my busiest days I likely wasn’t pushing the Surface Book 3 to its limits. This is a laptop that Microsoft is aiming directly at professionals, whether that means editing video or doing 3D rendering. 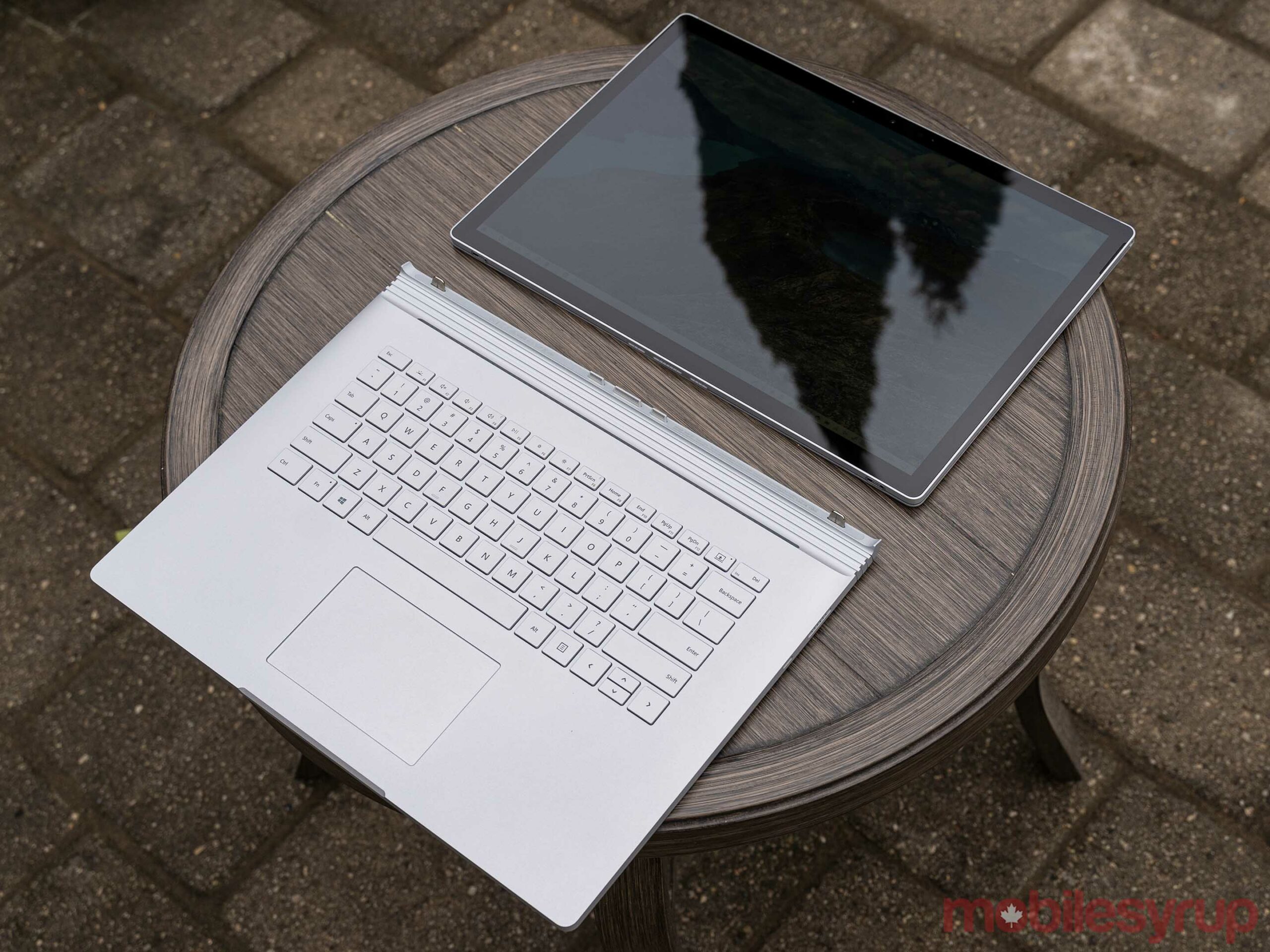 That said, considering the Book 3 maxes out at the quad-core i7-1065G7, some professionals will no doubt find the laptop lacking in some scenarios. The choice to go with the 1065G7 is due to the design, a Microsoft spokesperson explained in a product briefing. However, the company also noted that the higher power GPU should balance it out.

Still, it would have been nice to see a more powerful CPU option in the Book 3, especially considering its target userbase. The current i7 option is no slouch, however.

A little long in the hinge 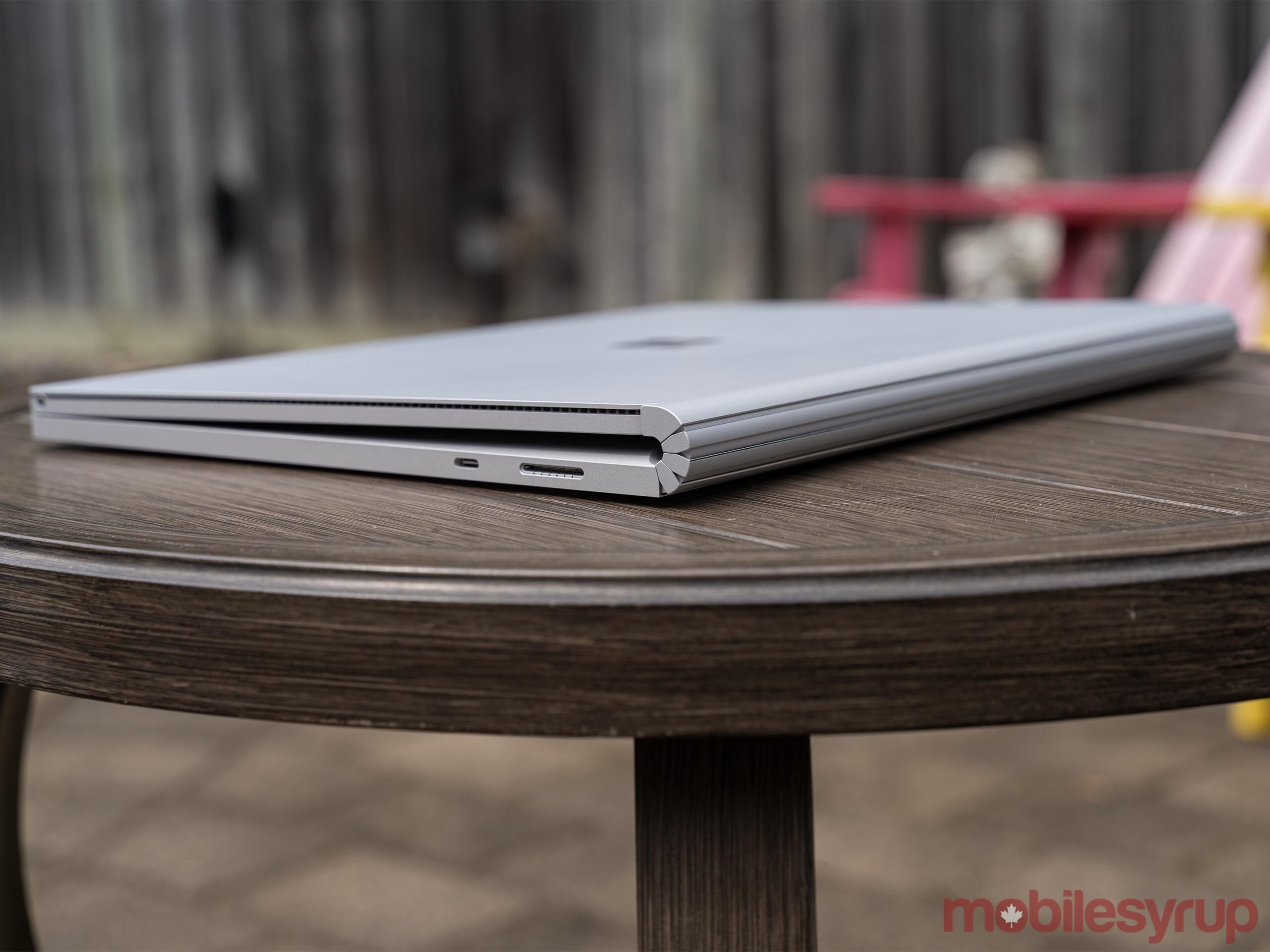 For those unfamiliar with the Surface Book line, it sports a unique accordion-like hinge and a detachable screen. This is primarily why the Book 3 was limited in terms of CPU, as the screen needs to have everything for the computer to run when you’ve detached it from the keyboard.

In other words, the RAM, CPU, SSD and several other components must be contained behind the display. The base houses the GPU and plenty of extra battery along with the keyboard and trackpad. It’s this design that has ultimately limited Microsoft, as the display needs a smaller and more efficient CPU that produces less heat to maintain the current thickness.

I must give Microsoft credit for not only making the design work, but managing to do so and still make a powerful laptop. However, I can’t help but feel that the design is holding back the Surface Book line.

Performance limitations aside, there are other flaws with the design. First and foremost is that because of the way the hinge operates, when you close the lid of the Book 3, you’re left with a significant gap between much of the screen and the keyboard deck. 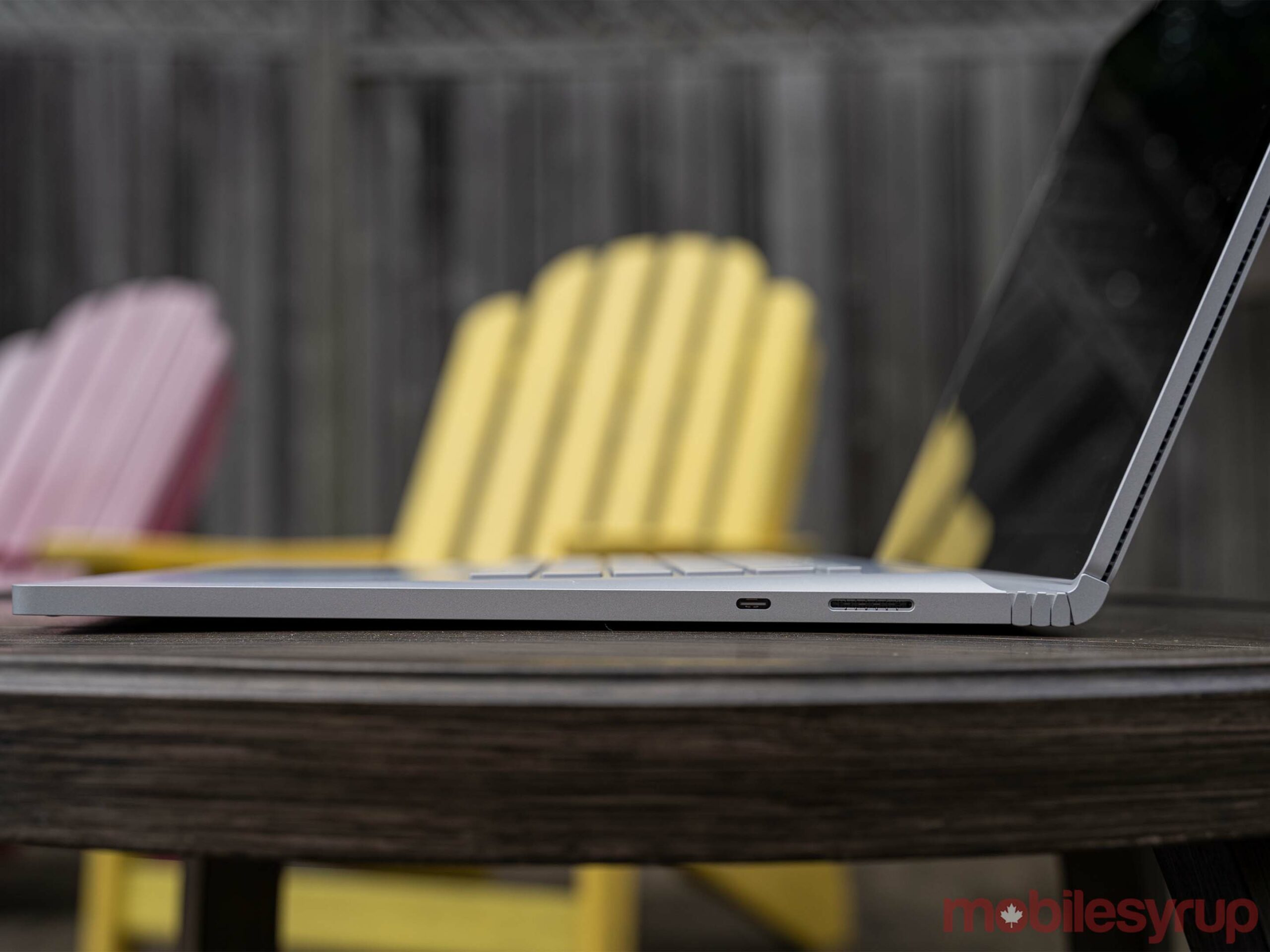 It’s both a blessing and a curse. The gap is just big enough that the screen and keyboard don’t touch, which means you won’t have to worry about the keys marking the display like what happens on other laptops, such as the MacBook Pro. However, the gap does leave space for debris to get between the palm rest and the display, which could lead to scratches.

In my time with the Book 3, I never encountered that particular issue, but I also didn’t do much travelling with the device thanks to the ongoing COVID-19 pandemic. Even if I was able to commute to the office, I still wouldn’t be comfortable doing so with the Book 3. Potential scratching aside, the gap when closed leaves me concerned that enough force could damage the display since there’s no support. Further, the Book 3 is a heavy machine at 4.2lbs (1,905g), compounding portability issues even more.

The smaller 13.5-inch model is lighter and easier to lug around, but it still suffers from the same display gap issue as the 15-inch.

On top of that, the hinge was quite creaky, making opening and closing the Surface Book 3 audibly uncomfortable.

Not everything about the hinge is bad 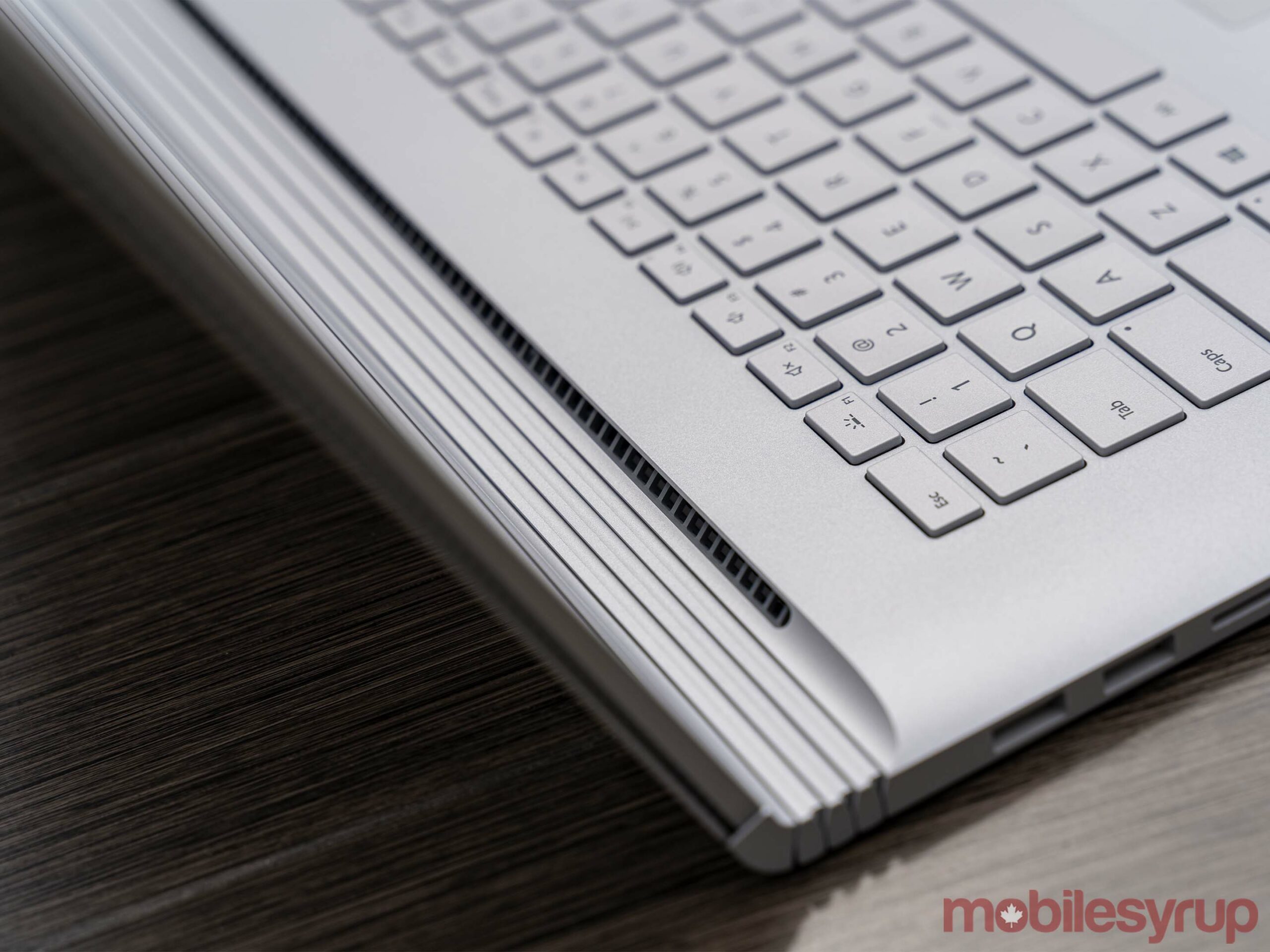 However, the odd hinge is not without benefit. One of the things I appreciate most about the Surface Book 3 is its unique placement of vents. The display sports a small gap that runs around the edge for venting heat from the CPU and other components.

Likewise, the base includes a unique, slanted surface that makes typing comfortable. At the top of the slant, right before the hinge, there’s another vent for cooling the GPU and components inside the bottom of the Book 3.

All this means there are no vents on the bottom of the Surface Book 3, which makes it great for use on your lap. Most laptops I’ve used vent through the bottom, which can make using it on your lap uncomfortable thanks to all the heat. Not to mention performance usually drops off during lap use since the computer is struggling to keep cold.

This isn’t the case with the Surface Book 3, which stays wonderfully cool during lap use.

3:2 is the best aspect ratio 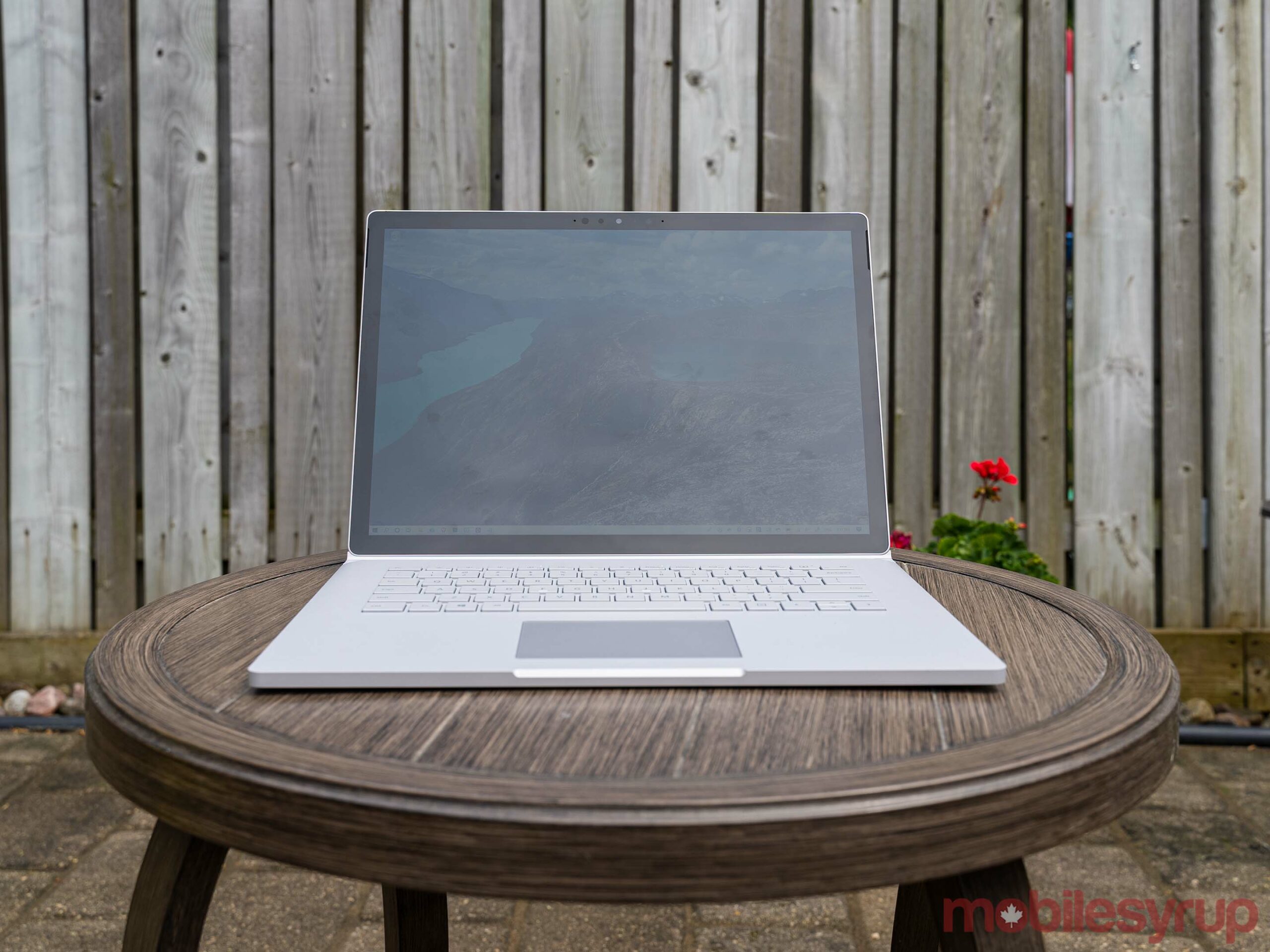 The Surface Book 3’s display is, like most Microsoft’s products, excellent. The 3:2 aspect ratio continues to be the best for laptops and allows for much more productivity. While I wasn’t partial to the size and heft of the 15-inch model, I did appreciate the extra space the screen gave me.

Colours are also accurate, although I found I had to recalibrate the review unit’s display. Out of the box, the colours seemed slightly off and for some odd reason, Photoshop colours were completely wrong. White was displayed as yellow and all the other colours were off as well. The weirdest part was this only seemed to affect Photoshop and the images I edited looked fine after I saved them.

I ran Windows’ built-in screen calibration tool and hardly changed any of the settings other than slightly tweaking the gamma. After that, everything looked and worked fine. 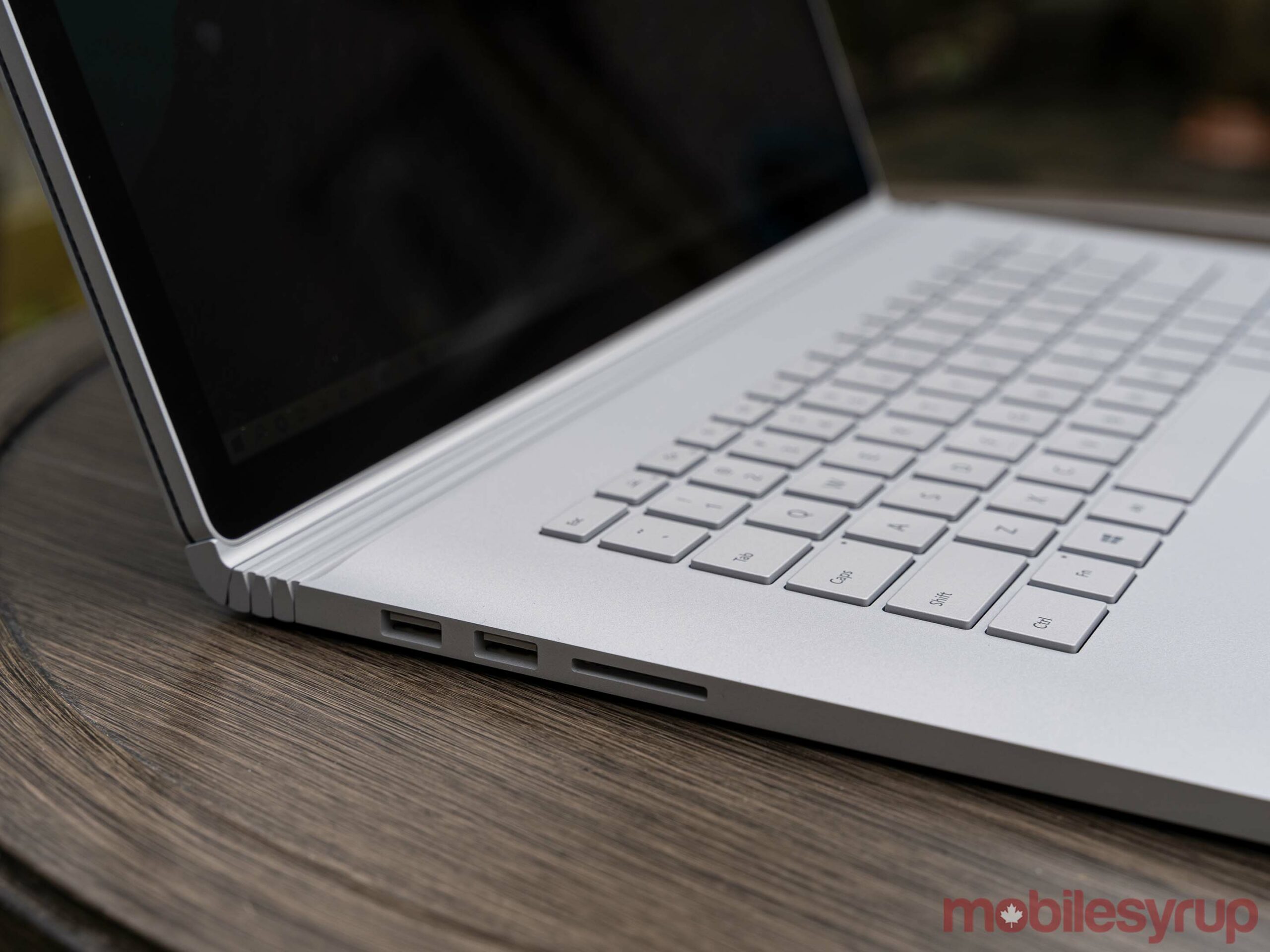 One of the concerns that became apparent about the Book 3 early on in my testing was that the laptop’s build quality wasn’t what I was expecting.

Overall, I would say that the Surface Book 3 still offers a very solid build, but there were a few areas of the experience that were lacking. The creaky hinge was one example, but that was far from the only one.

The keyboard — often lauded as one of the best in Windows laptops — was also squeaky. The worst offender was the Backspace key, which squeaked almost every time I pressed it. Some of the keys did as well, but it was rare enough that I’d forgive it if it weren’t for the Backspace key.

Another issue with the keyboard was it’s wildly uneven keyboard backlight brightness. Most noticeable at the lowest of the three brightness settings, some letters on the keyboard — for example, D, M, S, both Shift keys, U and a few others — all had uneven brightness. Often, they looked dimmer than the keys around them or even featured spottiness on the key itself. The issue isn’t as severe on the higher brightness levels. I also didn’t experience this on the Surface Laptop 3. 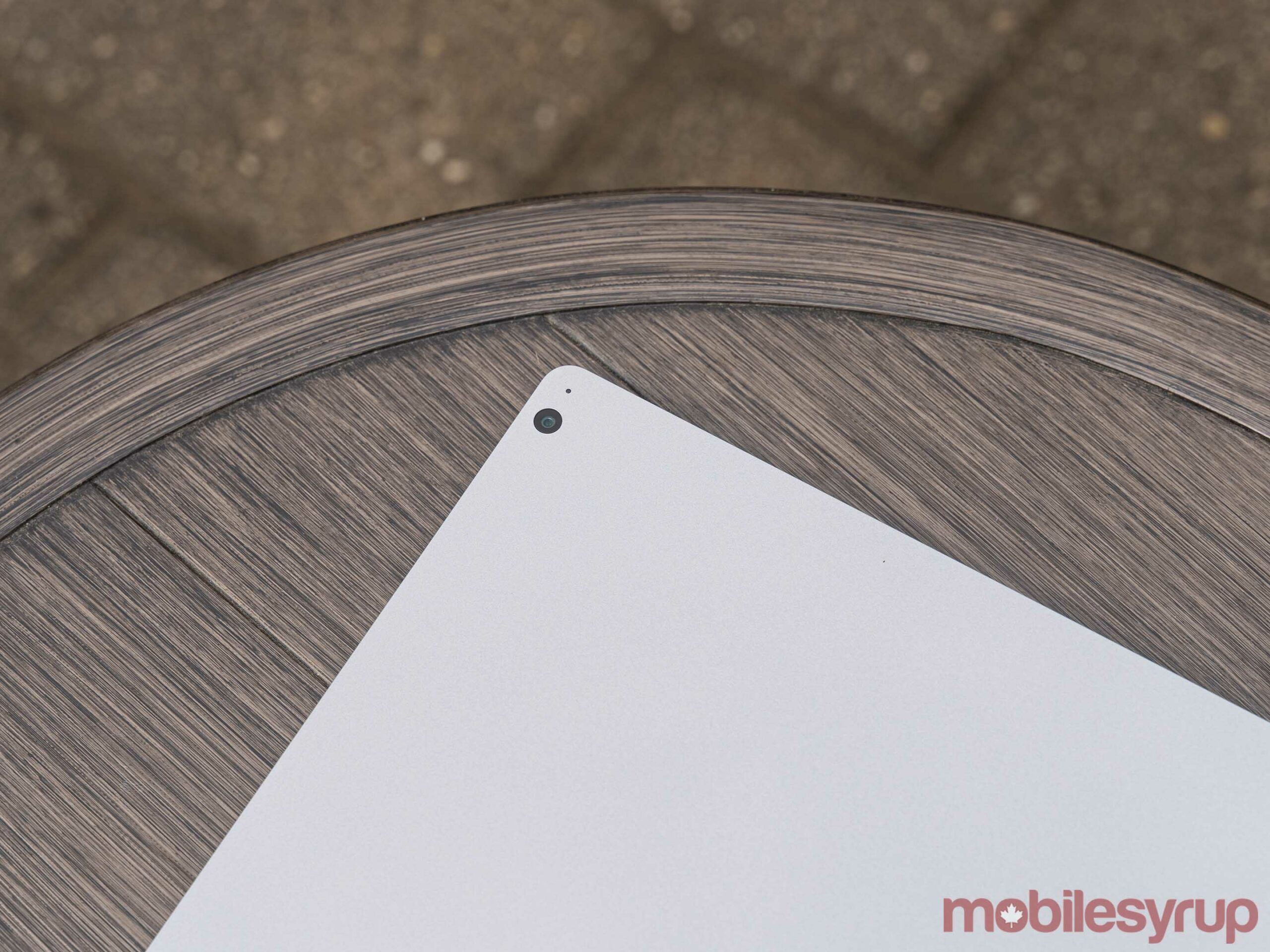 I found that the computer’s auto-brightness setting for the screen was incredibly sporadic as well. With the Book 3 sitting on my desk under consistent lighting, the screen brightness would jump around constantly.

Finally, there was a level of bugginess with the laptop that I wasn’t expecting. Once again, nothing deal-breaking here, but I expect better from Microsoft. Probably the most egregious was the trackpad would sometimes stop working for a few seconds. It’s a shame, considering it’s the best trackpad I’ve used on a Windows laptop. Battery life was all over the place as well, with the Book 3 making it almost all the way through my workday on one occasion and dying within a few hours of coming off the charger in another, despite running the same gamut of programs.

None of these things are in and of themselves dealbreakers, but I expect more from Microsoft and the Surface brand, especially at this price point.

The most powerful Surface, if you need it

Ultimately, Microsoft’s Surface Book 3 is a powerful option for anyone who needs to do heavy professional work while on the go. It’s also arguably one of the most versatile laptops available thanks to its detachable display. If you’re drawing, inking or doing other digital art, that will likely be invaluable to you. Outside of those use cases, I never found a need to take the screen off.

Along with power, you get an excellent keyboard and trackpad combo -- one of the best yet from Microsoft, small nitpicks aside.

Is the Surface Book 3 perfect? No, far from it. Bugs can be resolved and I hope that some of the quality quirks can also be ironed out. However, I think the Surface Book 4 needs a fundamental restructuring. To me, the Surface Book would benefit on the performance side by moving away from the detachable display -- perhaps the hinge could be reworked to bend all the way around so people can still have a tablet-like interface as well.

If you need the power on offer with the Surface Book 3 as well as the detachable display, this is an excellent option and you’ll find the Book 3 will serve you well. However, if you only need one or the other, there are better options out there. For example, if you like the detachable display but don’t need the power, Microsoft’s Surface Pro 7 or Go 2 will both serve a similar purpose without breaking the bank.

Likewise, if you need the power but not the detachable screen, you can likely find similar internals in traditional form factor laptops for around the same or a little less money.

"If you need the power and detachable display, the Surface Book 3 is an excellent option"