One thing is clear about Samsung’s 2020 smartphone lineup: the tech giant wants the Galaxy S20, the S20+ and S20 Ultra to be photography powerhouses.

While Samsung’s S Series has always featured a great camera, it’s arguably fallen behind its competitors in the space in recent years, notably Apple and Google. 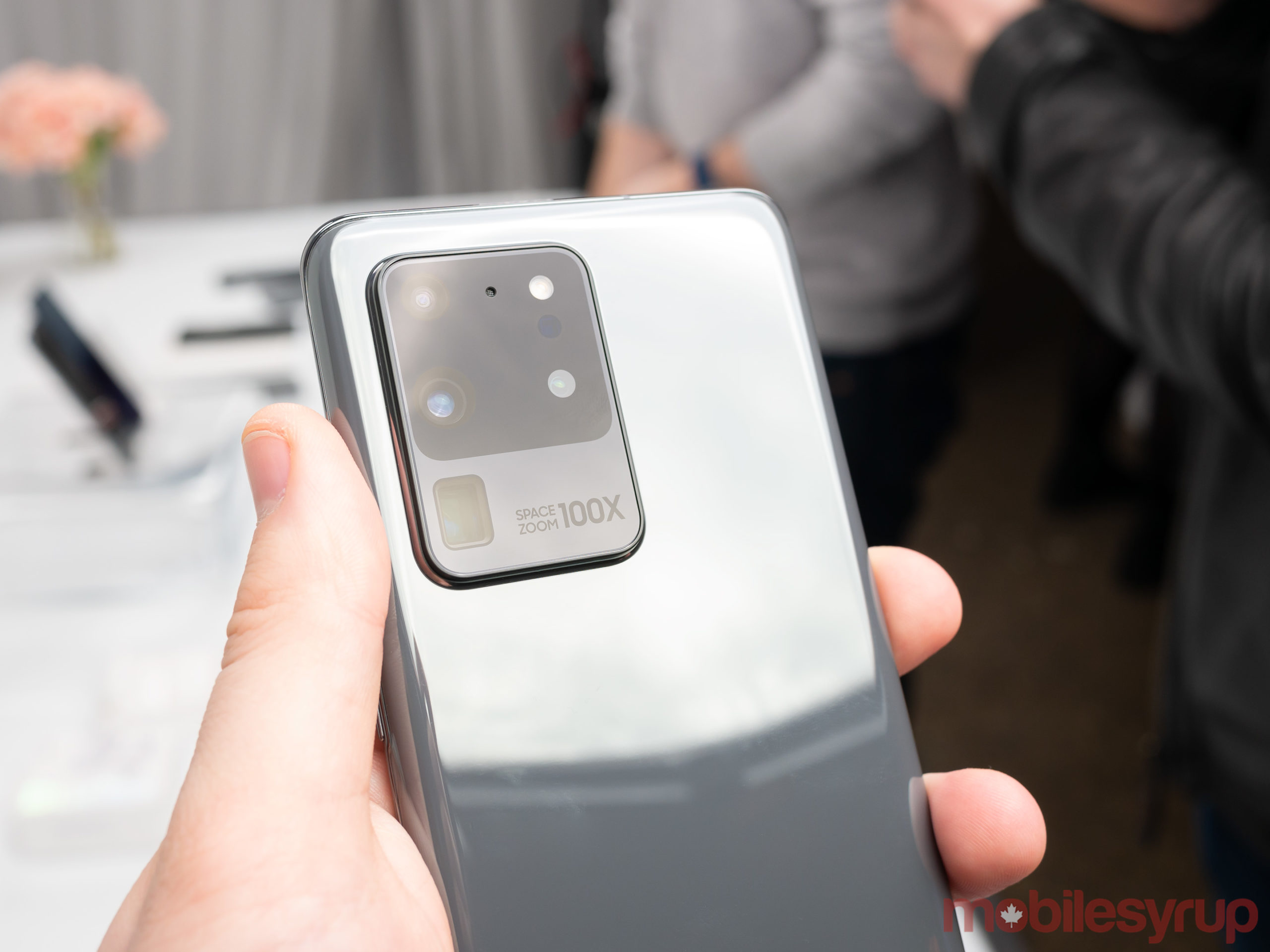 While all three phones are very similar, they also include several notable differences. 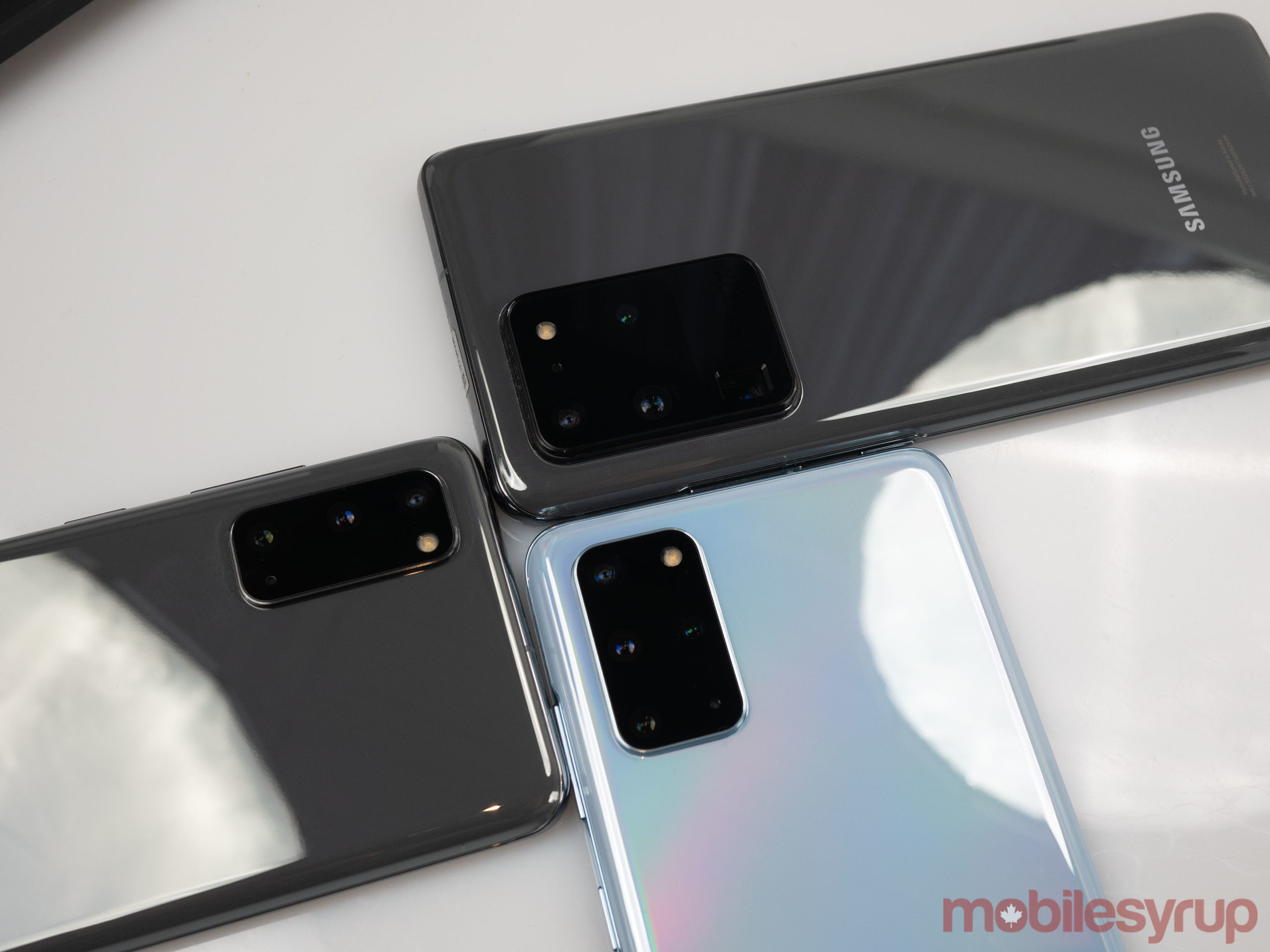 For example, The Galaxy S20 Ultra features a massive 48-megapixel (telephoto) ‘Space Zoom’ lens allowing for up to 100x digital zoom. I spent a very brief amount of time playing with Space Zoom and found that while it’s undeniably impressive a smartphone is capable of this level of magnification, 100x photos were blurry, grainy and generally didn’t look that great.

Similar to the Huawei P30 Pro’s 50x zoom, it’s likely there’s a sweet spot where the image is magnified, but that the quality still hits an acceptable level. There’s also interesting technology going on in the background where the pixels in the Space Zoom lens sensor get smaller and larger depending on lighting conditions. 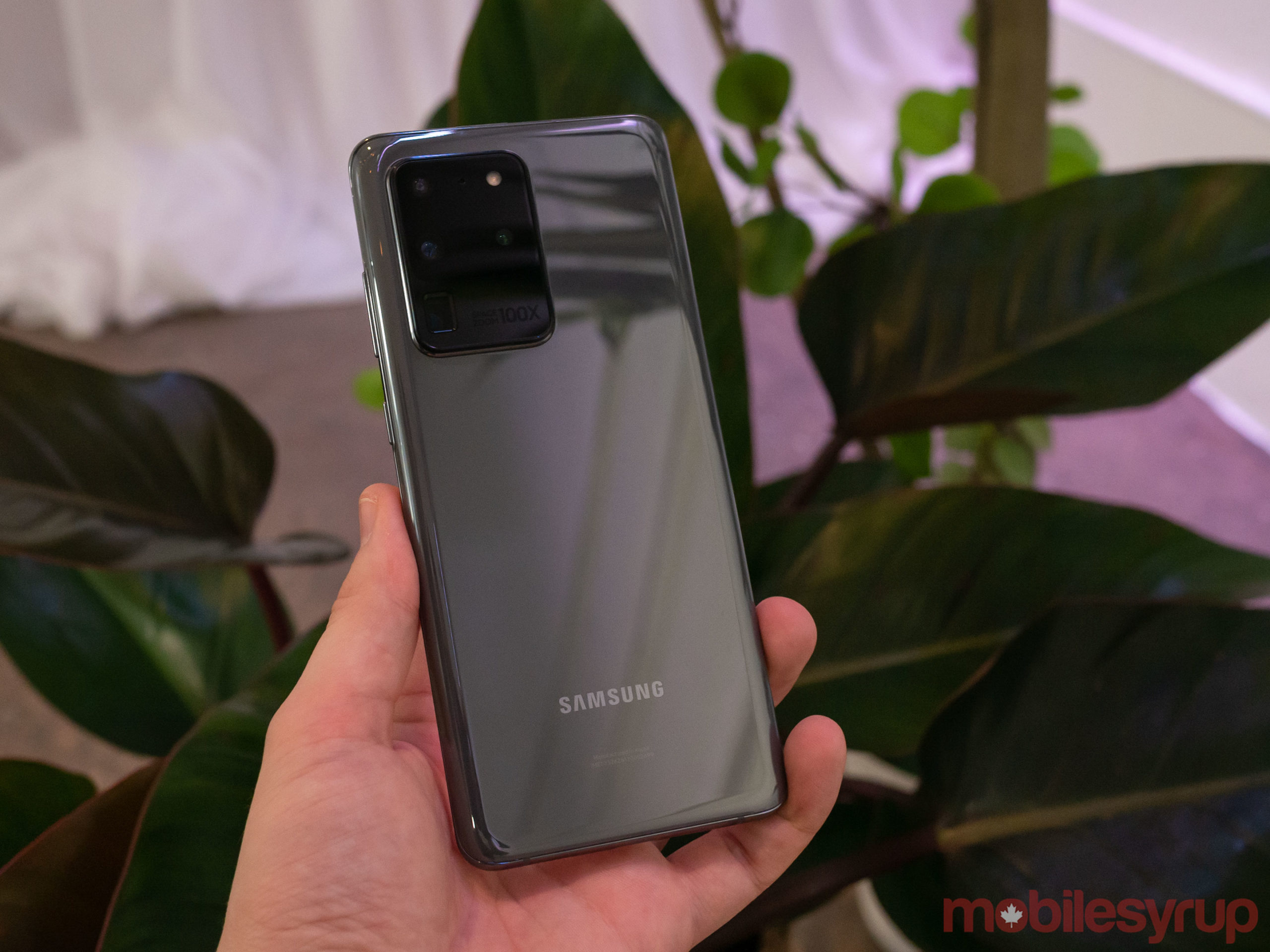 Rounding out the Ultra’s lenses is a 108-megapixel wide-angle, a 12-megapixel ultra-wide shooter and a time-of-flight sensor. The phone’s selfie shooter has also been increased to 40-megapixels, compared to 10-megapixels in the S20 and S20+. Though I didn’t spend much time testing out the selfie shooter, it’s nice to see a smartphone manufacturer placing an emphasis on a smartphone’s front-facing camera.

Speaking of the latter two devices, the S20 and S20+ feature a 12-megapixel wide shooter, a 64-megapixel telephoto camera and a 12-megapixel ultrawide camera. That said, out of these two only the S20+ includes a 3D-sensing time-of-flight sensor. 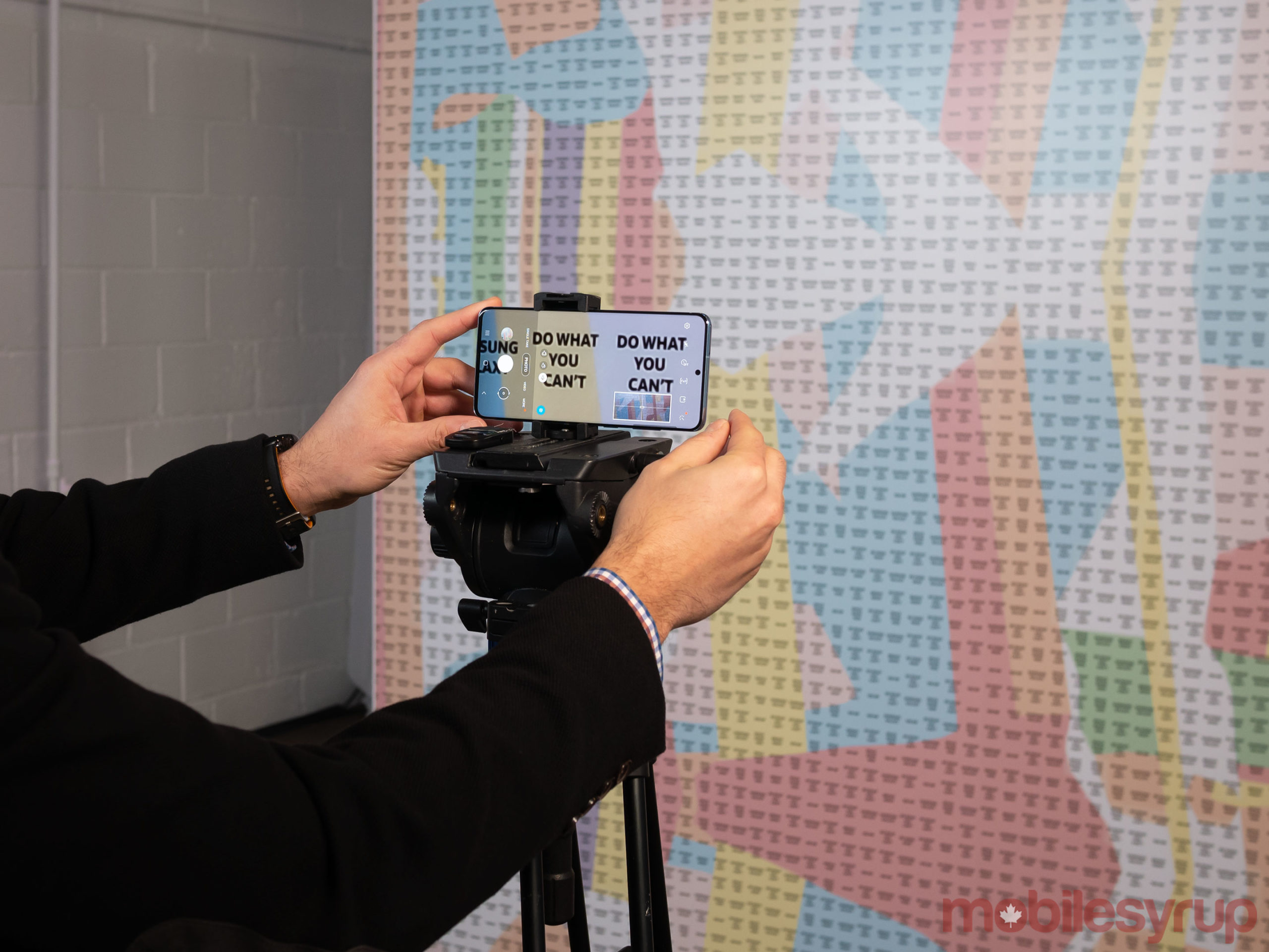 Sticking with this year’s focus on photography and video, all Galaxy S20 series phones can now shoot 8K video, have improved ‘Super Steady’ stabilization and feature a Pro video shooting mode that includes manual controls similar to a DSLR.

There’s also a notable new camera software feature this time around. ‘Single Take Mode’ automatically captures several photos and videos that you can then pick from later. This feature could be handy for anyone looking to streamline how they create photos and videos from family events. It’s unclear if this feature will eventually make its way to other Samsung smartphones, but for now, it’s exclusive to the S20 series. 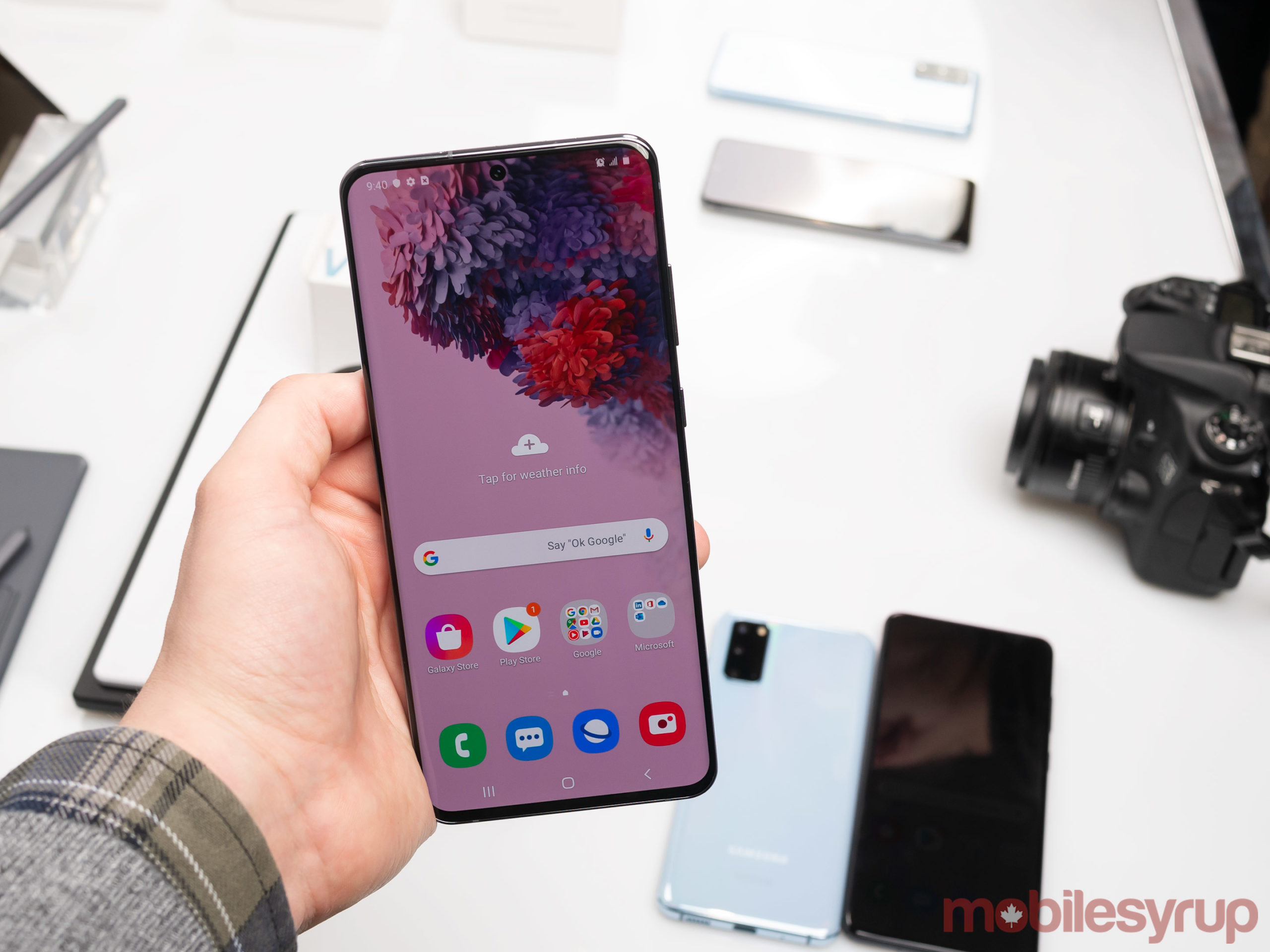 For me, the main question surrounding the S20 series’ photography capabilities is how Samsung is handling image processing. Do they still look over-processed and saturated, or has Samsung shifted the way its lenses deal with images on the post-processing side of things? It’s also unclear if low-light performance has been improved over last year’s S10, which struggled under darker conditions.

I haven’t spent enough time with the Galaxy S20 yet to know if this has actually changed. 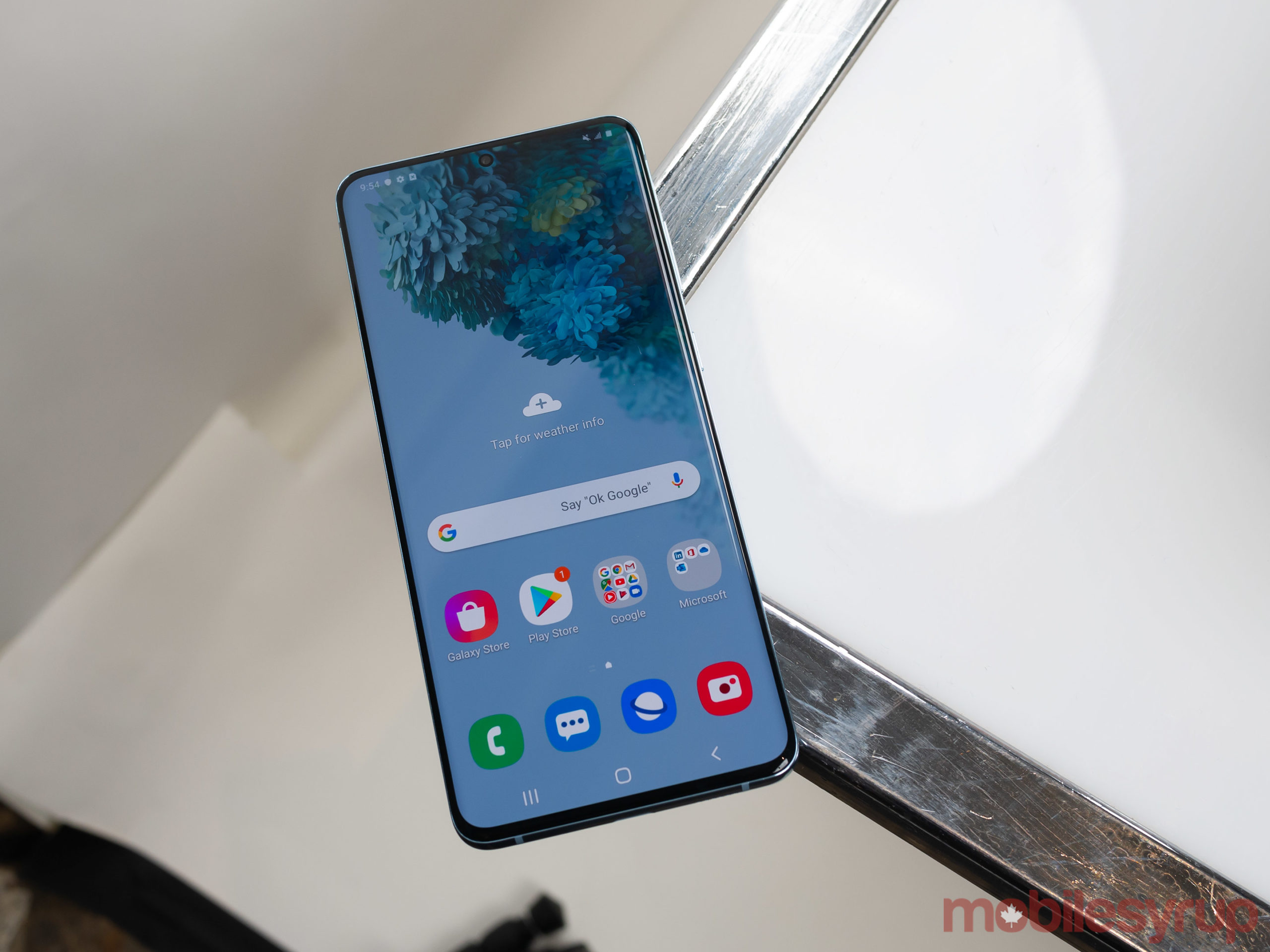 Beyond photography, there are other worthwhile new features this year with the S20, including a 120Hz dynamic AMOLED display that features 240Hz touch sensor technology. Similar to other phones that feature high display refresh rates like Asus’ ROG Phone II, the S20’s screen looks buttery smooth and feels incredibly responsive.

120Hz displays are the type of technology that might be difficult to notice at first, but once you do, it’s challenging to go back to a smartphone that doesn’t feature a high refresh rate. 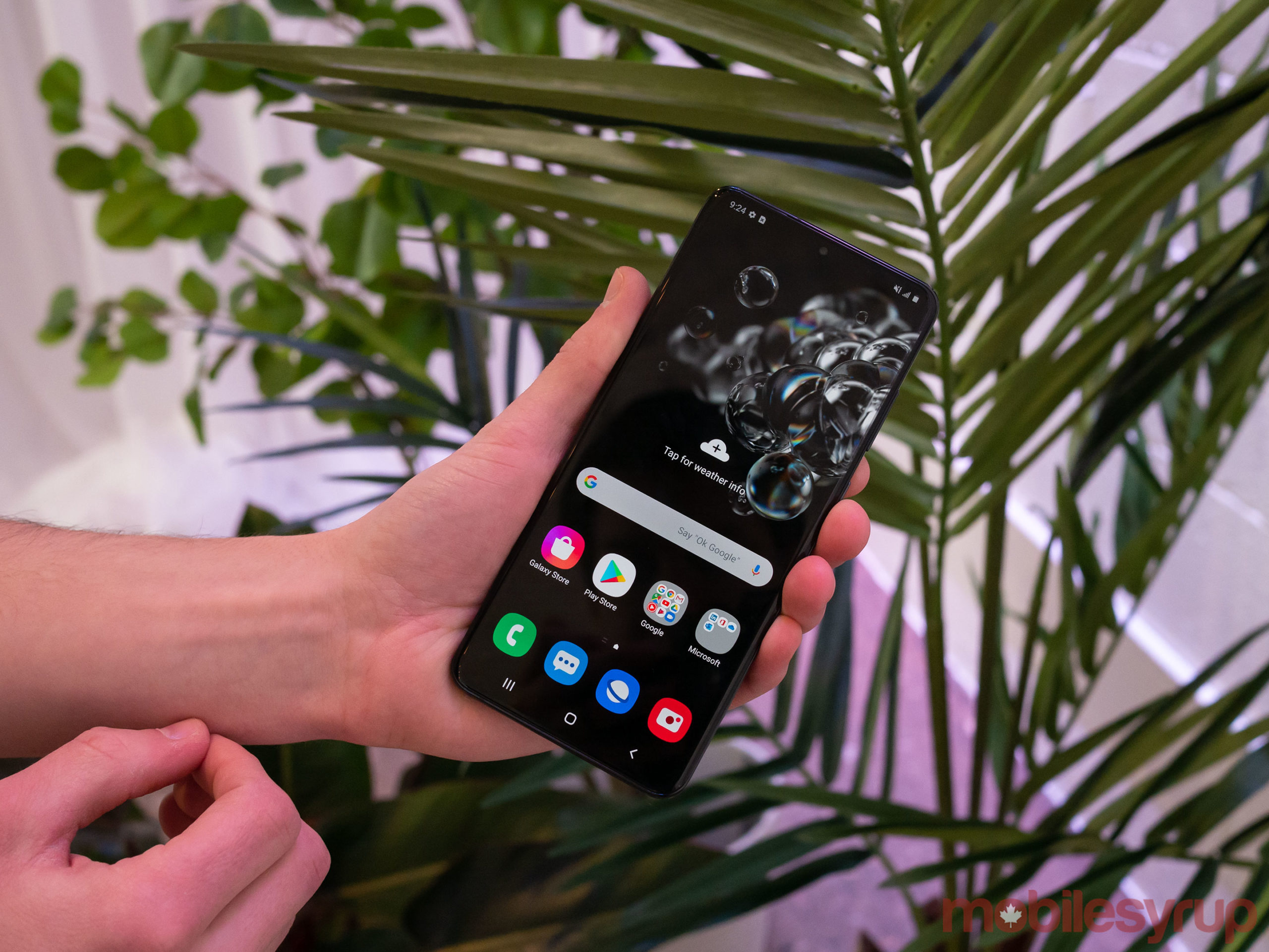 In the context of Canada, it’s important to note the S20, S20+ and S20 Ultra will be the first 5G-enabled smartphones available in the country. To be clear, this is just future-proofing right now since no Canadian carrier’s 5G network is publically available yet.

Given the spectrum required for 5G use hasn’t even been auctioned by the government, it’s unlikely that the next-generation wireless technology will even be available before 2021. 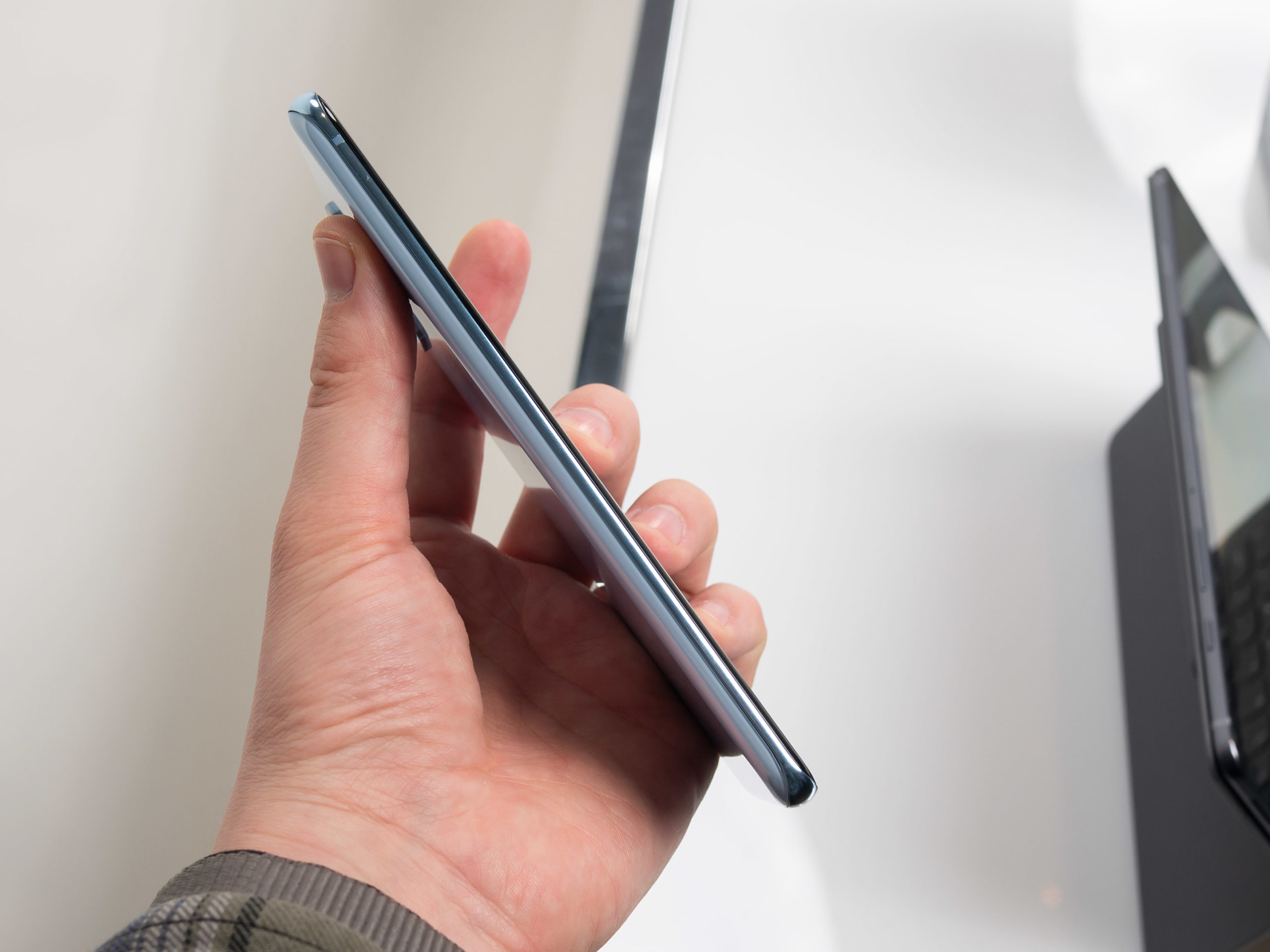 Other specs include a microSD card slot, HDR 10+ support, the return of the ultrasonic in-display fingerprint sensor and Qualcomm’s Snapdragon 865 processor, the hardware company’s latest processor. Regarding RAM, the Ultra features either 128GB or 512GB of internal storage, coupled with 12GB of RAM.

With the S20, the now-familiar look of the Galaxy S series has also gone largely unchanged, though there are a few notable differences this time around.

For instance, the front-facing hole-punch camera has shifted to the centre-top of the display, and there’s also now a sizable, instantly recognizable camera bump on its rear. The Ultra has the biggest bump thanks to its extra ‘Space Zoom’ lens, but all three camera bumps share the same design language.

The edges of the phone still feature curved glass coupled with sleek looking stainless steel and overall, it’s still a very premium, high-quality looking smartphone. Regarding colours, ‘Cloud Blue’ is by far this year’s most attractive option, followed by the new ‘Cosmic Gray’ colour. ‘Cosmic Black’ looks fine, but in an industry increasingly full of bright, inviting looking smartphones, the dark colour comes off as stark. 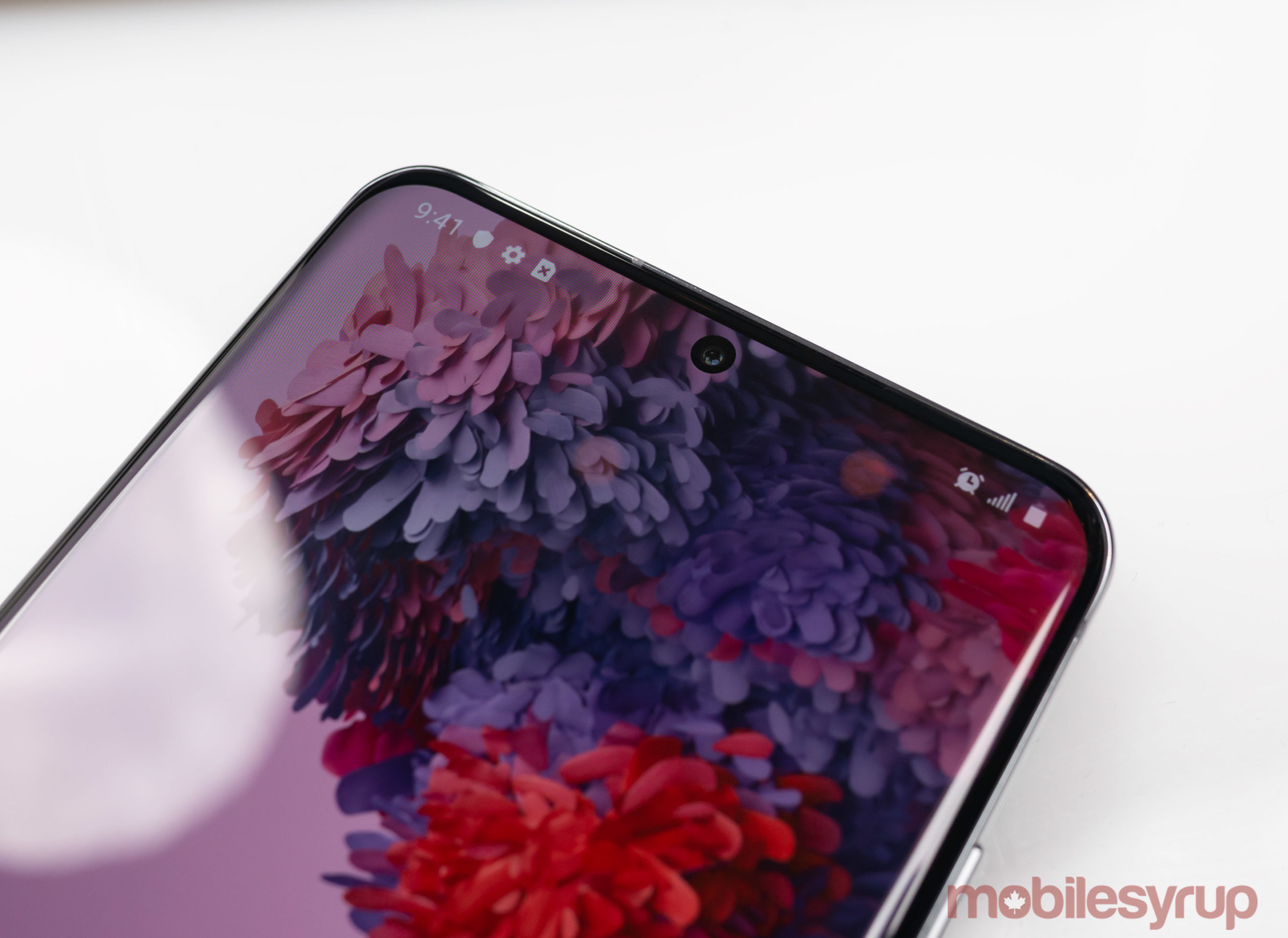 I don’t hate the S20 series’ camera bump, and in some ways, it’s reminiscent of a higher-quality version of the Pixel 4’s rear camera array. That said, it will likely go down as being one of the S20’s most divisive design choices.

It’s also worth noting that the 3.5mm headphone jack is gone, which means all those jokes Samsung made a few years ago about other manufacturers — particularly Apple — ditching the port definitely haven’t aged well. Samsung, as expected, now includes USB-C headphones in the box.

There’s a lot to still test out with the S20 series, but so far, I’m impressed with the new features Samsung has to offer this year, particularly the camera upgrades. I am a little concerned that the S20 Ultra is a little too large given that during my brief time with the phone at the hands-on event it already felt unwieldy.

The Galaxy S20 series is set to be available for pre-order on February 11th. Pre-orders before March 5th get you a free pair of Galaxy Buds+ wireless earbuds. 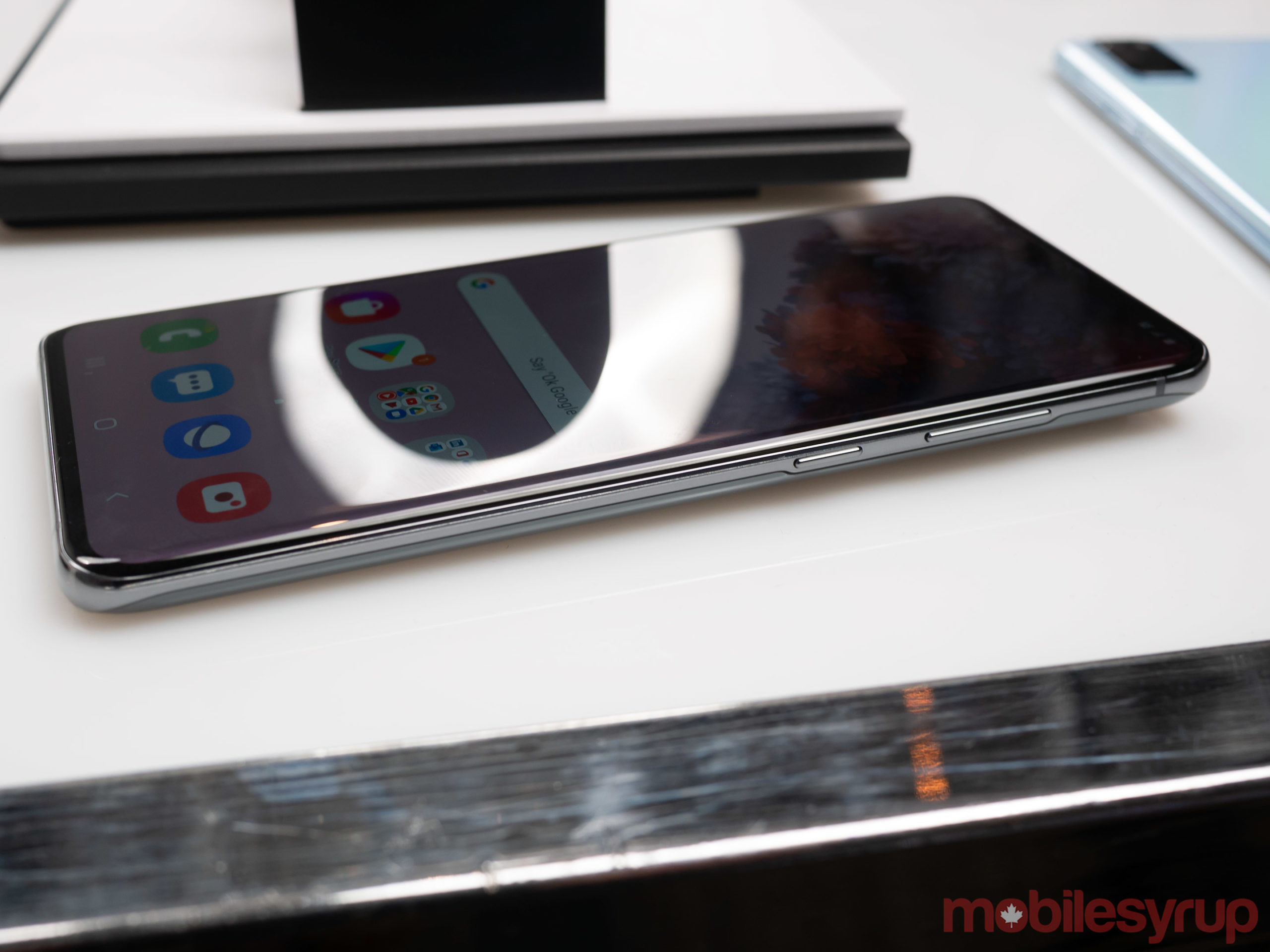