The tech giant's second Chromebook is an impressive effort 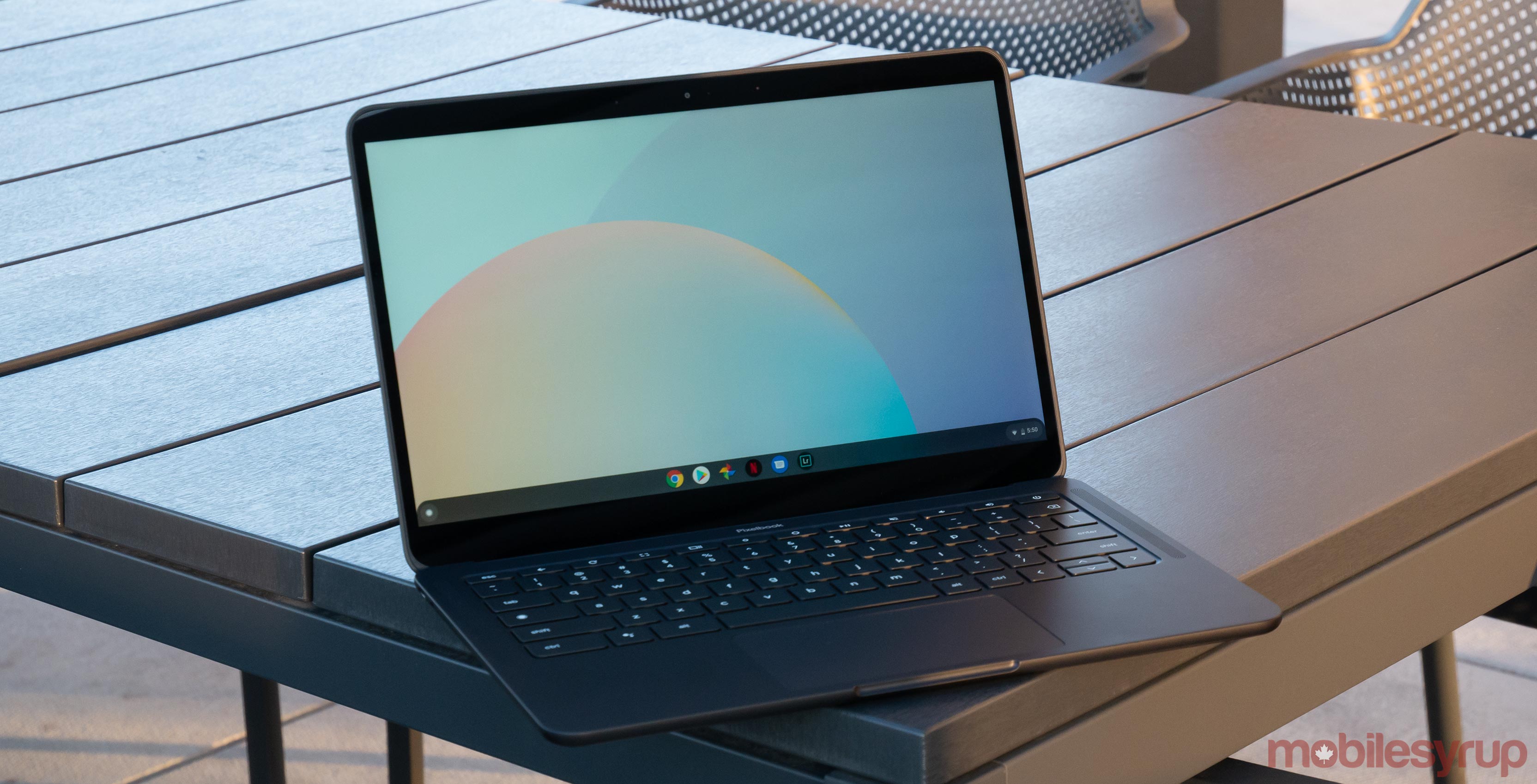 Google’s Pixelbook Go is one of the best Chromebooks available right now.

Its understated design is stunning and features impressive build quality despite being positioned by Google as an “entry-level” device. In every sense of the phrase, Google’s Pixelbook Go feels decidedly high-end. I’d even go so far as to say the Pixelbook Go has made me forget about last year’s disappointing Pixel Slate tablet. 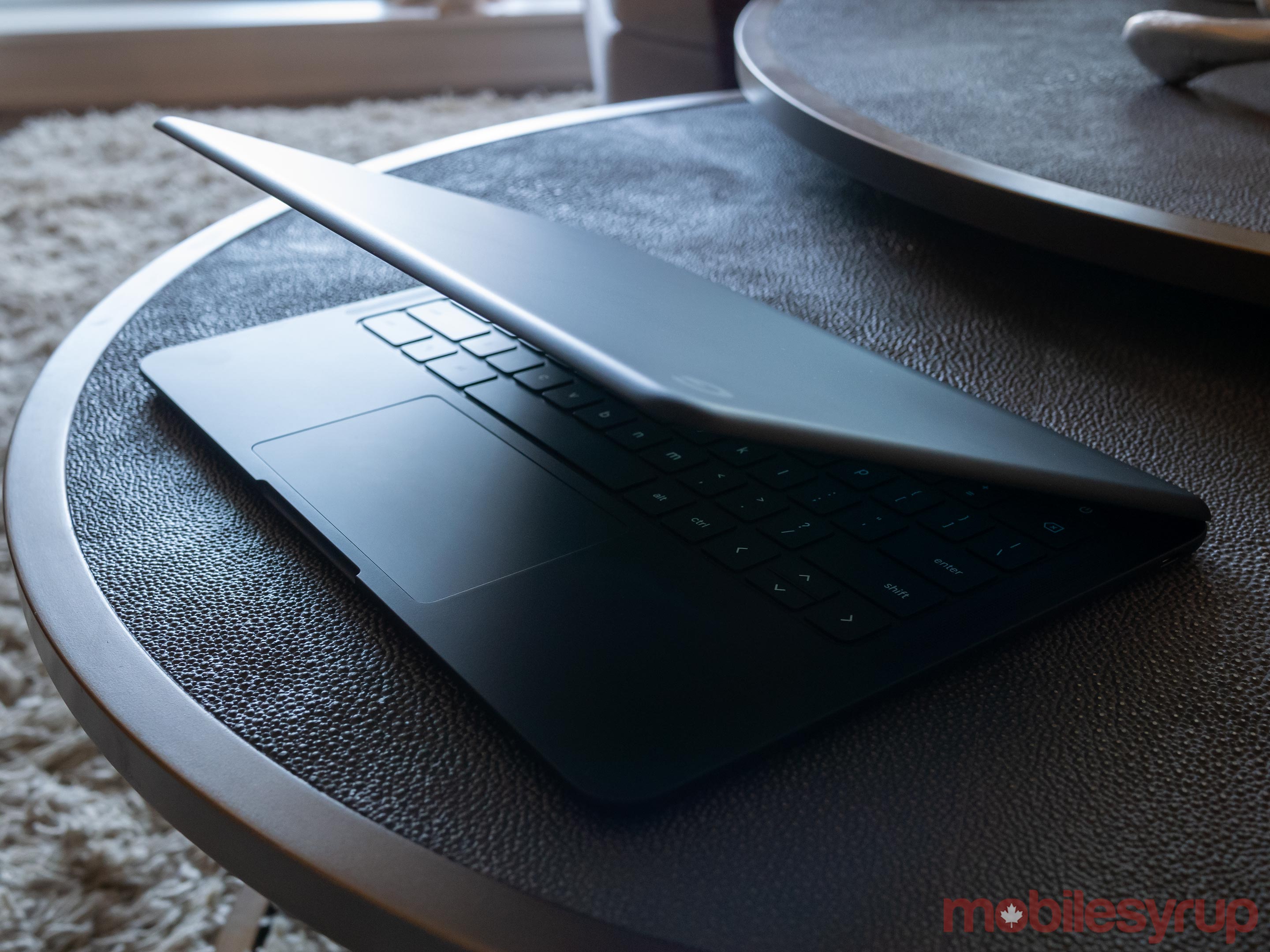 This brings me to my main issue with Google’s latest Chromebook offering beyond Chrome OS’ limitations that mostly stem from it being relatively new.

While the laptop is undeniably impressive and a little cheaper than the original Pixelbook, it’s still pricey in Canada when compared to other similar Chromebooks from third-party manufacturers like Asus and HP. 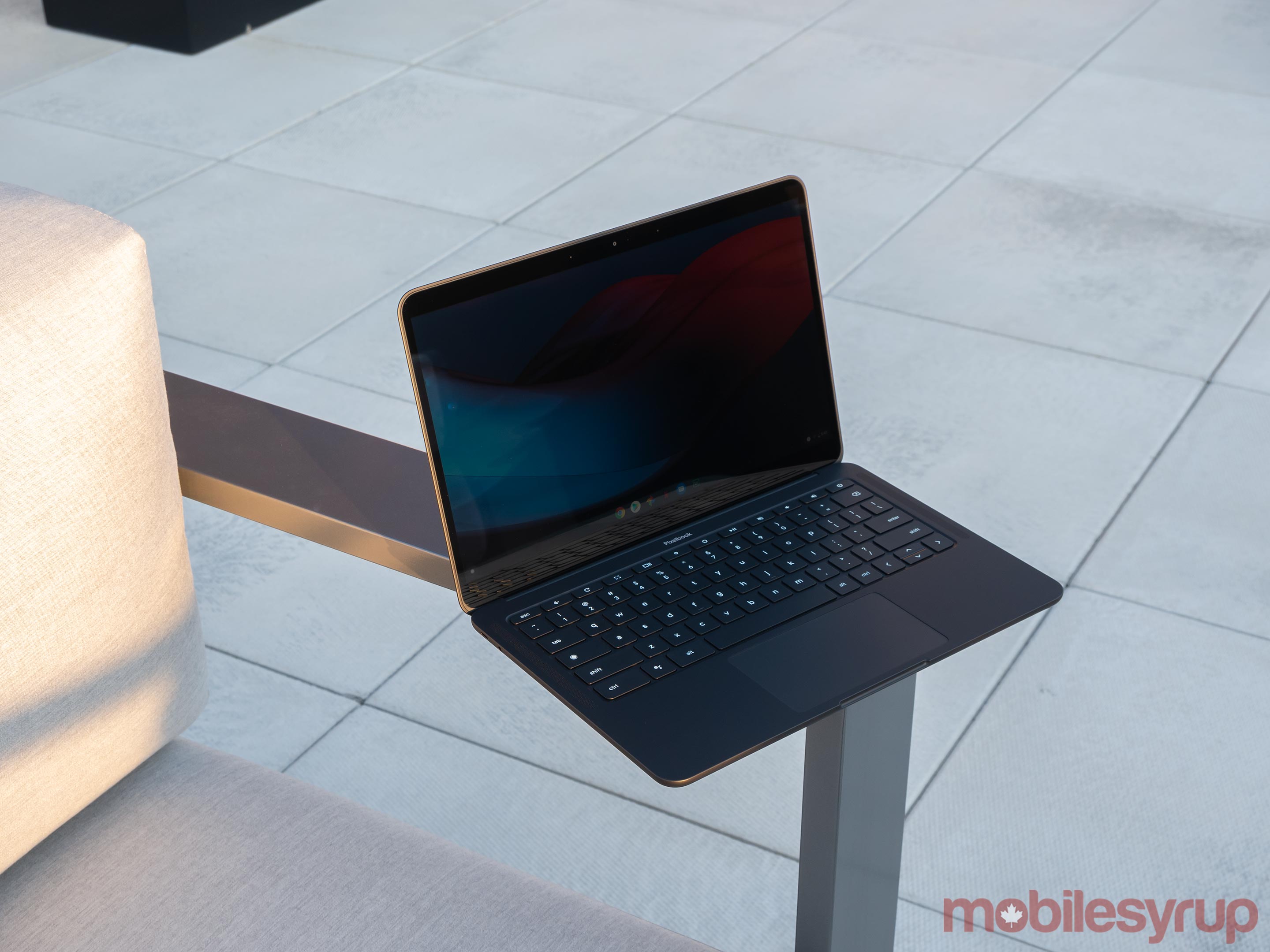 The Chrome OS-powered Pixelbook Go is not the true successor to Google’s previous Chromebook. Unlike 2017’s Pixelbook, which was capable of transforming into a tablet thanks to its innovative 360-degree hinge, the Go adopts the form of a traditional laptop.

The Pixelbook Go’s 13.3-inch, 16:9 aspect ratio, 1920 x 1080 pixel resolution screen opens and closes smoothly. Its hinge is even weighted in a way that allows it to easily open and close with one hand. While the display is 1080p, there’s also a 4K version of the laptop measuring in at a 3840 x 2160 pixel resolution, though it’s unclear why anyone would ever need a 4K Chromebook. The screen itself features accurate colour and is overall vibrant, though its LCD panel doesn’t stand out in any particular way. 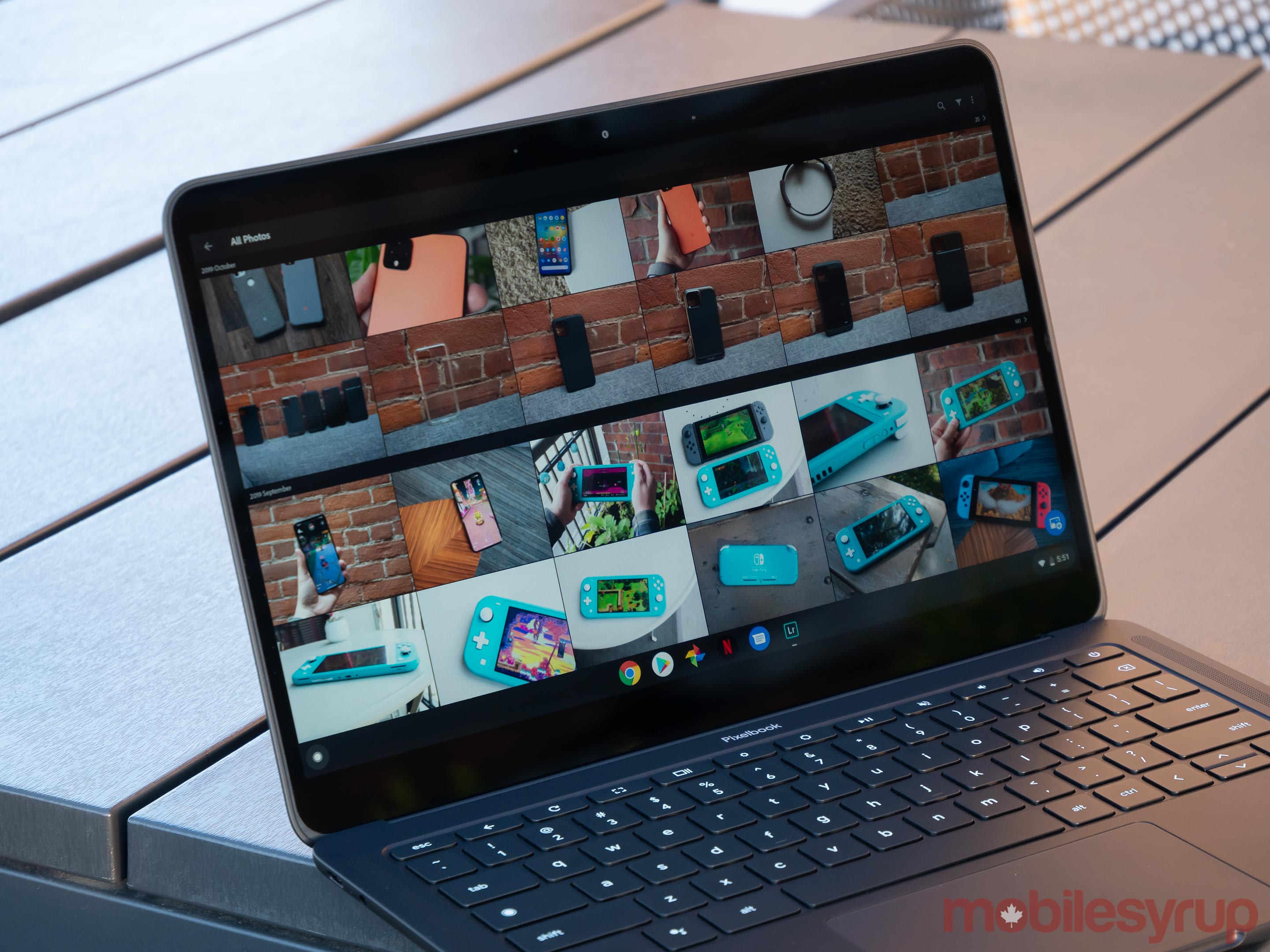 The Go ditches the 3:2 aspect ratio of the original Pixelbook for a far wider 16:9 aspect ratio, making the laptop better for watching video but arguably less ideal for tasks like writing or working on a spreadsheet. The screen also has thin bezels when compared to the original Pixelbook, which features dated-looking substantial edges running around the circumference of its display.

That said, the Pixelbook Go does include one of the Pixelbook’s best features. The excellent keyboard from Google’s first Chromebook is back, and it’s even quieter this time. 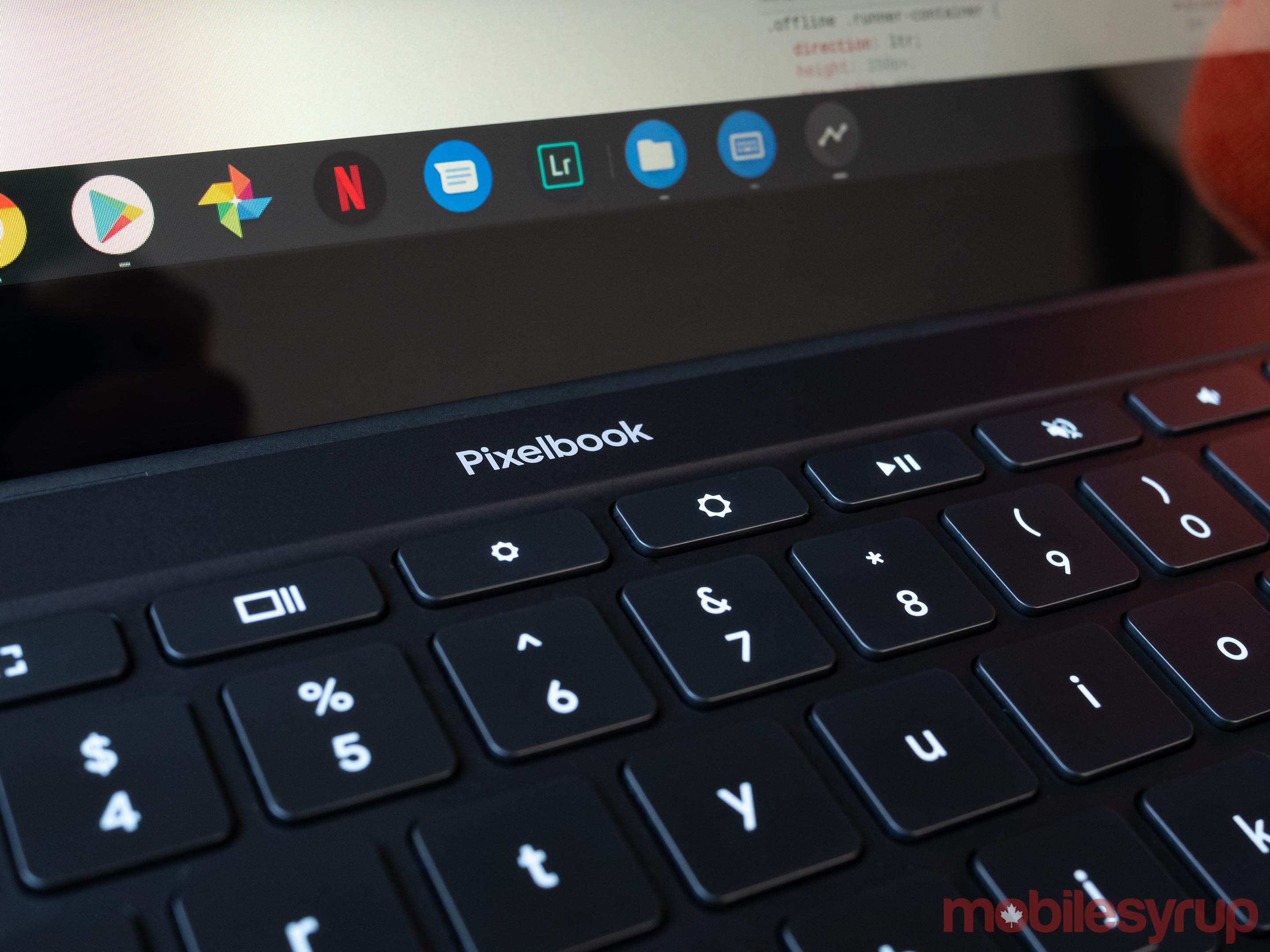 In short, the Pixelbook Go is a joy to type on and way ahead of any laptop I’ve ever used over the last few years. The keys feature just enough travel to feel satisfying and always remain responsive.

The laptop features a ‘Just Black’ painted magnesium finish, which Google says it opted for to keep the price down. There’s also a ‘Not Pink’ variant on the way, but it’s currently listed as “coming soon” on Google’s website. Even with these cost-saving measures, the Go still looks sleek and feels like a high-quality device, despite ditching the Pixelbook’s more premium finish and design. However, there’s nothing in particular that makes its aesthetic immediately stand out from other laptops. 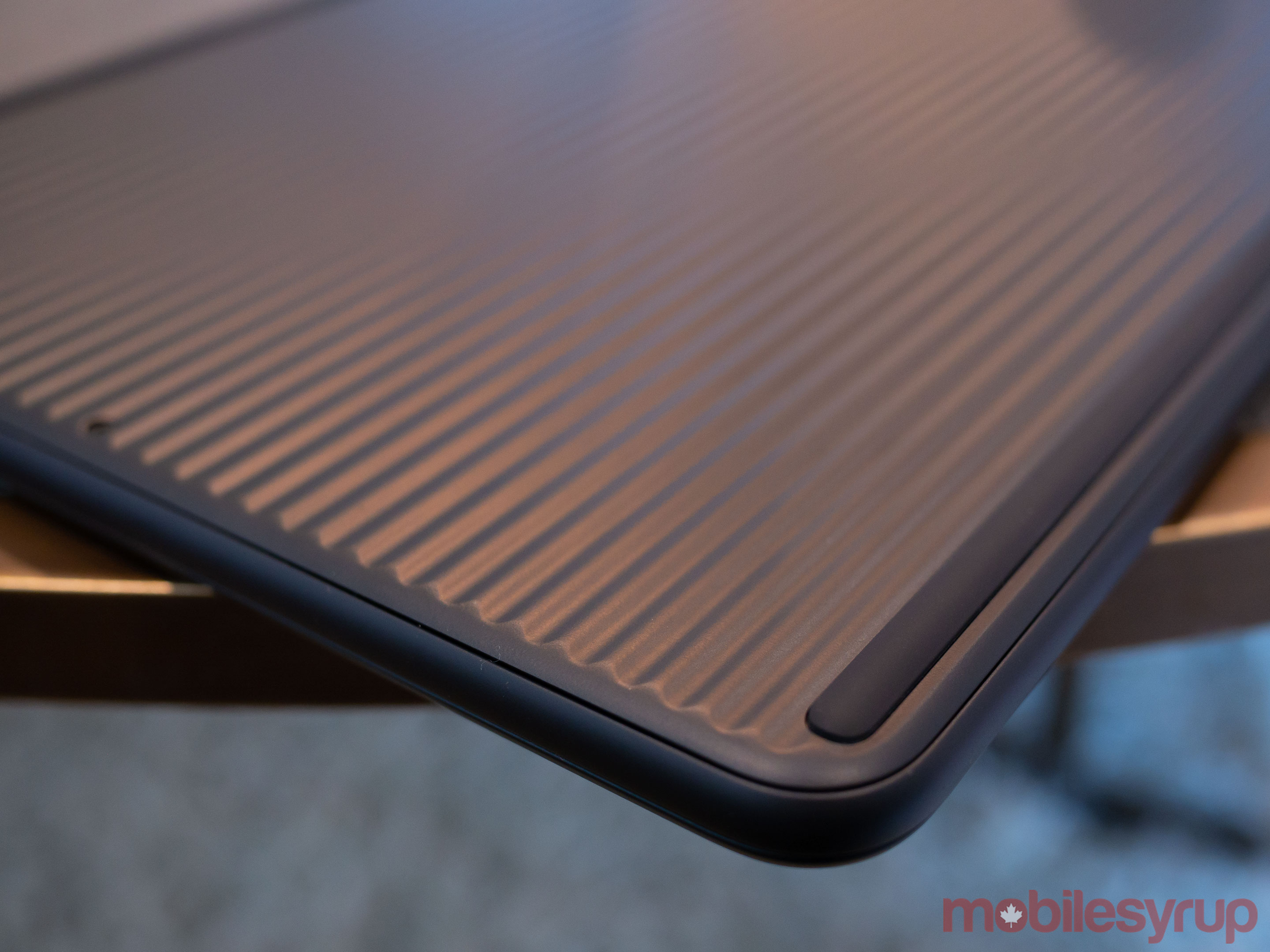 The only noticeable design feature is the Pixelbook Go’s ribbed bottom. While strange-looking and a little offputting, the ridges add grip to the laptop’s base, making it more difficult to slide out of your hand. I’m not particularly fond of the ridges, but they’re barely noticable, and I can appreciate that they have a practical purpose. Flanking both sides of the keyboard is a very MacBook-like speaker grill. The Go actually resembles a more curved, black-coloured version of Apple’s MacBook Air in some ways.

Thickness comes in at 13.4mm and 1.04kg. While the Pixelbook Go isn’t exactly the lightest or most svelte laptop around, its rounded corners help make it feel smaller than it is. 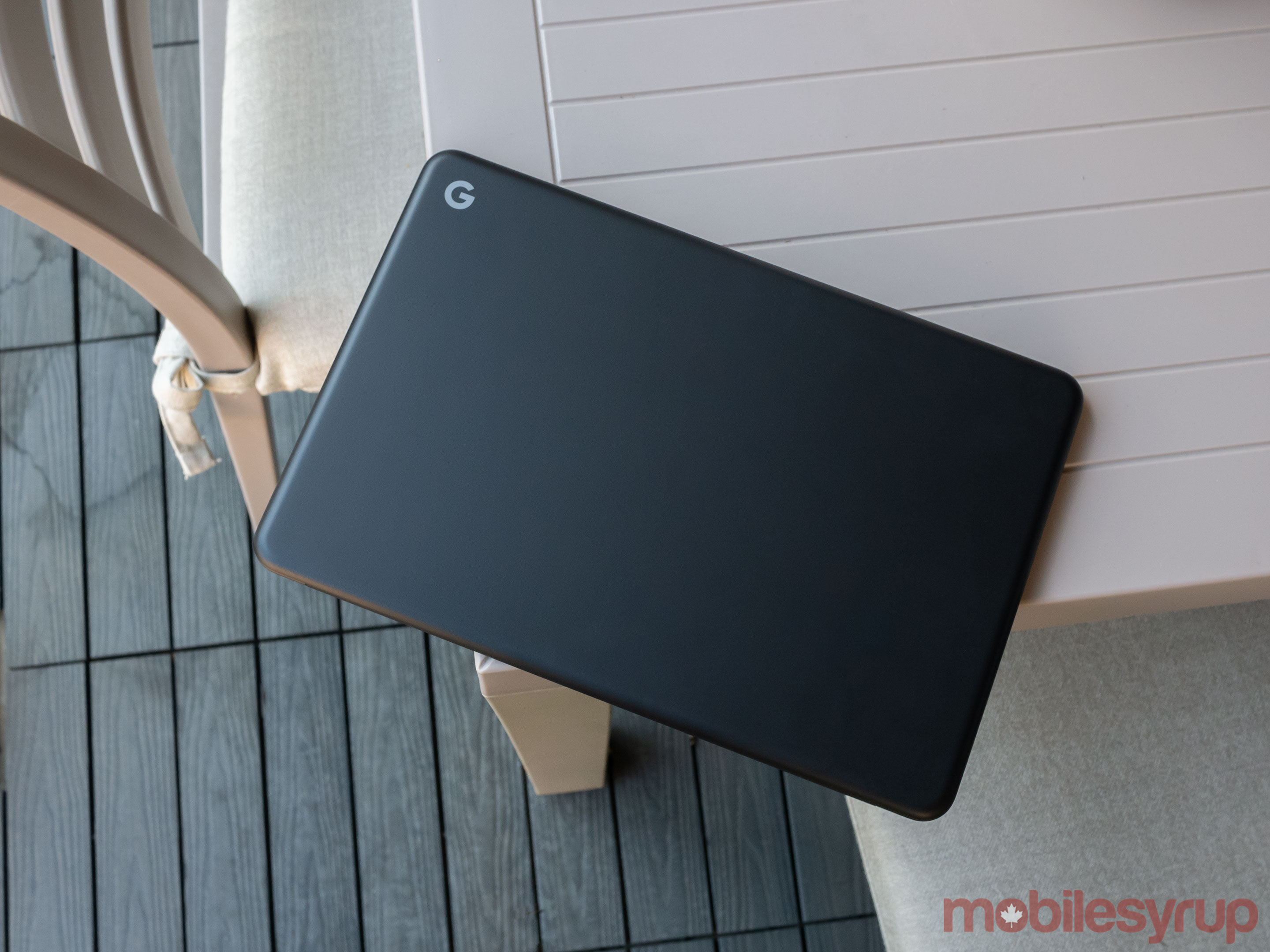 It’s worth noting that the rubberized palm rests featured in the Pixelbook are not part of the Pixelbook Go. While a subtle design change, these raised, rubberized grips prevent its display from being squished into its keys and scratching the screen, a common issue a lot of laptops, particularly Apple’s MacBooks, suffer from.

It’s disappointing Google didn’t include the same design in the Pixelbook Go.

The rest of the hardware 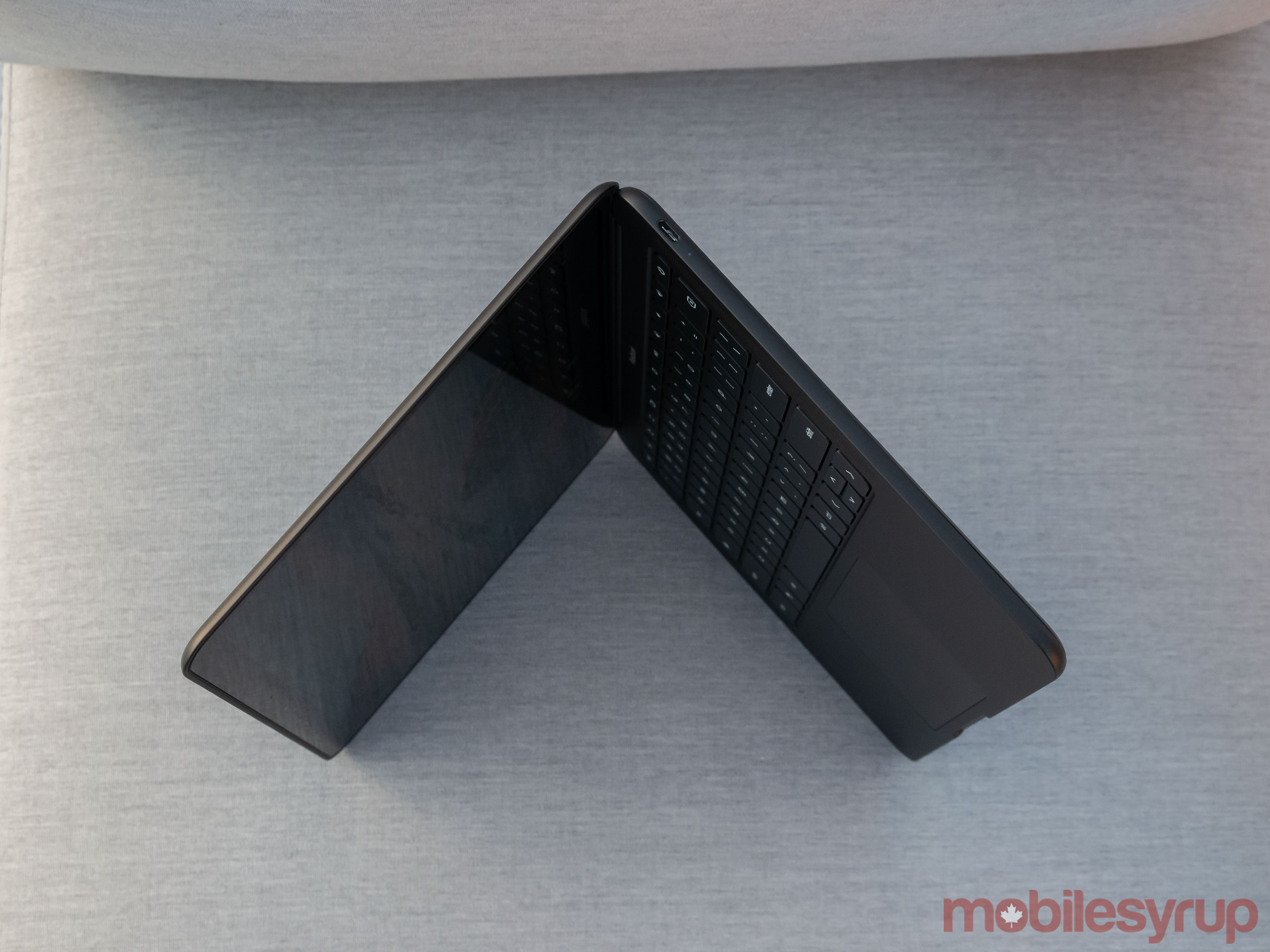 Regarding hardware, the entry-level $849 CAD Pixelbook Go features Intel’s 8th-generation Core M3 processor, 8GB of RAM and 64GB of storage. Any way you look at it, this is a steep price tag for a Chromebook powered by an m3 chip.

Bumping up to Intel’s Core i5 processor pushes the price to $1,099, with the highest-end Intel Core i7, 4K variant costing an astounding $1,849 CAD. All of the Go’s chips are also Intel’s lower-power Y-series variants, which is disappointing. 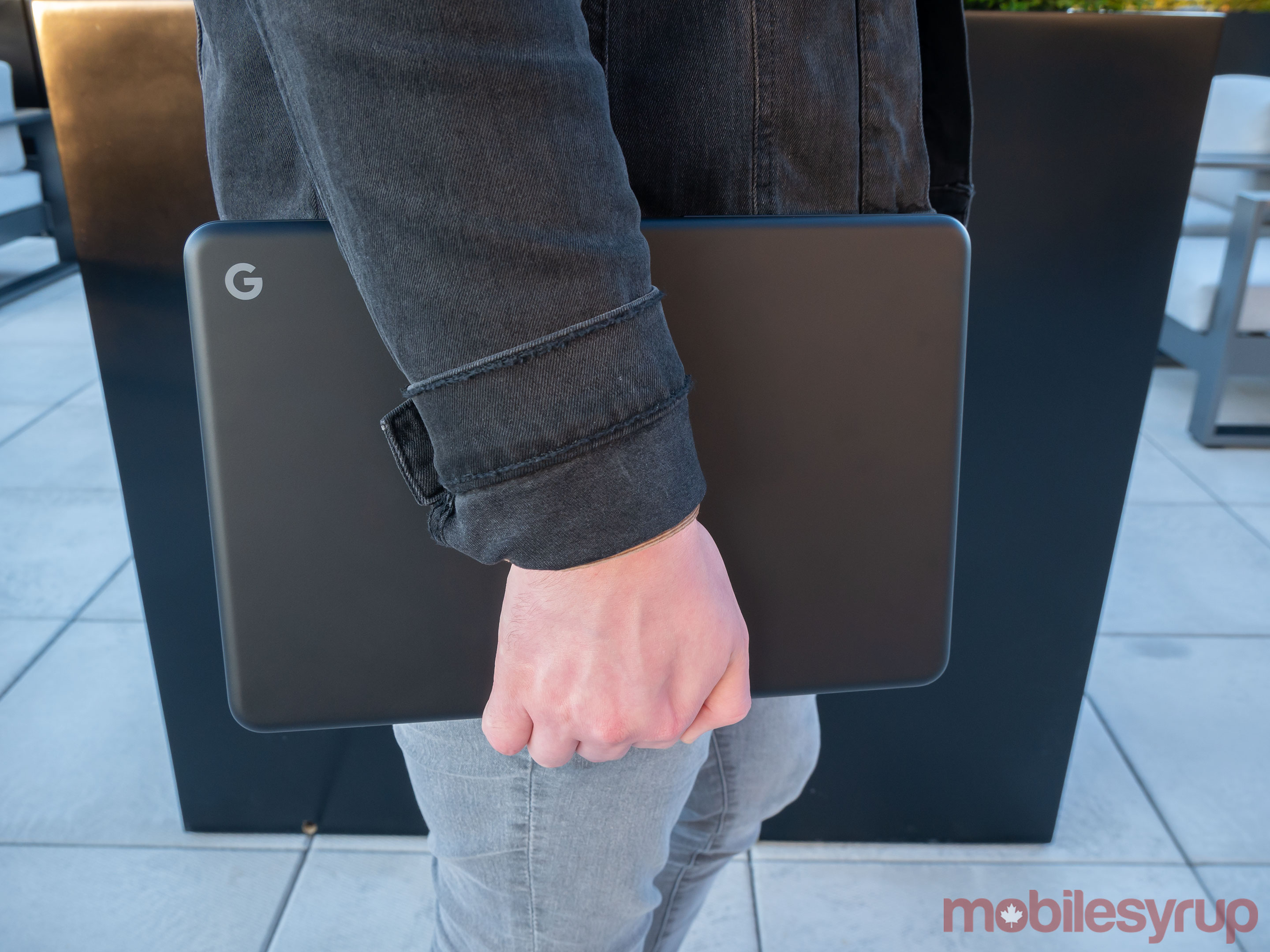 This brings me to my main issue with the Pixelbook Go. It’s an undeniably great Chromebook, but its price tag, particularly in Canada, is far from entry-level. To put the cost in perspective, the standard Pixelbook’s starting $1,299 price tag is only $200 more expensive than the i5 iteration of the Go. This makes the Pixelbook Go a tough sell in Canada, especially when there are similar Chromebooks from other manufacturers that cost far less.

The laptop also features two USB-C ports on each side, just like its predecessor, and supports fast-charging. Google claims the Pixelbook Go is capable of two hours of use after just 20 minutes of charging. In my experience, this estimate is pretty accurate. In total, the Go made it through a day with moderate use, clocking in at roughly 11 to 12 hours. 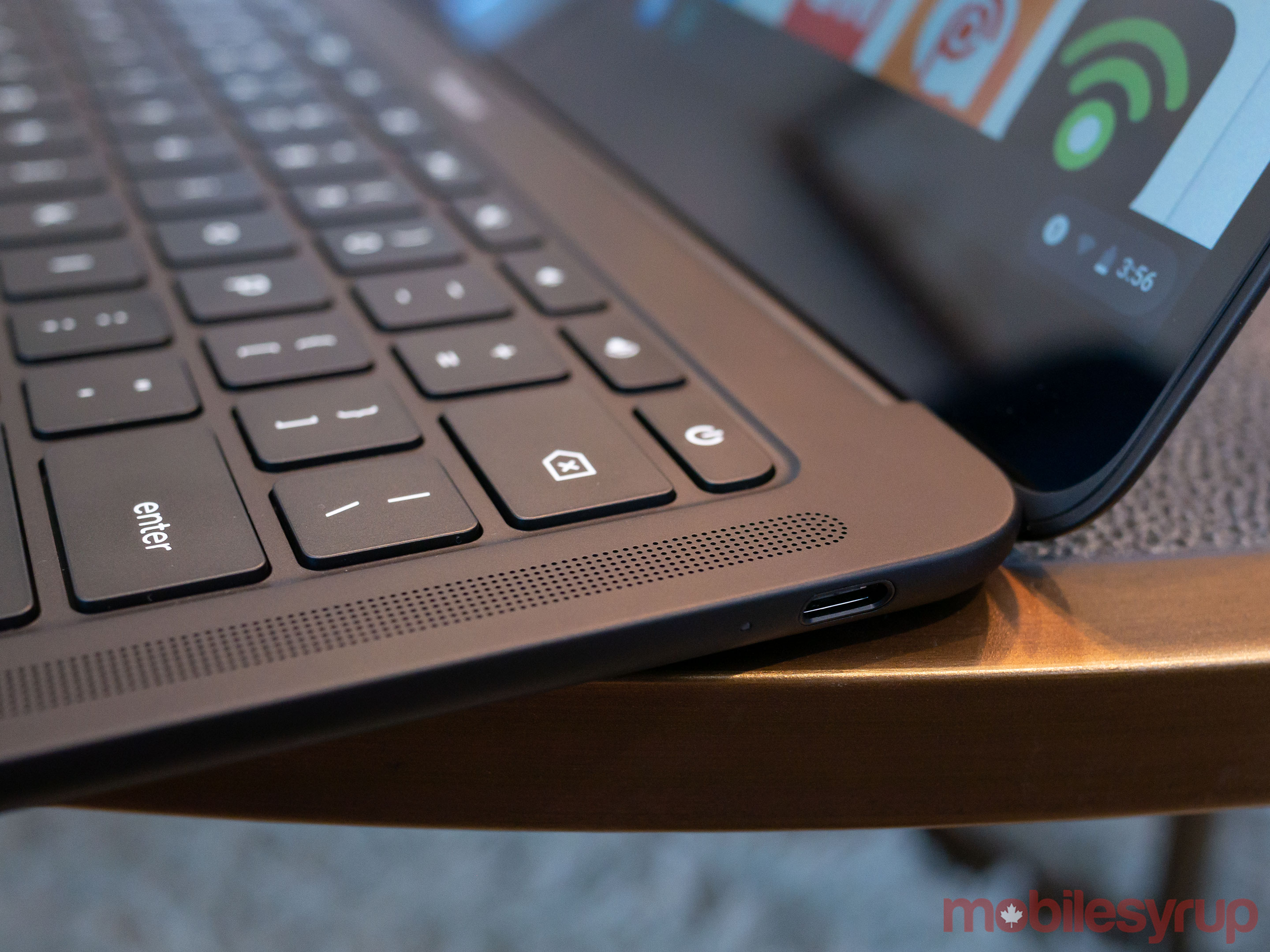 There’s also a 3.5mm headphone jack and a not-very-good 2-megapixel camera that is capable of shooting 1080p at 60fps.

Chrome OS is fast, responsive and straightforward, but I still find it limiting, especially when it comes to doing my day-to-day job at MobileSyrup. While the operating system’s selection of apps has improved over the last few years, it still isn’t great. For example, even though Adobe’s Creative Cloud-adapted Android apps are now available on Chrome OS, they’re slow, awkward and feel like a mobile app that has been stretched to fit a 13.3-inch laptop screen — which is precisely what they are.

While I’ve grown accustomed to Chrome OS during my time with the original Pixelbook, first-time users will likely find the experience a little jarring. Google’s desktop operating system shares similarities with Windows 10 and macOS Catalina, but it’s also a very different beast at the same time. 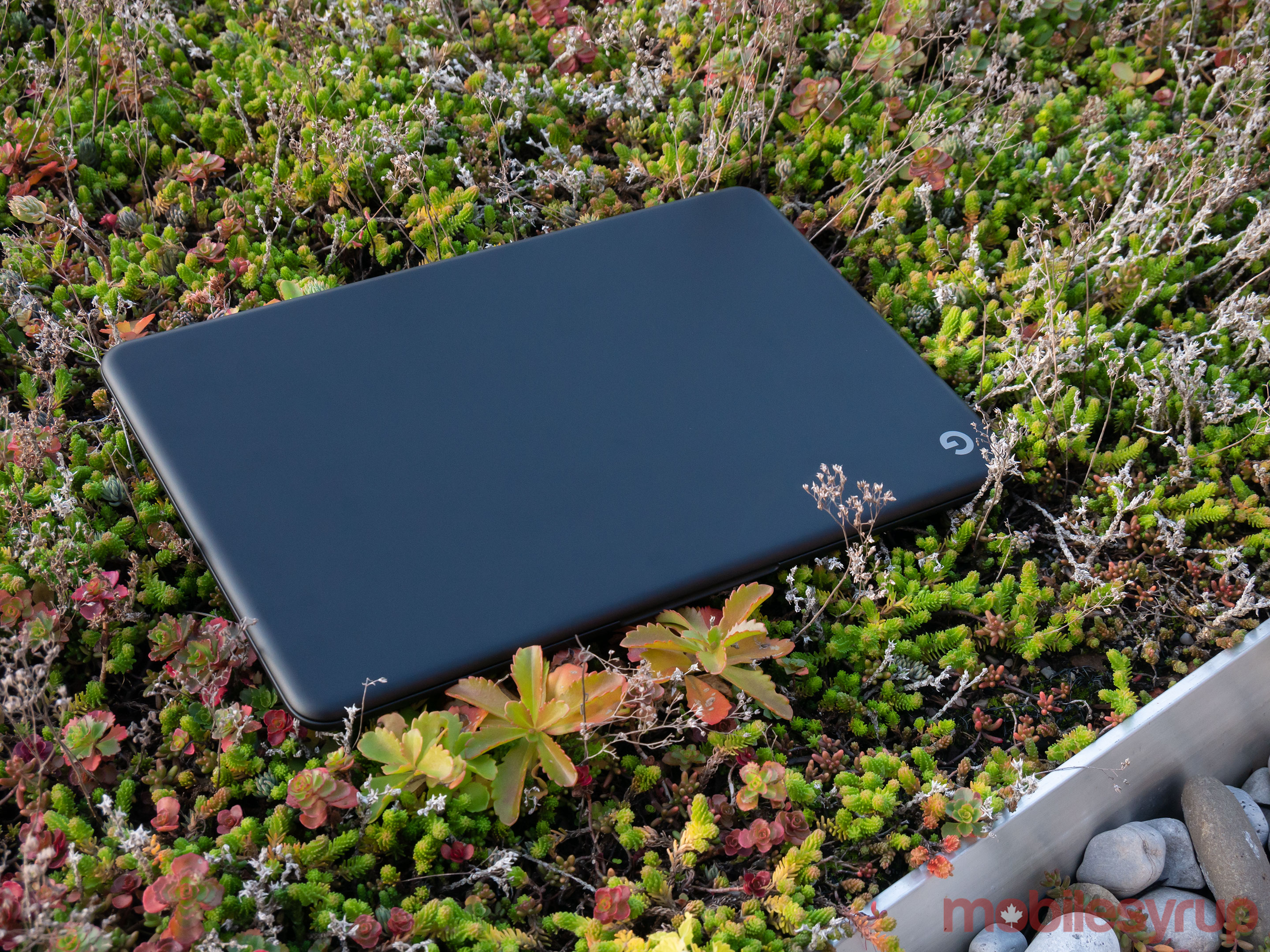 If you typically use web-based services like Google Docs, Gmail and Google’s Chrome web browser, like myself, you’ll be okay with a Chromebook. On the other hand, if you tend to use a lot of local programs, there’s a strong chance there isn’t a Chrome OS version of that particular app you need. With that in mind, Microsoft does offer Chrome OS expanded versions of its Office Android apps similar to Adobe.

I find Chrome OS to be the perfect operating system for surfing the web, watching YouTube videos, movies and even writing stories with WordPress. While I primarily use Apple devices, I live in a Google services world. 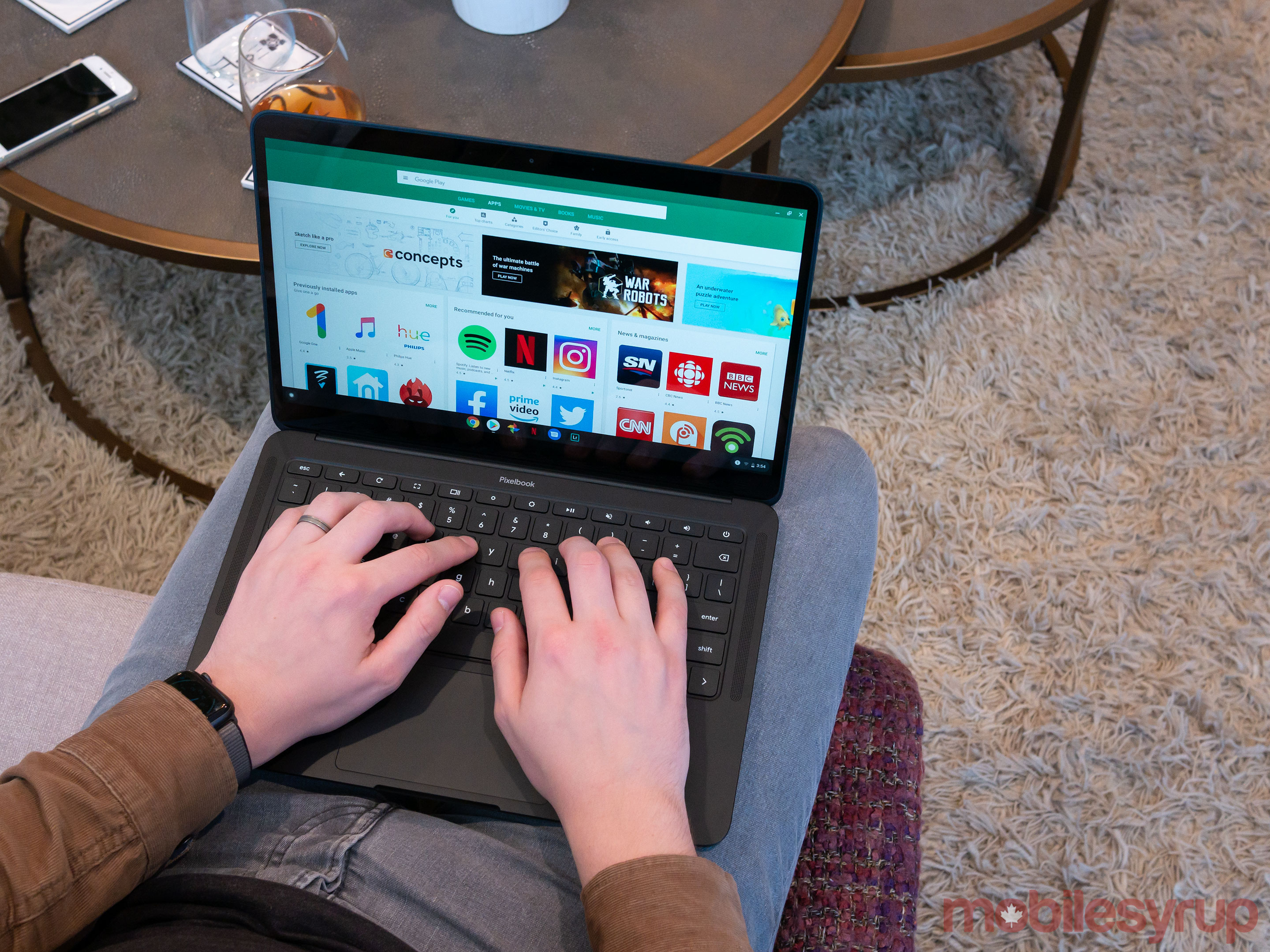 This makes it easy for me to jump between macOS and Chrome OS. When it comes to video or photo editing, I run into issues with Google’s lightweight operating system.

Though this is one specific workflow and use case, I suspect first-time Chrome OS users may experience similar problems.

If only it was cheaper

I really like the Pixelbook Go, but if price is a concern for you, there are more affordable, nearly as good Chromebook options out there. In fact, if you're opting for the i5 version of the Go, I'd recommend shelling out an additional $200 for the standard Pixelbook since it's a more unique and versatile device.

Still, the Pixelbook Go is a beautiful laptop, and its typing experience is unparallelled, building on the already solid foundation the original Pixelbook's keyboard provided.

The Pixelbook Go starts at $879 CAD for the Intel M3 version of the laptop with 8GB of RAM and 64GB of storage. Google's new Chromebook laptop will be available on November 4th.

"The Pixelbook Go is a beautiful laptop, and its typing experience is unparallelled, building on the already solid foundation the original Pixelbook's keyboard provided"