This Chromebook has a few issues 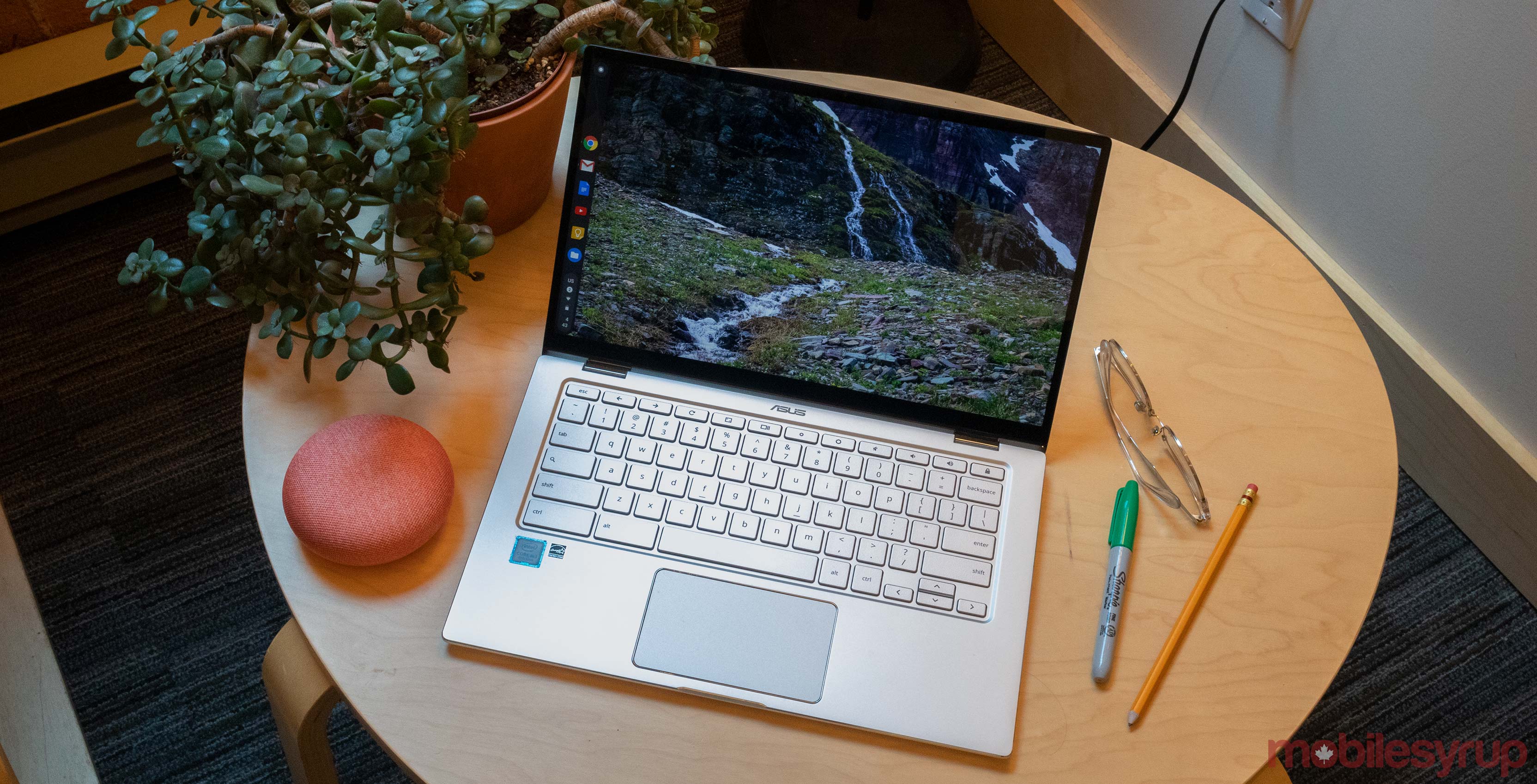 Chromebooks have come a long way in both form and function since their inception in 2011, and the Asus Chromebook Flip C434TA is evidence that laptops don’t have to cost an arm and a leg to meet regular consumers’ needs.

While the Flip isn’t perfect for everyone, I could see it checking the right boxes for most people when they’re looking for a new computer.

For instance, the typing experience is second to none, and the large 14-inch screen — which gives the notebook a fantastic 87 percent screen to body ratio — is super immersive.

If you’re tired of using a Mac or Windows computer and you’re looking for a simple machine to do some word processing and internet browsing, it doesn’t get much better than this.

Asus has done the hardware right, for the most part 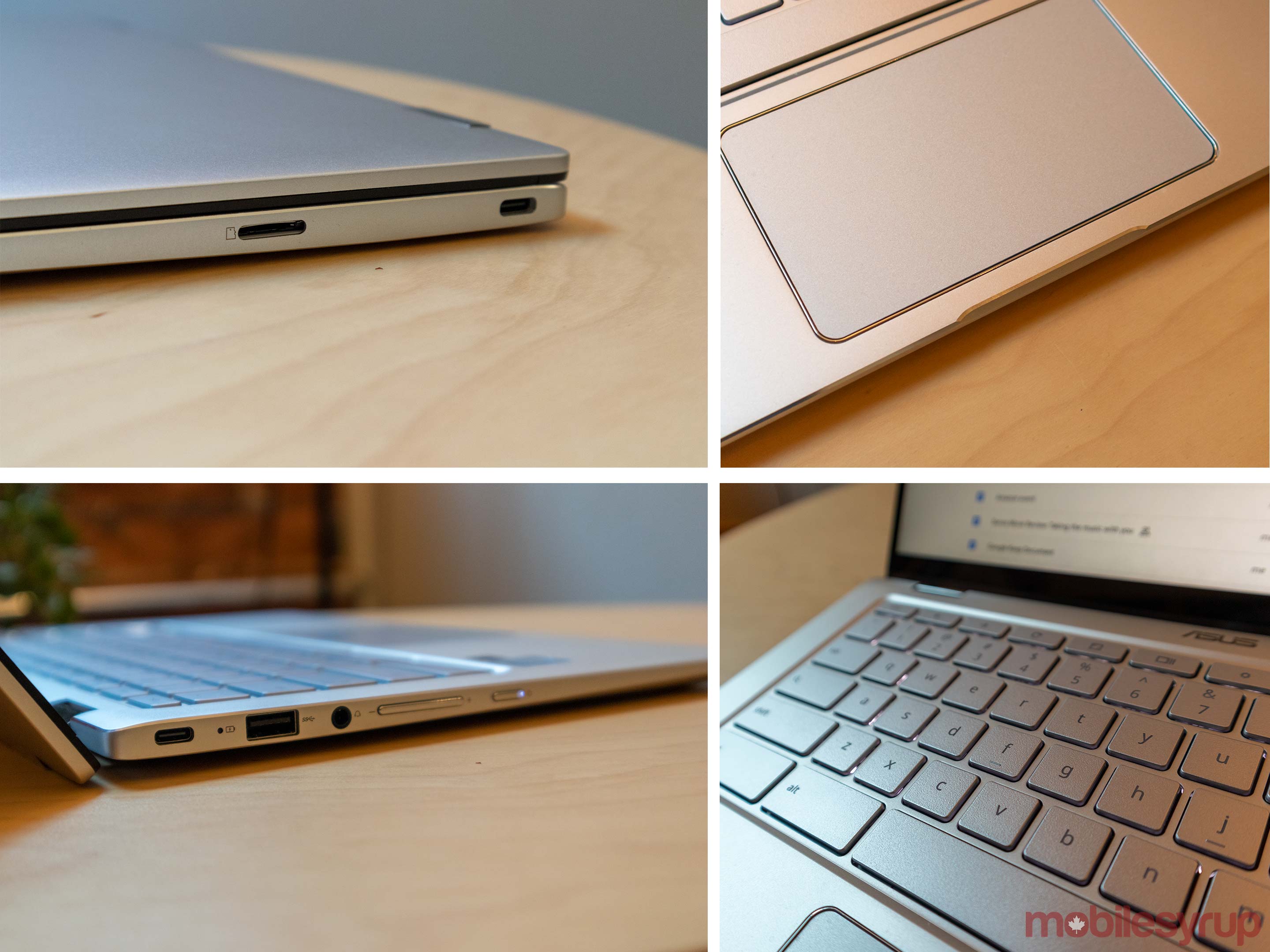 Hardware is the Chromebook Flip’s most becoming aspect. It features a silver metal design that feels both premium and sturdy.

The Flip’s keyboard is a dream. It brings me back to my first MacBook Air from 2016, which famously featured one of the best keyboard experiences around. Each key has a perfect amount of travel and click, while also being relatively quiet compared to the loud clacking of many other keyboards. The key travel is specifically 1.4mm. The laptop also uses a unique hinge design to push the keyboard toward the user at a slight angle, which makes typing more comfortable.

One downside with the Flip is that the keyboard’s backlighting could be better. That said, it still works, but too much light leaks out from in between the keys for my liking.

The Flip’s trackpad is another downside. I got used to it after a few days, but it falls short of the trackpad featured in Apple’s laptops. For example, I often found that hitting smaller targets resulted in me clicking on the wrong thing. Still, I was able to use it, and I found increasing the cursor’s speed in the settings helped it feel more responsive.

The final important aspect is the screen. It isn’t bad by any means, but it’s not high-end either. Its colour reproduction is stable, but there’s no way to calibrate it.

Where the screen excels is its large form factor and tiny bezels. Asus has managed to fit a substantial 14-inch display into the chassis of a 13-inch laptop. This means when you pry open the Chromebook’s lid, you’re greeted with an expansive panel that stretches to each edge. I found myself even using apps in full-screen mode to hide the Google search bar on the Flip since the screen real estate and tiny bezels were so nice.

There’s enough here, but be wary of what you want this machine to do 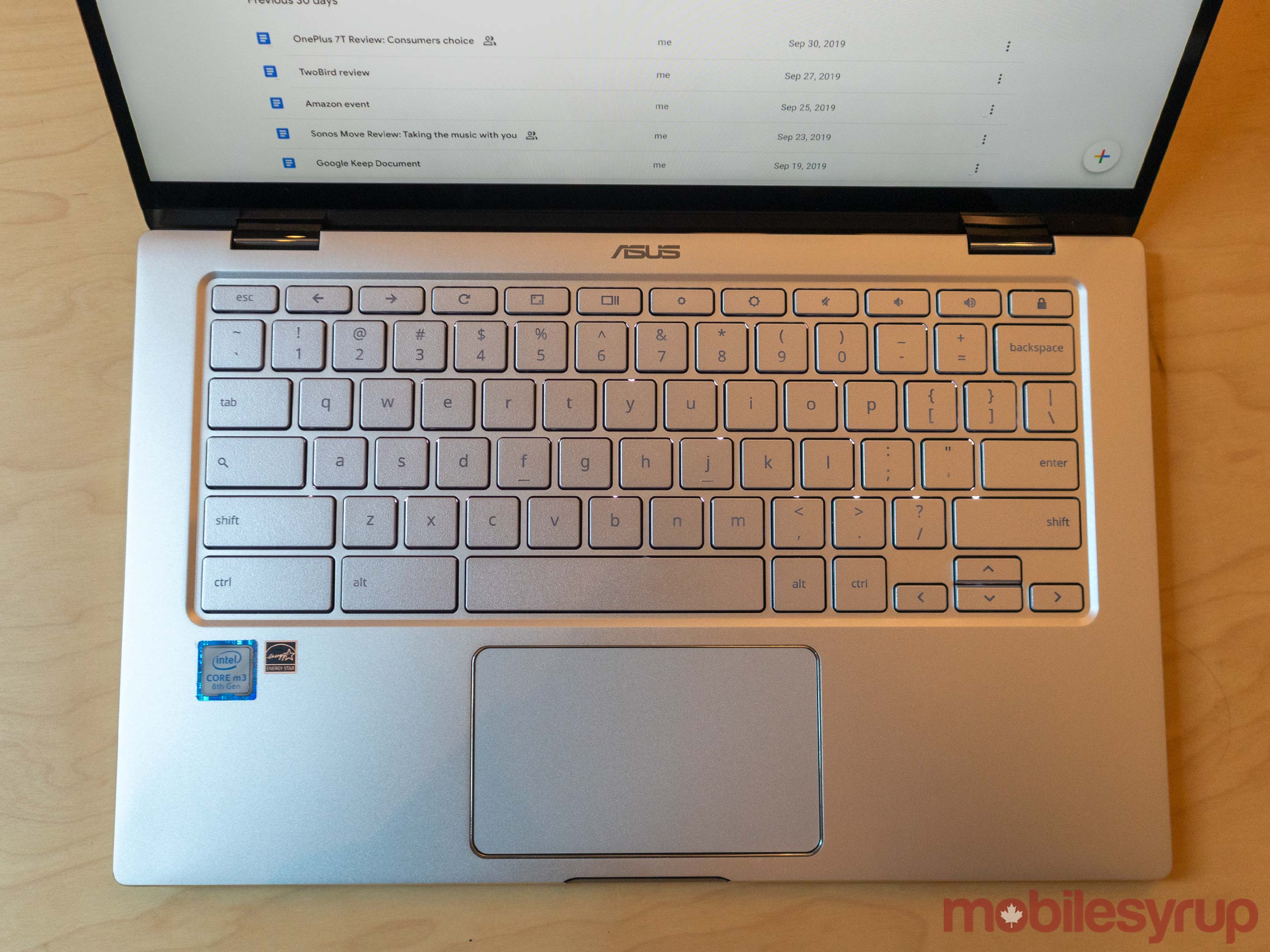 The Flip doesn’t pack the greatest array of internal hardware. However, it gets the job done. While sometimes, I felt like I had too many tabs open and the computer was slowing down, I could usually have at least nine open, if not more without issue.

The other major caveat is that you can only buy the computer with 64GB of storage. I also noticed that it only presented me with about 49GB as usable storage.

Frankly, if you’re planning on using the Flip as your main computer, you’re going to have to be ready to commit to the cloud. You can download things for offline use, but you’ll likely need to back them up to the cloud and wipe them from your hard drive whenever you’re back online.

It’s also worth noting that Asus rates the device’s battery for 10 hours, although I was only able to get about half of that with my usage. 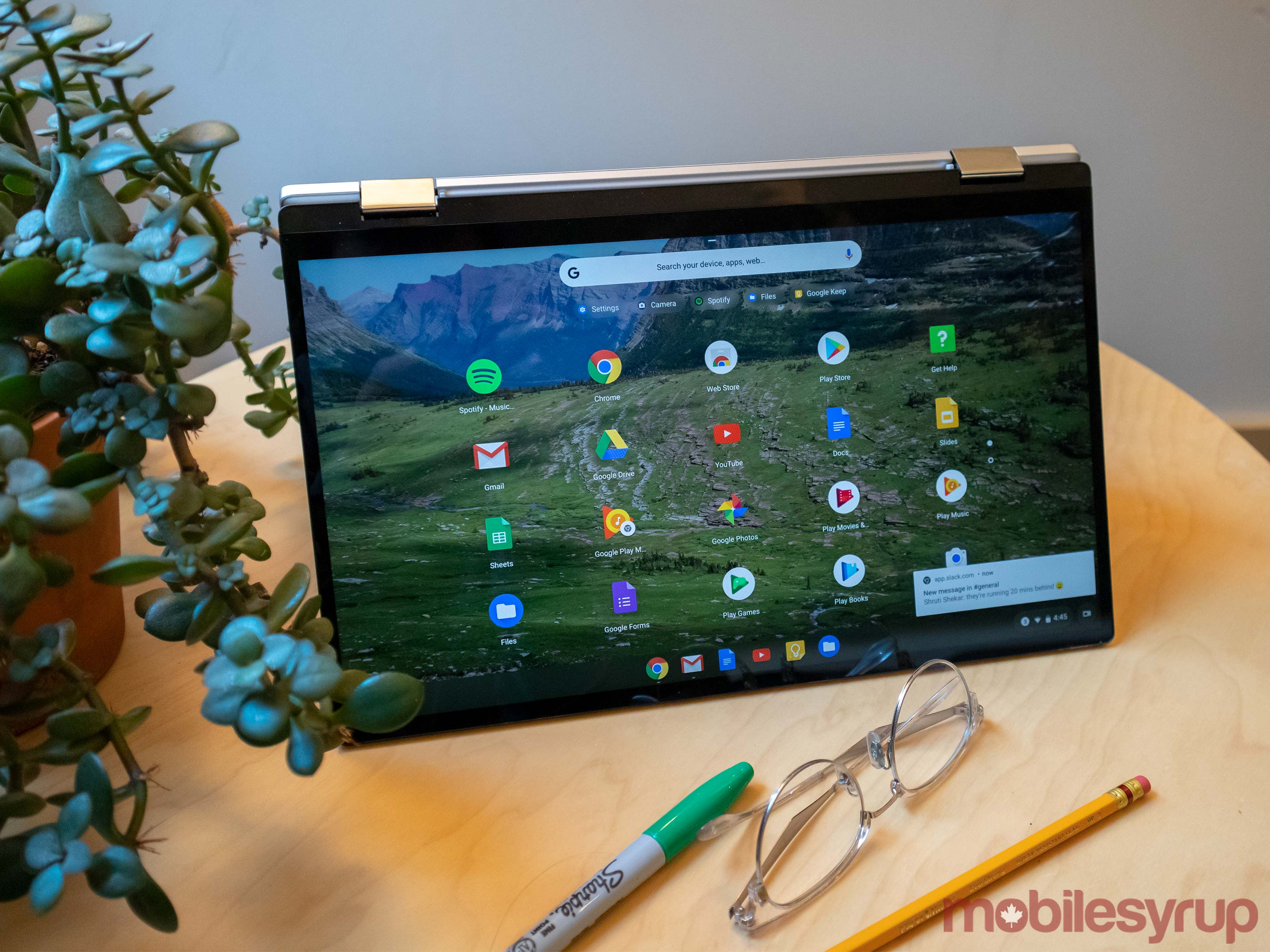 The final aspect of the Flip that I need to address is Chrome OS. I have very mixed feelings about the operating system. On the one hand, I love the simplicity of it, but on the other, I wish it could do more.

I  think that it can do enough for most people. I’ll quantify this by stating that in my mind, the average user needs a computer to write the odd document using Google’s online tools like Sheets, Photos, Gmail and also browse the web.

If what you need a computer for falls into these categories, then a Chromebook is right for you. If you need to do things like resource-intensive photo editing with Photoshop or Lightroom, or other creative tasks, then Google’s lightweight operating system falls short.

Something to love about it is its ability to run Android apps, which work moderately well and is a handy feature.

It also functions more like a tablet with an app drawer, which makes finding and organizing your apps easy.

Chrome OS also gets smaller system updates often, which is nice since it brings new features to the operating system. For example, since I’ve started using the Flip it’s been updated to include a new multi-virtual-desktop functionality so you can have more than one digital workspace at a time, and Google Assistant support.

Overall, you need to take stock of what you want from a computer before you dive into the world of Chrome OS. Personally, I think it’s great, but there are some issues like those mentioned above that hold it back from working for you. 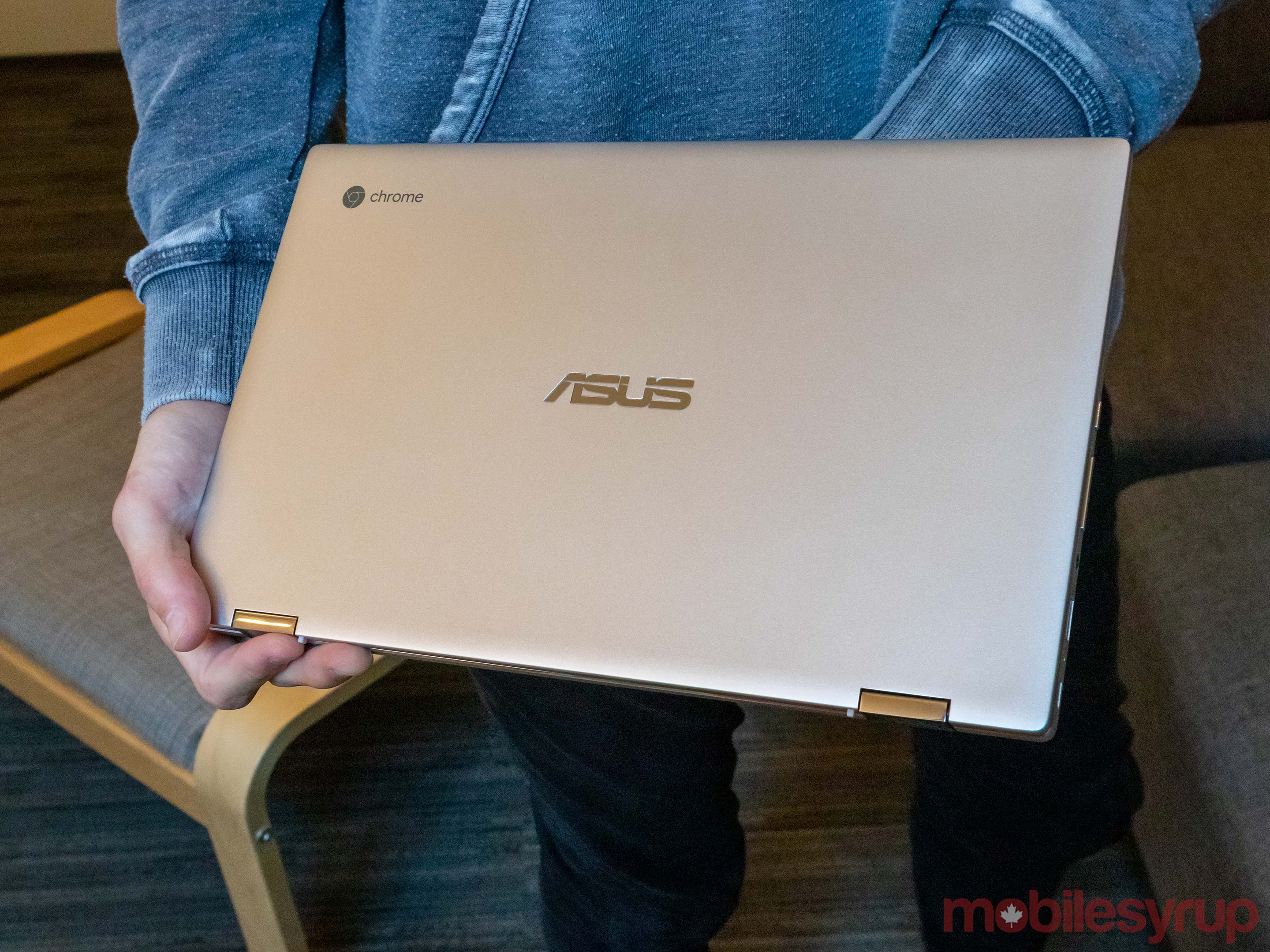 Despite the drawbacks, I love this machine

Even though the Flip isn't perfect, there is a lot to love about it.

My admiration for its keyboard, design and simple operating system are almost enough for me to make this my main computer, but its lack of the Adobe Suite holds me back.

However, for the millions of Canadians that don't need to use those programs, this is an excellent device with a lot to offer. Honestly, the web browsing experience is fantastic, it's screen is immersive and did I mention that it can fold all the way around to be used as a tablet? These are all functions that people use every day and the Flip does extremely well.

While it may not be as high-end as Google’s Pixelbook, it’s still a really premium option. For what Chrome OS is capable of, I think the Flip is a more suitably priced machine.

At its core, the Flip is a great notebook that can ideally get better over time as ChromeOS continues to grow.

The Asus Flip C434TA generally starts at $799, but I've seen it on sale as low as $550, which is an absolute steal for a device of this calibre.

"At its core, the Flip is a great notebook that can ideally get better over time as Chrome OS continues to grow"