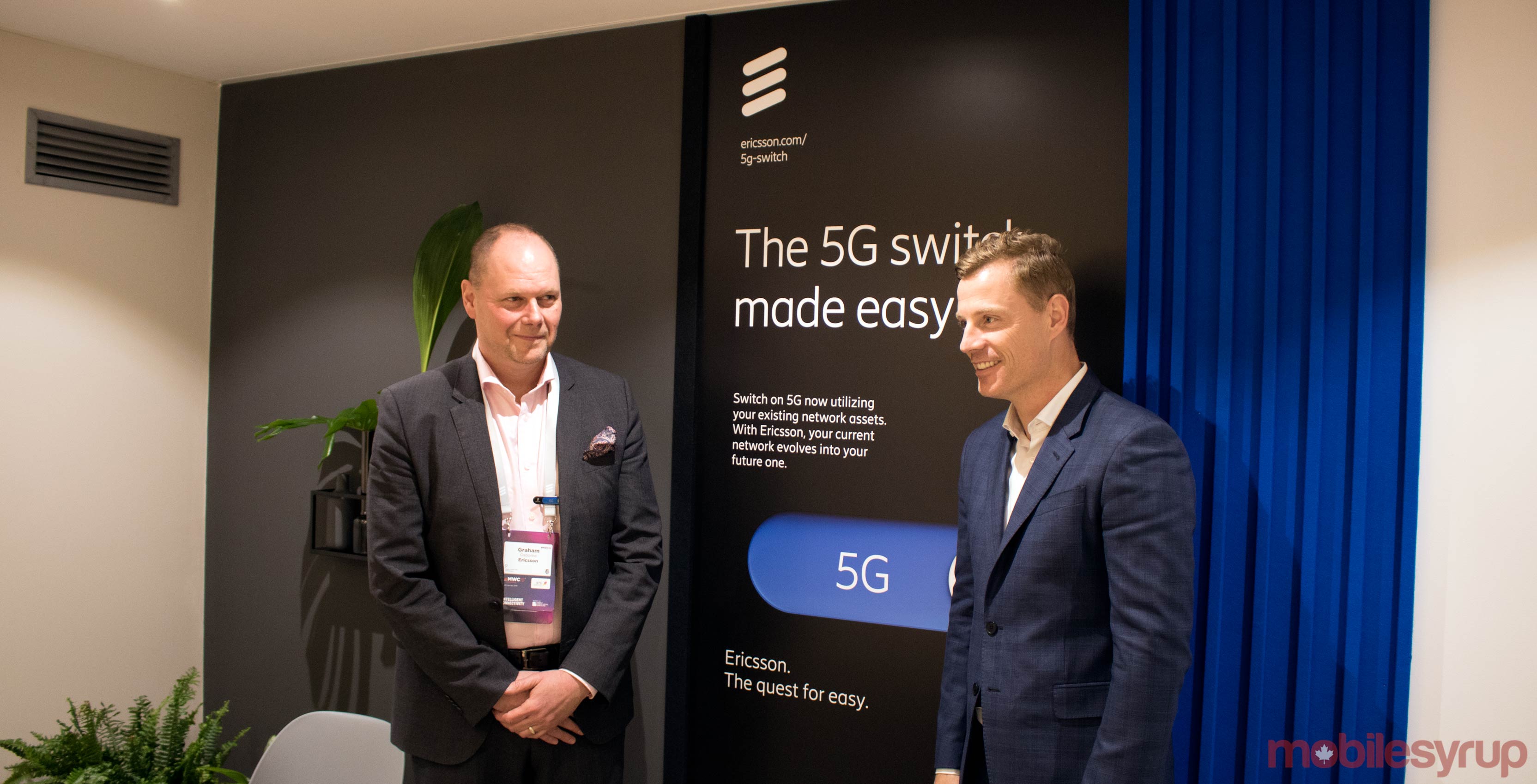 Ericsson Canada is ready to sell its 5G-ready equipment to any operator, including national carriers Bell and Telus, whether or not Huawei gets banned from Canada, the company’s head said.

“Ericsson as a vendor sells to anyone that wants to buy our equipment and we don’t think about Huawei and if it is around or not, we basically compete based on our services our technology, our people, our brand,” Ericsson Canada’s president Graham Osborne said during an interview with MobileSyrup at Mobile World Congress (MWC), hosted this year in Barcelona, Spain.

“So anyone who wants to buy our gear, I’m happy to sell it.”

Osborne wasn’t able to comment on whether Bell or Telus had reached out to Ericsson on a possible partnership, but said Ericsson has a good relationship with both carriers.

“We are in the Bell network and MTS in Manitoba. So we actually have a radio footprint there. We do business with them, with Bell and Telus in different areas already, so it’s not that it’s a brand new field for us,” Osborne said. He is also the company’s senior vice-president of Canadian sales.

Canada and China have had a frosty relationship ever since Huawei’s global CFO Meng Wanzhou was arrested in December. The U.S. charged her, Huawei and its subsidiary Skycom with 13 counts of bank and wire fraud.

Public Safety Minister Ralph Goodale is currently overseeing two independent reviews, one on 5G in the country and the other on Huawei and national security. Canada has not banned the Shenzhen-based telecommunications company yet.

“So anyone who wants to buy our gear, I’m happy to sell it” – Graham Osborne

In its Q4 2018 results, Bell’s CEO said it would be able to roll out 5G in time even if Huawei was banned.

MobileSyrup reached out to Telus for comment and will update the article with more information when it is available. In its Q4 2018 results, Telus said it would be an “incremental” cost and would affect the timing of 5G deployment.

Jane Rygaard, Nokia’s head of marketing of advanced mobile networks, said if companies wanted to, they could take the next step and use Nokia’s 5G technology when the spectrum was available. During this separate interview, she was not specific to Bell or Telus.

“We already have customers in Canada on 4G, so we deliver those networks, so for us, it’s a natural thing when you get the spectrum available in Canada then we are for sure ready to help the customers out there like we are helping 4G networks,” she said.

She did note that Nokia had a good relationship with Bell.

“Bell Canada is a good customer,” Rygaard said, referring to the use of Nokia’s technology to deploy 3G and 4G.

Rygaard also was not able to say if Bell or Telus had been in touch with the company, but said that Nokia was “ready to deliver to Canada when the final [5G] strategy is put in place.”

“We are watching what governments are doing around the world for what decision is being made and what impact it will have on our customers,” Rygaard said.

Osborne explained companies are able to get this spectrum to use and test 5G in “fairly small reasonable” areas.

“This helps us build the ecosystem and to help people understand what 5G can do for them. Not just operators but entrepreneurs, small companies, and individuals,” Osborne said.

Osborne also noted that Ericsson has a very good working relationship with Rogers to deploy 3G, 4G and now 5G.

“The baseband and all of our hardware in the platform is 5G ready. We’re not waiting for 5G to start, for us 5G already started from a technology and hardware process,” he said.

A Rogers spoksperson said in an email that the company was committed to working with Ericsson to deploy 4.5G and 5G spectrum.

Rogers expects to deploy the next iteration of mobile technology in 2020 and has been preparing for it by testing with frequencies. Last year, Rogers completed live 5G testing at Rogers Centre and Rogers has also partnered with the University of British Columbia to build a 5G hub on campus that is used as a testbed and blueprint for 5G innovation.

For both Ericsson and Nokia, it’s evident that 5G will truly offer another level of efficiency in various industries and could even offer the gaming industry potential revenue.

To note, latency, in this case, would be the amount of time it takes for data to travel from one point to another. Industry researchers say 5G will be able to deliver incredibly low latency.

Rygaard explained that right now when you’re playing a game rendering is heavy and most devices don’t have the computer power.

“But what if you can use edge cloud and if the latency is so good and you have a full computer standing somewhere else that the rendering can happen [where the computer is] and you can play with low latency.

“That means any screen could then turn into a gaming device and you can use the network to process the [images], not the device,” she said.

Rygaard added Nokia is seeing a lot of consumer focus on entertainment to enhance these types of experiences.

5G will help with low latency

Most people are still trying to understand the full capability and scope that 5G has. Industry leaders have suggested that the network would benefit the rollout of smart cities, autonomous vehicles, and perhaps fixed rural internet services.

Osborne said a dream reality for Ericsson would be to have zero latency when deploying the technology.

For example, Osborne explained that autonomous vehicles require the most up to date information to function, and in order for it to successfully make a right turn, there needs to be zero latency.

“You want to make sure there is the latest information going in that car, that nothing surprises it and near field, communication isn’t going to provide all that information. If a car is coming at you at 100 miles an hour in the other direction, you need low latency [for the car to recognize that there is a car coming], and that is something 5G can deliver.”

With files from Dean Daley