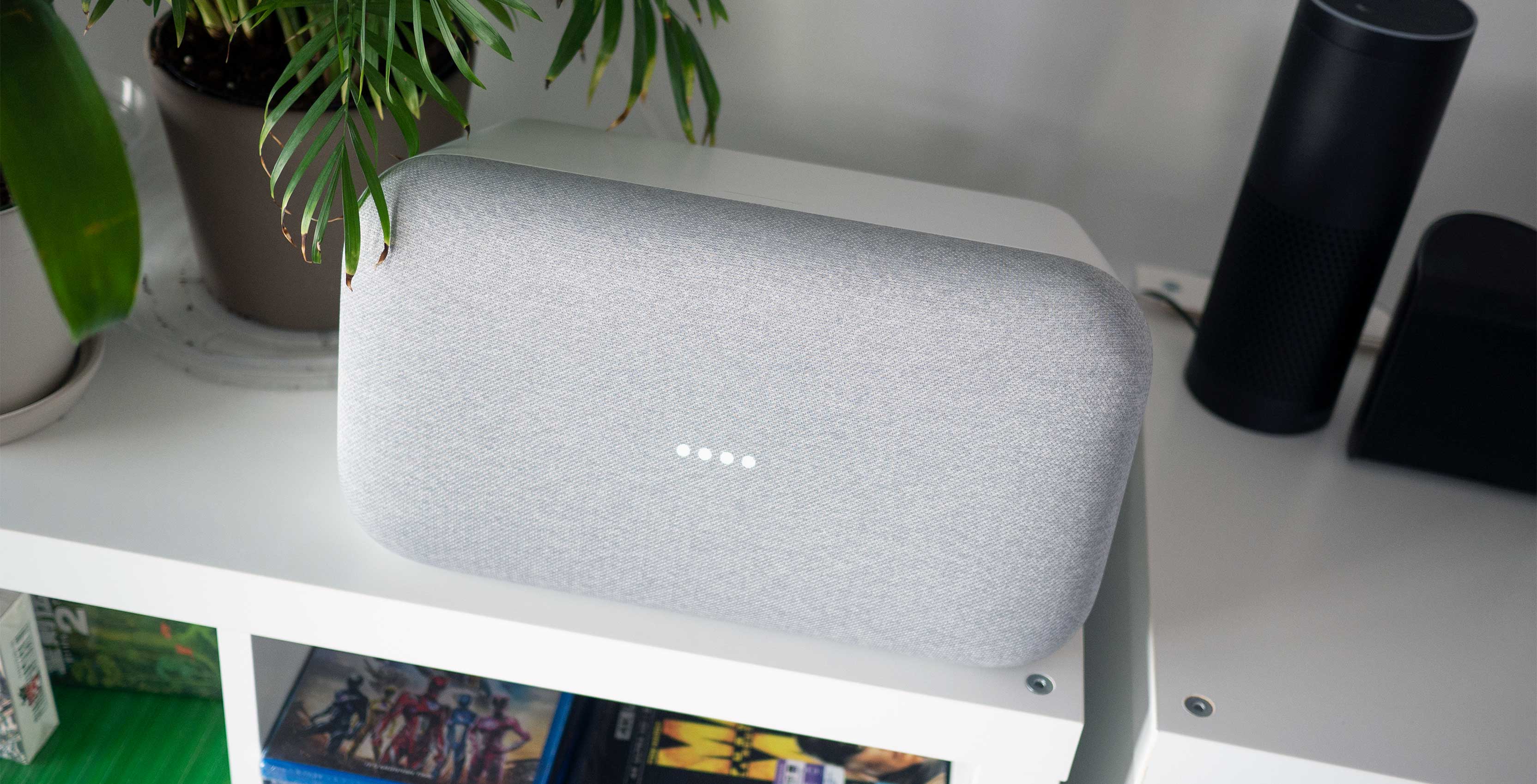 Back when I reviewed the first Google Home, one of my key criticisms of the smart speaker was how lacklustre its sound quality is in comparison to most of Amazon’s Echo devices.

Especially when sitting beside the the standard 2nd-generation Amazon Echo, the base model Google Home just isn’t up to par with the majority of smart speakers on the audio quality front. The Google Home Mini is equally dismal in the sound quality department. 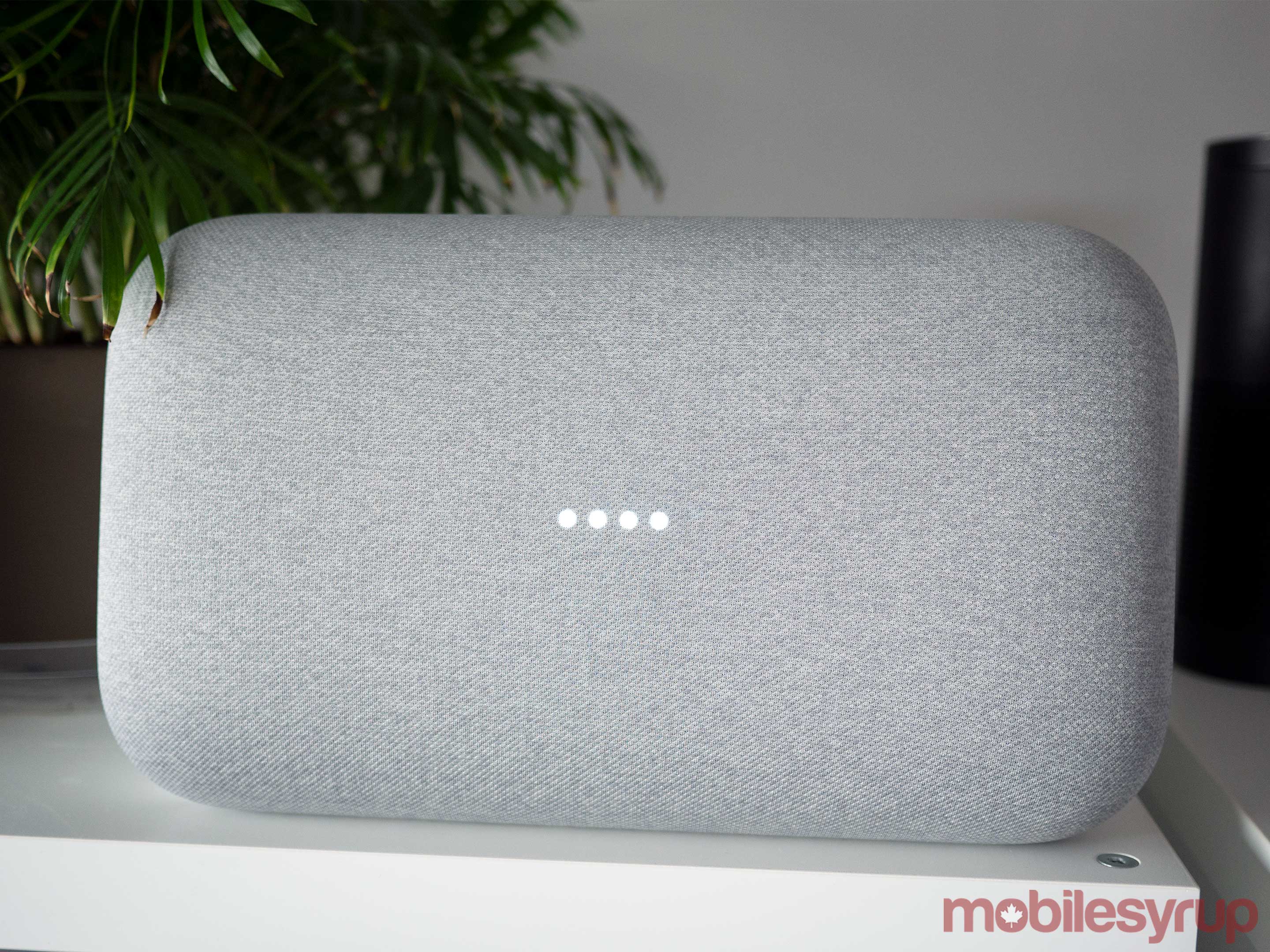 The Home Max though, Google’s high-end smart speaker that made its way to the United States a few months ago and is now finally getting a release in Canada, is a completely different story.

The Max amounts to one of the best sounding smart speakers currently available in Canada, especially since Apple’s HomePod is not set to launch until June 18th.

The world of Wi-Fi connected smart speakers has blown up over the last few years, with almost every major tech giant, including Microsoft, Apple, Google, Amazon and even connected speaker maker Sonos, jumping in on the action. 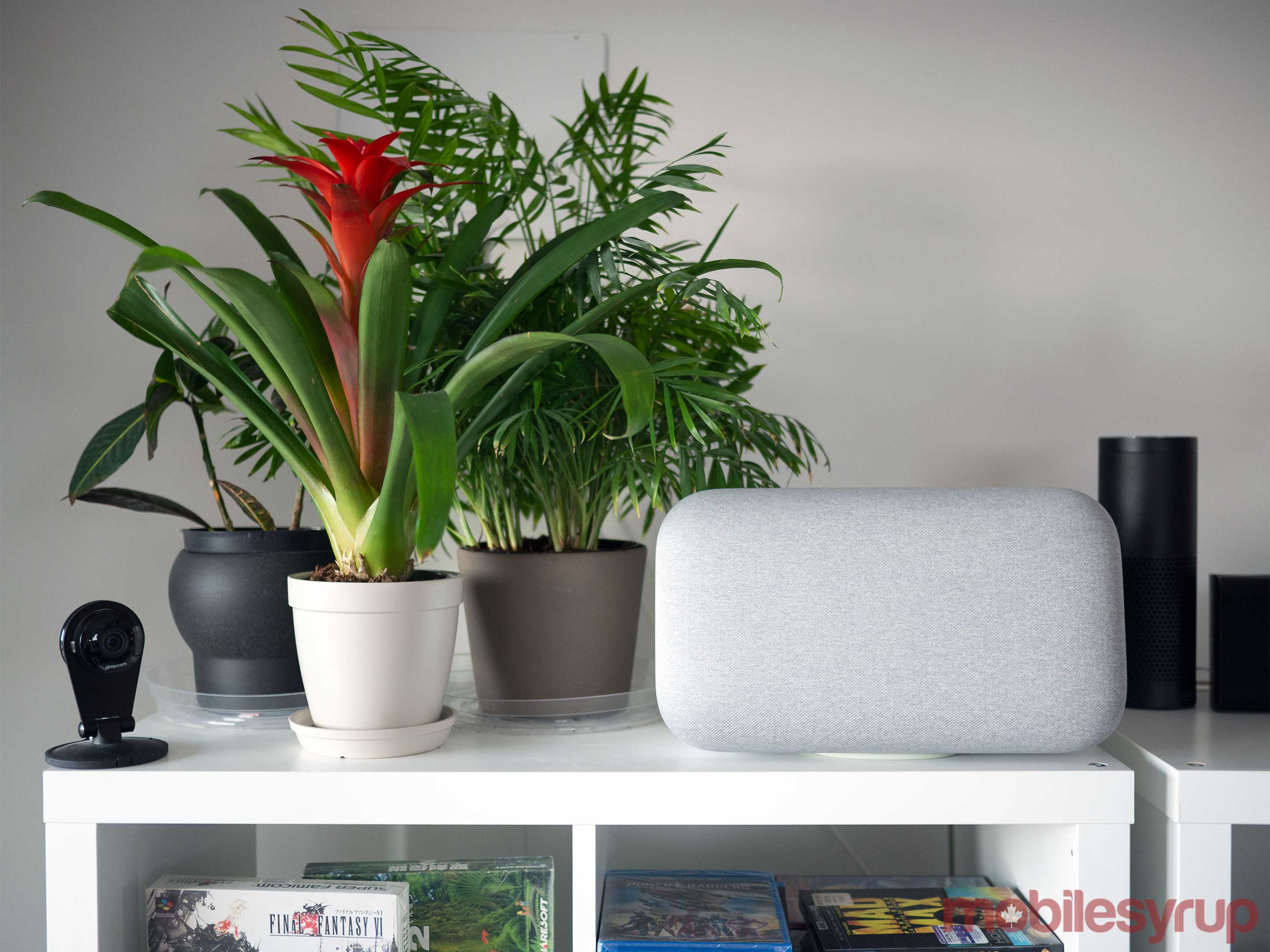 While most of the smart speakers released so far — with the exception of the Sonos One — have been low-end and relatively inexpensive, the Google Home Max is designed with high-end audio in mind and features an equally high-end price tag.

The Max is both the largest (it’s massive) and most expensive smart speaker to makes its way to Canada so far, coming in at a pricey $499 CAD. While the Home Max features the same smart functionality as the Home and Home Mini, the device’s real draw is audio fidelity.

With the Max taking on Sonos and other high-end manufacturers, the main question surrounding the pricey smart speaker is how it compares to the competition.

Large, but also minimalist and sleek 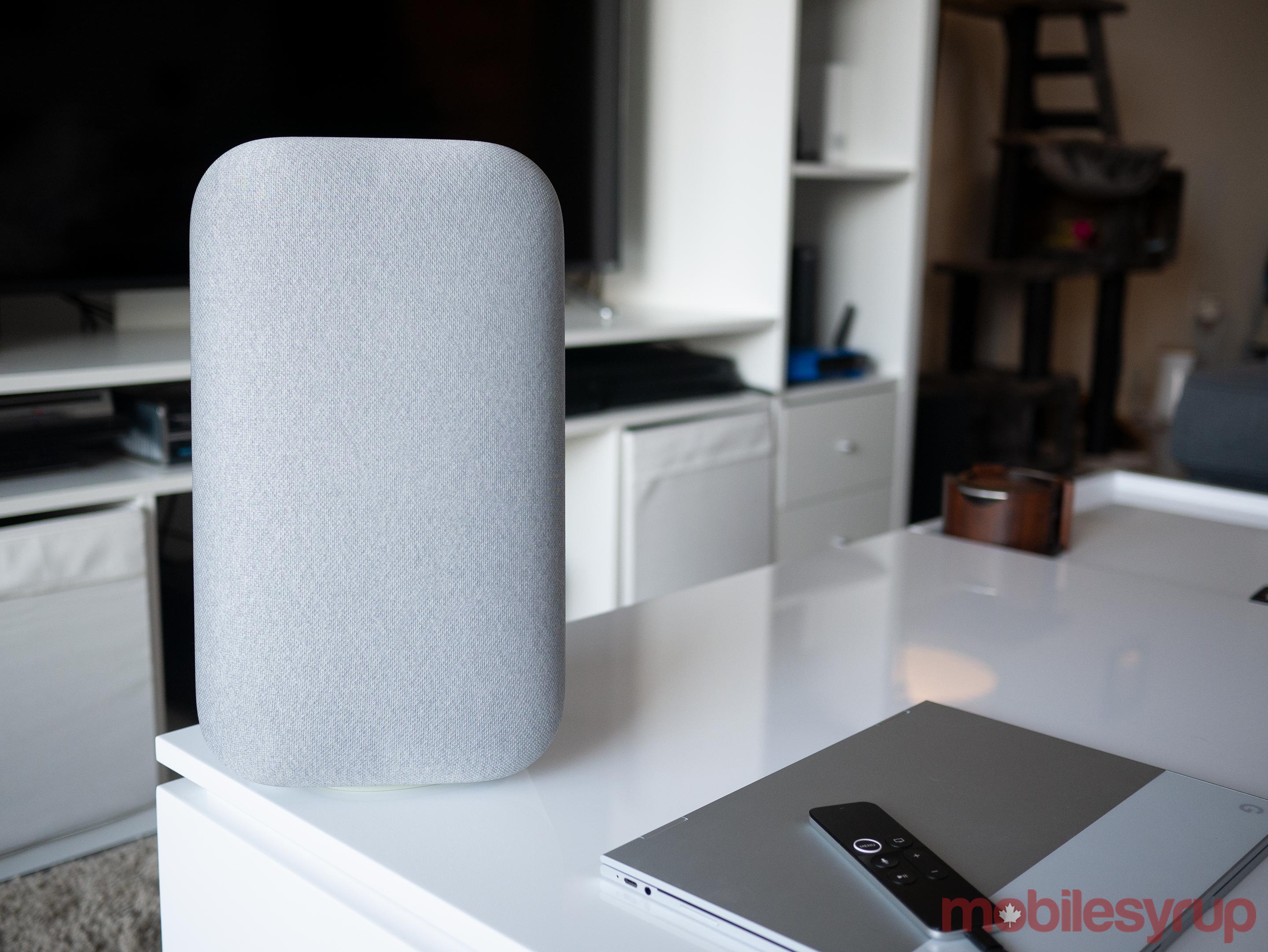 Since the Max measures in at a hefty 5.8kg (13lb), I found it difficult to find a location to put the speaker that made sense in my tiny home.

First I placed it in my kitchen but found it took up too much counter space. Next, I opted to put it on a side table near my couch, but again, came to a similar conclusion.

Finally, I decided on placing the Max on the top of my TV stand in a horizontal position. Unlike other smart speakers, the Max can be oriented either vertically or horizontally, making fit easily into most people’s home decor. 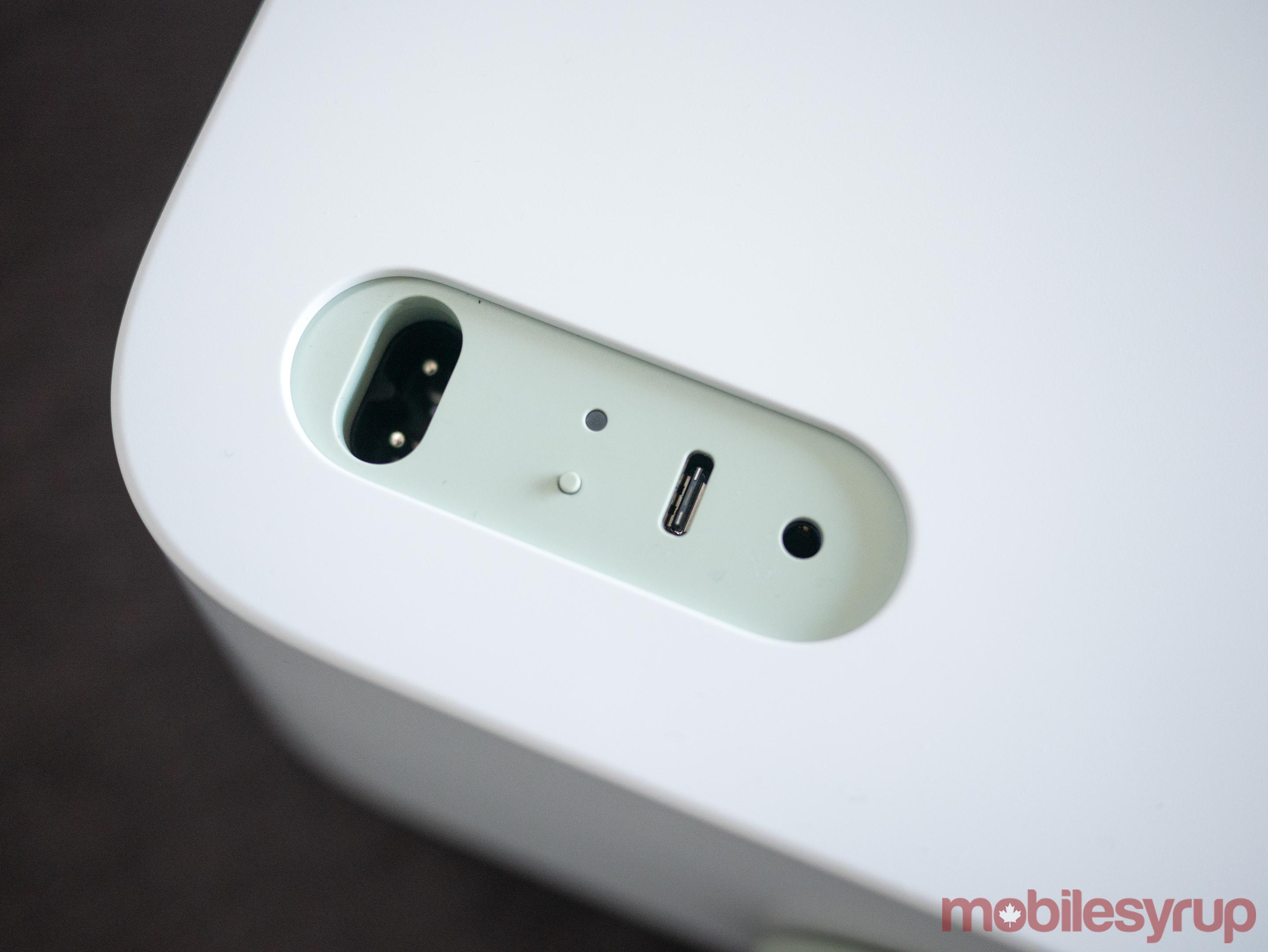 That said, placing the Max vertically switches the speaker to mono mode, while situating the speaker horizontally results in stereo sound output. The speaker switches between these two forms of audio output automatically thanks to built-in orientation sensors, which is a great move on Google’s part.

It’s worth noting that the Max doesn’t feature mounting points or a floor stand, so you really do need to find adequate surface space to place the speaker. While this probably won’t be an issue for most people, those who live in small apartments could have problems with finding an adequate location for the Google Home Max.

The Max also features six far-field microphones for picking up voice commands, a USB Type-C port that can be used with an ethernet adapter (I didn’t test this feature out) and a 3.5mm headphone jack in order to hook the Google Home Max to external devices like a record player or other audio device.

In general the Max feels like a solid, well-made speaker that’s able to go head-to-head in build-quality with established players in the audio space like Bose or Pioneer.

If you aren’t fond of the fabric-covered design of the original Google Home or Google Home Mini, you aren’t going to like the look of the Max. The Max also comes in both ‘Chalk,’ which is marketing speak for white, and black, or ‘Charcoal.’ 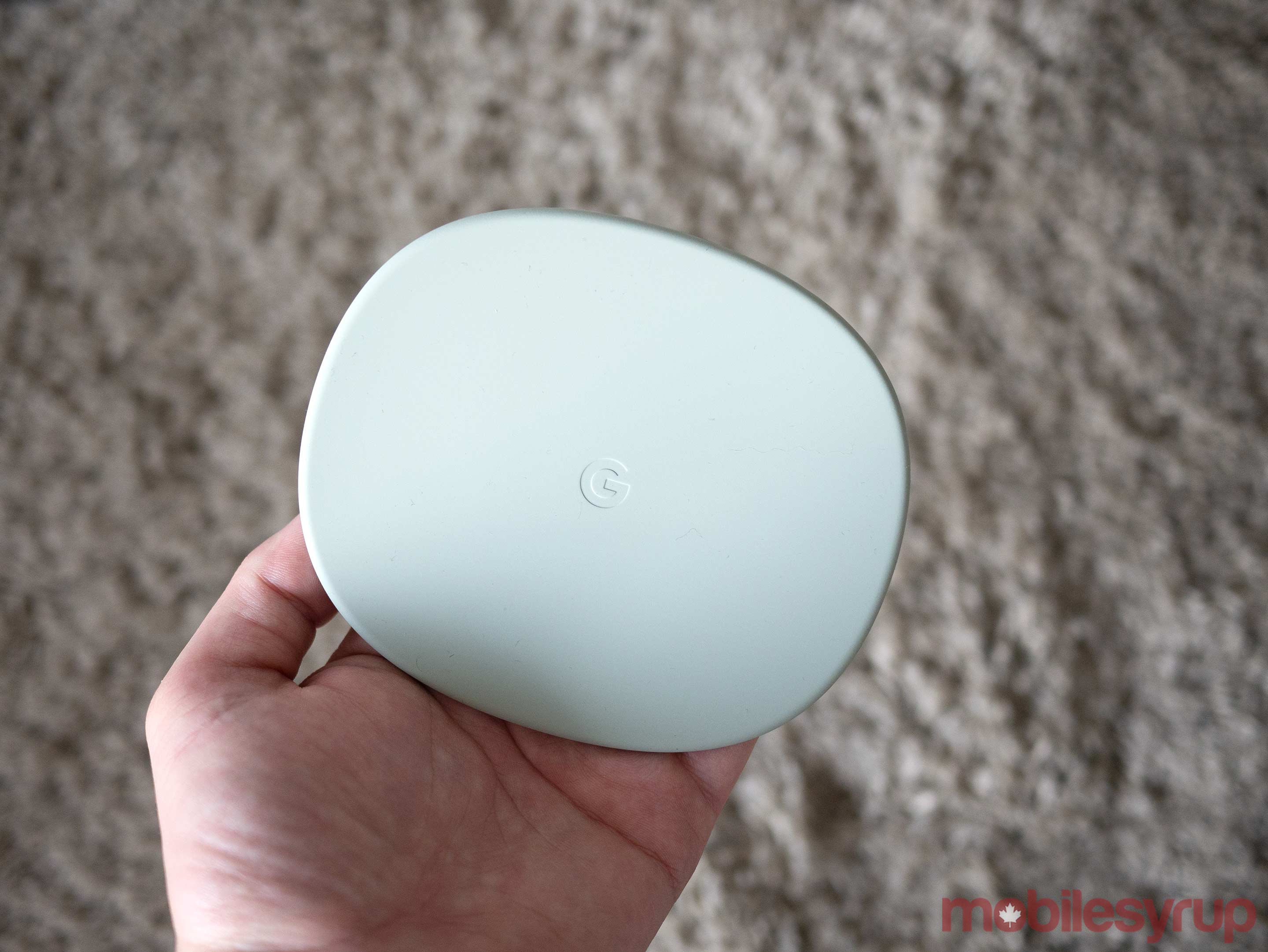 Finally, Google’s Home Max speaker also comes with a magnetic rubber pad that sits under the speaker to help isolate vibrations from the surface you’ve placed it on. This also prevents the Max from damaging wooden surfaces, an issue Apple surprisingly overlooked with the HomePod (which is finally coming to Canada on June 18th).

Unlike other Home devices that include a dedicated ‘Mute’ button, the Max features a touch strip on its top, which switches to the side when the speaker sits vertically. Along with volume control, this strip also allows audio to be paused. In my experience the volume control worked well in most situations, though I also found it finicky in some instances.

The motion of swiping from left to right needs to be performed multiple times in order to raise the volume significantly. Thankfully it’s also possible to increase the speaker’s volume with voice commands, though these need to be repeated as well.

It’s all about that bass

But what about the Max’s audio quality? Overall the Google Home Max sounds great and is a vast improvement over any smart speaker I’ve used, apart from two Sonos One speakers paired for stereo audio (more on this later).

I tested various music genres with the Max and found that it’s most well suited to bass-heavy tracks. With this in mind, don’t expect the Max’s bass to rival a standalone subwoofer. It’s also possible to hike up the Max’s volume levels to a significant decibel before distortion becomes really noticeable.

The Max does a great job of handling highs and lows, with a pleasing mid-range that sounds decent across a variety of genres. For instance, the bass in NWA’s ‘Straight Outta Compton’ was clear and deep, while Hawethorne Heights’ ‘Bad Frequencies’ — a song that despite falling into the post hardcore genre, features a surprising amount of bass in the vocalist’s screaming — also sounded spectacular pumping through the Max. 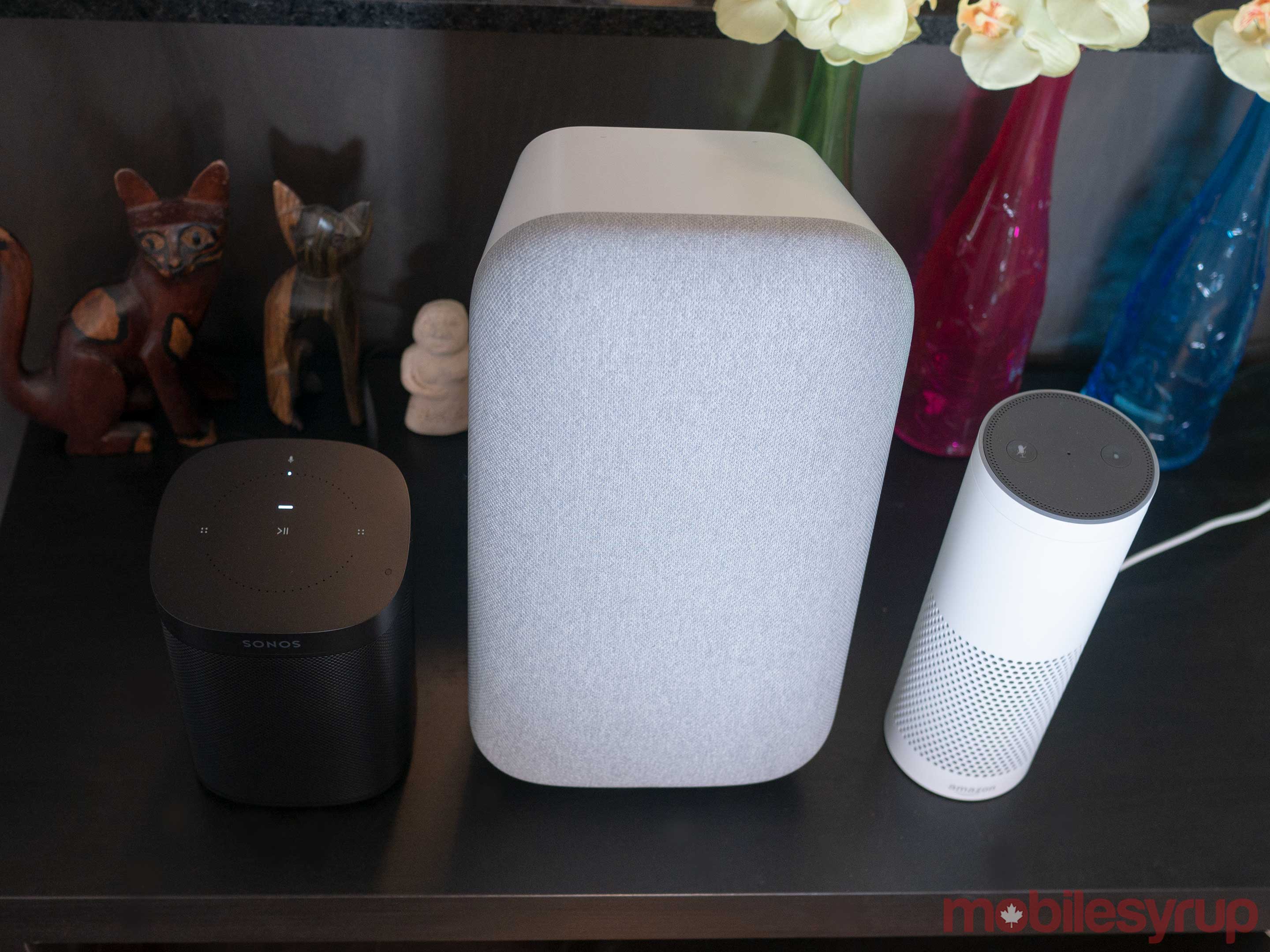 On the lighter side of the spectrum, tracks like Taylor Swift’s ‘Red,’ a song full of what is considered high tones, also sounded crisp and clear.

Essentially, any song I casted to the Max sounded great, regardless of genre, which isn’t something I’ve been able to say about other smart speakers I’ve tested.

The Max is also capable of being set to a stereo configuration if you happen to own an additional Max Speaker, though this isn’t a feature I was able to test out because I only had one review speaker. I did, however, try out the Max with other Home devices by setting up multi-room audio between two Google Home speakers and the Max. This resulted in room-filling audio I found very impressive. 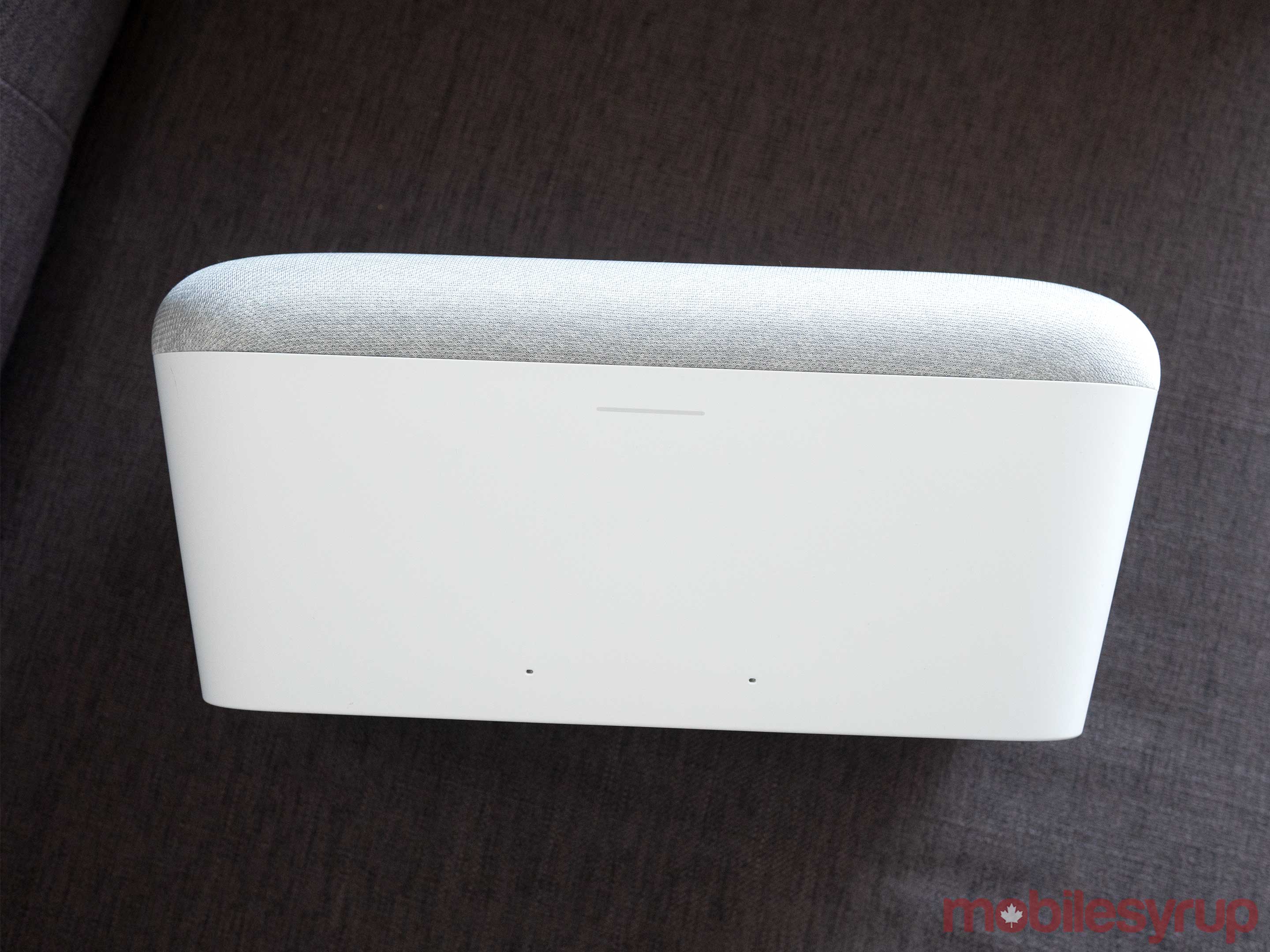 With all this praise in mind, while the Max sounds great on its own, the speaker’s audio quality doesn’t quite match two Sonos One speakers paired together for stereo playback. Sound is clearer and more crisp when emitting out of two Sonos One speakers, though they do lack the Max’s deep bass.

With two Sonos One speakers ($249 each) coming in at the same $499 price as the Google Home Max, this makes opting for Google’s high-end speaker more difficult. 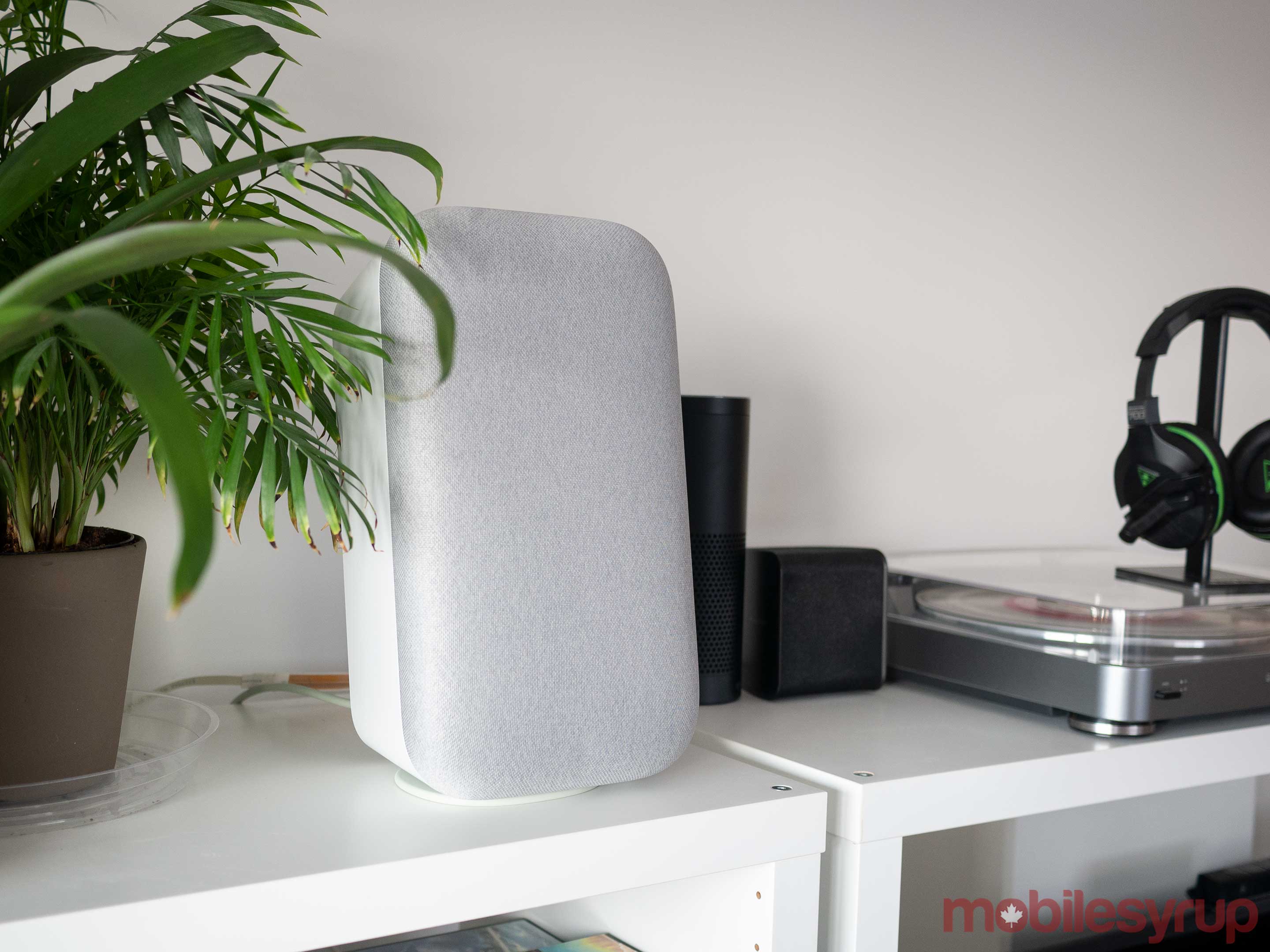 The Max has ability to automatically tune to the room it’s placed in via its built-in microphones and a process Google calls ‘Smart Sound.’ It’s difficult to say how much this adjustment actually affects sound quality since it’s always running and you don’t even really know when the speaker is analyzing its surroundings.

Sonos also offers a similar feature called ‘TruePlay,’ though it requires walking around a room with an iOS device and isn’t compatible with Android smartphones. This process must also be repeated every time you move the Sonos One to a new room.

The Max is compatible with all services that support Google Cast including Spotify and Google Play Music, but unfortunately not Apple Music, given the walled-garden approach Apple has pushed with its music streaming service. It’s also possible to stream music via Bluetooth or through the Max’s rear 3.5mm headphone jack. Though I only tested this feature out a few times with a turntable, sound quality was impressive. 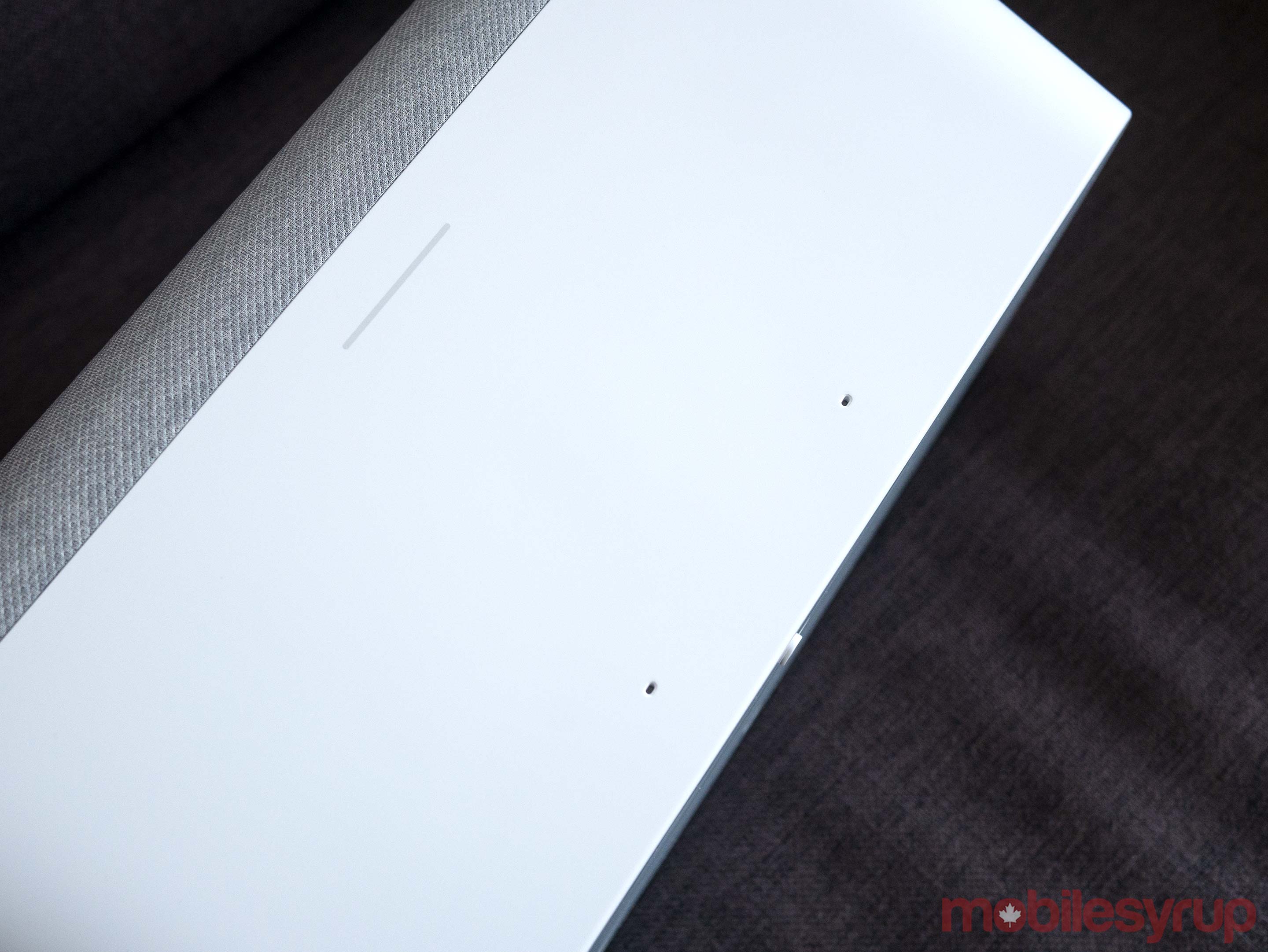 My experience with Google Cast and the Home Max wasn’t without issues though. While Google Play Music playback was solid, songs frequently dropped when I was using Spotify. It’s unclear if this is the fault of my home internet connection and router, or a firmware/hardware problem with the Max.

I haven’t had a problem with the multiple Echo devices I have in my apartment, or even other Google Home speakers. In some cases Spotify worked perfectly with the Max, so it’s unclear what’s causing the issue. Making the situation even more complicated, the audio dropping glitch doesn’t occur when casting to multiple Google Home devices simultaneously.

I reached out to Google Canada regarding the problem and was told that this is a known issue and that a fix was recently pushed out solving it. As of the publication of this review, I’m still occasionally experiencing audio issues when casting from Spotify to the Max. If this problem is resolved, I’ll update this review with additional details. 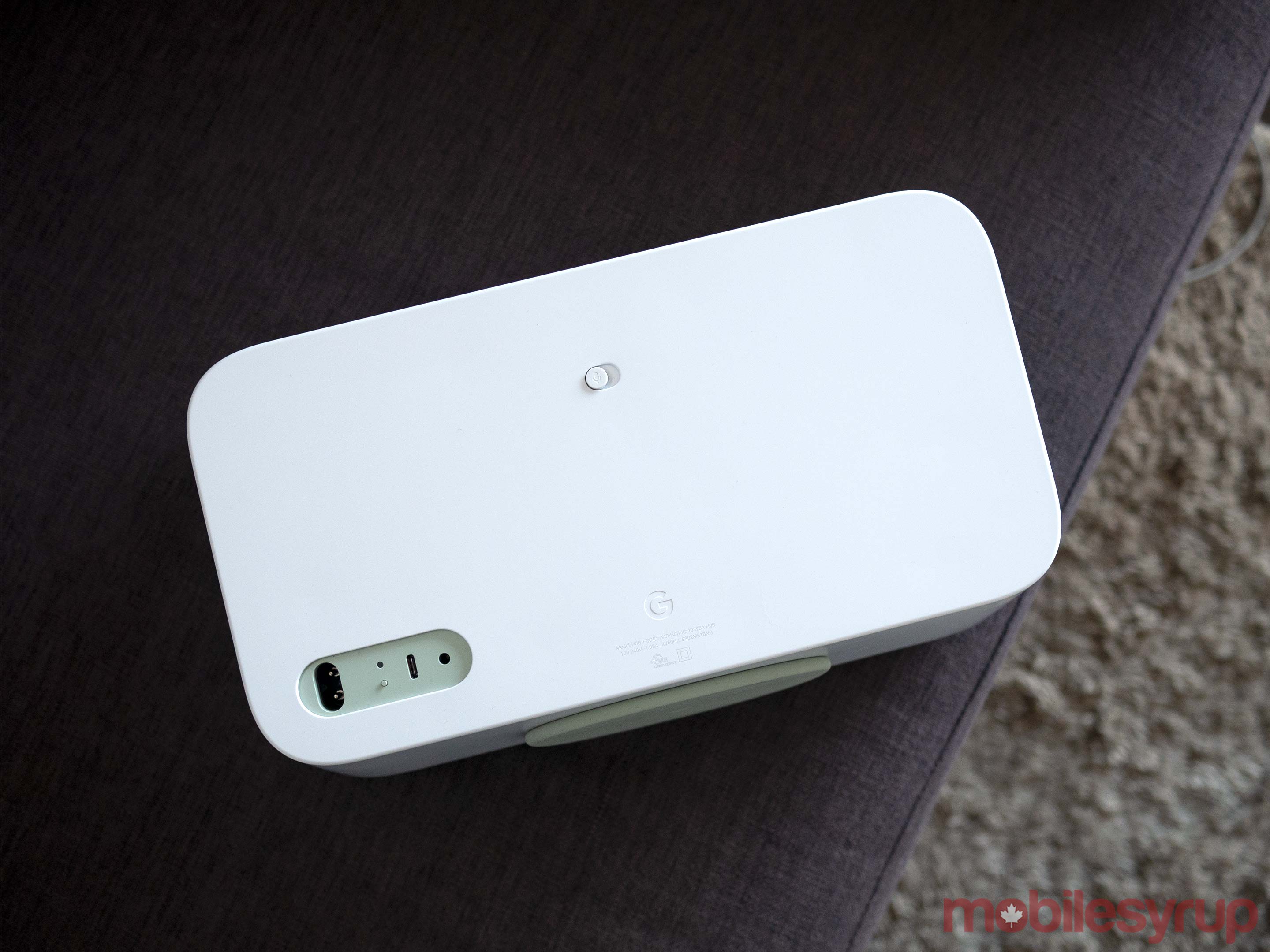 Since the Max is a smart speaker, just like the Home and Mini, it features built-in Google Assistant integration thanks to six far-field microphones that are capable of picking up voice commands from across the room, allowing users to ask random questions, skip tracks, adjust the volume and request music from a specific streaming platform.

Update 04/06/2018: The review has been updated with information related to Apple’s HomePod making its way to Canada.

The Google Home Max is impressive, but given its expensive price tag, as well as the fact that two Sonos One speakers offer similar functionality and slightly better audio quality for roughly the same cost, the high-end smart speaker is a tough sell.

The Max is the best option for Google Play Music subscribers. Further, Google Assistant is also just as capable as ever with the Max. If you're a subscriber to another streaming music service though, it might be worth picking up two Sonos One speakers instead.

For those locked into Apple's ecosystem, there's also the inevitable Canadian launch of the HomePod still looming on the horizon.

Ultimately, the Max will only appeal to a very specific audience wanting a smart speaker that also pushes out high-quality music -- and that aren't afraid to drop $500 on an audio device.

Still, it's hard not to be impressed with how great Google's first effort at a high-end speaker sounds, especially when compared to other manufacturers that have been working in the space for years.

"The Max is the best option for Google Play Music subscribers, as well as for those heavily invested in Google's services and growing product eco-system"