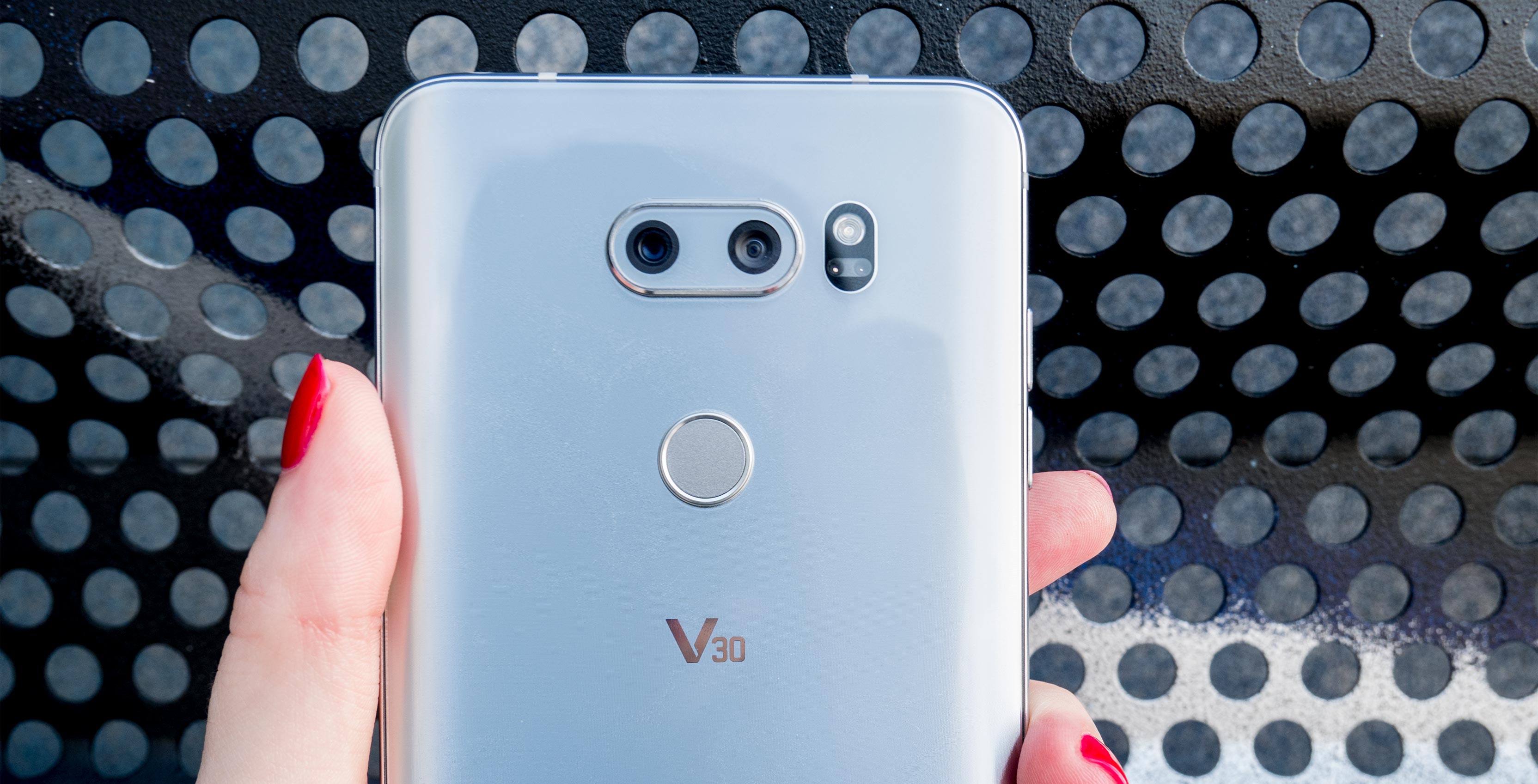 LG is pulling no punches with its latest premium phablet.

After steadily releasing eyebrow-raising tidbits over the course of the last few months, LG has fully revealed the V30 — and the details make clear just how steep the company’s ambitions are for its latest high-end device.

The V30’s powerhouse specs and features — like a f/1.6 aperture rear shooter and stackable biometric security — are inarguably industry leading. In comparison with Samsung’s redemption Note 8, which seemed to play it relatively safe this year, the V30’s distinguishing elements offer a more enticing overall package. It even looks and feels sleeker.

Whether it lives up to its own steadily-building hype is still unclear, however, and can only be accurately verified after spending some time with the market-ready device.

The success of the device also strongly depends on its competition yet to come, the upcoming iPhone and the second generation Google Pixel.

Regardless of external factors, though, the LG V30 has much to be proud of; it shed the clunkiness of the V20, let go of the gimmicky secondary screen and capitalized on its multi-media strengths.

Additionally, with a Snapdragon 835 processor, plastic OLED screen and IP68 water resistance, it features top-end specs that secure its position as a serious contender. The V30’s sleek and elegant style is a departure from its predecessor, the V20, but falls very much inline with the LG G6’s aesthetic, a winning look that’s minimal with subtle flash and soft lines.

Like the G6, the device appears metallic but in fact features a glass back, allowing for wireless charging through both the Qi or PMA standards.

It does, however, feature metal sides. On the left-hand side is a volume rocker, while the top stocks a headphone jack and the bottom a speaker grille, mic hole and USB-C charging slot.

The only other external speaker is situated at the top of the device’s front, embedded in the device’s uber-thin, rounded bezel – the latter of which gives the phone a very different look from the V20, which had larger, blocky bezels. 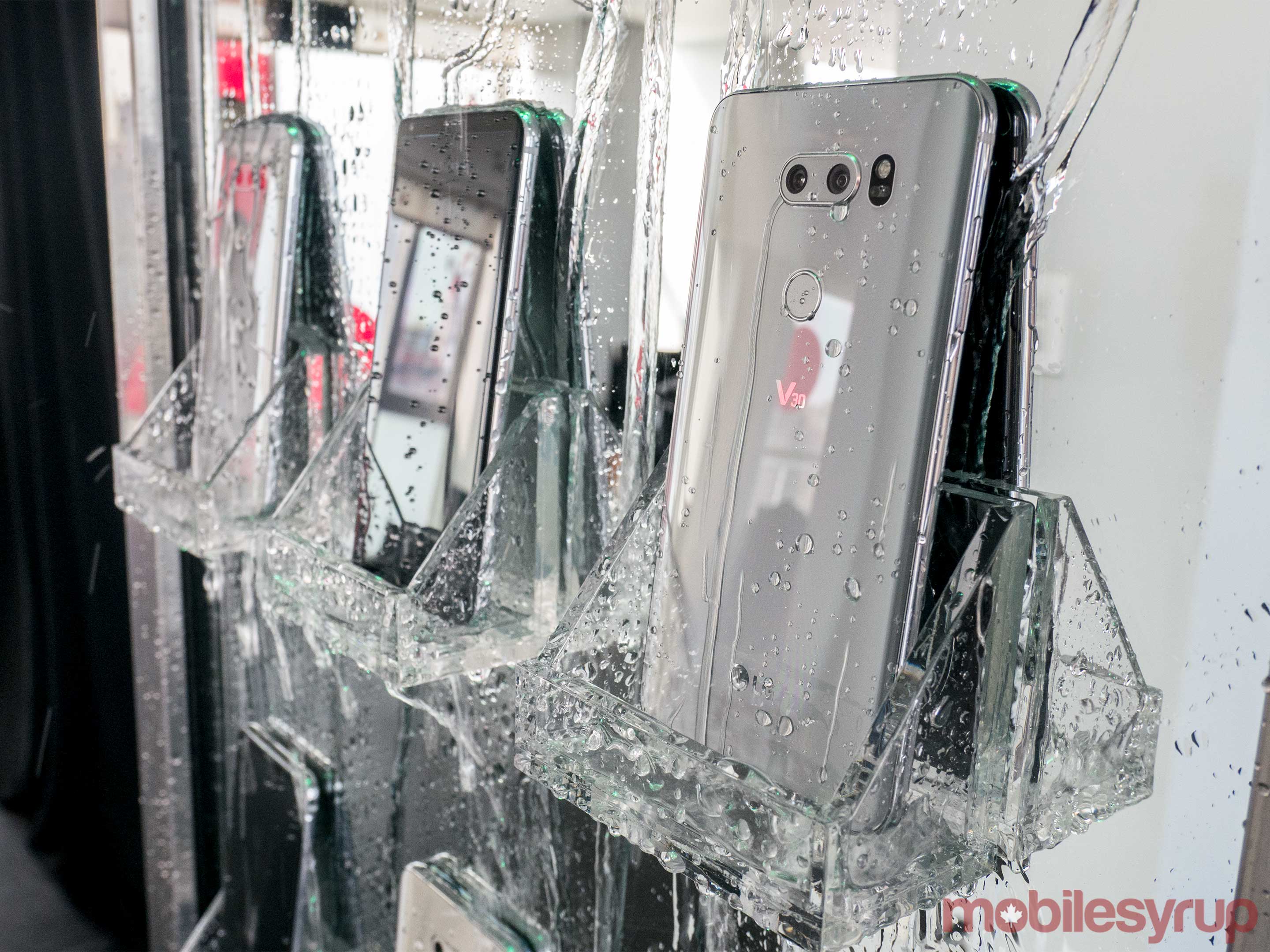 The V30 further deviates from the V20 by decreasing bulk, making it much easier to handle. Whereas the V20 was too large for me to comfortably manipulate with one hand hold and fell on the heavier side of the smartphone spectrum, the V30 is light and easy to grip.

At 158 grams, the handset is lighter not only than the 174-gram V20, but also the G6, the recently-released Essential Phone, the Samsung Galaxy S8+ and the Note 8, which comes in at a paperweight-like 195 grams.

In fact, the V30 is only slightly heavier than the 153-gram OnePlus 5, even though it has a 6-inch screen in comparison to the latter’s 5.5-inch display. The smartphone, which features dimensions of 151.7mm x 75.4mm x 7.3mm, is also the same thickness as the OnePlus 5, and thinner than the rest of its aforementioned competitors. 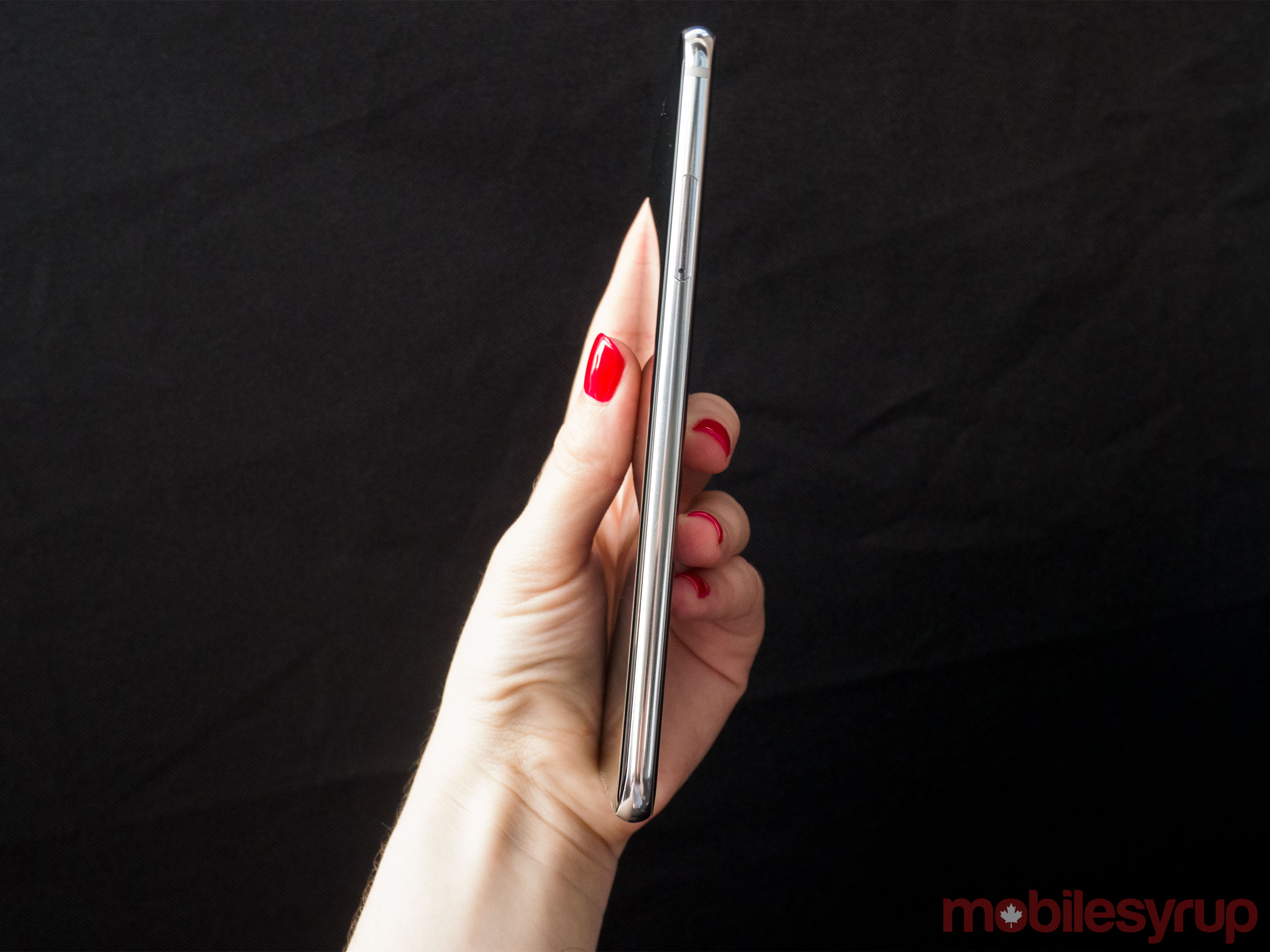 Despite having an 18:9 display aspect ratio, it doesn’t have quite the same tall slimness that now characterizes many high-end Androids, however.

Topping it off, the V30 is rated IP68 for water and dust resistance, which the company demonstrated by placing its phones in a gently flowing water feature during its New York City press briefing.

This marks a departure from last year’s V20, which had a removable backplate and was not water resistant. To some, the fact that users can no longer swap out batteries isn’t worth the added durability, but I think it’s an intelligent trade-off; the public is increasingly demanding water resistance from high-end devices. To most, the fear of water damage outweighs the fear of gradual battery degradation.

Speaking of battery, the V30 stocks a 3,300mAh power cell with Qualcomm Quick Charge 3, which comes in just a little above most predictions. The battery size outpaces the V20 and the Essential Phone and matches the Note 8, OnePlus5 and G6. It’s a bit under the S8+’s 3,500mAh battery, however. 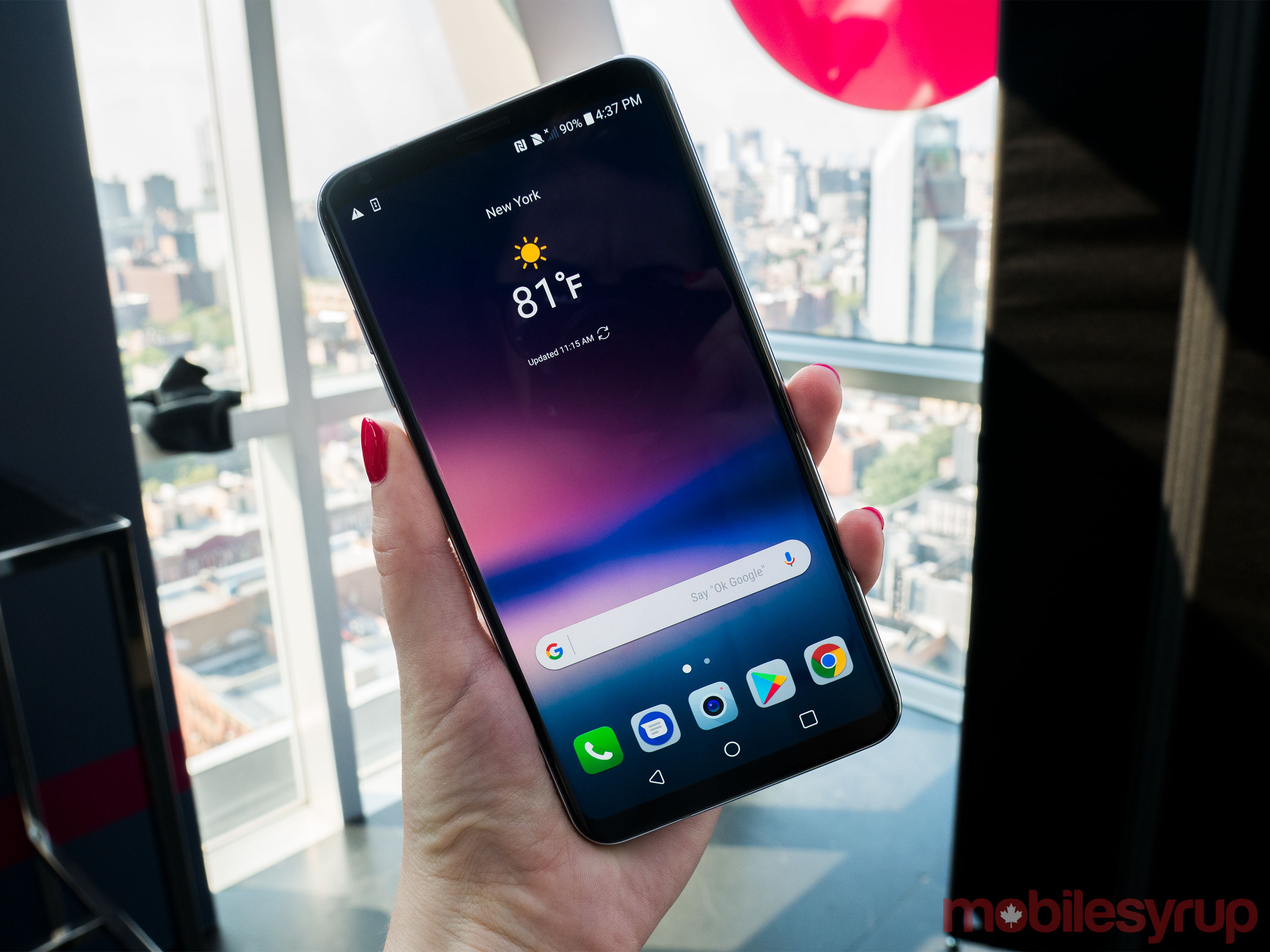 POLED is another notable change for LG, as both the G6 and V20 used IPS LCD displays. The change is at least partially explained by the V30’s Google Daydream certification, since OLED panels offer a lower latency desirable for virtual reality.

In my brief time with the device, I was impressed by the display’s vibrant colours – LG notes that it uses 148 percent of the sRGB colour space for digital images – and its sheer expansiveness. Slim bezels provide a stunning user experience, particularly when it comes to using the camera and watching video.

LG aims to push the viewing experience even further, in fact, by offering different display modes for the type of content being watched, as part of the LG UX 6.0+ Android skin that comes with the V30. It’s also legible in direct sunlight, rectifying an issue I’ve previously encountered with LG phones. 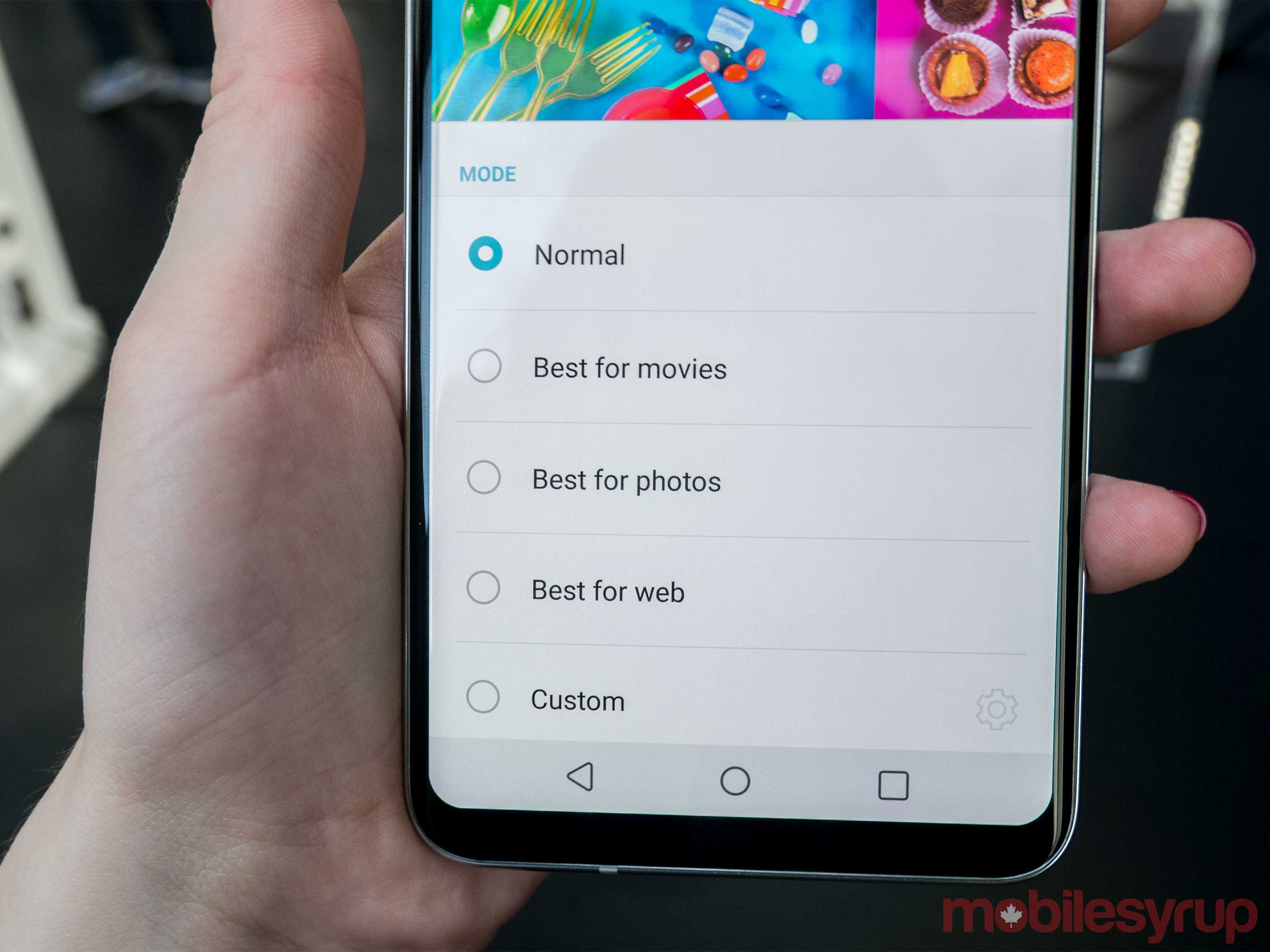 While the smartphone did drop arguably its most distinctive feature from the V20 — the always-on secondary screen that ran along the top of the device and held apps, quick tools and rolling notifications – the V30’s display remains one of its design high-points.

Its 82 percent screen to body ratio is visually arresting, from its size and vibrancy to the taper of its 3D rounded Gorilla Glass 5. During my time with it, I found it one of the most gorgeous displays I’ve ever seen on a smartphone. 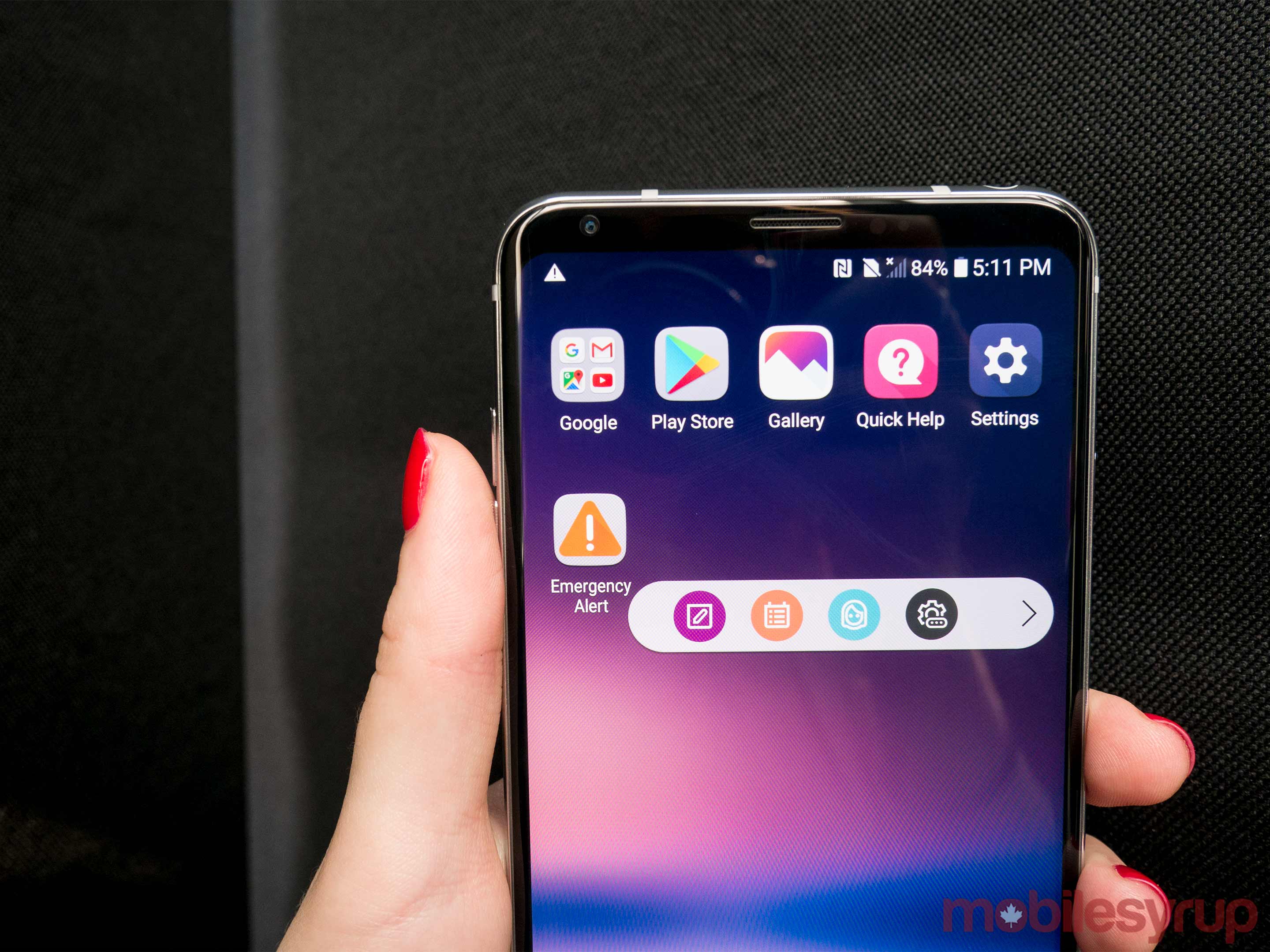 LG’s new 6.0+ skin — which runs over the slightly outdated Android version Nougat 7.1.2 — is still far from stock Android, eschewing pleasantly familiar features like the Pixel Launcher and Google Now positioned next to the home screen.

However, I’ve never been more intrigued by its additional software offerings, many of which seem to really complement Android offerings.

For instance, there’s the new option to use facial and voice recognition to unlock your phone, which the company notes you can use in addition to the fingerprint sensor – there’s no need to choose between the three. I wasn’t able to fully check out this feature, but it’ll be exceedingly useful if implemented well.

LG also notes that since its user voice recognition is enhanced, Google Assistant will be easier to use. There are even some V30-specific commands, including: “Record a video/take a selfie in wide angle,” and “Open camera in manual mode.” As for the floating bar that replaced the secondary screen, it offers plenty of functions and is thoughtfully designed for what could be a potentially annoying feature. After enabling the bar, you can drag it anywhere you’d like on the screen or minimize it and shift the small tab to any position on either edge.

The always-on display feature, meanwhile, has shifted downward to the now singular main display — a position I like better for its larger size in comparison to the secondary screen — and is customizable with quick tools and photographs, among other things. 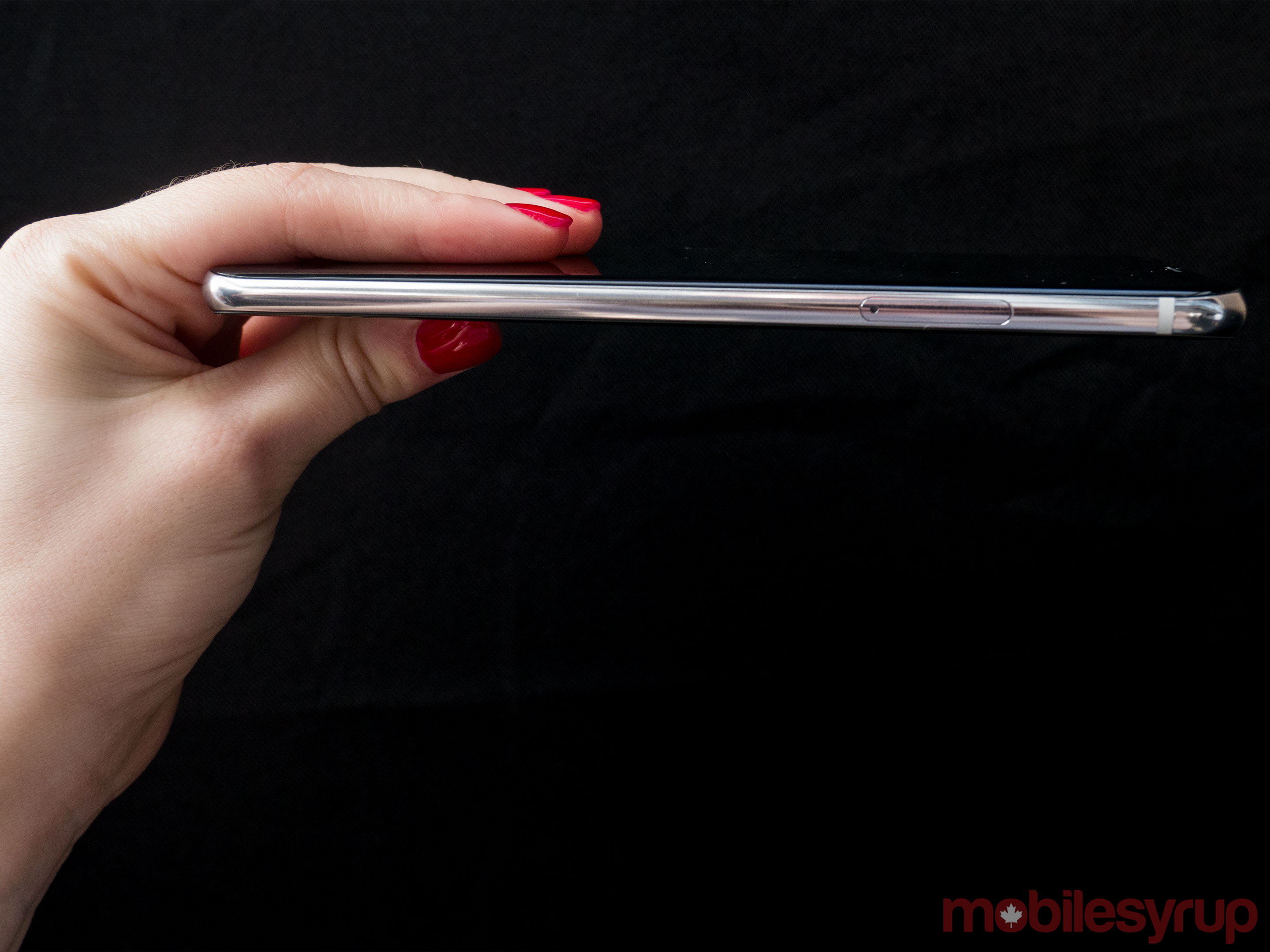 Unlike the LG G6, which caught flack for stocking a slightly outdated Qualcomm chipset — the Snapdragon 821 — the V30 has Qualcomm’s current flagship platform, the octa-core Snapdragon 835. This puts it on par with the Note 8, S8+ OnePlus 5 and Essential, though many of its competitors have more impressive memory configurations.

The device hummed along perfectly during my time with it, though further use is necessary before passing any judgments.

Camera specs that stand out 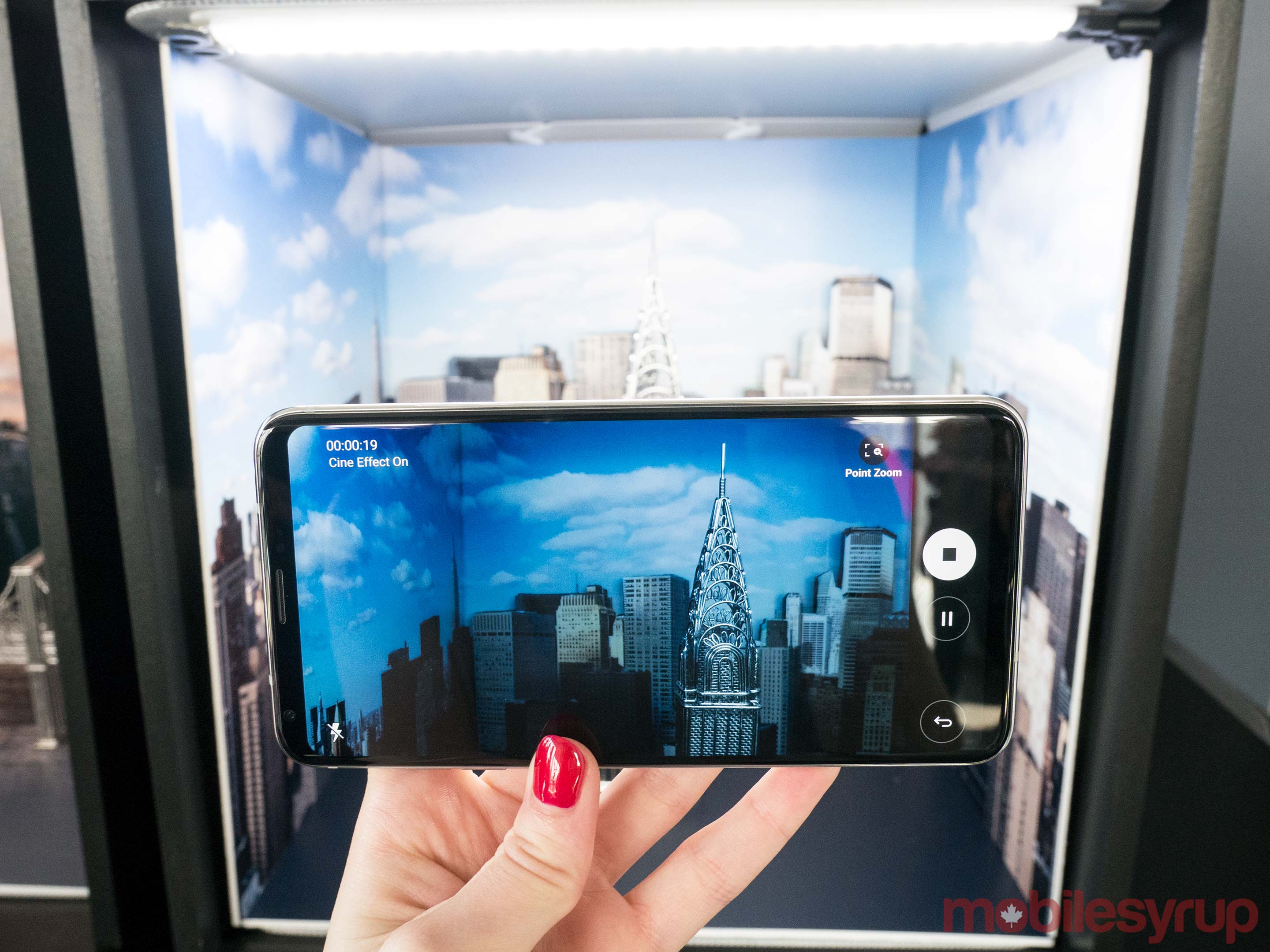 At the heart of the V30 is its camera setup, and LG has cut no corners in making it a compelling package.

Additionally, LG touted its new ‘Crystal Clear Lens’ – the difference from other setups being that the camera’s sixth and final layer of lens is glass, which benefits light collection and supposedly helps with better colour reproduction. 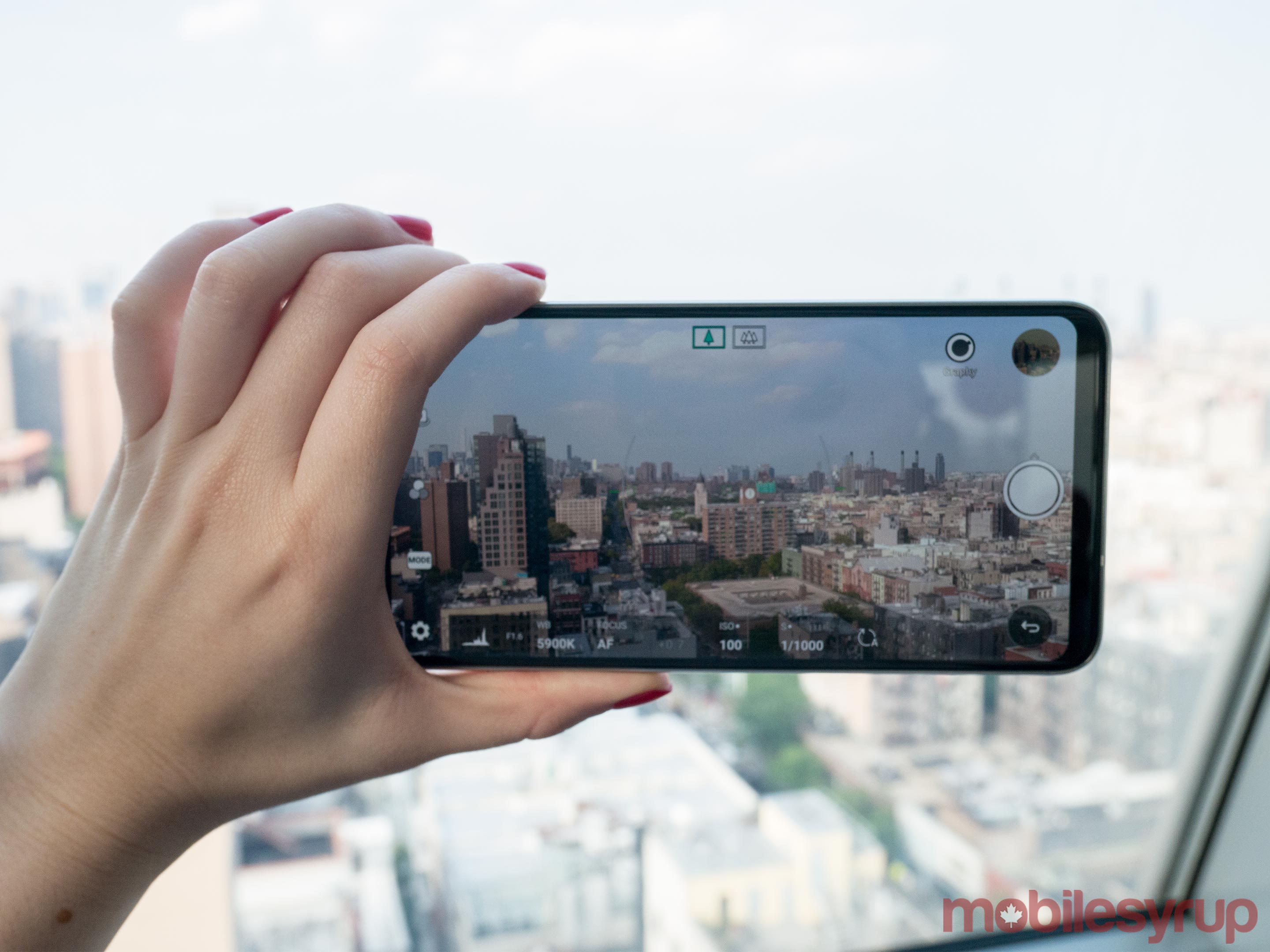 A lack of vibrancy and saturation was one of the main issues I’ve had with LG’s cameras in the past, so it’s compelling to see the company striving hard to improve. The pictures I snapped during my hands-on did indeed look richly coloured, though I wasn’t able to take any shots that showed its low-light capabilities well.

One thing I could tell, however, was the company’s improvement of wide-angle shots. LG promised it had reduced edge distortion and, indeed, the photos I snapped lacked most of the fish-eye effect that detracted from wide-angle shots taken by the V20.

Additionally, LG’s UX 6.0+ added some very engaging photo software. Even though I’m not usually one to dabble in all of a camera’s different modes, I found myself loving the ‘Cine Video’ effects, which allow for noir lighting in the middle of the day, or a variety of other colourized themes.

Another feature, ‘Point Zoom’ allows users to identify a target in a video and zoom smoothly towards it at a controllable speed — perfect for comedic effect.

‘Graphy’ was also interesting, letting users import manual camera settings from mobile pictures taken by pros — though the settings seemed to require ideal matching lighting to that shown in the pictures, or the results came out underwhelming.

Around the front is a 90-degree 5-megapixel selfie camera with a f/2.2 aperture that shot well and features LG’s handy fist trigger function for super-casual looking self-portraits. 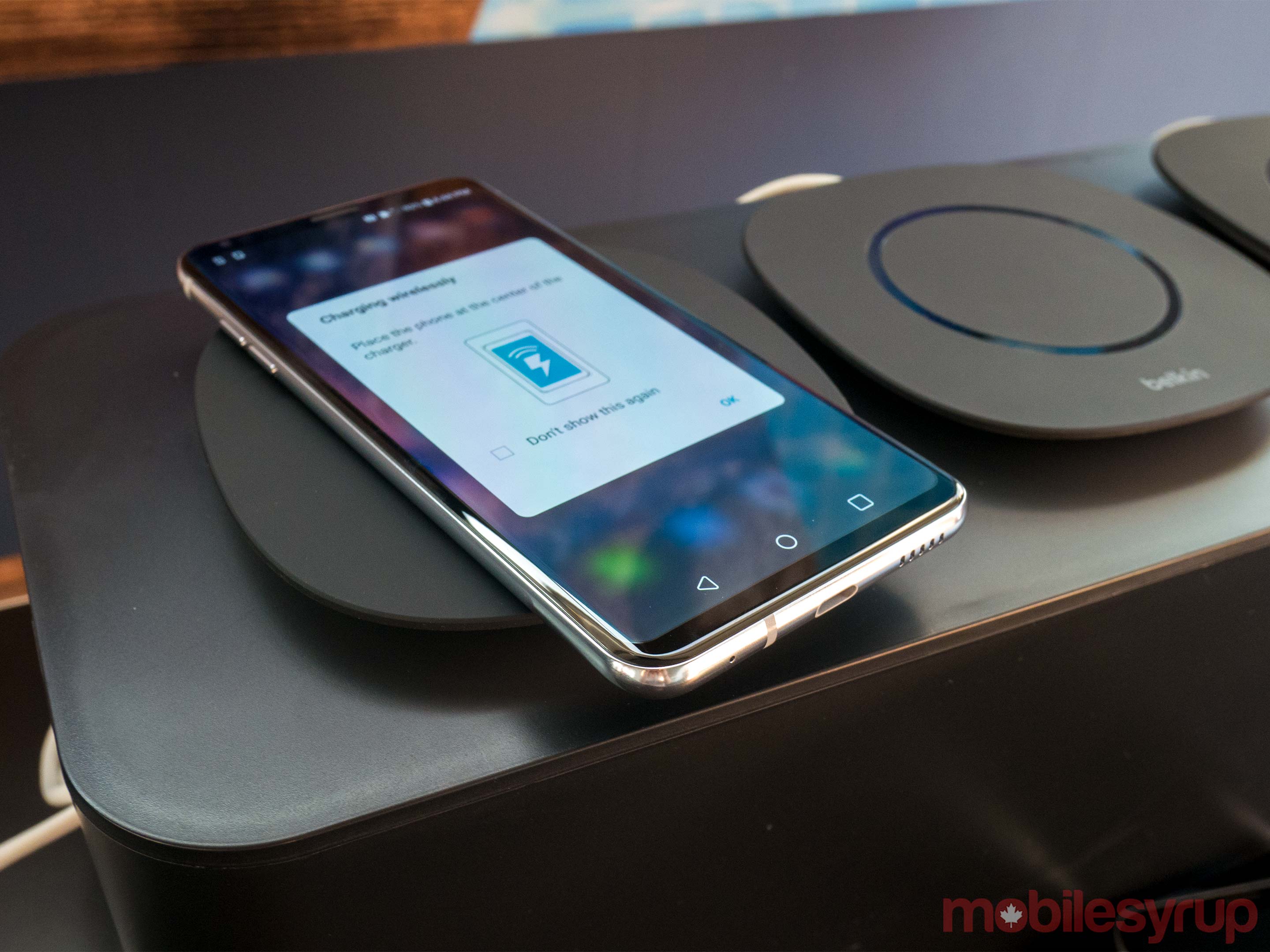 The LG V20 and V10 were both known for their audio prowess, and the V30 aims to remain one of the best audio experiences in the high-end smartphone market.

The V30 will include the same high-fidelity (Hi-Fi) Quad digital to analog converter (DAC) that was first introduced with the V20, with a few key upgrades. The handset contains a 32-bit Advanced Hi-Fi Quad DAC powered by ESS Technology’s SABRE ES9218P, and brings along two new features: digital filters and sound presets.

Both allow for more customization of sound. Digital filters, say LG, improve ‘pre- and post-ringing of the impulse’ response with customizable filters. Additionally, LG created four pre-programmed settings for audio: enhanced, detailed, live and bass – which can be used depending on the user’s preference.

In testing out the V30’s sound, I found it to be crisply detailed, with each instrument in the trial song sounding unique and unmerged with the others.

With more flagships yet to come and many features to test further, it’s difficult to say whether the V30 will turn into a hit for the company – but at first glance, the phone’s extensive laundry list of high-end specs and unique features make it a serious contender in the market.

Update 01/09/17: LG has updated MobileSyrup that “due to licensing restrictions, LG Canada will not be offering B&O headphones with the LG V30.” The article has been updated to reflect that fact.