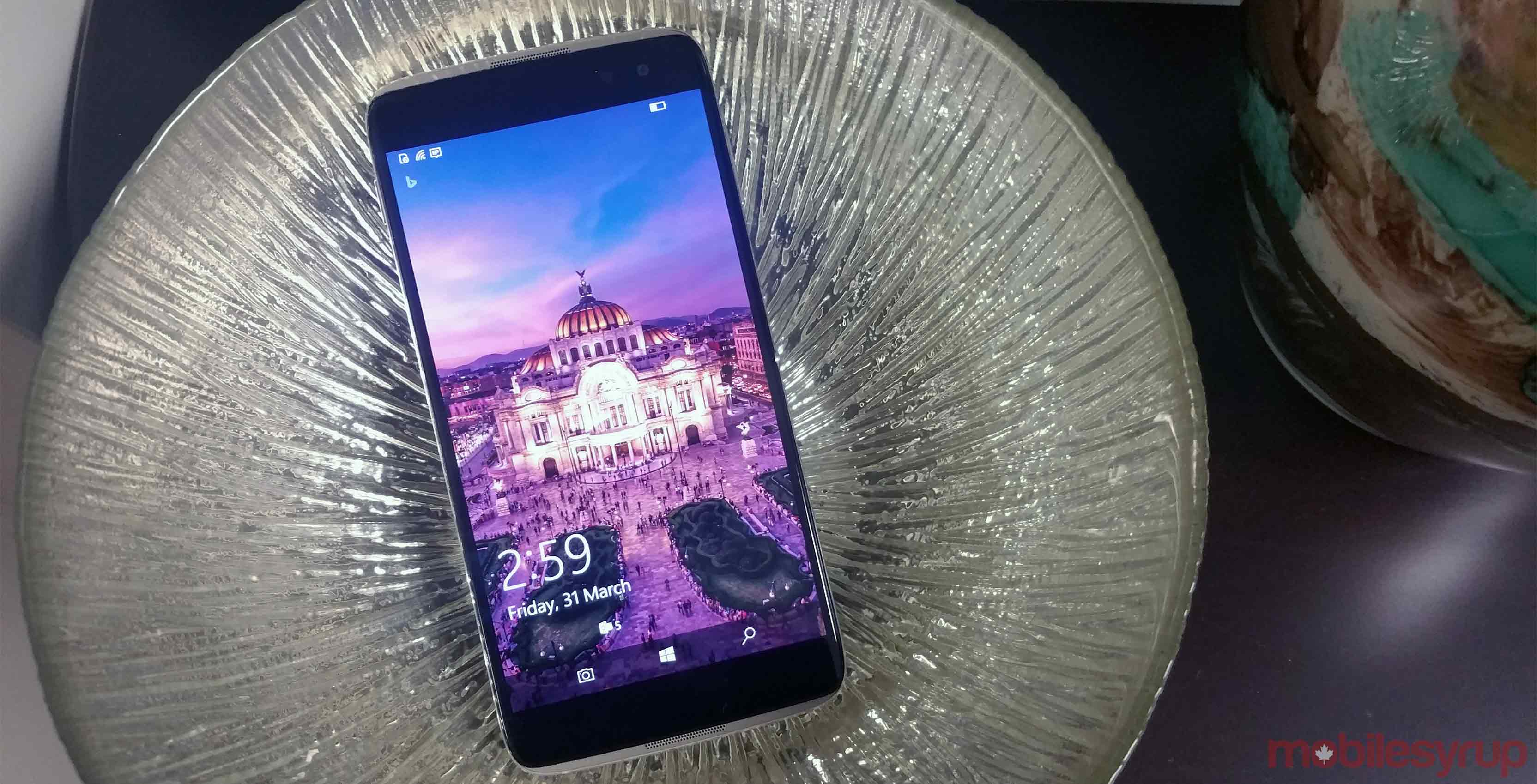 It is hard to believe that anyone could be convinced to switch from Android or iOS to Windows 10 Mobile these days. Yet, in the two months I spent testing the Alcatel Idol 4S Windows 10 variant, it almost did enough to make me reconsider Microsoft’s struggling operating system.

Regardless of whether it’s running Windows 10 or Android, there is a lot to like about this phone. With its ever-so-slightly curved edges, glass front and back, and gold-tinted metal trim, it looks and feels like a premium phone. 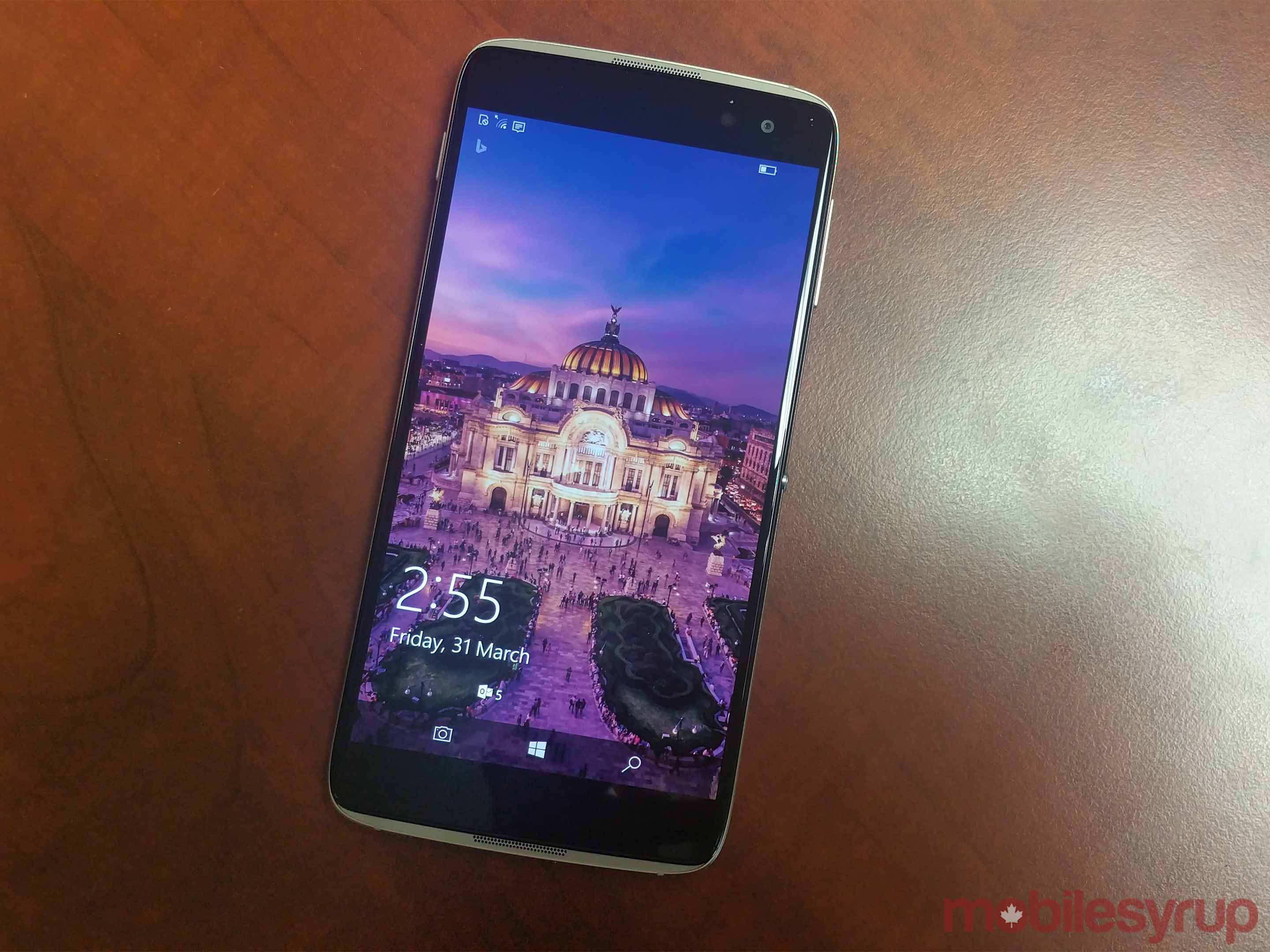 That’s commendable considering that in Canada the Windows version is currently priced at a little over half of what Apple is selling the cheapest iPhone 7 Plus for, $619 unlocked in the Canadian Microsoft Store.

Complementing this aesthetic appeal are two features that would make me reach for the Idol 4S before my regular phone. Firstly, it has two speakers on the front. That means you don’t have to place the Idol 4S face down to avoid muting a rear-facing speaker. Consequently, you can actually see the album art while a song is playing. Moreover, the speakers are surprisingly loud when you pump up the volume. It might not do for a backyard rave but you can easily hear it over the revving of a food processor.

This phone’s other great asset becomes apparent when you switch it on. Every phone maker uses superlatives like “beautiful” to describe their device’s display. In this case, it’s not hyperbole. The Full HD screen resolution of the Idol 4S with Windows 10 might sound subpar.

Forget the marketing hype around battery-sucking Quad HD screens, though, because this phone proves that pixels per inch isn’t necessarily the most important metric when it comes to display quality. The colour reproduction on the AMOLED screen is as vibrant as anything I’ve seen on high-end phones. When compared side-by-side with HP’s Elite X3, it made that phone’s colours look distinctly muted. 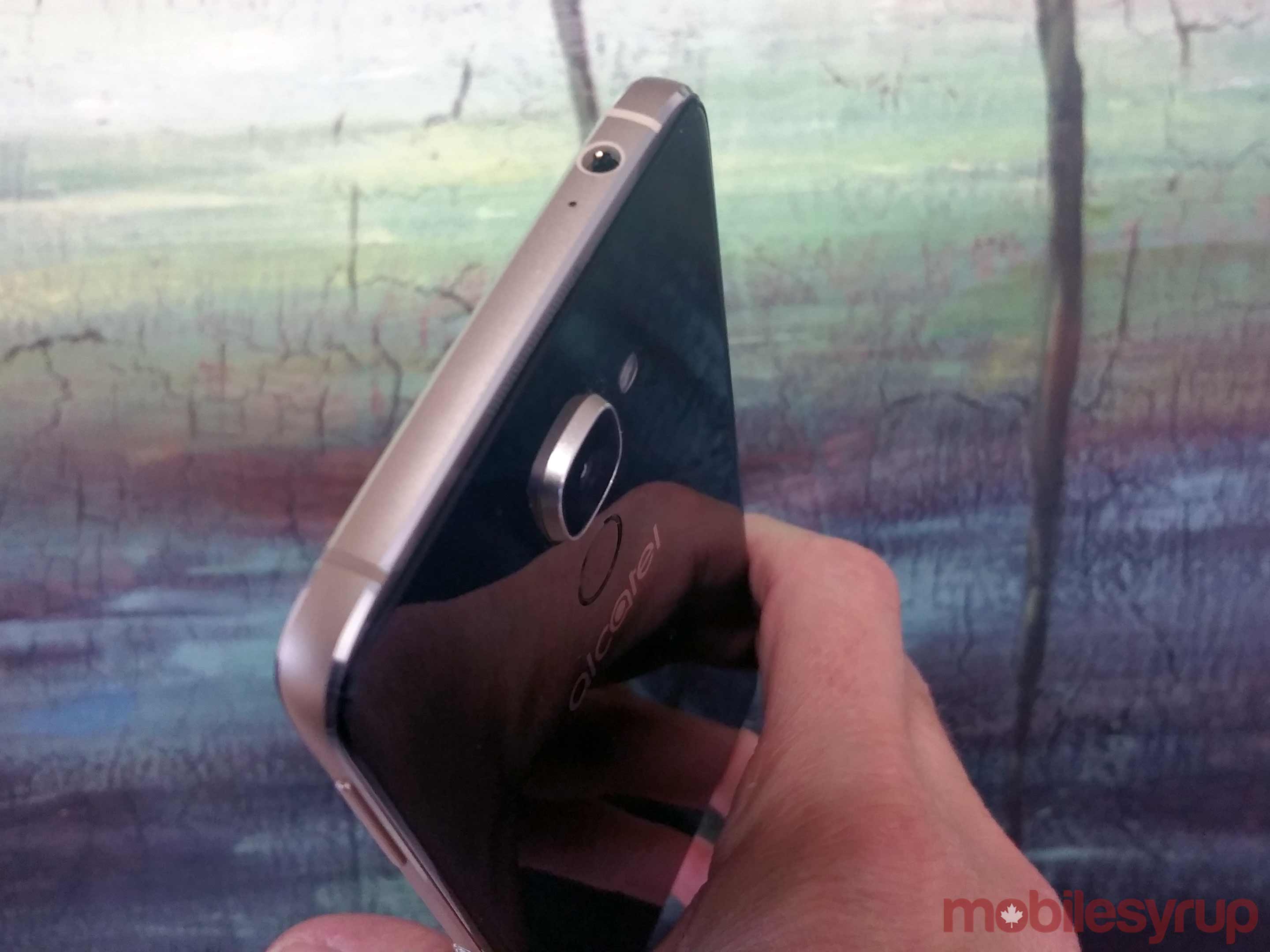 In addition to these pros, there are a couple of features including in the Idol 4S that are unusual. One is the camera shutter button, which is placed about halfway down one side. In that position, it can be pressed using your phone hand or free hand. Tapping it brings up the camera app or activates the shutter if that app is already open.

The second feature is less practical: the USB-C charging socket is offset on the bottom of the phone so it won’t work with most charging stands. This would be less of an issue if the Idol 4S had wireless charging but it doesn’t. It’s 3,000mAh battery does charge quickly with the included cable, however, and easily got me through a day with normal use. 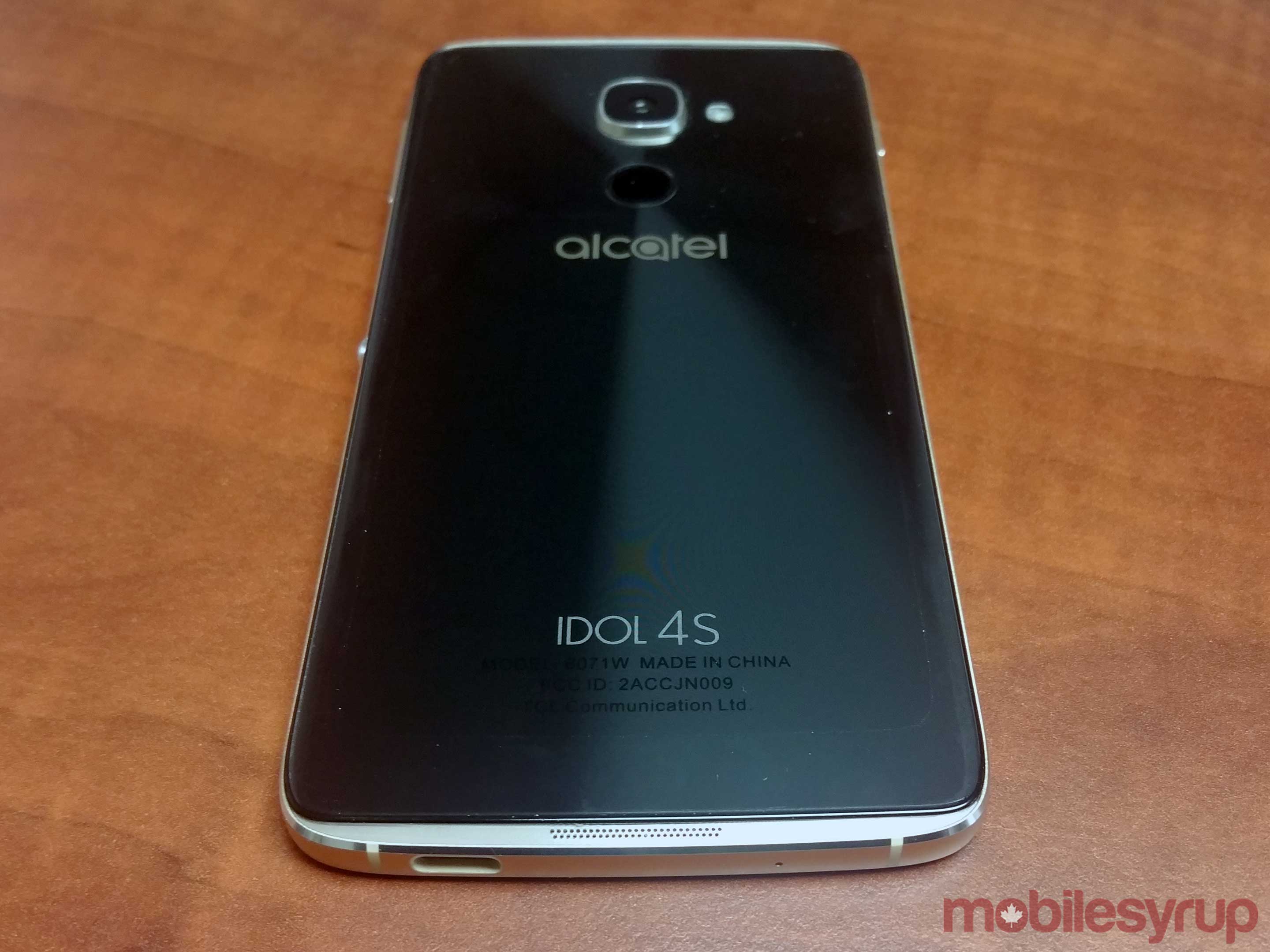 Most of the other specifications for the Idol 4S with Windows 10 are what you would expect on a top phone. The display is 5.5 inches across — the same size as the screen on a Pixel XL — with a thin bezel on each side. The Idol 4S is also slightly smaller all round than Google’s phablet and lighter. Inside, its Snapdragon 820 processor isn’t the most up-to-date CPU either, though it’s still competent.

Nonetheless, the phone handled every task I asked of it without a hitch, including Microsoft’s Continuum platform. The Windows version comes with 4GB of RAM (although it only stated 3.5GB under Device Information on my sample unit) and 64GB of storage space. The latter can be expanded with a 128GB microSD card. If you are upgrading from a Lumia 640, therefore, the Idol 4S is going to feel liberating. 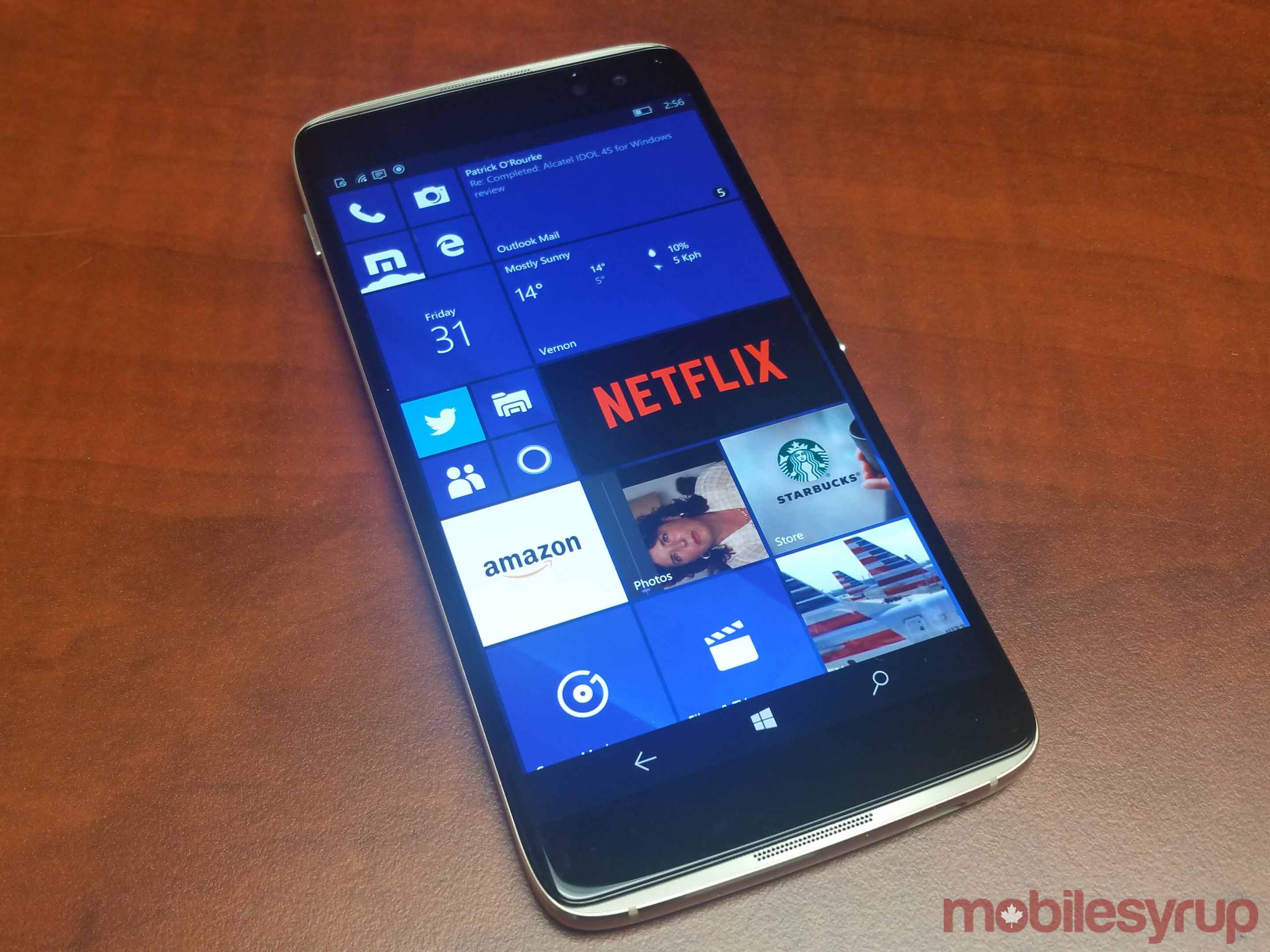 One area where the specs are underwhelming is the phone’s cameras. According to the description on Microsoft’s Canadian online store, the main camera records videos at only 720p, which now feels like an old standard. Videos can be taken at 1080p with the front-facing camera but that’s hardly convenient unless you want a high-res selfie.

The main camera also has an impressive 21-megapixel image resolution but pictures I took in daylight and artificial light were not noticeably sharper or richer in colour than those from my old Galaxy Note 4. 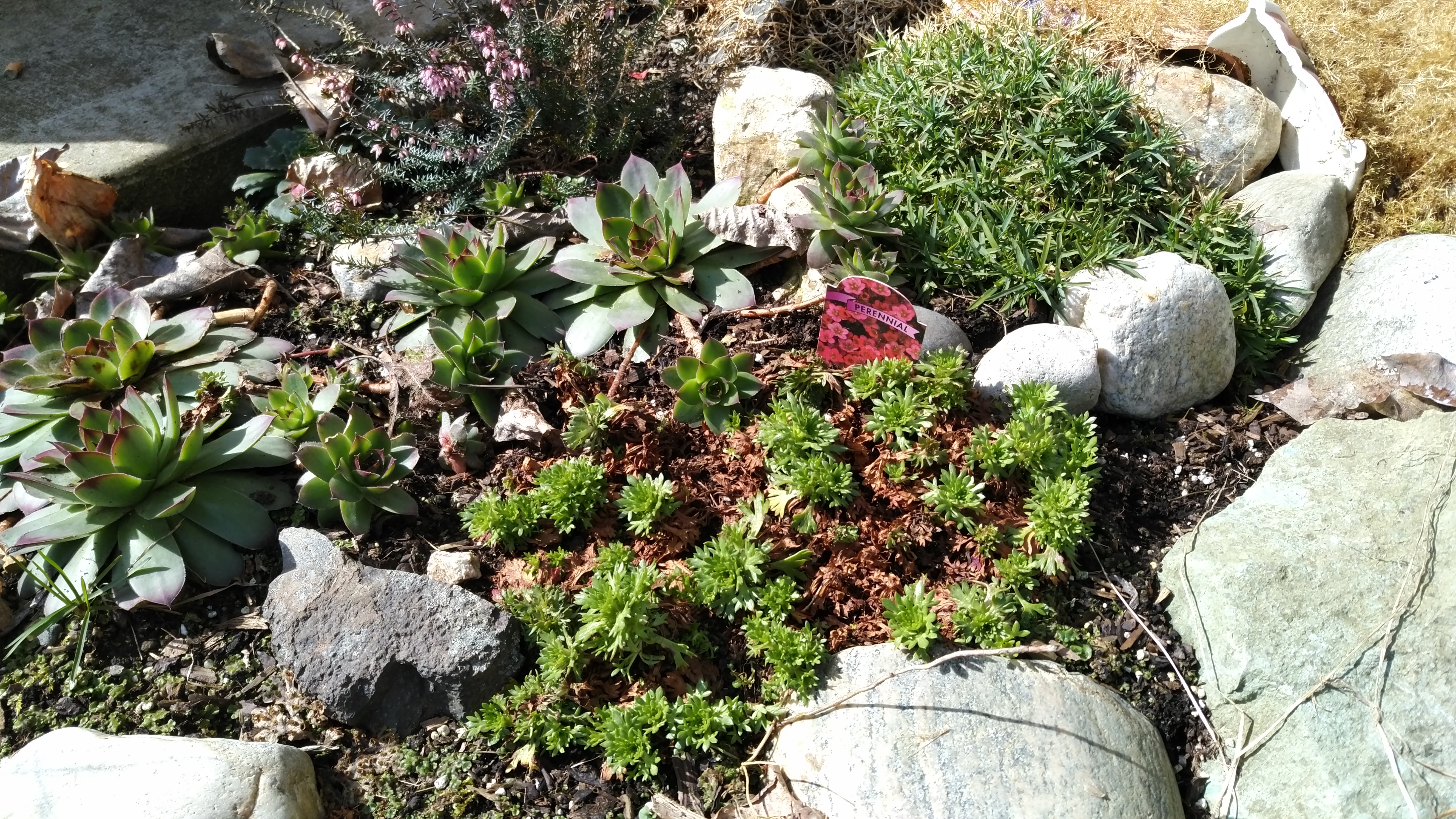 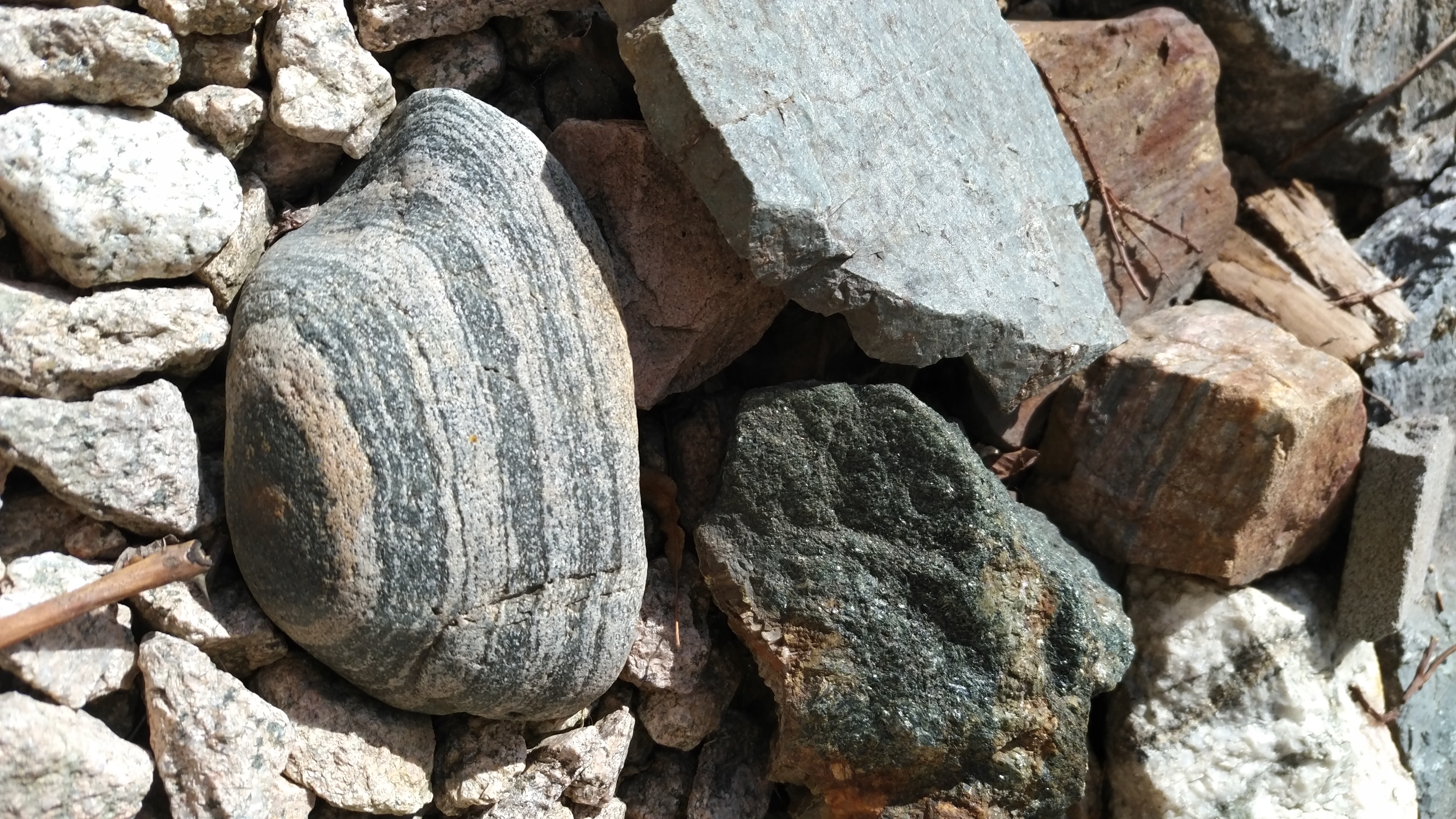 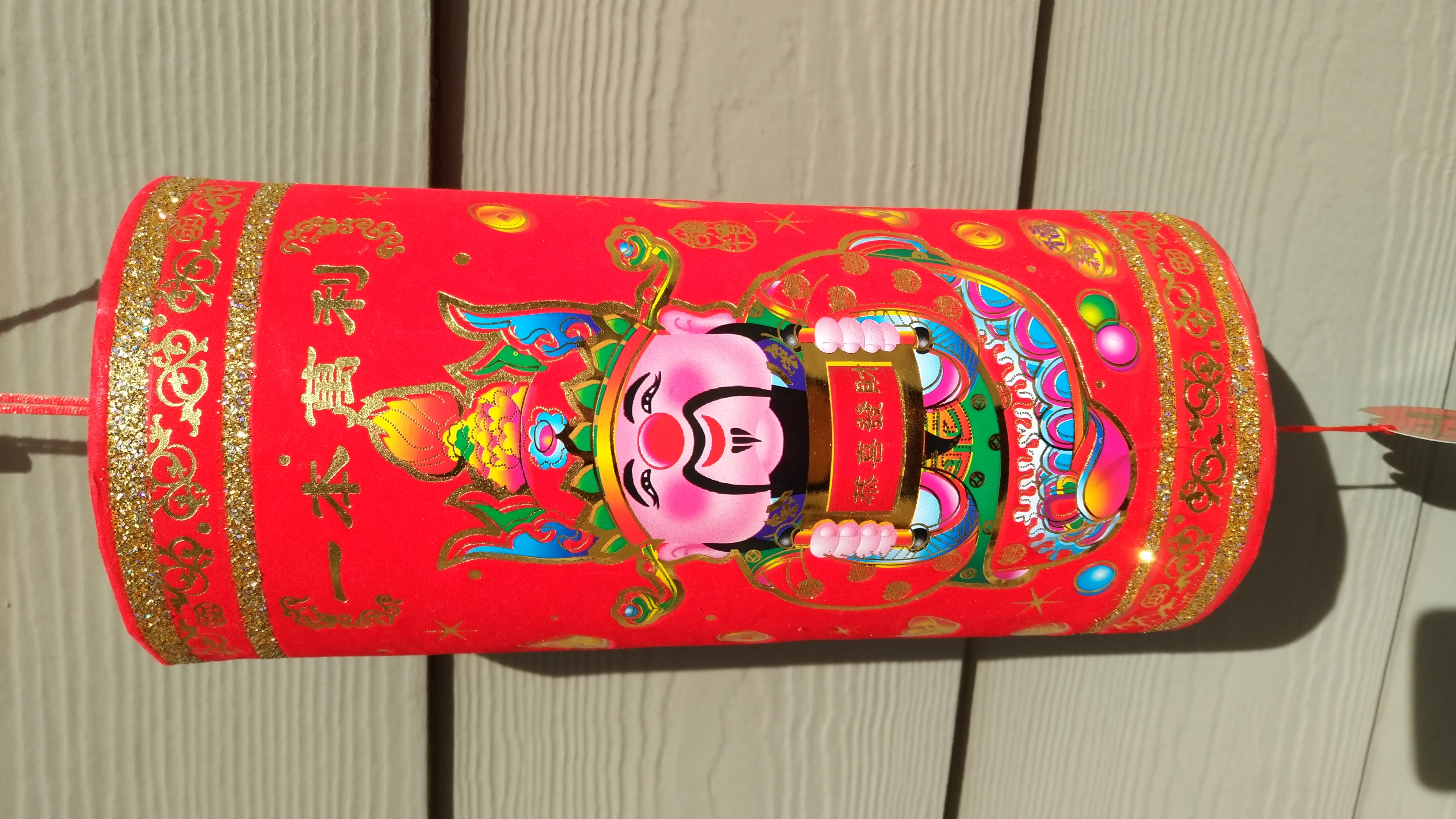 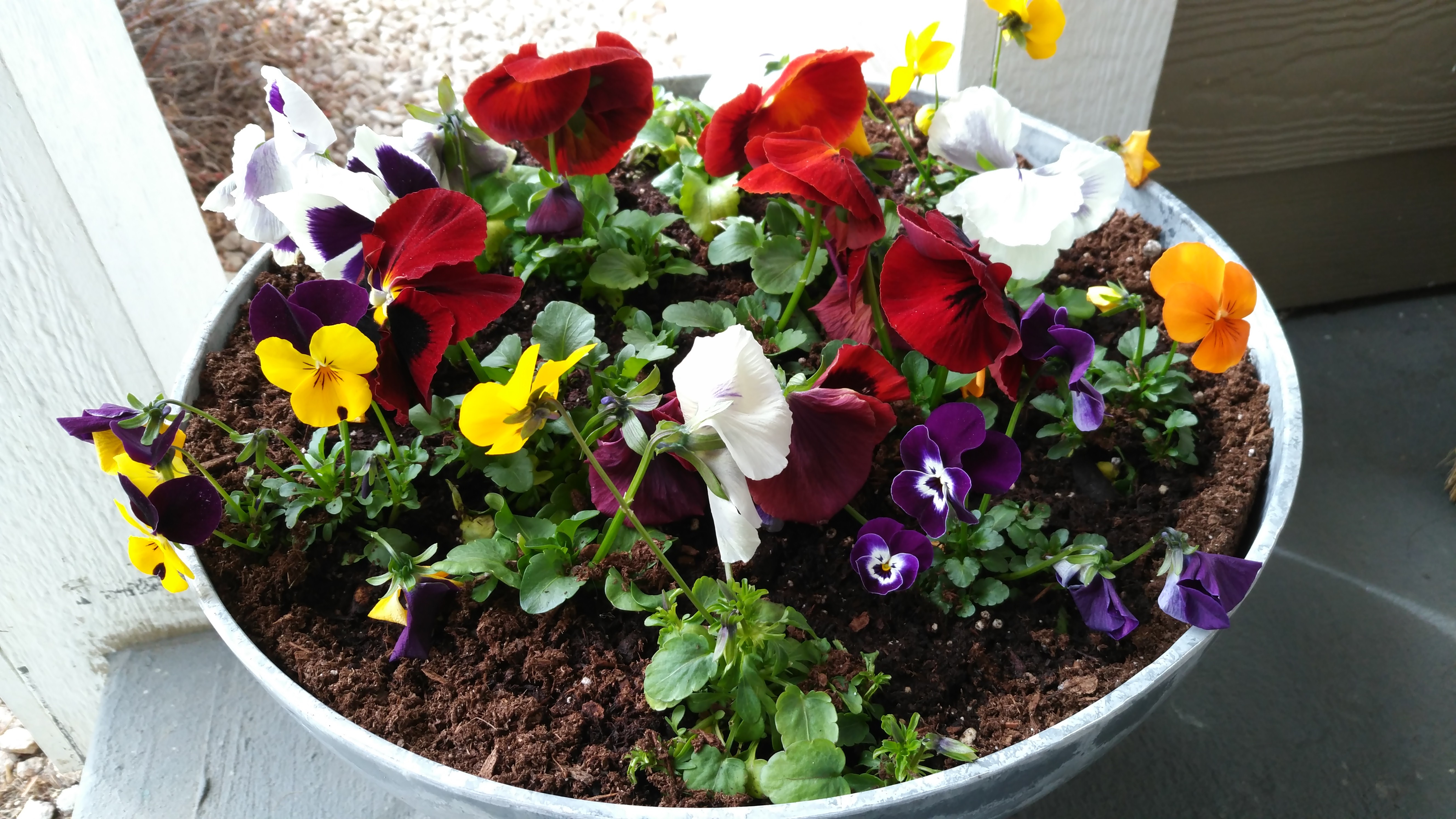 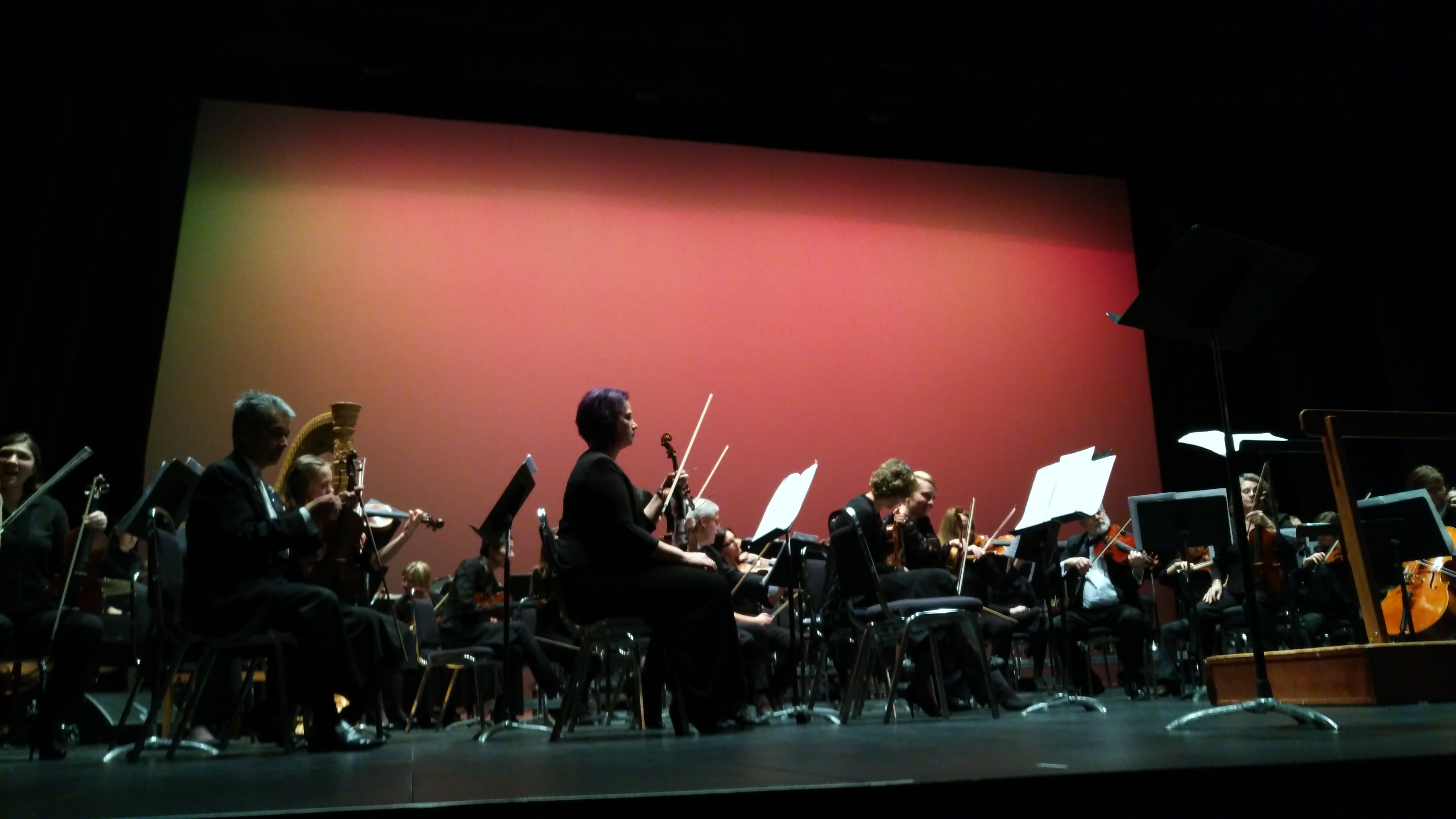 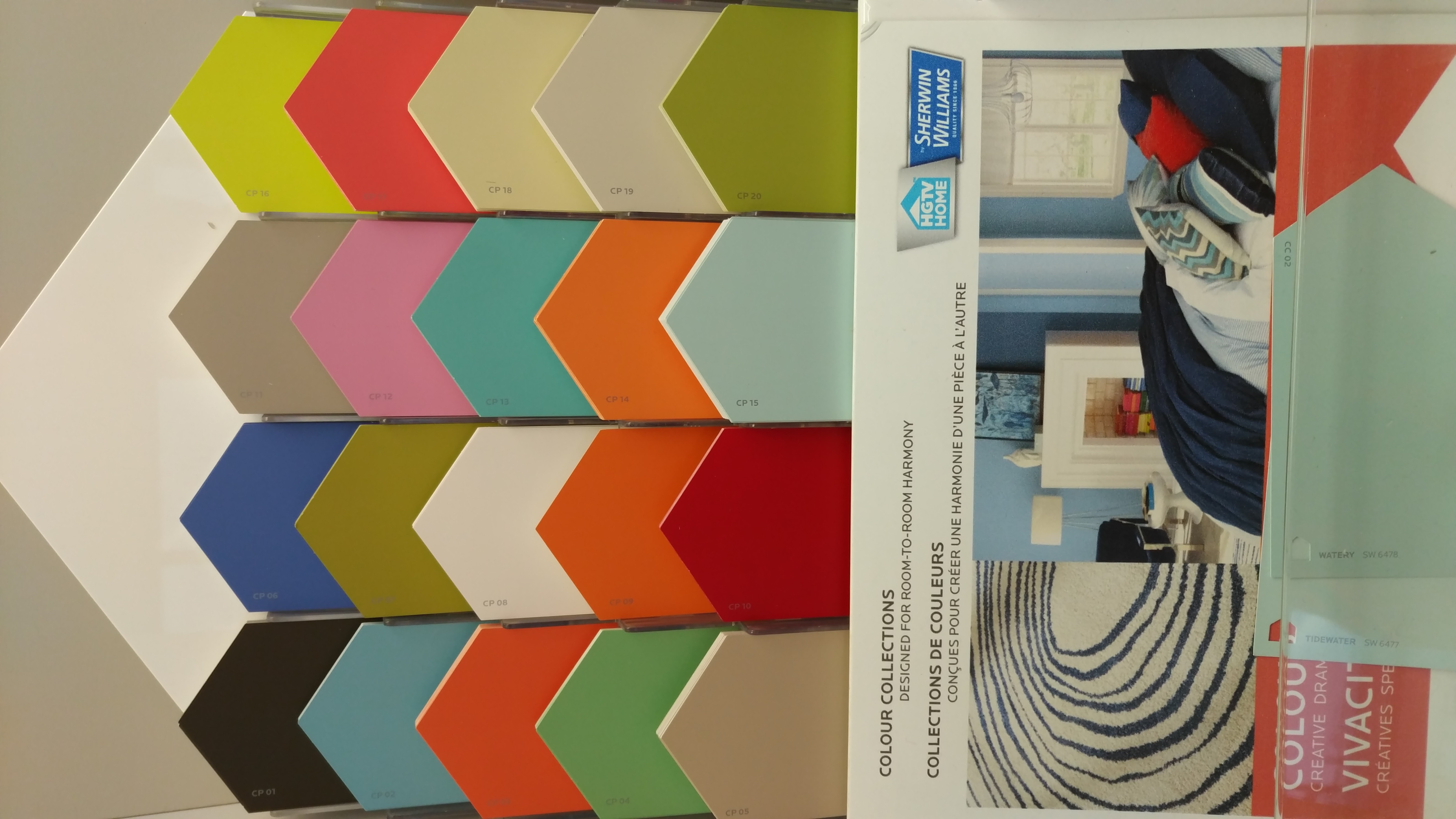 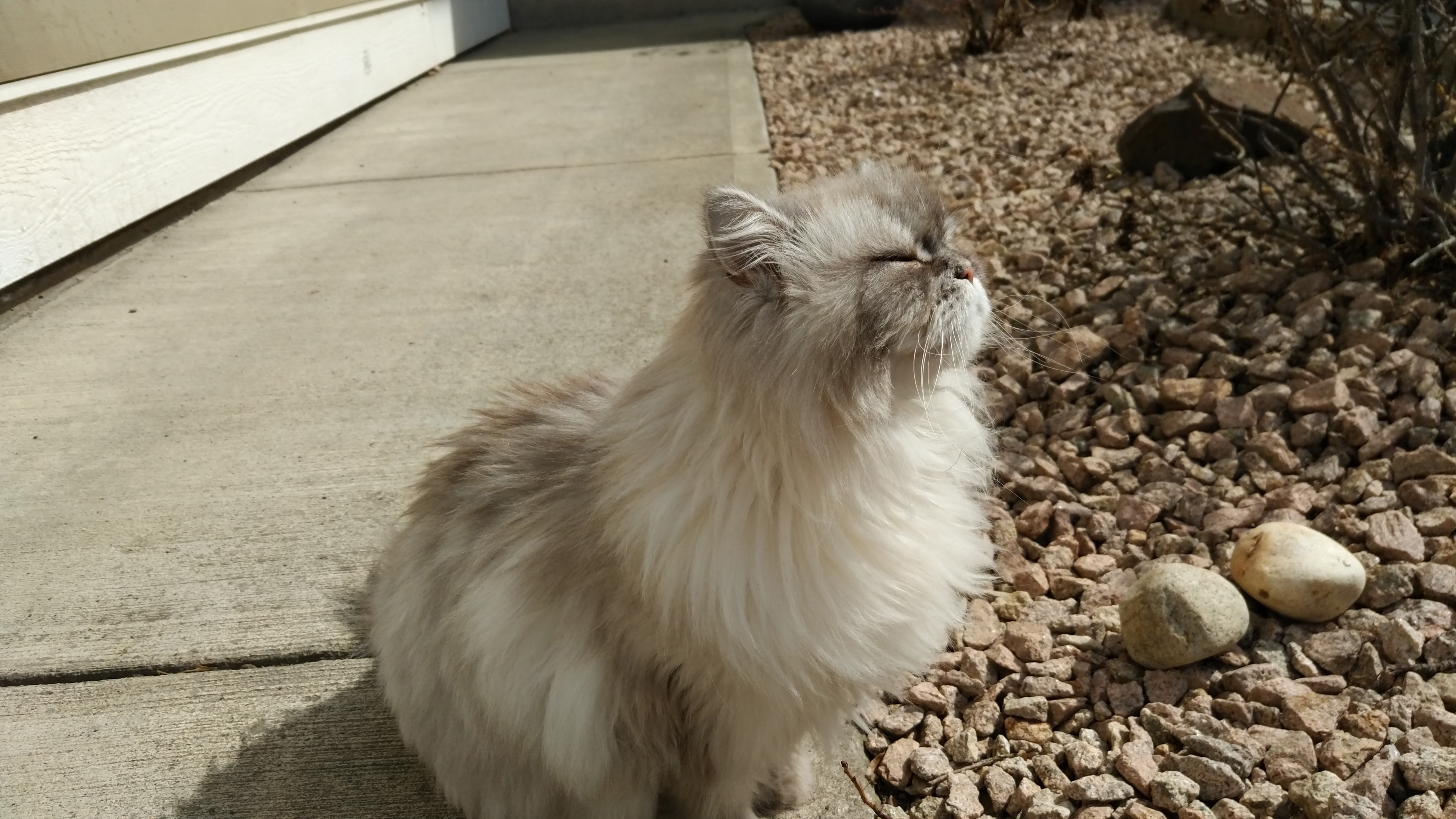 To make this phone more appealing to consumers, Alcatel sells it packaged with a VR headset. This is more of a bonus with the Android version than with Windows due to the dearth of VR apps in the Windows Store. Even so, given the quality of the phone that you’re getting for around $600 CAD, the headset feels like a freebie.

Mind you, the presentation is more impressive than the headset’s functioning. It feels solid and comfortable and comes packaged in a plastic box that can be used as a storage case.

Alcatel has also made it easy to access the phone’s headphone socket so you don’t need to rely on Bluetooth. Unfortunately, the Idol 4S seems to be the only phone that fits in the headset’s slot and the apps that are preinstalled on the phone are underwhelming. It doesn’t help that the two buttons on the headset -- 'Enter' and 'Back' -- which are supposed to make the VR menu easy to navigate, didn’t always work on my sample. Using the headset was therefore a frustrating experience.

Notwithstanding the underwhelming VR component, the lack of readily available accessories and a few minor niggles with the phone itself, the Idol 4S with Windows 10 has a lot going for it, especially if you’re a Microsoft hold-out looking to upgrade.

For everyone else, it’s hard to recommend the Windows 10 version unless you think you can live with the limitations of the OS. This is no reflection on the phone itself, however. Hence, in the unlikely event that you do decide to switch horses, the Idol 4S could make you see Windows 10 Mobile in a different light.