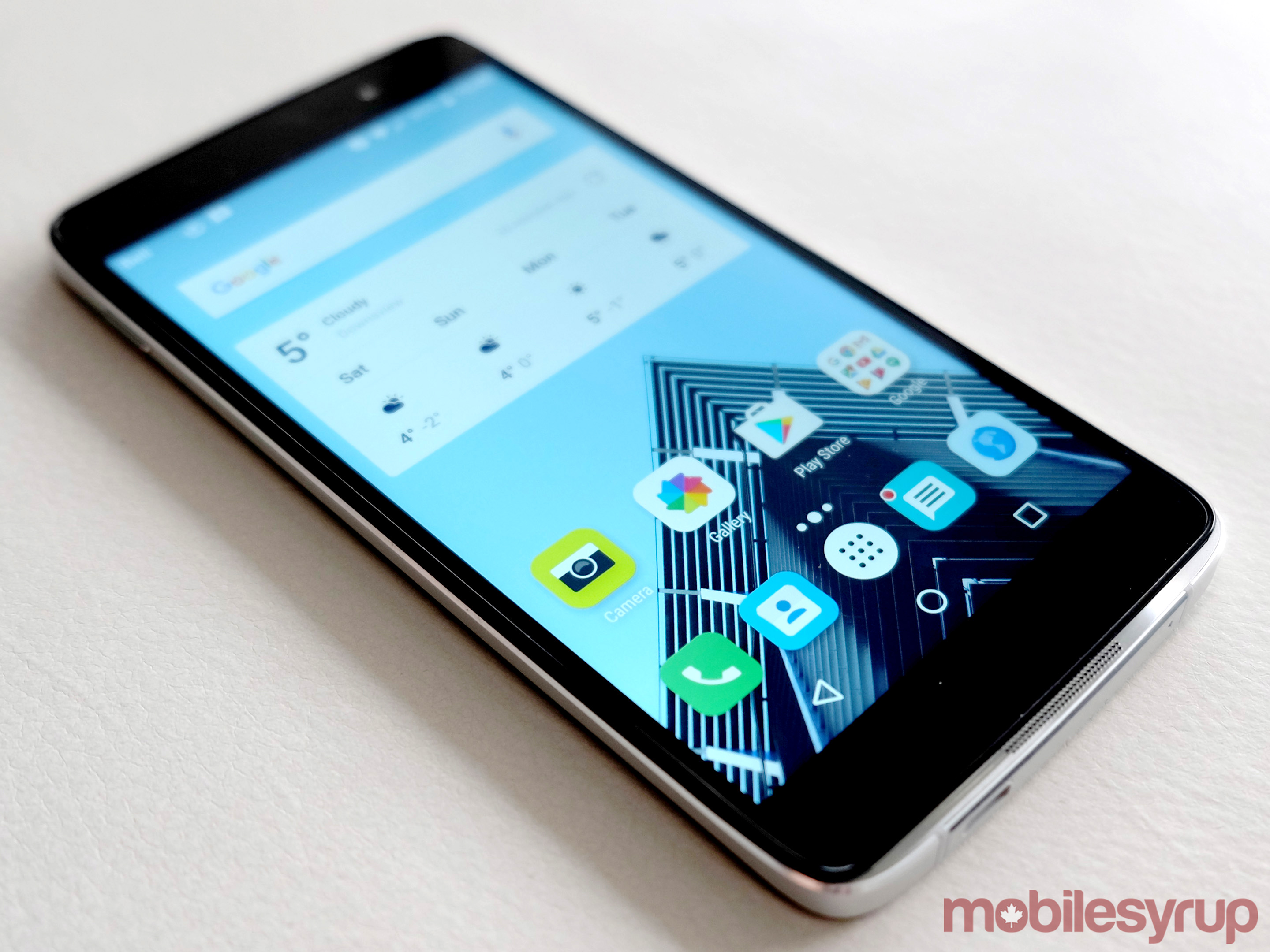 Being the fifth-largest smartphone manufacturer in North America should garner more attention, but for Alcatel, it always seems like it is running uphill to get noticed. The Idol 4 is in an affordable price range with a feature set that offers bang for the proverbial buck.

Mid-range smartphones are where growth is arguably most robust because the choices are more varied, and prices more palatable. Still, there’s work to be done for vendors like Alcatel, who have to claw for whatever slice of the market it can grow.

For $300 outright, and with a VR headset included (more on that later), the Idol 4 is a lower mid-range device that sounds unique because of that hardware bundling. Forget the headset when it can be replaced with something else. This phone’s performance doesn’t have much to do with it anyway. 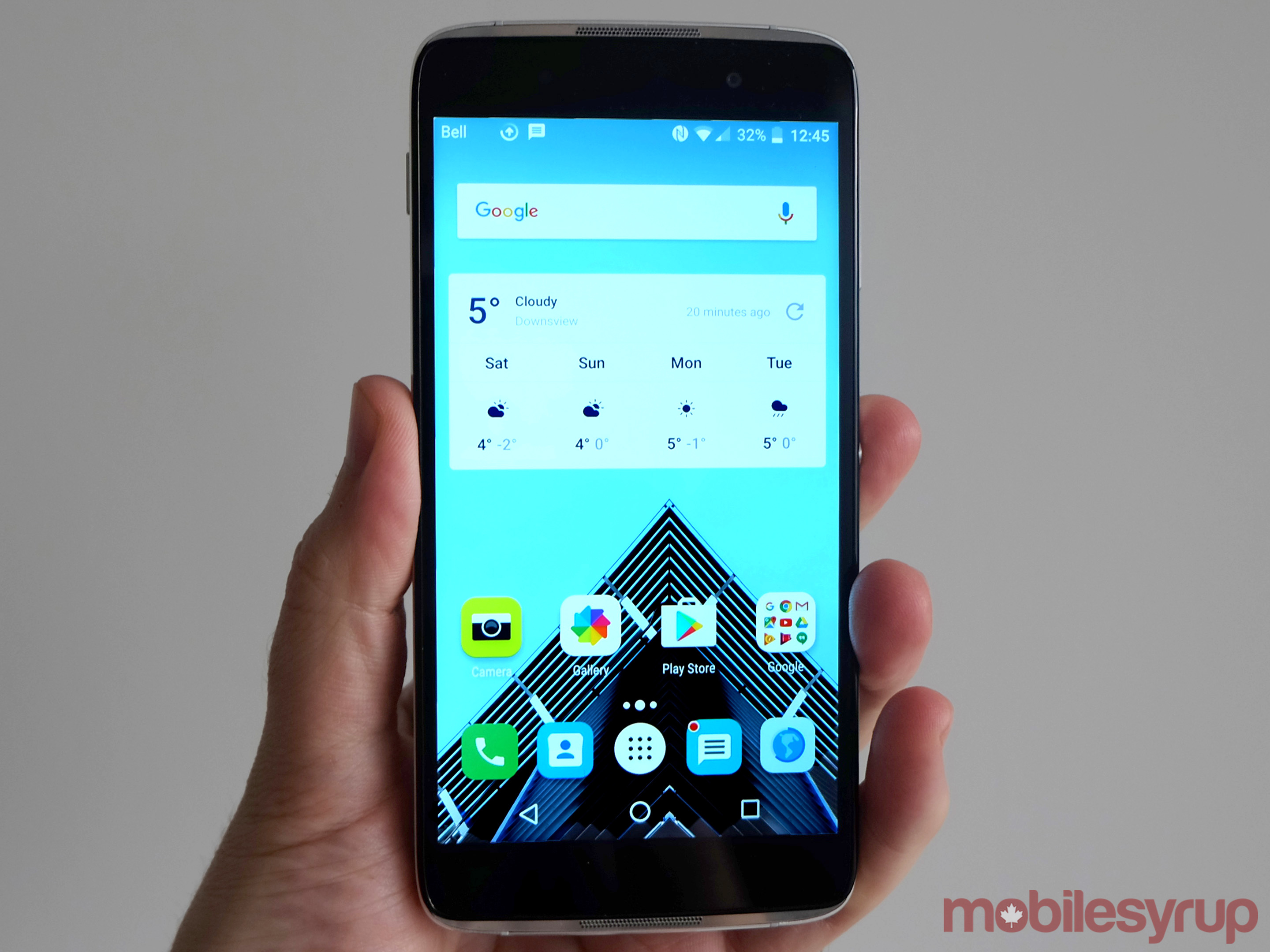 While every bit an Alcatel device, the form factor and hardware have already hit the market in the BlackBerry DTEK50. Of course, the DTEK50 is a rebadged version of this phone, and not the other way around. The differences on the outside are mainly aesthetic, with Alcatel using glass on the back instead of the rubberized plastic BlackBerry opted for.

Being a mid-range device, the Idol 4 has its share of trade-offs, but what is inside isn’t bad. The Snapdragon 617 chipset may not be quite on par with Qualcomm’s faster processors, but it seems ideally suited for where this phone is. With only 2GB of RAM on board, the efficiency of this combination inevitably hits a wall with demanding tasks.

What is indicative here, though, is that Alcatel has learned how to make a phone look better than its price range would suggest. Lightweight with a nice form factor, it has a nice and bright display, while the glass back is elegant, despite how much of a fingerprint magnet it becomes. Front-facing stereo speakers are a rarity for a mid-range phone, and they have the unique feature of facing back too, making the phone audible face up or down on a flat surface.

That’s a considerable difference when thinking about how many handsets sacrifice speaker quality by sticking it in the back, and taking this approach does pay some dividends, including with call quality when talking to someone on speaker.

The “boom key” is Alcatel’s coinage for the “convenience key”, as BlackBerry called it, and its primary purpose is a customizable action button to launch an app or open a task. Pressing it while the screen is unlocked defaults to a weather effect on the home screen. A double-press while the screen is off or locked snaps a photo with the rear camera. Holding it shoots a burst.

Clearly, the company looked to make this key a major part of the phone’s daily usability. Customization options include making use of the same camera features while the screen is on, or making it an app shortcut. 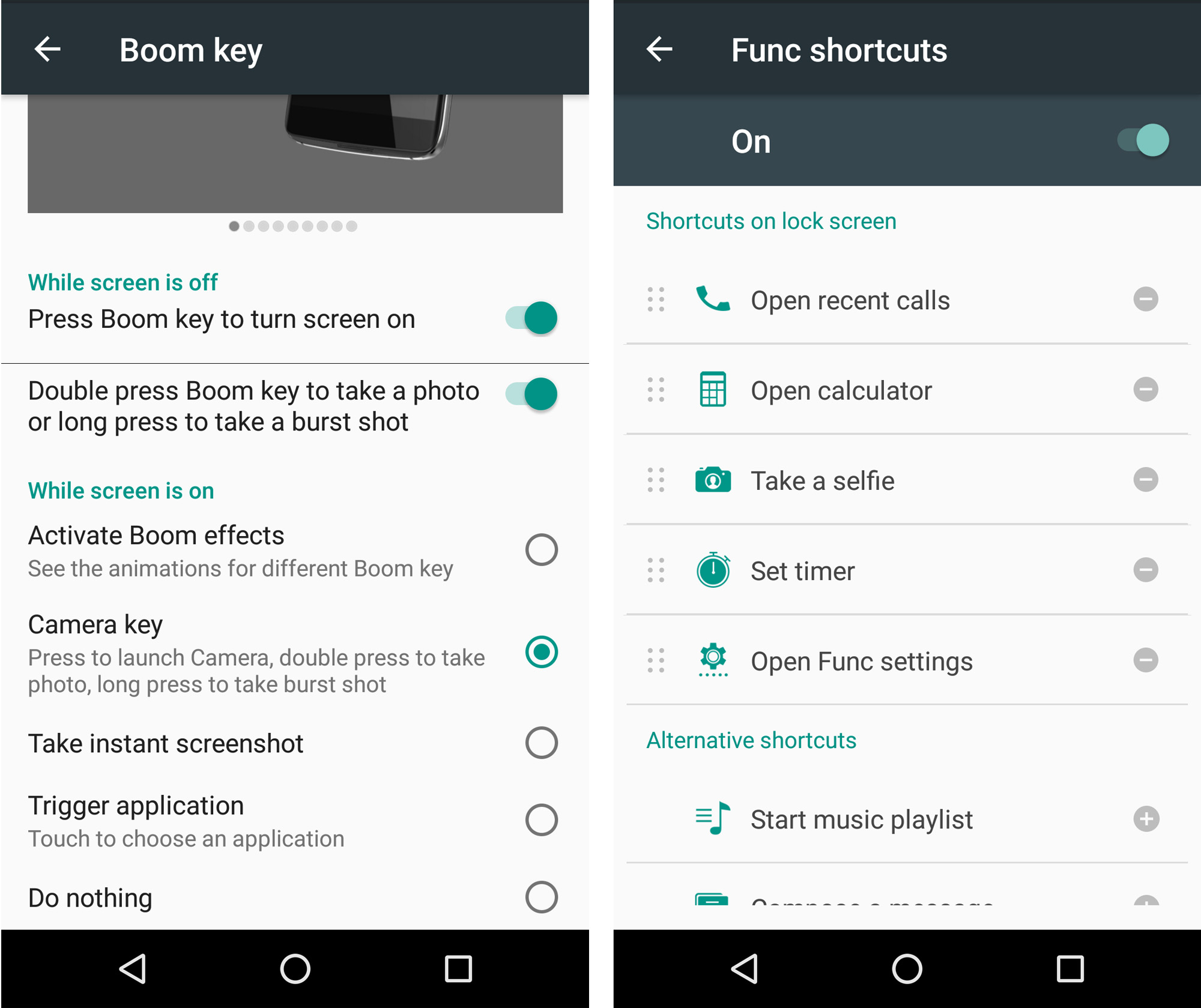 Unlike other manufacturers who have yet to restrain themselves, Alcatel wisely chose to let Android run closer to stock. BlackBerry chose to do the same with the DTEK50, except the software differences between them are pretty stark.

The home and lock screens are altered. Icons look different, and Alcatel’s camera interface also does things differently. It starts from the lock screen and progresses from there. A row of shortcuts, called “Func shortcuts,” below go directly to taking a selfie, setting a timer, viewing recent calls or opening the calculator.

Alcatel has made this row customizable under ‘Settings,’ ‘Lock screen,’ Function shortcuts, where the list of five can be switched with others. There are about 10 others to choose from, like composing a message, adding a contact or starting a sound recording, among others. Strangely, I could only add custom ones to the selection list by removing one from the lock screen list.

Still, the option to do it is useful because third-party apps can be added. For example, I added NHL GameCenter and Netflix to the list as app shortcuts, but I couldn’t set up a specific action for that app other than just launching it.

The boom key can step in to fill a similar role, except its list of choices is limited. There are only two options while the screen is off, and a handful when it’s on, one of which is for the key to be disabled and do nothing. The camera shortcuts were best for me, and I could switch to trigger an application in the settings, if I wanted. 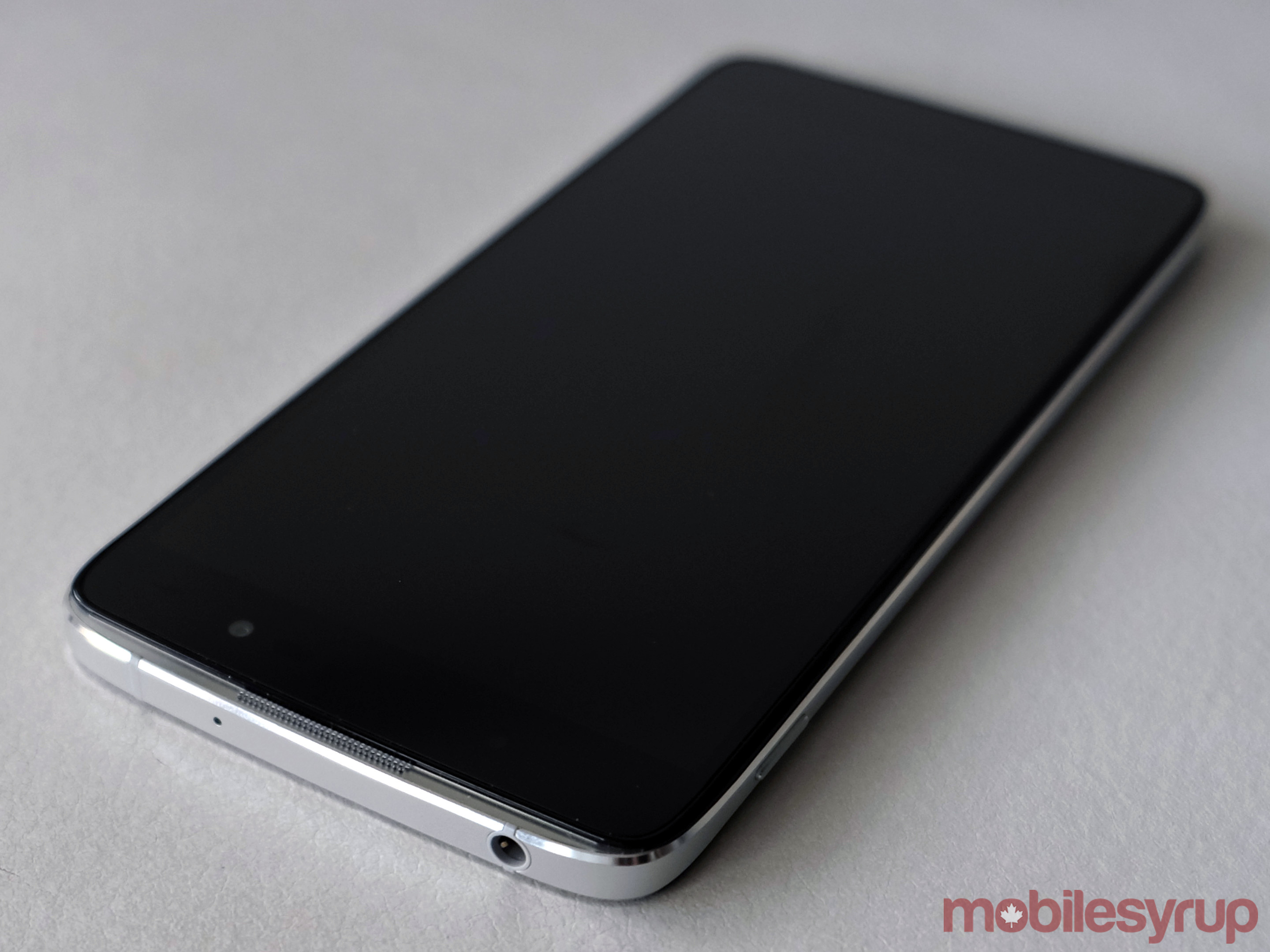 Making the Idol 4 VR-compatible with its own headset looks good on paper, but probably not in practice. I wasn’t able to test this because I didn’t have Alcatel’s VR headset, but when looking at 1080p resolution on a processor like this, I am assuming the experience is more in line with Cardboard than anything like the Gear VR or Daydream VR. Thus far, Videotron is the only carrier to offer the headset with the phone in Canada.

Consumers demanding robust performance aren’t likely to take the Idol 4 seriously. This phone’s pedigree is in not doing too much at once. Even so, basic usage didn’t look or feel like a crawl, even if it was somewhat obvious when doing things like launching apps or navigating an interface. Casual gaming also felt pretty fluid.

The trade-off in all this is battery life. The 2610mAh battery inside isn’t especially large by today’s standards, and you would think a 5.2-inch 1080p display would help the cause, but the battery does drop precipitously during usage. The more the processor has to do, the faster it drops.

Having Quick Charge compatibility does help, with a 60 percent charge in about 30 minutes. The phone also uses microUSB, not USB-C, putting it in line with other lower mid-range devices.

Mid-range phones are not always easy to predict when it comes to camera performance. The DTEK50 provided plenty of clues because the Idol 4 has the same image sensor and lens, and so, results are not all that surprising.

The respective interfaces present some variation in how to shoot, except results can only truly be skewed by turning HDR on or off, or using the manual mode. Much like the DTEK50, daylight images come out best, albeit with more muted colours because of lower shutter speeds and ISO that appears to default to 400.

Adjusting these in manual mode can produce far more dynamic and impressive results, as I did with the palm tree images. It’s also the best way to shoot in low-light or at night because of the noise Auto mode brings out. Even if a night shot comes out a little dark when shot in manual, brightening it afterward can bring out more light detail without making it such a grainy image. 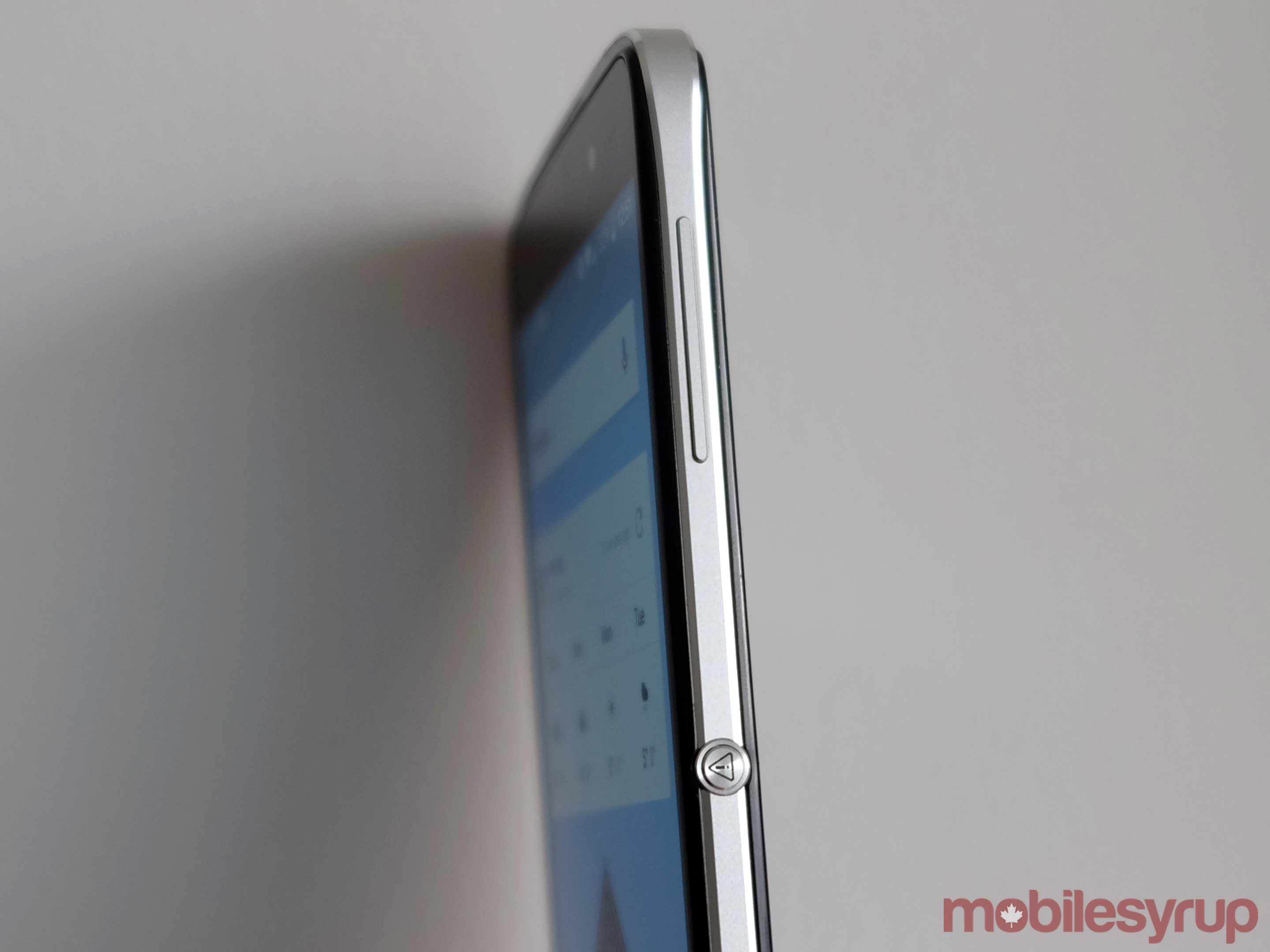 Despite its obvious limits, the Idol 4 is a noticeable improvement from its predecessor. It’s also not all that different from the DTEK50, which BlackBerry touts as a highly secure Android handset. Is the Idol 4 any less secure? No, not really, it’s just that Alcatel doesn’t offer a software suite that is as deep and productive as BlackBerry does. It’s a matter of different strokes.

The Idol 4 is a $300 phone outright, making it cheaper than others in this category. The two lingering issues are longevity from battery life and Android updates. Motorola’s G4 Plus is available now for $350-$400, depending on the vendor, and is being sold unlocked at Costco now for $349.99. The DTEK50 is available unlocked from BlackBerry directly for $429.99.

Both of those devices are likely to get updates, especially BlackBerry and how it has stuck to a monthly security schedule, whereas the software upgrade process may be murky for Alcatel. Whatever the case, Alcatel put together a decent phone at a price and performance level made for budget-conscious users who are looking for the basics.