How to do a factory reset in Windows 10 Mobile or Windows Phone 8.1 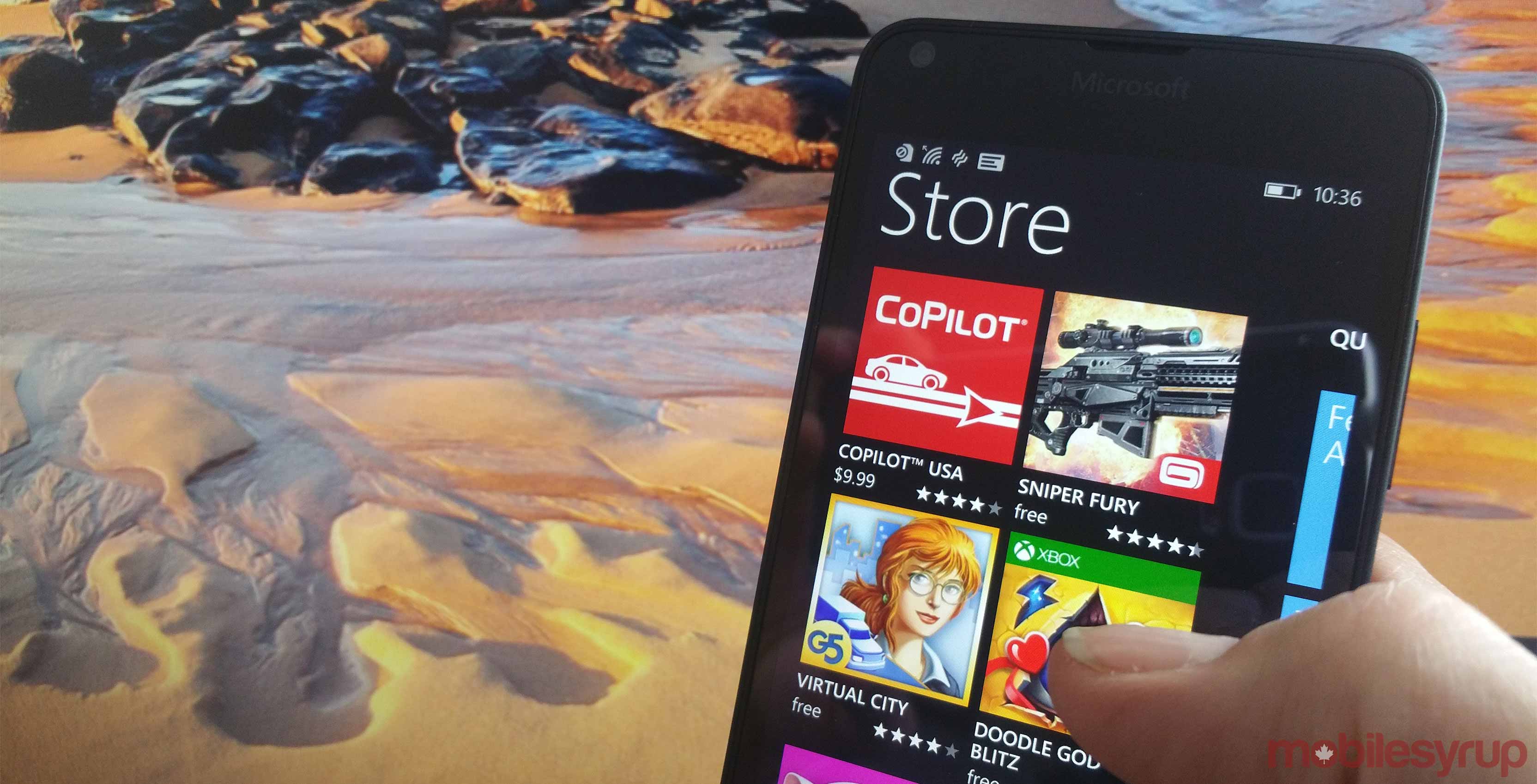 Finally giving up on Microsoft’s mobile OS? Read our deadly serious guide to deleting all your data from a phone running the two most recently released Windows mobile operating systems.

So, you’ve heard that yet another developer has stopped supporting the Windows Phone version of your favourite app and decided it’s time to switch over to a mobile OS that people actually use? Maybe you’ve been tempted by the sweet-sounding names of different versions of Android. 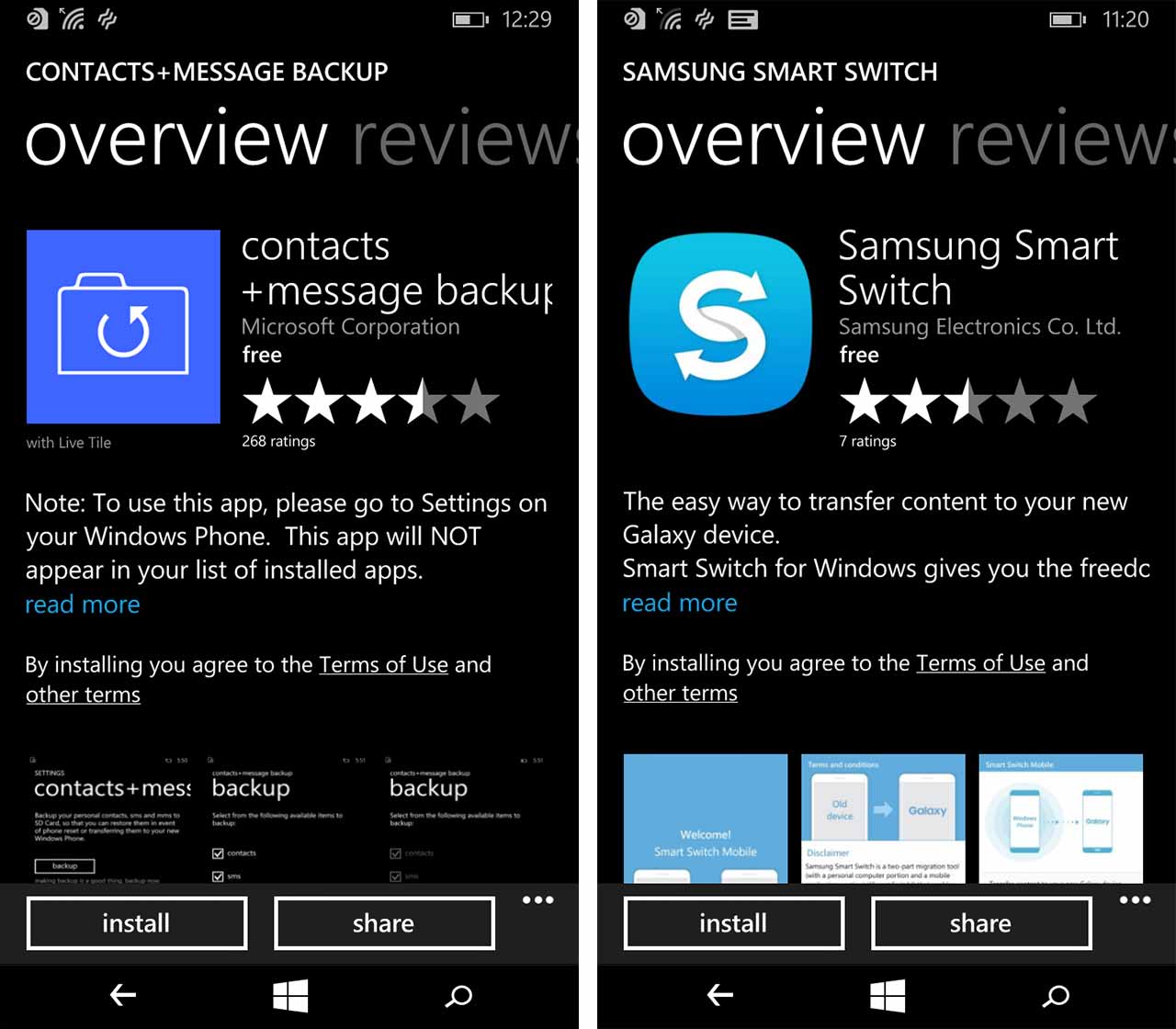 Or you’ve opted for that OS with a fruit logo that wants its devoted supporters believe in its ‘brave’ design decisions. Either way, you’re going to have to erase all record of your existence from the Lumia you’re giving up.

The easiest way to do that is with a hammer. If you’re planning to trade in your Windows phone for an approximately 0.50$ discount off the price of a new device, however, we’d recommend doing a factory data reset instead. This guide will show you how to remove personal data from your Windows phone without breaking anything (except, perhaps, your heart).

Back up your phone 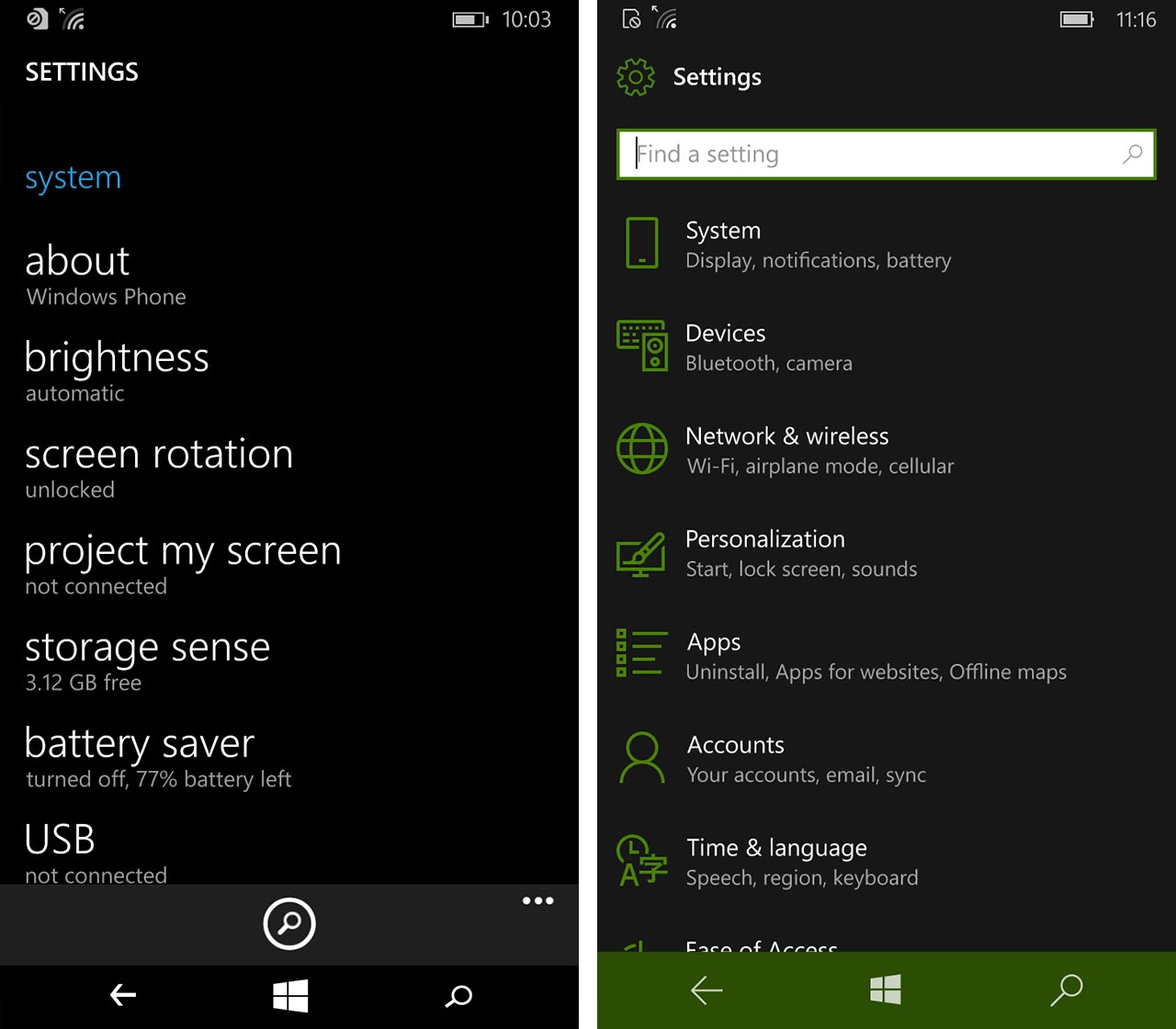 The first thing we’re obliged to tell you is, “Make sure you have everything backed up.” For Android and iOS users, this is generally a straightforward process thanks to the various software tools available. This unfortunately is not the case with Windows Phone. If you use OneDrive, you might already be automatically uploading your photos to the cloud. Alternatively, you can connect your phone to a PC and copy and paste pictures, videos and document files from your device to the computer, just like you would from any external storage drive.

Contacts and SMS texts are another matter, however. Microsoft has an app in the Windows Store called contacts+message backup, though interface formerly known as Metro is confusingly full of lowercase letters. User reviews also aren’t great. Samsung’s Smart Switch app is also available for Windows Phone 8.1 and Windows 10 Mobile. In theory, this app makes it easy to transfer contacts, calendar data, images, music and videos from your Windows Phone to a recent Samsung Galaxy smartphone. 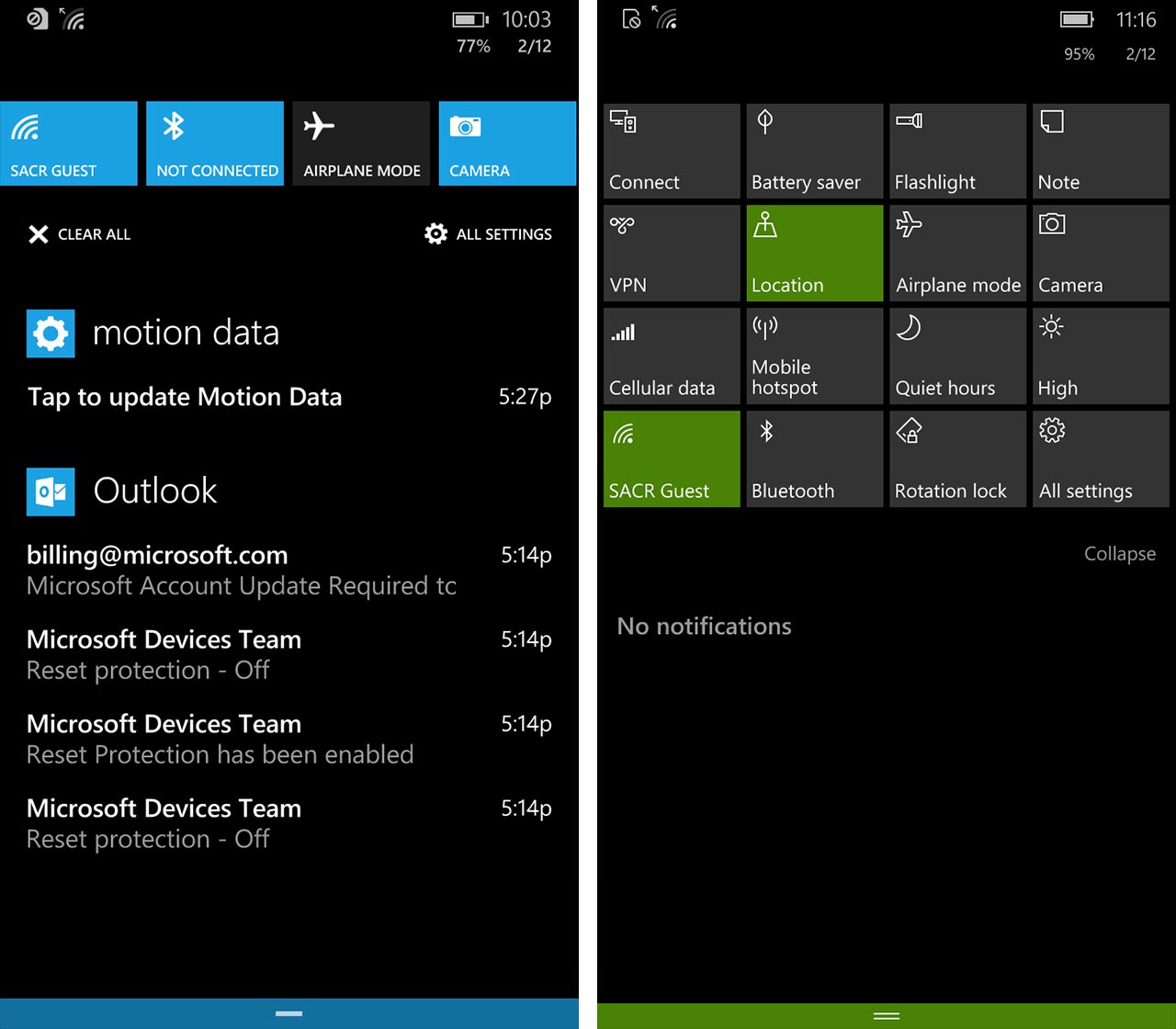 I found that it worked under Windows Phone 8.1 but testing it with Windows 10 Mobile was about as much fun as sprinkling salt on a paper cut. A PC or Mac-based alternative is Wondershare’s MobileTrans software, which the developers claim can transfer contacts, messages, call logs, calendar data, photos, music and video between compatible phones.

Unfortunately, it isn’t free though there is a trial version that allows you to test it out before buying.

Say goodbye to your data 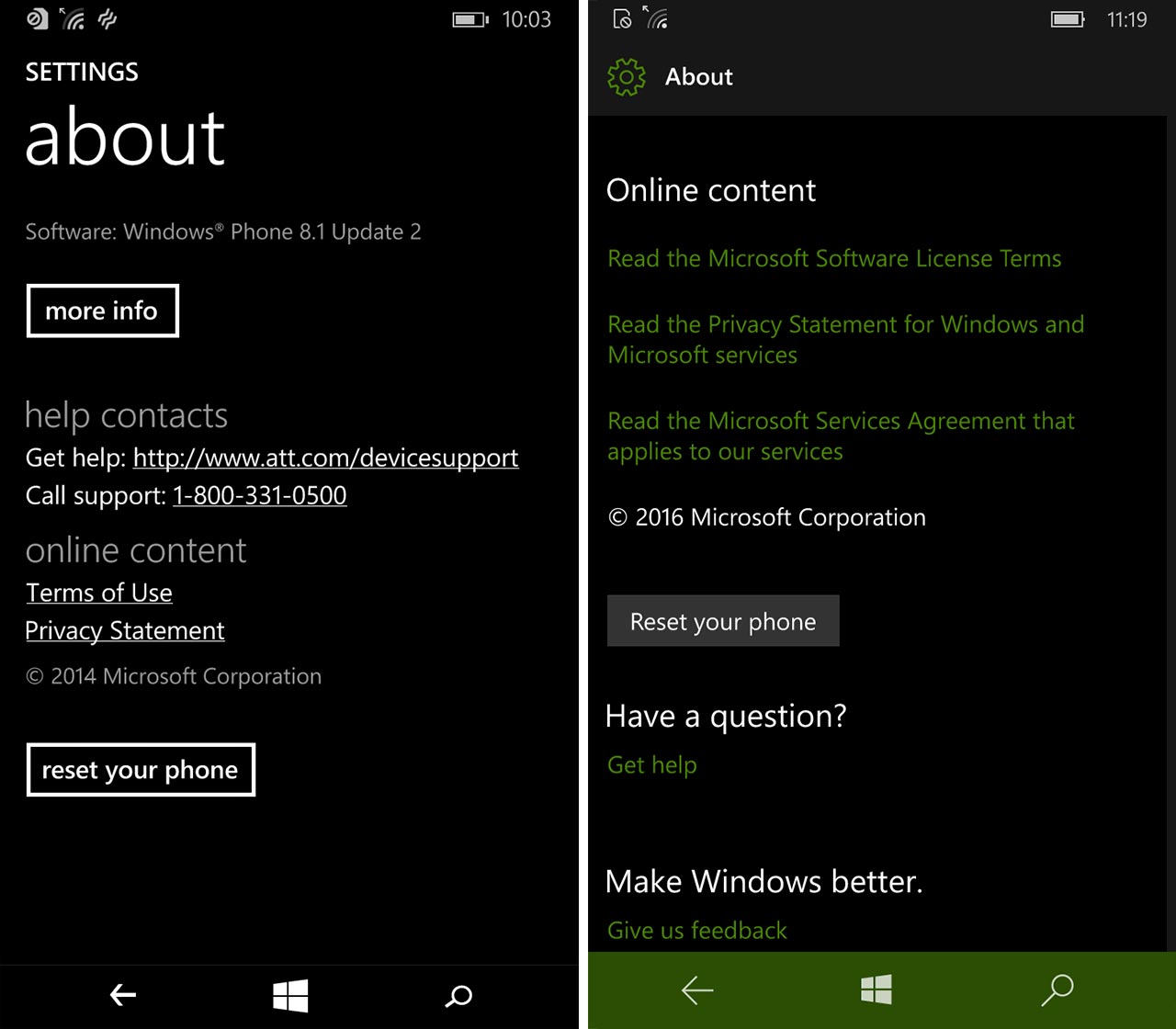 Once you have backed up your data, it’s time to erase the content forever from your Windows phone. The first step is to open the Settings app by swiping right-to-left at the Start screen and finding the app in the alphabetical apps list. You can also swipe down from the top of any screen and tap ‘All Settings’ in the bottom right corner of the grid of shortcuts this gesture brings up.

You should now be in Windows’ ‘Settings Menu.’ Under Windows 10 Mobile you should see ‘System’ as the first option. Tap on this to enter the System submenu. The first heading in Windows Phone 8.1’s Settings menu is ‘Network + wireless.’ If you see this, jump forward in this guide. 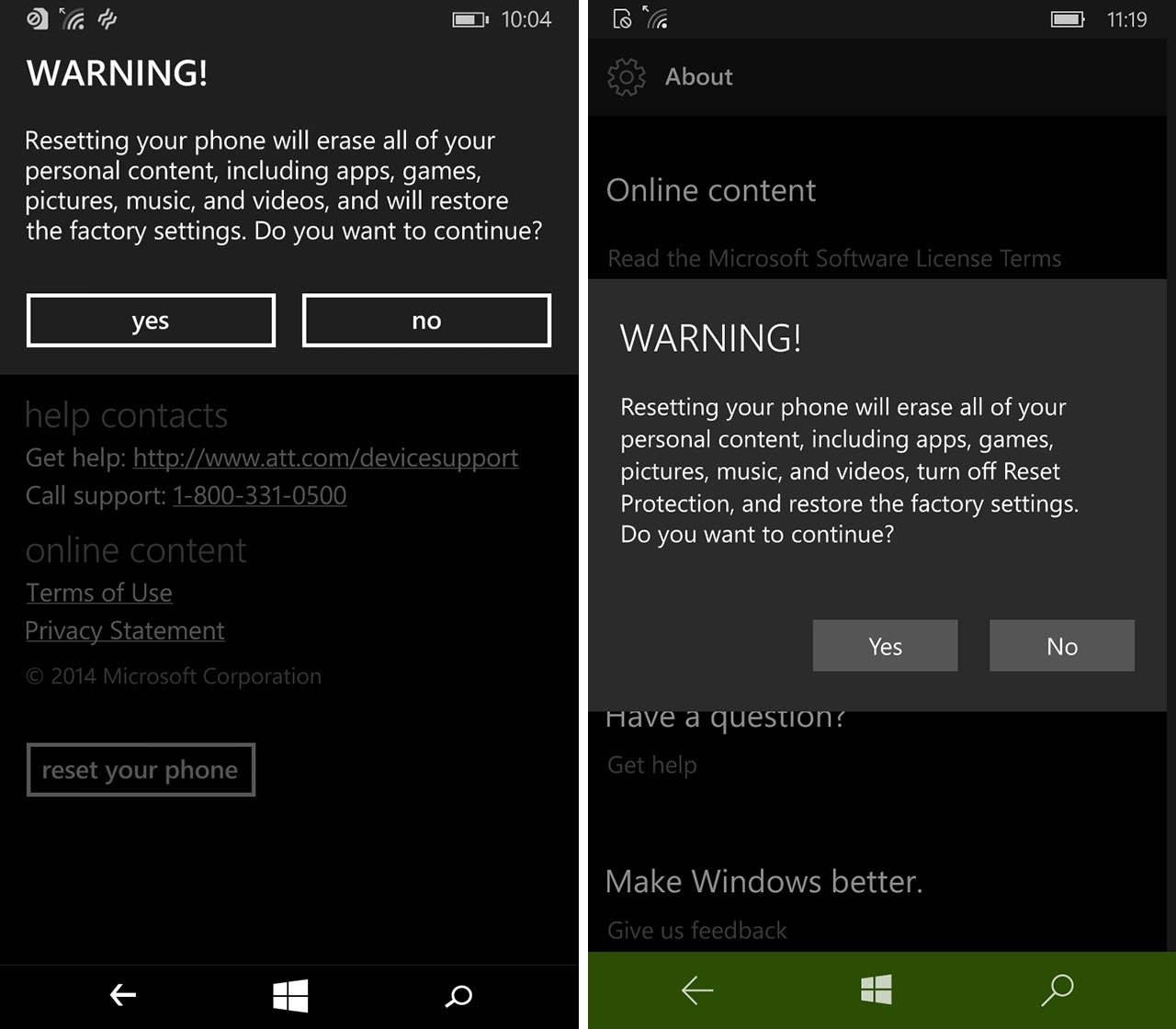 In Windows 10 Mobile’s System submenu you should find a new set of options, none of which is actually called ‘Factory Data Reset.’ That’s because, in classic Microsoft fashion, this option has been put in the place where you’re least likely to look for it: under the last menu option, which is ‘About.’ To find its equivalent in Windows Phone 8.1’s Settings menu you need to swipe down and look for ‘About.’

The first thing you’ll notice about the ‘About’ setting is that you won’t be able to find the word Reset there, either. That’s because it’s beneath the description of your device and the options under ‘Help Contacts’ and ‘Online Content.’ Swipe up and you should see Reset Your Phone in a box near the bottom of the screen. 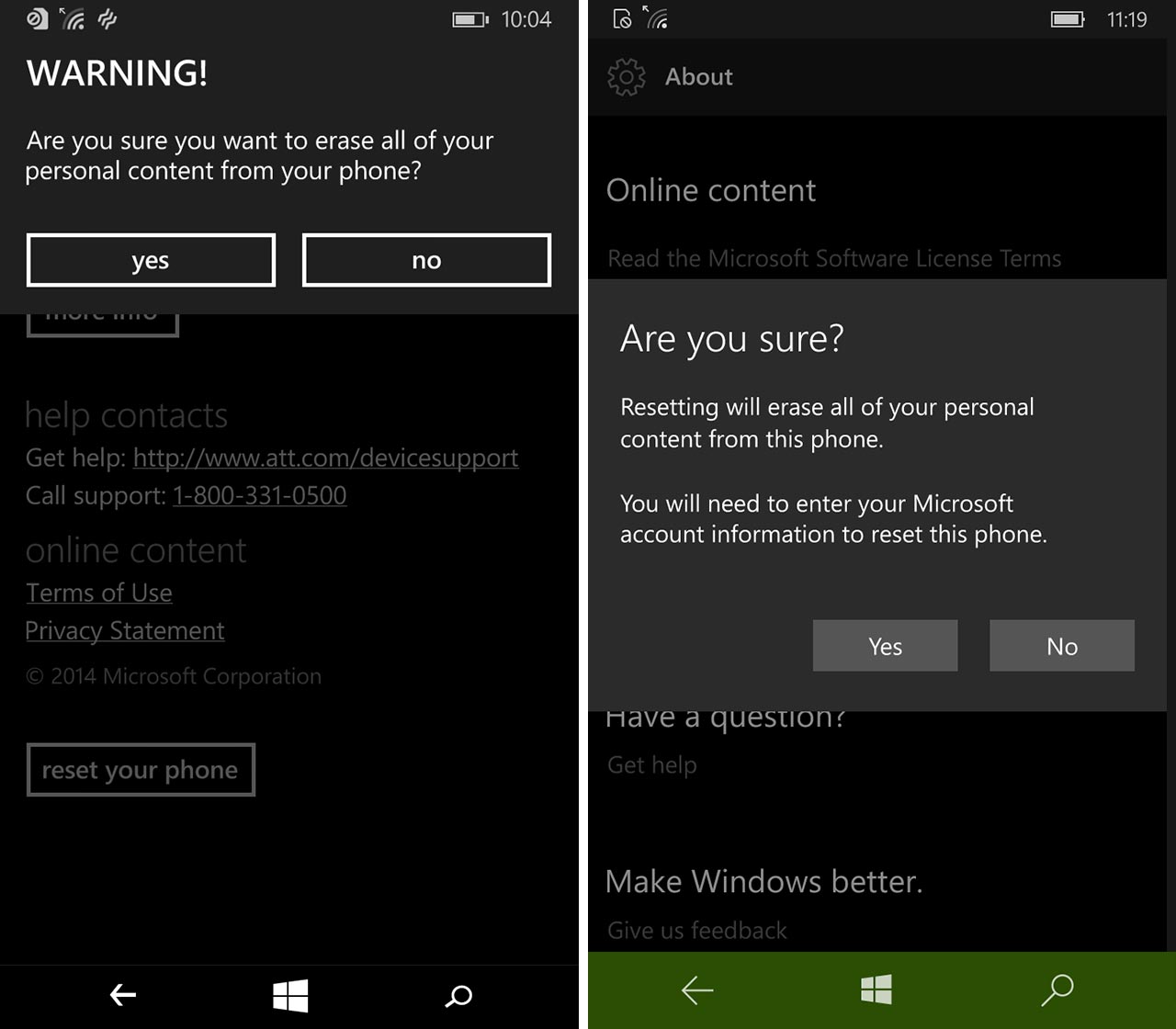 Windows should now give you one more chance to back out. Another text box will ask you, “Are you sure?” If you are, select Yes. After this there is no going back.

With Windows 10 Mobile you may be prompted to re-enter your Microsoft password before your phone restarts, erases your data and reboots in its factory state. Hence, you can still bottle it at this point and forget about the whole OS switchover. Bear in mind, though, that in the time it’s taken you to get this far, Windows Phone’s user base has probably dropped a few more percentage points so you might as well just get it over with now.

Once your phone reboots, it should be free of your personal data.