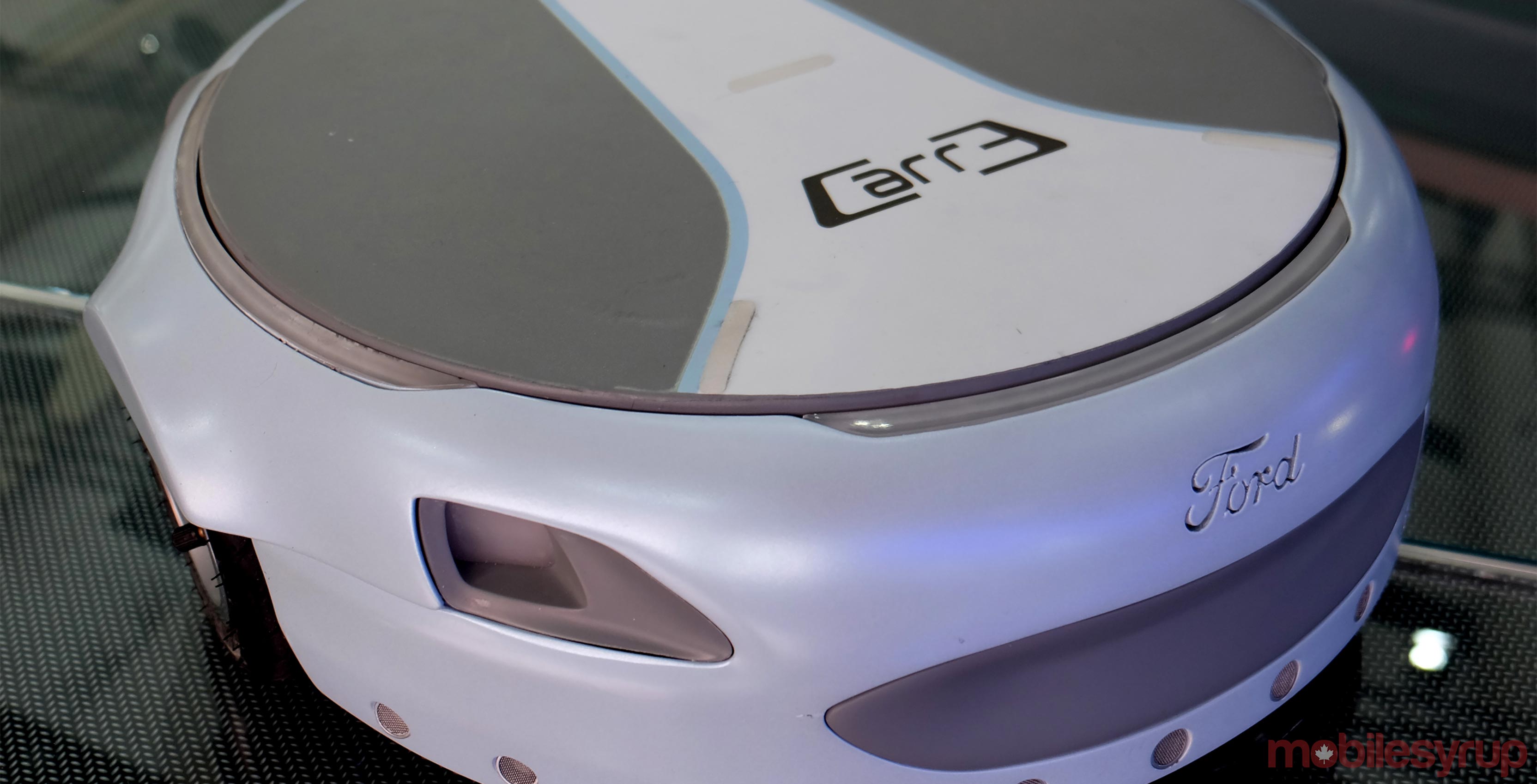 It’s not a Segway, but the Carr-E is meant to be a ‘last mile’ personal transport assistant you can use to and from a vehicle controlled through an app. The four-wheeled gadget was available to try at Media Day on the eve of the Canadian International AutoShow (CIAS) for some first impressions.

The unit was first unveiled at a Ford event in Michigan in September, and is the brainchild of Killian Vas, a systems engineer with Ford in Cologne, Germany. Though still entirely a prototype, the app-based design presents an interesting take on short haul transport in and around vehicles.

The fit and finish gives the impression of something that is closer to being complete, but there are still several elements that haven’t been installed yet, so going into this, I knew it was very much a work in progress. 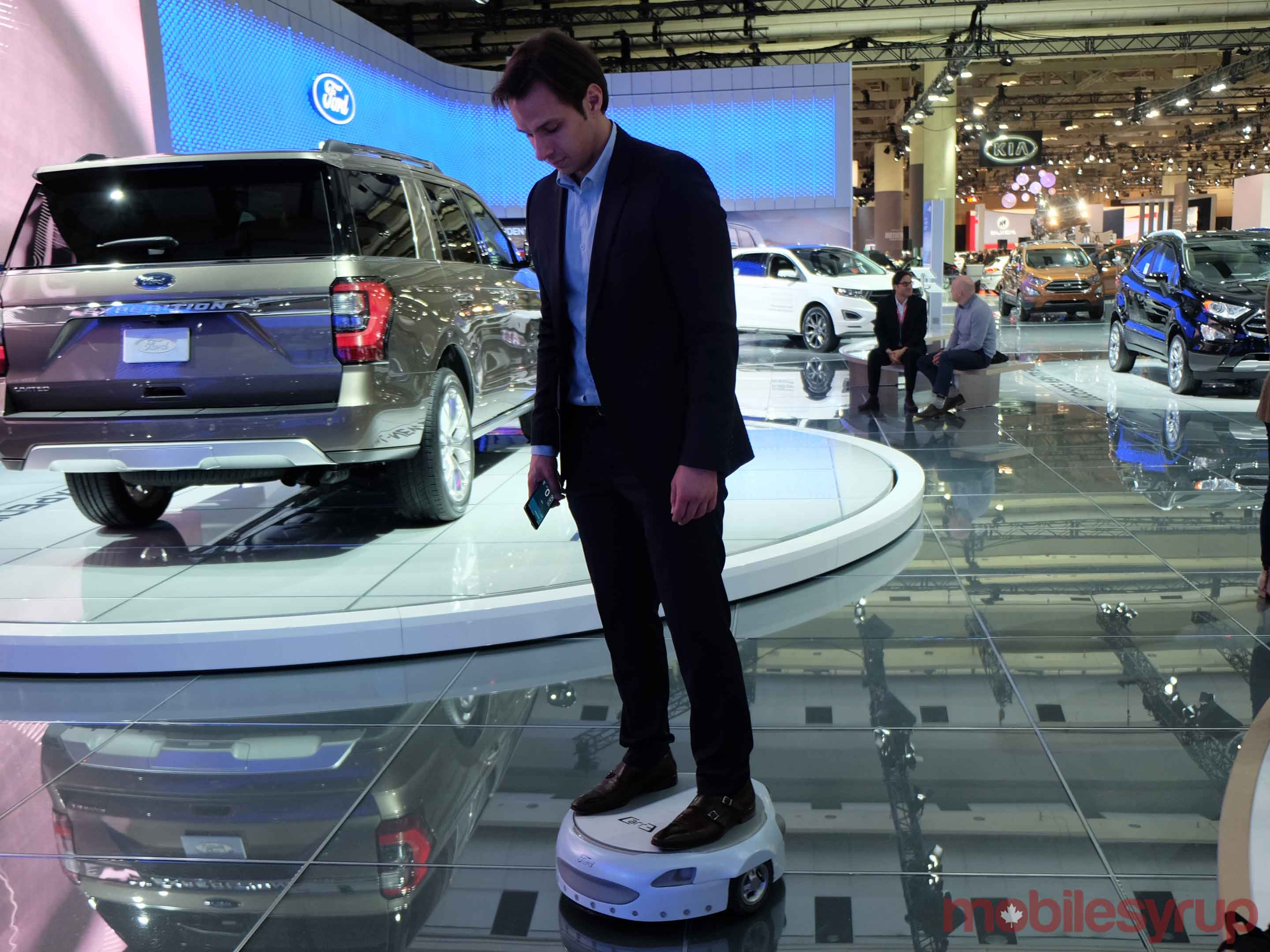 The unit currently weighs 33 pounds, though Vas is hoping to bring that down to around 20-22 pounds. A carry strap on one end makes it transportable. It has two rubber wheels on the sides, along with two omni wheels on the front and back to help steer the Carr-E to the sides.

It is designed to handle up to 275 pounds of weight on top, so is made to move heavy objects and users themselves standing upright. It can only function on dry ground, especially since the current prototype has crevices that expose electronics underneath. No rain or snow for this thing.

Top speed is 18 km/h, which is faster than it sounds when actually standing on it. There are LEDs ringing the top, plus headlights, turn signal lights and brake lights. The LEDs are expected to be programmable for both functionality and personalization. Unfortunately, none of the lights were operational at the tiem, so I couldn’t see how any of that works.

There’s even a horn onboard, which doubles as a Bluetooth speaker, in case you want to stream audio to it for whatever reason. 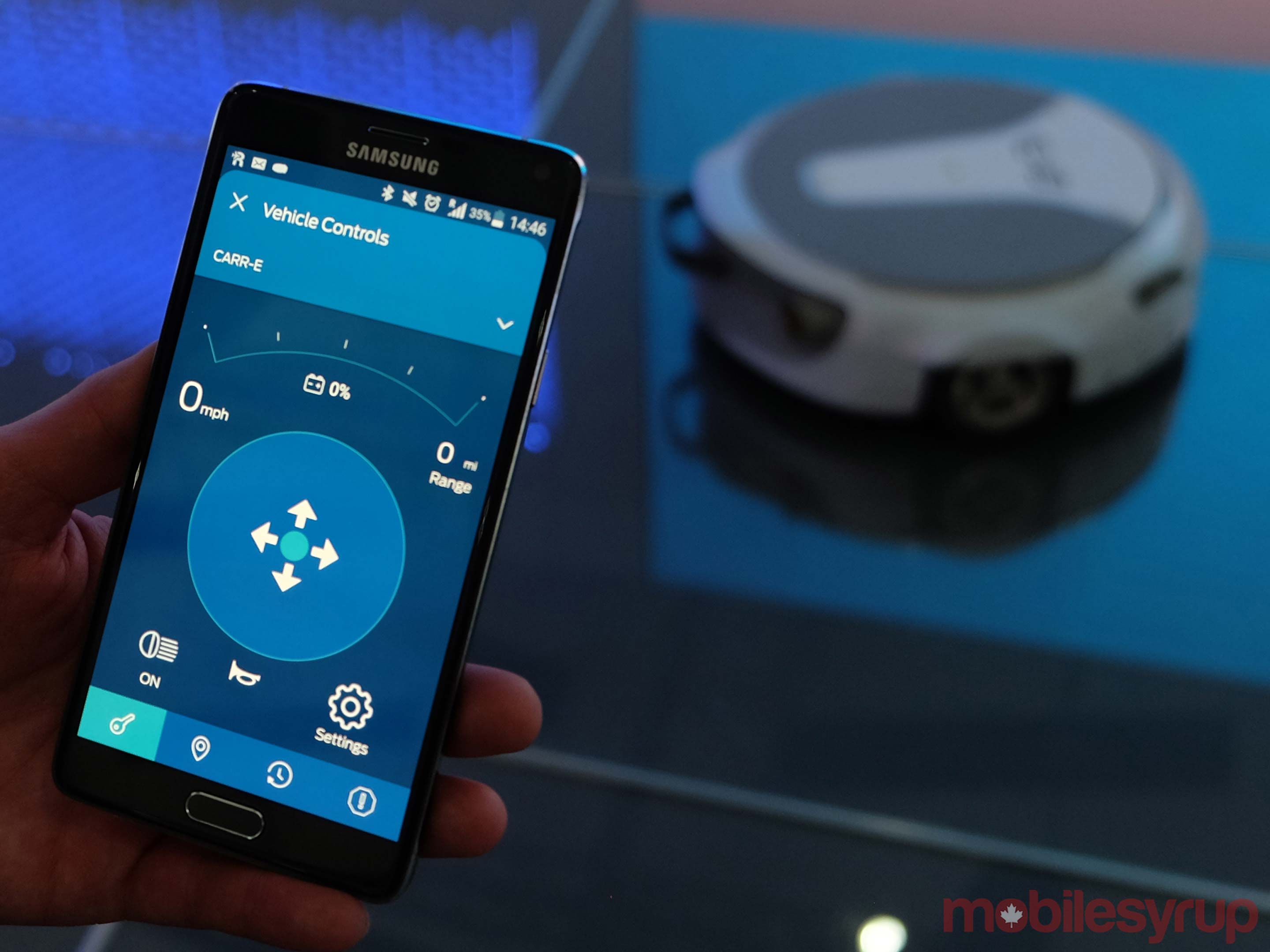 Vas showed an Android app controlling the Carr-E with three distinct modes to choose from. Ride-On is for users stepping on it themselves. Tethered is for placing luggage, boxes or items on top and having it follow you. Drone is more free-flowing with onboard controls on the app to steer it manually.

Rather than use Bluetooth alone to stay wirelessly connected to the unit, a handheld module acts as a transmitter instead. This also enables it to follow in Tethered mode. It is supposed to have built-in GPS, so location data can be pushed to the paired phone, but also to better prepare it for operating autonomously. For example, it might be possible for it to wake up and roll over across a driveway to a parked vehicle based on the location of the phone.

The Carr-E is meant to stay close, with a current maximum distance of two metres, but that’s also without GPS on. It can even stay closer, given the options for close, medium or far when in Tethered mode.

An iOS app hasn’t been developed yet, but Vas confirmed it would be made once the Carr-E came closer to being a reality as a consumer product. 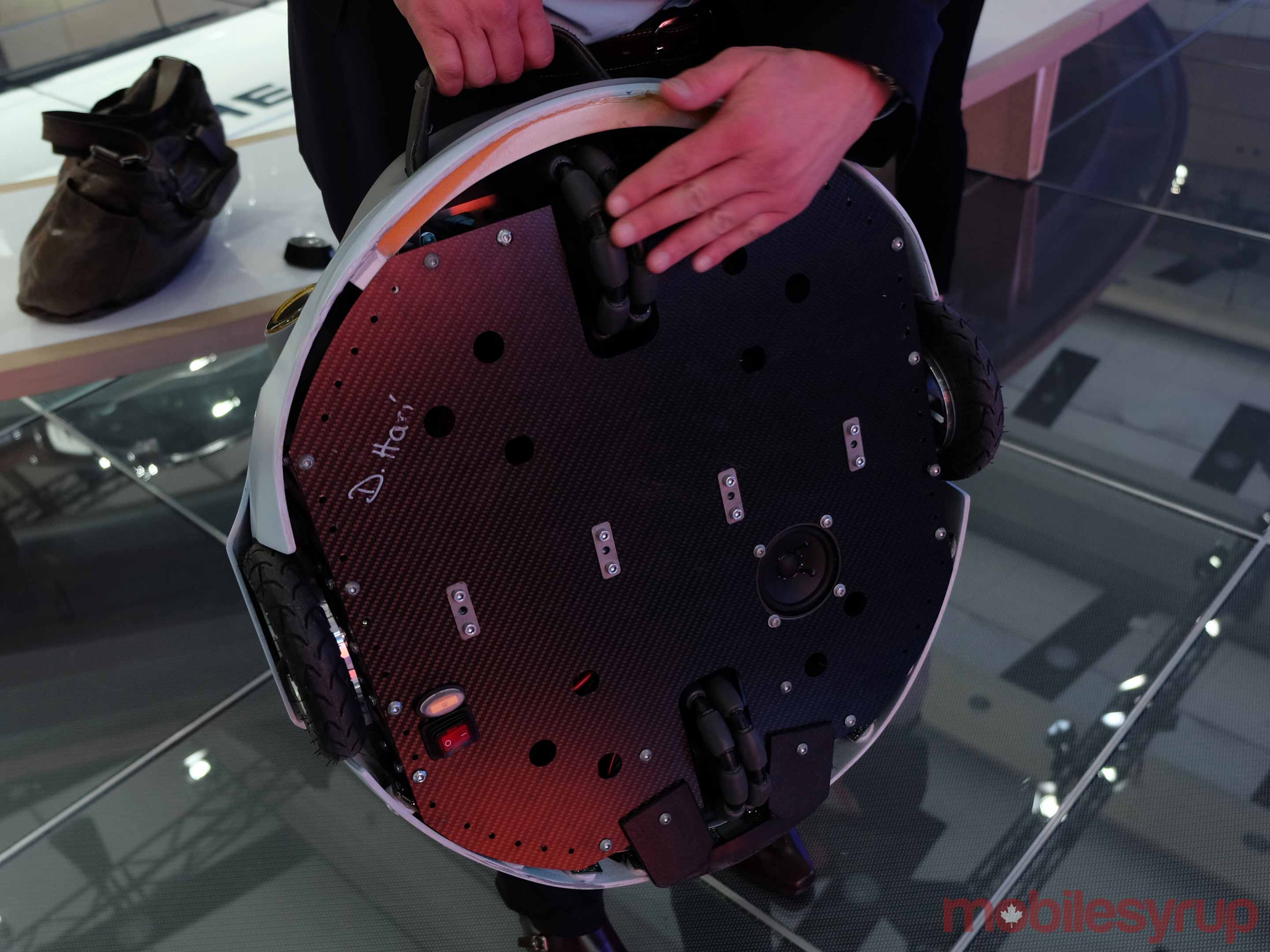 The sensors on top calibrate once a user steps on top, confirmed by an audible tone. Moving forward required applying more weight to my toes. The more pressure, the faster it would go. Shifting my hip left or right turned it in either direction. It took some getting used to, but unlike a hoverboard, balance was far less an issue.

It lacked in fluid movement — partly because of my own reticence, but also because of kinks in the unit’s calibration. Like anything, comfort would grow with practice, and it was undeniably fun to roll along on top like a robot. Learning the body language to make it smooth would take time.

If I were to use it to transport something, I would prefer to see straps to hold it in place. For example, a TV box could be moved on the Carr-E, but not without straps because the low centre of gravity and smaller diameter would almost certainly force the box to tip over. Hooks or carabiners along the base to use for such a purpose would make a lot of sense. If personal transport is to include various items of varying size, then it needs to have a better way to handle those. 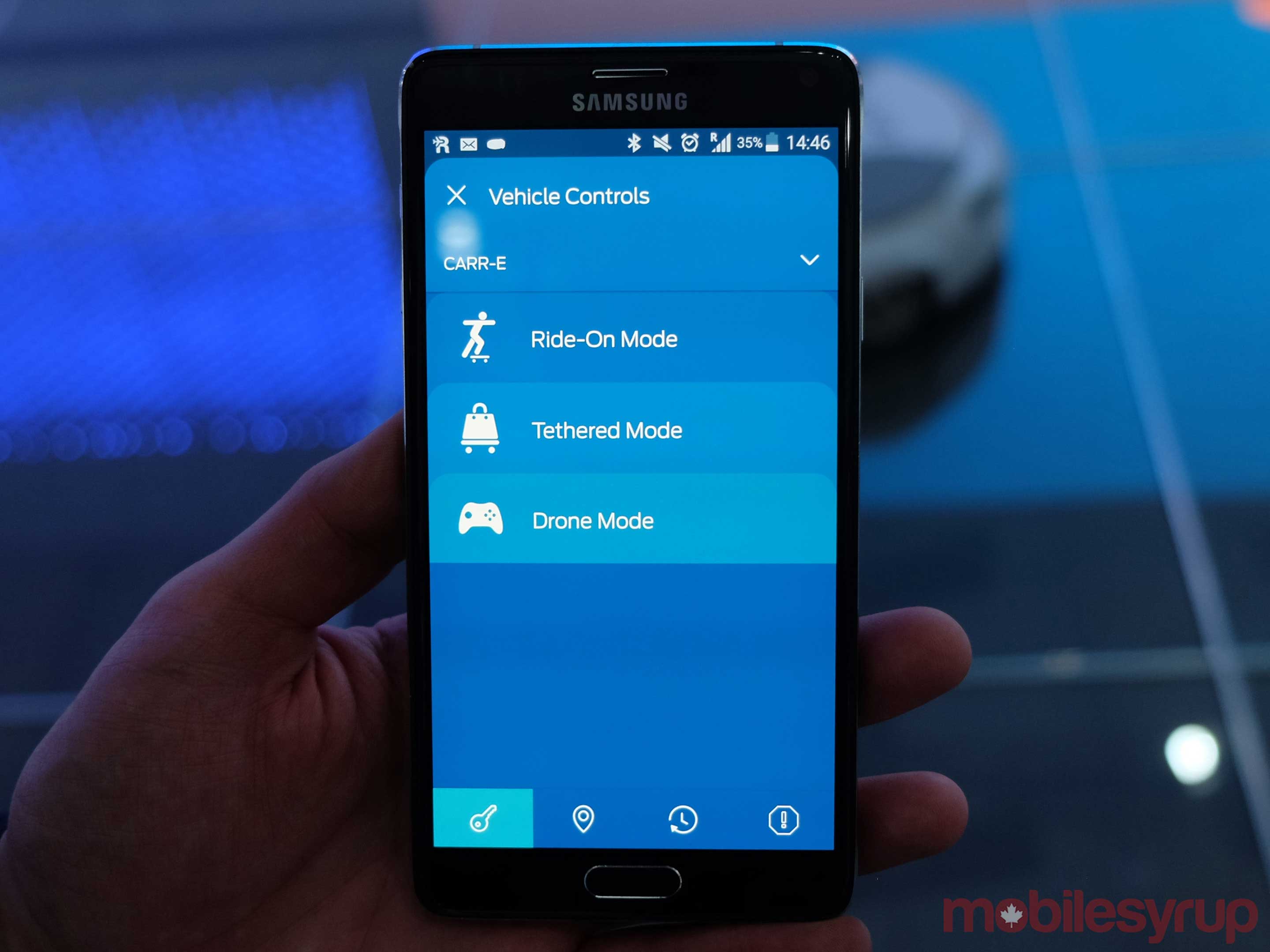 I was surprised to hear that it could handle 30-degree inclines, but again, without straps to work with, only square boxes could stay put without falling over. Riding on top with such an incline wasn’t something I was able to test, but I would be curious to see how stable it might feel to stand when moving up or down a ramp.

There is currently no launch timeframe for Carr-E, as it’s still in development, and Vas wouldn’t confirm how close he and his team were to finalizing the design. Being a Ford-funded project, availability and pricing is totally up in the air.