Over 60% of iPhone users are already running iOS 6, 15% more than iPad users: Chitika 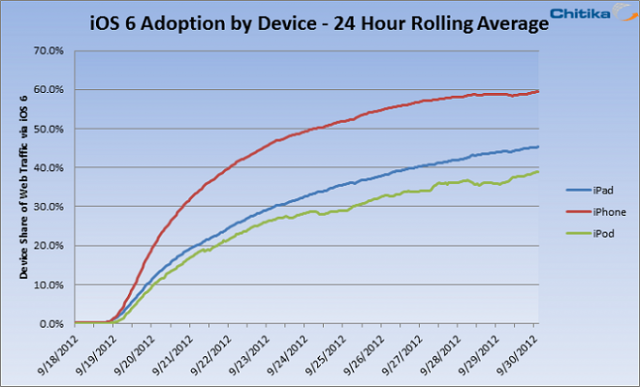 After only two weeks on the market, iOS 6 is running on over 60% of iPhones, 15% more than on iPads. The adoption rate has been pretty astounding and has allowed developers to adapt their apps to take advantage of many of the underlying improvements in the iOS 6 framework that may go unnoticed to users.

According to Chitika, iPhone users are adopting iOS 6 faster than iPad or iPod Touch users, likely because most iPhones support the upgrade, whereas the iPad 1 and iPod Touches before the 4th generation won’t be updated past iOS 4 or iOS 5.

In particular, the iPad 1, due to its limited 256MB of RAM, was not able to update past iOS 5.1, leaving many owners angry that their first-generation product is now obsolete. While most apps will still run fine for another generation or so on iOS 5, many developers will begin enforcing iOS 6 in the coming months.

And while it’s not fair to make comparisons to Android, it is interesting that this data comes at the same time as Google released its own distribution charts, showing Android 4.x on one in four devices, whether smartphone or tablet.