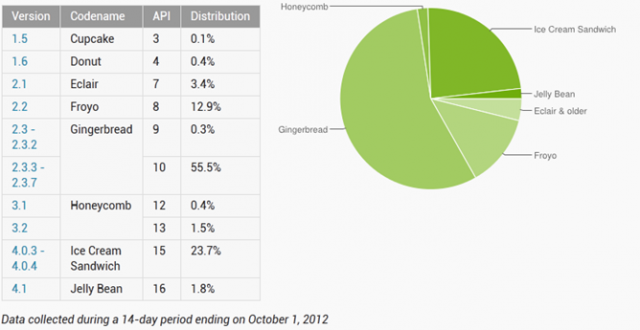 The month of September is over, and as we look forward to fall colours and gourds galore, we take a look at the past month’s Android distribution numbers, and apparently it’s still Gingerbread season after all.

Considering Ice Cream Sandwich launched nearly a year ago, and Jelly Bean over three months ago, it’s not that encouraging to see progress this slow. We say it every month, but the fact that the majority of Android devices are still on Gingerbread is a hindrance to the development of beautiful, hardware-accelerated apps.

We know that some devices, like the year-and-a-half-old Motorola Atrix, will never see Ice Cream Sandwich in any official capacity. The same goes for excellent devices from HTC, Samsung and LG. Considering many contracts are between two and three years, the number of Gingerbread devices is not likely to dip in any appreciable way for another year or so.

It’s not surprising that Jelly Bean is so low at 1.8%; only Nexus devices like the Galaxy Nexus, Nexus S and Nexus 7, as well as some tablets like the Asus Transformer Prime, have been upgraded to Android 4.1. Once big-name handsets like the Samsung Galaxy S III and HTC One X get upgraded that number will jump significantly.

Check out all the details at Google Developers.