Remember Chameleon Launcher, that awesome Kickstarter-backed project for Android tablets that earned a lot of money before needing to be ignominiously shut down due to a administrative error and relaunch several weeks later with promises of a phone version? Phew.

Well, lo and behold, the Ottawa-based team at Teknision, led by the effortlessly energetic Gabor Vida, has launched a beta version of the tablet launcher to a select number of people. Unlike most betas, however, the app is not being distributed by messy proprietary APK files — the company has put it in the Play Store but it limiting its use to backers whose email addresses have been priorly registered with the company. I received my email last night but Teknision is smartly rolling out the invites piecemeal so as not to overload their servers. 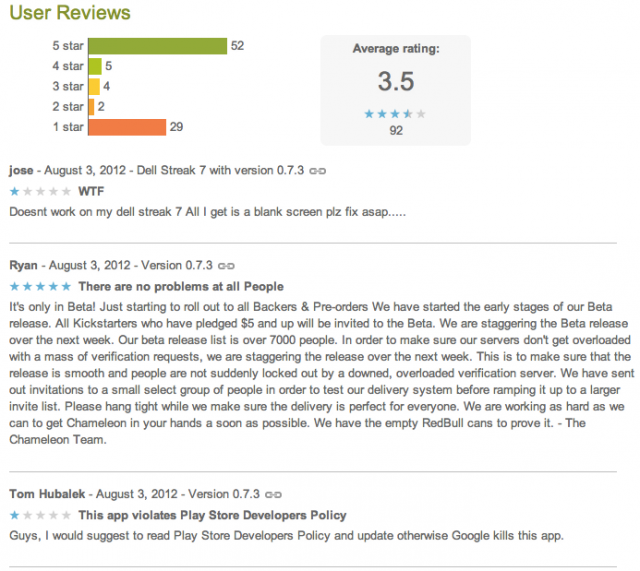 Unfortunately, judging from the 29 one-star ratings, most people don’t understand what a closed beta means. Teknision has been very forthcoming about the limited beta, and from what I can tell it being in the Play Store does not violate the Developer Policy at all. I couldn’t find mention of any abrogation for betas being distributed through the Store, though I would recommend Teknision puts “CLOSED BETA” in the title to prevent too much disappointment.

This also highlights a few of the limitations of the Play Store itself; Ryan from Teknision had no way of addressing the many one-star complaints (because the company has not been selected by Google to be a part of the pilot program for developers) so instead he had to post a response in the guise of a review.

We’re really happy that Chameleon is coming along — it’s one of the most exciting things to happen to Android tablets, period. When we’ve been granted access to the beta, we’ll be sure to talk all about it.