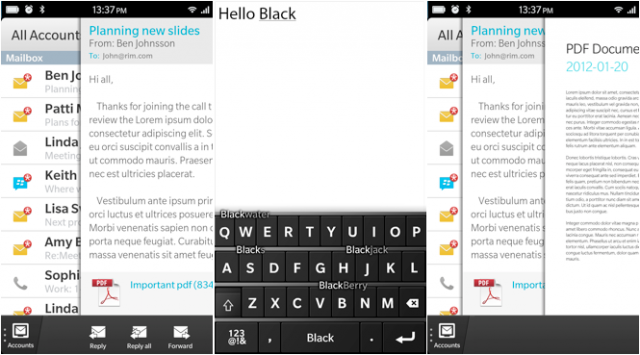 BlackBerry World 2012 kicks off today and the first press release it out. It was known that developers would be witnessing and also getting their hands on an alpha device running RIM’s new BlackBerry 10 OS, once known as once BBX, but today it was “officially launched.” In a press release RIM stated that the “toolkit is available in beta as a free download from http://developer.blackberry.com.” Unfortunately the link is not live yet or either are the screenshots to see what the OS looks like.

However, it’s known that BlackBerry 10 will be similar to the PlayBook OS and taking bits out of press release shows that “developers to create graphically rich, high performance native applications in C/C++ using Qt. The Native SDK for BlackBerry 10 has a rich set of APIs (Application Programming Interfaces) that give developers access to core device features and a range of BlackBerry application services, such as Push and Payment services… In this initial release of the BlackBerry 10 WebWorks SDK, developers have access to a core subset of the full WebWorks APIs, including Identity, Application and App events, System and system events.”

As for devices, as expected, the BlackBerry 10 “will run on BlackBerry 10 smartphones as well as BlackBerry PlayBook tablets when the new platform becomes available for the PlayBook.” RIM is still saying that “the first BlackBerry 10 devices are expected to launch in the latter part of 2012.”

Update: OK, the video is now up and so are the official screenshots. The demo of the OS looked simply amazing, actually very fluid and as Heins stated “flow”.

We’ll have more info and hopefully a hands on soon.