Lawyers and gods and Indian revolutionaries, oh my! 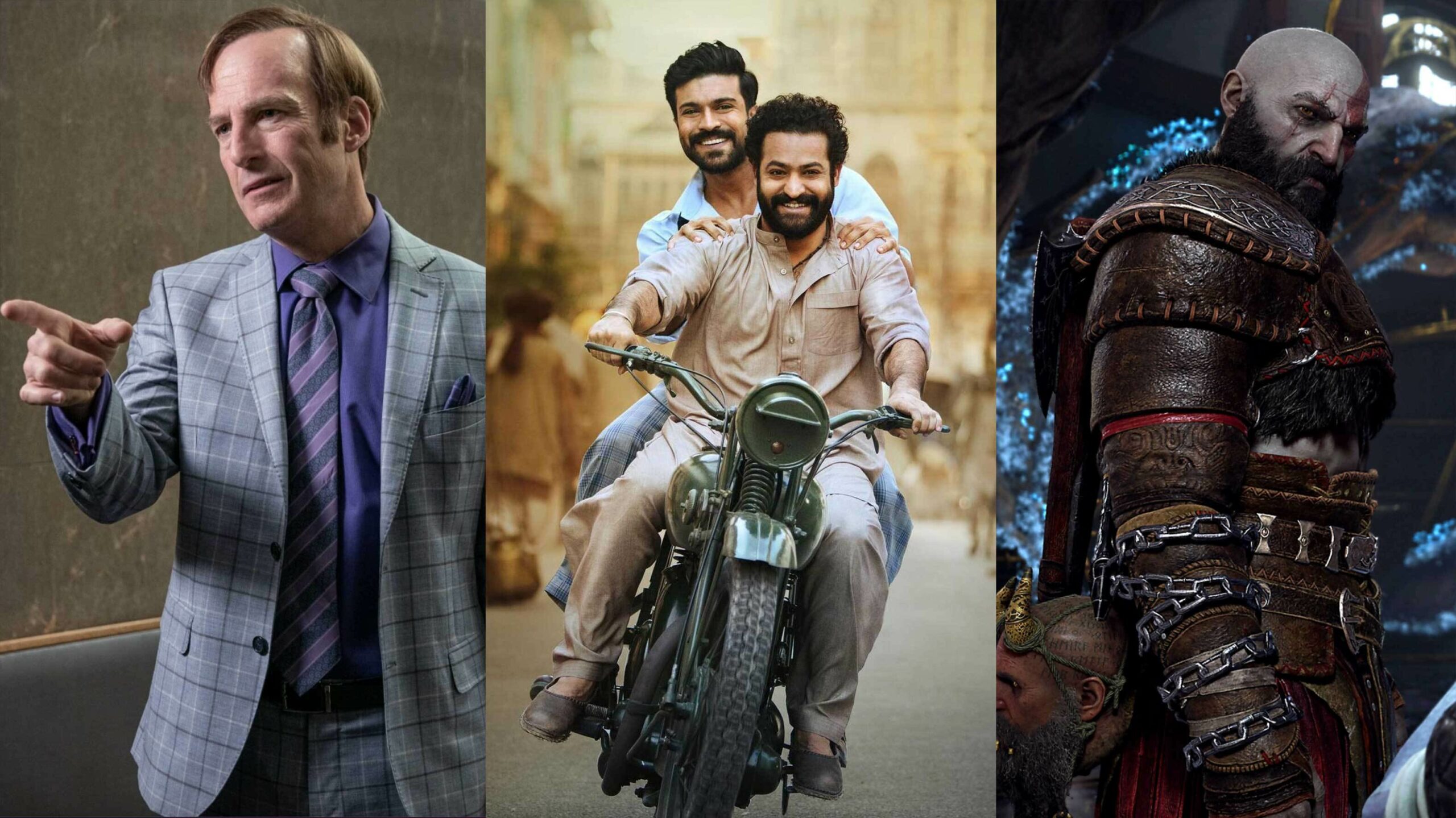 It’s the most wonderful time of the year: best-of lists. There’s just something oddly therapeutic about putting these together and celebrating the year that was with others.

In the case of MobileSyrup‘s traditional annual ‘Favourite Things’ lists, it’s a chance to write about subjects beyond the purview of tech. This can be anything, really, but I’ve always liked to structure mine around one entertainment title per medium to keep things interesting. And boy, was 2022 a great year in this regard. Whether it was the end of one of my all-time favourite franchises, a reintroduction to a wonderful subset of cinema or that time I bonded with Kratos himself, this year was quite memorable — here’s why. 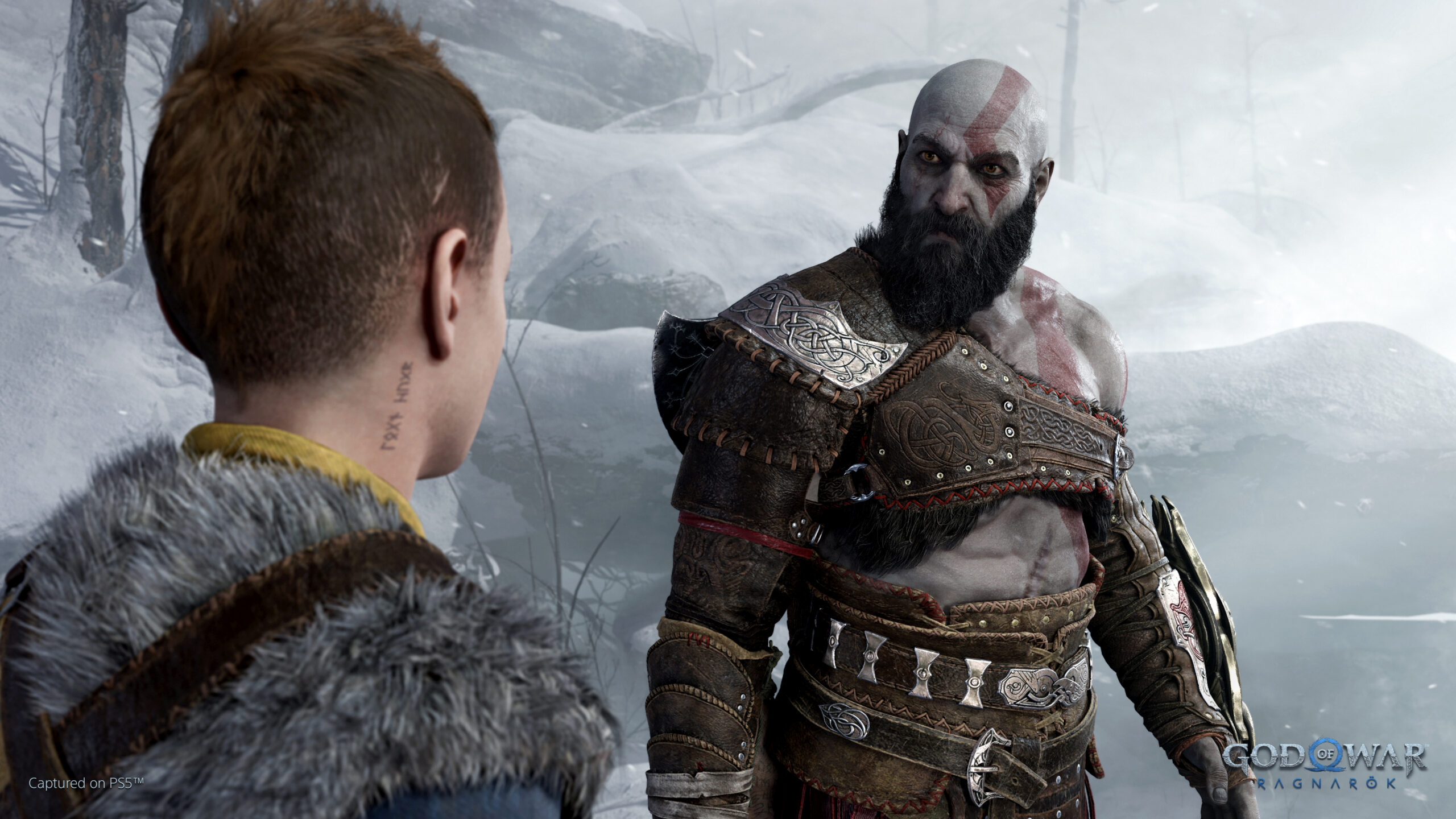 There are a lot of “father stories” in games, but God of War Ragnarök is easily my favourite. (Image credit: PlayStation)

I played around 50 new games this year, but God of War Ragnarök is easily my favourite. From its incredible and emotionally-charged narrative to engrossing and visceral combat, it’s a genuine masterpiece. But I’ve written about Ragnarök extensively at this point, and I’m not sure what else to say in regards to the game itself.

Instead, I want to touch on my experience following its release. Earlier this month, I wrote a personal essay about game’s central father-son story, which I related to more deeply than almost any other in gaming. Now, I was pretty nervous putting out that piece; I don’t talk about my “daddy issues” often, and I’d certainly never written about them publicly at length. Thankfully, the response to my piece was nothing short of incredible. First, Matt Sophos, Ragnarök‘s narrative lead, tweeted it alongside some lovely words. Having even one of the key creatives behind something so important to me saying such things was heartwarming and more than I could have imagined. And then he saw it.

Chris Judge — what a class act.

Yep, Kratos himself, Christopher Judge, saw Sophos’ tweet and shared his own response. I was stunned. His soulful performance across 2018’s God of War and Ragnarök — so intense and commanding, yet wonderfully soft and understated — resonated strongly with me, so to have him give what was easily the kindest and most profound response to anything I’ve ever written just moved me. Naturally, such exposure led to my piece blowing up a little bit, and I was elated to have so many people share stories about their own fathers and express gratitude towards Judge and me. Nowadays, people are so quick to be nasty online, especially when you express any sort of emotional vulnerability, but I was overjoyed to see such universally positive reception.

Oh, and the week later, I actually got to thank Judge in person at The Game Awards after he won Best Performance and delivered a lengthy-but-beautiful speech. (Shoutout to CGM‘s Dayna Eileen for getting his attention while I stood there meekly!)
Video games have such a uniquely powerful ability to bring people together, and my entire Ragnarök experience was the perfect example of that. 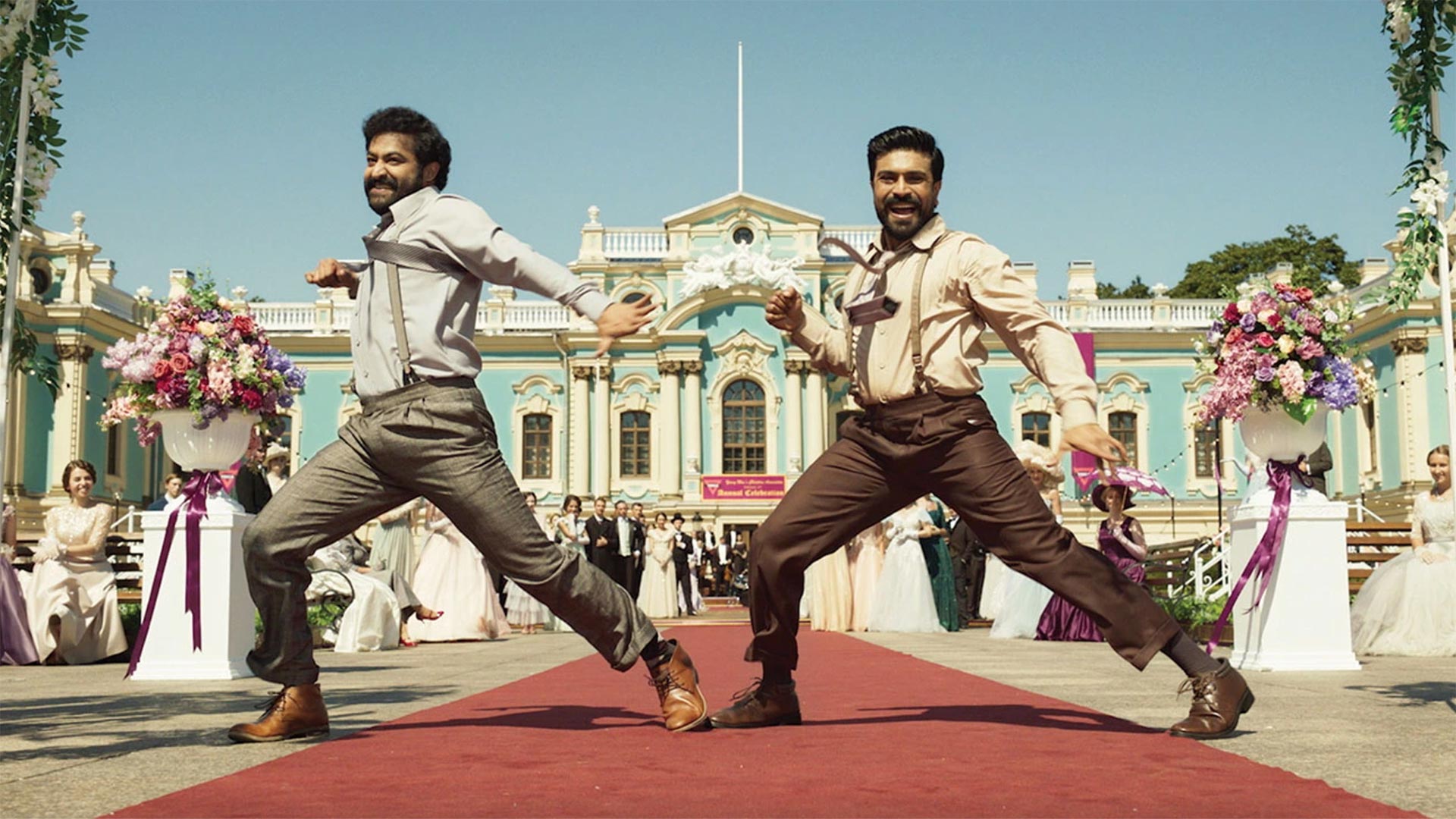 The “Naatu Naatu” dance number in RRR is the most purely joyful and smile-inducing scene in any movie I’ve seen all year. (Image credit: Variance Films)

In a sense, this was both the easiest and toughest decision to make, as there are so many films that could have taken this spot for me. Everything Everywhere All At Once for its tonally audacious exploration of generational trauma. Aftersun for its hauntingly beautiful exploration of a child’s empathy towards her struggling father. Marcel the Shell with Shoes On for being just so damn cute and heartwarming.

Ultimately, though, S. S. Rajamouli’s RRR encapsulates everything I love about movies. It has an utterly endearing friendship between Bheem (N. T. Rama Rao Jr.) and Raju (Ram Charan), a genuinely wholesome platonic pairing of two men unafraid to express raw emotion that feels so needed amid ongoing toxic masculinity. It has an incredible, delightfully over-the-top action setpieces that mix practical and visual effects in such a convincing way that it puts most of Hollywood to shame. It even has outstanding, make-you-get-up-and-dance-in-the-theatre-worthy musical sequences, including the absolutely rousing “Naatu Naatu.”

But beyond all of that, RRR actually had me feeling rather wistful. Growing up, much of my time with my dad’s side of the family consisted of watching Bollywood movies, and I have fond memories of watching them. That said, I’ve steered clear of those kinds of movies because I’ve since fallen out with that family and there’s baggage there. Watching RRR, however, I was reminded that there’s an entire world of Indian cinema that I’ve been missing out on. In many ways, I felt exactly like I was living out the Ratatouille meme, and that was just icing on the cake for such a joyful and thrilling movie.

Honourable mentions: Aftersun, Everything Everywhere All At Once, The Banshees of Inisherin, Marcel the Shell with Shoes On 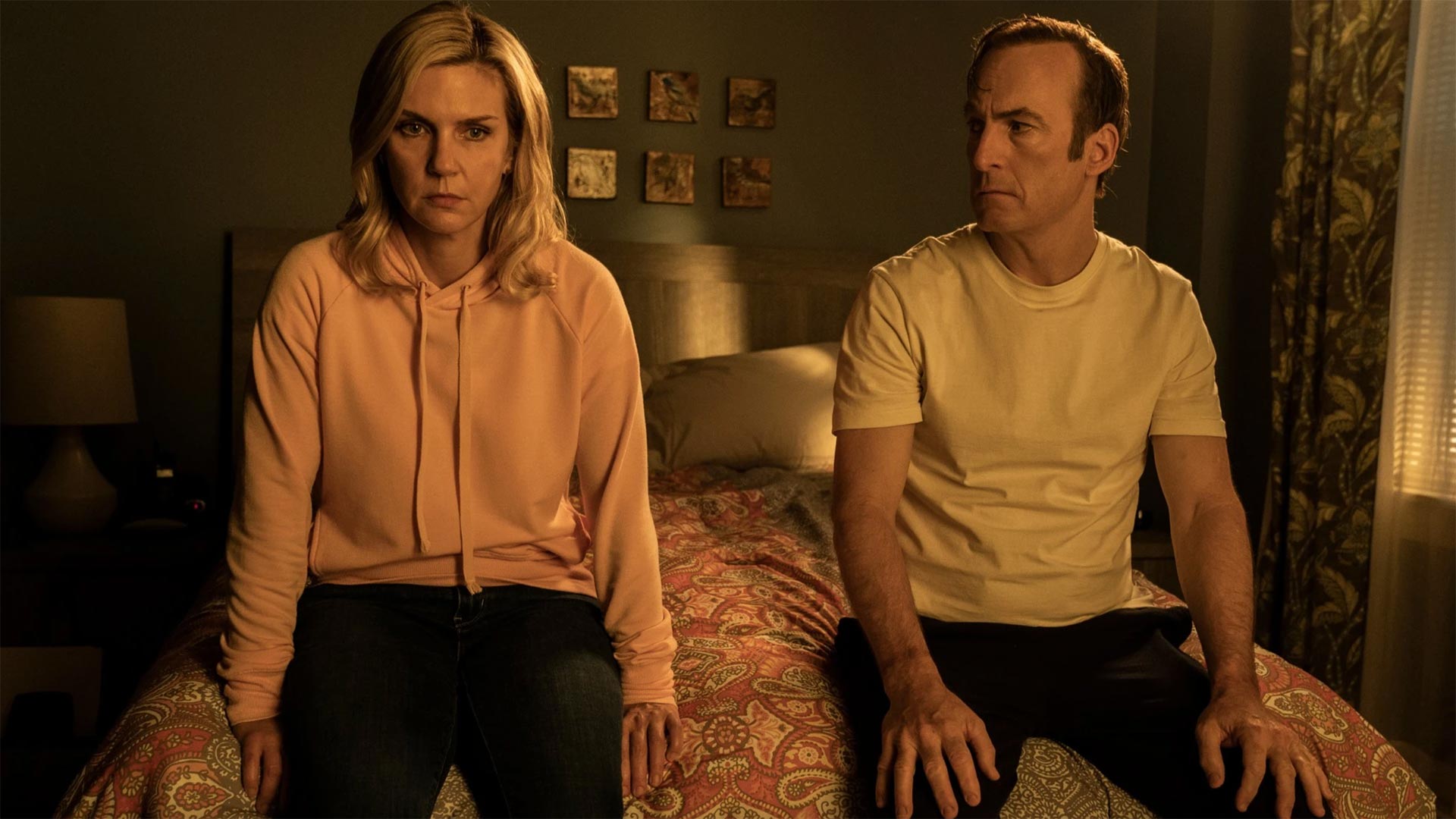 The relationship between Jimmy and Kim is the beating heart of Better Call Saul. (Image credit: AMC)

When people used to argue whether Better Call Saul was better than Breaking Bad, I would steadfastly stick with the latter, my all-time favourite series. But by the end of the Breaking Bad prequel’s six-season run, I am happy to say, definitively, that it’s easily better.

Sure, it has everything you loved about Breaking Bad — the rich plotting, stunning cinematography, top-notch performances and exquisite antihero characterization. But it does all of that and more. In a feat of utter brilliance, co-creators Vince Gilligan and Peter Gould took a clownish supporting character, Bob Odenkirk’s Saul Goodman, and made him more layered and interesting that Walter White. If Walt was a time bomb, Jimmy was a man in quicksand, slowly sinking while trying to claw himself out, and making his morality struggle even more fascinating as a result. Nowhere was that more apparent than in Season 6, where we see how Jimmy’s past failures inform where he ends up in the show’s post-Breaking Bad scenes. Through sharp writing and Odenkirk’s masterfully complex performance, Jimmy remains sympathetic even at his lowest, and it made for some gripping television.

And best of all, Jimmy’s not even the best character — that would be his partner, Kim Wexler, brought to life through a criminally overlooked, awards-worthy performance by Rhea Seehorn. Like Jimmy, her innate decency is put in constant conflict with a surprising mischievous side, and the ways in which she struggles with that are captivating. Fans knew going in that she’s not around come the events of Breaking Bad, but Gould, Gilligan and co. ensure that the directions they take her in are always far more compelling than you might have expected. All the while, supporting characters like Howard (Patrick Fabian), Nacho (Canada’s Michael Mando) and Breaking Bad favourite Mike (Jonathan Banks) go through their own surprising-yet-satisfying arcs. That’s to say nothing of Lalo (Tony Dalton), a dastardly charming villain who proved a brilliant foil to Giancarlo Esposito’s more measured Gus Fring.

After nearly 15 years, it seems like Gilligan and Gould are ready to leave Albuquerque behind with Better Call Saul, but man, what an unforgettable ride it’s been.

Honourable mentions: Severance, Andor, The Afterparty, Under the Banner of Heaven

#TheMoviePodcast team had the honour of attending the The Lord of the Rings: #TheRingsOfPower Los Angeles red carpet and premiere.

Thank you to @PrimeVideoCA for the opportunity. Stay tuned for all our coverage and junket interviews very soon. @LOTRonPrime arrives September 2. pic.twitter.com/7RFT9kdGmn

One of the good things to come out of COVID for me was the discovery of more podcasts in my free time. One of my favourites of these has been The Movie Podcast, hosted by Daniel, Shahbaz and Anthony. The gents are all likeable and share a winsome rapport as they produce reviews, interviews and more on movies and TV, making every episode a real treat.

But what I most admire is how much they’ve built up the show this year. This started off as an independent passion project from a few Canadian boys, and it’s grown into something much bigger and more impressive. I’m in awe of the opportunities that have come their way as the result of their hard work, including interviews with the likes of Canada’s Hayden Christensen and Deborah Chow (Obi-Wan Kenobi) and Iman Vellani (Ms. Marvel), as well as Ewan McGregor and Ethan Hawke (Raymond & Ray), Sam Raimi and Michael Waldron (Doctor Strange in the Multiverse of Madness), almost the entire Mythic Quest cast, Michael Giacchino (for both Werewolf by Night and Lightyear), Brendan Fraser (The Whale) and many more. As someone who’s been trying to do more interviews lately, I find their journey truly inspiring, and I’m excited to see what they do in 2023.

Book: We Were Dreamers: An Immigrant Superhero Origin Story

Guys I think I made finally made her proud pic.twitter.com/EnC4mvyfiV

At first glance, it might be weird to see a 33-year-old writing a memoir, especially less than a year after leading a Marvel movie. But We Were Dreamers: An Immigrant Superhero Origin Story, isn’t really about Simu Liu. Instead, the Canada-raised actor uses the book to pen a lovely, inspiring tribute to his parents, who emigrated from China when he was just four years old with hopes of a better life, which, in turn, paved the way for him to become Shang-Chi.

If there’s one theme among my more personal writing lately, it’s the idea of a young adult looking back on their formative years to gain a more nuanced and empathetic perspective on the people who populated it. That’s We Were Dreamers to a tee — Liu reflecting on his many early conflicts with his parents to come to a deeper appreciation for everything they did. It’s Liu being far more mature, earnest and funny than the Twitter folk who routinely hate on him for stupid years-old comments would lead you to believe, and it makes for an engrossing read. (The anecdotes about his life as a struggling actor and work on the likes of Kim’s Convenience are also quite fun.)

Above all else, though, We Were Dreamers also got me thinking more about my own family. My dad’s side came to Canada from Guyana when he just a few years old, while my mum’s parents were in their early ’20s when they came from Scotland. That’s something I, who’s only ever known Canada as home, have always taken for granted — that terrifying uprooting of your entire life on what’s effectively a colossal gamble in a completely different place. As a result, I found myself more grateful and proud — not only of what they went through, but the countless immigrant families who have done the same. We could all use a little more empathy in this world, and I’m grateful for Liu’s book for giving me just that.

Honourable mentions: I didn’t read too much this year, admittedly, so I’ll shout out Reggie Fils-Aimé’s Disrupting the Game