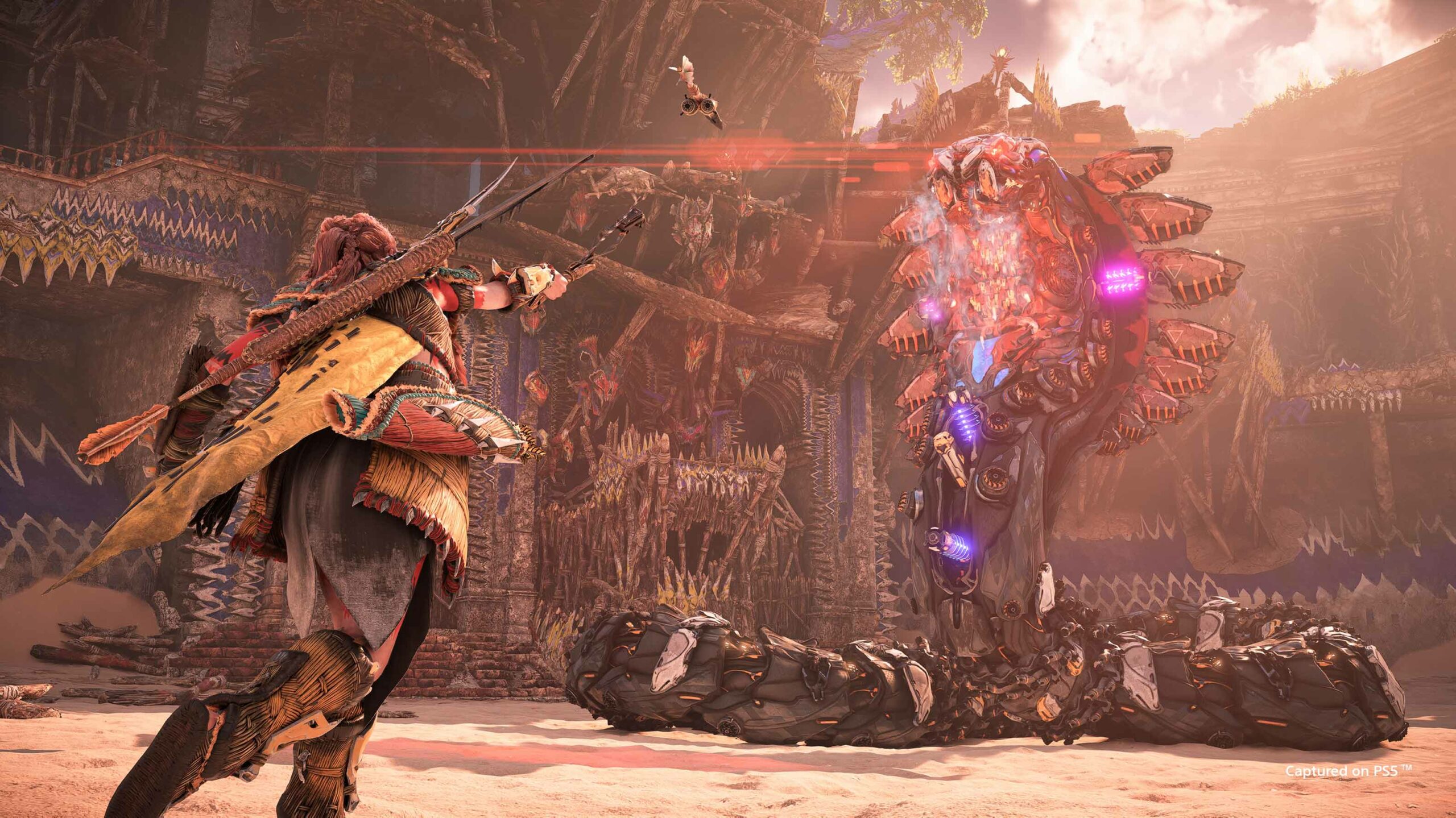 There’s a scene in Horizon Forbidden West where protagonist Aloy and her companions are racing off on their machine mounts on a desperate mission. A rousing vocal piece plays as Aloy exchanges an uncertain-yet-determined look with one of her friends.

The end is near.

Despite its brevity, this moment has stuck with me since I’ve beaten the game. Over the course of my 30-plus-hour journey with these characters, I found myself truly caring for them all — something I admittedly never quite felt for the game’s predecessor, 2017’s Horizon Zero Dawn, beyond Aloy herself.

But that’s also emblematic of developer Guerrilla Games’ broader successes with Forbidden West. In the sequel, the Dutch studio has taken everything that worked about the original — an overall really good game that nonetheless took me several tries to get into and finish — and improved upon it in every way. In so doing, it’s created an experience that ranks not only as an early 2022 Game of the Year contender, but among PlayStation’s very finest titles.

In Horizon Forbidden West, Aloy must travel to a dangerous new frontier to locate the source of a plague that’s killing all life. It’s a strong premise that instills the narrative with a sense of urgency that the first game, which understandably had to spend many hours introducing you to the world, didn’t always have. Aloy’s quest, which is filled with emotional twists and turns, proves to be quite moving, especially in the final hours. Seeing her continue to grow from naïve outcast in Zero Dawn to a renowned hero who people now look up to makes for a genuinely lovely character arc, and the sharp writing and Ashly Burch’s strong performance help bring it to life quite wonderfully.

Where the narrative also greatly succeeds is by expanding upon Zero Dawn‘s richly crafted post-apocalyptic, machine-overridden lore in many fascinating ways. Between the likes of the deadly Tenakth who dominate the Western region, the Agrarian, religious Utaru tribe and the desperate-but-misguided Quen foreigners, Forbidden West never stops introducing new and interesting factions. All the while, you’ll meet compelling characters like the hardened warrior Kotallo, the plucky researcher Alva and the charming showman Morlund. Returning characters, such as Erend and Varl, also really shine here. 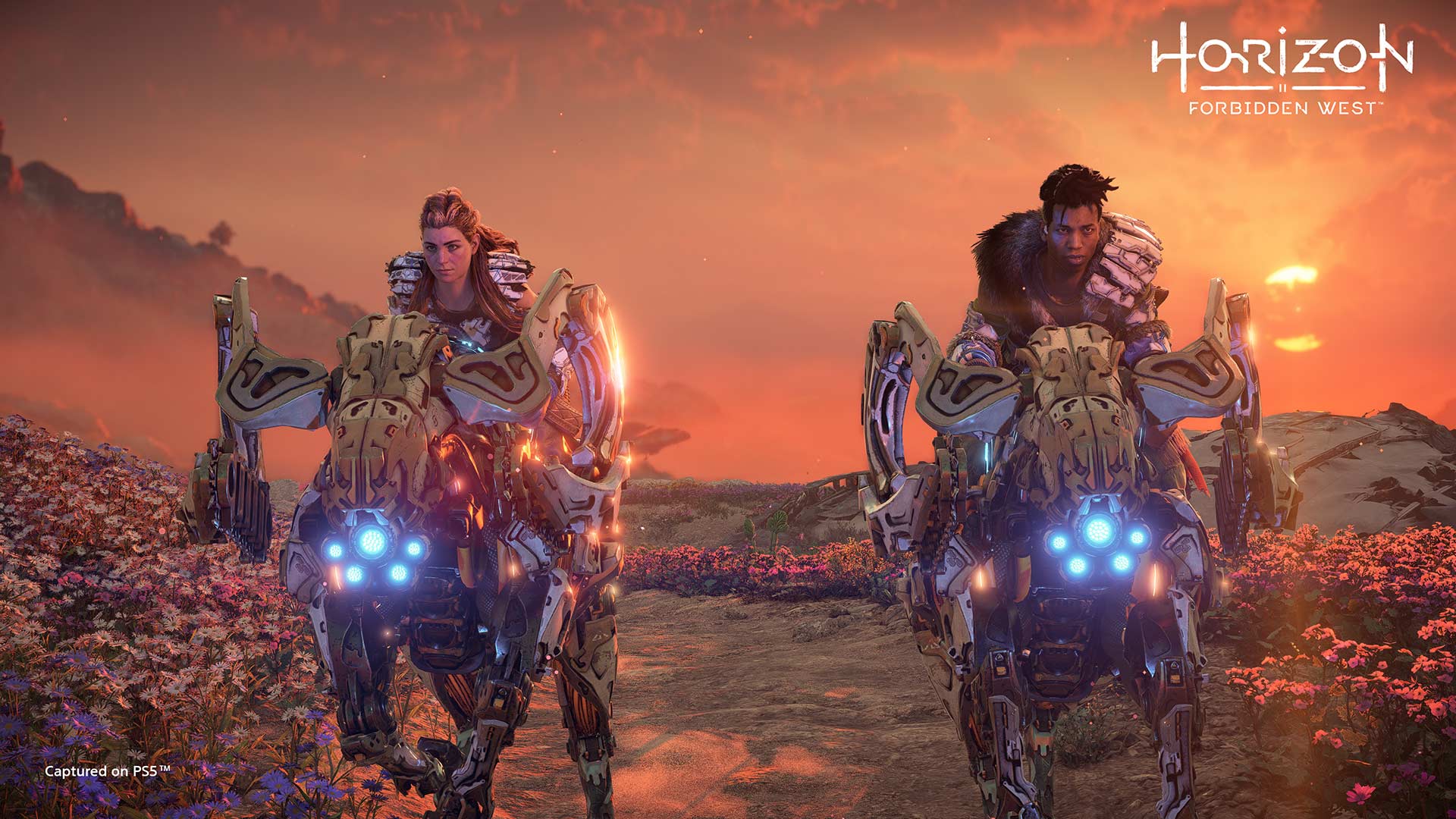 Despite having just beaten Zero Dawn a few weeks ago, I can’t honestly say that cast made much of an impact the first time around. In Forbidden West, though, all of the characters are fully developed in their own right and made even better through believable, endearing relationships with Aloy. This is especially true thanks to a base that you can return to between missions to talk to your allies, Mass Effect style. Having this meaty amount of additional well-written and acted banter between Aloy and her companions really does help them grow on you all the more.

The only downside to Forbidden West‘s narrative is that it’s perhaps too ambitious; by juggling so many threads, some are done a disservice. For instance, Lance Reddick’s Sylens was easily Zero Dawn‘s most compelling character outside of Aloy, thanks to his morally ambiguous pursuits of knowledge. However, he’s bafflingly absent for large chunks of Forbidden West‘s story, which takes away from some of the intrigue. His biting rapport with Aloy was also engrossing, and it would have been good to have more of that here outside of the early and late-game hours.

A lack of screen time isn’t an issue that’s exclusive to Sylens, either. Given the talented, big-name actors performing them, you’d expect antagonist rebel leader Regalla (Angela Bassett) and enigmatic figure Tilda (Canada’s own Carrie-Anne Moss) to feature more prominently, but they, like Sylens and some other antagonists I won’t spoil, largely take a backseat for much of the game. 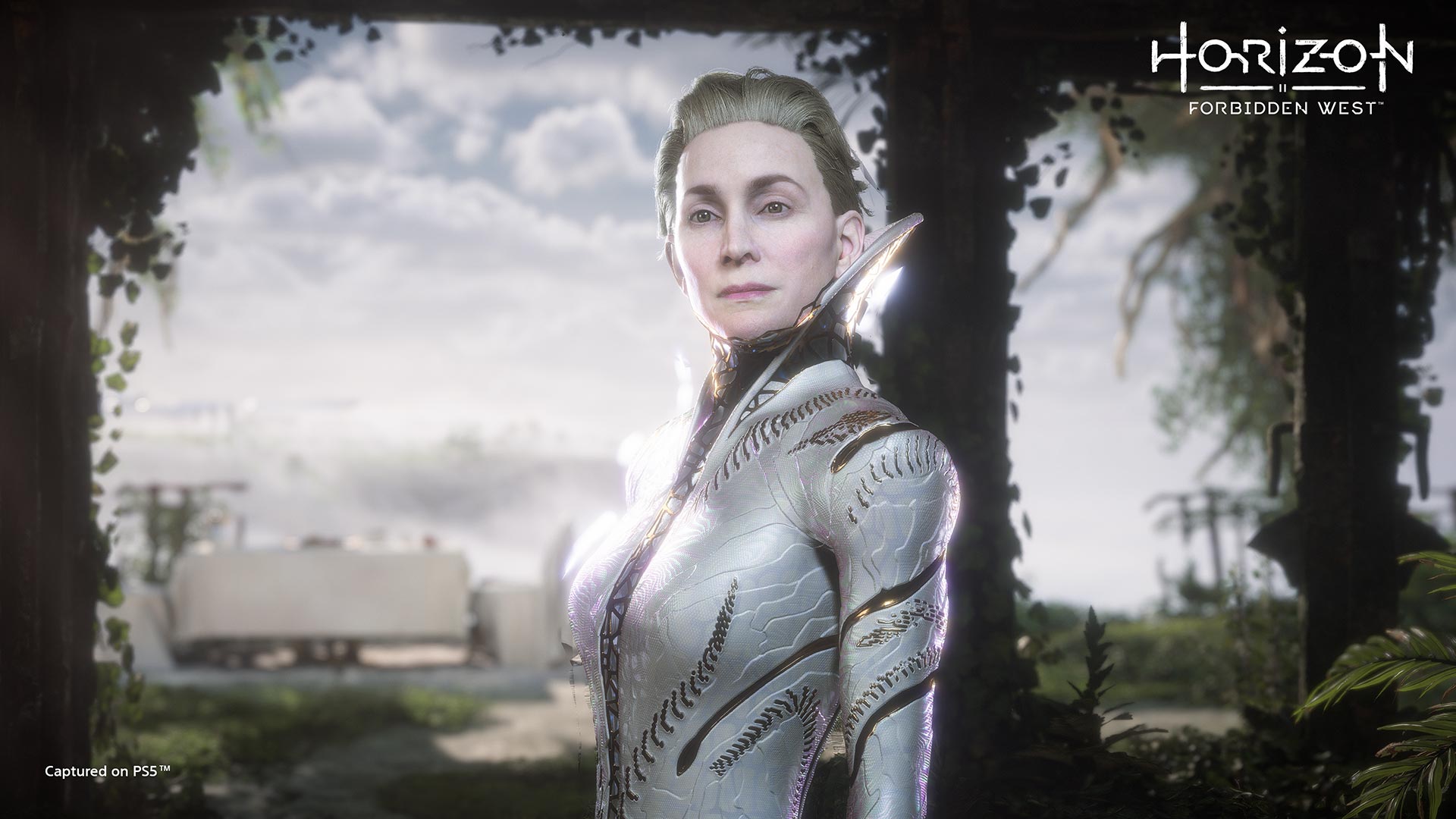 This results in a somewhat awkward overload of exposition and “master plan” reveals in the final stretch, although it’s ultimately worth it as many of these previously underdeveloped characters are eventually given more satisfying and impactful roles. All of this culminates in a thrilling and emotional conclusion that cements Aloy as one of PlayStation’s all-time best characters. 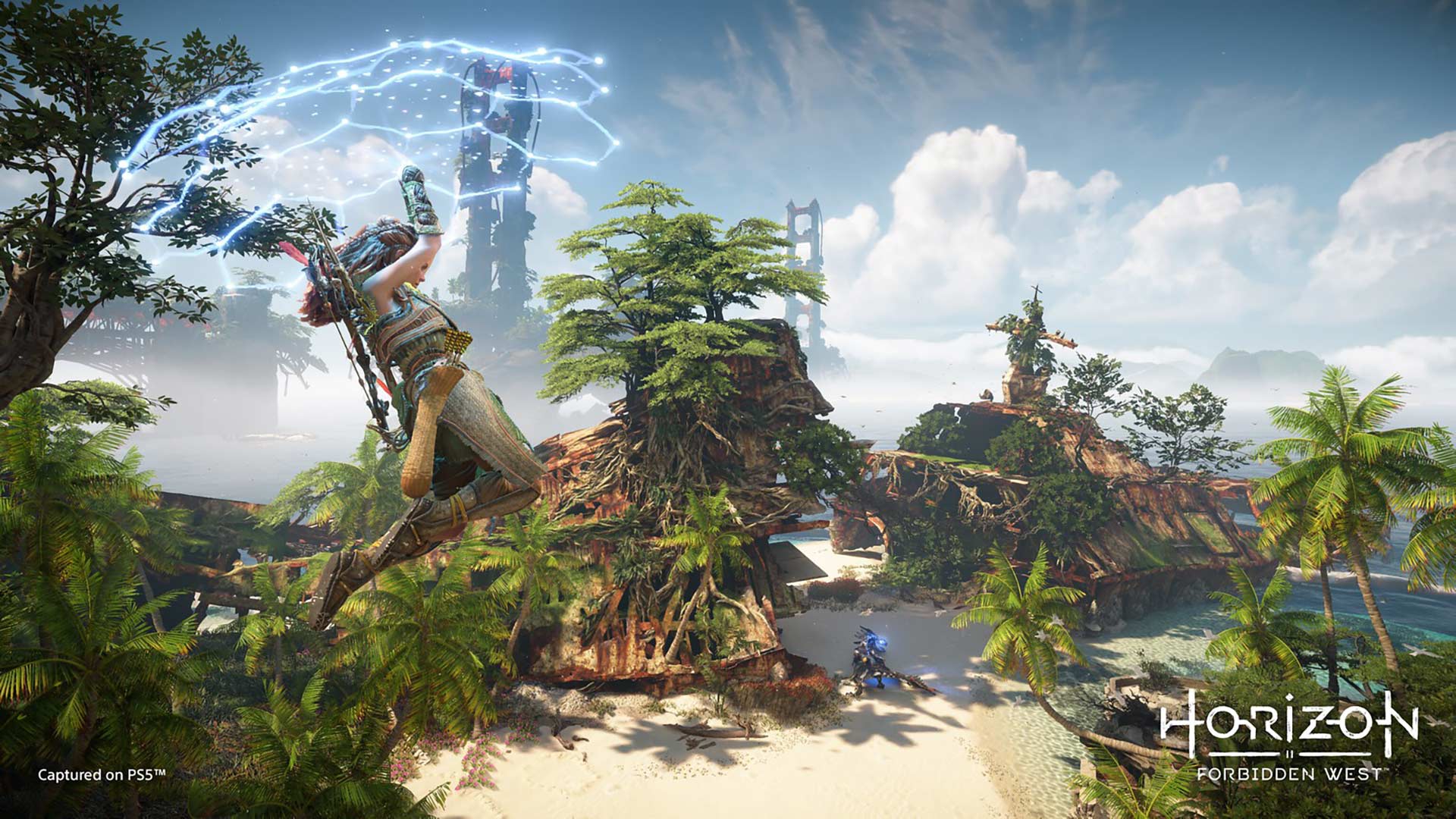 But it’s in Forbidden West‘s gameplay that the improvements are more heavily felt. Shortly into the game, it becomes clear that Guerrilla paid close attention to feedback from Zero Dawn to make meaningful changes across the board in the sequel. These are first evident in general quality-of-life tweaks that are greatly appreciated in how they cut down on some of Zero Dawn‘s tedium. Scanning an enemy once now reveals all weak points, rather than forcing you to monotonously hover your marker over each part of them. Resources like herbs can be picked up while riding a machine so you don’t have to dismount every single time.

But it gets even better. Mercifully, you now have a Stash that’s accessible at towns and some campfires in which excess resources are stored — no need to constantly clear space in your pack every time. And making navigation even better? An unlockable Breath of the Wild-esque ‘Shieldwing’ glider, which improves traversal in ways that really can’t be understated. Indeed, I adored this inclusion most of all, as Zero Dawn forced you to find specific rappel points or climbing spots to descend, which proved consistently frustrating and generally stifled exploration to a degree.

The most extensive overhaul, though, has definitely been made to melee combat. In the first game, the core bow mechanics were tight and responsive, but Aloy’s staff attacks were comparatively clunky and basic. Now, though, she’s actually got several combos that mix up light and heavy attacks, plus improved sound design and, on PS5, DualSense feedback to give strikes that extra oomph. Charging a heavy attack with R2 as the controller emitted an intense vibration and releasing to have Aloy lunge forward and strike the ground with camera-shaking ferocity never stopped feeling satisfying.

What’s more, combat’s been tightened up all across the board. Besides returning weapons like your ever-handy bow, ‘Tripcaster’ and ‘Explosive Blastsling,’ Forbidden West introduces several other fun new toys — my personal favourites being javelin-like Explosive Spikes and buzzsaw-esque Shredder Gauntlet. These types of weapons spruce up your ranged arsenal quite nicely, but Guerrilla has also smartly introduced Smoke Bombs to offer you additional stealth options.

When fights got hectic (and they definitely will, given the game’s sometimes frustrating penchant to throw bunches of enemies at you), I loved being able to lob a Smoke Bomb to make a quick strategic retreat and gather my bearings. If that’s not an option, Aloy’s new ‘Pullcaster’ tool will zip you to higher vantage points, adding a nice level of verticality to encounters that wasn’t in Zero Dawn. That the Pullcaster can be used in tandem with the Shieldwing to launch yourself off specific points to get you airborne just sweetens the deal. 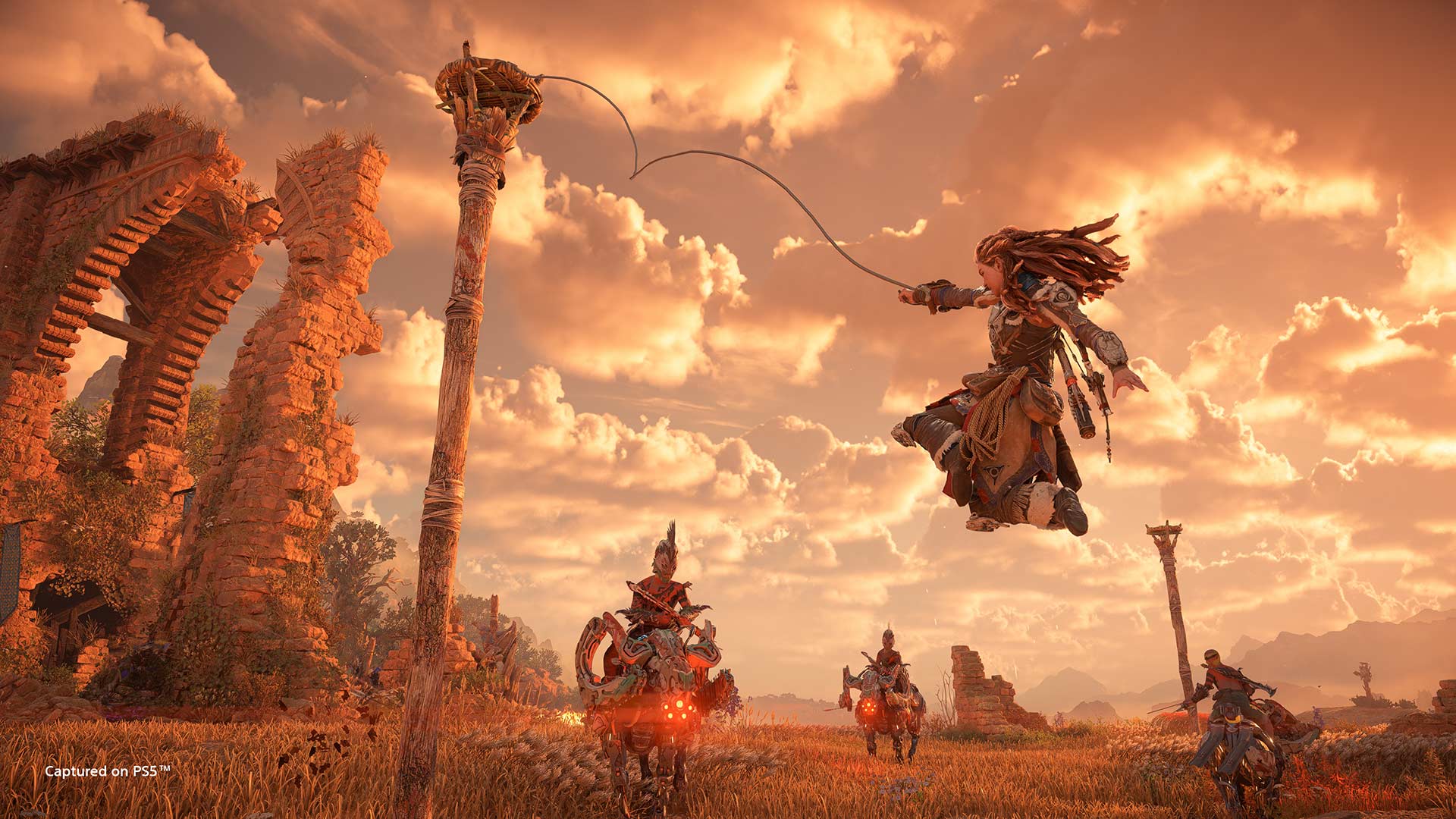 Combat becomes even more dynamic thanks to deeper skill trees which, alongside modifications, will allow you to enhance your staff and other weapons. The highlight of these are metred ‘Valor Surge’ and ‘Weapon Technique’ moves; some of my favourites include the ‘Toughened’ Valor Surge for major healing and stat boosts, and the ‘Power Shredder’ Weapon Technique to turn my Shredders into explosive discs. You can only have one Valor Surge equipped at a time, so it ostensibly functions like a useful-yet-balanced “Super Move,” while each weapon type has its own Techniques. Given the larger lineup of wickedly cool new machines that you’ll encounter — including the frighteningly agile Slitherfang and powerhouse Tremortusk — you’ll definitely want to experiment with all of the clutch Techniques.

Thankfully, I found myself regularly earning Skill Points and other useful resources to aid with Aloy’s progression. That’s because, to my surprise, I actually found myself completing many of the game’s sidequests. I say that because Zero Dawn‘s optional content — which featured too many fetch quests and “scan this footprint/blood trail and follow the tracks” gimmicks — wore thin quickly. Fortunately, overall quest design is massively improved in Forbidden West, with sub missions at once being more character-driven and distinct from one another.

In one instance, I helped an old friend from Zero Dawn search for a missing lover, and in another, I got to play detective in a murder mystery. But some sidequests focus on the sweeter, quieter moments, as well, like Aloy sharing a drink with another familiar face.

Outside of sidequests, there is a slew of enjoyable optional activities to tackle in the massive, dense and geographically diverse Western region. A real standout is Machine Strike, a Warhammer-esque board game that can be played with NPCs throughout the world. You’ll come across better pieces and more challenging opponents over time, which makes the already solid minigame all the more enticing. Relic Ruins, meanwhile, are light puzzle rooms located in neat “Old World” locations like hotels, which simultaneously offer gameplay variety and flesh out the lore. 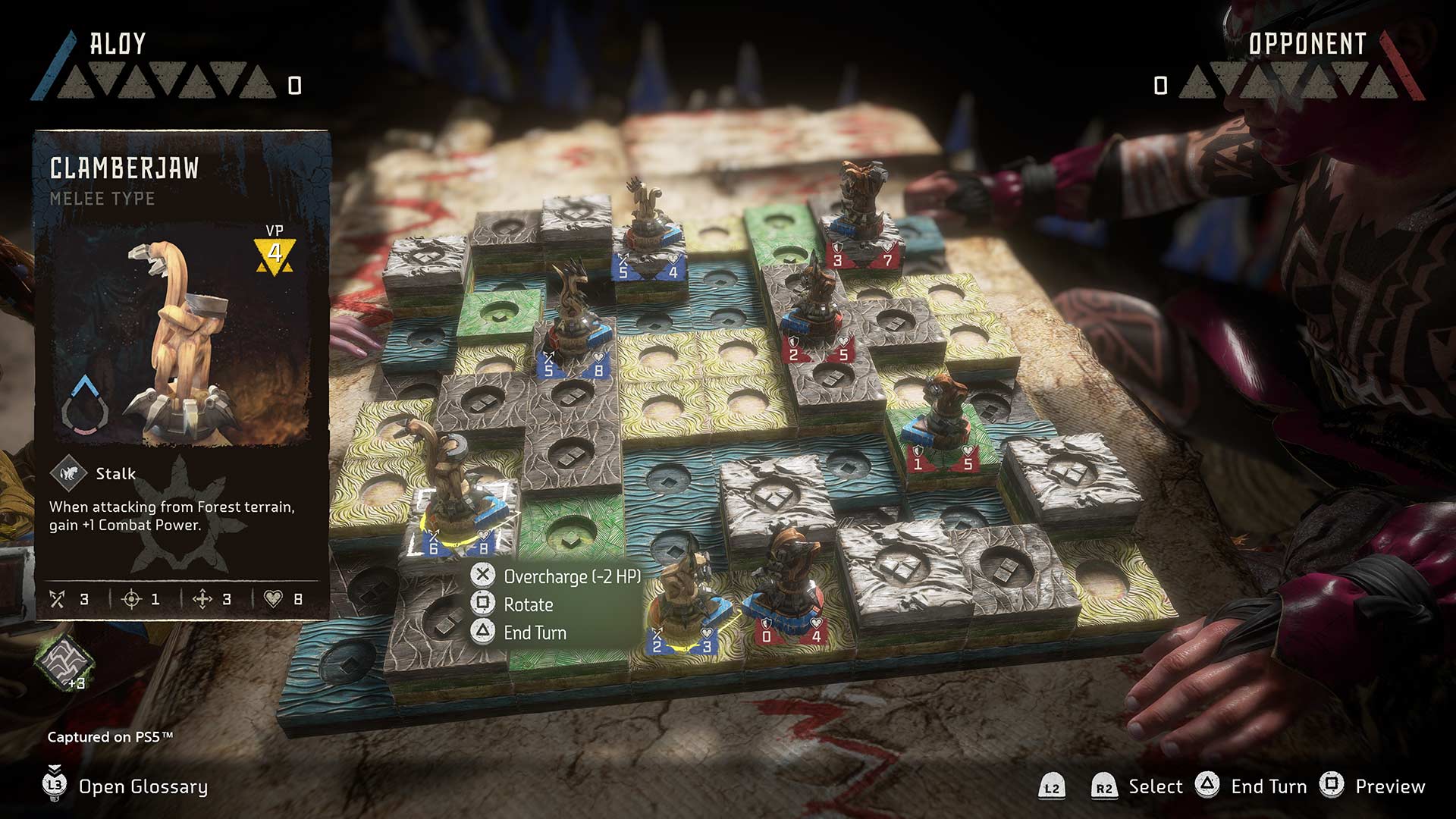 Even the returning Tallnecks, which are effectively “Ubisoft Towers” to fill out your map, are far more elaborate. In the first game, you just had to find a spot high enough to jump onto them, but now, there are lengthier platforming sections — much more engaging this time around thanks to both expanded climbing options like backwards jumps and the Pullcaster — and other obstacles to clear. There are even fully explorable underwater sections to cement Forbidden West‘s world as a thoroughly exciting sandbox to play in and explore.

Simply put, Forbidden West is absolutely gorgeous, even on the PS4. The luscious forests, sprawling deserts and coastal fronts are sights to behold in their own right, but the PS5’s higher detail textures make them pop even more. The power of the SSD is also extremely noticeable, regularly allowing for fast travel in under five seconds — even before the loading screen had fully appeared, no less. 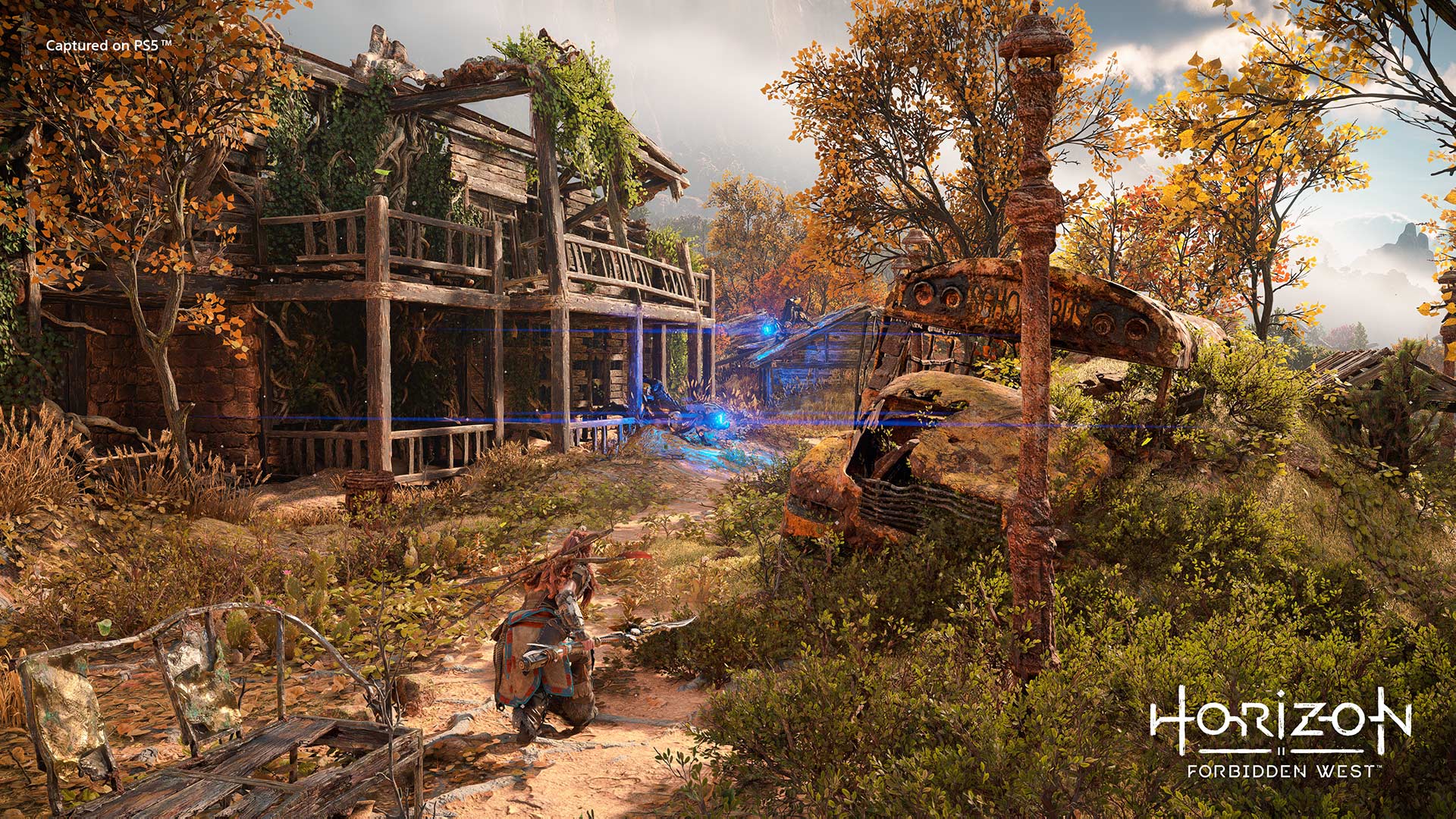 But it’s the 60fps Performance Mode — which sees the graphics take a slight-but-not-drastic hit — that’s a real gamechanger. Forbidden West‘s fast, balletic combat and refined climbing mechanics look and feel so much better with the smoother frame rate. Throw in the aforementioned punchy DualSense enhancements and your moment-to-moment control of Aloy is just splendid on PS5. Impressively, Forbidden West is also quite polished on PS5, especially for a game of this size; outside of a few crashes that should be fixed in a day one patch, I encountered very few bugs, and none that impacted my experience in any negative way.

A masterful start to PlayStation’s 2022

Horizon Forbidden West is the perfect video game sequel; it takes a well-regarded new IP and builds upon its foundation in so many meaningful ways. From a more emotional narrative and an exceptional cast of characters to richer, more extensive combat options and superior side content, Forbidden West is practically everything I could have wanted. Horizon Zero Dawn was a really good game that nonetheless took me many tries to finally get into and beat, but Forbidden West is one that I just couldn’t put down. Whether you have a PS4 or PS5, this is an excellent, must-play experience.

Horizon Forbidden West launches exclusively on PlayStation 4 and PlayStation 5 on February 18th. It is available to pre-order off of the PlayStation Store, Best Buy and Amazon for $79.99 (PS4) and $89.99 (PS5).