The event starts at 10am ET/7am PT 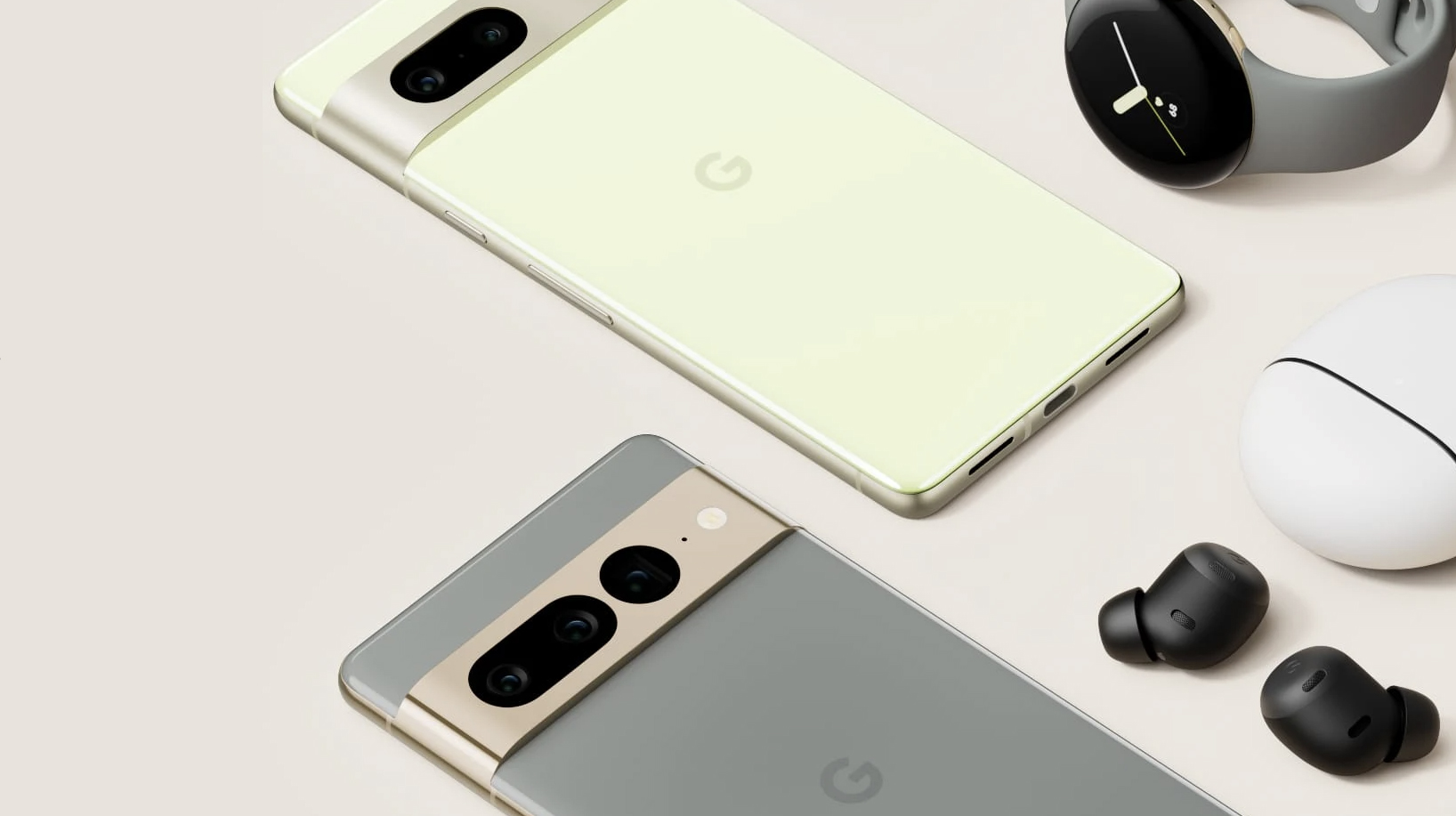 The tech giant hasn’t kept entirely quiet about what will be shown off at the event, and we’re expecting to see three already-unveiled devices: the Pixel 7, the Pixel 7 Pro and the Pixel Watch. It’s possible we might even learn more about Google’s rumoured Pixel Tablet, but at the moment, this is only speculation.

Let’s take a look at everything Google will likely show off at its upcoming keynote.

What we know for sure

At Google I/O, Google revealed the Pixel 7 Pro’s rear and confirmed several details about the handset. During the keynote, we learned that the Pixel 7 Pro features a cool striking visor with an aluminum finish. The phone will launch in ‘Obsidian,’ ‘Snow’ and ‘Hazel’ colours. Additionally, it will come with Android 13 and the next generation of Google’s Tensor chip.

We also recently saw the front of the device. Images posted to the Pixel Superfans Facebook page show the front and back of the device, along with a more subtle display curve.

Further, we know that the Pixel 7 Pro will sport three camera sensors, but it’s unclear what their exact specs are.

Google recently announced that pre-orders for the Pixel 7 Pro will open on October 6th, the same day as its hardware keynote.

Unbox Therapy got an early hands-on with Google’s upcoming flagship, revealing several new details about the smartphone. For example, the Pixel 7 Pro features 12GB of RAM and sports 256GB. The smartphone is also slightly thinner and wider than the Pixel 6 Pro, but it’s practically the same size as the 6 Pro. Further, the Pro model features a polished finish on the edge of the handsets.

The device’s U.S. pricing will also remain roughly the same, according to Android Police founder, Artem Russakovskii. The Pixel 7 Pro will reportedly cost $899.99 USD, the same as the Pixel 6 Pro cost at launch. That should mean the 7 Pro will cost around $1,179 CAD in Canada, just like the Pixel 6 Pro.

The Pixel 7 Pro will reportedly sport the same front-facing camera, powered by an 11-megapixel Samsung 3J1 sensor, according to Kuba Wojciechowski. Wojciechowski also tweeted that the Pixel 7 Pro’s telephoto zoom camera will include a Samsung GM1 sensor instead of the Sony IMX586 found in the 6 Pro. Further, they say that the Pro could sport the same Samsung GN1 primary sensor and IMX381 ultra-wide sensor that was in the 6 Pro.

What we know for sure

At Google I/O, Google also showed off the Pixel 7’s rear and revealed more detail about the handset. At the event, we learned that the Pixel 7 features a striking visor with an aluminum finish housing two shooters. The phone will launch in ‘Obsidian,’ ‘Snow’ and ‘Lemongrass’ colours. It also comes with Android 13 and Google’s second-gen Tensor chip.

Google recently announced that pre-orders for the Pixel 7 will open on October 6th, the same day as the hardware keynote.

The Pixel 7 will sport 8GB of RAM and 128GB of storage and come with a matte finish. The Pixel 7 is reportedly more comfortable to hold than last year’s Pixel 6, according to Unbox Therapy.

On the other hand, the Pixel 6 is taller than the new Pixel 7 and features a smaller chin bezel.

The Pixel 7 is rumoured to sport the same Samsung GN1 primary sensor and IMX381 ultra-wide sensor as what’s in Pixel 6. Further, the Pixel 7 will feature a new front-facing camera, the 11-megapixel Samsung 3J1 available in the 7 Pro.

The handset is rumoured to cost $599 USD, the same as the Pixel 6 cost at launch. Again, that should mean the Pixel 7 will cost around $799 CAD in Canada, just like the Pixel 6. The device is expected to release on October 18th.

The smartwatch was revealed in a 51-second video (above) Google posted to the ‘Made by Google’ YouTube channel. It showed off the wearable from various angles alongside several watch faces.

The clip showcases the wearable’s rotating crown, its thickness, the curved glass top, the middle case and the bottom sensor layer. We get a look at where the band attaches to the watch, followed by another view revealing the smartwatch’s band.

The wearable is tipped to sport a 300mAh battery, which should last all day.

Additionally, the Pixel Watch is rumoured to start at $349.99 USD (roughly $465 CAD). Further, the Wi-Fi Pixel Watch will be available in ‘Black/Obsidian,’ ‘Silver/Chalk,’ and ‘Gold/Hazel.’

The cellular model features the same design, except instead of Chalk, it’s available in ‘Silver/Charcoal.’ The second word — Obsidian/Chalk/Hazel/Charcoal — refers to the colour of the band, while the first is tied to the watch case.

We recently got a leaked look at the retail box of the watch. Further, the Pixel Watch is expected to be available for pre-order on October 6th, but may not be on sale until November 4th.

Big screen, big changes. We’re optimizing the Android experience for larger tablet screens. 20+ Google apps will get makeovers so they’re easier to use and easier on the eyes. Many of your other fave apps are getting updates too. #GoogleIO pic.twitter.com/qbfs0DLkZM

Google said its Pixel Tablet is coming in 2023, but it’s possible the company might show off more of the tablet beyond the animation we saw at Google I/O.

This new tablet will run on Google’s Tensor chip, just like the Pixel 6 series. The handset is poised to sport a big screen with 20-plus apps getting makeovers.

The tablet is rumoured to come in 128GB and 256GB models and feature Wi-Fi 6. Additionally, the device will feature a 10.95-inch display, which will be marketed as 11 inches. The display will also sport the USI stylus standard.

The tablet will reportedly double as a detachable display for the Nest Hub and be Wi-Fi only, and also feature two cameras (both of them IMX355), alongside the same 8-megapixel sensor as the selfie camera in the Pixel 6 and 4GB of RAM.

At this point, I don’t actually believe there will be an Ultra Pixel or Pixel Ultra, but there’s a recent rumour that supports the theory.

In KubaWojciechowski’ss Pixel 7 and 7 Pro camera leak, there’s mention of an alleged third high-end 2022 Pixel. It will reportedly feature the same main shooter as the other two devices. Further, it will reportedly offer a secondary Sony IMX787 lens and an unannounced IMX712, alongside a 13-megapixel sensor for its selfie shooter.

I think the likelihood of a Pixel foldable appearing on October 6th is next to zero, but anything is possible. The rumoured device — reportedly codenamed Passport — has leaked multiple times over the years. Information about some of the device’s sensors also leaked back in July.

A recent report indicates Google’s foldable is still on track to release in 2023. It’s rumoured to support a ceramic body with a 2K flexible screen sporting a selfie camera and a 50-megapixel shooter with a periscope sensor. The handset will also reportedly come with the 2nd-generation of Google’s Tensor chip.

If we do see this mysterious foldable, it will likely only be a tease of some sort.