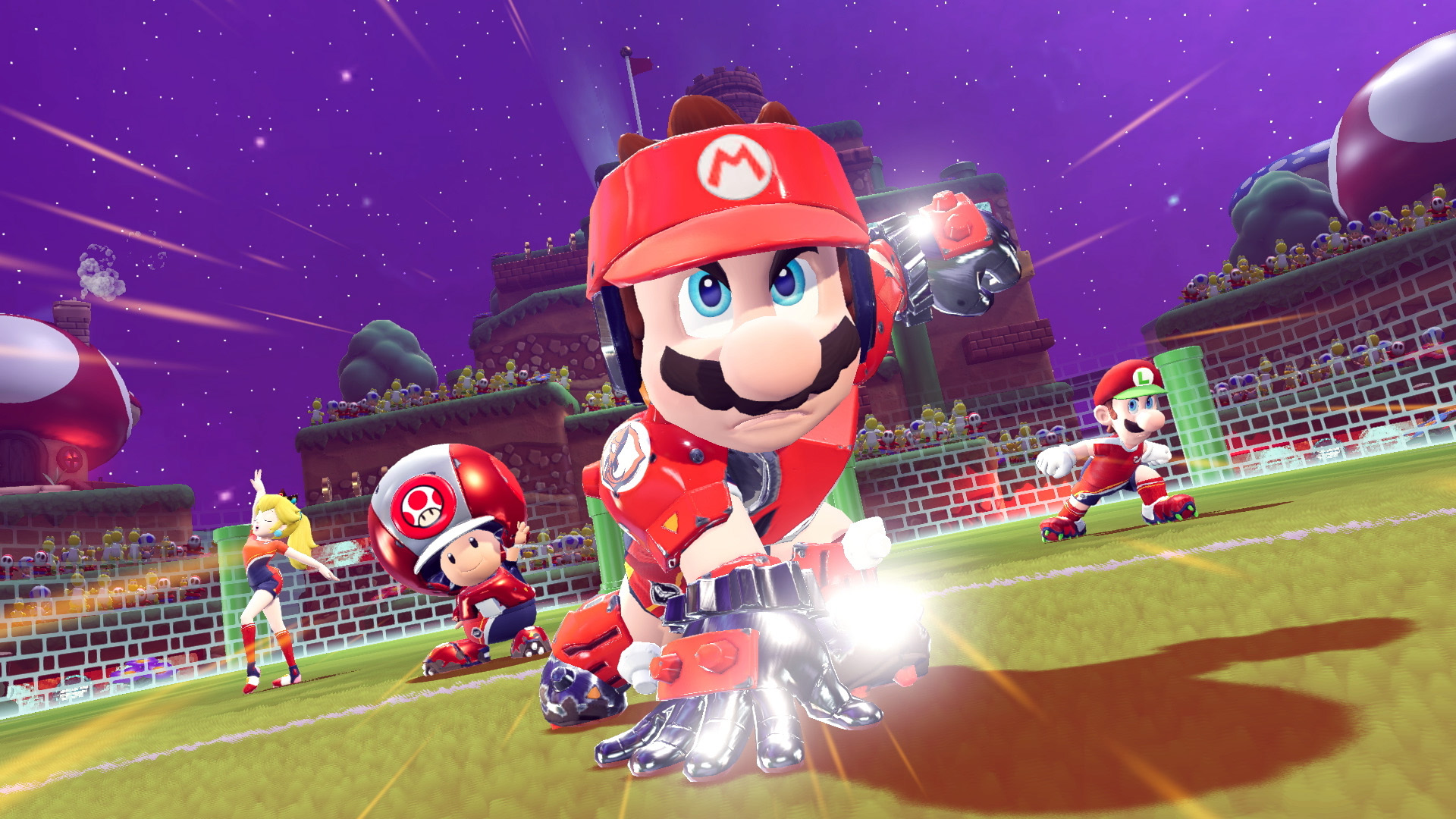 I’m surprised at how much fun I’ve had with Mario Strikers: Battle League, and, in fact, would go so far as to say that it might be my favourite Nintendo sports game yet.

But it does have several shortcomings.

Unfortunately, similar to Mario Tennis Aces and even Mario Golf: Super Rush at launch, Battle League is severely lacking in the content department.

In the same vein as its Wii predecessor, Mario Strikers Charged, Battle League offers arcade-focused, deceptively simple soccer gameplay — and when I use the word “arcade,” I really mean it. In Vancouver-based Next Level Games’ take on the beautiful game, you can literally tackle/bodycheck opponents, knocking them to the ground like it’s NHL Hitz 2003.

This is a strategy I’ve quickly leaned towards during my time with the game so far, resulting in Wario becoming my favourite character in Mario Striker‘s lineup. Mario’s nemesis is a ‘heavy’ that literally hits opponents with his rather large stomach, knocking them to the ground or into an arena’s electric fence. 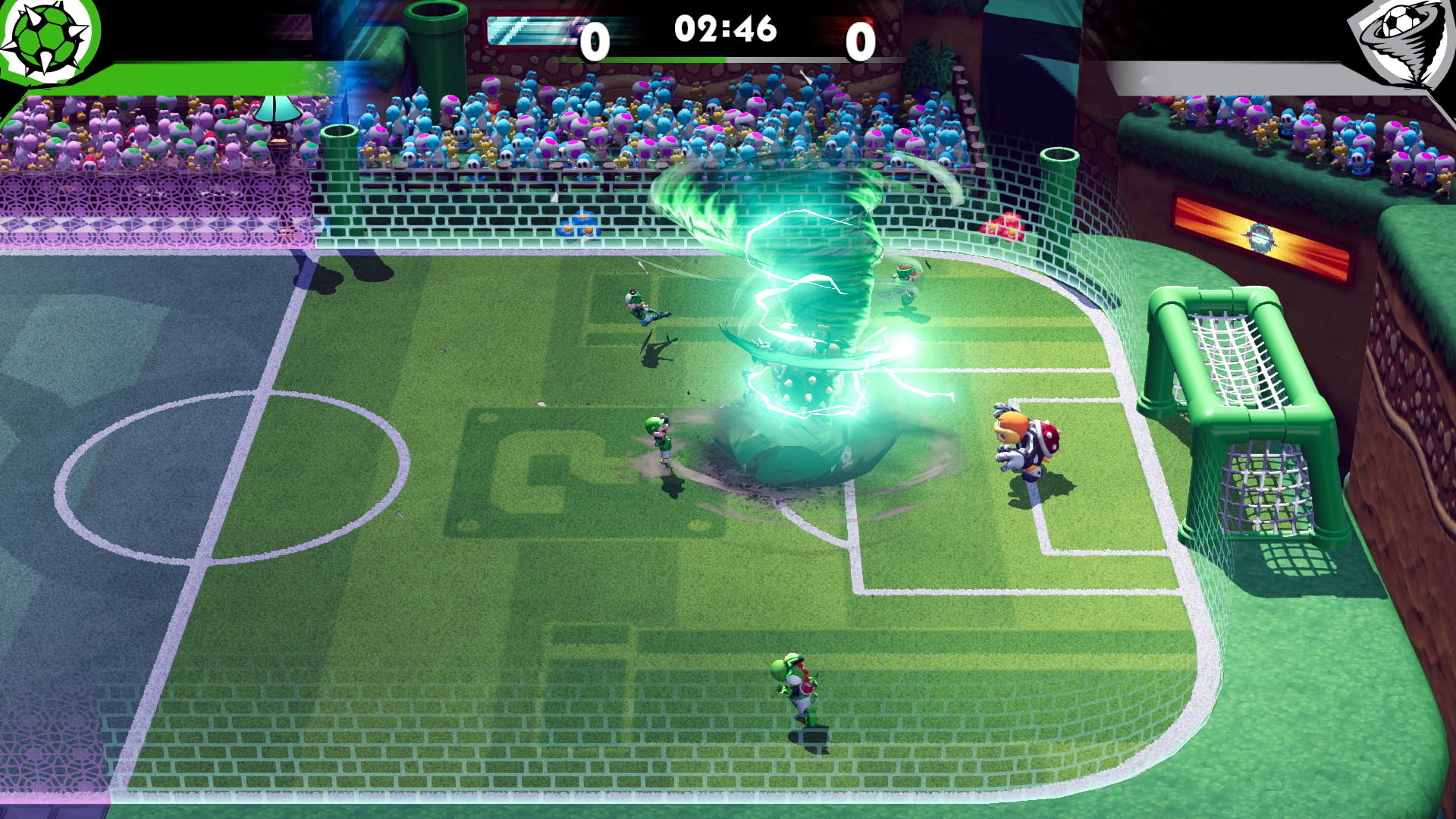 With this in mind, every character in Mario Strikers controls differently, though it might not seem like it at first. For example, Waluigi is speedy and great for breaking through a heavy defense line, while Mario and Luigi are relatively balanced when it comes to shooting, passing and speed. When playing through the game’s limited selection of single-player tournament ‘Cups,’ selecting the correct mix of characters capable of great passing, shooting, and, of course, hits, is integral to success.

As you earn coins by winning games and completing Cups, you’ll be able to buy new equipment for your squad that enhances their various stats. For example, if you like Toad’s speed, but aren’t fond of the fact that he gets knocked around like a rag doll on the pitch, just equip a ‘Muscle Helmet’ to increase his ‘Strength’ ability so he better suits your play style. Shifting to different equipment and characters based on the squad you’re up against is the only way to beat the game’s sometimes difficult AI opponents. 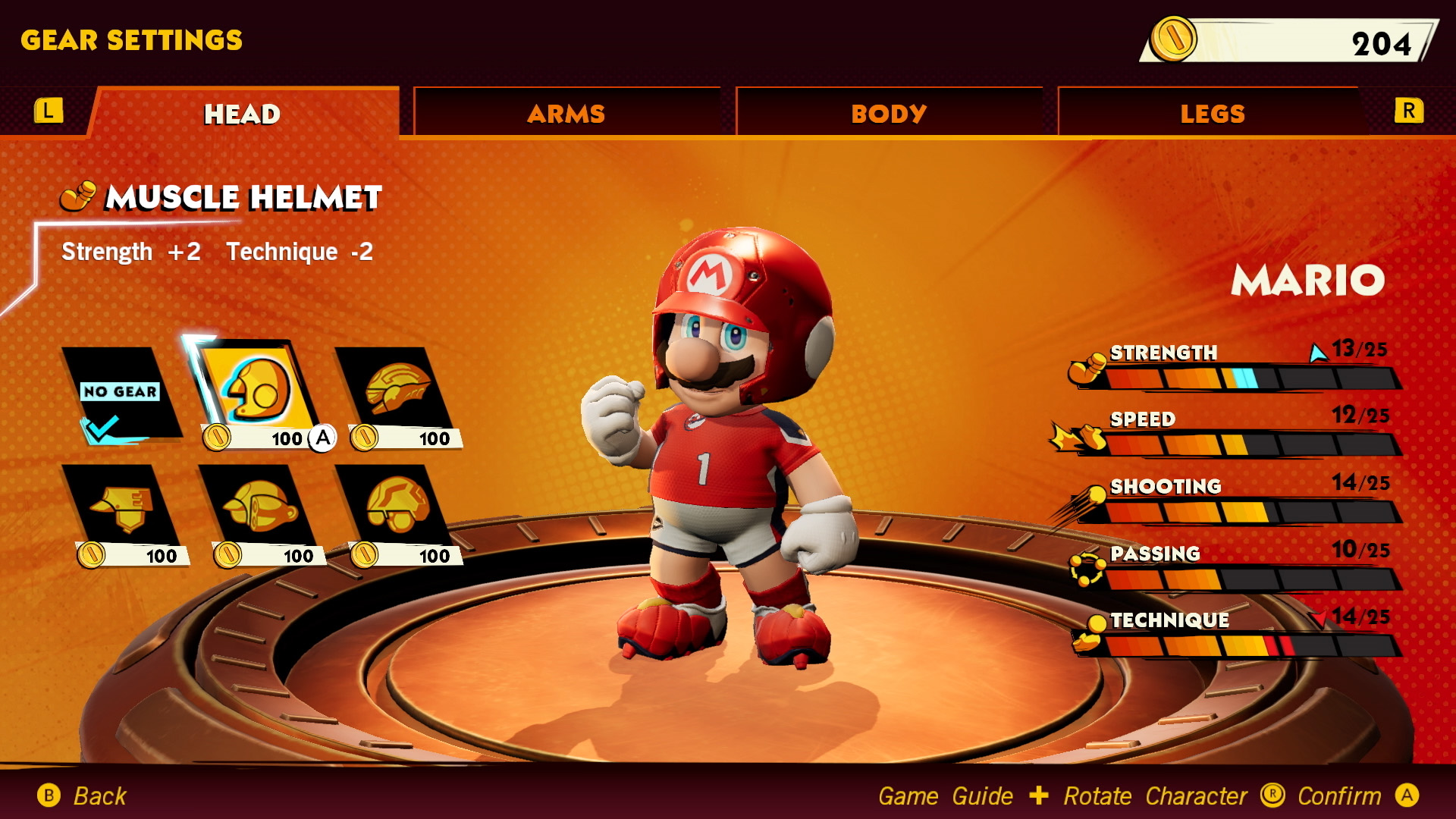 For example, the ‘Pipes’ team in Cup mode is full of heavies that body you around the field. This meant that my co-op partner and I needed to enter the match with an equally formidable squad of enforcers consisting of Wario, Donkey Kong, Bowser and, of course, Toad (we still needed at least a bit of speed).

It’s worth noting that Battle League‘s selection of characters is rather limited at launch, consisting only of Mario, Luigi, Bowser, Peach, Rosalina, Toad, Yoshi, Donkey Kong, Wario and, thankfully, Waluigi. It’s likely that more familiar Mushroom Kingdom characters are coming to the game in the future through free or possibly paid DLC, but the launch lineup is undeniably disappointing. 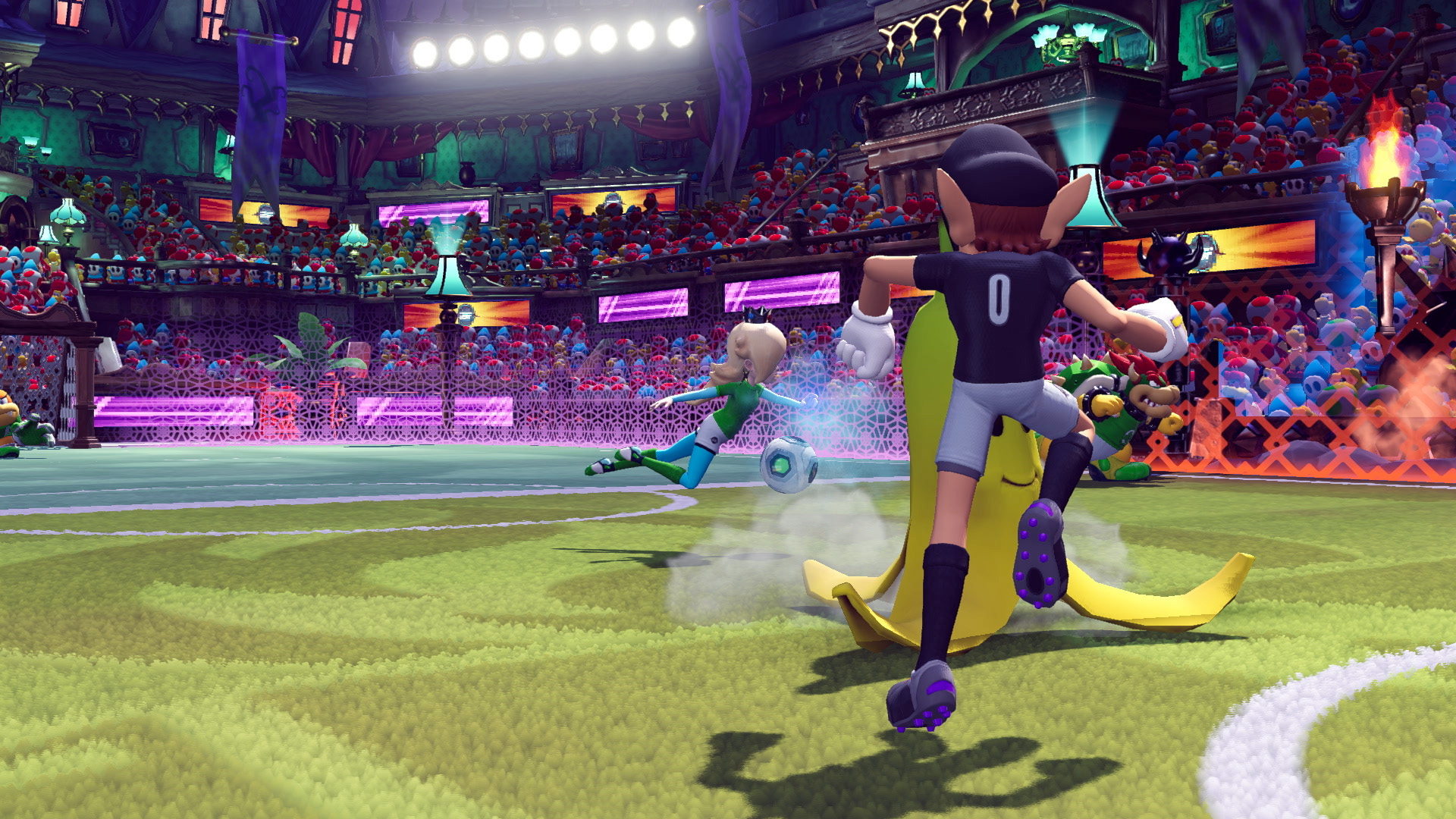 This is where the lack of content comes in. The core gameplay Mario Strikers: Battle League offers is extremely solid and fun. What at first seems like a parred-down take on soccer quickly reveals ample depth thanks to Mario Kart-like power-ups and unique anime-inspired ‘Hyper Strikes’ that net you two goals if you nail the timing correctly.

But unless you plan to create a club and play online, the single-player experience consists of just six Cups and unlocking equipment for various characters. Ranked club play sounds appealing in theory, especially if you plan to play with friends, but I haven’t been able to test it out because while online multiplayer is available ahead of release, there’s no one to play with yet. I plan to update this story with my thoughts on the Strikers Club mode following Battle League‘s release since it has the potential to be the title’s main draw.

In true Halo Infinite fashion, though, Mario Striker: Battle League‘s core gameplay is just too good to pass off, especially since it supports eight players offline in versus and four-player co-op for offline Cup battles.

Things can get a little hectic, especially when playing co-operatively on the same Switch with even just two people instead of a full team of four. This means you and your partner are controlling a team of four as two people, which can sometimes result in unpredictable character switches. Further, the player you’re controlling is only marked with a number, making it easy to lose track of who you are, especially during fast-paced games where both teams are wearing similar coloured jerseys. 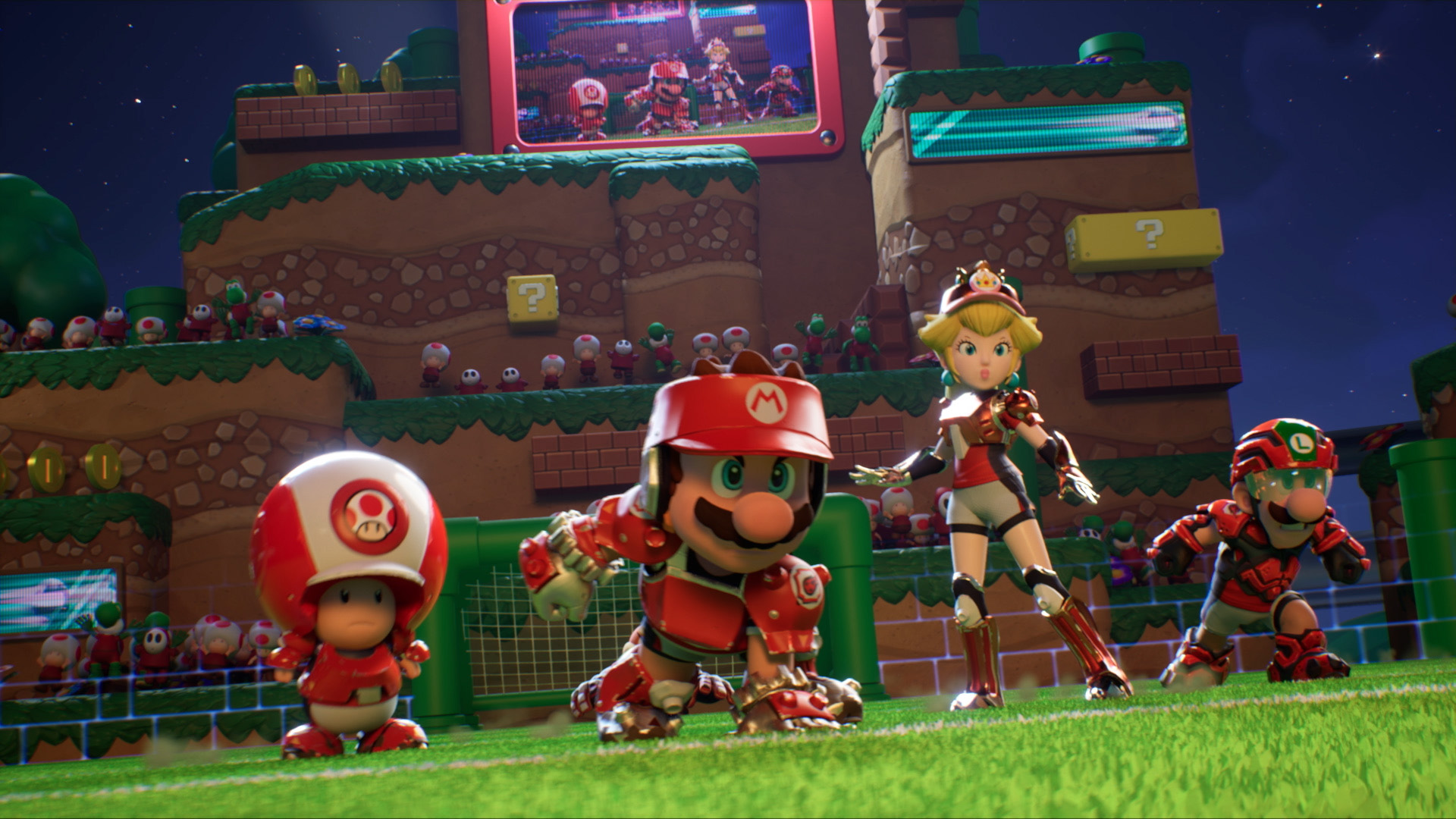 Finally, while the game’s various animations are entertaining, they can get repetitive very quickly. The first time I watched Wario produce a piece of garlic from who knows where, eat it and then burp, made me chuckle, but on the 50th watch, the sequence had long lost its appeal. After just a few hours with the game, I found myself skipping nearly every animation.

Still, Nintendo and Next Level Games are on to something with Mario Strikers: Battle League that could evolve into a competitive esport if the title’s online mode ends up being as great as it’s poised to be.

Mario Striker: Battle League is available June 10th for the Switch. You can order the game from Amazon, Best Buy or GameStop for $79.99.