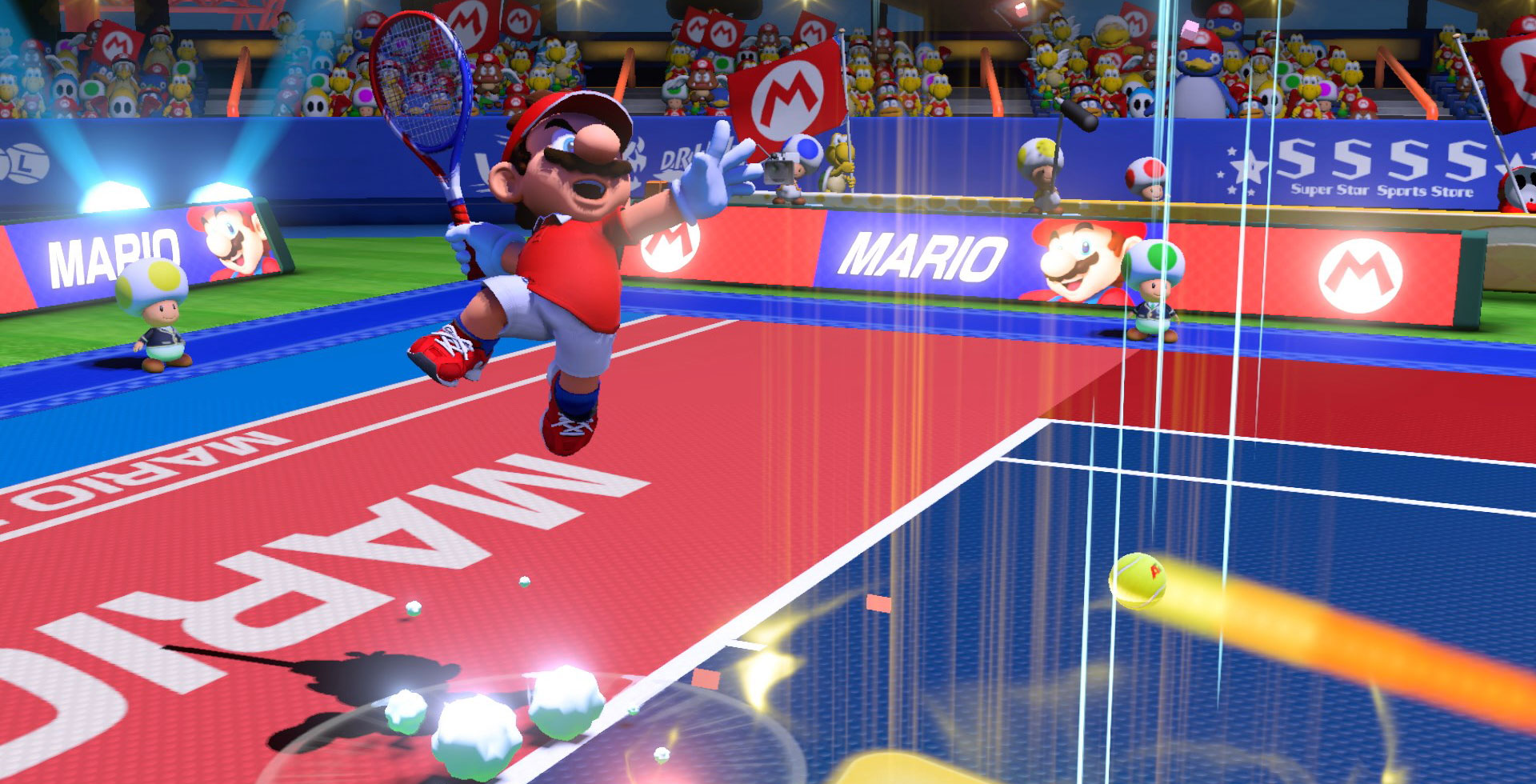 Those hoping Mario Tennis Aces would be a return to the series’ lighthearted, quirky Game Boy Color and Game Boy Advance RPG titles, will be disappointed in Nintendo’s latest entry in the long-running franchise.

While Mario Tennis does feature light RPG elements, upgrading Mario over the course of the game’s lacklustre and often-frustrating Adventure mode is neither satisfying, nor does it seem to actually significantly alter Mario’s performance on the court.

There really seems to be no real noticable difference between controlling Mario at level 1 and then later in the game, at level 20.

That said, there is still a lot to like about Mario Tennis Aces despite its disappointing single-player mode, especially if you’re a fan of local multiplayer, which is back and better than ever, and complete with unnecessary but still fun Wii Sports-inspired motion controls.

Mario Tennis Aces’ gameplay is balanced and each of the game’s 16 characters, ranging from franchise mainstays like the ghastly Boo, to a strong looking Princess Daisy, and even the strangest Nintendo character ever, Waluigi, are fluid and play decidedly different from one another. Also, Spike, a Koopa enemy from 1988’s Super Mario Bros. 3 and various Mario Party titles over the years, is now in Mario Tennis — he keeps tennis balls in his mouth, which is incredibly unsanitary. 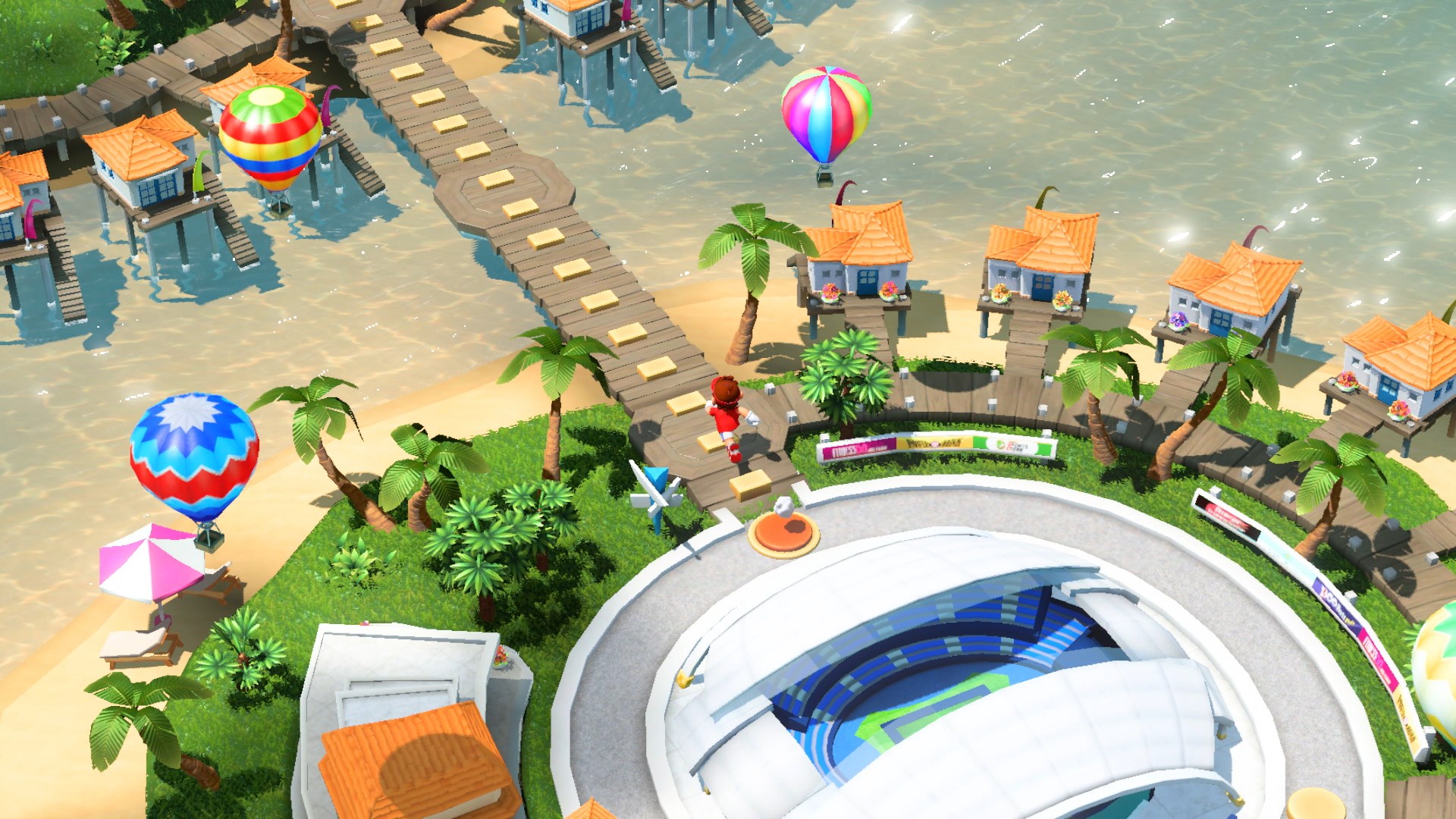 Each type of character, whether it’s Bowser’s shot strength or Toad’s speed and ability to quickly execute trick shots, include their own strengths and weaknesses. Those new to the series, as well as fans who have enjoyed the Mario Tennis franchise for years, will quickly figure out what their favourite characters are with a little experimentation.

There’s also a significant amount of strategy to Mario Tennis Aces’ gameplay, making the Tennis title feel more like a fighting game than a traditional sports title at times.

For example, while typical tennis swings like lobs and drop shots are a big part of Aces, the game also features high-speed ‘Zone Shots’ and ‘Star Shots’ that can only be activated after the player fills up a special meter by powering up their swings during a rally. You can also more quickly fill your special meter by properly executing trick moves, as well as by returning shots when standing in Stars that appear in different areas of the court, adding yet another level of strategy to the game. 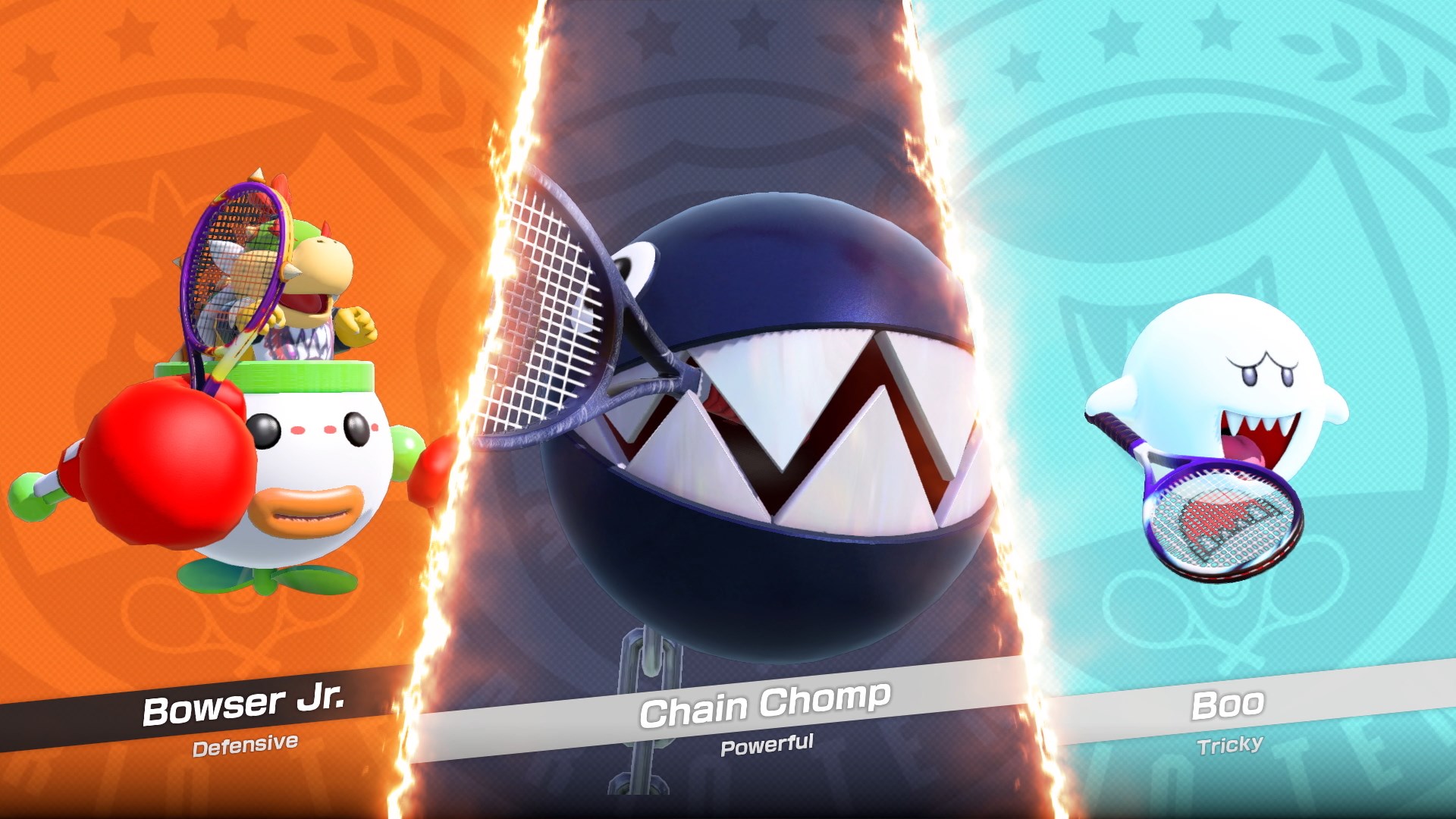 If your special meter isn’t full enough for a Zone or Star Shot, you can also use it to slow down time in order to reach particularly difficult returns. I found this strategy especially useful online when playing against skilled opponents that were far better then myself. Getting a few extra milliseconds by taking advantage of Aces’ special meter in a way actually helps level the playing field a bit.

Zone and Star Shots are capable of destroying your opponent’s racket if the ball isn’t returned with the correct timing. Since each player only has a limited number of rackets at their disposal, it’s possible to ‘K.O’ your foe by breaking every one they have at their disposal.

This is a surprisingly a viable strategy in Mario Tennis Aces — especially during competitive online tournaments — that goes along way towards making Aces feel like it’s more than just an arcade tennis game. 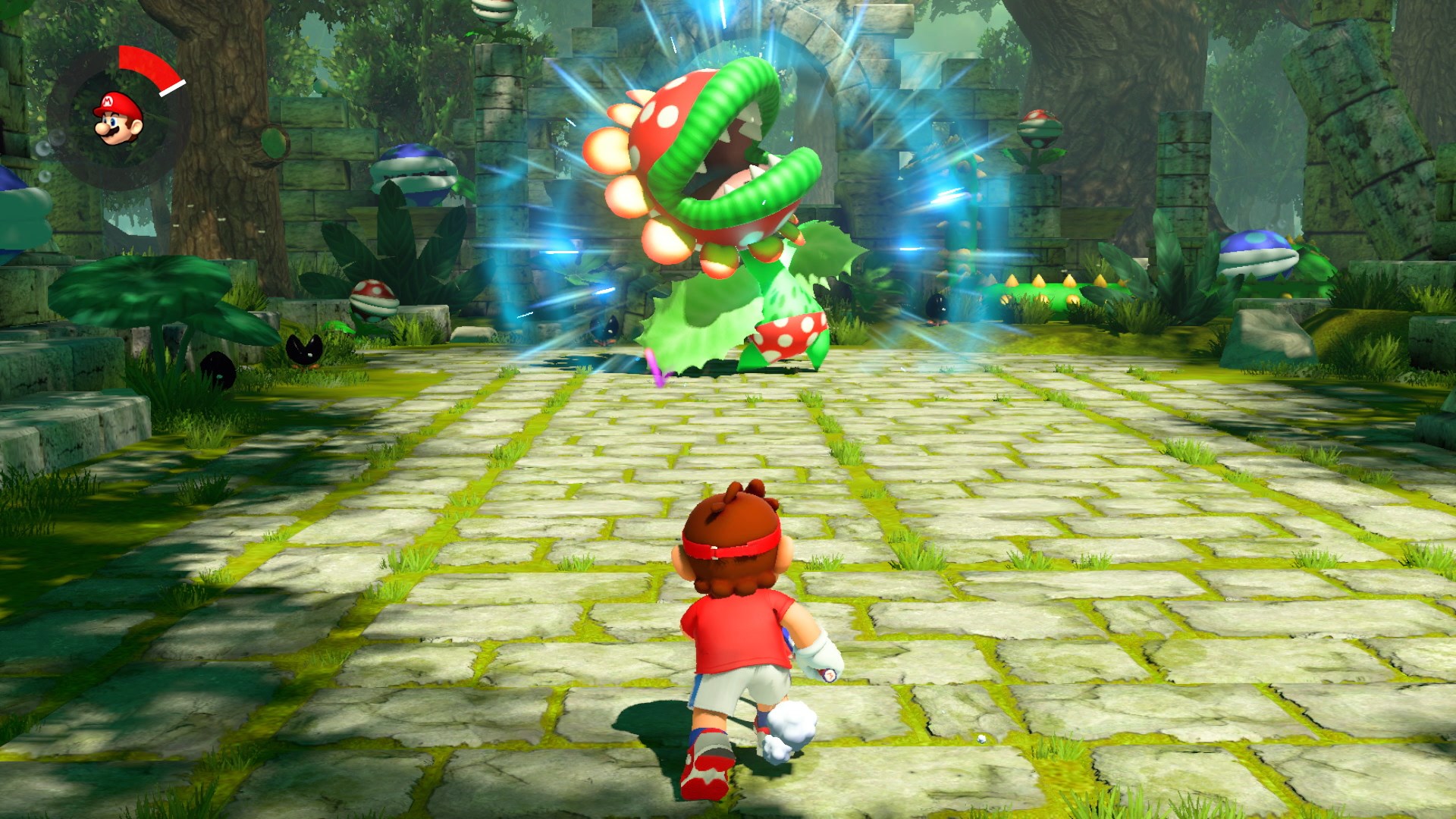 Still, when you’re on the receiving end of a Star shot during a hard fought match, losing to a broken rocket feels cheap. Your excellent returns, timing and tricky drop shots no longer matter, with the entire match coming down to a slow-motion, first-person Zone projectile you didn’t quite nail the return timing for.

Mario Tennis Aces’ brief, roughly three hour singleplayer Adventure mode on the other hand, leaves a lot to be desired. While it has its moments and the idea of including a traditional overworld in a Mario Tennis game is great fan service, the difficulty is unbalanced and at times almost Dark Souls-like.

Take a look at every stage included in the game’s haunted house mirror world and you’ll quickly realize exactly what I’m talking about. The Adventure Mode is a great way to learn the game’s various intricacies though, especially if you’re goal is to be competitive online. 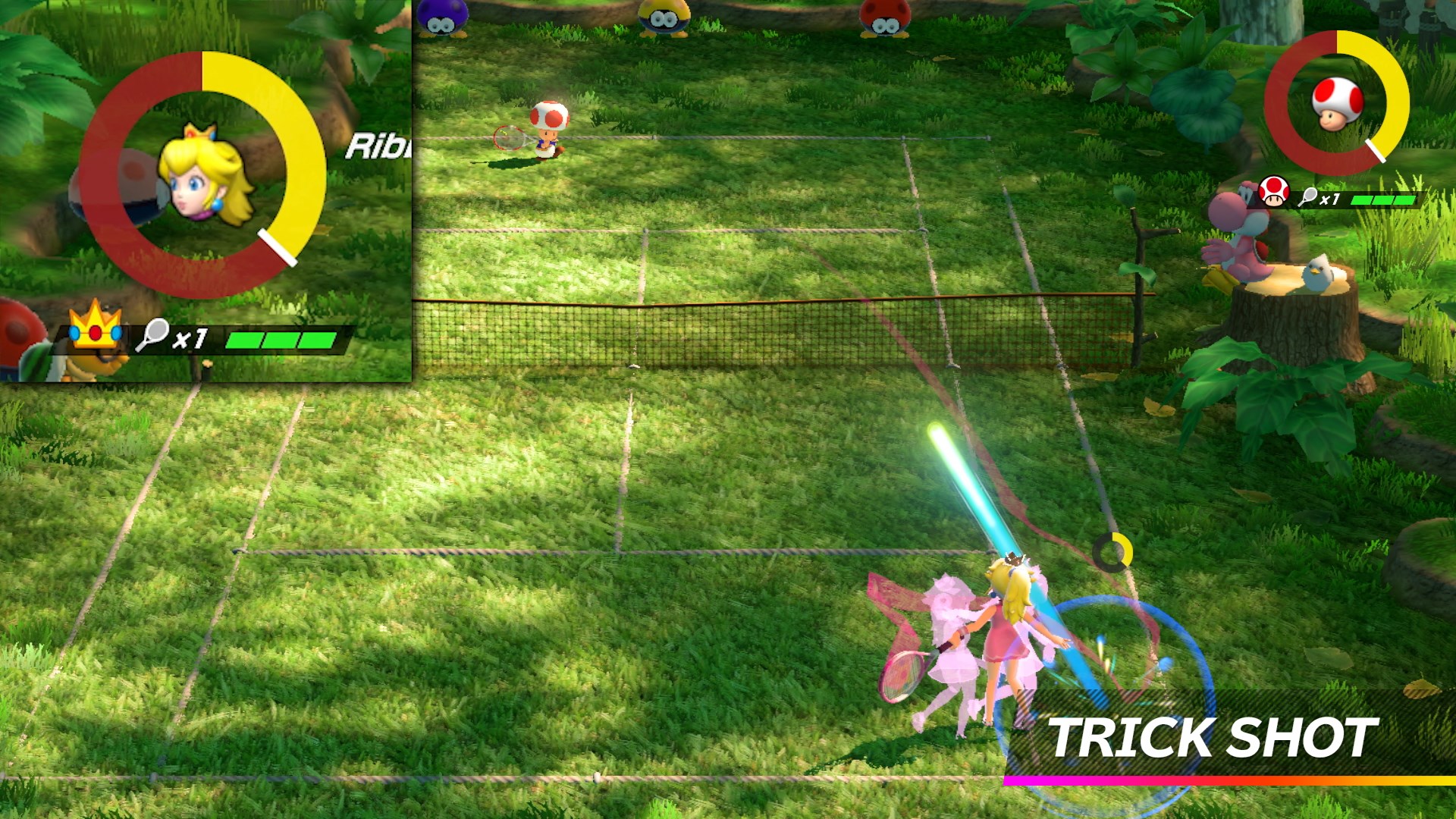 On the graphical side of things, Mario Tennis Aces looks great, whether playing in docked or undocked mode, complete with colourful flourishes designed to allow the player to easily identify what shot they’re receiving, or returning.

If online and local multiplayer isn’t something you’re interested in, Mario Tennis Aces really won’t have a lot to offer you. On the other hand, if you’ve enjoyed Nintendo’s other multiplayer Switch games, like Arms or Splatoon 2, for example, then Aces could be the perfect pick-up-and-play, but difficult to master summer title.