Patrick Naud on the "Go" series, the free-to-play model and the future of the studio 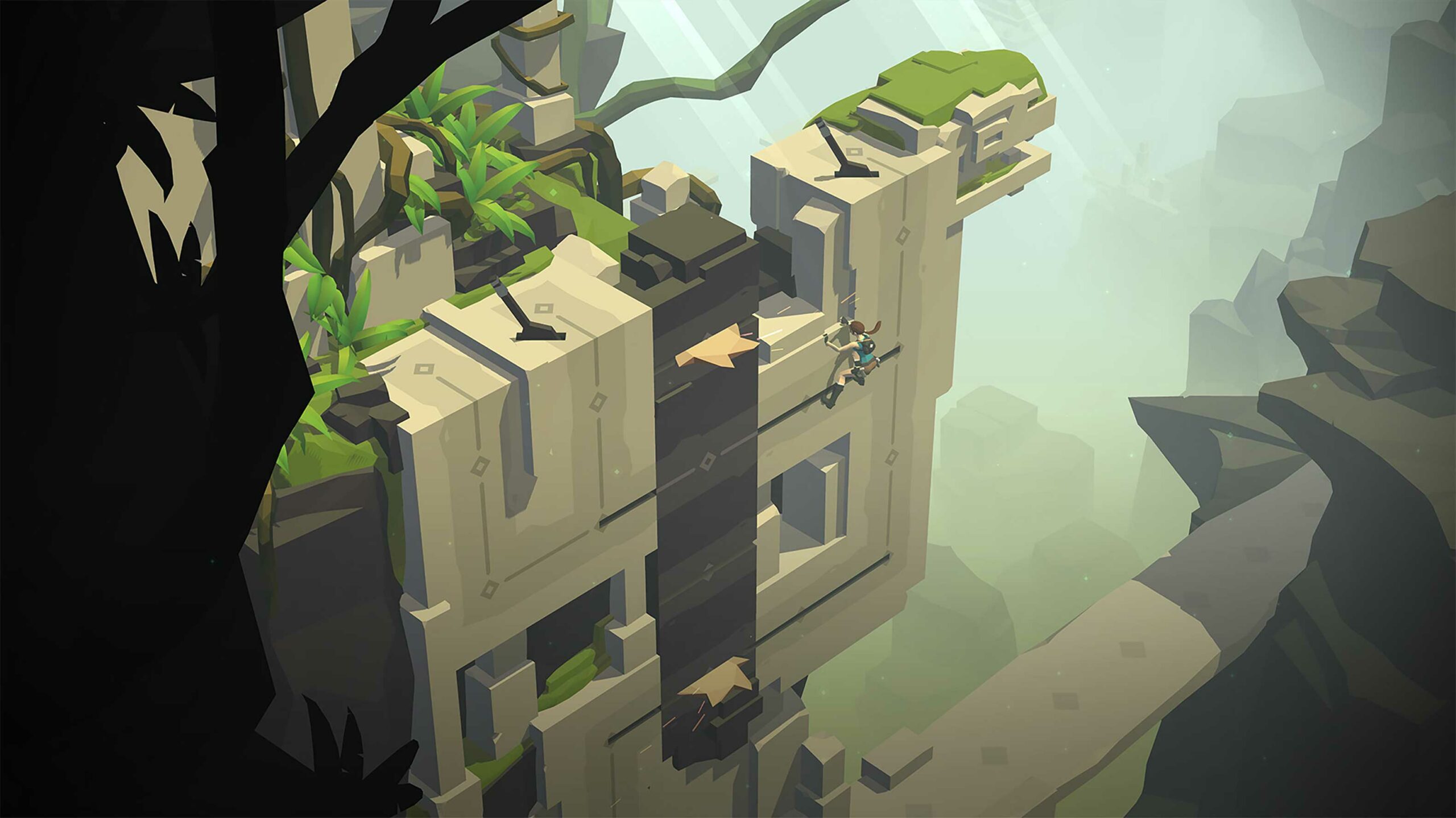 For good reason: the Canadian developer took iconic properties like Tomb Raider, Hitman and Deus Ex and cleverly designed high-quality, premium “Go” smartphone experiences around them. Now, as the studio celebrates its 10th anniversary, it’s marking the new era with a shift to a free-to-play model in response to the market.

Here's to another decade of crafting great games with even greater people! pic.twitter.com/8WQkndZuyC

“It’s interesting because mobile has drastically changed in the last 10 years. If you look at the industry 10 years ago, it was still somewhat in its infancy. It was the beginning of free-to-play, we had a lot of premium titles out there,” says Patrick Naud, head of Square Enix Montreal. “But there were also a lot more different types of games — a lot more people experimenting with new gameplay, trying to see what would work well on mobile. Lots of new fresh experiences that we had a lot more than years ago than today, where I feel that we always see the same three or four art directions with three or four different gameplay [types].” 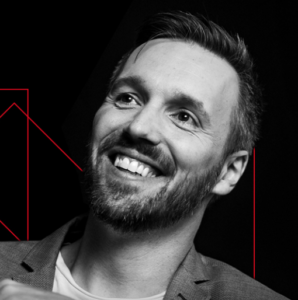 examples of, as Naud puts it, “experimenting” in the mobile space. Looking back on them, Naud says he’s proud of the work that the team did with them.

“How can we take a great IP that people know of and how can we retain the essence of this IP while making an amazing mobile experience that actually respects the tropes of the IP? In doing so, we also realized that despite the platform, everyone is looking for great quality games, everyone is looking for fresh new takes, fresh new experiences, and that has been the foundation of what we will do in the future after Hitman Go, and what we’re still going at doing these days,” he says.

Adapting to the market changes

However, Naud is also acutely aware that the current nature of the mobile space means it’s now very difficult to find success with premium titles instead of free-to-play ones. While he says the “goal is still to craft amazing experiences,” he acknowledges that “the premium titles represent a smaller and smaller and smaller part” of the mobile market.

That said, he sees the shift to free-to-play as a way to bring in even more people to the studio’s games.

“As we put a lot of effort in crafting these amazing experiences, we want to make sure that they are accessible to as many users as possible. That’s why we embrace free-to-play — we embrace that so everyone has access to our great games, the games that we’ve crafted with love,” he says. “So that won’t change — we just want to make sure that these games are available to as many users as possible, everywhere around the world.”

As it so happens, he says Square Enix Montreal’s work on Hitman Sniper actually helped the team prepare for a shift to a free-to-play model. He notes that the game operated like a free-to-play live service with seasonal events for Halloween, Christmas and the like, through which the team learned a great deal.

“We saw with every monthly event that we brought in new users — we brought in new players. So we learned the service aspect of free-to-play by doing it with Hitman Sniper,” he explains. “We started looking at how people were playing the game and where were they challenged and where were people dropping off, and what we can do to just help them stay in the game longer.”

These “little learnings,” he says, have carried over to the studio’s next game, Hitman Sniper: The Shadows, a spiritual successor to the 2015 original. The Shadows features similar gameplay — players will have to scope out distant areas to manipulate the environment and pick off targets — but it also has an original story focused on five highly-skilled assassins. Diana Burnwood, the handler of Hitman series protagonist Agent 47, oversees the group.

He says the team holds regular meetings to discuss to share feedback and iterate on its approach to free-to-play.

While we have an idea of what to expect from a new Hitman Sniper, Square Enix Montreal’s second confirmed upcoming project, an untiled Space Invaders game, remains more mysterious. Developed in collaboration with Tokyo-based Taito, the Space Invaders experience will be a camera-based AR game rather than a location-based one like Pokémon Go. Naud was tight-lipped when pressed for more details, but he did briefly talk about what it’s liking to work on such an iconic property.

“It’s been an amazing experience because, as I mentioned, our focus is to craft new experiences — craft the game that no one has played before. So when we looked at what we could do with the IP, the love that we have for the IP, we thought about, “how can we make it our own?” he says. “This is what led us to craft an experience that no one has played. It’s an honour to be able to work on such a legendary IP.”

While increasing demand for free-to-play titles marks the biggest shake-up in the mobile space, there have been some other notable shakeups. One of these is the relatively nascent Netflix-esque subscription services Apple Arcade and Google Play Pass. By charging a paid monthly subscription, they do away with in-app monetization models like microtransactions or ads. While Naud didn’t completely rule out Square Enix Montreal ever releasing a game on one of these services, he notes that they don’t support the studio’s aforementioned goal of reaching more players.

“We have experience with some of these platforms, some of these ‘all-you-can-eat’ platform subscription platforms, but [they’re] still a very small part of the ecosystem,” he says. “Let’s just say that Google Play and the Apple App Store are, by far, where we’re going to be putting the most of our effort because this is where our players are.” 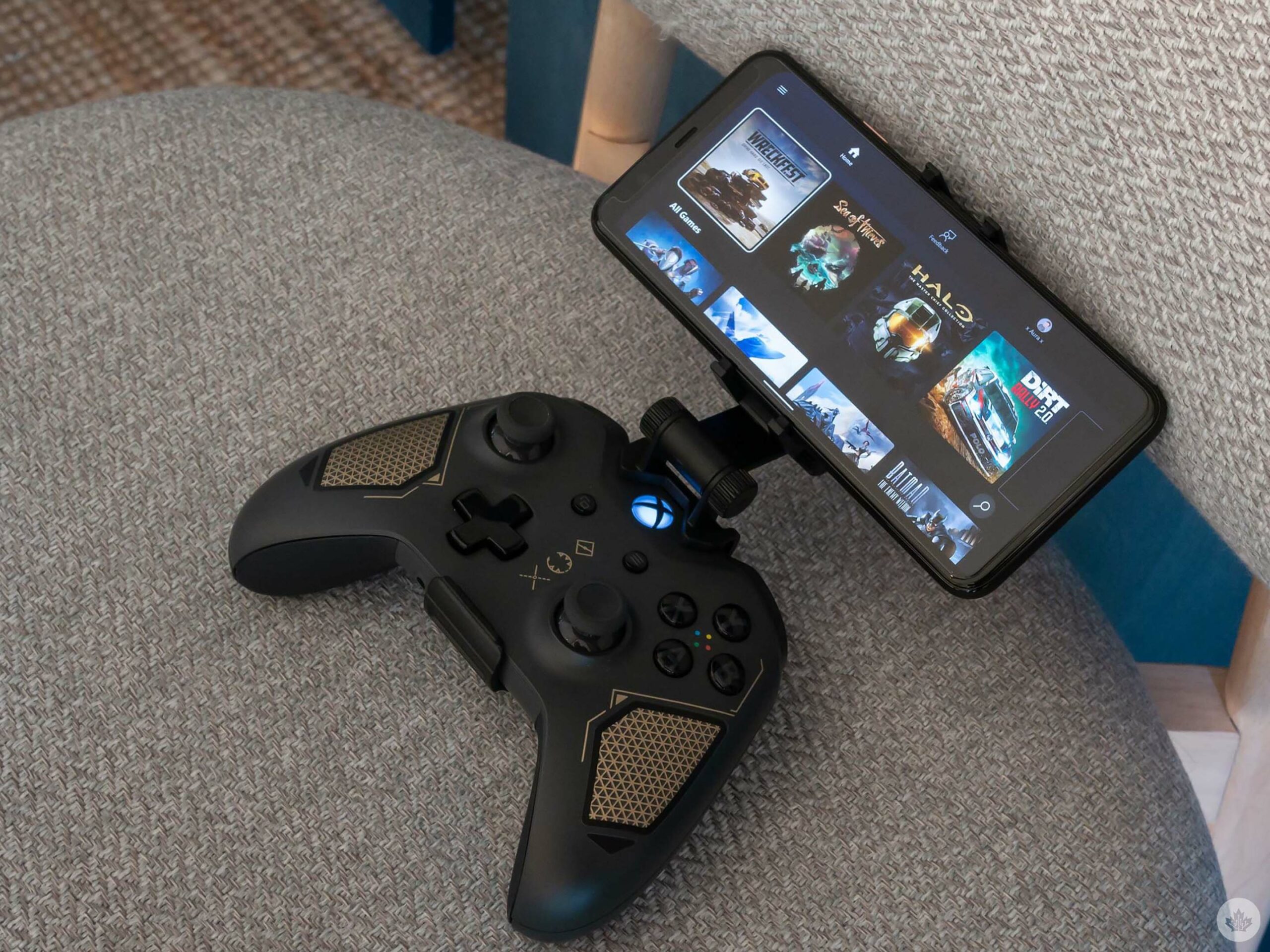 More companies now are also leveraging streaming technology to bring high-quality games, be it Google Stadia or Xbox Cloud Gaming. This allows console and PC titles to be playable on phones or tablets that otherwise wouldn’t be able to run them natively, and they even often get mobile-optimized “touch controls” for a smoother transition to the smaller screen.

For Naud, these streaming services are only a good thing.

“I see this obviously becoming a growing trend, but also, [I] see the fact that year after year, our players are expecting better and better. And this is great because it’ll help raise the bar — it will help make sure that our players have an even better potential experience,” he says. “Making it that there’s even going to be more native, mobile native players having mobile as their primary device — I see this as amazing for the mobile industry because it’ll just bring more people to it, and people that want to play core experiences. So as a player, and as a developer, I only see a lot of positives.”

With all of that in mind, it begs the question: will Square Enix Montreal ever return to the premium world of the Go series?

“Never say never,” Naud responds. “But when we decided to go into the free-to-play space, we asked our teams what they wanted to do, and four years ago, there were a lot of people who just said, ‘we’ve done it, we’ve successfully done it.’ So people wanted to take a break from that genre and experiment with other genres. I’m not saying that we won’t ever go back, but that’s not the focus, short-term.” 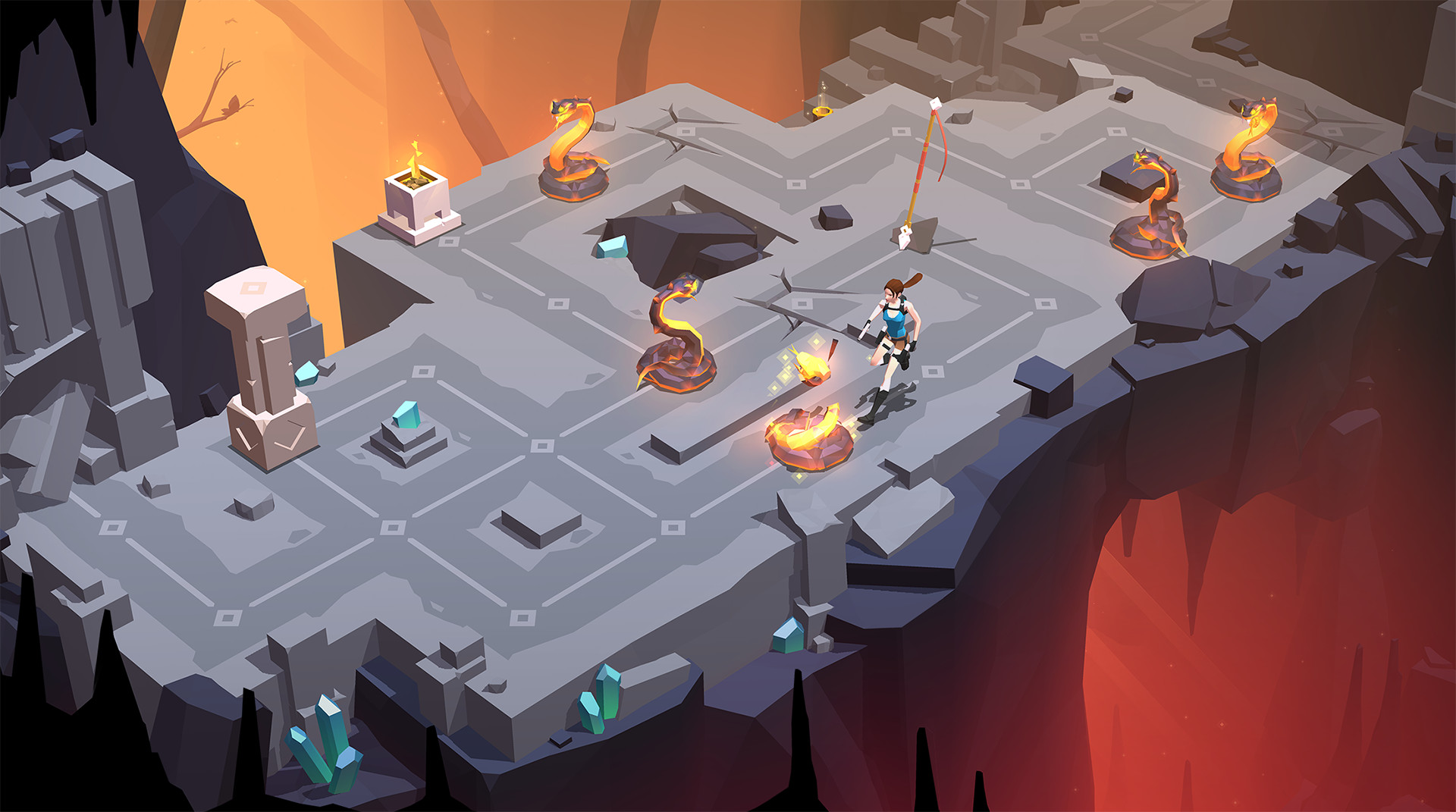 Similarly, he doesn’t rule out ever making a console or PC game — he notes that the studio was originally tasked many years ago with making a “next-gen” Hitman for the PS4 before that ultimately became Hitman Go — but it’s not a focus for the studio.

“In the short term, we’re finishing our first generation of mobile-friendly games. So that’s been our focus, and this is what I’m focusing on. And I want to make sure that we are able to release and operate these games, and [continue to] operate these games for years to come,” he says. “So that’s the main focus for now. And all the learnings that we’ve done, from free-to-play to mobile to operating our games, can be used for a lot of different things, but our focus right now is mobile.”

Looking back to look ahead

In an industry that’s decidedly quite secretive, Square Enix Montreal employees are regularly sharing positive anecdotes of their time working at the studio. This, undoubtedly, helped the team recently be named one of the ‘Best Places to Work’ in Canada by GamesIndustry.Biz. The studio, alongside fellow Montreal developers Ludia and Gameloft, also regularly runs events like ‘Next Lev’Elles’ to amplify the voices of women in the industry.

For Naud, he attributes this to the studio “having smaller teams of very passionate individuals” who can work on multiple projects.

🥳 Almost a year ago we launched our Magic Mondays; a permanent (and magical!) perk of working at Square Enix Montréal.

Here's how our team does with every second Monday off (2 long weekends a month!) How would you spend your Magic Mondays? pic.twitter.com/LYt8X3HNVp

“You are making a game on a day-to-day basis — you feel like you’re making a game, not making tasks. And it’s one of the [points of] pride we have: even if we’ve grown — we’re a little bit over 170 [people] right now — we want to keep that feeling of ‘everyone’s contributing to making games.’ And I think our social media’s also there to reflect the fact that people are having fun at Square Enix Montreal. We still believe that we’re making games — we should be having fun making them.”

He credits the team for making the transition to using its “DNA of great console developers” and applying that to mobile. “I’m very proud of the people that had that passion of making it work and wanting to craft these fresh, new mobile experiences.”

He says all of this is invaluable going into the future of the studio. 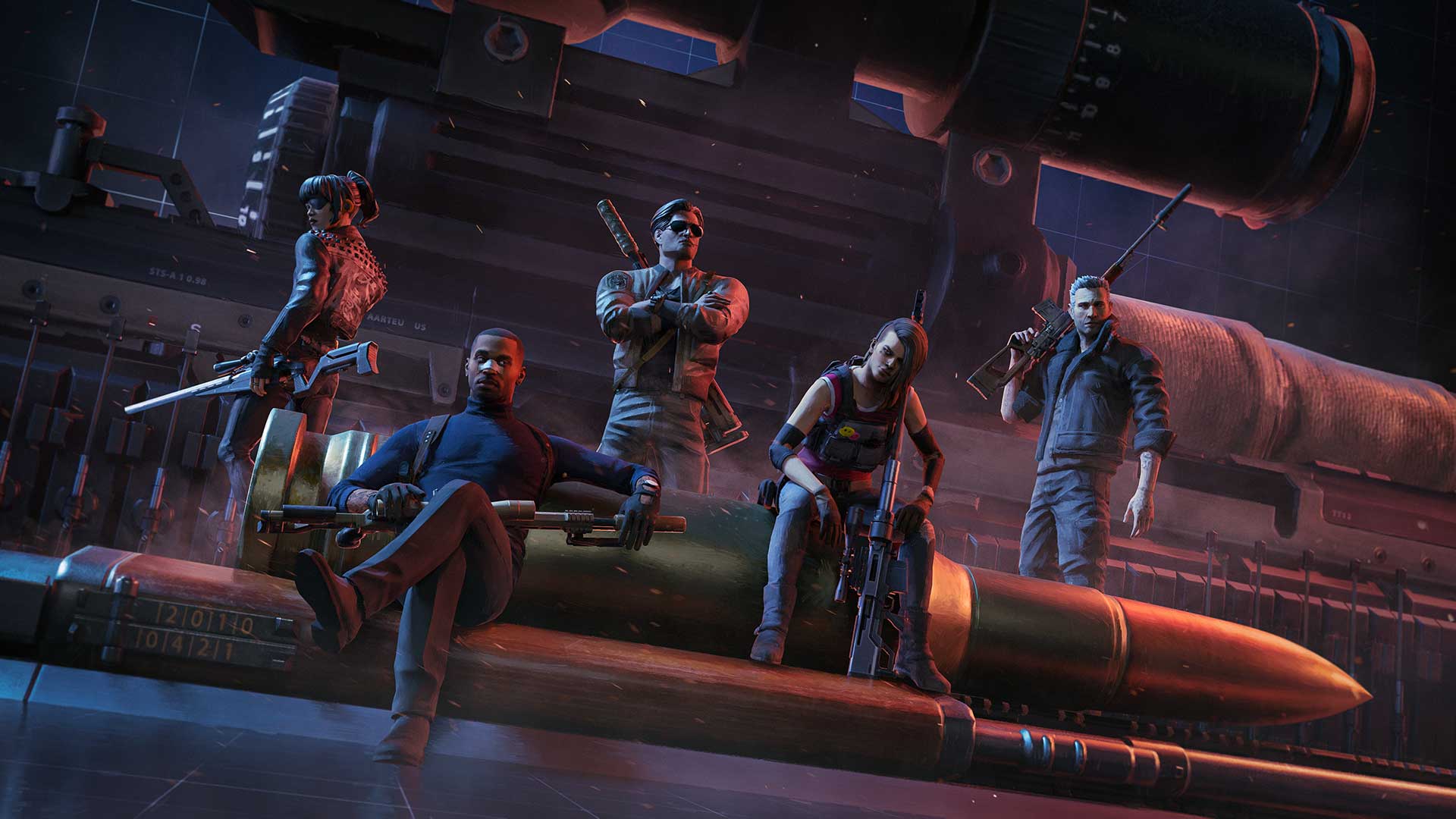 “And now, we’re at a point where we’re at a second big achievement of taking all the learnings that we’ve done in the mobile space, taking our amazing DNA, and crafting new experiences for mobile that are going to feel fresh, are going to feel different. They’re not alike,” he says.

“When you will be able to look at Hitman Sniper and what we’re doing with Space Invaders — [they’re] two completely different experiences. But we had two teams that were extremely passionate about that genre, about wanting to make great games, so they’re going to be very different, they’re going to be successful on their own. And they’re going to be two games that people have never played before — this is the biggest focus that we have at the studio.”