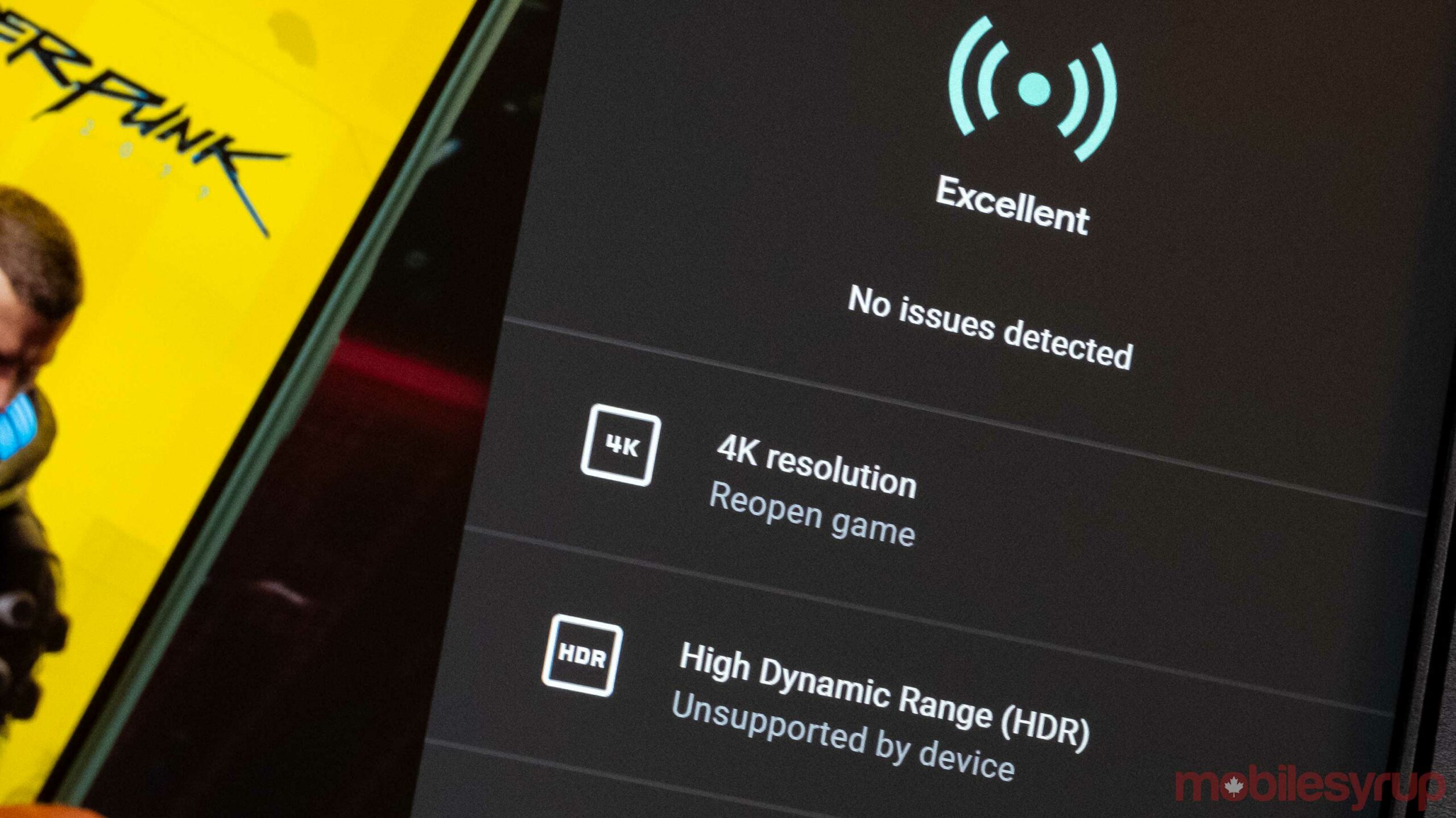 It appears that Cyberpunk 2077 players on Google Stadia are overloading Google’s servers and forcing the game to run at 1080p instead of 4K.

MobileSyrup has reached out to Google for more information regarding the issue, but for now, the cause is speculated to be too many users playing the same game at once.

The glitch is present on both the Chromecast Ultra and PC via the Chrome browser. When you open the Stadia menu while playing a game, you’ll see “Reopen game” under the 4K option in the connection settings. Regardless of how many times you reopen the game, it won’t go past 1080p or remove the “Reopen game” wording from the menu.  A Stadia founder on the Community forums summarises the issue succinctly.

Looking online, you can find similar reports on Reddit and the GitHub page for popular third-party Stadia tool ‘Stadia Enhanced.’

Many people who have this issue can play their other games in 4K, which further suggests that this has something to do with the number of servers Google has available for Cyberpunk 2077. One user even mentions getting Cyberpunk 2077 to play in 4K with a VPN, suggesting that this is a regional issue.

What’s interesting about this problem is that since Stadia can play other games like Watchdogs: Legions and Immortals: Fenix Rising in 4K, it doesn’t seem like the influx of Cyberpunk players are affecting the entire Stadia platform.

Hopefully, Google will respond with a fix for this issue because if every major game launch overloads certain regions around the world, it may turn some people away from the other strengths cloud gaming offers.

Update 17/12/2020: A user in the Stadia Community forms has uncovered a somewhat bootleg way to fix this issue on PC. It’s unclear if using a similar VPN method will also work with the Chromecast Ultra.

The fix works as follows:

Update 16/12/2020: Google sent MobileSyrup the following explanation regarding the issue:

“During times of extraordinarily high usage, you may experience a brief dip in connectivity, causing your gameplay session to end. This is temporary, isolated to a single title and caused by an exceptionally high volume of gamers connecting to your local data center, which may subsequently route your gameplay to a location further away. When this happens, your connection time might increase beyond our threshold. With this being said, I kindly ask that you try connecting again in a few minutes as the situation should self-resolve as sessions open up.”

The above solution did not work in our testing. Nor was it related to our issue since the ‘Reopen game’ bug persists constantly for days.

When asked for more information, Google responded to MobileSyrup, stating that no one on the Stadia team could comment on the resolution problem at this time.

At the time of this update, Cyberpunk 2077’s resolution issue is still present.